Only God Forgives : Movie Review
5 stars out of 5 (Masterpiece)
Writer-Director : Nicolas Winding Refn
English, 2013
That Thailand never came under foreign rule has little to do with its nationalist resilience and more to do with the reluctant compromise brokered by competing colonials.Writer-Director Nicholas Winding Refn, when basking in Thailand, might have thought - What if the blithely marauding Westerners actually encountered a native force that blew away each and every one of them ? What if I set this premise in modern Bangkok and re-employ my trademarks of seductive narrative style and bursts of stylized graphic violence ?
The realized result is a modern masterpiece : a movie that is Thailand refracted through Scandinavia temperamentally and visually. Designed as a series of violent face-offs between a group of foreigners and a top-cop in the badlands of Bangkok, this is a story that moves like poetry, with remarkable characters and highly unusual situations. Languid visual flow is punctuated by ultra-violent orgies, as mood-enhancing musical undertow often eases our immersion. If you thought Refn's previous "Drive" was an exemplary fusion of the art movie and the action flick, wait till you witness "Only God Forgives" which amps up all those elements into a still more superior orchestration of pure film-making.
Pic's opening slowly descends into hell when Billy, a young American drug dealer living in Bangkok, prowls the night to satisfy his criminal perversion and ends up raping and brutally murdering a girl who's barely in her teens. That brings a middle-aged top cop - Chang (Vithaya Pansringarm) -  into the fray. That same night, the latter dispenses justice to multiple parties in a way that is equally savage. Billy's brother Julian (Ryan Gosling) hears of this whole horror story and decides not to take revenge. But his mother Crystal (Kristin Scott Thomas) flies in from the USA, seething. An embittered and fiercely dangerous woman, she recruits the local goons - both European and Thai - in finishing off Chang. But she never realizes the nature and power of the man she seeks to kill. By the times she does, it is ... 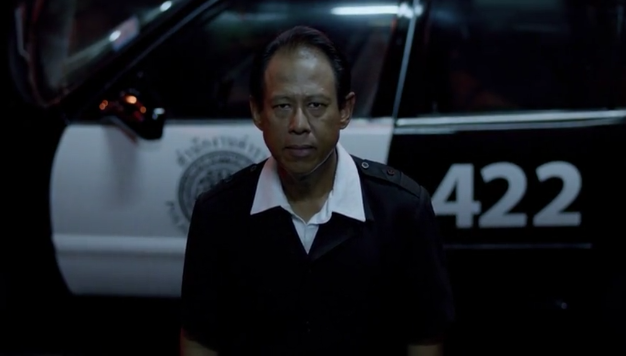 Refn uses the 90 minute runtime as a series of lyrical small steps between bigger scenes that are lavishly set-up like theatre extravaganzas. And each of these major set-pieces are themselves composed of unexpected progressions conducted with clean flourish. One may initially feel the brief runtime is too short for the movie's own good, but one progressively realizes that this is a movie that breathes and soars in the moment, and not by its overall length.
The stark colours of Bangkok's red light districts probably seem to have served as an inspired nidus ; a starting point, to Cinematographer Larry Smith who layers and frames Bangkok in a style never seen before. Smith de-clutters his canvas, carefully chooses mise en scene, often makes the tones starker, and consistently achieves cool refreshing levels of colour saturation. The backdoors of the boxing arena and the boudoirs - both places associated with carnage of different kinds - darkly bathe in pools of red gold orange and black. Enhanced by Beth Mickle's inspired production design, a formal dinner-table scene involving Ryan, his mother, and his girlfriend is a magnificent masterpiece of colour and form. 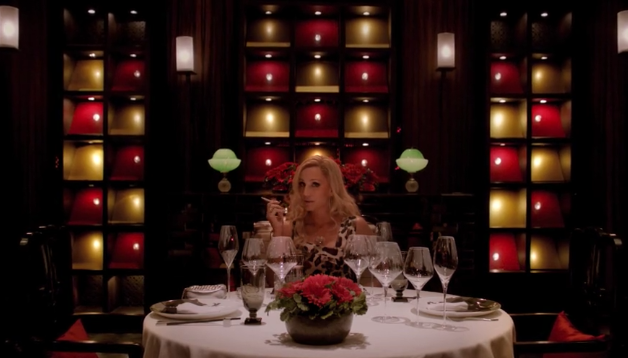 At the other end of the spectrum, a foray into a garage - a cavernous commercial one - again discloses a striking visual aesthetic, with the floors completely swept clean of any object while the walls are heavily festooned with hardware. Crystal's high-ceilinged plus-size hotel room drips designer style and its spaces are captured with the same cool scope as the barren warrens of luridly lit indoor nights glimpsed elsewhere. Outdoors, the shabby crowded areas of many Asian city sidewalks can seem daunting for clean captures but Smith & Refn (you have a nice-sounding designer label right there!) pare down the crowd, tame the lines in the frame and then shoot with slick dynamism.
Refn craftily leaves the moral compass of the story slightly askew. Julian, to start with, is a lean handsome youngster who makes a good impression by justly deciding to not avenge his evil brother's fate. But he is hopelessly ensnared in his rabid mother's clutches and gives too much heed to her deeply criminal proclivities. He's a poisoned pup, and we see him ambling and snarling to get past the caul which he often does not want to cast off. 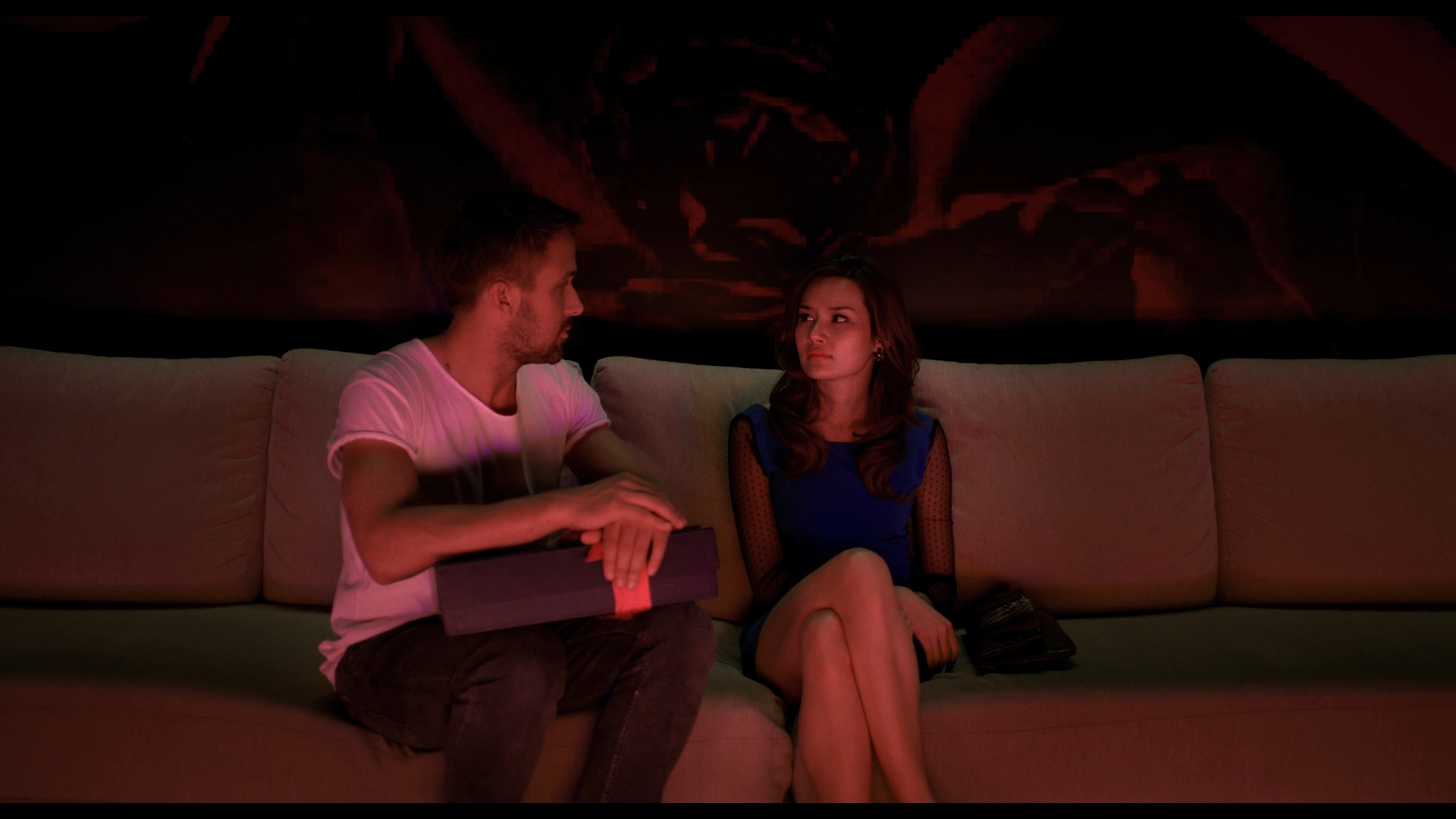 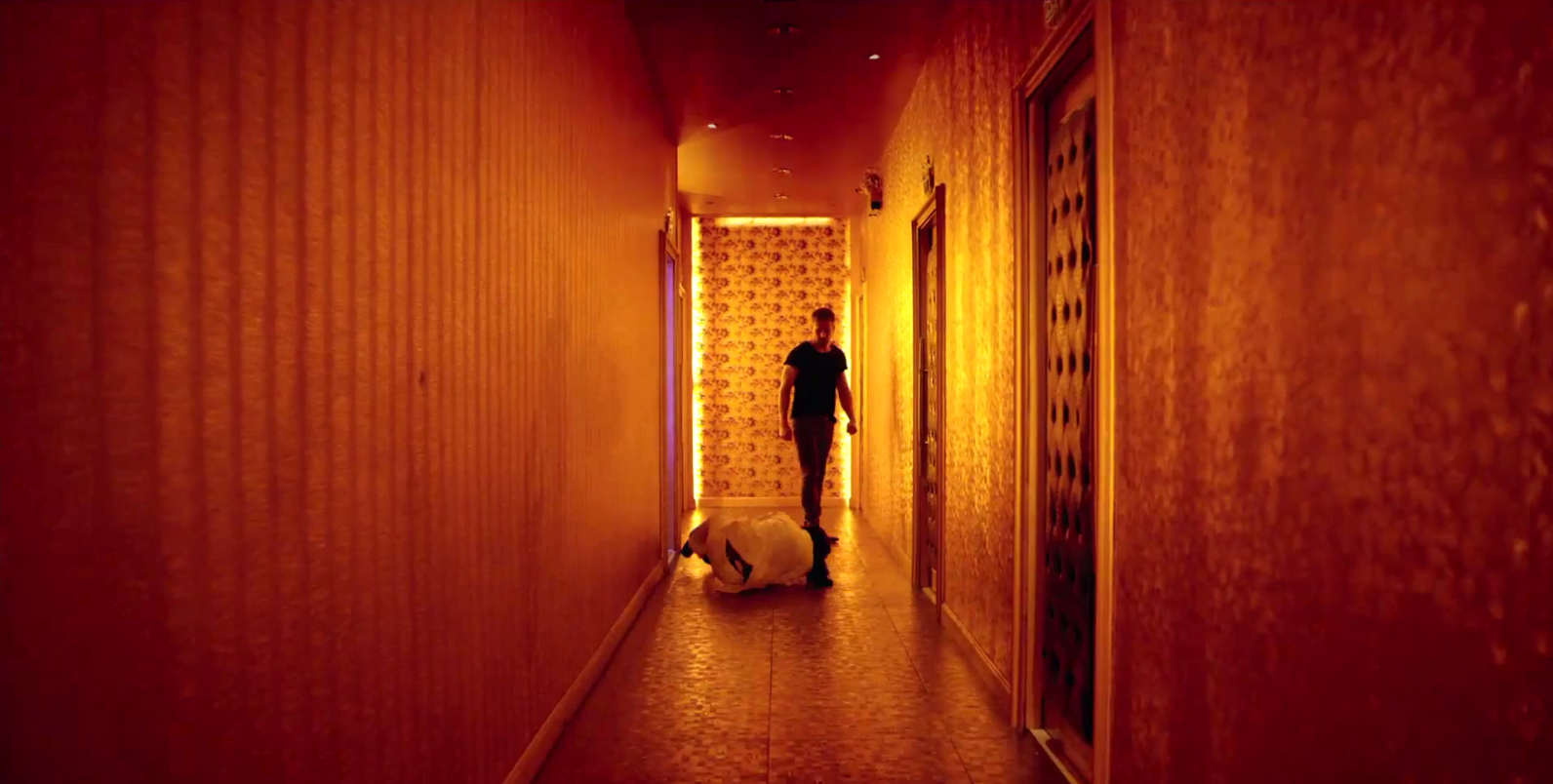 Expertly embodied by Vithaya Pansringarm, Chang the top-cop, from the get-go, seems so psychologically formidable that we don't fear any strain of vulnerability in him. His actions are so cleanly violently exactly effective in sending the opposition packing that one wonders what would happen if he actually sustained a grievous hit. Physically while he is of modest build, he carries a hidden sword which he uses to nightmarish effect, and his middle-aged body still serves as a deceptively agile vehicle when he is provoked to reveal his expert skill in body-to-body martial arts.
He is never shown to shout or raise his voice, but his face, calm and forbidding by turns, and his definitive actions set him up as a demi-god of justice uncorrupted by foreign money and its attendant lures. Young kick-boxers range around to bow and salute this middle-aged gent as he visits Julian's den. He lives in a rural-looking modestly built house and courtyard, and when he gazes out from his house window there are sky-scrapers in the yonder while the foreground has a lake and greenery. Plainly native in his appearance and commitment, with no wife but a little daughter he dotes over, he establishes highly enigmatic entry into world cinema's alpha heroes. 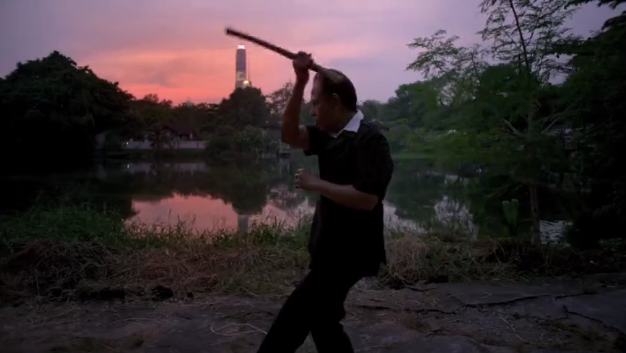 Behaviourally, the entire rasping black forest of this ensemble belongs to Kristin Scott Thomas. Her portrayal of the jaw-droppingly venomous Crystal is amongst the best of cinema's vamps. The men may wreak their physical havoc but she delivers the carnage verbally. Her words and demeanour during her first scene in the film, in an ideal world, should have had the bouncer throwing her out on her gluteals onto the sidewalk, but since this is our world, she is ushered in expedited fashion to a enormous fit-for-a-queen hotel suite. When her younger son Julian tells her that he didn't avenge his brother Billy's death because Billy was punished for raping and murdering a fourteen year old girl, Crystal barely skips a beat when she retaliates curtly "I'm sure he had his reasons!".
Dinner with Julian and his beautiful partner in a dazzlingly opulent set-up, shows her in rip-roaring form as she tears into the girlfriend, mocks her son heinously and then wells up in sparse tears asking to be excused as she is grieving over the death of her first-born (Louis Mazzini from 'Kind Hearts and Coronets' - "Women have a disconcerting ability to make scenes out of nothing and approve themselves injured when they themselves are at fault!") Persistently commissioning murder in revenge, she is terrific in externalizing her volcanic dysphoria, especially she snarls "...would have brought me his head on a platter!" and that last word is venomously splattered as she thumps the table to coincide with that coda. 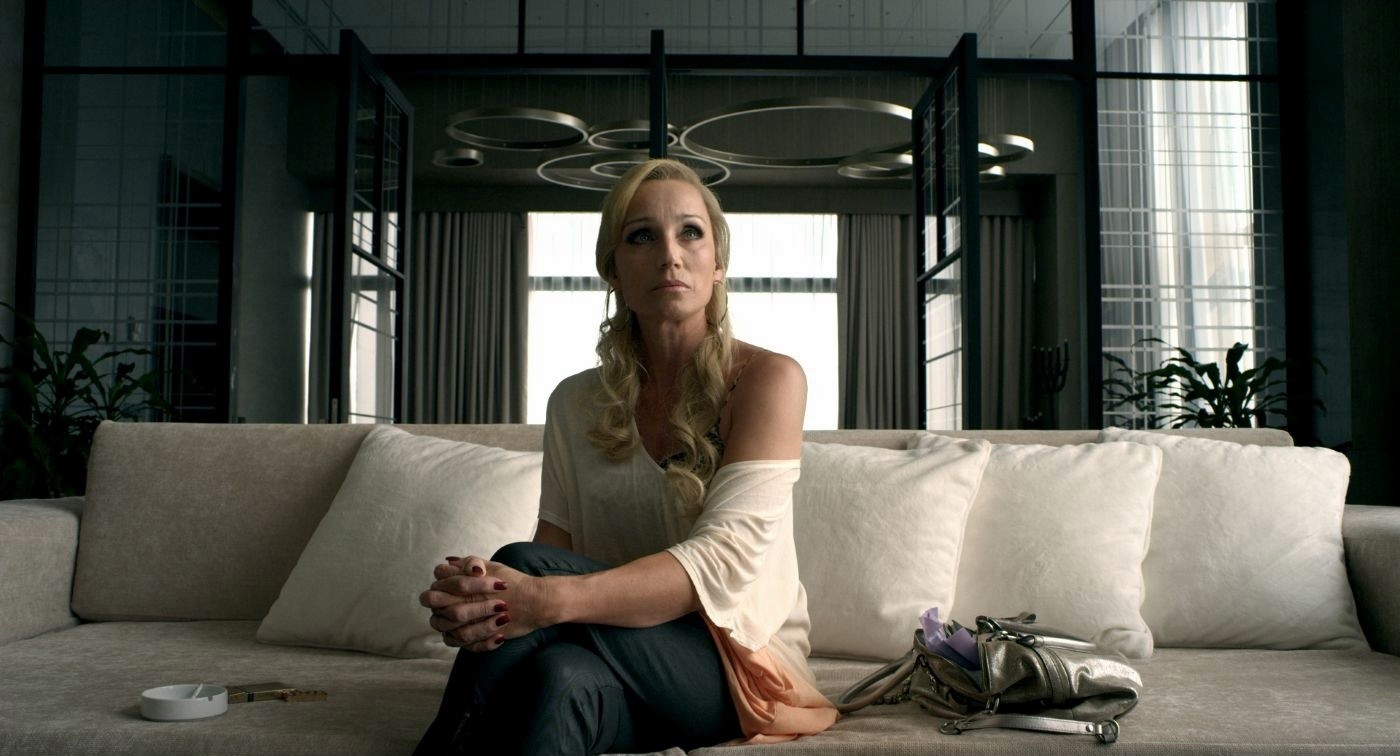 There is not much to admire in the deliberately toned-down psychologically damaged persona of Julian essayed by Ryan Gosling but I still congratulate Gosling for having the heart to agree to be only an associate element in the larger vaulting vision that this film is.
Cliff Martinez's background score is an exercise in calibrated gorgeosity. Of modern music spun and smoothed and glinted as if in an inspired hypnosis, but given an end-polish that is nothing but sober in elevating the scenes to a higher deeper level. Note the way that it captures the trans-cultural ethos by how a thrill-generating tropical drum roll leads to a grand coda from organ music. In the restaurant dinner scene it stays silent knowing that Crystal is verbally spewing enough wildly colourful vitriol to colour the background, foreground and everything in between. When a maimed father reveals how he was given the lesson of his life, all other sound is turned off and trippy chimes waft through the soundscape to complement the change in preconceived decisions. In Chang Vs Julian's kick-boxing match, the circular nature of the arena is subtly mirrored in throbbing loop upon loop of synthetic strains.
As bikes skim through the streets of nocturnal Bangkok in quest of cop-killing, frisson is stylishly slowly built up with contrapuntal currents of percussion and guitar which then tail off. As signals to open fire are quietly traded, all ambient sound dies down, a tidal wave of white noise swiftly surges up just as a tabletop is thrown above as a shield by the suddenly pre-emptive cops, and machine gunfire rips through the low hum. After that explosive salvo, other composers might have been tempted to rev up their arsenal to complement a chase through the alleys but Martinez silences the instruments to amplify the private thrill of the chase.
Thematically, 'Only God Forgives' is a striking modern legend of the East towering over the West. Technically, it is a hypnotic blend of seductive visuals and bravura music. And East or West , there is no movie like it.
UPN
UPNWORLD welcomes your comments.