Warning – This is a review of “Pyaasa” as a narrative film, with due consideration given to lyrics and songs as a judicious secondary device. However if “Pyaasa” is viewed as a proper musical, which it may very well be given its succession of non-stop songs, kindly peruse other sources for a review of this feature as a formally structured musical. Disclaimer : Those I love music, I do not particularly like full-blown musicals , and “Pyaasa” had me taken aback with its paucity of non-musical narrative.

This 1957 Indian movie, made barely ten years into the country’s independence from a foreign abuser,  both rises and plunges to become one of Indian cinema’s most significant films for a very unusual reason. It is a gold-standard example of why songs have been the pestilence of the nation’s cinema, and also why songs have been the greatest distinguisher of the land’s celluloid pantheon. The film’s director and its marquee star Guru Dutt ( age 32 at the time of the film’s release, and age 39 when he died) and scriptwriter Abrar Alvi fashion a gutsy film of unusual themes and pained introspection that gazes into the life of a struggling poet. There’s promise of great narrative muscle but ‘tis almost fatally palsied by the gristle and fat of excess songs - no less than ten of them shoved in. Some of these songs are outstanding, but their sheer number strips the film of momentum and nearly drowns the overall effect.

The protagonist subscribes to the bravest category of all men – professional poets. His name is Vijay ( the victor). His mother caterwauls in florid melodramatic mode as her son has gone missing from home, driven out his rabid younger brothers ( cf. Rockstar 2011 ) . Publishers care two hoots for his poetry and dump it in the rubbish bin. His college sweetheart Meena (Mala Sinha) has dumped him to marry a rich man, trashing halcyon memories of them bicycling behind a nubile horde all crooning how they will overcome a million difficulties along the highway of romance. A prostitute with the proverbial heart of gold – Gulabo ( Waheeda Rehman) slowly strikes up a acquaintance with Vijay, impressed by his poetry and inveigled by his noble character. Rich only with fathomless sadness and a gentle stoicism, Vijay rolls with the punches not knowing whether he will stay afloat, even as the future lays in store a delicious cauldron of ironies for everyone.

Dutt had a spiffy idea of how to stage memorable scenes, bolstered by stellar framing from V.K Murthy’s distinguished lensing. Pic opens with Vijay lying down in a park admiring nature – a vital activity which most men in this world have shamefully less time to do. He hums a ditty, admiring the symbolic lotuses floating above the murk, the sky framed by a tree canopy ( no, that’s not a dangling snake on the left side of that shot, it’s just an elongated pod of seeds) and kites soaring in the heavens. Alone later with his erstwhile sweetheart Meena, he listens to her materialistic defense of why she left him. In reply, his speech is always preternaturally soft, but the import of his words is tremendous – no man would have ever issued a rejoinder to his ex-flame with a greater admixture of gentleness, wisdom and damning expose of the other’s motives.

As Vijay’s predicament slips further into doom, the film beautifully and judiciously issues a wake-up call for honour and noble patriotism. For a resurrective power like India, exhortative songs are always in flavor, more so when the time was less than a dozen years post independence. In 1957 , the country was floundering in its nascently re-independent stages – its disastrous first Prime Minister Jawaharlal Nehru was undressing and raping the country in the guise of decency and plurality while truly great men like Sardar Vallabhbhai Patel were dead after heroically consolidating the dominion. Marooned in this milieu of halting beginnings, Vijay does not particularly find love flowing forth from the folks around him. A man cheats him with fake money paid for the latter’s porter services. An intoxicated Vijay is taken along by his shady  friends to a courtesan’s house, and it is only Vijay who notices with a broken heart as the woman’s baby cries out in a nearby cradle which she is forced away from it and goaded on to continue dancing by the drunk men around her. Spirits and tears wet the lens in a dramatically bold depiction of dolour as the poet-patron surveys the spoils of the scene.

Comic relief , not that it was needed but try telling that to mainstream audiences, comes in the way of Johnny Walker’s endearingly goofy act as a travelling head-massage therapist. Reed-thin, with a ultra-short Chaplinesque moustache, he is pleasantly loopy with his good-hearted jokes and his most famous legacy is the ‘Sar Jo Tera Chakraye’ song , well-known in India to this day, delivered at an early juncture in the story. The story also puts him to splendidly practical use when push comes to shove.

The film’s ending has a superb twist to it. It was a daring commercial move, considering audiences would not have spontaneously taken to it. This arc is very similar to a 1944 story written by the great Vladimir Nabokov, titled ‘ A Forgotten Poet ‘ . You may read the paragraph in the photograph below, After watching the movie, in the interest of avoiding spoilers. 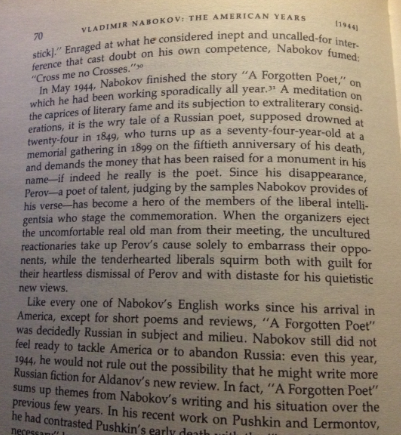 The female lead actors – Mala Sinha and Waheeda Rehman, emote excellently, but the film’s best act belongs to Guru Dutt, his persona seeped in wholesale quiet melancholia and magnificent brooding, the good core in him somehow surviving.There is also a honest depiction of how fragile this “hero” is, foretelling his tendencies in real life.

The songs, as decried at the outset, are the bane of the film more than being its boon. Practical considerations of the era should certainly make us admit that Indian audiences at that time liked and encouraged filmic songs a lot ; indeed, songless Hindi films in 1950s India were as extant as the Indian Cheetah was. Even so, I contend the audience would not have sunk the film had it sported merely half a dozen songs – the producers, distributers, writer and hapless director push it closer to a dozen. Writer Abrar Alvi and the director Dutt no doubt made the conscious decision to set up the film as a promotion of lyrics, this being after all a poet’s story. But the degree to which the run-time is dominated by lyrics can make one suspect that the story-teller does not have the ability to tell a story without music, and that he or she needs the constant crutch of music to lurch along.

That said, there are some terrific examples of simply crooned lyrics. Forced to sing at a gathering where he sees his ex-lover seated in the audience , the hero lets rip an elementally hummed collection of brooding and melancholic lines ( Thang Aa Chuke Hai… I am tired of the struggles of life, today I have torn away the hope of relationships)  which begin rather benignly with an expression of weariness and then crescendo-explodes into a shower-storm of abnegation.  Jaane wo kaise log the jinke pyaare ko pyaar mila – I wonder who those people are, who received love in return for their love -  is another triumph of simple genius , woven with haunting melody, and drenched to the bone in unrequited love. The magic peters out some furlongs thereafter in the movie, with the repeated intrusion of much less catchy songs, and after a while I stopped caring whether the songs were great or not, finishing the rest of the film with glazed eyes. When you try to cater to fads of the day, you may succeed, but in the current day , I have noted even amongst my co-spectators that the film fails to gain traction with its story-telling gravitas.

This very weakness that I posit , has its fervent admirers. Film director, writer and reviewer Olivier Assayas highly admired how the film integrated poetry. My mother who watched the film with me recently , told me that I hadn’t understood properly the film’s technique of diligently promoting the poet’s lyrics. Was my mother a more insightful critic of this film than I was ? I hope so, for her sake.