I am always surprised when my favourite critics, even my Gurus, say "I hope this performance gets recognized at the Oscars". Since the Oscars are the numero uno awards of the world's favourite and dominant film industry, it follows that a helluva lot of politics plague these awards- so the winner is often not necessarily the best of the pack. Discussion of specific examples would elbow out this entire review but on the bright side, it fills me with gratification when a niche but monumental film like No Country For Old Men won the Best Picture for 2007. Looking down the decades, it is an occasion for similar cheer when Midnight Cowboy sauntered away with the top honour in 1969 (it was X-rated to boot; today it would be significantly lower on the rating scale) That decade-ending event auspiciously inaugurated what is often called the greatest decade in cinema. When I first watched this film directed by John Schlesinger and based on a novel by James Leo Herlihy - what appealed to me was how intimate and personal this journey was, shot through with shades of deep trauma and the torture of perverted desire. The next viewing drove home the bravura editing and the avant-garde dazzle it gives to this story. Now the movie rests in my mind as a brilliant fusion of technical chutzpah and wrenching emotional depth. And it is the best friendship movie I've seen in my life.

The sound of stampeding hooves informs the opening shot that recedes from a white projection screen in an empty drive-in - the age of the cowboy is over (...perhaps not metaphorically). Cut to Joe Buck - a strapping lad who sings in the shower and then dresses up in cowboy gear for an important occasion - he's about to beat town, having had enough of dish-washing and the Texan hinterlands. Flashes of his past show florid shades of trauma and he's all geared up now to foget that hell and travel to New York City where mature women, who're presumably deprived of eye-widening sex, are apparently waiting for this hot hustler. There's no bravely cheering family to send him-off, hence he happily intimates his plans to a white uniform-clad simpleton in the kitchen who is amused at this ambitious mission. Hopping onto the bus, he leaves the mofussil sun-beated expanses of this Southern desert to journey onto cougars and wealth.

In the streets of NY however, handsome tall and young Joe finds that the middle-aged wealthy-looking ladies are just not interested in this costume-blaring cowboy. One of them beckons, and he grins and follows, but the poodle she holds on a leash proves, in retrospect, to be an ominous symbol. Gays of all ages, however, find him an attractive client. Joe falls into the orbit of Rico "Ratzo" - a shady young man of limited height, who's actually a pickpocket. Rico has a crippled leg, and his coughing fits and frailty suggest tuberculosis if not something more sinister. Deception and recrimination later, they become pals and Rico takes the aggrieved Joe into his crumbling dilapidated single-room. Neither of them are interested in earning the conventional way, so while perpetually teeering on edge of total penury and hunger, and with their combined acumen failing to resurrect Joe's gigolo gig, the two dudes hunt for any scrap of survival. And they start looking out for each other, triumphantly bringing food medicines and clothes home for the other, while good-naturedly bickering and sniping. But the bone-chilling cold of the winter creeps in ,there's no heating, no promise of continued food, and the great city of NY closes in on them, taxing their reselient friendship with its no-nonsense implacability.

Strains from this story might well have been an inspiration for Sidney Sheldon's lacerating epic "Stranger in the Mirror" - the fright triggered by memories of zealous religion and associated ceremonial half-drownings , the bus journey from Texas to the Big Starry City, and sexual trauma. Joe's familial and emotional background is expertly shown in teasing flashbacks - we never quite know what the exact details are, but strong hints of a churning dark world are given - two women bring him to his grandmother who brings him up alone, women moan and whisper to him "You're the best,Joe You're best!" and a harrowing assault occurs at night with torchlights. The gays whom Joe agrees to meet in private, driven by his urgent need for money, add to the roil with the emotional and moral stigmata they bear - this is seen in their piteous tortured melancholia. Joe might have eventually found a way to survive in NY but then it is his lot to become the close pal of the physically disintegrating Rico. While snappily navigating through the ruins of his flat, Rico proselytizes to Joe "Only two things are essential for life "Sunshine & Coconuts". With that nutty idea sown, and the promise of Florida cultivated, the need to strike out big in NY becomes that much more dilute...

In addition to debut cinematographer Adam Hollander's snazzy camerawork and the editorial board's shot-mixing finesse, I liked how the story always remains grounded in hard reality rather than going for audience-pleasing faff. That bus journey at the start, from one world to another inside the same country, is packed with verisimilitude. Little things, like the steady drone of the bus, and an eclectic selection of true-to-life passengers, bring to sharp life Joe's transit from the boondocks of rural country to the mega-bustle of a metropolis. In the bus, girls giggle and crane their heads to gaze at him - no doubt he's an attractive man and when he angrily tells Rico - "Women like me Godammnit! Hell, the one thing I've been good for is lovin' ! Women go crazy for me, that's a true fact" we don't really disagree. Rico might insightfully tell him that the women he targets are "socially registered types' who do things in a very discreet way, but even the best of Rico's conniving "management" skills have to cope with the fact that Joe is not the world's smoothest Casanova when eventually let loose next to a lady.

The "Swinging Sixties" party sequence in the latter half has been criticized for its scattiness - but in a picture like this which is a snapshot of that era of America, such a free-swinging drug-fuelled lights-glamour-psychedelia party also serves as a well-deserved oasis of respite for Rico and Joe, considering they are stuck in so difficult a picture. Free Food is piled high, attractive women cluster around and the camera-'n'-spotlights are trained on them - poised to record any nugget of wisdom they might produce. In retrospect, I feel Rico was either too tired or too overwhelmed or both to amuse the chicks by proclaiming his insight about "The Essentialism of Sunshine and Coconuts".

One of the movie's last sequences involve Joe's encounter with a middle-aged out-of-town man with horn-rimmed glasses and an ingratiating British accent - the way that scene's ending is inter-cut with another sequence is one of the movie's highest triumphs - fusing determined plans with the asphalt of reality, layering tragedy upon tragedy and blending technical style with the dynamic between two different events- one which is happening, and another which will happen hours later facilitated by the first. From here, the movie banks on steady-storytelling and the measured run towards the finish line, but whether or not you anticipate the denouement , the pay-off is emotionally satisfying. Schlesinger does not try for melodramatic trumpeting here, he just lets the build-up and imagery exert its natural effect. There's no music during the crucial event, but it sets in later to subtly compliment the mood and usher the end.

Schlesinger's flamboyant yet tight direction gives the film a crucial edge - modern and retro and snappy at the same time- which few other directors might have been able to match ,and I find it striking that a British man was able to bring the American zeitgeist and characters to such sharply evocative life. Kubrick went to UK and made 'Barry Lyndon', Schlesinger came to America and made 'Midnight Cowboy'. He was gay, and to complicate matters his overweight condition made it more difficult for him to find suitable partners, especially at a time when homosexuality was a greater taboo than it is now. Those thorns of personal life are amply reflected in Midnight Cowboy. This story's other major parent did not lead a serenely happy life either - the novel's author James Leo Herlihy was also gay, and he committed suicide in his sixties. With all these associated negative currents and taboo, it is truly remarkable that the Oscars in the sixties decided to placate the ghosts of this story with the choicest laurels - the audience also accorded generous support.

"Greater love hath no man man than this - that he laid down his life for his friends" so goes the hoary saying. As great and noble as this sentiment is, you don't always need to express legendary friendship by leaping across and shielding your friend from the fatal bullet. Sometimes, as this movie shows, just being there, through the winter and dumps, through the changing of urine-soaked pants and doused dreams, will do.

Beside the poster of one of his favourite movies, UPN poses. 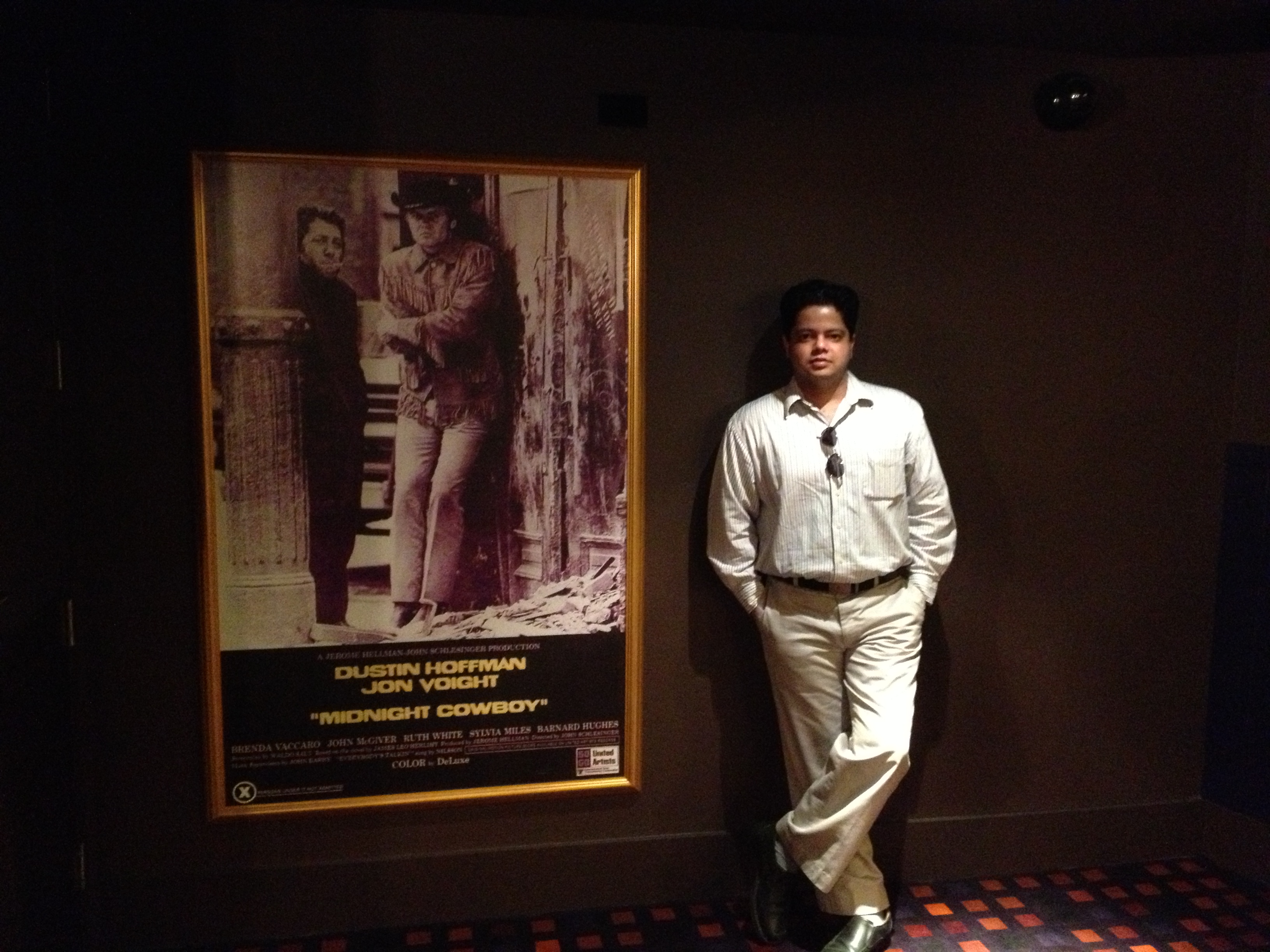