Rating : 3 stars out of 5 (Good) - A highly unusual, totally plot-focused Hindi whodunit that gives absolutely no concession to the Indian film audience, and a daring period film for that very reason.

The old and the new, in the case of the Hindi screen versions of Byomkesh Bakshi detective stories, have one praiseworthy thing in common - they are not expressly anchored to commercial concerns. The 1993-’97 TV version was a purist rendition , keenly directed by Basu Chatterjee with a superb title performance by Rajit Kapoor - the latter’s thespian finesse was put to fine use in portaying a “truth seeker” who was perspicacious and yet not pedantic. The 2015 songless film version, helmed by top director Dibakar Banerjee, introduces Bakshi as a 24 year old emerging private eye rapidly cutting his teeth on escalating danger and cataclysm. He inhabits Calcutta alright but the densely woven storyline and the World War II backdrop , peppered with Chinese gangsters and one Japanese schemer, is a world so far removed from  Bombay potboilers that what we’re watching is much closer to a 1940s Hollywood noir thriller. I was not particularly pleasured by this tautly constructed period movie but was eventually left with admiration for Yash Raj Films for letting Banerjee do what he wanted while caring a fig for the Indian box office.

The plan at the outset seems to have been to select a Byomkesh Bakshi story ( the series first appeared in the 1930s authored by Sharadindu Bandyopadhyay) that has an elaborate but covert political backdrop , and jazz it up with brisk pacing and a modern background score of crackling energy. To his continued credit, Banerjee never makes the narrative seem rushed, and for the technical domains he relies on associates familiar to him - lenser Nikos Andritsakis ensures a moderately sepia, frequently noir and totally new Calcutta of the old while Sneha Khanwalkar perks up the carefully deployed soundtrack with synthesizer riffs. The story kicks off with “Shanghai” (the title of Banerjee’s previous film) goons running into trouble in Calcutta docks while a noted chemist disappears. His son (Anand Tiwari) recruits the help of budding investigator BB -  a prodigious deducer with an additional eye on the nuances of human behaviour.  Young Byomkesh (Sushant Singh Rajput) enters into lodgings in the big city under the landlordship of a Dr.Guha whose character is the story’s most interesting one.

Soon a politician is blamed, a unique type of opium looms, the intrigue thickens and changes facets, flesh is ripped and blood flows as murder imbrues the screen and a femme fatale also slips into the fray . Byomkesh’s early triumphs and newspaper glories give way to bigger challenges as he realizes that a much larger plot is underway as whole countries swim into this treacherous game…

Banerjee, as before, is unafraid of doing hard work - and here he is keen to show us the period detailing of this film. An early scene shows Byomkesh settled in a tram seat , and as the opening credits roll, the shot is held as the tram window shows us the shops, signages and cityscapes of British-ruled Calcutta. Later in the narrative, markings on porcelain cups , political banners of the era, posters of aviators plastered on pillars and boards proclaiming “Lipton Tea”  all seek to tell us of the production design’s efforts. With co-writer Urmi Juvekar‘s input in embellishing Bandhopadhyay‘s original story, he fashions a constantly suspenseful mystery where the young detective’s continuous unraveling of the case bring us closer and closer to the actual web of truth - but not till the last frames do we actually understand this complex network of crime. But for nine-tenths of the runtime, the characters in this pikchar just don’t have enough juice in them to make them an arresting watch. Banerjee comes to this film after the landmark achievement of “Love Sex aur Dhoka“, and the restrained but naturalistic strength of “Shanghai”, but here he plateaus again instead of soaring.

And he errs significantly in believing that Sushant Singh Rajput can shoulder the demands of the central role. Rajput in ‘DBB’ has neither the screen presence, nor the charm nor the fluidity of physiognomy to make us invest significantly in this budding heroic detective. He’s not bad, but he’s just not memorable. Thankfully the story has enough going for it so that we frequently forget about Rajput’s limitations , moreover the ending has such unexpectedly florid gory frames, complete with rapid cross-cutting between the insane baying villain and the troubled face of Byomkesh all ending in flamboyant lurid lettering strongly reminiscent of the graphic novel format, that I was thrown by this sudden generation of dark frisson at the fag end of the story. Sure Part II would be nice , but either get Rajput to jazz up his game, or get a better actor in. 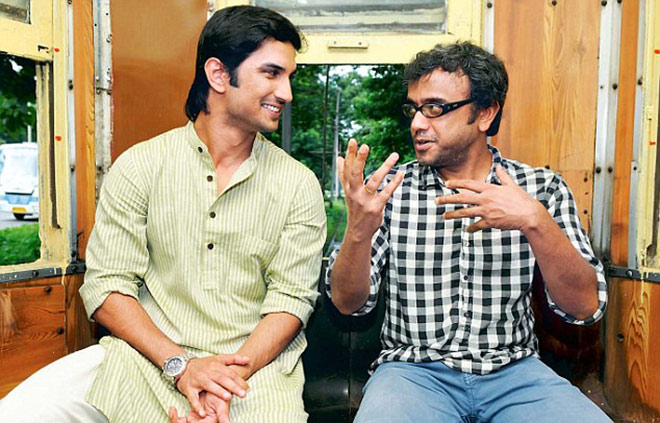