Auspicious spears are fired all through the terrific trailer of Hamara Hamlet. Urdu canoodles with snow-swept Kashmir captured in slick high-definition, as a gravelly voice-over tells Hesitant Hero Haider not to spare his wicked Chacha on whom Inteqaam has to be taken because he put Fareb on H’s mommy. If you’ve cared to be a purveyor post 2000 of the hybridized beasts who‘ve been stalking Mumbai‘s celluloid  gallis and creating cinema that‘ll weather the ages, you may extrapolate and infer that this pikchar might indeed be Vishal Bharadwaj’s handiwork. What’s more, our most artistic bhaiyyaa (Anurag Kashyap, please don‘t mind) brushes up his compositional kit, and rocks the rafters with kick-ass larynx-guitar-bass drums in “Aao Na“. Also Coming Hither is the edgily superb Kay Kay - the Hindi Cain - who resurrects here from the dead bad elder bro of “Sarkar” to reprise another. The Teaser further kicks up the ante with Shahid made totally Shaheed by his mission, as this chocolate hero bleeds and sprouts psychotic, guns explode, beautiful angel Shraddha Kapoor cooes and cries, ashen Tabu threatens and prays, while Haider flies like an eagle past the flanks to avenge a largely flaccid 2014.  Excited?  I bay-shak was.

In Shakespeare’s dark brooding ‘Hamlet‘, the younger brother kills the older one and takes his throne and wife, whereas the dead king’s son later returns and deliberates revenge, prompted by his father’s ghost. Bharadwaj jettisons this European orgy of rhetoric, misappropriated assets and sexual turmoil into the subcontinent’s northern tip where in real-life, Pakistan has almost succeeded in doing the same to India, while the real-life Hamlet in our country presumably got aborted and has thus landed us in a royal soup. Bharadwaj’s sly metaphor thus gets a nice little victory with his script’s opening gambit even before the film opens.

So young man Haider returns to Kashmir from Aligarh, and finds that his ghar is in ruins, with Daddy Doctor Dear( Indian surgeons usually have M.S in their degrees, not M.D as shown in this movie) having disappeared into the State’s maw, while mother and uncle are cozying upto each other. They both lovingly welcome him, but he sneakily calls their bluff and makes them go red-faced.  But mum Ghazala really loves him, while Chacha Khurram only desires Ghazala and power. H launches into a paternal search amidst Kashmir’s dungeons prisons and interrogation camps, while a beautiful young lady - Arshia(touchingly played by Shraddha Kapoor) romances him. The plot thickens as he receives an important boost in his endeavour. But doubts then start snaking in - who can he trust, especially in a no man’s land where every party has vested interests?  H ultimately goes nuts, and then impressively launches into a whole range of histrionics, ninja dance moves and pulling faces but then when he becomes too dangerous, the entire town starts baying for his blood….

Vishal Bharadwaj is Hindi filmdom’s pre-eminent creator of brooding grunge dramas set in mofussil India. Though Unique, he likes to mine Shakespeare and harvest the spoils in Bhaarath’s hinterland. Inspired by such film-makers as Krzysztof Kieslowski, his characters often drown in a similar dysphoria. Bharadwaj continues to keenly compose music but both the present and posterity will remember him more for his cinema. His first big break came as music director for Gulzar’s Maachis - a film of social pathology not very dissimilar in tone from V.B’s celluloid milieu. Moving onto direction, he envisioned Maqbool which fused Macbeth with Mafia in a one-of-a-kind film that artfully depicts an Indo-Saracenic vassal usurping a doomed throne. Omkara chanelled Othello and it was good but not great. Plumbing his nadir, he made Kaminey which was meant for genuine kaminey who have no taste or sense in cinema. His writing chops rose to the terrific fore in Ishiqiya’s first half, but became flaccid in the climax. 7 Khoon Maaf, of a widow who kills all her dastardly husbands, was a good idea executed with too much languor and not enough chutzpah. And then we come to Haider…. 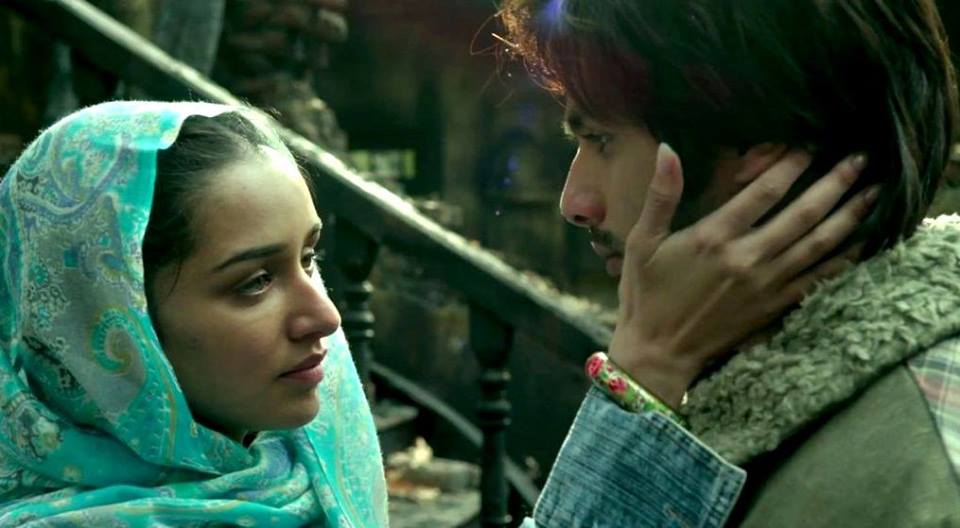 Bharadwaj cares two hoots for commercial interests in this film - a dare-devil choice for a mainstream film-maker. Unfortunately, Haider lacks innate momentum .When the audience around me would sometimes yawn, I half-empathized. The run-time of 2 hours 40 minutes could have done with more gravitas and extra imagination, or the same material should have had 20 minutes chopped off - neither is done, and consequently the pace suffers at least half as much as the characters do. The movie’s prologue - a tension-filled sequence that sets the thematic backbone for the film - is not a cracker-jack starter like Khakhi’s was, but it’ll do.  There are brilliant interludes, like a duo who hilariously mimic their idol Salman Khan( the writer-director often likes teasing Mumbai‘s Tinseltown, and does a good job of it) and Irrfan Khan’s entry jazzes up the narrative with a superb joke(the whole theater laughed) on a hapless Kashmiri’s psyche. Tabu and Shahid’s encounters often simmer with tension, which on certain occasions, boldly and excellently suggest one half of the Oedipal complex.

In theme, the picture boldly treads. It’s not interested in Pakistan-bashing as so many of our films are - rather it hints unflinchingly that the Indian government has not done enough to win the Kashmiri trust, and the film’s ultimately pacifist message, though hamstrung by an underwhelming climax, is still a bloody little victory. But as elite reviewer Bharadwaj Rangan pointed out, Haider has too many “footnotes”. Sometimes the Hamlet template becomes redundant here - a good example is the “Bismil” song - by that stage, the uncle’s guilt already looms large so there’s little point in trying to test his reaction with a dramatic simulation as occurs in the play. Moreover one can’t even enjoy the song’s tune per se because it is dodgily inchoate.

But many of these crucial flaws area salvaged by top-notch acting of the principals. Tabu, essaying taboo choices made by the young hero’s unhappy mother, is perfect. Embodying tenderness, genuine grief and manipulative knack, Tabu, even with age catching up with her both onscreen and off it, remains sensual, voluptuous and moving. Kay Kay matches up every bit, balancing coldly calculative villainy with shades of vulnerability and hidden depths. And as Shahid Kapoor himself said, this is his most demanding and rewarding role yet. I won’t give him an award yet, but Yes, he rises to the challenge of being Hamlet, changing gear from silent sensitivity to charged roiling anger to crazy colorful buffoonery.

In songs though, Haider’s choices are truly loony. The film has three full-length songs, none of which I’d again listen to, even if I’m bored out of my skull. Bharadwaj urgently needs to realize that he’s shortchanging his films with his own lackluster songs, but I doubt his indulgence will allow it. And to top it, that fabulous rock track that makes the trailer fly “Aao Na” never kicks in - the script fails to find an imaginative backdrop for it. The background music is fair but it errs significantly when it provides a hard guitar underline to a snowy scene of murder in which silence would have been more hard-hitting. Pankaj Kumar who cinematographed “Ship of Theseus” is not bad here, but considering he had Kashmir’s beauty to exploit, he falls short - favoring hand-held shots and wrongly tolerating some tilted frames, while not showing adequate knack with angle, focus and smooth dynamism.

With most of our “leading heroes” now revealing that they don’t have the spine for serious cinema - a tiring Shah Rukh Khan, a mostly cowardly Hrithik Roshan (note that I don’t include Salman Khan in this list as he became a joker a long time ago) it is up to our current generation of directors now to supply Indian adults with the cinema they deserve. Kashyap, Banerjee, Selvaraghavan, Ali and Motwane form some of this illustrious ilk - and Bharadwaj proves again that he is amongst their brethren. But alas he is yet to prove that he is ready to be Big Brother.