If there's one composer on this planet who can blend cut splice and outright alchemize Indian music with modern razzmatazz , and give royal takkar to any of his "peers" by matching or even outclassing whatever type of music they've composed , it's You Know Who. Imtiaz Ali would have told the gent who's fast becoming his regular music-composer - A R Rahman - that he wants Dev D's 'Pardesi' and 'Emotional Atyachar's wicked flavour, bisected through a corollary of Rockstar's "Katiya Karoon", infused into a bespoke blend for 'Tamasha'. Voila-Balle! We get smacked with the song : 'Wat Wat Wat !!" : the goggle-sporting bandar-masti of which is best enjoyed with its killer video that mixes snatches of Ranbir telling his Daddy that Ingineering sinks his boat which'd rather be rocked by break-dancing in lecture rooms, pirouetting atop corporate meeting tables, and grabbing Deepika along eye-poppingly snazzy jaunts through Europe.

That uno numero number as a teaser serves as a terrific introduction to the frisson-filled promise of "Tamasha" , the new picture helmed by one of India's hottest directorial talents, and starring Ranbir Kapoor who suffice it to say is doing Daddy proud by continuing the tradition of handsome looks and gifted thespian chops (gender-bias aside, we'll talk about Deepika soon). Imtiaz Ali had trundled out a sophomoric tit-for-tat love story in "Jab We Met", then collapsed the rafters with his masterpiece "Rockstar" before again going on to hit a lot of deliveries clean out of the park in last year's brave-heart road movie "Highway". What new avenue of bravura story-telling has he managed to rustle up this time?
Auspiciously, both content and style not just ride but fly first-class in this newest vehicle of next-gen Hindi films. Girl & Boy - Ved et Tara - happen to meet in the post-card pretty locales of Corsica, France and rapidly strike up a clever chemistry followed by the physics of liplock (biology also ensues). I said "clever" because Ved (Ranbir) right from the get-go whips up a confab dipped in filmic yore and parodic style while Tara (Deepika) sportingly responds in kind. The Imtiaz Ali imperative of the separated-lovers phenomenon then sets in. But you can't keep star-crossed romantics away so in a chic social space hidden somewhere in Delhi's quagmire, hearts coalesce again but alas the flamboyant mafia of Corsican naughtiness that killed their tedium in France seems to be in short supply amidst Delhi's diktats.Tara is disappointed, Ved is crestfallen and lo we get the crucial dramatic conflict that is needed to resurrect their flagging flames...

A pal of mine posted on Facebook, before I saw the film,  that he slept off during the movie - knowing him, I interpreted this as a good sign for the movie's quality. Prose is interspersed with ballad to enliven the atypical but refreshing narration of Tamasha. And oodles of humorous mockery perk up this unique effort. Ved and Tara's interaction kicks off as I mentioned above with dollops of mock-talk recalling yesteryear Hindi classics. This oblique stylized exchange was beginning to wear thin on me when I laughed heartily at a bedroom scene that occurs early on, in which Deepika's dirty slut-talk bounces off the mattress and brings down the roof with its wickedness. Rahman then superbly follows Ali's brief to compose a tongue-in-check foot-tapping folksy zinger that colourfully tells us why Heer is "badi" sad after she leaves Ved for the first time.
The resumption of their affections in India is coolly captured - there's an unforced unhurried sense of humour and we note the unreal ease with which things seem to be coming along swimmingly.Ved's lyrically flowing and charming raconteurship we have seen earlier, is transplanted by a polite and assiduous corporate mama's boy nature that puts him into deep trouble from unexpected quarters. What happened to this carefree ditzy story-teller so as to make him so staid and predictable? Did his monied Dad never listen to his pleas to be allowed the luxury of ditching maths-'n'-engineering which he just can't figure out, and plunge full-time into dramae-baazi that he dearly loves to practice?

Here, as before, Ali recognizes the vast value of recruiting high-quality associates. Anil Mehta is missing this time behind the camera but Ravi Varman admirably replaces him and uses both canvas and palette excellently (there are even some trademark forward-gliding shots through Corsican alleys as a nod to Mehta). He makes good use of his background in filming the much-feted 'Barfi' to colour in filtered France and wintry Indian locales. Production design graced by the work of Basu,Basu & Hedao, ensures elegantly plush interior decor (though a table-lamp from Ved's Corsican room is the same as that found in the scene which features Ved's father for the last time in Shimla, India).
Aarti Bajaj's editing here does not evoke her virtuoso work in Ali's 'Rockstar' and Kashyap's 'Ugly' but smart scene placement is still evident. Ved's shenanigans in lecture rooms and boardrooms which I was eagerly looking forward to, is pushed so far up the narrative arc that when they eventually happen, they appear as surreal fantasized versions rather than events that really transpired. 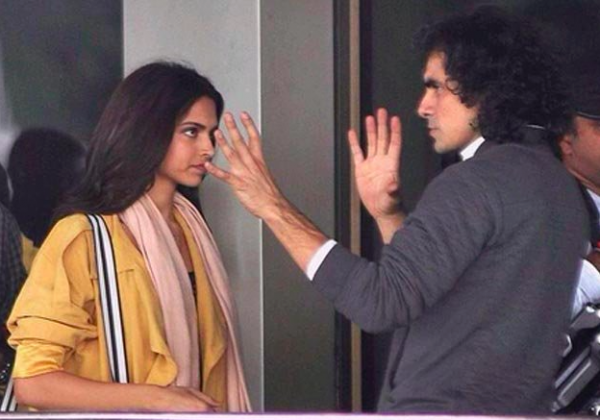 Other narrative choices also impress and justify what Ranbir said apropos Ali when he declared him an "Ustaad" of story-telling for his work in last year's 'Highway'. What's more, Ali has scripted both the unconventional story and the colourful dialogues for 'Tamasha'.When Ved returns to the story-teller of his childhood, we don't exactly hear the warm grandfatherly prophecy that lesser films would saddle their audience with. It is not clear which real-life corporate boss Ali is mocking, but Ranbir's last scene with his employer is an absolute hoot that few directors in Mumbai would have the chutzpah to picturize. But Ved's father's eventual perspective regarding his son, and the oh-so-happy finale atop an applause-flooded stage did not warm my cockles. Ali again retrogresses into his same old habit of sprinkling sugar onto his film's endings.
I had never warmed up to Deepika this much before 'Tamasha' - even now I don't think she is a born actress but when she does sparkle, she is immensely endearing. It is easy believing her anguished determination when she tries to re-engage Ved, and her Chinese parody near the film's end particularly is hilarious. Despite their real-life break-up, 'Tamasha' sees her displaying beautiful chemistry with Ranbir who considerably enhances his CV with his efforts here. He does not match his 'Rockstar' heights but it is loonily joyful to witness his 'hell-cares' flamboyance in the shot of the lecture-room break-dancing and his sly sneaking in of chortle-worthy gibberish in his corporate presentations. The show-finishing story he narrates to his Daddy, has ripe thespian potential, with Ranbir having to display constant shifts of acting between calm narration and colourful theatrics.Yes he is undoubtedly excellent but he stops short of being spell-binding. 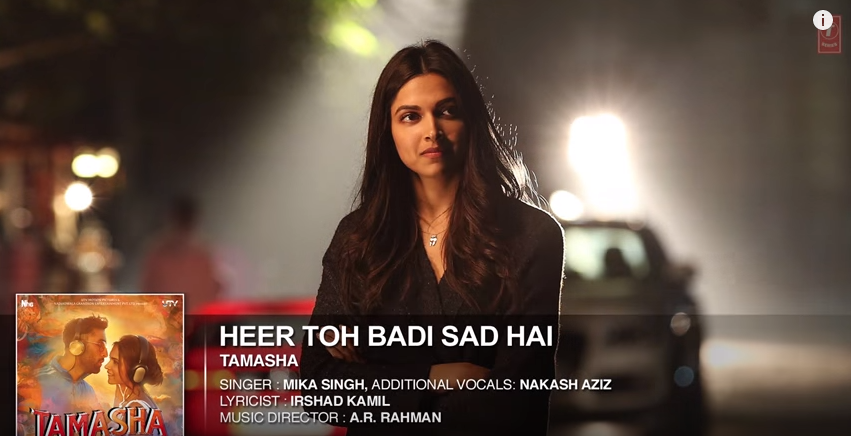 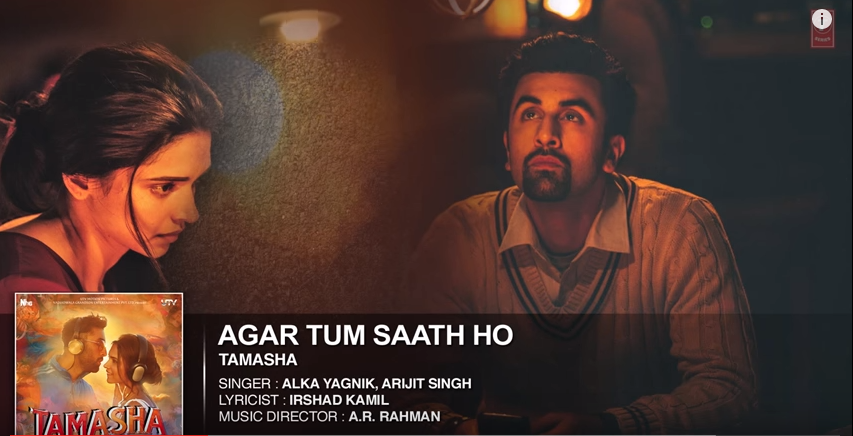 A R Rahman apart from the afore-mentioned triumphs is not in rip-roaring form but still manages to value-enhance this picture. Ali perhaps asks for too much when requisitioning Rahman to replicate the splendid fiesta of tune and rhythm that 'Hawa Hawa' was - 'Matargashti' never really takes off though some stretches of it are smoothly effective in evoking yesteryear Shammi Kapoor and Dev Anand ditties. 'Agar Tum Saath Ho' is the most affecting song of this soundtrack - Arijit Singh's pained throw of voice is amongst its best assets. For this song, Rahman brings back the almost-retired Alka Yagnik as much for old times' sake as for the quality of her voice. The husk, fat and general restriction in her vocal cords are conspicuously noted this time but the honey and silk of her singing retains that ultra-smooth caliber that reminds her loyal admirers such as myself, why she has always been an outstanding singer.
The Indian press has cottoned on and labelled Ali's latest enterprise as "nouvelle vague" , aside from the fact that the movie has already made Rs.47 crore by the five day mark in India and looking all set to cross Rs.100 crore world-wide shortly. I have to concede that the much-maligned Indian film audience has redeemed itself this time. Yes this film has a 'message' (to use that dreaded word) but Tamasha's true triumph lies in its style of story-telling rather than its content. And Ali, despite commanding the ability to attract stars and big budgets, takes a massive risk with a challenging narrative style that has ultimately paid off both literally and figuratively. He has now made three memorable films in a row - in an eminently fickle market like India, that is a minor miracle.
UPN
UPNWORLD welcomes your comments.