French Cafe : Restaurant Review III
3 stars out of 5 (Good)
Auckland , NZ
November 2016
For a vegetarian in a fine-dining destination , the central problem is that he or she expects a full meal to be conceptualized and executed by a chef who's not a vegetarian. The great majority of haute-cuisine chefs are not vegetarian themselves. For a thorough meal without meat, seafood and eggs , that chef has to step outside his comfort zone and construct a series of dishes that they themselves would only rare consume.
My three previous visits to French Cafe did not have vegetarian diktats, and save for the first excellent nine course meal, the other two proved to be qualitatively similar to this latest one. Now, French Cafe has pared down its maximum course degustation menu to six courses, from what was nine previously, while retaining the $140 price tag. I feel the cost is still easily justifiable for a creme de la creme place, and narrowing the focus to six dishes served over more than three hours , allows one to present only the best hits from one's repertoire. This was the idea - but just how well did it succeed?
Amuse Bouche : 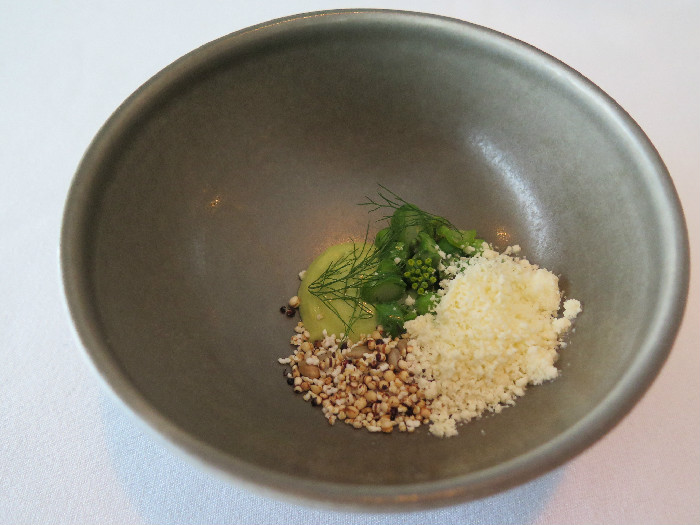 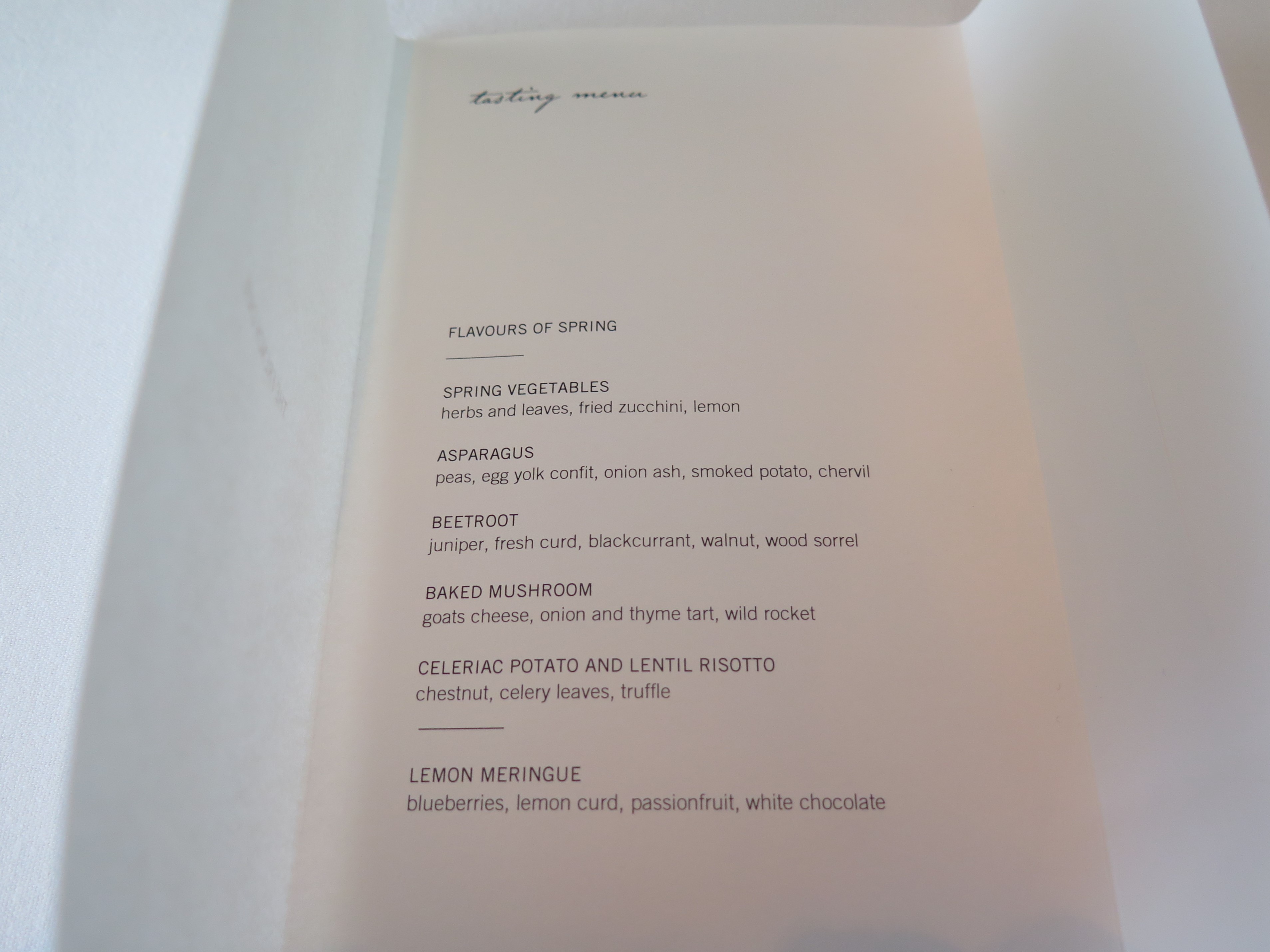 Lovely tastes of spring were caressed from lightly fried zucchini that jousted beautifully with fresh peas and broad beans all tied together with perfectly subtle seasoning. Alain Passard from L'Arpege would approve. Pleasure escalated with a dish of chopped asparagus and smoked potato into which a host gently poured mushroom broth table-side. The depth of taste in that broth was stunning. 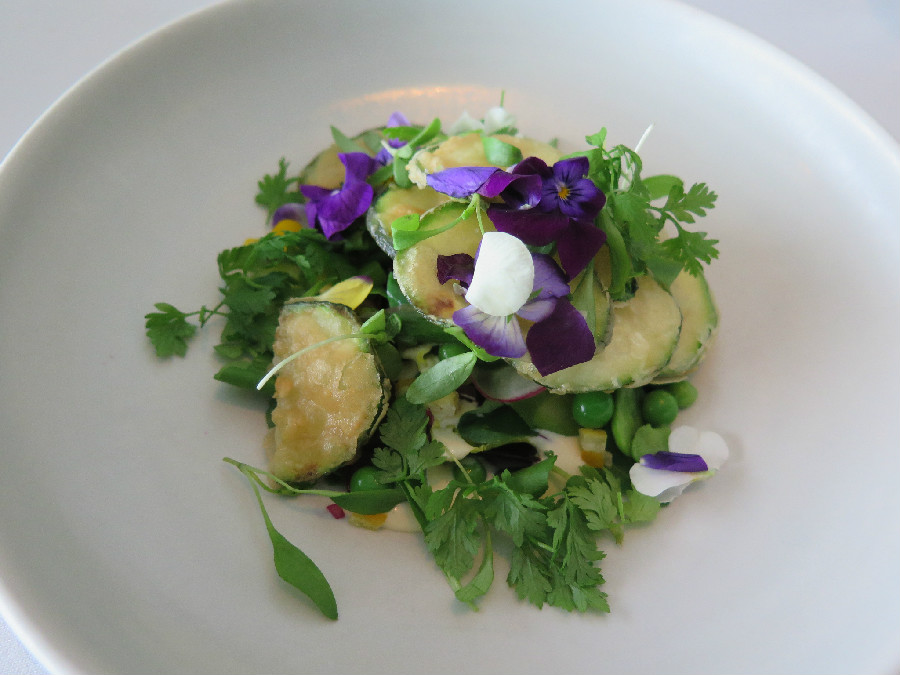 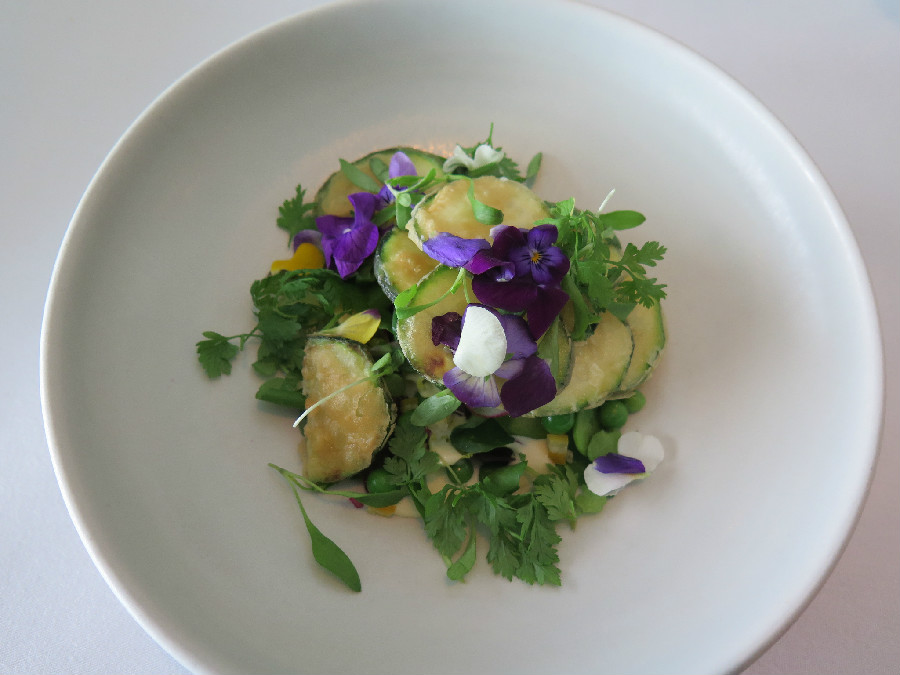 Both these appetizers showcased an expert western perspective towards vegetarian light dishes, hauling bags of flavour over the slender shoulders of those elegant ingredients. If the entire meal had been on the lines of these two show-openers, what larks !!
A cocktail I fancied from the menu - 'French Rose' - though I committed blasphemy because it has egg white in it - was one of the most exquisite-tasting, inviting perfumed cocktails you'll enjoy anywhere in town. Please drink this on your honeymoon. That combination of the heavenly 'French Rose' and the haunting mushroom broth dish is a food and drink pairing unrivalled in Auckland. 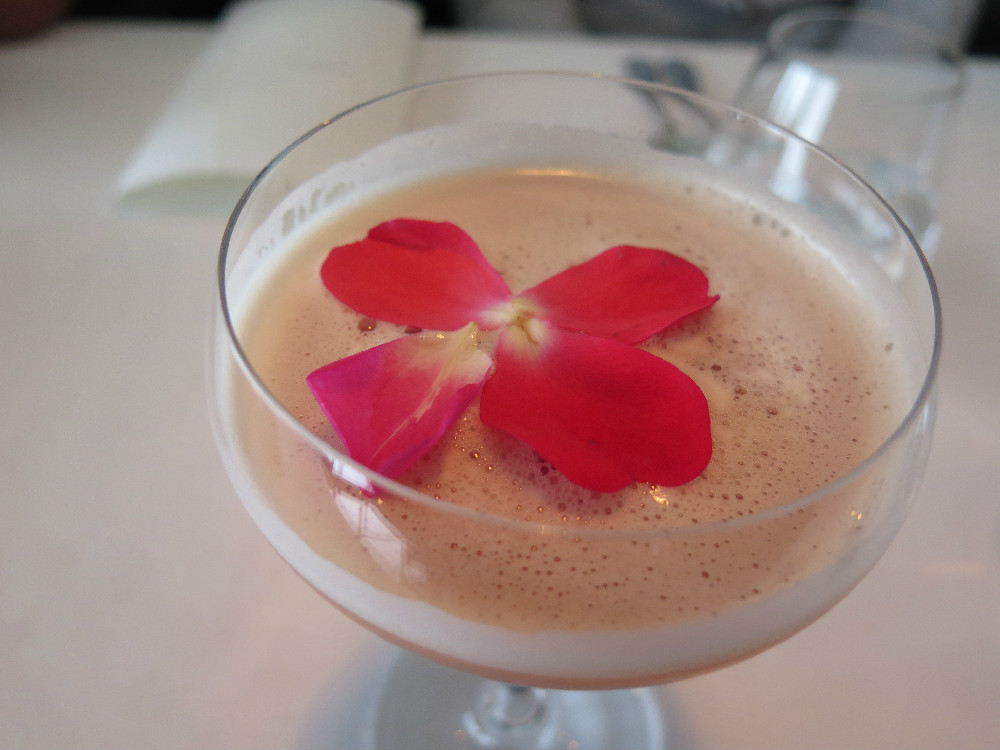 We were seated in the first room of the restaurant which is a nice one no doubt, but the one inside which I enjoyed previously has an engaging view of the kitchen through a wide window. The semi-al-fresco area just beyond it looks out onto the spare but pretty courtyard, and has the airiest and enjoyably convivial feel to it.
The kitchen's follow-through to that formidable starter-duo, was a presentation that paired small petals of beetroot with fresh curd, blackcurrant et al. It tasted inconsequential, like a forgettable accoutrement. I'm amazed how many chefs in NZ cannot integrate the wonderful, sweet, slightly vegetal taste of beetroot into a cohesive and successful larger dish. 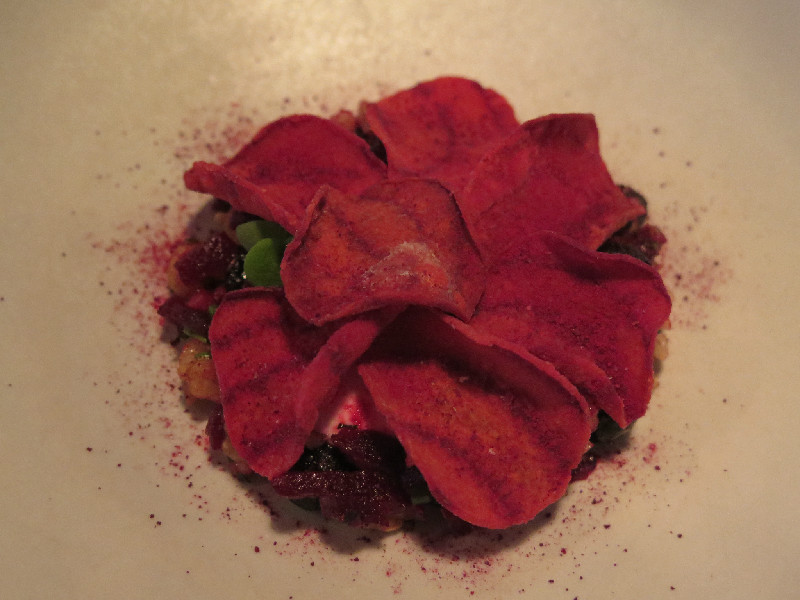 Service was excellent as usual (except for the caveat later on). Each time I returned to my table , the napkin would be neatly folded and mounted on the table. Once when it had fallen onto my shoes unknown to me, they noticed it, took it away and presented a new one. They pick up on small details - offering to replace my mayonnaise with another ingredient which I told them not to bother with.
For Auckland's fine-diners who feel they have been hit, over the years, by a relentless wave of New Nordic fluff and multi-faceted amorphous nothingness, Chef Simon reprises an old favourite after improving on it.  'Mushroom Tart' was emblematic of the self-effacing restaurant title 'French Cafe' - a creation utterly haute-French in its rigorous technique, superb looks and fetching taste. A perfect circle of red-wine sauce encased a disc of well-made pastry topped by cozily nuzzling medallions of mushroom, large and juicy, humming with pleasant umami. A crown of goat's cheese provided contrast that was not perfect but still harmonious with the overall symphony. It's the sort of proud presentation that is ideally suited to challenge competitors in the televised cooking competitions that have swamped us in the last dozen years. 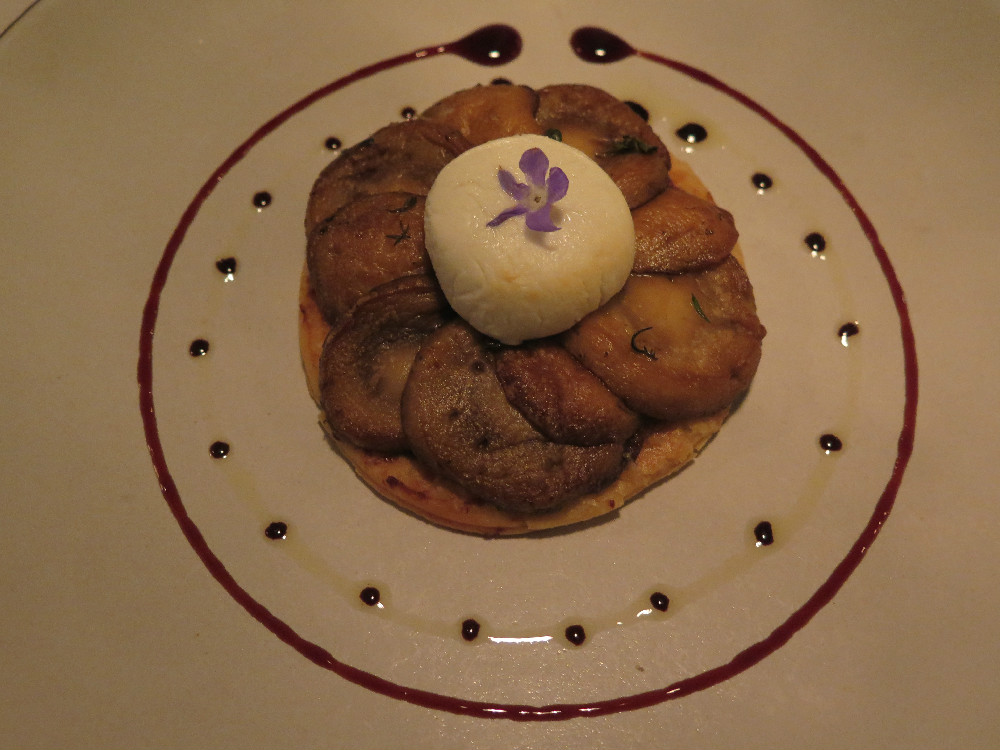 Two years ago, I had experienced one of the finest vegetarian mains ever when French Cafe had brunoised celeriac to comprise an entire risotto magnificently enchanced with truffle, mascarpone and brussel sprouts.The pale shadow of that dish capsized the fuller structure of my meal when it appeared as the savoury main this time : 'celeriac, potato and lentil risotto'. Precious little had been done to perk up the flavour and it was a dreary mash-up that I could not bring myself to finish. What on earth were the chefs thinking when they taste-tested this humdrum affair ? 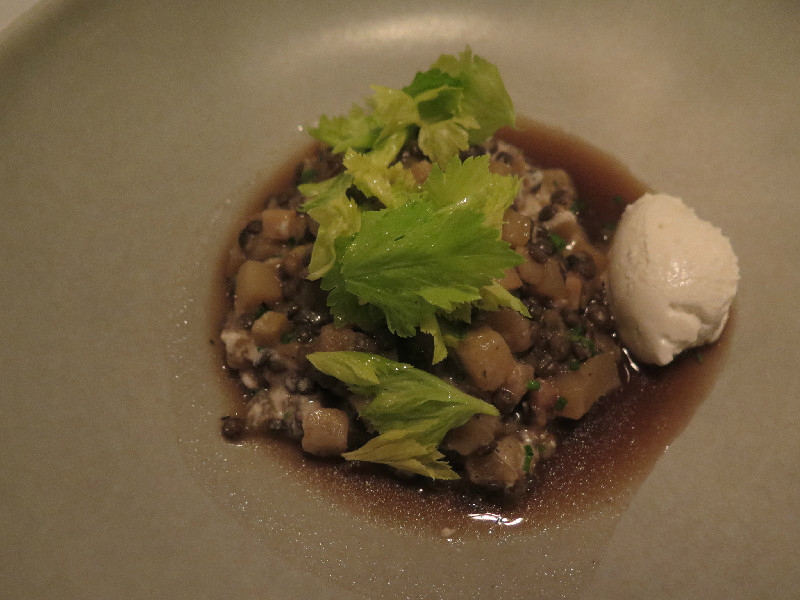 Pre-dessert: Raspberry Sorbet.
French Cafe has never dazzled me with desserts. They need to ditch their fixation with citrus, acidic and cream contrasts. This time, there was lemon curd, passionfruit and white chocolate which hid recurring but always pleasant pops of blueberries. It satiated but did not wow.
In terms of overall composition, I was satisfied with the meal's planning. What sunk the high expectations of consistent taste was that innocuous beetroot, lacklustre risotto and the  unremarkable dessert. In a six course tasting menu, there's not much room to mess up. 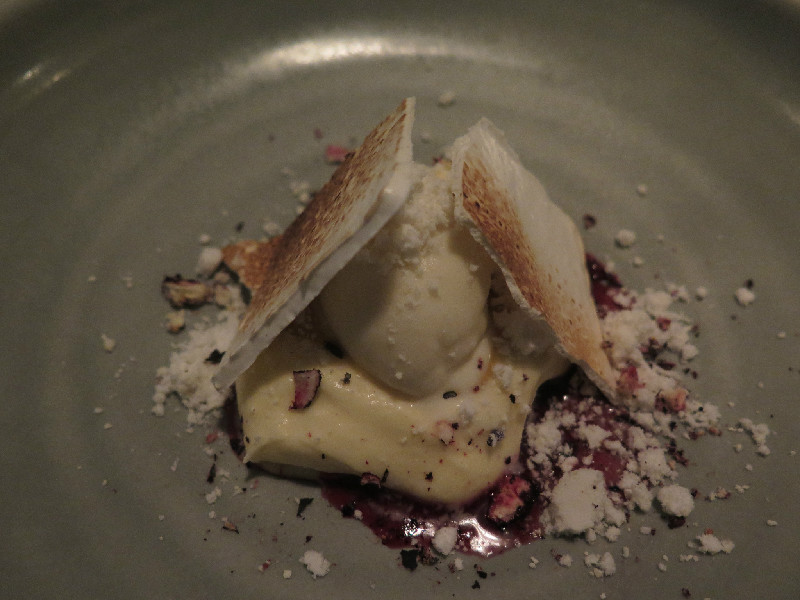 Unfortunately, at the night's end, there was no send-off whatsoever by the service team - a poor and lazy way to end assiduous service.
The restaurant runs such a profitable business now as before, booked for a fortnight in advance around the year, that I feel the chef has lost his drive to engineer new triumphs especially in the mains and desserts. The other big-gun of Auckland - Meredith's - had also left me unfulfilled earlier this year but FC undoubtedly serves better dishes overall compared to the former. Of all the fine-dining joints in town, Bracu in far-away Bombay has always excelled and performed better and truer than all its in-city brethren. Still, no Auckland chef I see is thinking like a visionary.
UPN
UPNWORLD welcomes your comments.