Yong Fa  :  Restaurant Review
2.75 stars out of 5 (Close to Good)
Mt Roskill, Auckland, New Zealand
Visited August to Nov. 2017
Three prior visits to this basic-decor wide-menu restaurant, all done later in the night, had revealed sparse patronage but a recent early evening meal witnessed almost all tables occupied, swiftly painting the picture of a middle-brow Chinese restaurant buzzing with big platters of myriad food. Dominion Road is dotted with so many Chinese restaurants but Yong Fa is surely one of the better ones, punching above its mien. Its bare-bones seating arrangement makes it much less attractive as a family restaurant but there are some orphan and rather elaborate decor touches like rows of tea and alcoholic beverages arranged in bottles-'n'-cases along one wall of the restaurant. In winter the place, with green-painted walls, can get really cold and drafty, and the shockingly tacky entrance is only "secured" by cut-up curtain-like sheets of translucent plastic. Their menu staves off the laughs.
Yong Fa's huge menu discloses a deep stock of ingredients cooked with confidence and delivered in good time. Chicken with pickles-'n'-chilli is a texturally satisfying full-flavoured dry dish, with most pieces deliberately incorporating soft gristle to interest the bite, but the avalanche of peppercorns and bell peppers is mouth-numbing. Similarly bracing flavours do not figure in the rather listless currents swirling in the party-size braised chicken hot pot with three varieties of mushrooms. You quickly realize that the generous portions (large dishes suitable for 2 to 3 people, reasonably billed between $20 to $30) make solo dining here only possible for high-capacity champions. 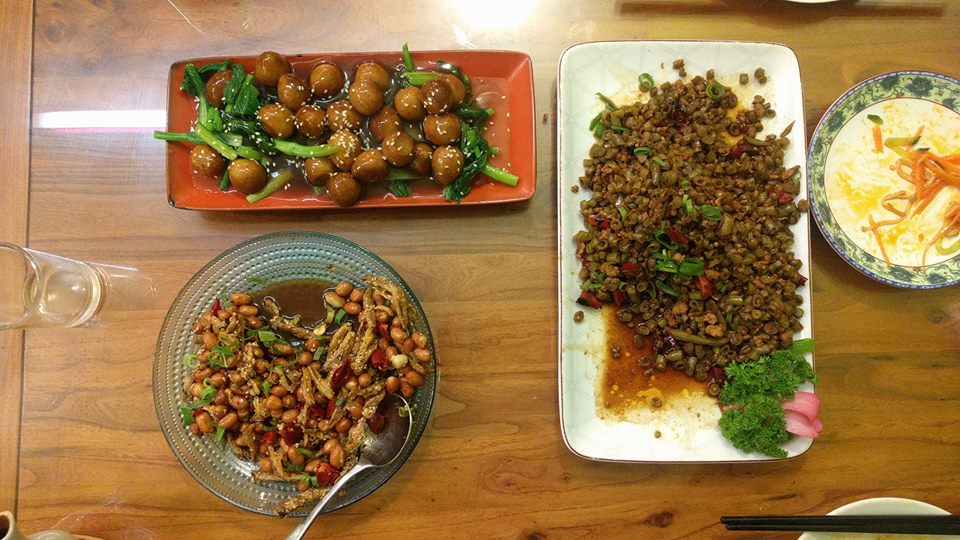 Service is better when a young lady (a variety of Chinese lolitas ply the place on different evenings) with somewhat serviceable English service skills is on duty. She tried to sell us a "buy 3 beers get 4th one free ! " offer, but as these were 620ml bottles and there was only one drinker at the table, the offer was declined with a view to not getting dangerously drunk. On a further positive note, she's one of the very rare few in a Chinese joint anywhere, who asks after the meal "Did you like it ?" (although I don't know whether my memory is playing tricks when one such remembered question was "Did it feel good?" to which, even if the meal was ho-hum, I'd be inclined to answer "It does now"). Sadly, all staff without exception, despite repeated reminders to give you some more time, expect instant early decision making about the orders !
The appetizers run into dozens of options. Fried peanuts with crisp fish was slightly on the sweeter side, with the latter ingredient being just very airy, crunchy wisps of fermented sardines so no real dirty umami there - much more interesting would have been to blend actual little morsels of fried fresh fish. To atone, go for the Deep fried chicken knee with pepper salt ($20) which is a crunchy textural winner, bolstered by crisp coating, the soft give and snap of cartilage, and scintillas of meat all building up to unique bite. It's served with gentle flavour-imparting interspersed lakes of little yellow crisps - fried flecks of flattened rice - as Chinese here as it is Indian on the other side of Himalayas where it's called "Chiwda". 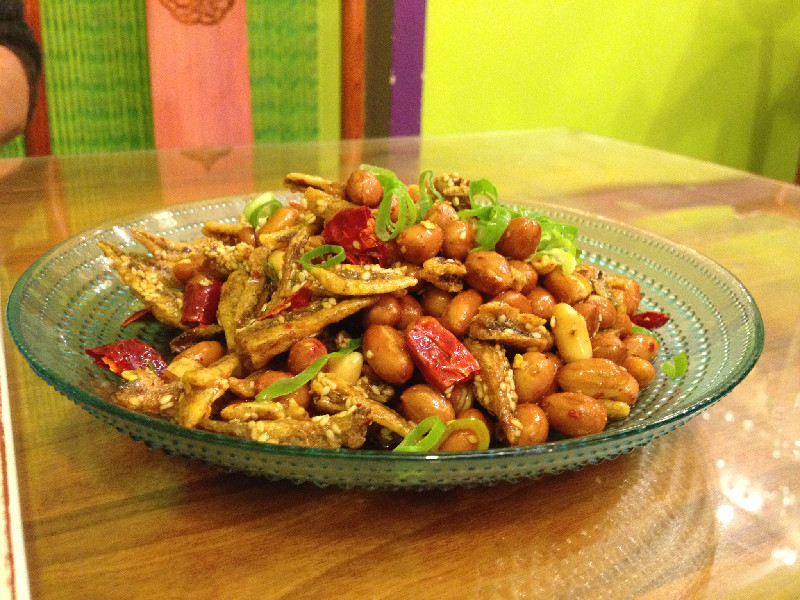 We landed there another evening much later at 10-40 pm (they close late), lusting for crab wok-tossed with chilli but the restaurant was ringing empty and the staff seemed packing up to go, so we were just happy to be somehow accomodated after persuasion. "No crab", the male waiter said quickly. I got the distinct impression he'd say neither "Did you like it?" or "Did it feel good?" at the end. "It's not the season for it", he added. Crabs are available all year but we deduced their dude might only feel the urge to go to the crab market in some particular seasons of the full moon (we could never pincer-down the crab here on multiple occasions).
Sometimes a single dish turns out so big that it is enough for four people, if you pair it with individual cups of rice, as it was with Stir fried beans with mince, ordered by my pal .'Twas successful cooking, with a sea of immaculately diced toothsome beans, with the mince adding fullness and savoury heft. Quail egg salad, at a very reasonable $12, had a remarkable quantity of two dozen eggs ! , excellently accessorized with sun choy greens to cut the creamy yolks, the only quibble being the slightly leathery integument of the preserved petites. 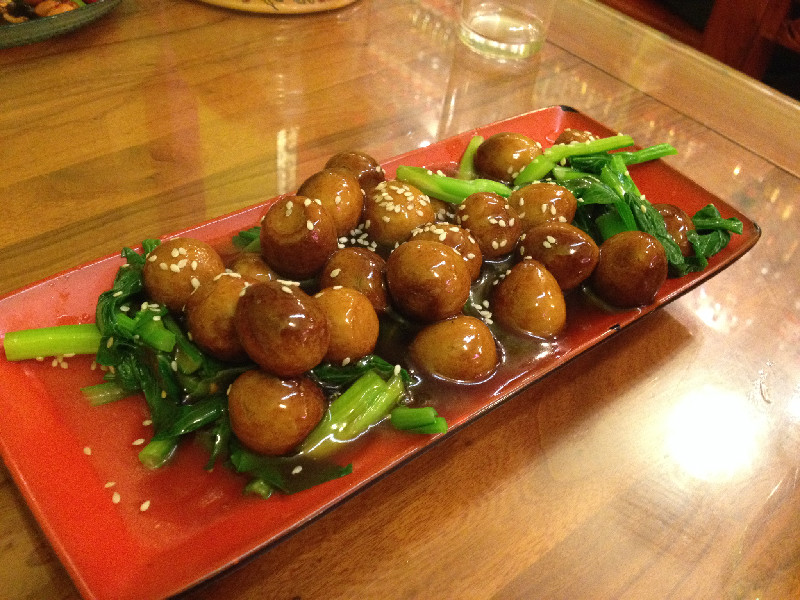 On a Friday evening , the place sported a preponderance of Chinese patrons, of all ages, which is almost always the case here, with multi-ethnicity not being a highlight even though the staff are decently behaved towards non-Chinese and the food has a wide-ranging deliciousness. My companion was surprised to note this, noting how many other Chinese restaurants do not manage to attract such a concentrated clientele.
Fish Hot Pot with fried bread is a big favourite here, and though it is generously portioned, its $49 charge was at least ten dollars too many and not quite the flavour riot others had pumped it up to be. Served in a steel pot with fire still lit underneath to keep the liquid bubbling, the broth was a mild sweetish concoction well suited to mopping up with rice, while chunks of fish, likely blue cod, had been admirably left bone-in to enhance the flavour. My friend had once ordered spicy beef with bamboo shoots. Some of you already know my mammal-sparing rule, now more than a year old, and yes it was completely barbaric of me to slaughter the rule and I hear some vestigeal critic in me reporting that the meat was tender with an excellent chilli sauce (not that different from Andhra style chilli chicken) avec exemplary bamboo shoots  of refreshing succulence. This vegetable is notoriously difficult to get right and I have had some positively awful Konkani versions of it (called "Keerlu") but these here even sported gentle aroma devoid of any bad funk. 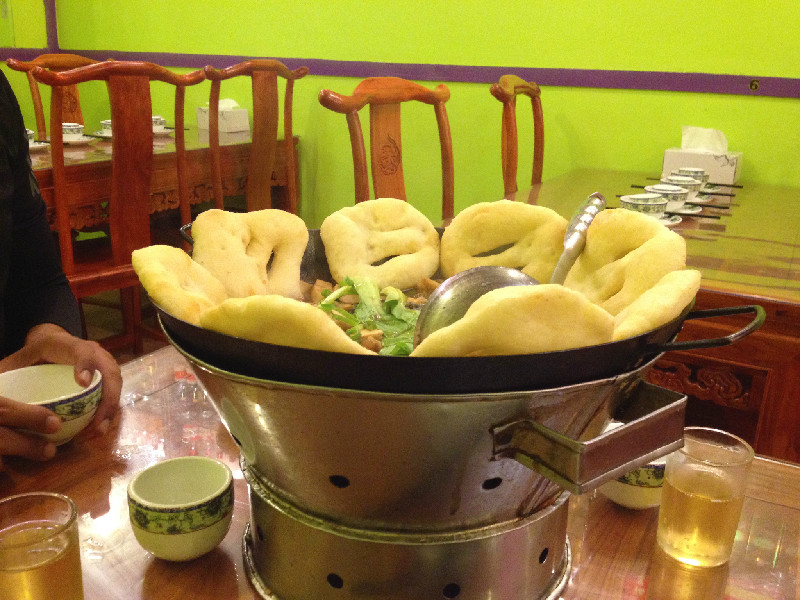 Home-cooks should note how pleasantly doused the Stir fried Chicken with Octopus was in a visually inconspicuous sauce humming with the zing of bell peppers and garlic. Succulent chunks of surf and turf dovetailed, the chicken soft to the point of being limp, while baby octopus had virtually no flavour (perhaps it will have never have it anyway) but it was at indubitably tender  (a major triumph for those who've endured the trauma of chewy rubbery octopus). I'm glad I have this joint nearby. Its song is mainstream in a way that would make the off-road punks a bit insecure, and it sings it complete with arias and twangs even when the house is near-empty.
UPN
UPNWORLD welcomes your comments.