This review is best enjoyed for formatting purposes on a laptop, not a smartphone.
Satya Spice & Chai Shop : Restaurant Review
3 stars out of 5  (Good)
Auckland , New Zealand
Visited Dec 2017 to April 2018
I play a little game when bringing folks to Satya Spice and Chai Shop. They are told that we will walk without stopping from one end of this commercial Sandringham stretch to another, starting with a butcher shop and ending at an Indian grocery store, and they should tell me which place we are going to actually enter. Three out of four times, they missed the spot. It's not really their fault - the entrance to SSCS is so inconspicuous that you'd think it's just a doorway to a storage room. 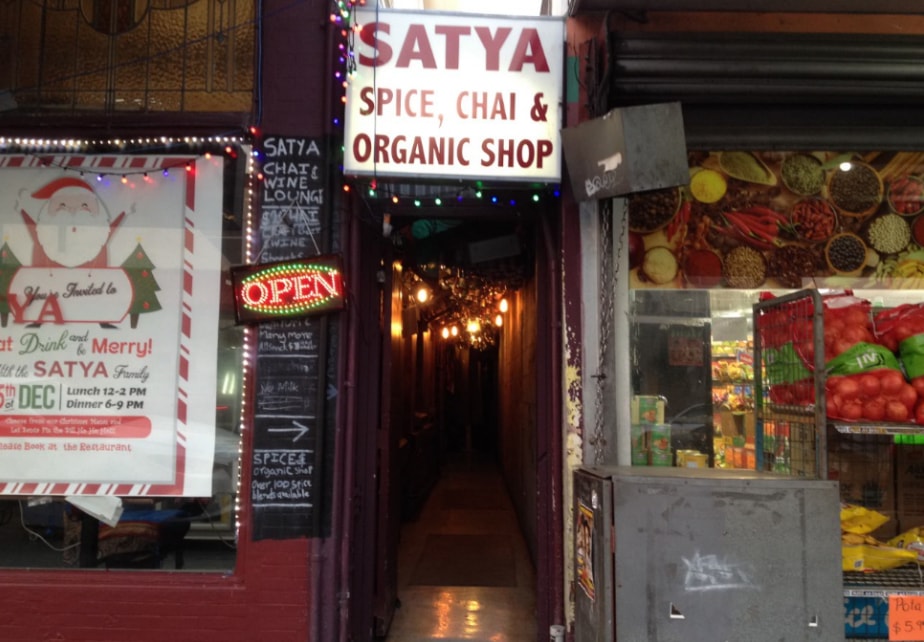 The long narrow corridor which leads in, is hemmed by rough concrete and festooned overhead with hundreds of beverage cans. You'd not be mistaken in wondering that there is no coming out once you enter. Inside is a cozy place that hippies amongst others would love - a one-of-a-kind in Auckland. The roof has dipped curves of jute-sack from which some sunlight percolates, little plants hang from above and the walls and petite furniture are wooden, with some little barstools luxuriously upholstered with a covering of that jute cloth. An interior room, a soothing sanctum especially when other customers leave you alone there, has a wall of exposed brick - an architectural element carefully included here because without it most hipster-chic restaurants would cave in. 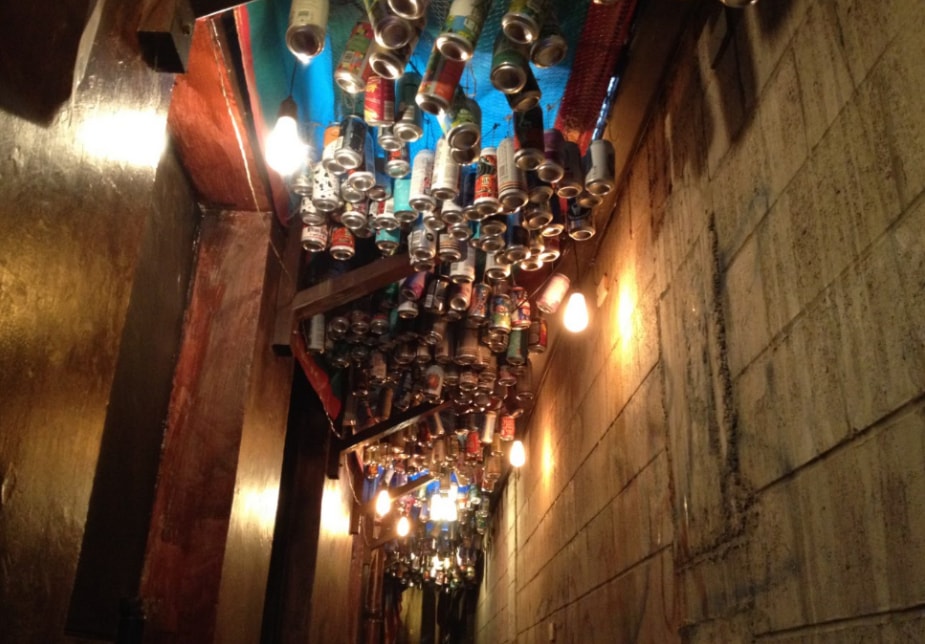 The menu may lack main courses but remember this is a 'spice and chai shop' !  'Kurryaage' is a lip-smacking creation of crunchy coating which wraps over little folds of succulent chicken, made zingier with sprinkled chaat powder while spiced mayo brings welcome creaminess. If you thought this rocks, wait till you sample certain other appetizers. Their chilli chicken has meat of stunning quality, sublimely tender, the chilli benefiting from just a gentle touch while a little conspiracy of rounded flavours swirl this dish to the very top, besting even the excellent chilli chicken from the nearby Mt Eden's Indian Lounge. Chicken Manchurian is no less, glowing gorgeous with attractive orange, the deep-fry-and-then-wok-toss process which fails so many other chefs, expertly rendered here with the crisp-soft balance spot on, the Indo-Chinese flavours robustly smouldering. 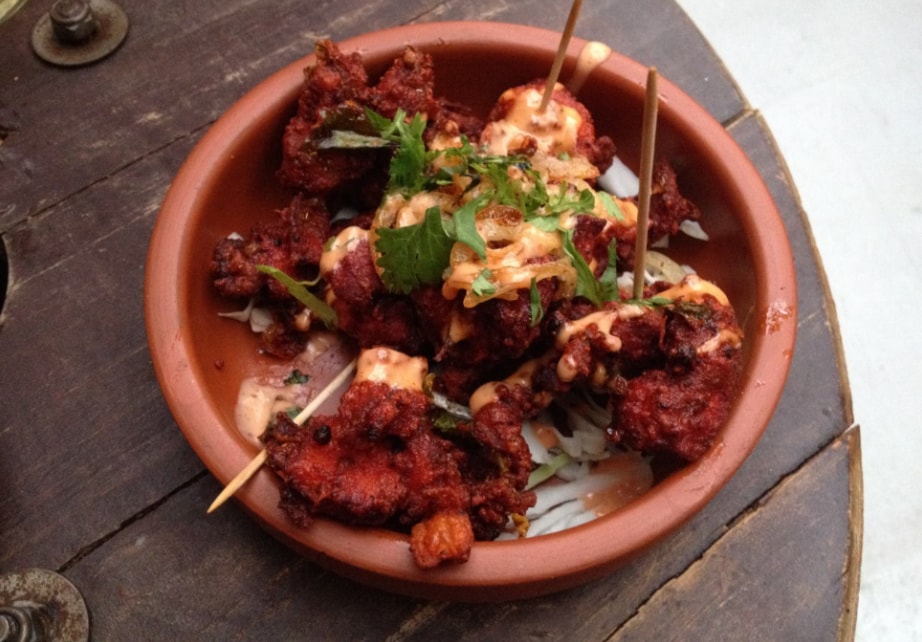 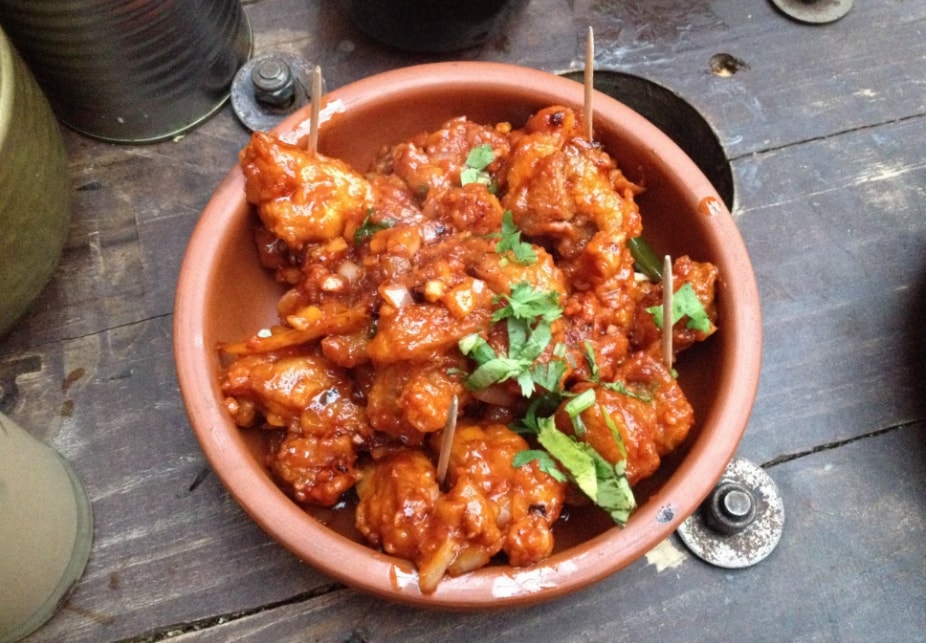 The place fills up with all kinds of folks, of myriad age groups but with a slight tilt towards the fruit vert, the atmostphere breezily but quietly clubby. Trundling out on a Thursday night after a solid feed, we were beside two elderly Pakeha couples outside, with them remarking that it was "the most lovely" meal they'd had in a long while - I wanted to butt in and shake their hand but behaved myself. 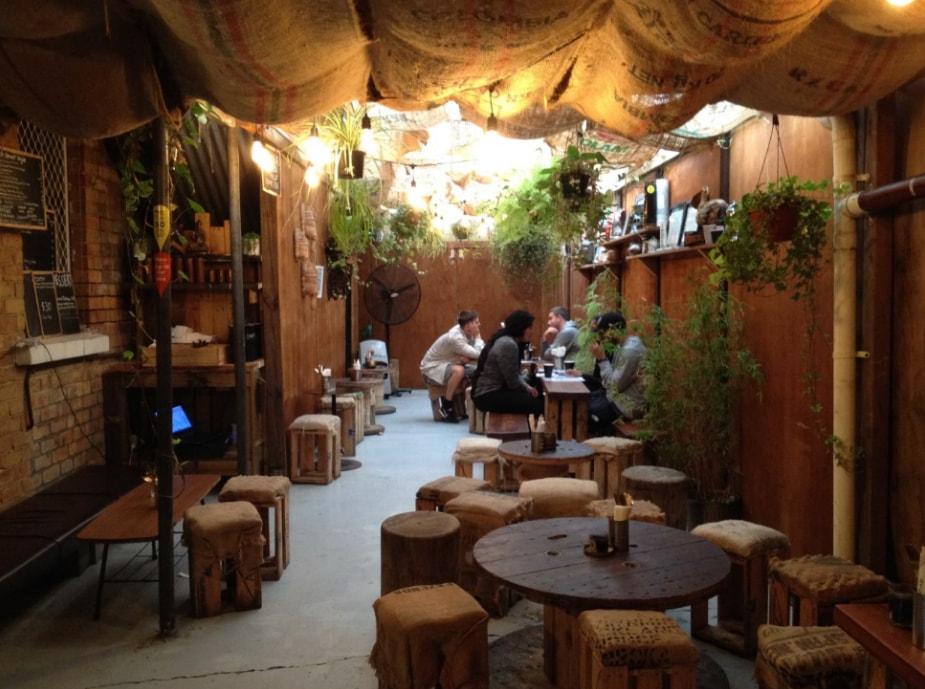 They stack a deep alcohol reserve - from unique cocktails like 'Vieux Curry', 'Dark & Stormy' and 'Ramos Chai Fizz" to an off-the-menu caboodle of cabinets with craft beers from all over the world which you see direct-on-the-shelf and select. I tried their 'Hard Chai' - a blend of cold milk tea and cognac and while it wasn't spectacular, 'twas harmonious. 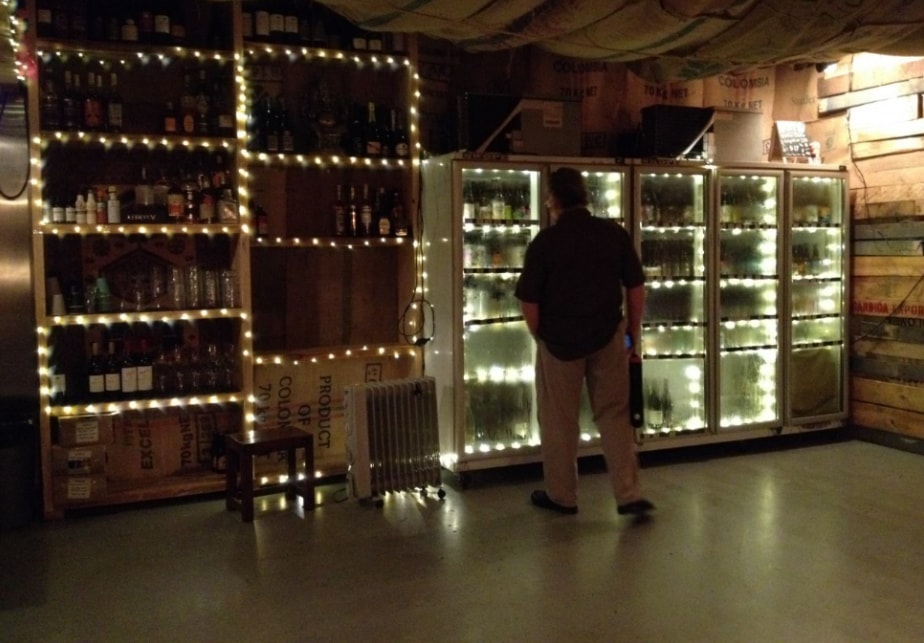 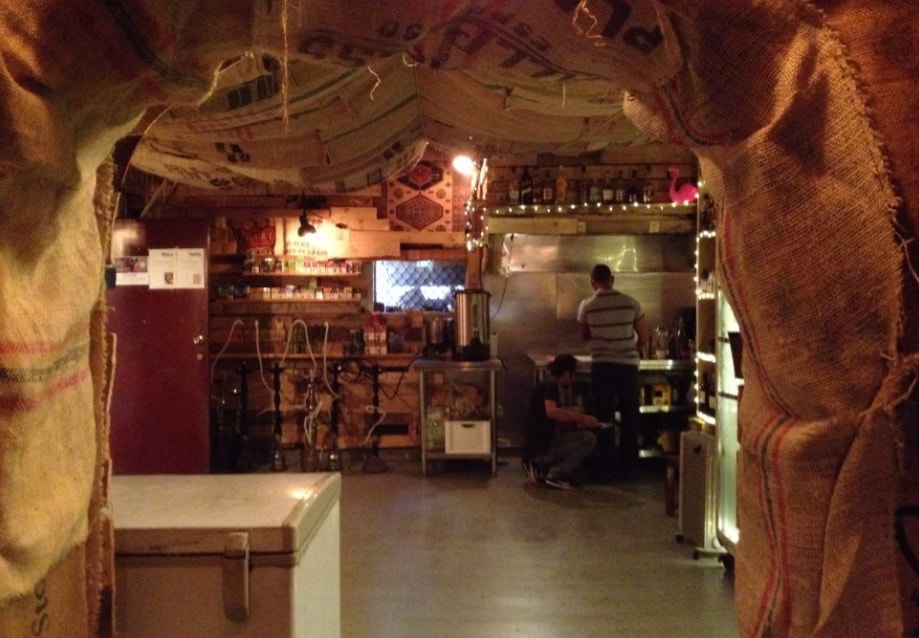 Chicken Fried Rice here is a  a hearty riff on the Indian innovation of Manchurian Fried Rice , the rice nicely smoky with green capsicum, soy sauce and rice vinegar, with toothsome bites afforded by little cubes of batter-coated shallow-fried chicken.  "Curryflower" however, de-bloomed with hunks of fried cauliflower in listless spices. After the initial high of finding a joint  like this with many tasty treats, the hits and misses then begin to get more noticeable. 'Crisp Prawns' adverised as 'tempura-fried with Indian-spices' looked huge but a good part of it was batter, with the tempura vapourized, the bites heavy with dull Indo-Chinese flavours while the prawn essence was smothered. Achhe din returned with Chicken 65 - succulent pieces, superbly marinated in a tangy yoghurt-based mix, sharp with the edge of spices led by curry leaves.

The chef is from Vizag in Andhra Pradhesh and the touch of a seasoned Indian chef shows in many dishes, although I'm not sure if his sure hand always steadies kitchen. Amongst its other attributes,  Satya Chai Chop is also unique in that they maintain consistency as often as they lose it.  A re-visit of the formerly wonderful chilli chicken disclosed a less-than-ideal rendition the second time, hewing more towards the less balanced " Schezwan sauce" flavour found in certain Indo-Chinese mixes.
When a young bespectacled gentleman is at the counter, the front-of-house runs smoothly, and he is politely pleasant when attending to you. When this show-runner has gone out temporarily, service suffers, as it did on our last visit there. It was a rainy Saturday afternoon, the place unusually deserted and a new man at the counter was least interested in attending to us. With three appetizers requested and two having arrived, we then asked him whether the third appetizer could be brought in later on to prevent crowding. He nodded and rushed to the kitchen. Their chef-recommended 'Veg Manchurian Dumplings' when it arrived at a later stage as requested, was disappointing - lukewarm, the "dumpling" element disappeared, stodgy with most of their crunch gone, these being merely the spherical-fritter wok-tossed 'Veg Manchurian' which is a familiar Indian creation. My companion wondered whether these were microwaved before being brought in. 'Twas likely a failure of communication on their part - if it is too late to postpone the cooking of dish, just tell it to the customer and bring in the hot dish rather than letting it sit to be served later on.

The best, most technically accomplished dish here is perhaps not found anywhere elsewhere in NZ, at least not to this high standard - Idy Fry. Idli is a foundation breakfast dish of South India - steamed rice cakes, pillowy soft at their best , best paired with coconut-based savoury chutneys. Here the spin was to deep-fry them, and it was done with such lip-smacking finesse that it would make any Indian, French or Japanese fry-master proud. I don't have the heart to tell you how they tasted on another occasion. My pal initally asked whether they were roasted cubes of potato - so nicely did they maintain their shape. Handsomely crunchy on the outside even several minutes after sitting on the table, there was just a subtle but precise seasoning on the outside, while the interior gave way to soft warm roasted rice cake. 'Twas very sensibly paired with a mildly spiced coconut-based white chutney - this was as just as well because if the latter had been akin to  the killer green chutney from Bangalore's S.N Refreshments, I would have climbed the roof and howled in ecstatic delirium.
UPN
UPNWORLD