AMONGST NZ’S BEST IN PURE CUISINE

“Ahi” in Auckland C.B.D, born in the middle of a life-changing pandemic, beckons the connoisseur with the return of Ben Bayly who is amongst Aotearoa’s best chefs. Plying his craft for other proprietors before, he is now the co-owner of a restaurant that declares its “homage to both our special local ingredients, and the people who harvest, prepare and serve them.” Many of Auckland’s top restaurants have folded in the last decade – would Ahi move in to fill those rarefied echelons ?

‘Ahi’s ambience is another example of how chic-casual with good production values is now the new haute in Auckland’s fine-dining, continuing the trend from Harbour Society and Mr.Morris. Luxury-phobic folks relax, the tablecloth remains flung into the carbon-neutral closet, the floor is polished stone and an impressively large lattice of wood slats form the ceiling. Apart from the spaced tables, two long lines of communal seating run parallel, beyond which beckons an ample gleaming bar. Views of the harbour are decent but limited from its second floor location.

Service in my first visit was fine, with more than one server attending to me through the afternoon and I was about to dial down the place for service that does not quite match up to the distinct level of the cuisine, when things changed markedly in the second visit. I am neither Ruth Reichl nor Jesse Mulligan, so let’s give the benefit of the doubt to Ahi.

Te Matuku Oyster as a starter was superbly fresh and silken smooth. ‘Chicken Scallops’ were a good feat of chef-driven engineering but these natty discs tasted more of egg than chicken, the plate’s unexpected highlight being a stunningly umami-rich yellow-hued crumble of flakes cresting the mayonnaise. Chef Bayly has apparently hit upon a winning formula of deploying concentrated, dehydrated flakes of the main’s ingredient’s essence, amplified with other taste typhoons like “garum” or fermented sauces, used to riveting effect too in the menu’s quail dish.

Welcome table-side theatre transpired in a very creative “Ramen of Paua Boil-up & 2 Minute Noodles” as the waiter poured the broth into a loaded bowl. The taste may not blow you away but the ingredient foraging was inspiring. “Lions’ Mane” Mushrooms with their tripe-like laciness canoodled thin slices of faintly sweet, marine-whispering Paua (abalone) all nestling in a serviceable crayfish broth. 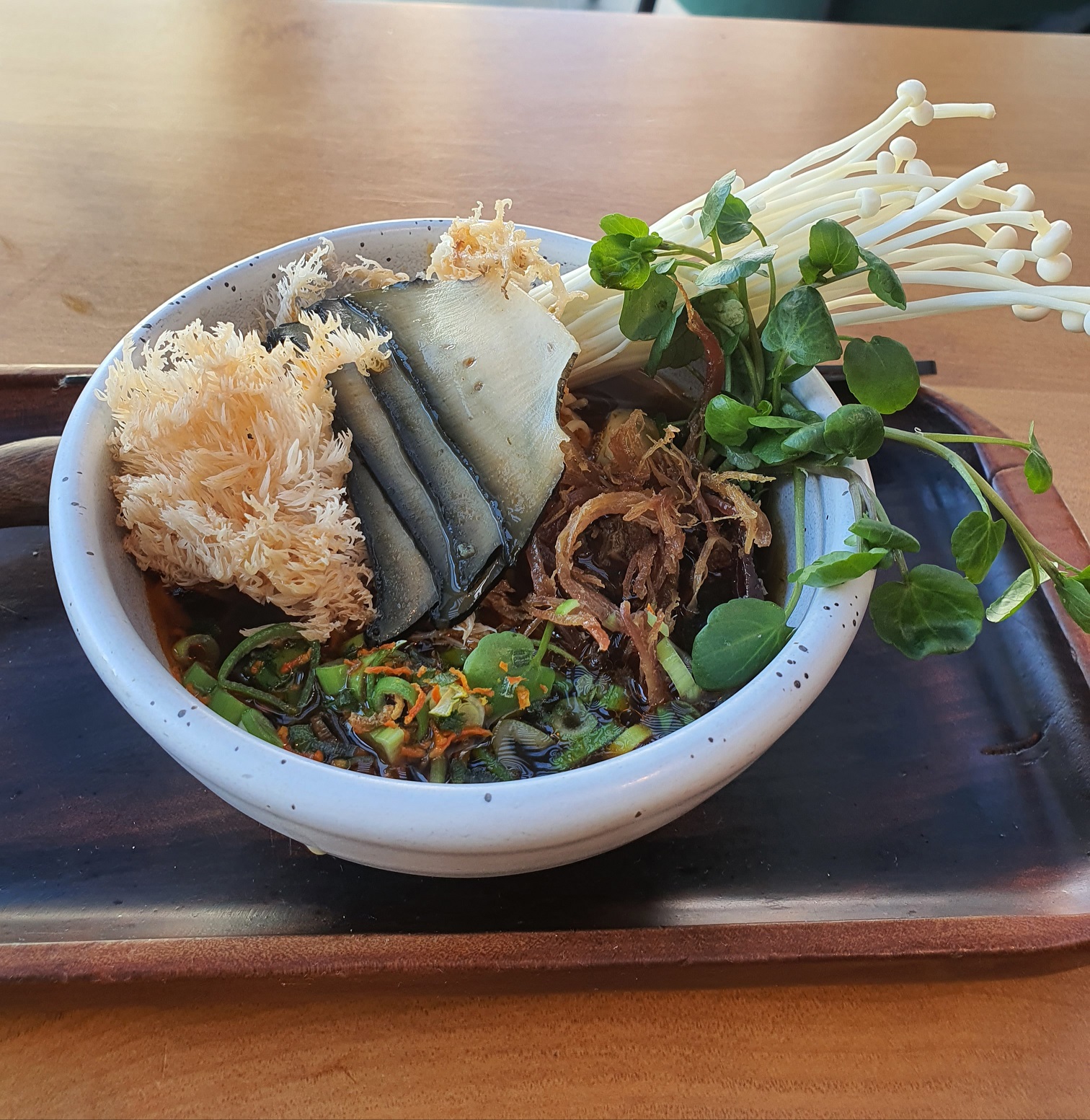 The restaurant on that Sunday afternoon had some time to spare, with the tables mostly occupied by youngsters, the same age profile applying to the waitstaff. Ample post-meridian sunlight percolated into the spacious room – a nice chic elevated spot for lunch near the urban waterside, but one which is not really geared to have prestige tables and ambience for that special date or anniversary.

The crowd was just beginning to pick up three months into another flare of a two-and-a-half year old pandemic which people, most of whom are fully vaccinated here in N.Z, now seem keen to end socially.

The main course, thank God and a resurgent St.Bayly, was a tour de force of magnificent quail. You’ll see the claw on the plate (if one dislikes it, vegetarianism is always there) – both leg and breast were exquisitely cooked, the latter in particular singing of meaty succulence, suffused with cooking jus, and topped with a funky flavour bomb of finely sliced nuts and garum crumble. 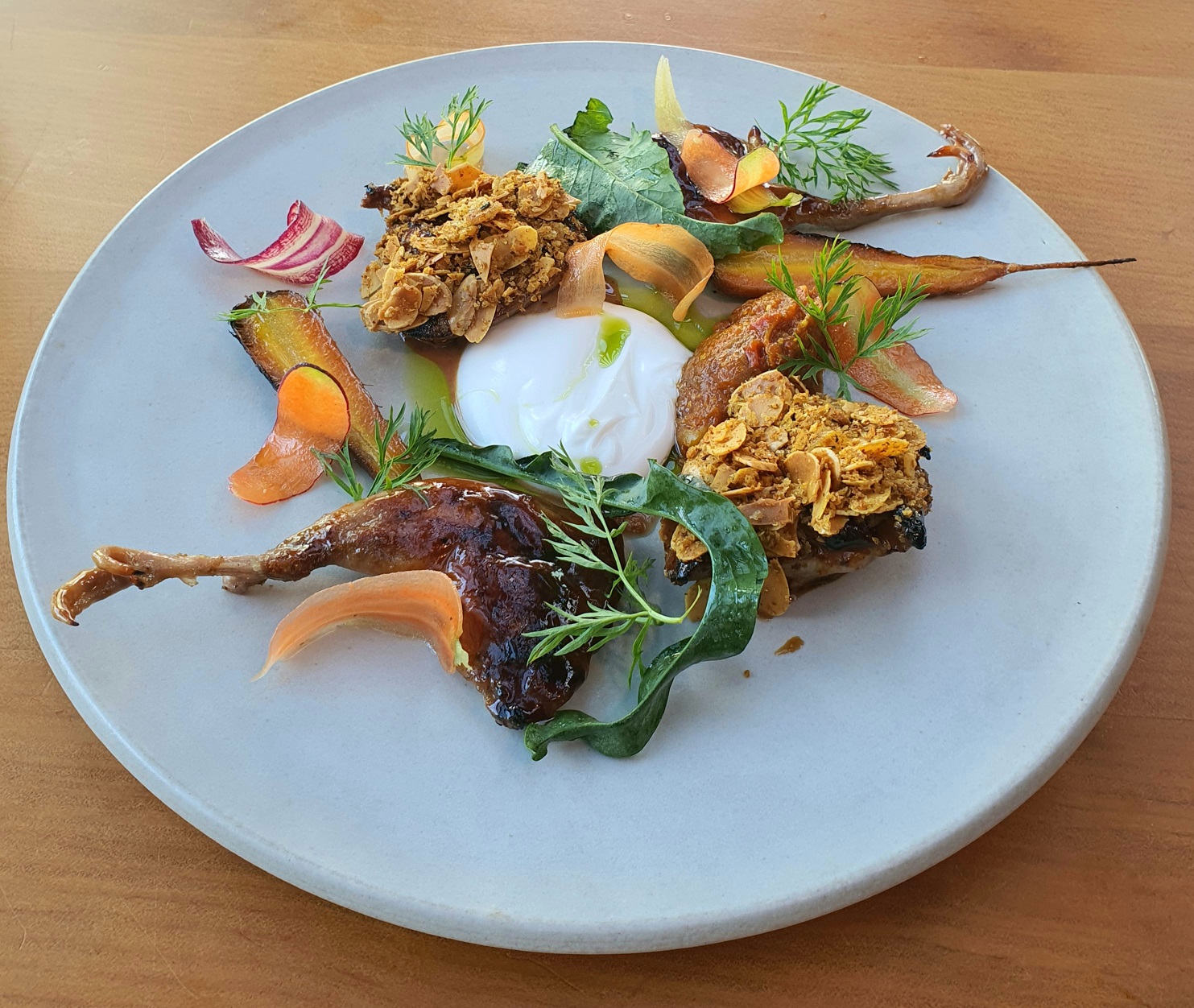 My selection of an ice cream cone for the first dessert may not have been the most adult of choices, but as if to compensate, the cone came planted in a daringly large horn of a buffalo. The crest of the topped cone had some lovely perfumed sweetness swirling, but then gave way mostly to buffalo milk ice cream that was very smooth and soothing but not quite the stuff of memories – a rare but notable case of the horn giving more bang for buck than the udder. Campfire Banana had blackened skin peeled back to reveal custard-like flesh, paired with salted caramel and vanilla ice-cream – a boldly humble gamble that didn’t quite pay off in its ho-hum interplay. 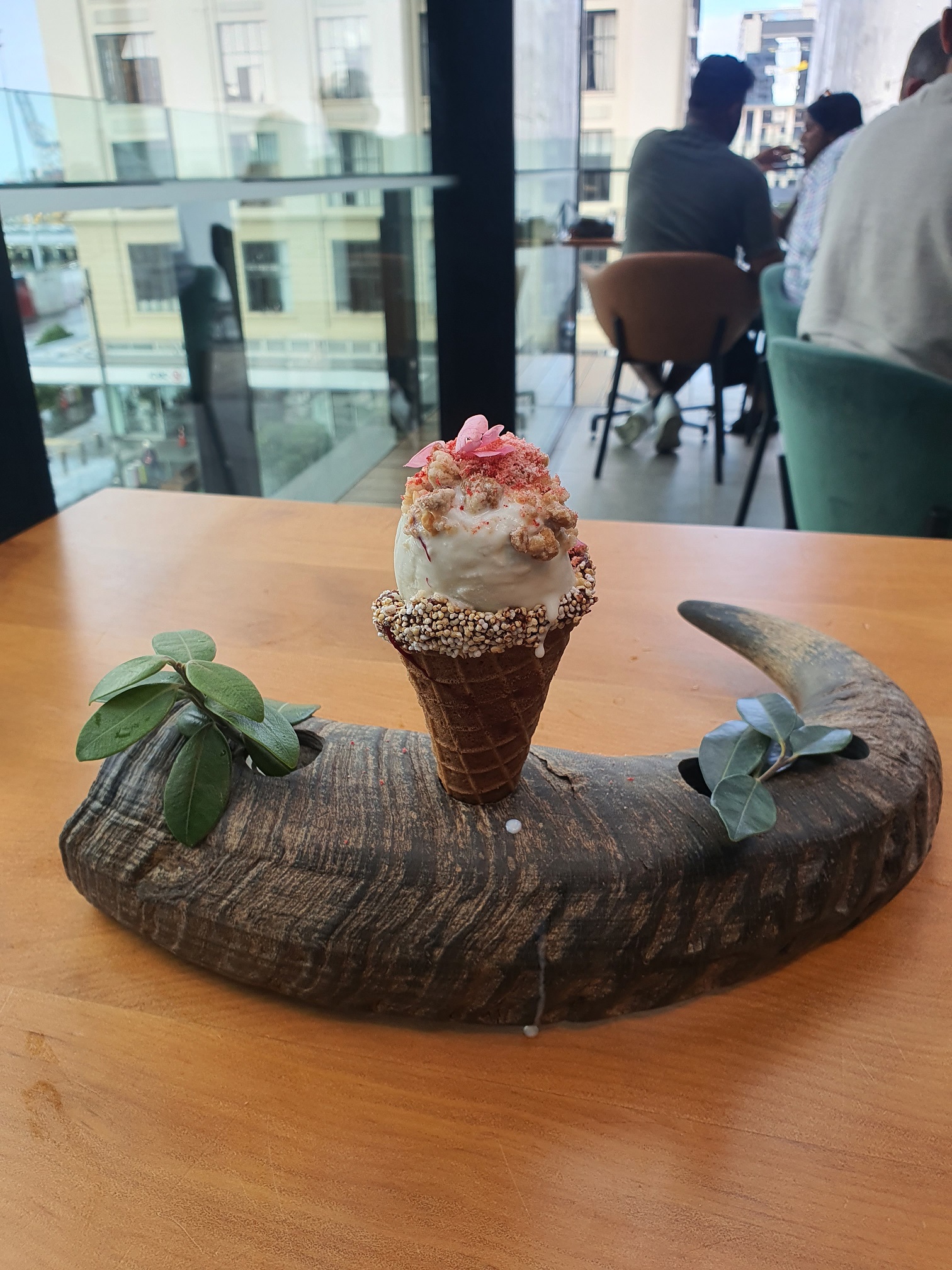 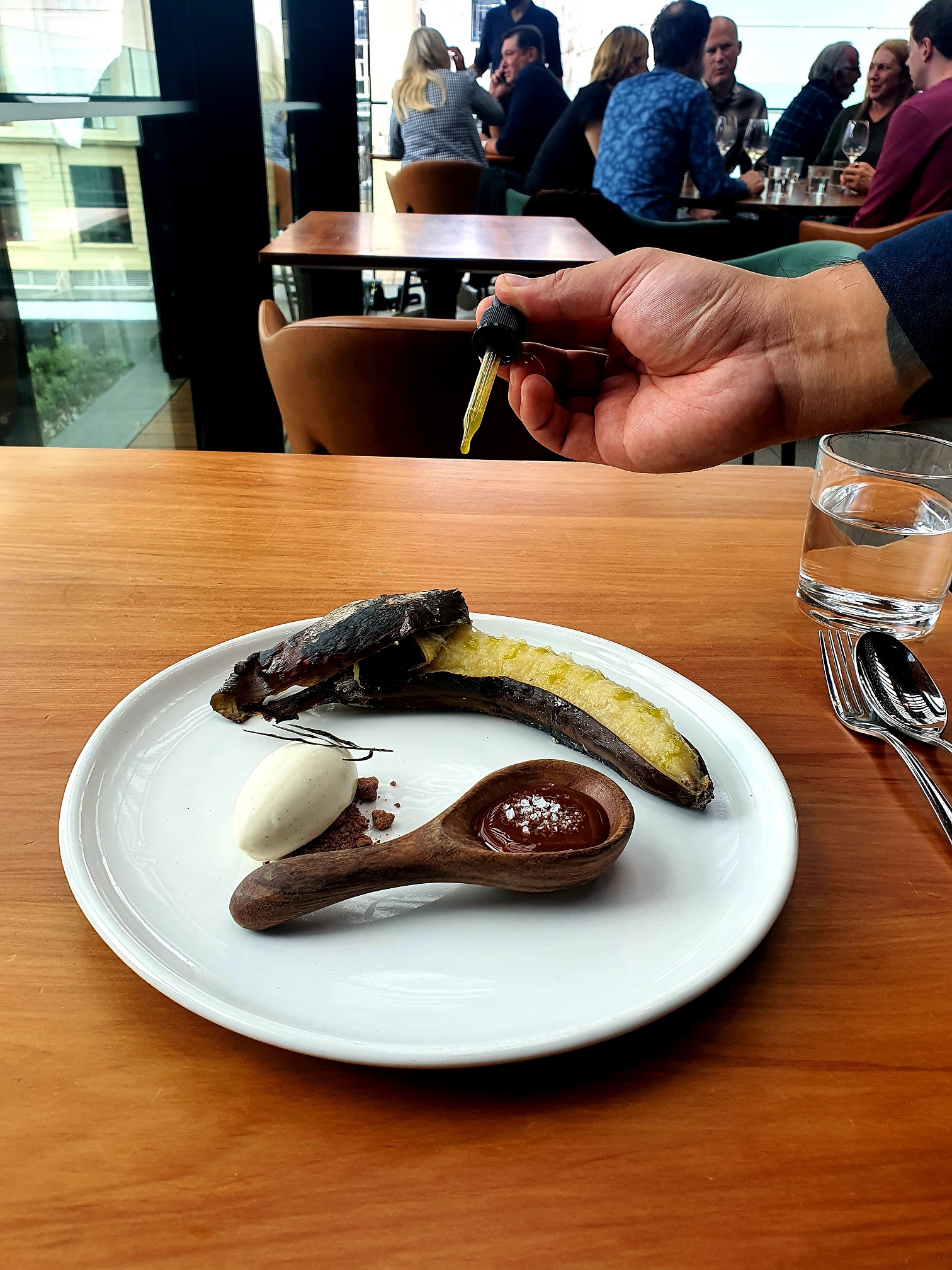 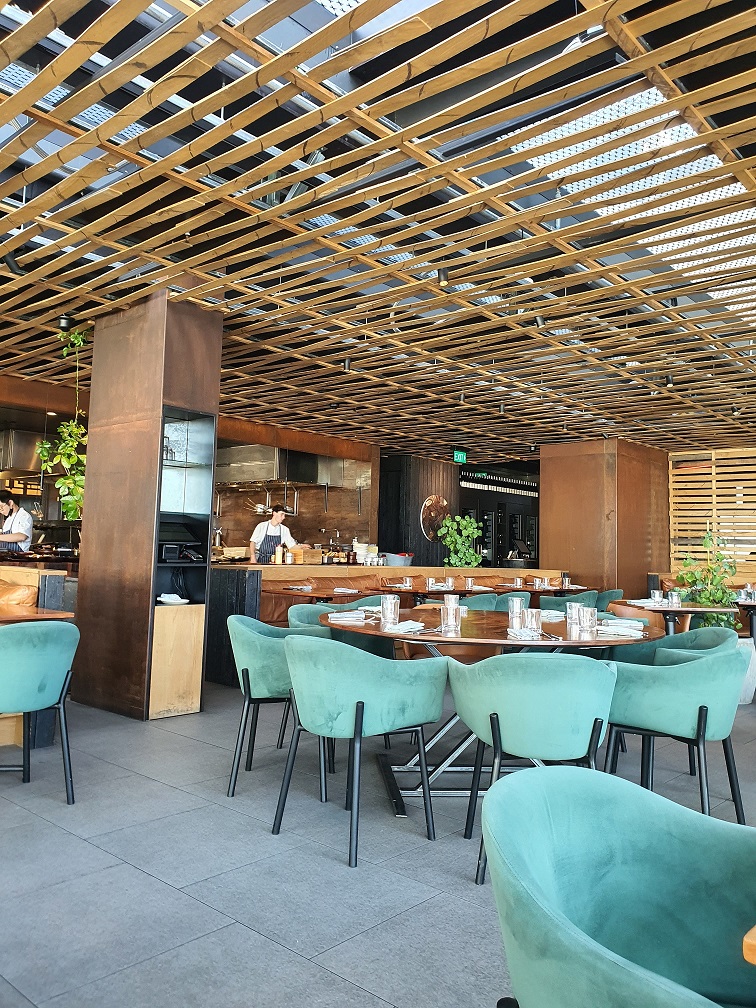 Similarities in Chef Bayly’s oeuvre from his previous Grove restaurant to Ahi are seen in his fondness for shellfish in starters, seafood broths being poured table-side to finish multi-component bowls, and luxuriously rendered game birds like partridge, pheasant and quail. Whereas in Grove, his style was tailored to be classically European fine-dining with ballotines, creamy mashes and lush red wine sauces, here those solid techniques are comfortably there but superseded by a local ingredient-driven ethos that is very much in both printed and practical evidence.

The second visit, as if to mock my dining room observations from the first, saw a packed house with more than forty diners from my viewing arc and more beyond. And this time, the majority were those who’ve been around the temporal block a few times and have more experience with how the globe rolls.

For service this time, just one young gentleman who looks like a slightly older version of Harry Potter (that is by no means an insult) and bears the same real-life first name as the actor, attended to me throughout and he was assiduous in his attention and pampering, totally lifting my service experience.

Scampi Corn Dog, a fun idea, alas had tasteless scampi, the accompanying burger sauce tasting better, while Korean fried Longfin Eel was similarly muted although it did mirror a fresh, top-quality chicken nugget. Octopus was superbly BBQ-miso roasted, the soft texture again trumping a hattrick of lost intrinsic taste, but in an upgrade of surf-‘n’-turf to tentacle-‘n’-tendril, it was visually paired with the curl of Pikopiko stems – an iconic NZ symbol that is seen a hundred times more than it is eaten (grassy and a little bitter). 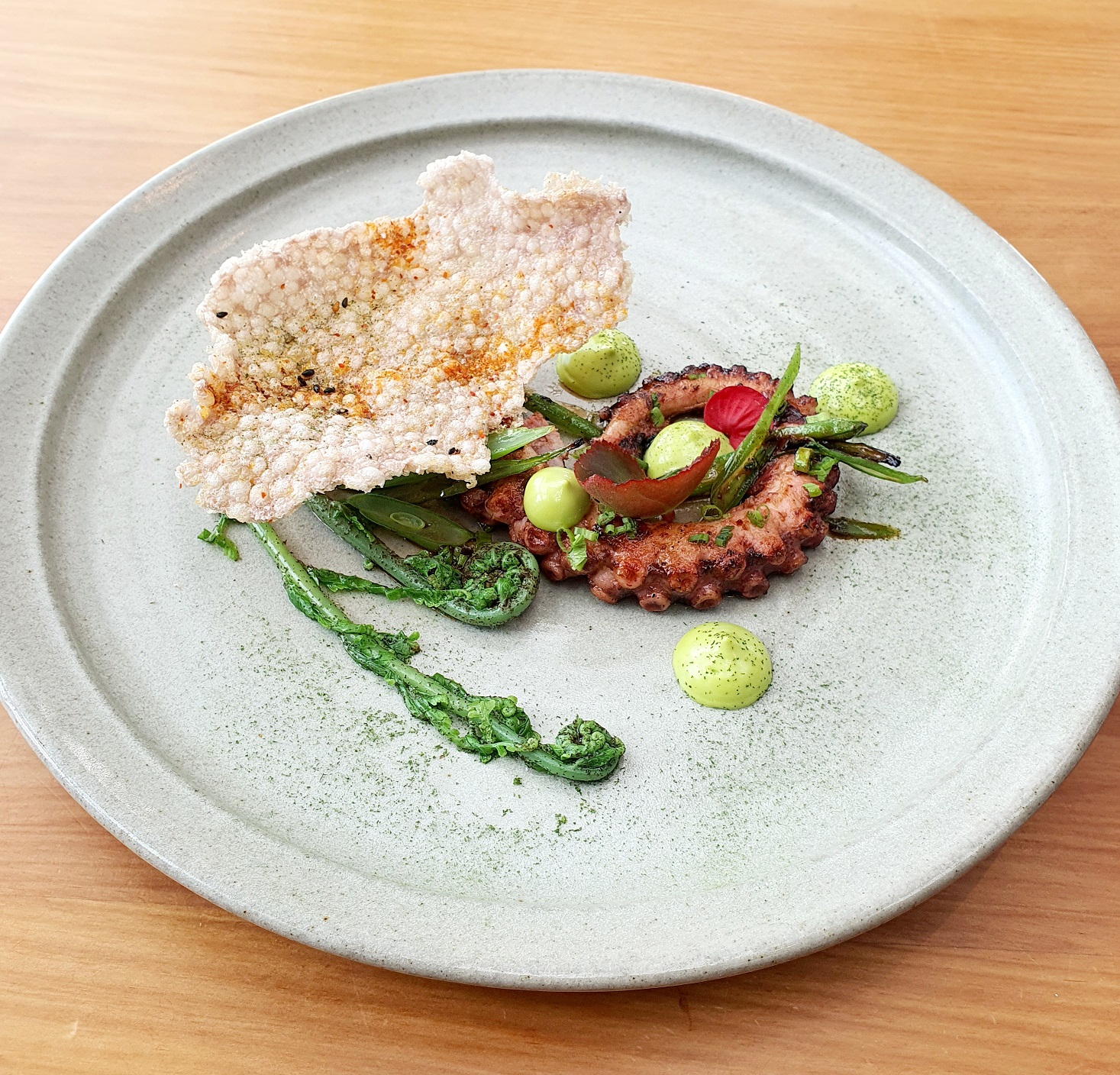 Alain Passard of the famous Parisian L’Arpege would hug Ben Bayly for showcasing Tula Tomato Flower – a thick disc of deliberately under-ripe tomato coaxed into softness but lacking the resonant flavour that the best of this vegetable can give.

The game-changer was a seafood main course that is the best fish main I’ve ever consumed in N.Z. That along with the quail main and stepped-up service, sealed the deal. Blue Cod, likely cooked sous-vide, was silken soft and retained its redolent marine flavour, paired with a fennel sauce that was a slew of pleasant paradoxes – as mild and light as it was profound and unctuous. Parsnip was gorgeously roasted into mellow, sensuous appeal (potato has nothing on this) and toothsome bite went on to ricochet between excellently fried mussels and crisp fennel ribbons. 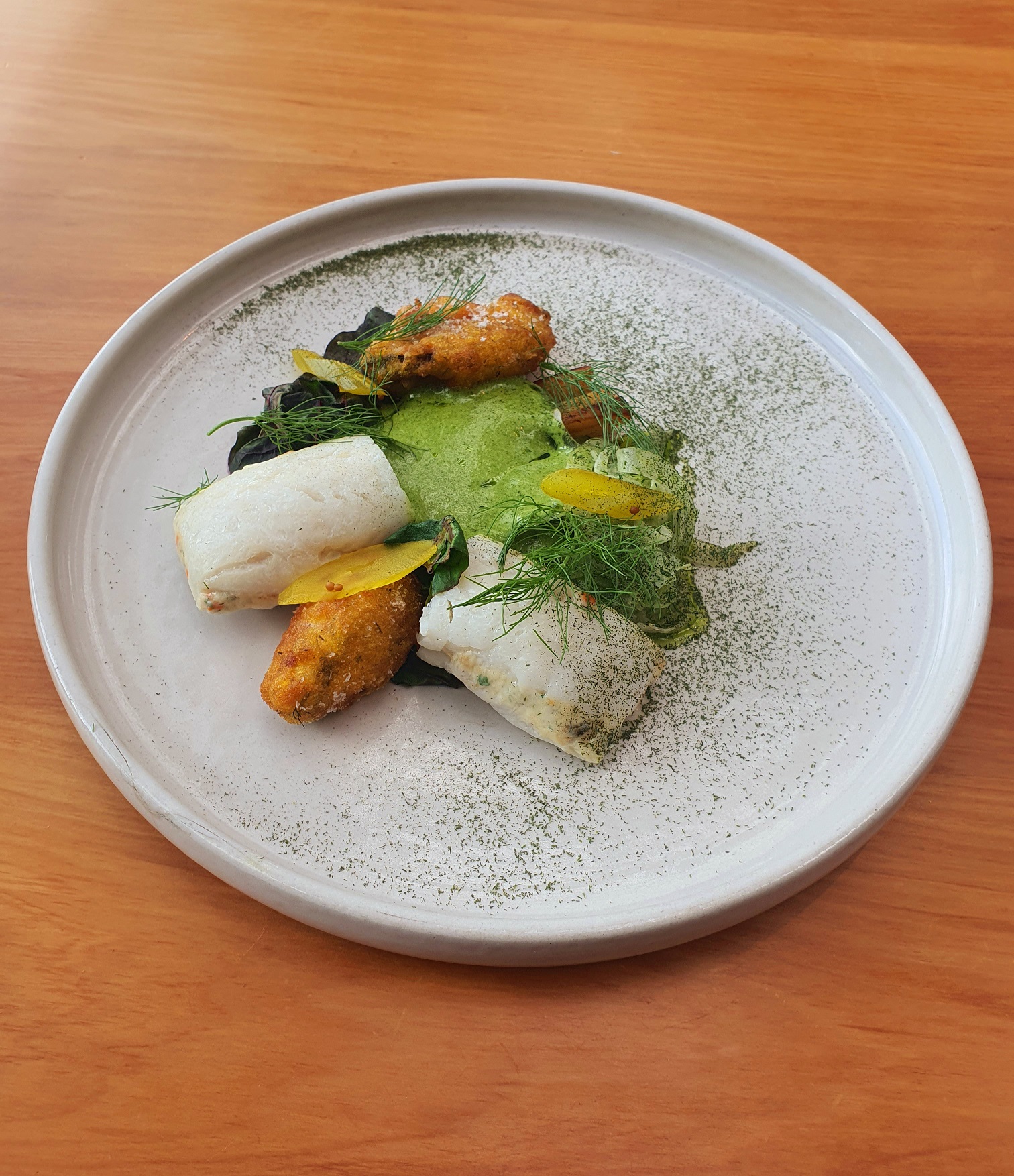 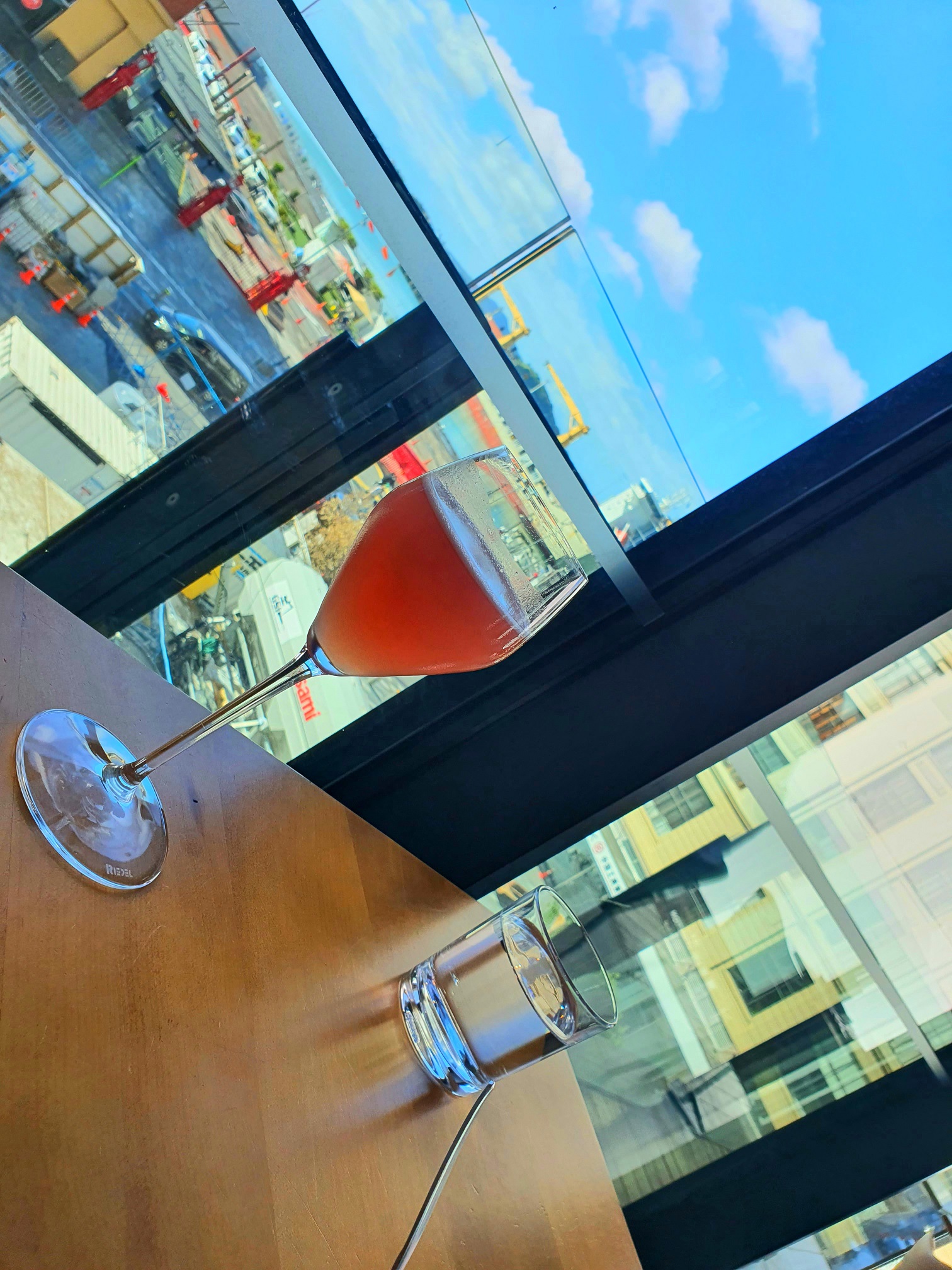 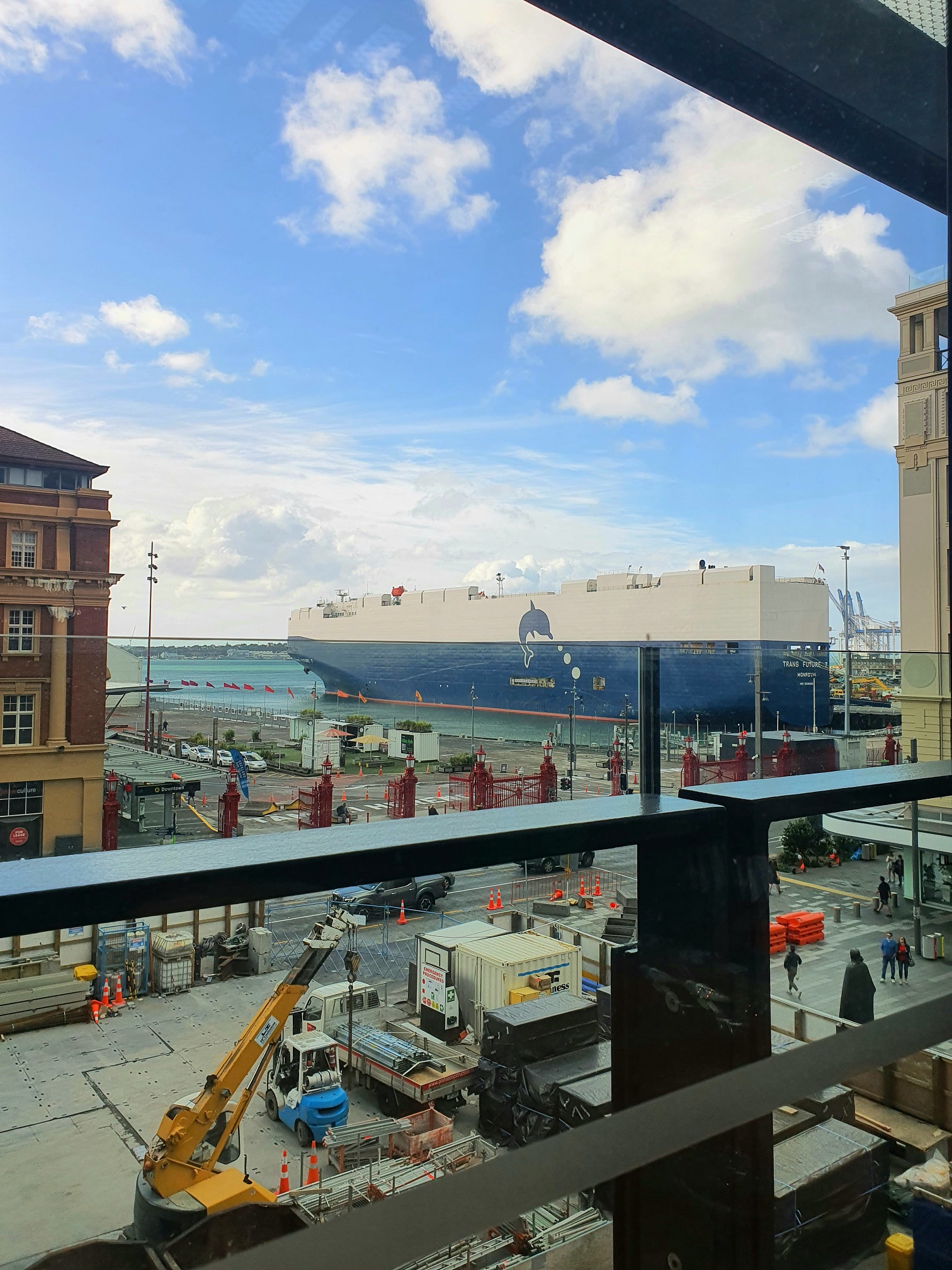 The bloke at the reception saw itemized evidence of my A.J Liebling-like feast (although I would have actually consumed less than a quarter of what A.J.L would scoff down) and remarked, “That’s a lot of food, you must have been hungry“ – which would be a compliment to the Man Vs Food Champion but a rude jibe to all others. It does not change the fact Ben Bayly’s cuisine soars at its best in Ahi – N.Z has good ingredients but Bayly is an even better master chef.