Only a Brahmin who has renounced his thread is a real Brahmin. This applies to both Bengaluru boyz and Boston brahmins. As for moi, prayers never behooved me (except in the time of exams- Sankata bandaga Venkataramana) and my rituals have largely been of the ungodly kind whilst I have religiously tried to destroy every tenet of Brahminical behaviour. But my adherence has been more exemplary vis-a-vis the latter two name-components of Brahmin's Coffee Bar. I adore the smell of coffee not just in the morning but also when deep in sleep at midnight, and I've had the privilege of tasting its various versions- the dynamite Bengaluru "lota",the American crude oil version served in searing-hot Starbucks cups tall enough to make their doses precipitate Boerhaave's syndrome, and gorgeously full-bodied NZ versions. As for Bars, from Devdas to Dev D. from highway Dhabas to waterfront nightclubs, I have responsibly drunk to the lees.

Thus having partaken of this triumvirate, I was surprised that a long-term often self-exiled resident of Bangalore like me, had never heard of this joint. Huh?! I am a distinguished visiting student at Vidhyarthi Bhavan, a better-late-than-never (BLTNR) at M.T.R , an annual pilgrim to Karnataka Bhel House at Chamrajpet so how come BCB gave me the slip? Hoping that this would rank as a delicious well-kept surprise, one fine day, I set-out to investigate the secret behind the enormous popularity of this triple-haloed joint which occupies Rank 2 out of nearly 1000 restaurants of B'lore on Tripadvisor. Having trawled through Bengaluru's devastated roads (you don't need old-world Athens or Hampi, just come to Bengaluru), I arrived in front of this "hotel" (Indian for "restaurant")

Let's get the disappointments out of the way first. For starters, there is no Bar. You have to get drunk on chicory. Or, It is totally up to you if you would like to stealthily fish out your cannister of whisky, tip its contents into the lota, and fix yourself a nice stiff dose of Irish Kaapi... (Just kidding ,folks! I never expected a booze-joint here)

You don't need a restaurant reviewer to tell you that a restaurant with a short menu has a better chance of success than one with a dozen different sections. Brahmin's Coffee Bar, learning from the economy of Brahmins down millennia, has a grand total of 4 items on their food menu. Idli and Vada are served with chutney, while sambhar has been excommunicated. Idli per se is pretty ordinary, and pressing it between your tongue and hard palate reveals no pedigreed flavour. The Chutney too doesn't dazzle, it is a standard-issue green concoction of restrained taste - the consistency, meant to nicely bathe the Idli ,is no feat of distinction, and the channa dal, coconut and coriander trio is given no great spin. But put these two -white rice cake and green chutney together - and you have a very harmonious marriage which ends with both partners eventually vanishing together, leaving the plate empty. The Vada is an excellent crisp-soft rendition of urad dal - it can be crunched, savoured and polished off on its own.

Both Khara Bath and Kesari Bath will snipe at your diet-watching plans, glistening as they are in slick cooking fats, but both are very well-behaved on your palate. The savoury former is a semolina smooth-talker –couscous slapped with a different passport and transformed into its unctuous best. Small cuts of capsicum, bits of urad dal and mustard seeds round out its gentle flavor that minimizes spiciness. Fragrance is the first calling card of the sweet Kesari Bath as you deposit it in your mouth – whispers of clove and elaichi may be sensed – while micro-bits of pineapple can also be discerned in its dulcet impact.

Coffee here is just about strong, but that’s it. In a city full of expert filter coffees it does not hold its own, and lacks that pinch of a little extra sugar that could counter the rather rough-edged flavor of bracing beans. While tasting it, I could visualize a cylindrical slightly splayed upswell of inadequately moulded coffee-force, rather than marvellous swirling arcs rounding out into cohesive magnificence.

This eatery (the owners also started the well-known SLV brand of stand-and-eat cafes in Bangalore) situated in an unremarkable suburb, came into existence in 1965 – back then it was one of the very first establishments – “Darshini”-style –in the city to make the chairs disappear, keep some high aluminium or granite-topped tables for placing plates, and to adopt the practice of making patrons serve themselves by picking up the ordered food item from the counter. And the place’s popularity has endured since then. We saw a Mercedes ML 250 SUV parked next to the restaurant – and took the liberty of guessing that it probably belonged to a patron who doesn’t mind snacking in humble environs.

Which brings us to the Ambience – You come here despite the ambience, not because of it. I and my dear friend Venkatesh reached here at 9-30 am on a weekday, so the crowds were relatively less but business was such that it would still would have heartened the pockets of less popular joints. Throngs of customers are seen before you glimpse the actual “hotel” which has an open front. The faded sign bearing the restaurant’s name is tucked into a right corner of the entrance. Floors are weathered granite, pillars and walls are painted green, while the cashier sits on the left side of the entrance and briskly works away with orders,receipts and cash transactions. You take your docket to the back where behind a busy counter, there are serial portraits of bulb-lighted and garlanded Gods, and behind this intermediate façade, there is the cramped kitchen. On one side of the café interior, you will find propped up plastic troughs with aluminum trays for relegating your spent plates. A man sits outside and dispenses free extra chutney to go with the restaurant’s offerings. On the other side of the restaurant’s perimeter there are some tables where you may rest your plates and cups whilst consuming. I and my friend estimated that this old-world way-side eatery’s earnings (with sizeable profit margins) for a single morning’s worth of trade would approximate Rs.20,000 , which is more than the monthly in-hand income of an average educated Bangalore youth.

End-note – The food does not disappoint, and to come here is to witness a Bangalore ”hotel” landmark, and also a business phenomenon. 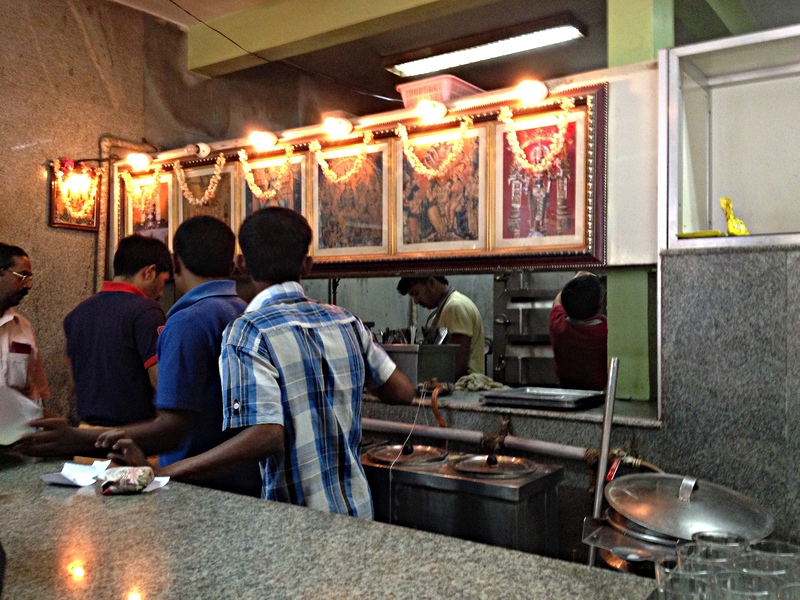 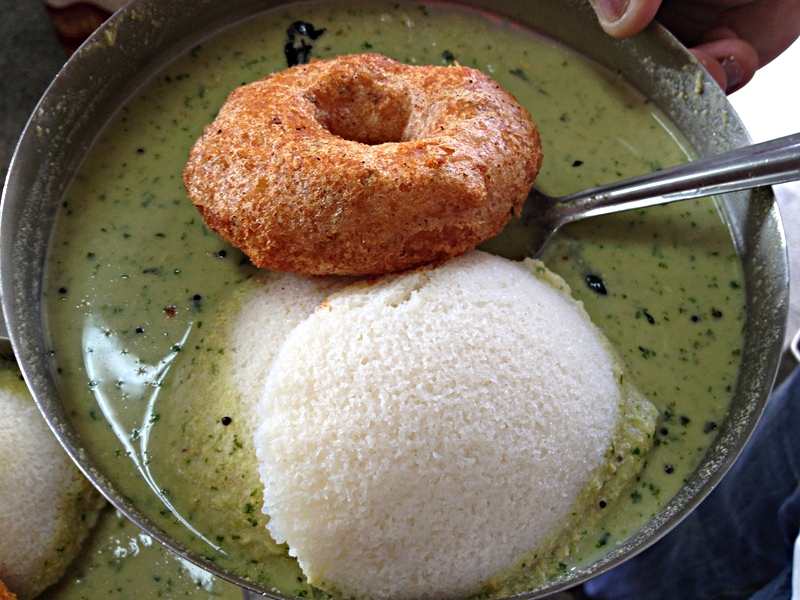 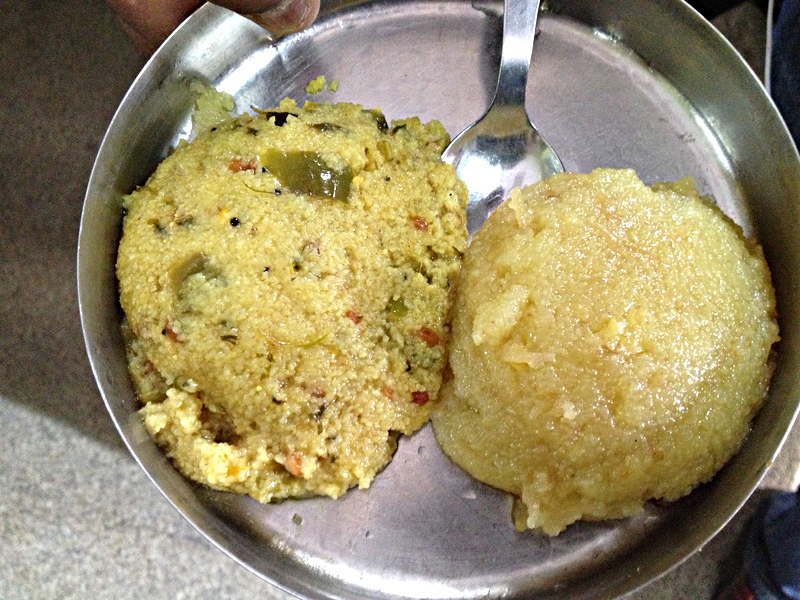 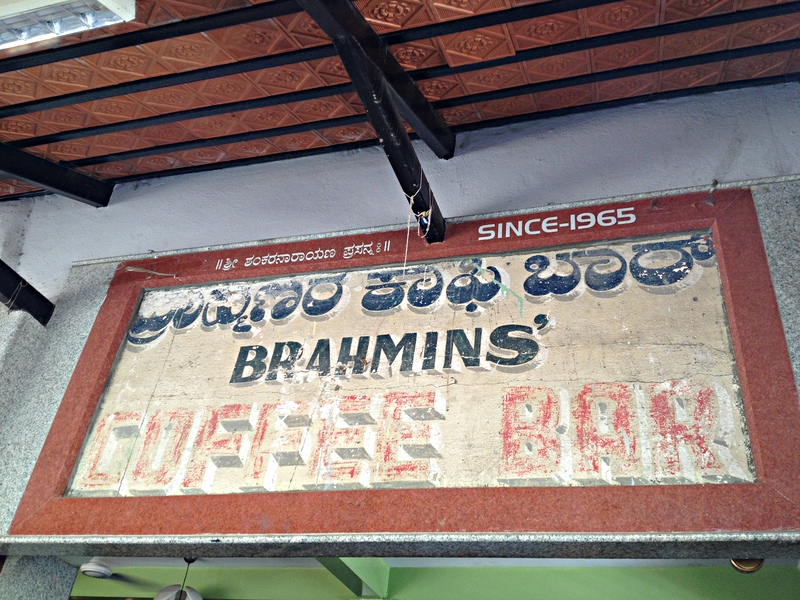 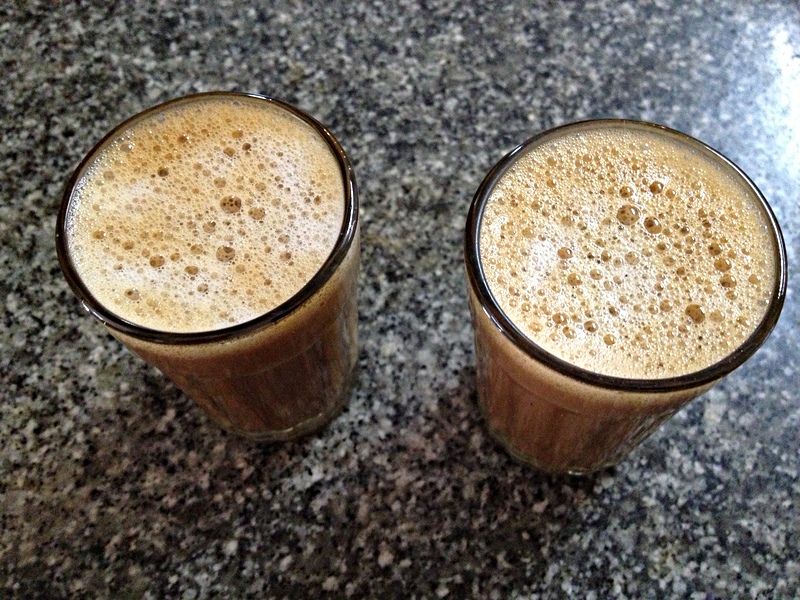