2.75 stars out of 5  (notable cuisine, but needs more organized service)

Attracting the entire town’s purveyors and the prime-minister himself, Siddharth Sahrawath’s Cassia arrives with the biggest splash for any Indian restaurant in Auckland. Vegetarians alas are again given the cold shoulder here (if you consider four vegetarian dishes against ten non-vegetarian ones) and so are most curries and the butter-chicken-tikka shebang, replaced and revised by a spin on nouvelle Indian cuisine that’s new to NZ but which has already taken hold in London, Delhi and Mumbai.

With 2014’s winter seguing into spring, I entered this instantly popular and packed restaurant which had newly opened and the first three dishes I tried were like the opening morning of a yesteryear Indian cricket team’s innings in chilly England or pacy Australia - the first three players were dismissed with little account within the first forty five minutes. The scallops with frills were only vaguely moreish, fennel brioche with caramelized chicken (fancy-pants name for chicken burger) had smooth chew but it was not dissimilar to a dozen others sampled in India, and the fish with chickpeas was overarchingly spicy. I now understand that the fat ripe-with-potential American scallops should not be expected to be found in NZ, the small scallops of which have limited flavour profile. ’Twas tough to be exclusively persuaded by the admittedly inveigling umami of that plate’s curry emulsion and foie gras quenelle, and the kitchen could certainly have done better than tucking mint raitha with tandoori chicken and the usual vegetal suspects of a burger into comely brioche buns. My perennial gripe that New Zealand’s elite chefs were not giving me a dish of unabashedly bold flavours, was dashed to pieces by a John Dory whose flavour was muzzled by a spice rub, and positively buried by its bed of chilli-laced garam masala. But the Indian cricket team teaches you patience if nothing else.

The next dish was like Sachin Tendulkar. Well, not quite…but ambition, versatility and chutzpah were all on display. A fried hunk of tasty duck was placed atop a fiery raw mango pickle-sauce (this particular pickle is a hot favourite especially in South India) but those spicy waves were tamed and made more harmonious when the duck was blended with it, and especially when a slice of lychee, a touch of kumara, a cut of almond (all neatly tucked into the sauce) got onto your fork. It was a true-blue chef’s conception alright, and it was to enjoy dishes like this that I came to Cassia. 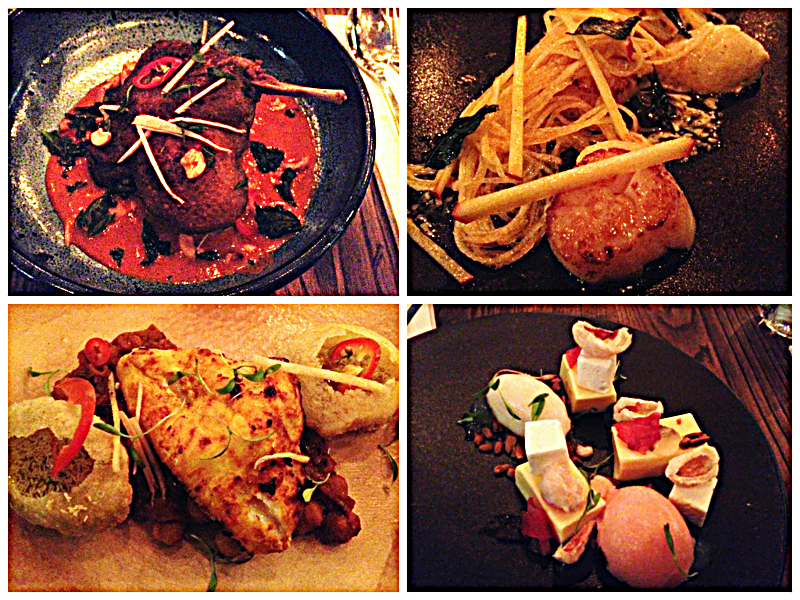 This bustling place was dominated by patrons of European extraction and I saw only a couple of Indians. Décor here is basement-industrial-casual-“chic” : the fact that the current set endorses it , doesn’t bode well for our future. The stone floor, muted lighting and the globe-like lamps on the ceiling all strongly recalled the Spartan aesthetic of Clooney restaurant two kilometres away, but with the dining area shrunk to half the size. Levi, a young man of French descent, who could just easily have come across as Indian, good-naturedly attended to my table - he’d diligently elicit feedback which he accepted even when I unflinchingly offered thorny facts, and sometimes he would not ask and instead clear the plate a bit more slowly, giving me space to volunteer feedback.

Considerations of riotous taste notwithstanding, Sahrawath re-imagines boldly here. Ragda Pattis of Mumbai can be a hell of a snack when smartly seasoned and well-roasted - in Cassia, the chickpea bed is retained but the potato cutlet atop is re-made marine. Pickled spicy gobbets of meat in jars are relished in small quantities as side-licks in Sahrawath’s ancestral state of Haryana and here those bites are audaciously amplified into an entire main course. But the tomato kasundi he uses lacks the delicious simple-complex impact of elite Italian tomato sauces. This red sauce was ill-suited to two different seafood preparations - succulent but insufficiently seasoned “Bengal” snapper, and also soft-shell crab the taste of which was lost in Indian-style cornflour batter. I’ve eaten multiple renditions of seafood in the chef's other restaurant and there too, knack with marine delights was in shortage.

Cassia's chef and proprietor Sid Sahrawath works on alternate days here while the rest of work-time sees him in his equally popular world-cuisine flagship “Sidart”.The pattern of hits and misses, and bustling ambience (neither place is suitable for a sane date) is evident in both restaurants. But Cassia’s potential is undeniable - fenugreek lamb was presented as soft, robustly flavored chops paired in inspired fashion with full-throttle chutney. The latter packed coconut, curry leaves, chilli and tang with superb balance, and marvellously evoked India’s finest spice mixes - this concoction should be tasted by the many Kiwi café proprietors who peddle innocuous preserves in the name of “chutney”. Sahrawath went on to give a fine example of transplanted cuisine with one of his vegetarian presentations, in which he hid a neatly roasted and slick aubergine under a blanket of smoky and satisfying spinach sauce - well-known in India as palak paneer - flecked with molten cheese and texturally perked up with crunchy kale and bean sprouts.

In desserts, an exquisite cardamom pannacotta was partnered with a stunning lychee sorbet ,and pleasantly feathered by a rose meringue. The casualty on that plate was that night’s watermelon sorbet which (I’ll be polite to Cassia) should never have been put on that dish. But passion fruit rice cream was unsuccessful - it is admittedly very difficult to cook this sweet rice pudding (Payasam or Kheer) in light and refreshing style.

The staff can sometimes can ask patrons at tables who are nearing the end of their meal, to shift to the bar to have dessert ,so as to seat the waiting customers. This is against the tenets of hospitality and on my second night, I was the recipient of this undesirable turn of events. Moments before, my regular waiter changed and a young lady from the staff came up and asked “Are you aware that this table is booked?” I’d been sitting there for one and a half hours having just finished my fourth savory course of the night and whichever way I look at that question, it remains as a stupid query to pose to your customer at such a juncture. When I paid the bill and left, and later had a quick look at it, I noticed that they hadn’t charged for the dessert. Regardless of whether it was an appeasement or a mistake on their part, I wasn’t anxious to return and clarify the matter because the tip I left had exceeded the deficit.

But such upsets need to be weighed against the charming service provided by such gents as Matthew, the maitre’d who I’ve seen in elegant performance elsewhere. He’d float in and out of the dining area while keeping an eye on the reception desk. Tall and lean with an icy cool grace and measured carriage which belied the simple attire of his black full-sleeve shirt, his occasionally swift step would smoothly cease and he’d gesture with subtle chivalry for a lady to pass first. At the desk at check-out on my first night here,, when a young lady of the staff requisitioned feedback (about the restaurant, not her) I was trying to express myself when I noticed a couple next to me waiting to pay the bill so I hurriedly concluded the affair and was about to half-rush out when Matthew, who’d quietly epiphanized behind me with my coat helpfully held wide open, issued a gentle verbal remainder. “Oh!” I stuttered further embarrassed by my forgetfulness. My cards ,the bill’s paper sheet and mobile were clutched in both my hands which had become too unwieldy to pass inside those sleeves so I fidgeted, and then ditching all savoir-faire tried to somehow pluck the coat away from his fingers so that it could be worn later, but Matthew, patiently without moving a muscle, waited while I took the hint, put the outcropping papers in my pocket, and slipped both hands into the openings as the jacket was eased onto my shoulders. You don’t meet many people, especially in busy informal restaurants, who are determined to be hospitable.