Finding a heavenly chick or sublime beef in NZ isn't very hard. All you have to do is to locate select places. But when it comes to top-grade sushi, the Japanese fiendishly devoted drive to finding that supreme wave of umami and softness, which has crossed continents to liberally splash over America, hasn't yet hit NZ shores. The reasons are not unreasonable- there aren't that many Japanese in NZ, and the number of patrons ,ethnicity notwithstanding, who'd be willing to shell out at least $100 per person for a flight of top-tier sushi, remains a debatable matter. When I received tidings that Cocoro was a moneyed establishment that served mean sushi, I was stoked. Would I finally find a exceedingly rare culinary experience of the said genre in this country?

Cocoro, ensconced in the suburbia of Ponsonby, a little removed from that area's commercial avenues, certainly offers food rare in Kiwiland. O-Toro (super-fatty tuna) is renowned for its silken fattiness and the impossible Japanese have haplessly fished it to near extinction. Most of the O-Toro caught off NZ waters is exported. I instantly ordered a piece of it upon noting its presence on the menu here. On arrival, it certainly had the expected looks - marbled,pink and glistening. 'Twas meltingly soft but I could hardly taste it thanks to interference by the little dab of pre-added wasabi (extra quantities of which were presented with a nicely authentic sharkskin paddle for grating it). The same followed for exotic varieties like "Kinmedai" (Alfonsino)- none of the sushi gave me peak pleasure. A large beautiful prawn on initial bite offered promise of lovely fresh flavour but the already inserted wasabi obscured that taste too. 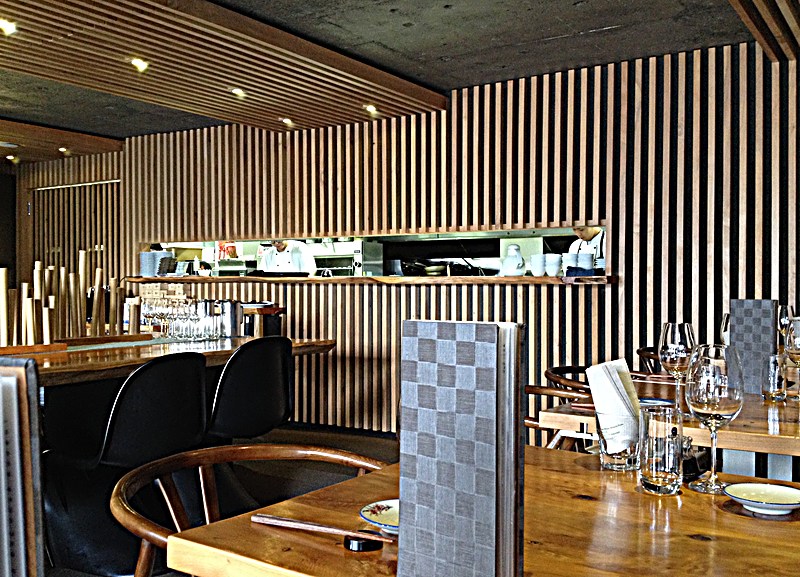 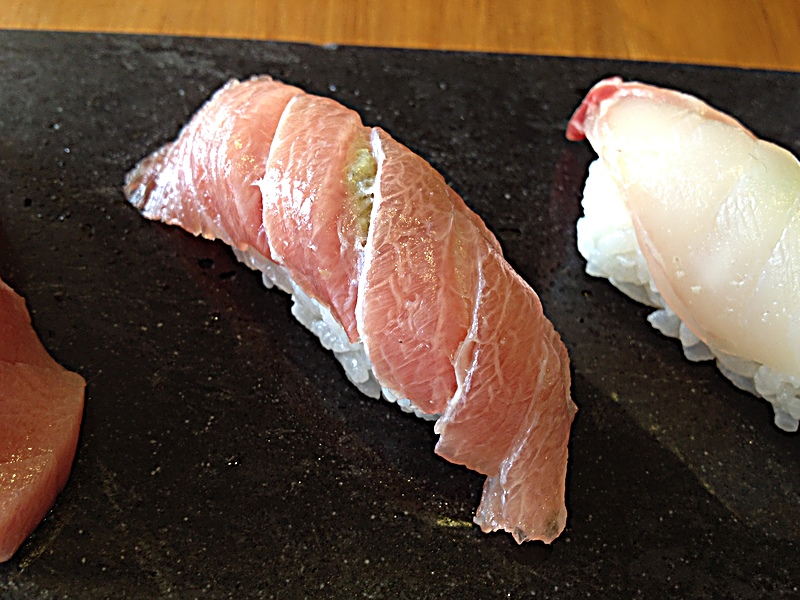 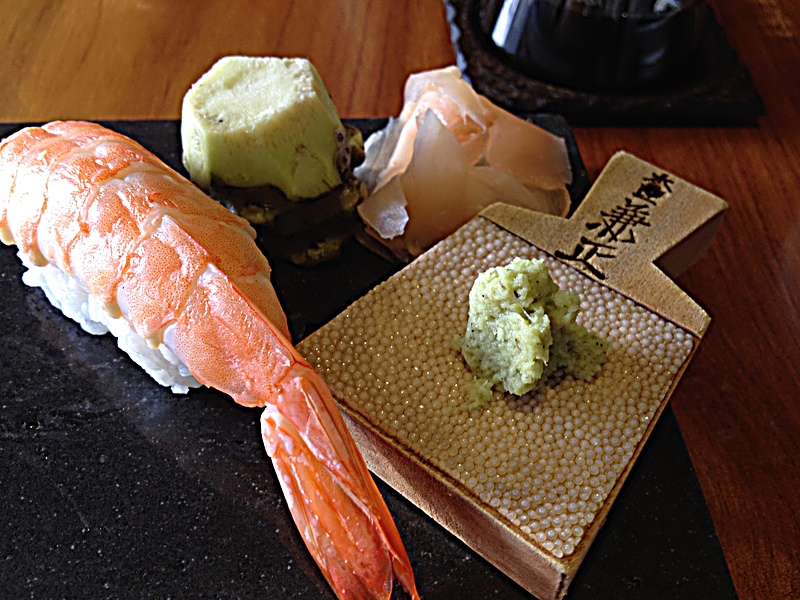 This brings us to the central problem with Cocoro - its technically accomplished visually impressive food speaks of above-average chefs but these gentlemen forget to ensure that intelligent calibration of taste which makes a restaurant truly special. Chicken Karaage would've been terrific tender-crisp morsels had they not been presented soaked in an ill-suited sweet-sour salsa and soy sauce. Prawns in filo pastry would have been an exemplary starter had not its coating been a little too large, thus dominating the delicate flavour of its core. 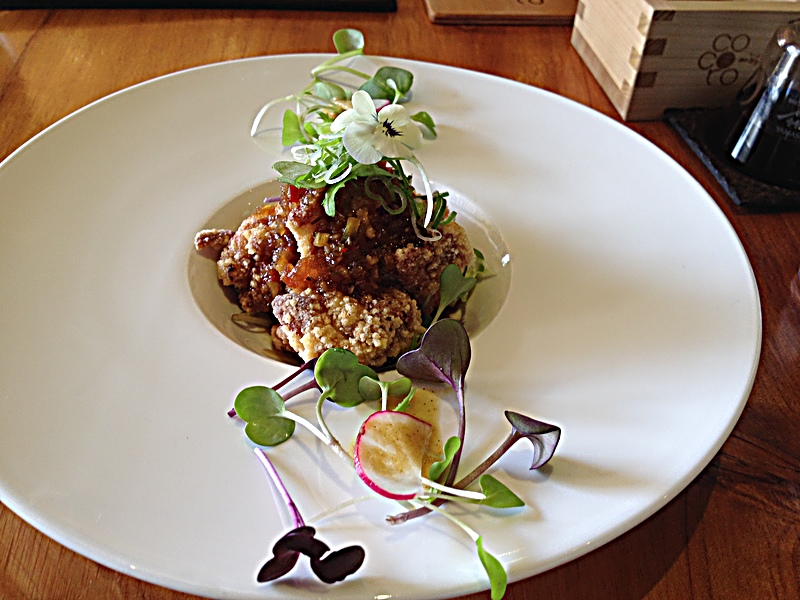 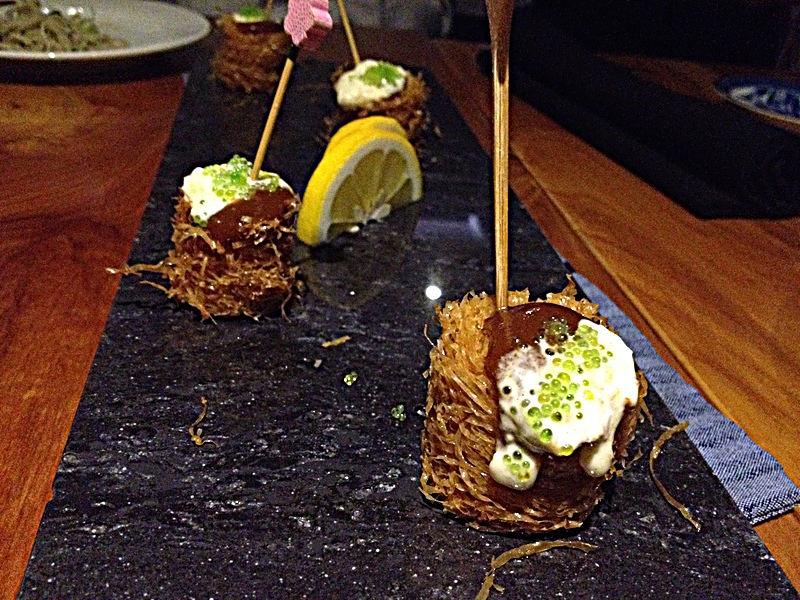 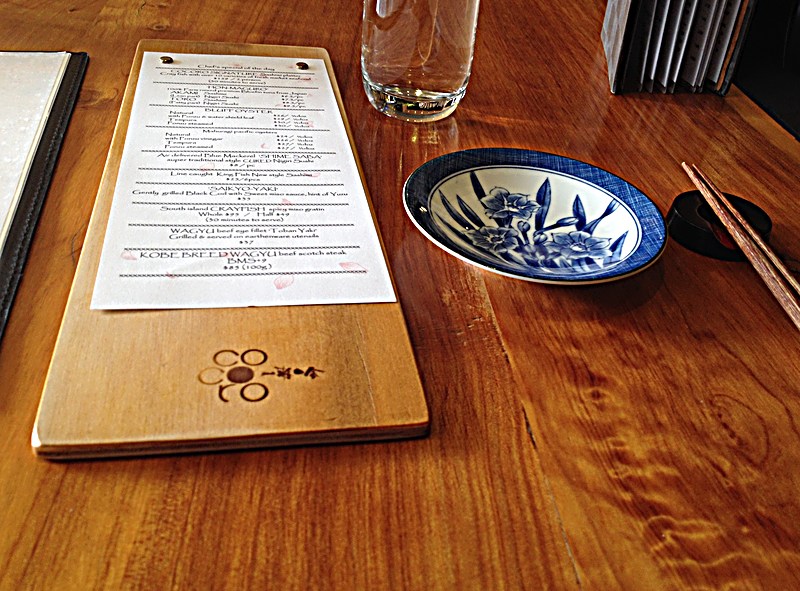 The ambience is casual-chic, neatly blending corporate style with bucolic touches. This elegant space is composed by tones of wood, black and gray that become more stylish by night. Service is average. Sometimes, when the mood strikes, they will ask you whether you liked the dish .A waitress was joking with a nearby customer that while it was a glorious sunny day outside, the day being a public holiday, it wasn't such a splendid proposition for her because "I am working!"- she said and laughed. Shouldn't you, especially to your clientele, give the impression that you are enjoying your work, even though you are not (jocosely or otherwise)? (I also hate it when one of my own coleagues says "Thank God, It's Friday!") On a second visit, the ceiling light cast its influence on me more like a strong interrogation lamp than a soft halo, but when this was brought to the attention of another waitress, she didn't seem too keen to alleviate my discomfort, and we were discouraged from trying to move the table a bit because it would go closer towards the entrance door. Why haven't these details been worked out before that door opened for the first customer?

Hokkaido Scallop with Whitebait Chawanmushi is amongst the prettiest,most elegant dishes you'll get in Auckland for $14. The custard is a creamy slice of sea, enhanced by the iodinic brine of Ikura Caviar while the scallop's flesh is like a melon of the ocean -not rapturous,not sweet - but just reasonable enough to resist provoking the critical monster in you.

Encouraged by Frank Bruni's glowing review of Matsugen NY's brave decision to offer the subtle charms of cold buckwheat noodles, this dish ($9) - "Chilled Zaru Soba noodles") was ordered by us in Cocoro. My pals ceased their partaking of it after the first few bites while my multiple tastings brought me no closer to espousing the putative wonders of its whispering buckwheat flavour. Pork belly arrived blanketed in a pretty quilt of refreshing vegetal players,but it missed that slick smooth mouthfeel and the fiber of its meat was a little too evident. 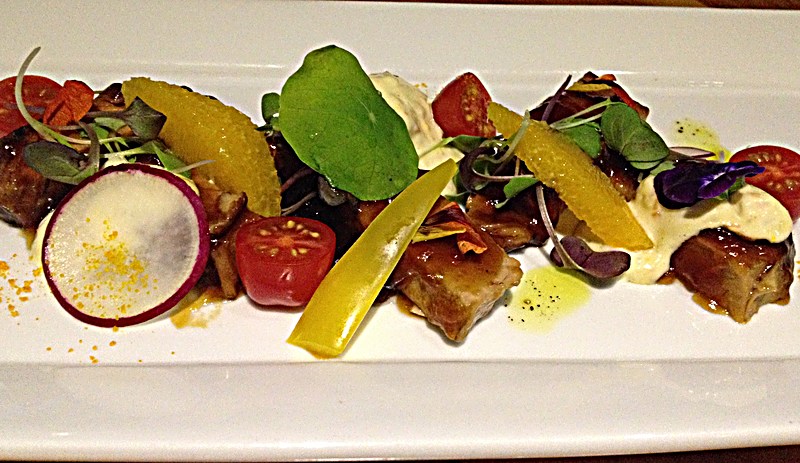 The $ 49 Crayfish spicy miso gratin is a luxurious crunchy treat of buttery succulent shellfish but it is not large enough (it looks generous but a lot of that base is shell) to fully justify the price tag. But yes its flavour is heady, complemented by balancing counterpoints of greens and citrus. The legendary Sukiyabashi Jiro in Tokyo gets his staff to massage octopus for 45 minutes to get it to the desired texture. But I doubt Cocoro would have gone to such lengths - the octopus here is a slightly chewy specimen of phantom taste. 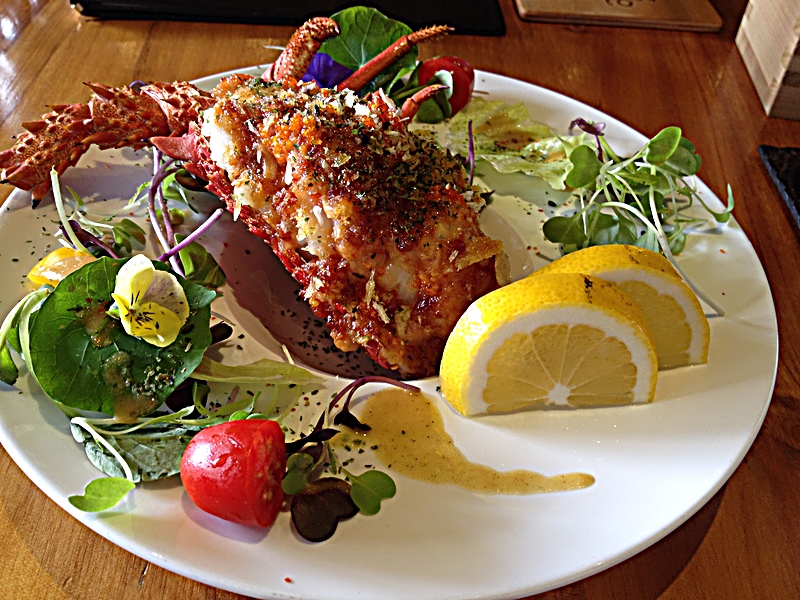 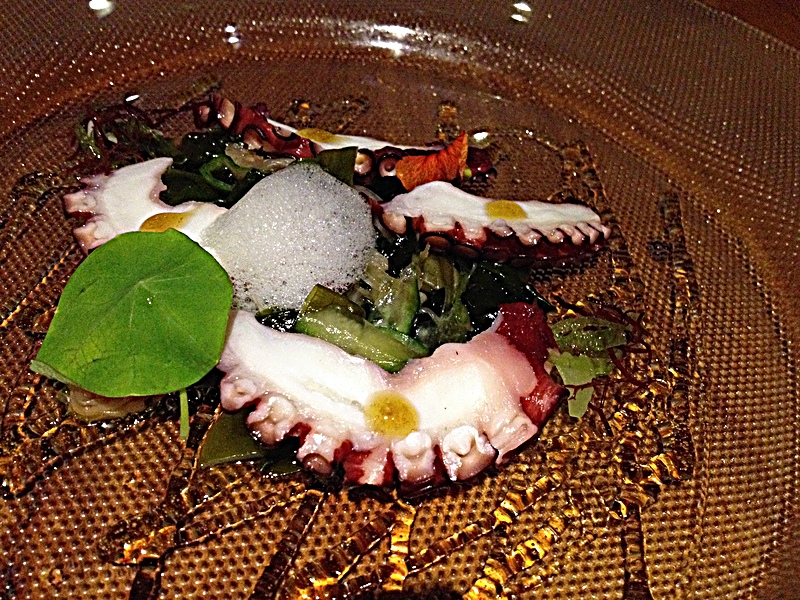 This no doubt reads like a lengthy list of complaints. Thankfully, our concluding dish in Cocoro orchestrated some much needed pure gratification. "Antarctic Toothfish" rewarded every dollar and even more of its $37 charge. Profoundly buttery, rich and redolent of the haunting soft flavour of marine depths, this was a fish that floored us all. If your partner doesn't mind dishes of moderate portions, likes style and doesn't insist on repeatedly getting flavour orgasms, you may bring that person here. 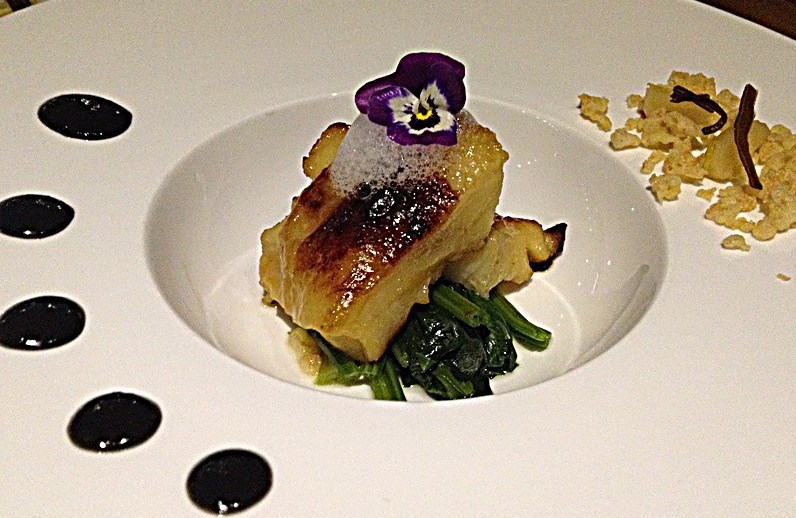 Enroute to Cocoro via K Road 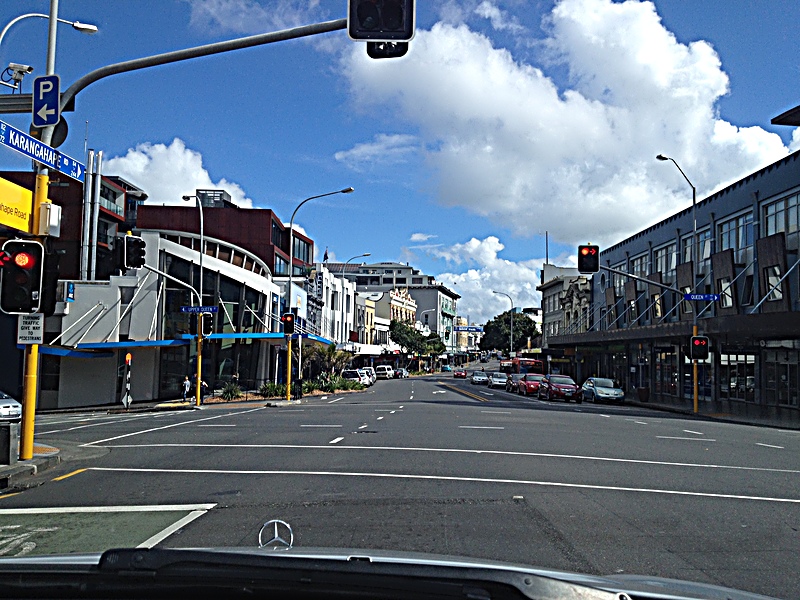 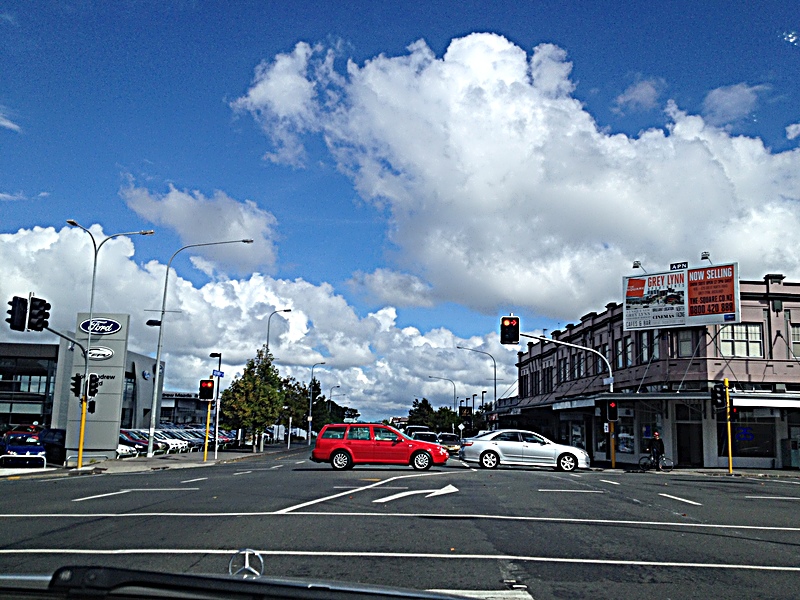 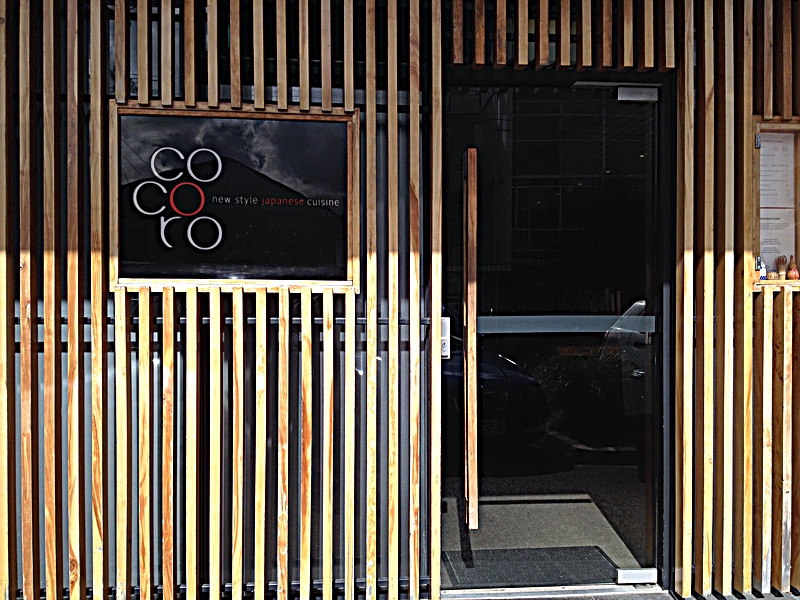