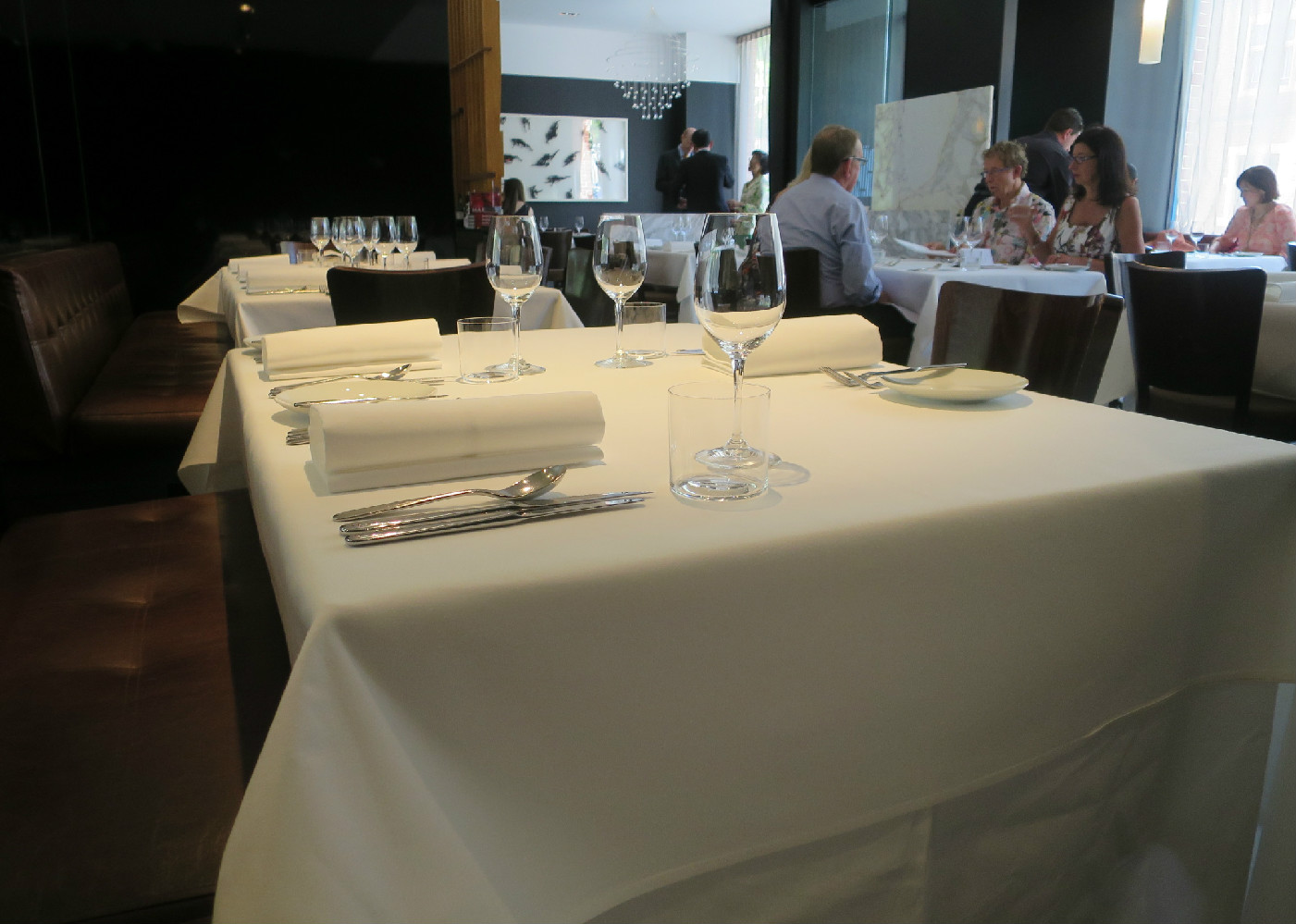 One of the inherent disadvantages encountered by Australian and NZ chefs is that they don’t have ready access to get trained in elite international restaurant kitchens. A chef here might be prodigiously talented but the lack of steady soaking in the culture and ethos of old-world culinary altars subtracts something vital from their professional soul.  Europe floats far away and so does the plethora of America. Many of the patrons in the region too do not get demanding as they have not been exposed to higher performance. Mark Best was likely acting on a similar train of thoughts when he took the plane to France to do stages in kitchens such as L’Arpege. That experience would no doubt have contributed to the design of a dish like Spanner Crab topped with almond gazpacho and almond jelly - the first course of an 8 course tasting menu in Marque - voted Australia’s best restaurant by Elite Traveller, with other respected publications bestowing similar honours. 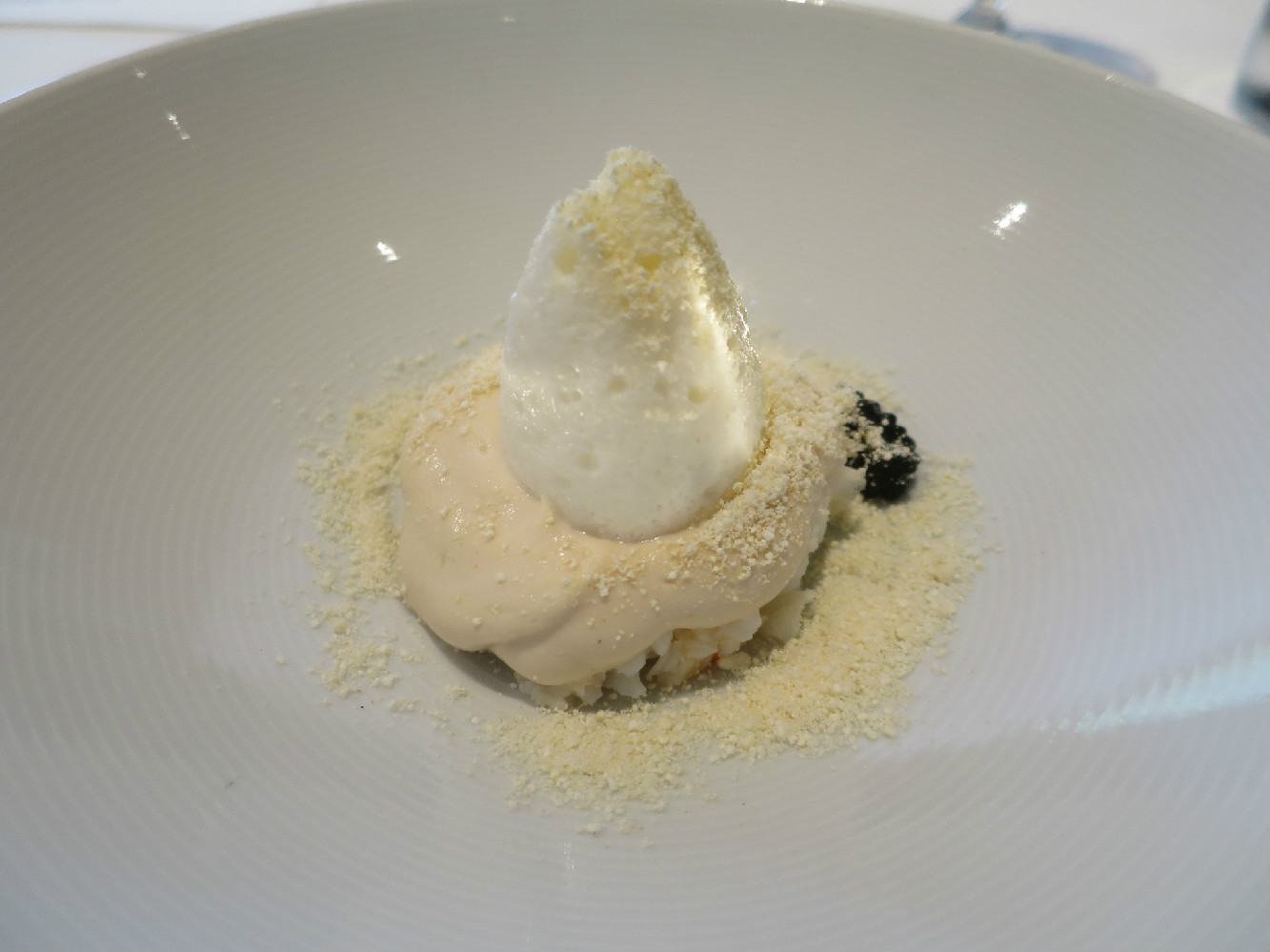 So this composition was a chef’s dish alright - technique, luxury and modernism had been blended into the definition of haute nouvelle cuisine. But let’s get down to the proof of the savory pudding. I sampled the crab, and admired the technique in making gazpacho and jelly from the same element - overall, a seafood bisque turned glam but the strands of crab did not sing nor did a lush heady opera issue from the sauce. This show-opening appetizer had everything going for it, except for that crucial two notches higher on the flavour scale. 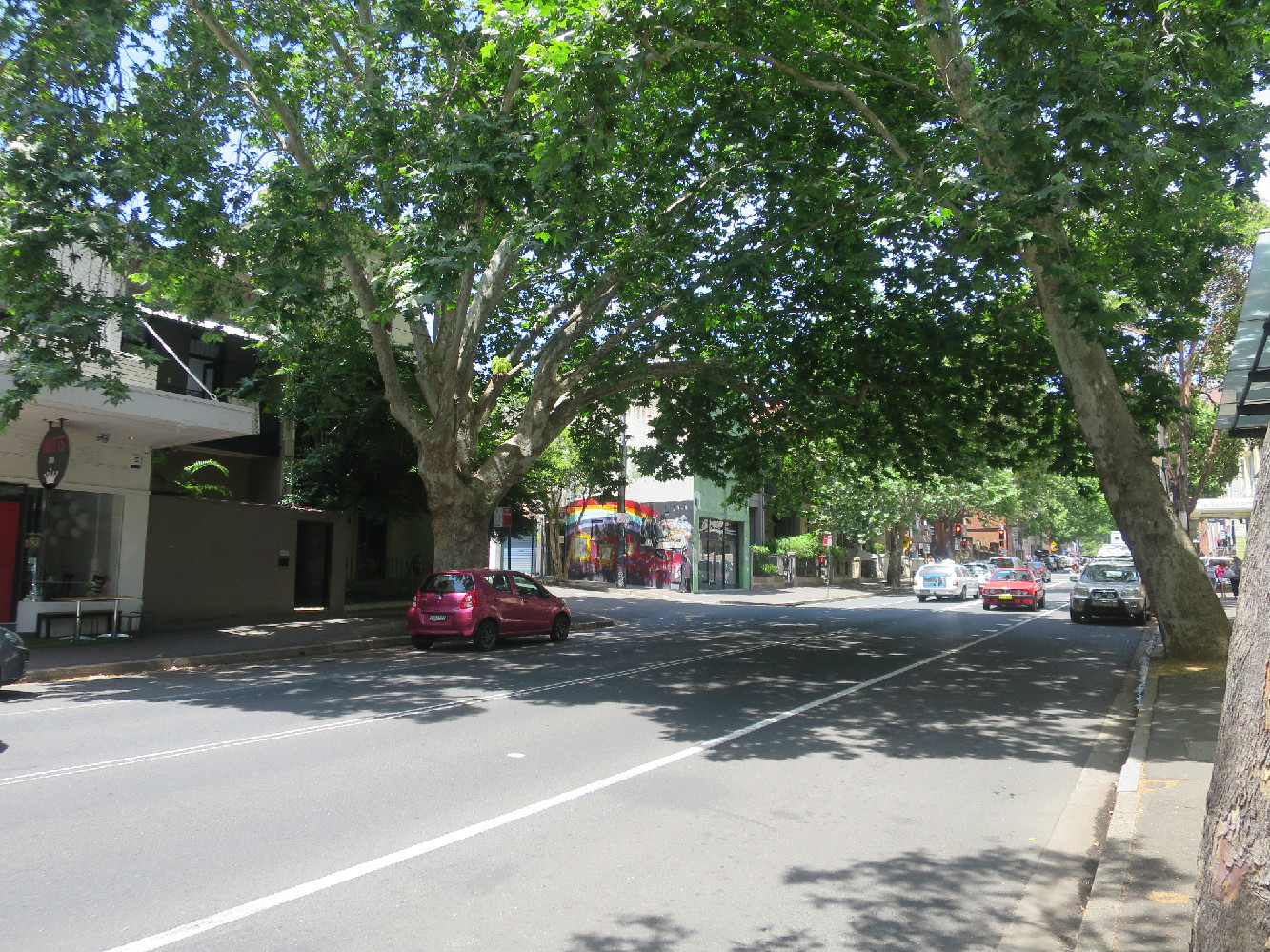 Passing through Crowne Street, near Sydney downtown where Marque is situated, I was struck singularly by how similar it looked to certain suburban roads of Bangalore before the latter city went to the dogs. The restaurant’s interior is standard-issue fine-dining without much frills or pomp - observers rightly point out that the focus falls squarely on the food (comely co-diners notwithstanding). The service staff - from the maitre’d to the servers - unfortunately, seem to have to have taken a cue from this unadorned ethos and barely sport any memorable personality. They go about their jobs well no doubt, but are in no danger of winning any awards. A waiter poured a different wine into a glass drained of another, instead of selecting a new glass, while a pleasant young lady simply wouldn’t come near my table on noting my beckoning nods- she’d smile at me and walk on. In a nightclub, I’d take the hint and follow her, but here she should have understood that I was only having the needs of a normal well-behaved restaurant patron. 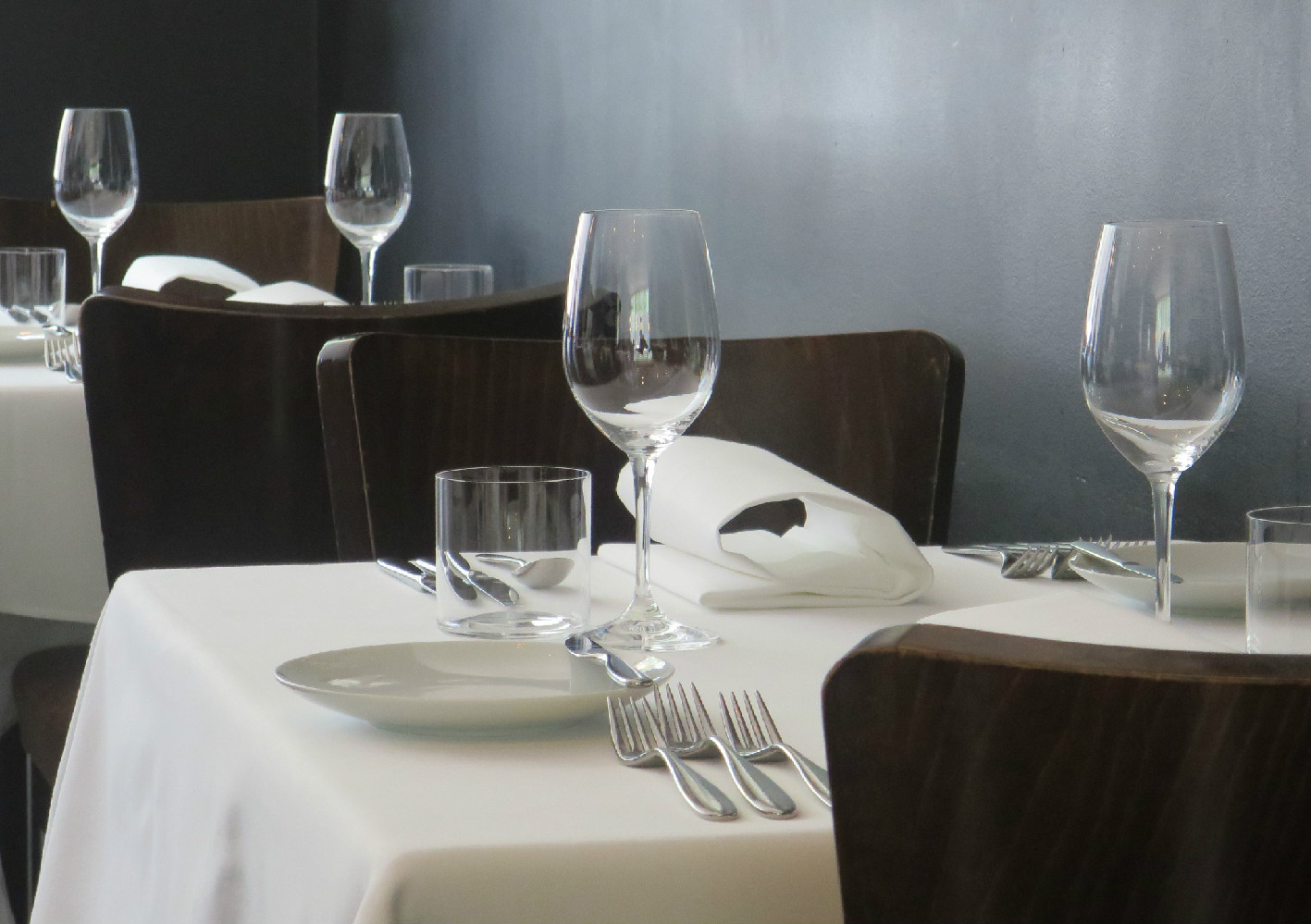 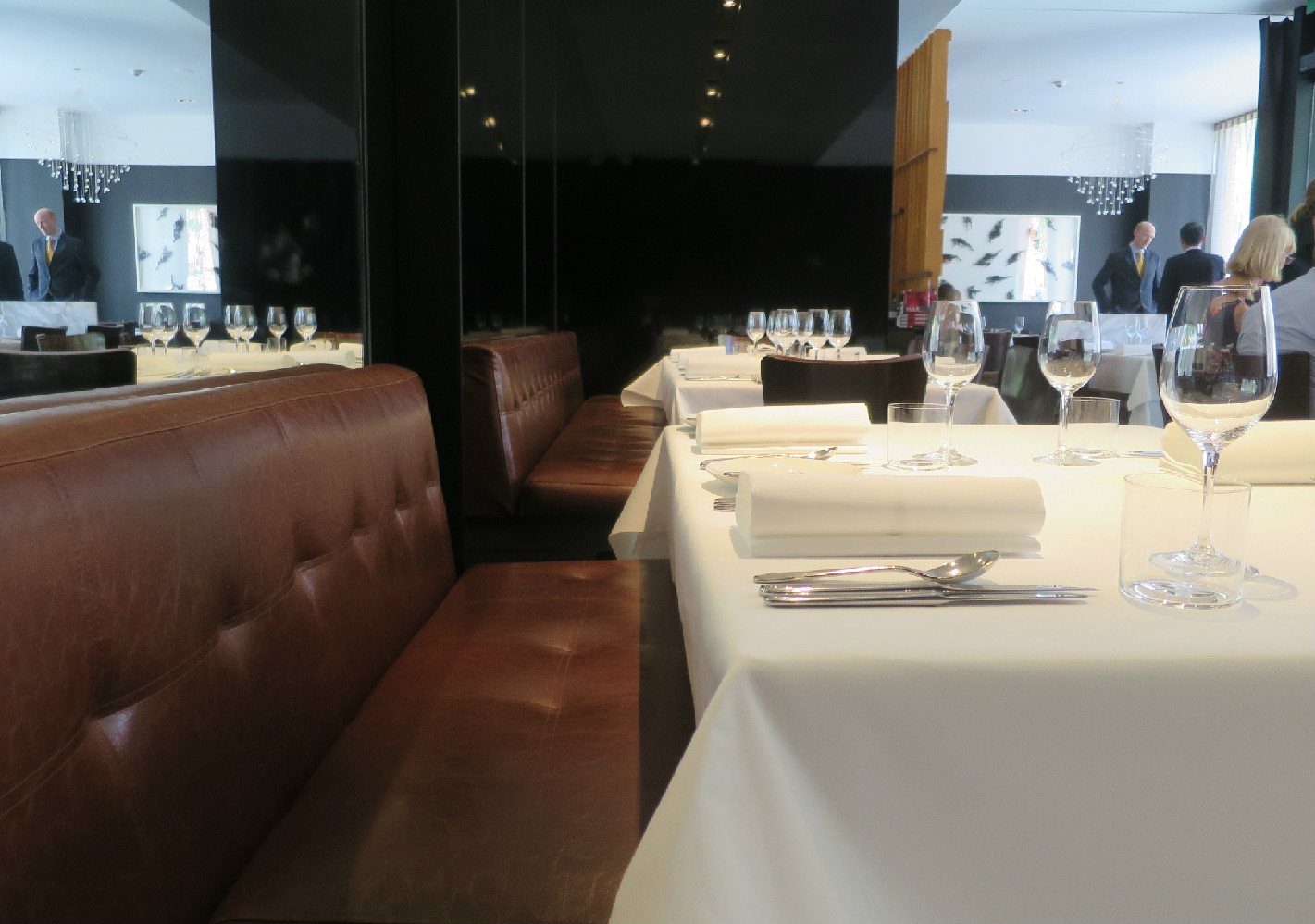 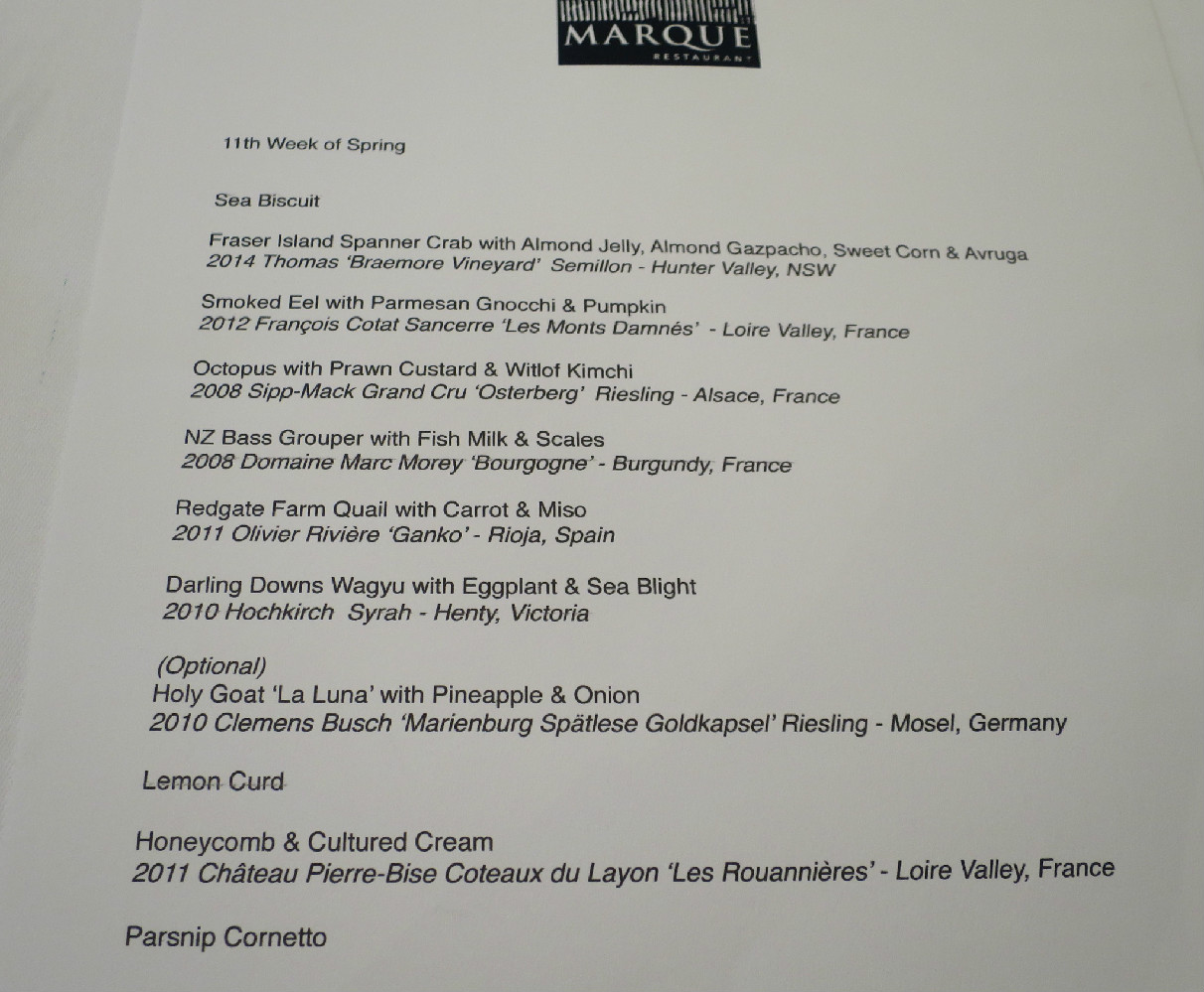 Monsieur Mark (who was away in Tasmania that day, I was told) then planned an elegant deconstruction : pumpkin consomme (pleasant but not soul-rocking) provided the shallows for both jellied parmesan  masquerading as gnocchi, and thin strips of well-smoked eel. I was thinking of the template for this dish’s inspiration but then gave up on it as I was highly unlikely to fondly remember this composition a week later. But Chef Best eventually lived up to his name with his third seafood rendition - the surprising and lovely heft of flavour that fresh prawns can sport (one of the most difficult flavours to capture amongst all the meats) had been captured in a slick custard, pooled next to a thick cut of octopus fried with chilli -  a subcontinental touch. That cylindrical chunk of tentacle was also the best version (in my limited octopus-eating career) I’d sampled, with a texture betwixt fish and shellfish. 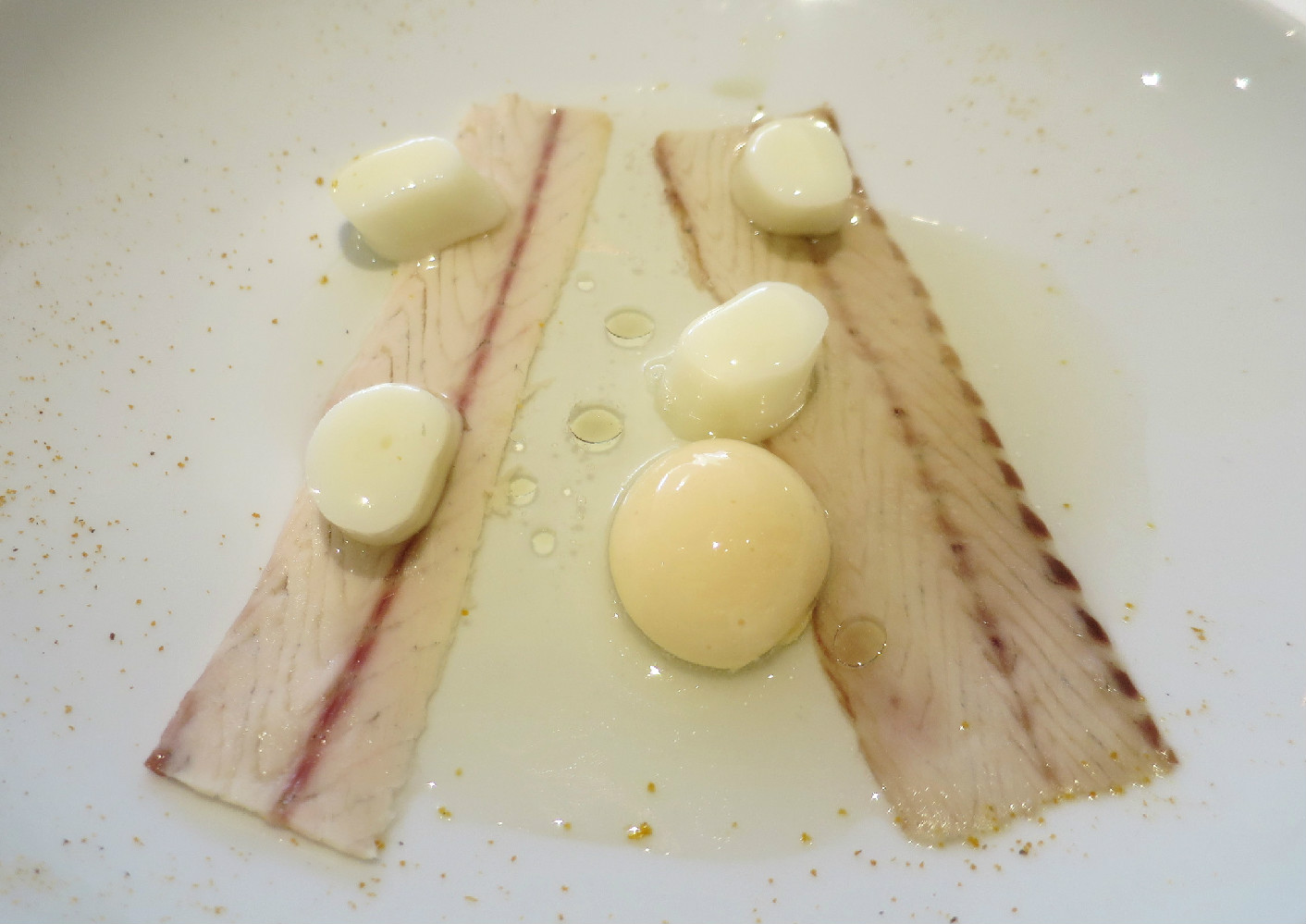 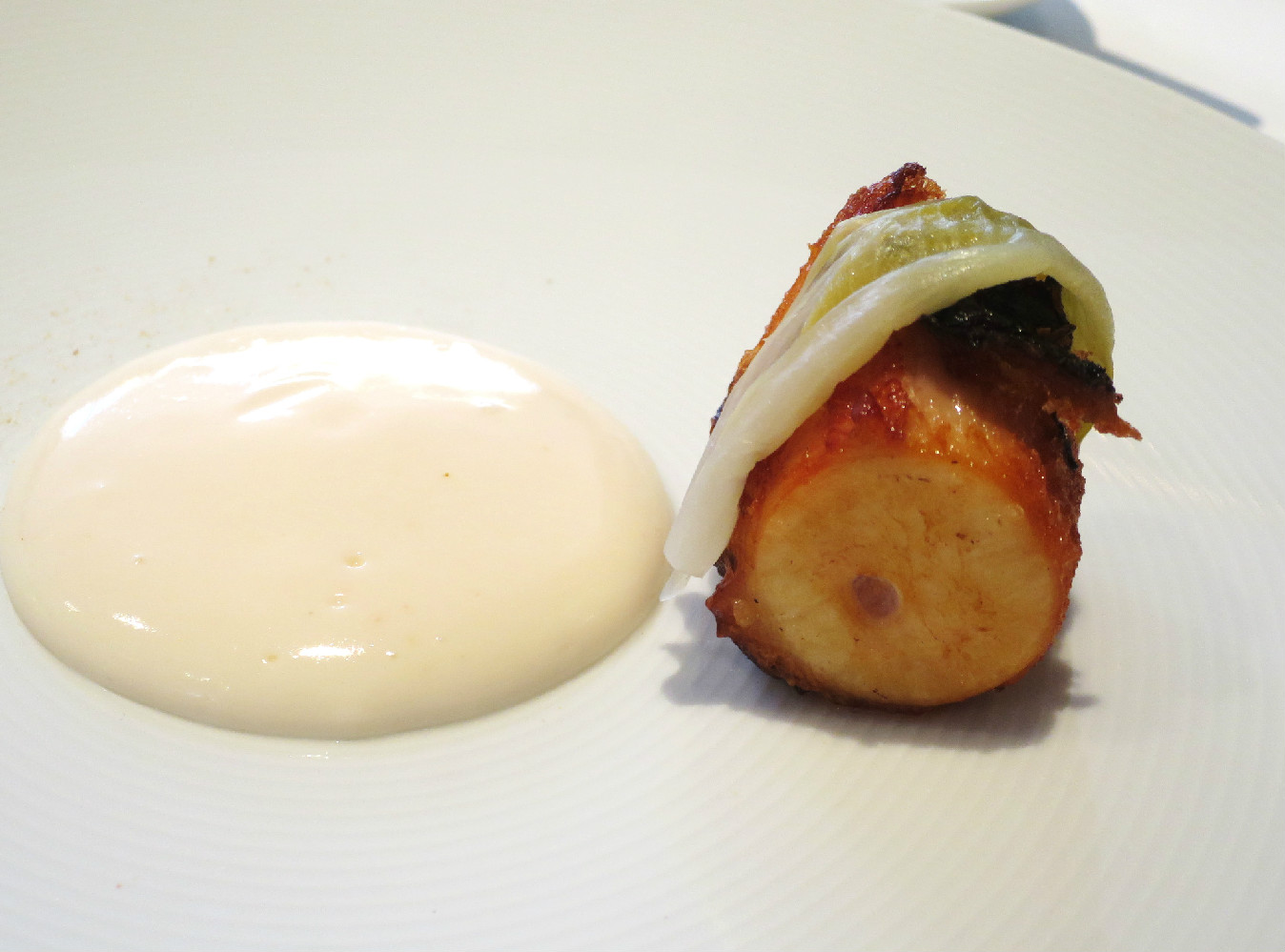 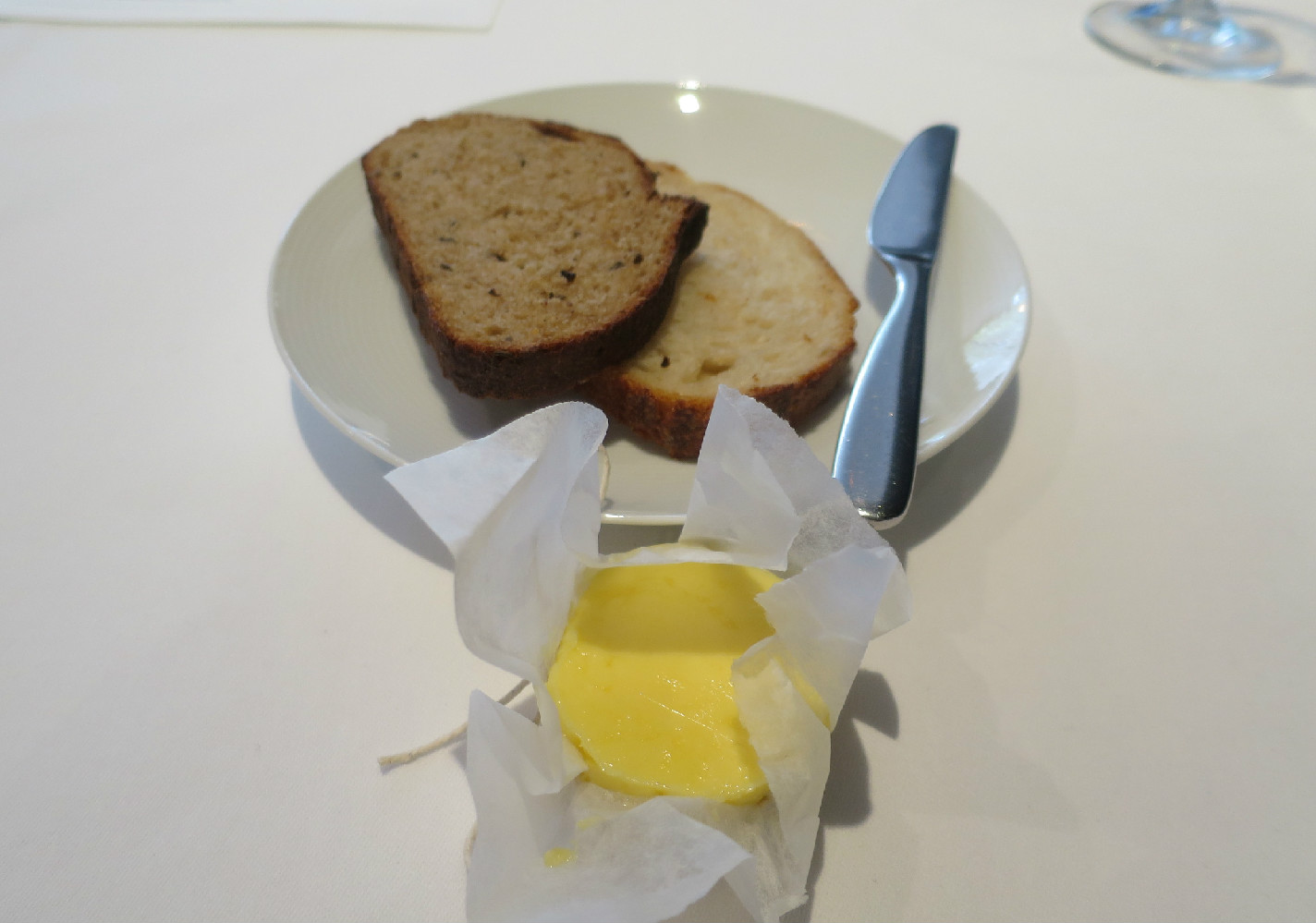 Amongst many of those who relish fish, I’ve seen a tendency of theirs to go for smaller more intensely flavored fish like sardines and compact mackerel, rather than bigger ones like kingfish. If the fish per se goes short on piscine pizazz, then spiced ( as distinct from “spicy”) chutzpah riding on a crisp crust often atones. My central problem with Marque’s fourth and final “surf” spin was not the “Scales”  (an interesting technique of thin-slicing scallops and dehydrating them- but they were not half as good as a “regular” great crust), not the “fish milk” (a neat idea of piscine currents channeled into cream) but with the NZ bass grouper. Journeying from NZ to here had still made me retain my essence but this was not the case with the soft silken fish which alas had little intrinsic taste (I repeat that I’m not referring to the seasoning or spicing here). A fish fillet, however soft it might be, which has little taste, is like being allowed to touch a lissome lass with your hands but with nothing else.

This account of my meal at Marque looks like a long litany of complaints ,but I only report what I felt. I want constant joy, but the universe for some reason often conspires to rob me of it. 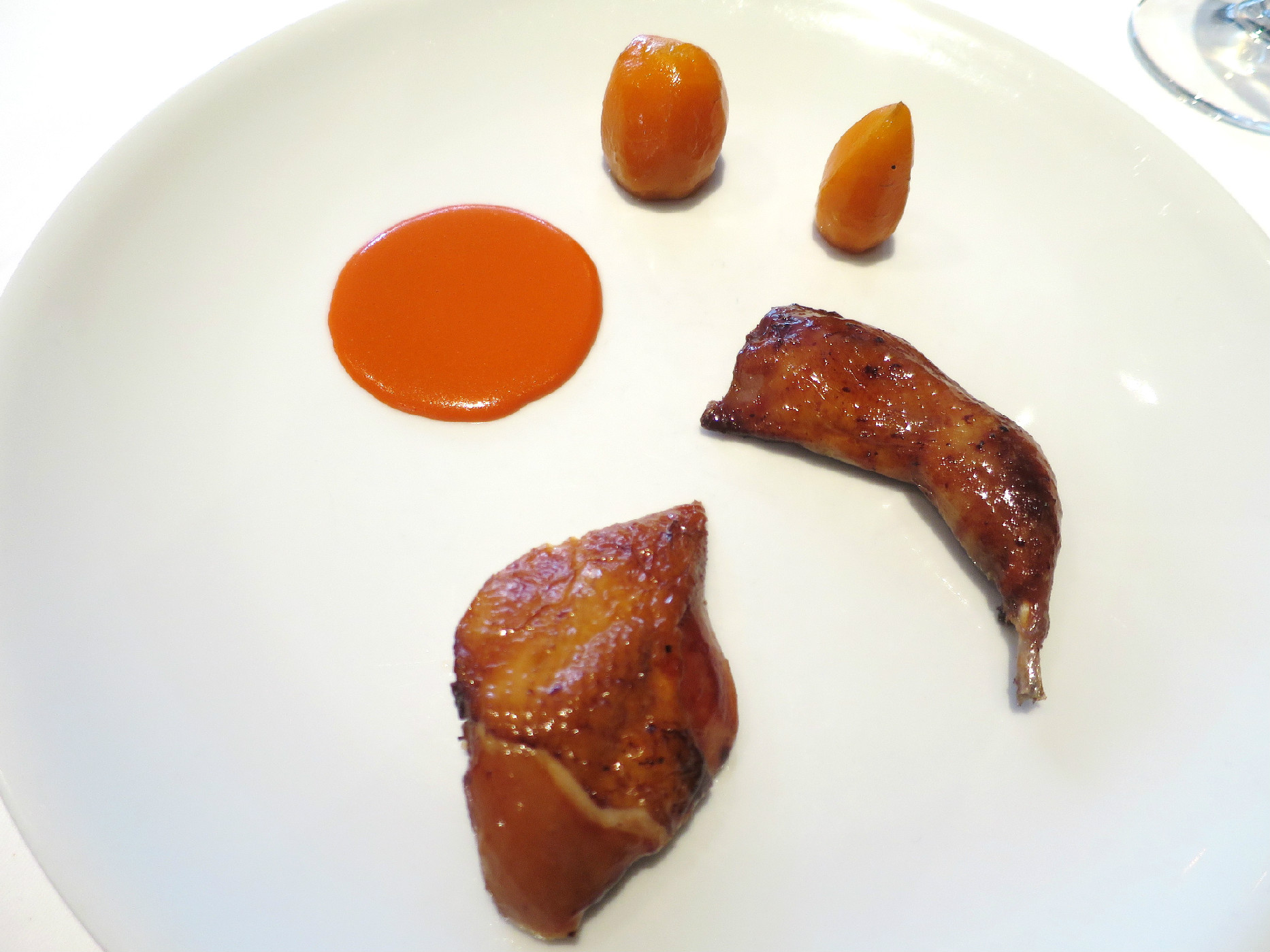 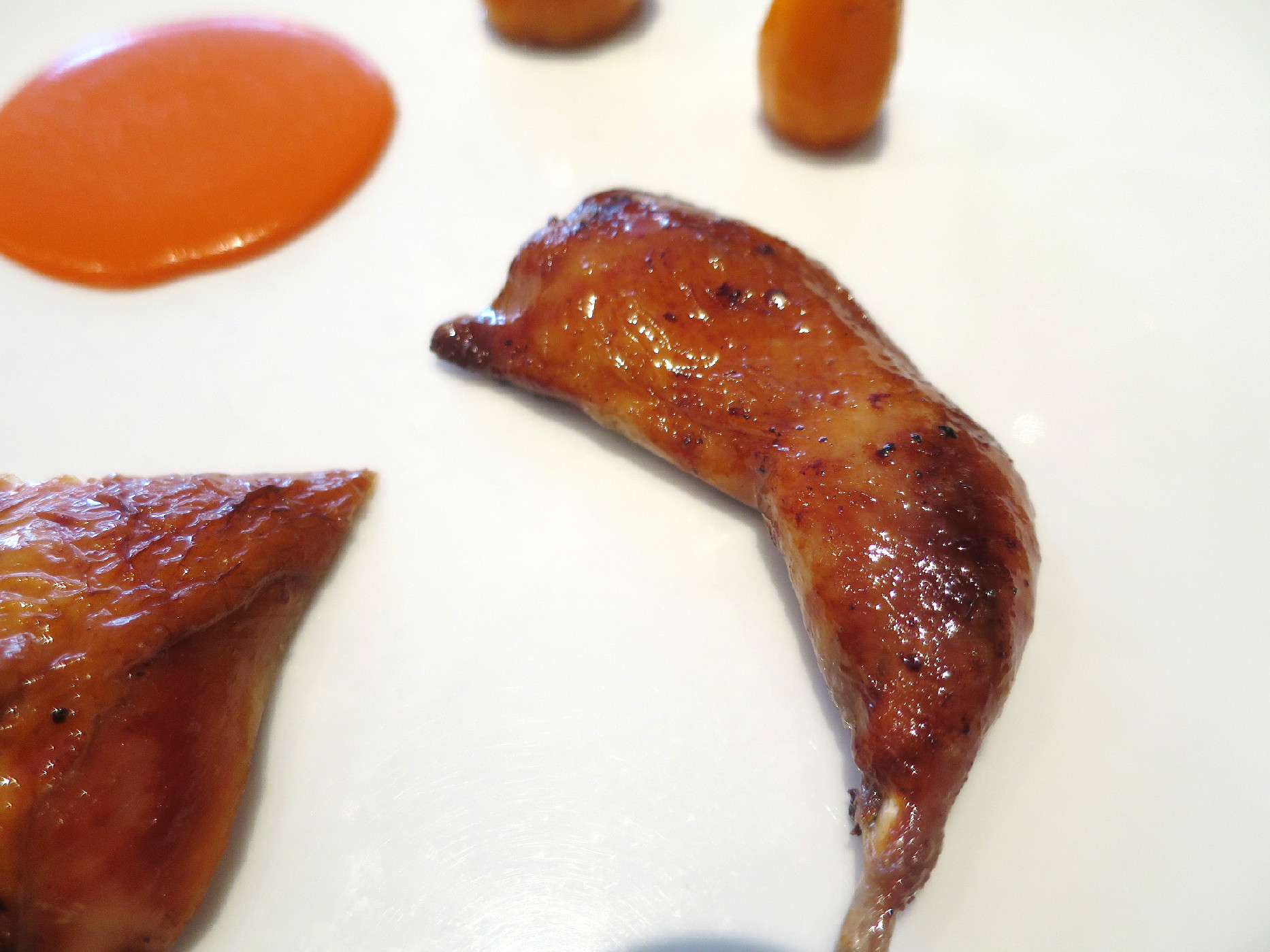 When the above dish was put down in front of me . one look at its slick orange Zen had me dreaming about ineffable quail, inveigling miso, and carrot that was a scion of blessed terroir. However, as I mentioned above, the universe (and some earthly elements) intervened. The quail breast taxed the knife more than it should, its leg didn’t nuzzle either, the miso missed brio, and the carrot , again, made me sigh that extraordinary vegetables have eluded me during this tour of Australian fine-dining destinations.

If you’re of the sort who dislikes fine-dining for being stuffy and formal, you need not despair of coming to Marque. In front of me sat a man in a T-shirt, quaffing beer from a shapely glass. Later a lad who might not even have breached his twenties, came in with his partner , clad in jeans and sneakers. Next to me a Chinese woman was chattering away to her mostly silent companions, and the sound level in Marque, with about 13 to 14 tables, all occupied, ratcheted up to that of a buzzing trattoria. 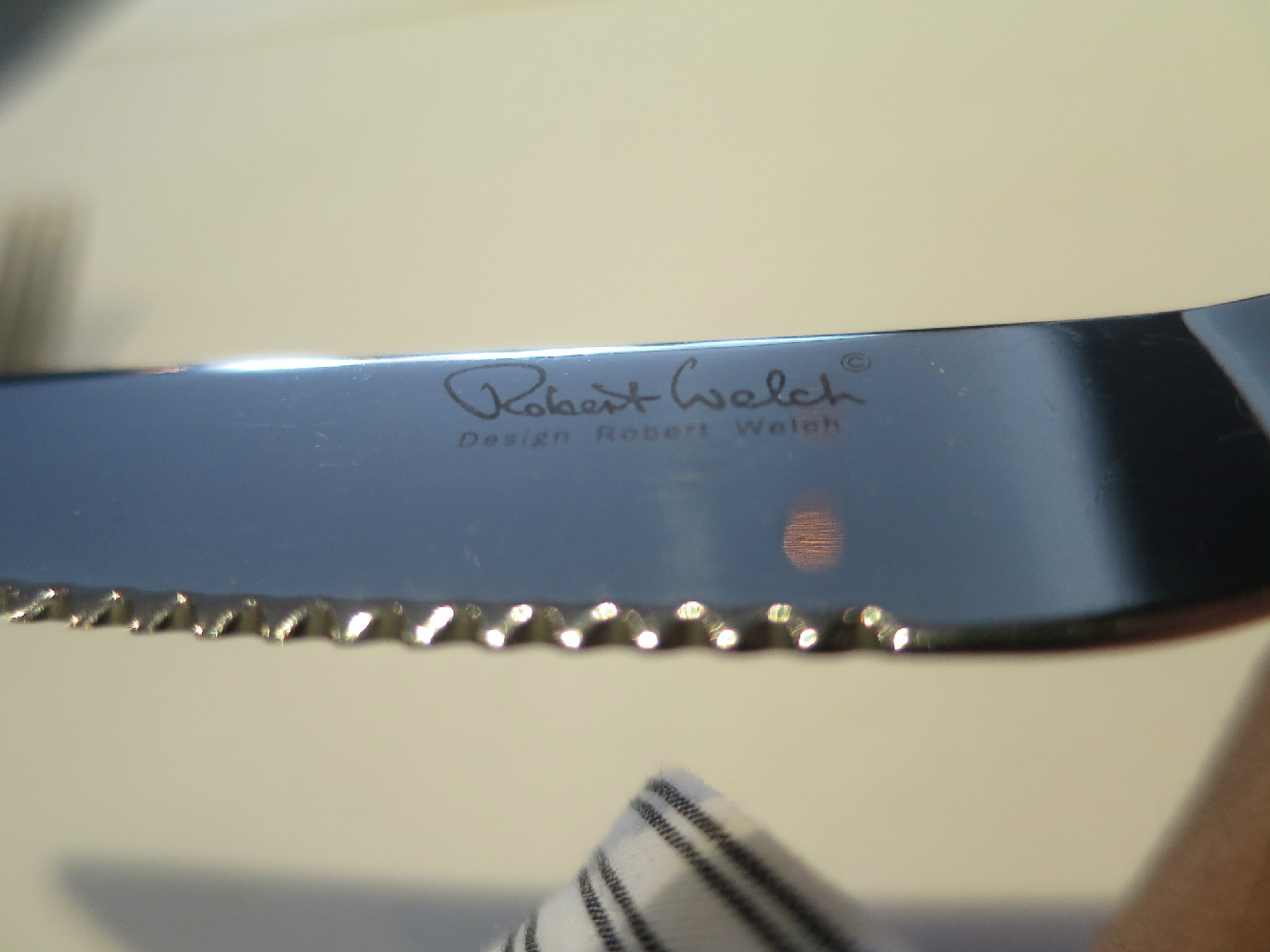 Ribbons of Wagyu finally mollified me - rendered fat made even those thin sheets of meat thick with rich roasted flavour, while a brinjal sauce’s smoky tang replaced and superseded a BBQ sauce. Holy Goat “La Luna” Cheese  was labelled as optional on the menu - though I don’t like goat’s cheese I requested this course in order to see if the kitchen could reverse my dislike. I did not know that it was an extra $14 (a fact revealed only in the final bill) anyway the cheese sported a nice fluffy texture but lacked distinction both in taste and in contrasting it with accoutrements. My disappointment was expertly cut down by “Lemon Curd” : a bracing triumph of citrus, cream and sweetness with pearls of tart finger-lime lending further “pop” - it was to taste and enjoy direct out-of-the-park hits like this that I had come to Marque. 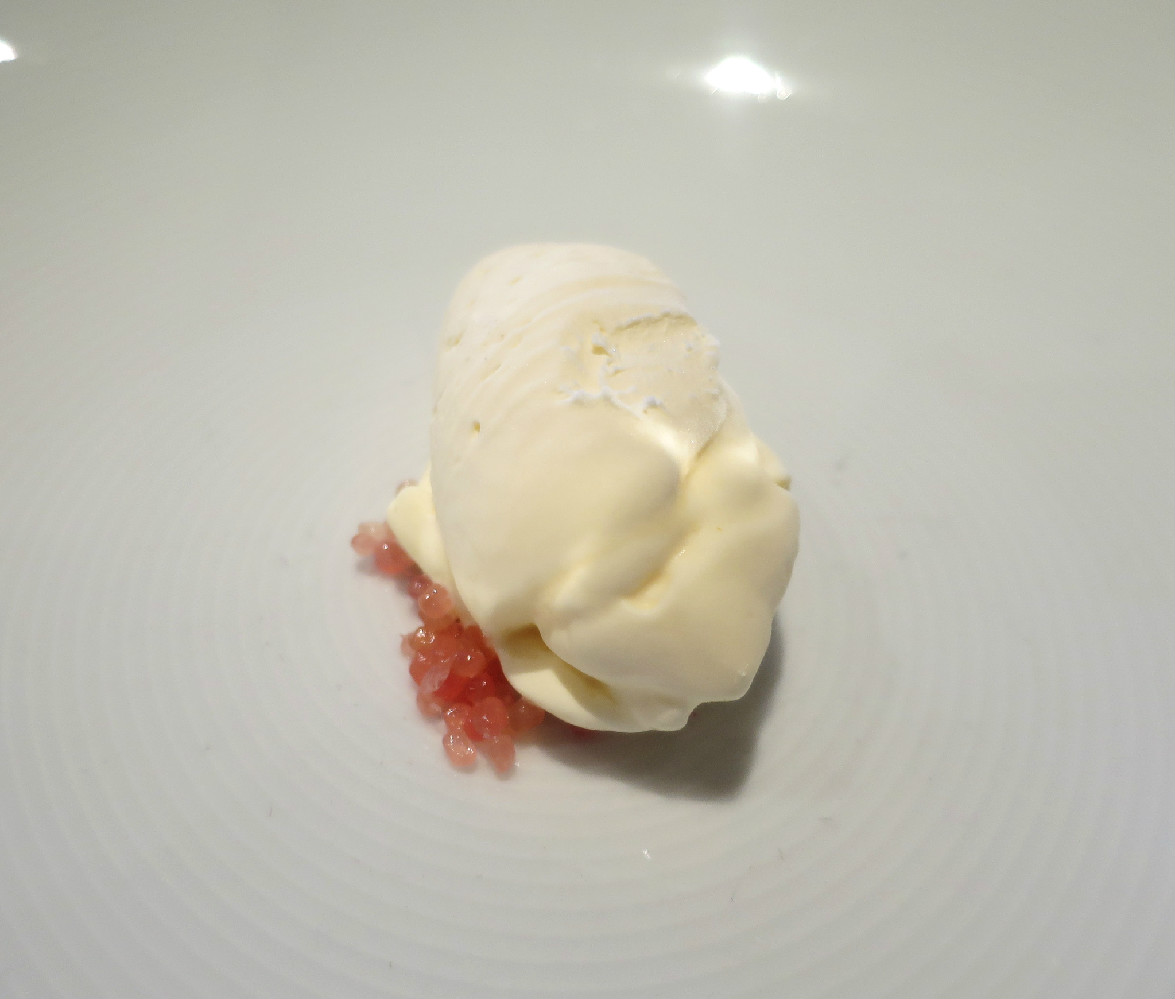 Intriguing technique followed with “Honeycomb with cultured cream”. To sugar syrup and honey, soda bicarbonate had been added to create the bubbled out pockets that simulate a honey-comb. I congratulate Best et Team for this creative stunt, but still posit that it lacked the all-round punch of its predecessor. Yes it’s nitpicking, but you don’t use usual yardsticks with purportedly top establishments. 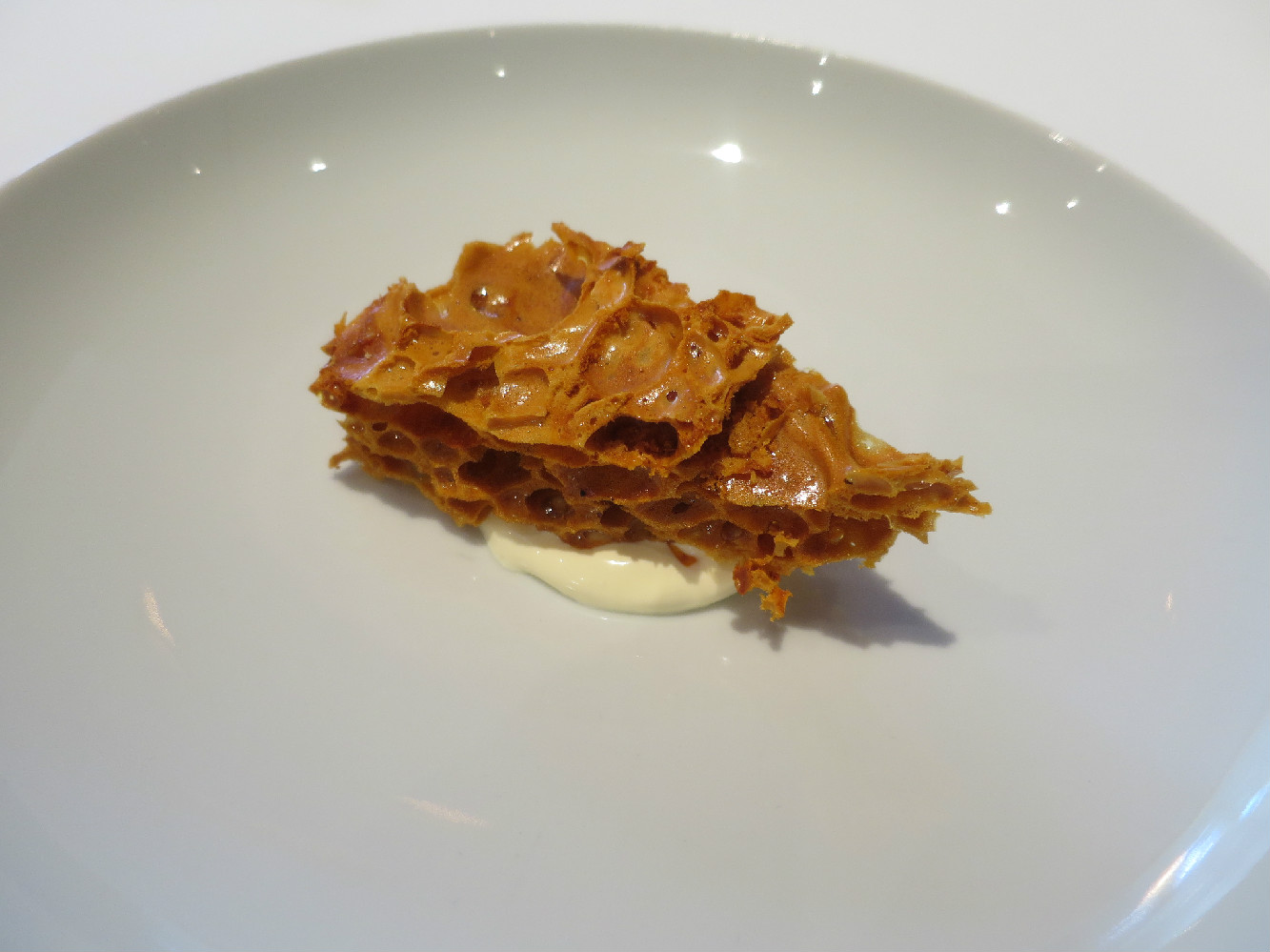 So this suburban restaurant that afternoon showed me several techniques, over the length and breadth of its maximum degustation option of 8 courses, that are beyond the reach of a ordinary home-maker, but the kitchen often forgot to pack in the profound taste that even a domestic kitchen can be honed to produce.

Perhaps Marque’s flavours were significantly different on the days when Vir Sanghvi and the Australian critics like Pat Nourse dined here and then sang hosannas of how Mark often hit the bull’s eye. On the technical front, yes, he’s savvy enough to appease the turks and teachers of high-end cuisine, but in wowing the tongue, Best missed the Mark that day. However I wish him well and will risk taking a second chance with a bigger arsenal of tastings at his restaurant, when I return to the Pacific megapolis that is Sydney.