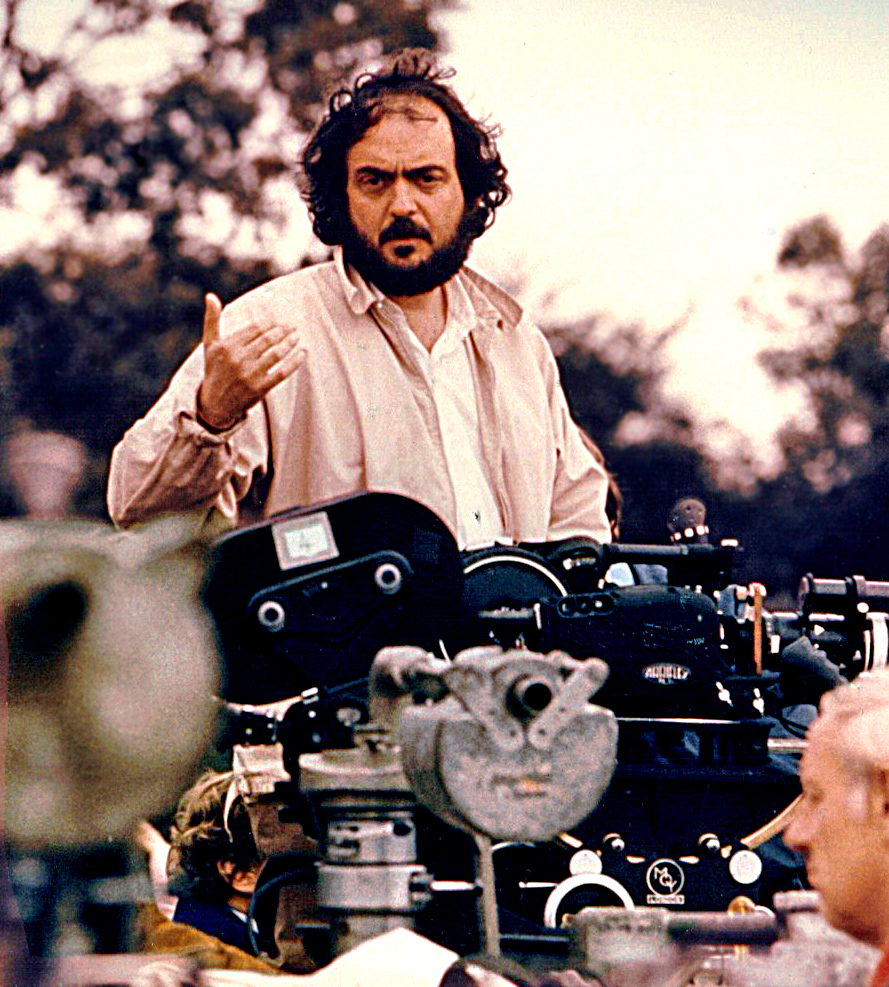 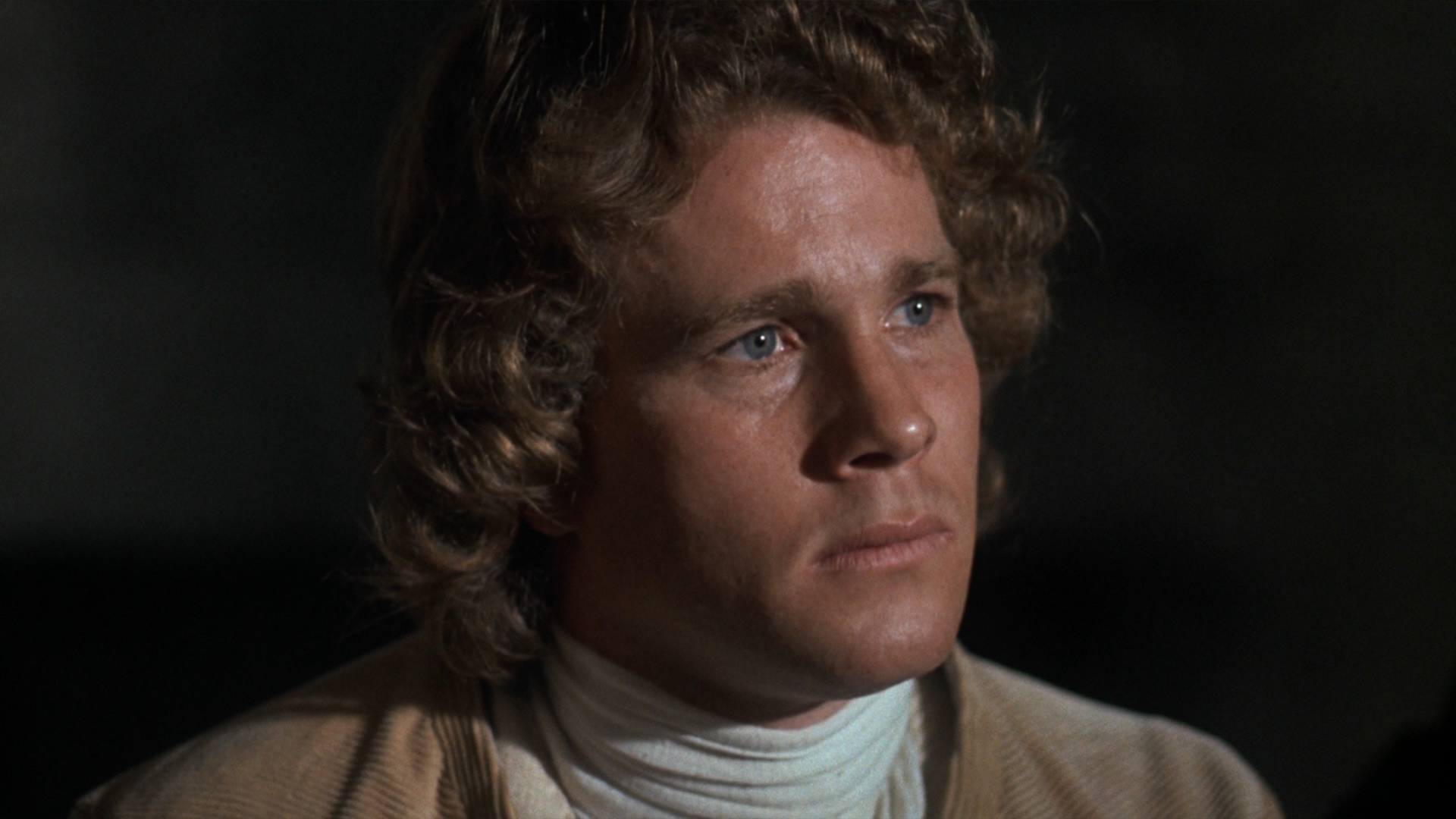 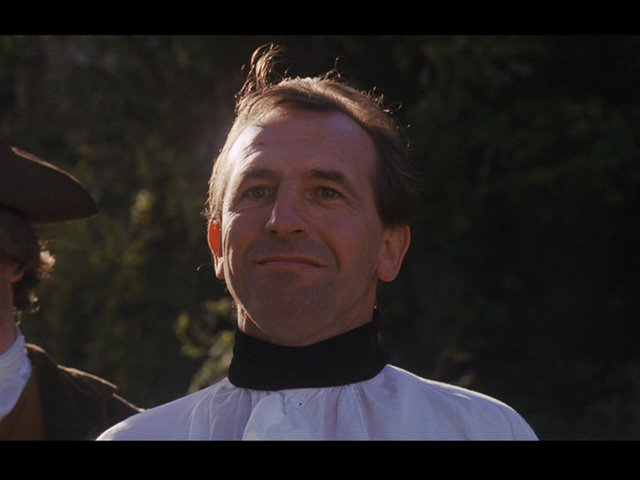 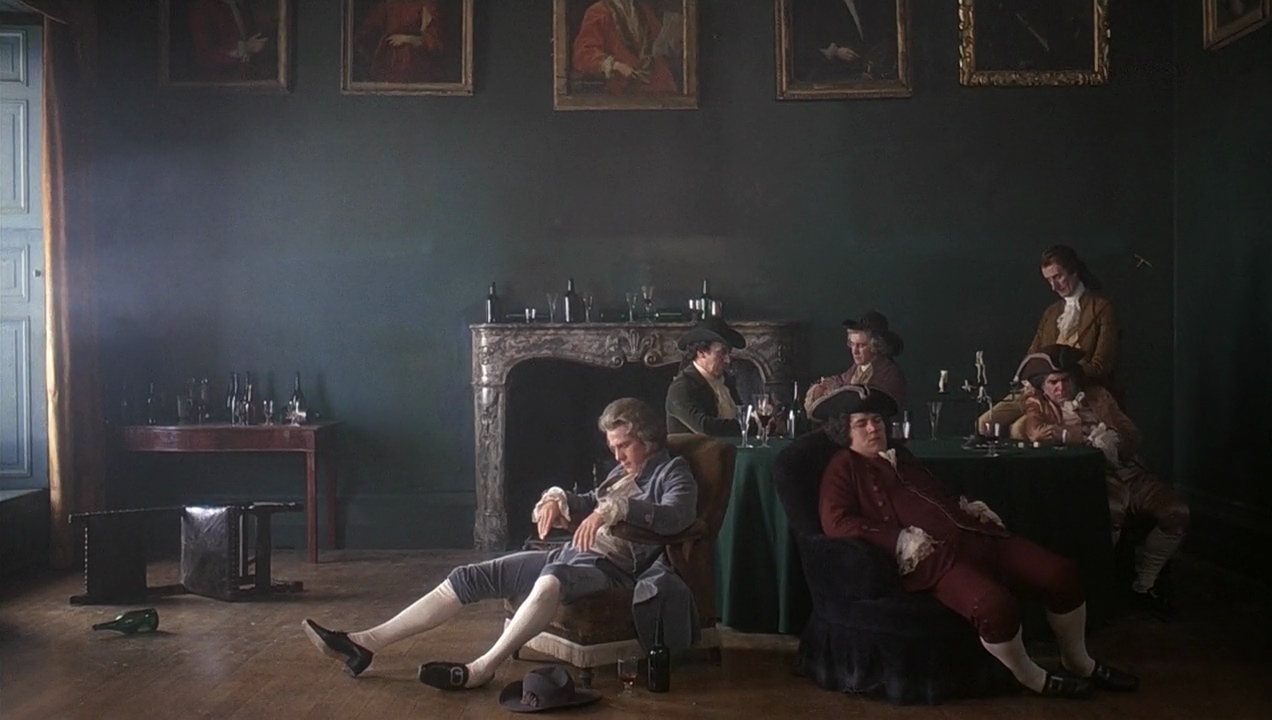 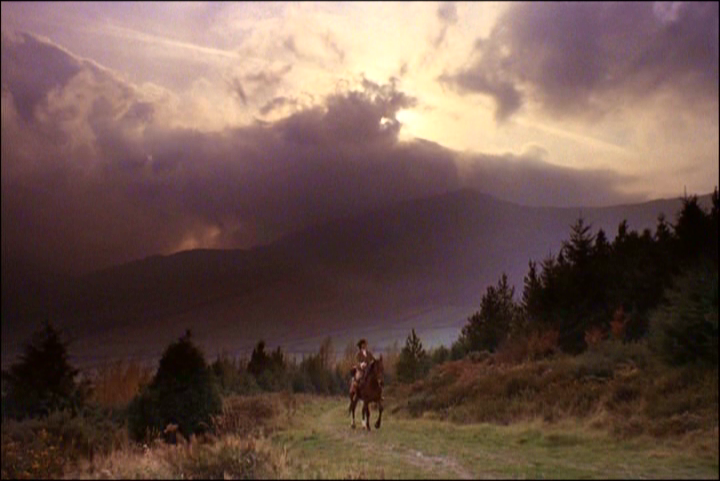 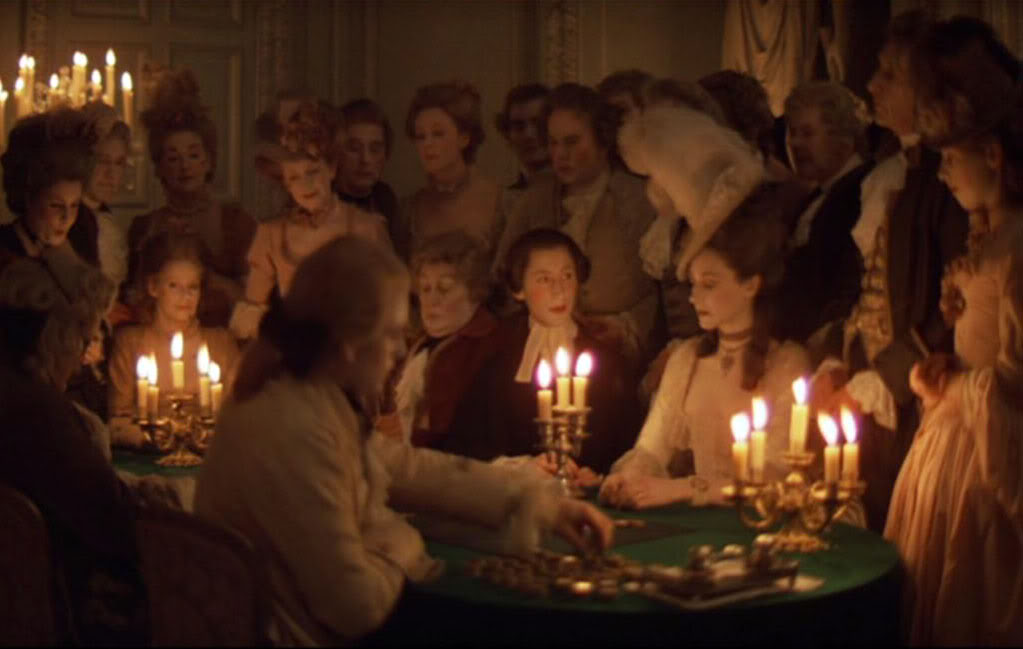 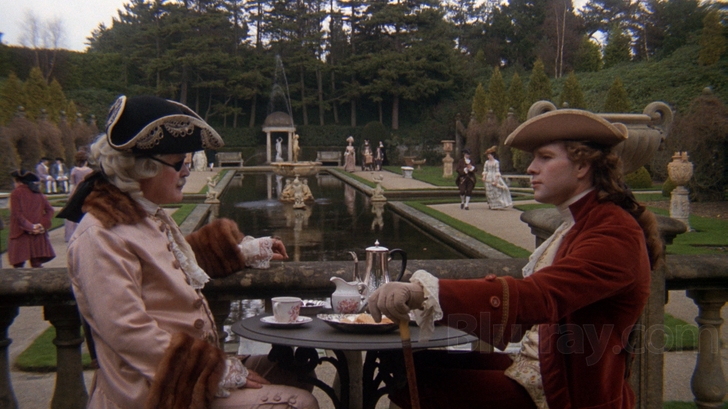 5 stars out of 5 (An Instant Masterpeice)

Pete Wells, Esq. chose the following lead-in to his article in a New York Times 2012 piece which smashed Eleven Madison Park for undermining their multicourse menu with overbearing tableside commentary by the servers : "You know a movie is in trouble when a voice-over narrator has to explain the plot that the combined efforts of screenwriter, director and editor failed to make clear". While Mr.Wells is a good restaurant critic, I am glad that he is not a film critic, and I suspect that he has an unfortunate facet of mind that makes him to unsusceptible to the infinite charms of the voice-over in such British films as Kind Hearts & Coronets, and Barry Lyndon. Both films are legends, and we will confine ourselves to the myriad magic of the second film in this review.

Many film aficionados have a perpetual fetish for '2001 : A Space Odyssey' - as great as that Kubrickian movie is, I believe that Stanley K. was born to direct "Barry Lyndon". It is classically British in its quiddity, penned by William Makepeace Thackeray as a serialized picaresque novel that was cast into public view in 1844, and it took more than a hundred years for a man from another country to step onto the same soil and bring those words to stunning pictoral life - that man is known today as the patron saint of film-makers who are sardonic, cool and powerful. Stanley Kubrick cast aside the original tactic used of the rakish protagonist himself being the narrator - this auteur instead chose to employ Michael Hordern's voice the measured and omniscient nature of which is quite familiar to today's viewers who have been brought up on august voice-overs employed in wildlife documentaries on Discovery channel and National Geographic. But in the cultivated genteel spheres that Redmond Barry first treads and then tramples, what is wild? It is the progressive nature of his own mind, and the crazy armies that he unwittingly channels through.

By the film's end, it is very difficult to sympathize with Redmond Barry who rises from a tough beginning in rural Ireland in the 18th century, to eventually come into receipt of a greatly comfortable life. But the central triumph here is that we receive a "God's Eye" view of a complete life - with a perspective like this, the protagonist does not matter that much.

Exquisite visuals inform the story from the get-go. The first frame shows Wordsworthesque beauty as it focuses on a scene in the Irish countryside - fifteen degree celsius, and the sun is barely bright but the vista softly glows. A duel is underway and it presages the arc of the rest of the movie. We are then introduced to Barry (an outstanding Ryan O'Neal) - a brave young lad who is afraid to dip his hand into a comely bosom on the same lady's command, but one who, for the sake of love, risks grave physical injury. He is sent tumbling into the unfortunate ranks of the British Army and thence into the infernal bowels of the Prussian army. Guided by a kind soul, he returns to civil life by cunningly playing cards throughout the courts of Europe. An extension of that canniness and a colluding stroke of luck lands him a fabulous life and a beautiful aristocrat as wife. But having received this double fortune, he almost inexplicably......let me leave the sentence to tail off like that. What remains rock-steady is the lovely perspicacity of Kubrick's directorial vision and tenor.

Kubrick gets his kicks very early in the movie, and we speedily realize that this isn't a snooze-worthy period drama. There's a scene of sexual playfulness in the movie's third scene (and even the two previous non-romantic ones carry a hint of the stuffy genre being mocked) - anyway, the sequence of carnal fun could easily have snowballed into the pornographic fiesta that banks on the ample tight bosoms of medieval England's corseted maidens. A captain (Leonard Rossiter) who sports asinine hauteur and a moronic smirk is thrown into this mix and he is milked for maximum mirth. I had howlarious fun in the scene where a young lady (loved by Barry) and the captain have a romantic rendezvous - the lady says "Aaaah you men! You men, John!...your passion is not equal to ours ,we are like some plant that I read of...we bears just one flower, and then we die" while the bagpipes calmly play away hammily - the scene changes dramatically but the entertainment continues. In the second half, the dramatic force comes from the vehement, articulate anger of a severely insulted heir and Barry's delusional belief that he can merrily tap-dance through high society while slaughtering all its unsaid edicts. Through all this, the calm observational tone paired with John Alcott's beautiful framing and vistas of stately splendour are maintained -one scene after another presents like a thoughtfully played card. The story's bare bones and ample flesh are consistently clad in an immaculately tailored brand of splendid English, perfumed by a wit that often elicits a wry smile (with Kubrick, the smiles tend to be wry). Background music is elegantly orchestral and the theme music, especially in use of the piano, becomes a finely reflective asset.

To expect tenderness in a Stanley Kubrick movie is like trying to find enough water on the moon - it will be difficult. At the end of his uncompromising war drama 'Paths of Glory', there's a song sung by a young woman in a room full of wolf-like soldiers who are silenced by it - several observers felt what a touching and unexpected finale that was. For me the song fell flat, and felt forced - an ill-advised endgame by a film-maker whose lack of knack for sentimental scenes made his 'Lolita' a mockery of Nabokov's magnificently emotional novel. But in Barry Lyndon, empowered by a narrative that awakens the genius in him, Kubrick is roused to effectively depict emotional depth - watch the last scene between Barry and his son - there is so much of tenderness in the father's "Of course I will" reassurances that it is nearly enough to atone for the butchered sentiment in all his other movies.

As for sheer raw power, witness what transpires in a scene where the little son walks with hammer-soled shoes into the hall of his mother's piano performance. Kubrick takes the sac of the period drama and blows it up so rapidly that it explodes in a savage dazzling rupture of the genre's staid conventions.

Even small details exert their effect, like a French aristocrat sandwiched between two of his molls at the cards table, who is quietly yet outrageously pansy-like in his behaviour. And apropos the sweet German lass in the countryside - note how Kubrick records the failed syntax of her slow English- "There is nothing to eat something, since Grunberg" - he does this not with a sense of fun, but out of a documentary-like need to record things as they are. When a personal assault alarms a refined crowd, the camera amplifies the urgency of the scene with its slanting close-up follow-through. The title-cards that announce the stages of the movie are inscribed with flamboyant lettering, and the final mesage they carry, has simple but humbling philosophical perspective.

Ryan O'Neal's title performance is pitch-perfect - his face is consistently restrained and yet the physiognomy always comes through. His manners remain soft and polite -yes, he could have been a real gentleman if only he had cultivated the long-lasting moral fiber for it. I've given significant thought to what explains his contrasting behaviour in the story's first and second half ,and though the voice-over gives excellent hints, a more direct answer may be beneficial. His innate nature manifests only later, once the rhythm of his life steadies- what came before was the chutzpah of youth. The depraved nature of his army life, however damaging, could have been shaken off by a good man. His mother is a pillar of support for him from start to finish, but the mentally strong woman never once tells him to persistently make peace with Lord Bullingdon, or to suspend his orgies. At a relatively early stage of the story, we see that a smartly clad Barry has escaped a thankless way of life and is contentedly traversing the countryside on horseback. The narration tells us "Barry felt once more that he was in his proper sphere, and he was determined never to fall again from the rank of a gentleman". If he had proceeded to settle down to a more conventional life of family and work, would he have behaved? I doubt it.

Michael Ordern's narration, given wisdom and humour by Thackeray and Kubrick, is never superfluous or gratuitous - it sprinkles seasoning with expert knack throughout this formidable cinematic feast. It stays silent whenever necessary, and it fills us in where the pictoral narrative is very unlikely to express finer points. When young Barry is obliged to leave home after much aggravation, we see his neutral countenance and may think - "Is he going to hang himself from the nearest tree?" But the narrator helpfully says "No lad who has the liberty for the first time, and twenty guineas in his pocket, is very sad. And Barry rode ahead to Dublin thinking not so much of the kind mother left alone, and of the home behind him, but of tomorrow and of all the wonders it would bring". When Barry leaves a comely German lass after profound intercourse with her, we see her romantic sadness and feel sorry for her but then the voice-over widens our perspective - "This heart of Lieschen's was like many a neighbouring town, that had been stormed and occupied several times before Barry came to invest it" And as the last example of this, when our hero surveys an elegant park in Britain, does he again, like a hopelessly incurable romantic, intend to chance upon a suitable maiden, irrespective of her finances, and fall madly in love with her? The voice from the clouds unclouds such impressions by clarifying :"Considerable experience of the world had by now dispelled any of those romantic notions regarding love with which Barry had commenced life, and he began to have it in mind, as so many gentlemen have done before him, to marry a woman of fortune and condition". Several times ,throughout the movie, I envied the voice-over for the exquisite economy and style with which it enriches Mr.Lyndon's world.

If all this has interested you, and if you'd still like to "demand satisfaction", it is quite likely, Sir, that 'Barry Lyndon' will give it to you.