In an industry ravaged by commercial demands and a largely half-witted film-audience, there are some blessed works which weave in and out of that business matrix, while throbbing with the work of artists who are working at the height of their power. This film is one such phenomenon. Director Imtiaz Ali finds his finest stride, Ranbir Kapoor spits pure abandon and A R Rahman brings the roof down with fireworks and tears. Rockstar coalesces their magnificence to construct a love story that needs tragedy to survive. And Flamboyance never leaves the picture. The middle finger here represents a sense of supreme balance. 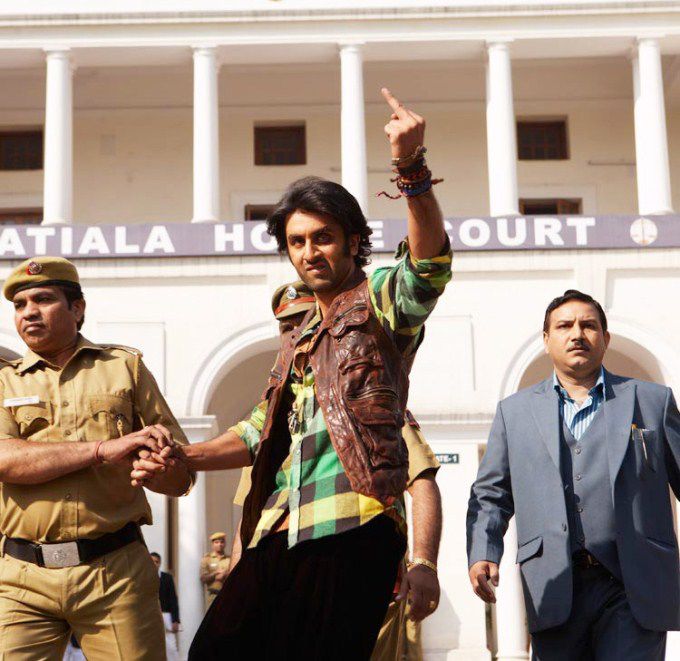 Rockstar's soul can be found in the deep throaty roar of Orianthi's guitar, in the story's free-flowing structure that flirts dangerously with dysphoria but is too spunky to be weighed down by it, and in Irshad Kamil's naked lyrics. One can see it when Jordan whisks away Heer like a flower plucked from someone else's garden and jumps with her into a Prague fiesta...and one can feel it when she runs bare foot across a cobble-stoned bridge and the screen spreads out to reveal a wide-flung quilt of clouds while Mohit Chauhan & Cellos exactly capture the music of that scene with haunting beauty. And one can relax but only just a little in the swooning romance of it all as the ineffable Tum Ho plays and as they both lie happy in the simple lush magic of a spring field. There, Jordan gazes at her with desire, but he doesn't realize that he is a lover slain by fate. 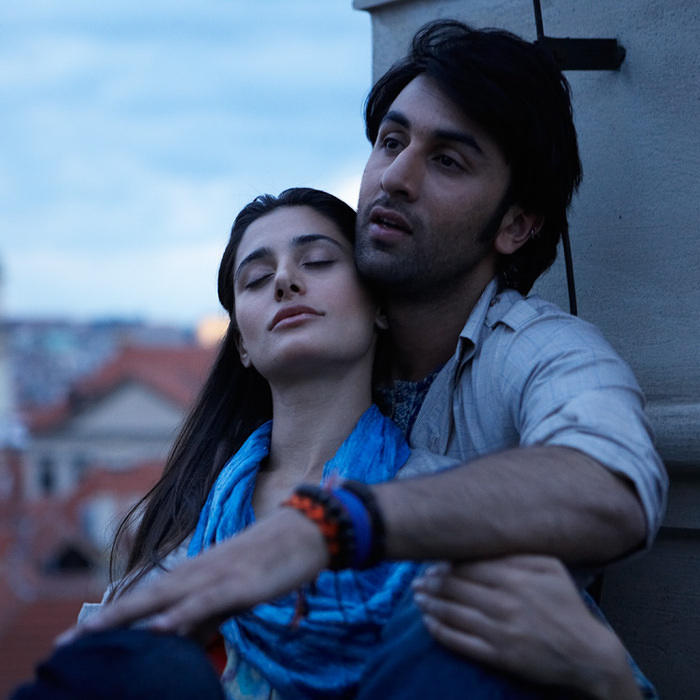 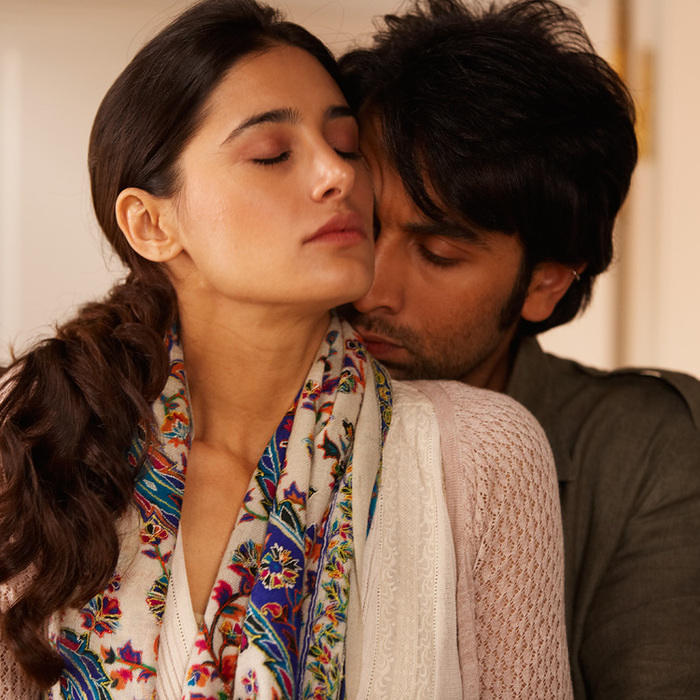 Janardhan (Ranbir Kapoor) is a young Delhi boy whose earnest attempts at being a guitar-star are sabotaged by specimens like a couple of policemen who slap him and tell him to sod off. Frowsy J-boy has enough spunk to trash shyness, go up to his lady in college (Heer played by Nargis Fakhri), and profess how fetching he finds her. Oh-so-pretty Heer on the hand retaliates by a Brit-accented "Bugger-off" ( desi boy can't understand what she means by hissing "burger off"!) and by facial and verbal mannerisms that behoove a trying-hard-to-hip American schoolgirl. His renewed attempts make her confront him ,upon which the essentially decent Ranbir goes all silent and demure ,and this becomes the thawing point which makes Heer takes a fancy to him. Boy & Girl buddy up, go to domestic porno theatres in a spirit of cheer that Cybill Shepherd of Taxi Driver never understood, and they top it off by embarking on a motorbike ride through Himalayan snow-swept hills & vales. It's the stuff of young platonic dreams and director Imtiaz Ali a little belatedly lets us know that Heer is already engaged to be married. In his world, Doomed Romance arrives even before the audience has settled into the love story.

Thrown out of the home of his malignant brothers, Jordan (Janardhan Redux) struggles with sclerosed music companies but his own talent and The Hand of Fate anoint his forehead. An Europe tour catapults his kick-ass tunes into tiers of gladiatorial opera houses and soon J is a famous heart-throb whose fledging fondness for Heer has raged into an inferno, nevermind the fact she is already married and now lives in Prague (he had gallantly helped in the arrangements of her marriage fiesta) .Finding and eventually frolicking with her, he resurrects a buried romance, but when the fun becomes too much, Heer cries foul in the name of propriety. But Jordan isn't finished with her.... 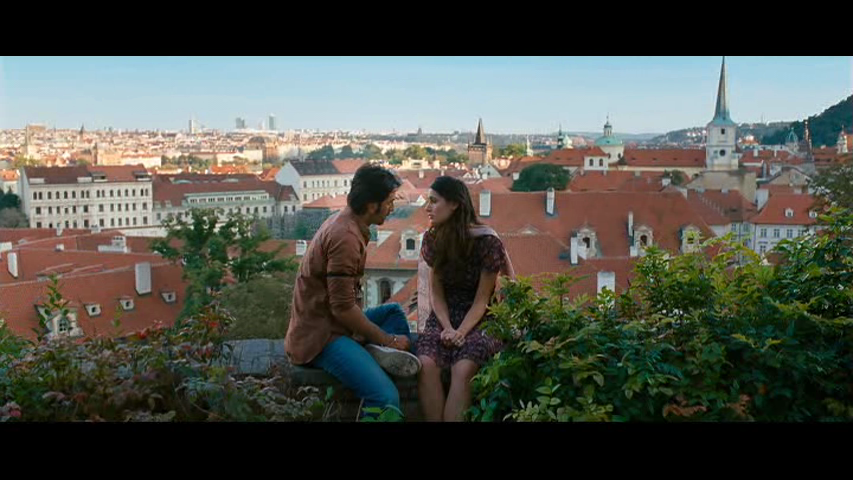 An angry young man bristling at an already rabid pack of media, a star prone to temperamental outbursts, he becomes a fevered dude for whom neither fame nor crowds nor money matter. What does is the serious dedicated business of drowning in a unrequited ocean of desire... 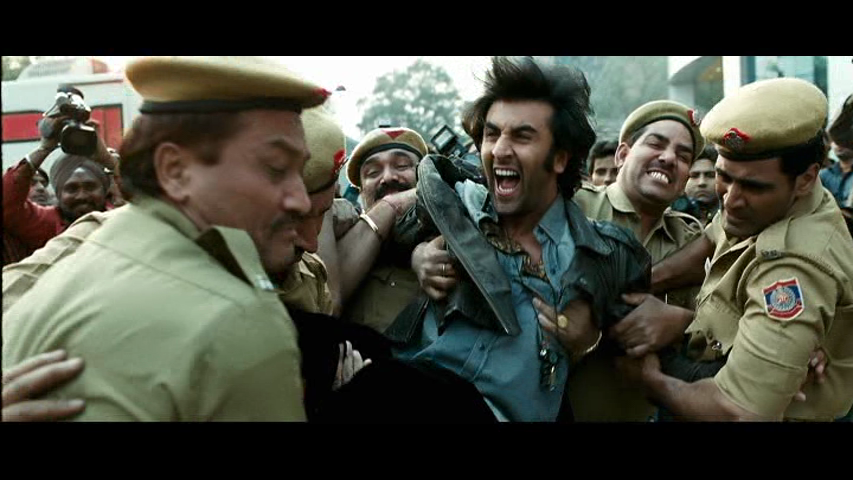 mtiaz Ali cuts and mixes hard reality with sequences of dreamy abandon. We see his talent for constructing memorables scenes - the one with Jordan and his manager in the middle of a busy Bombay street, and a slowly intensifying sequence with Heer in the balcony while the born-again Janardhan on the street woos her as only he can (the mystic Ku Faya Kun reprises in the background and parallels surface between similar set-ups in Romeo+Juliet and even Cuaron's Great Expectations) Ali has his fun skewering the media ( a shot of Jordan bumping onto a car is played 8 times back-to-back by a ditzy channel) and lampooning a music baron .But Ali, his fertile inspirations notwithstanding, falls prey to a brief but costly scene of maudlin sentiment at the film's very end. Such sugary errors are greatly detrimental to the finishing flavour of great movies , and other critics have criticized Ali even in his later films for this repeated tendency to shove "picture postcards" into his movie endings.

One of Rockstar's key strengths is the lightness with which its narrative structure glides and leaps -top editor Aarti Bajaj serves up a expert lesson to budding splicers. Pic opens with a small visual window showing documentary-like footage of people enjoying the buzz & lead-up to Jordan's concert. That compressed screen suddenly spread-eagles into a classic European canvas of pretty urban roofs cut by blue river. Cut encore to Jordan in a brawl with five guards before he escapes, gatecrashes into his own concert and faces the cheering audience, bloodied but still cocksure. Story then folds back to his innocent college life, graduation to bigger playgrounds and onto his oscillation between the dual drugs of therapeutic music and inflammatory love. 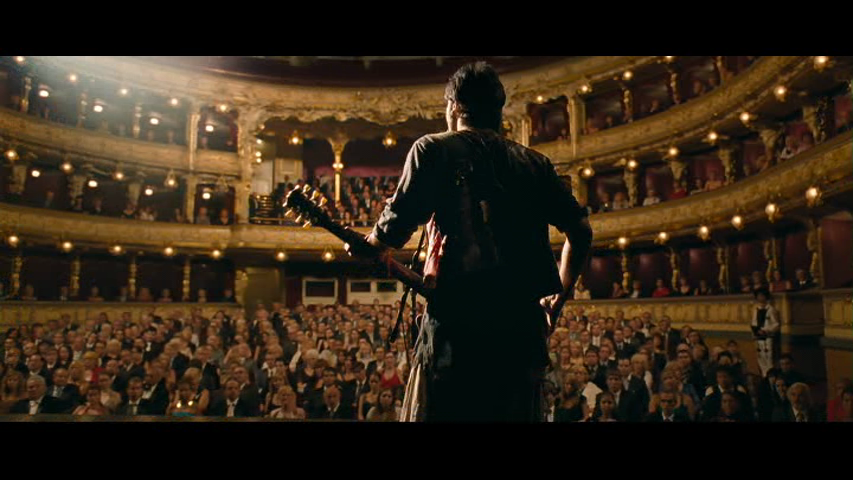 Cinematographer Anil Mehta jam-packs this film with so many stunning visuals that he lays equal claim to the aesthetic wallop of "Rockstar". Whether it is Prague's fairy-tale countryside, the rock-performance stage or the face of the lovers, Mehta reveals his shot-taking vision and skill with natural light. When J asks the canteen manager for refuge at night, the shot maximizes scope and symmetry to show him standing in a narrow street between rows of houses hemmed in like a municipal gorge .One notes his trademark yen for letting his camera glide into the scenes ( beautiful captures of Nizamuddin Dargah, a journalist speeding down a footpath) .Terrific HD quality of shots are evidenced in the the swansong "Naadaan Parindey" where J is captured stepping out of a Bentley while vomiting as the girls shriek in consternation and then him in a bathtub with the shower falling like pearls while a guitar burns in brilliant flames. 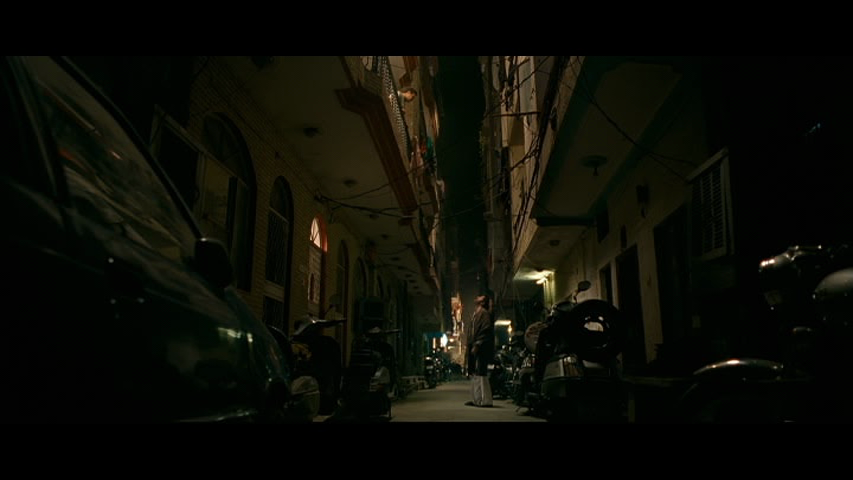 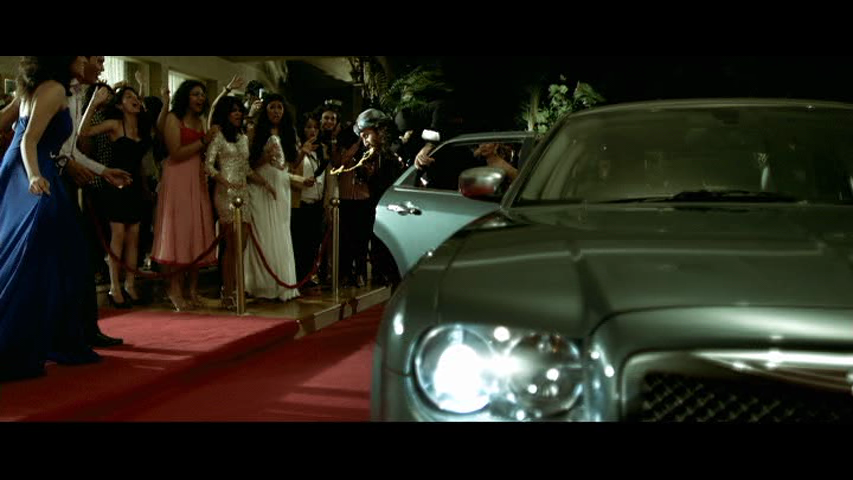 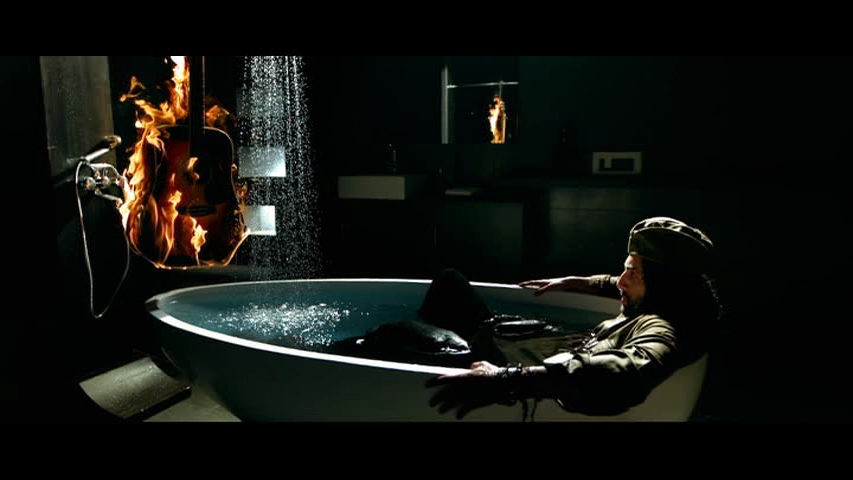 Isai Puyal A.R. Rahman has trained in Trinity College, Oxford and apprenticed under several Indian composers who were liberally incorporating Western music. This syncretic cascade is best evidenced in "Aur Ho" - orchestra is fused with the thunder of a guitar that is married to Alma Ferovic's aria and a Carnatic Raaga is mirrored in Mohit's "Aur Ho Aur Ho" chants. It's a trip around the world and after spinning in and out of it, you're left at the top. "In this world of you people, at every step of the way, a man is wrong" -thus begins the powerful "Sadda Haq" - a chart-buster that has terrific picturization and is amongst the best from the subcontinent in rock music. In the less trippy but equally frenzied "Naadaan Parindey", when the exhausted and pleading Jordan sings "Piya ki milan ki aas' for the second time, that pronunciation of that "aas" is drawn out by Jordan just a bit more, with excruciating emotion, as if a branding iron has just been pressed into his flesh. Mohit Chauhan - the lead singer - fuses substance and style with soaring panache. There's much more but let it suffice to say that Rockstar's sublime songs would require at least a full essay to do them justice (there's an outstanding music review by Suresh Kumar at backgroundmusic.com)

Some critics have posited that Rockstar has a scatty premise viz. you have to suffer in order to be a good artist. What can I say to these morons? Rockstar has no such message, of course. It only bandies this line in passing like a casual joke. In fact like a number of uber movies it has no message at all - it sports only clean emotion and style.

God-given looks go a long way, but God-given ability goes higher. Nargis Fakhri has intoxicating beauty, and though she may not make you go weak-kneed with her acting skills, she nevertheless has a winsomeness, a fragility which is again packaged in the wondrous vision of Rockstar's designers. She may sometimes be a little off-key in her Hindi pronunciation, diction and emoting, but her character's overall impact subsumes all faults and makes her one of Hindi cinema's most delicate and lovely martyrs. If Imtiaz Ali had succeeded in distilling a faultless performace from her, it would have been too much of a good thing- whereas the performance we actually see is a perfectly merciful blend of visual tendresse and human imperfection. 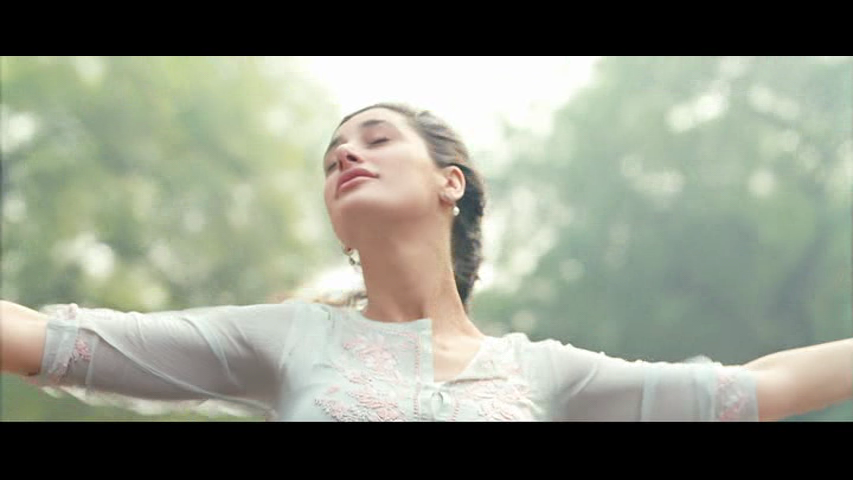 After seeing this film, I didn't want to waste any energy thinking about which other actor could have fitted into the main role. If I had any prior doubts whether Ranbir Kapoor could be a class-leading actor, he destroyed and kicked out of the window any such concerns by the time the movie ended. What he brings in, is an electrifying performance of an unhinged rockstar and a man maddened by cursed love. For much of the film, Jordan jokes away grim realities with charming glib talk, it is only at a scene towards the end when he gets no response from his outsourced heart that he recoils like a person in whom icy reality has finally sunk in.


Watch the feverish intensity with which he snarls out the lyrics of Sadda Haq ,and the insane casualness with which he commands his woman to leave everything and go with him. The sensitive boy from the story's early stages is consumed in the ashes of metamorphosis, and one does not quite know when it is that the pupa rips open to let loose a man teetering on the Edge. If you can't be a Rockstar like him, then don't be a Rockstar at all.