This is a continuation of the review the first part of which was published three months before this one.Roquette seemed to be a restaurant whose charms were undermined by the food which needed better flavouring and more inspiration. So without much ado, let me proceed to the impression made by certain other dishes on the menu.

In expectation of kicking off an ardent affair, an order was placed for the seafood chowder. It arrived in munificent fashion, was tasted carefully and mulled over. Was I going to reject any consideration of robust earthiness,hanker only for empyrean heights of taste and lament that this dish lacked astonishing complexing of flavour? No!, instead, for this kind of taste,with this quantum of portions, at a tariff of NZ $16.9 ,I piped down and ladled in. This chowder admirably fulfilled its purpose,namely to capture a synecdoche of the ocean's bounty in a bowl of creamy deliciousness (with a good cameo by coriander). Hearty chunks of marine comforts nestled in its depths: prawns,morsels of mussel minus the funk, soft fish and potato all swam in peaceable cohort and surfaced to yield satisfying bites. Yup, it came close to being identified as that redolent chowder made by someone's Mama in New England! (my mom makes fantastic fried seer fish, but that's another story) Moreover,the stew had been served up in generous portions-a light meal in itself- a contrast to the measured offerings in my previous meal here.

This fulfilling start to the dinner challenged my insidiously rising preconceptions about this place- but I dont mind being proved wrong,especially when I'm pleasured in the process. Anticipation now perked up.Was a remarkable turnaround on the cards? Would Thomas Keller's happy horcrux, buried for some inexplicable reason,in this very kitchen, now erupt?! Would this experience become the culinary counterpart of a slow start,steady acceleration and an ultimately inexorable crescendo a la a first time watch of the "Deer Hunter"? There was no venison on the menu,anyway I ordered the" Char-grilled Free Range Chicken with a bacon,mint and feta Risotto". The marquee protein occupied the center of a sea of risotto,its surface topped by impressively ascendant swirls & filigree of roquette. Seizing six-inch excaliburs,I cleared the thicket of leave and shoots to get to the bird. The chicken breast was crested by an orange-gold exterior, stippled by pepper. Eaten promptly, before the surrounding moisture got to it, it yielded a fairly enjoyable savoury contrast between the soft flesh and the crisp handsomely coloured surface. But 'twas not a breast meant to induce rapture (I think the women too would agree) Anyway,some extra solace could be conceived from knowing that the fowl had run free before running afoul of its own longevity.

The risotto, in the manner of a an eminently desirable lady, had a lot of players gearing up to round it out ,but none managed to succeed. Bacon,mint and feta's persuasions were pre-empted by a lemony olive emulsion that flecked the top and skirted the circumference of the dish, seeping a little too well into the sauced rice and hijacking its creamy flavour.

Not finding gratification on the "turf", a return was made to the "surf" with a "Trio of Fresh fish with garlic roasted potatoes,wild roquette,cherry tomatoes & a lemon-'n'-herb vinaigrette". Three generous fillets of fish were served with plenty of spuds. All the cuts of fish were cooked to a delectable turn- one could discern the Salmon's sharper piscine flavour with its easily dissociable orange-pink flesh, the Snapper's velvety softness, and the Kingfish's hearty,slight chewiness. Inspite of these luxurious star players, there was an acutely felt paucity of imagination in this dish's textural contrast (apart from the differing feel of the three fillets) and medley of flavour. There was no pan-roasted crisp exterior to liven up the sauteed fish. Potato can be a terrific accompaniment when cooked with specific attention to its seasoning and eventual mouthfeel,but here they were just ordinary sidekicks.

On one busy night,I sipped a spiffily mixed cocktail ,while avidly drinking in the ambience,mood and the sight of electic folks who filled up the place.A pleasant lady amongst the staff managed to keep a passable vigil over me- she must have presumed and pitied that I was in a state of bored loneliness.She drew up and queried "Hello, are you okay? Would you like to read today's newsapaper or something?" No,I thought, I'd like Monica Bellucci sitting across from me. Ah,the impossible regret of unfulfilled desire and unsaid words! That evening,Colin was at his charming best in making me feel like a special guest. I was also seated at a more centrally located table that showed off to better effect the restaurant's aesthetics and the view past its glass walls. On another night,a young stewardess barely past teenage, had asked me what I'd like to drink.After taking the order for a glass of ten year old Glenmorangie ,she went to the bar and returned with a sheepish smile,apologized and asked again what my order had been.My request for starter of antipasto was initially inferred by her as one for a "mezze platter".She later proceeded to diligently read out from a hand-held booklet a collection of no more than a dozen words which encapsulated the marquee's main description.It was faintly amusing to witness her goofy youthful charm- its perhaps another indicator that Roquette is a more casual,less detail-obssessed restaurant and not the precision-driven operation that I had inexplicably presumed it to be. On my last visit here,the hostess offered to take my jacket- the lack of which offer I'd noted in my previous review. But later that same night, that impression was frittered away when for a good ten minutes or so, the place had at least thirty diners being attended to by just two waitresses.

On first impressions ,an "Antipasto" seemed a cornucopia of delights- an asssortment of umami, astringent and savoury notes. Let me take take the dangerous liberty of conveying to you in 15 seconds what I chomped through 15 minutes: The prosciutto's fatty slickness was ensconced next to crunchy Ciabatta,placed close to the feta's salty creamy goodness, adjacent to the brined and oiled semi-dried tomatoes.,nudging the refreshing smokiness of green-'n'-brown olives which was sitting atop a commendably restrained pesto, layered near a coconutty guacamole that was within seeping distance of a trio of marinated artichoke,caramelized onion & pickled gooseberry- all of these gheraoed a small ceramic citadel that contained chopped smoked salmon, crisp breadsticks & the ubiquitous crown of roquette. As if this surfeit of cameos wasn't enough-there was another player- a crisp pickled vegetable resembling a tiny courgette or the Asian 'bilimbi' -its composite taste reminiscent of the Indian Ayurvedic commercially packaged jam-"Chyawanprash".I don't think you'll be astonished to know that by the time I had polished it all off, palate fatigue had set in. I lumbered onto the main course, hoping that it would present a more singular seduction.

It was my mistake to opt for Carbonara when the kitchen's chops could have been better tested with "Gnocchi with baby spinach, roasted peppers, mushrooms & a tomato basil sauce". The former proved to be a safely pleasurable bourgeois-bohemian blend. Eschewing a leaner subtler style, it was pleasantly unctuous and familiar, with the pasta's agreeably pliant mouthfeel, zesty mushrooms, and bacon all bathed and united by a cheese-laced sauce. It is probably the judicious consumption of dishes like this that go into the sculpting of those luscious beauties that Italy produces and showcases on a dutifully regular basis! Colin glided up and queried "Are you enjoying your pasta?" for which he was given a truthful "Yes".At least on occasions like this, I have to credit the man with making an interrogatory offer that one cannot refuse.

The last savoury main I tasted here was a Pork Chop. The quadruplet of ladies at a nearby table couldnt resist taking a gawk at it and asked the waitress what it was. It was a Cadillac-size hunk of meat - on its boot,there was mounted a dollop of the apple-'n'-thyme slaw. I cut through the expanse and took a bite of the pork. It revealed a mouthful of that crisp tenderness that distinguishes this meat,and the surface caramelization lent a further layer of flavour. A taste of the slaw divulged the apple's vibrant crunch which shone through the cream. In a perfect world, porcine delights come clean off the bone when sliced- the pig reveals itself to be eternally obedient. But the pork here was apparently spunky,requiring a fair amount of to-&-fro slashing. As time passed with each movement of my knife,the meat seemed to misunderstand my need for a "textural contrast" and ultimately became an outright rebel.I'm not exaggerating when stating that I became quite exhausted and embarrased by all the strenuous knifework. A thoughtful chef like Ferran Adria would have provided a mini motorized chainsaw with a pork-chop like this. When my knife would suddenly fall through the final lamina of meat and inadvertently hit the plate with a clunk,the ladies nearby stared ,as though I'd wolfed down all the food and was now attacking the porcelain.What started promisingly, had petered out.


'Chocolate marquise with a forest berry gelato' did not live up to the sensual luxury hinted in its name, and was a simplistic middling combo that usually occupies display counters of ordinary canteens. 'Petit fours' - a separate dessert on the menu - arrived in a two-tier curate stand and were listed on the menu as "a home-made selection of all things sweet"- it could have come from my own home if I were to be given a few days of training. Chocolate Eclair was the only entry meriting half a nod, the others were ho-hum: a quasi-Indian "peda" with micro-bits of apricot, Choco fudge ,an under-sexed raspberry cheesecake and the last - a strongly tart boysenberry mini-pie that I'd rather use to kickstart my palate after a long day's fast. Desserts,of all else, lack ambition here.

Roquette ,after these additional visits, makes a definite impression as a restaurant that will have to execute its current roster of conventional dishes on a higher level of finesse and creativity before it can even think of attempting more novel creations like the post-1990s nouvelle cuisine (which doesn't feature here,anyway). It is not a bad restaurant, but it is certainly uninspired- the orchestration of flavours is frequently underwhelming ,and the marriage of various components on a plate is only sporadically joyful. Since this place is taking the trouble to maintain an updated neat website,it might as well take a good hard look at its kitchen and ask whether being in the backwaters and getting a good flow of patrons has lulled it into a false sense of assurance.I find no pleasure in disparaging a hard-working kitchen- i dined here expecting a much better experience, but in each visit the sum-total has been disappointing. As a restaurant for folks for whom the "company is more important than the food", this joint may pass muster but the moment one considers the intricacies of "fine-dining",Roquette only ranks as a place that offers decent food in a reasonably fashionable setting with service that frequently manages to be above-average. For anything more, one is expecting more than what's on offer here. 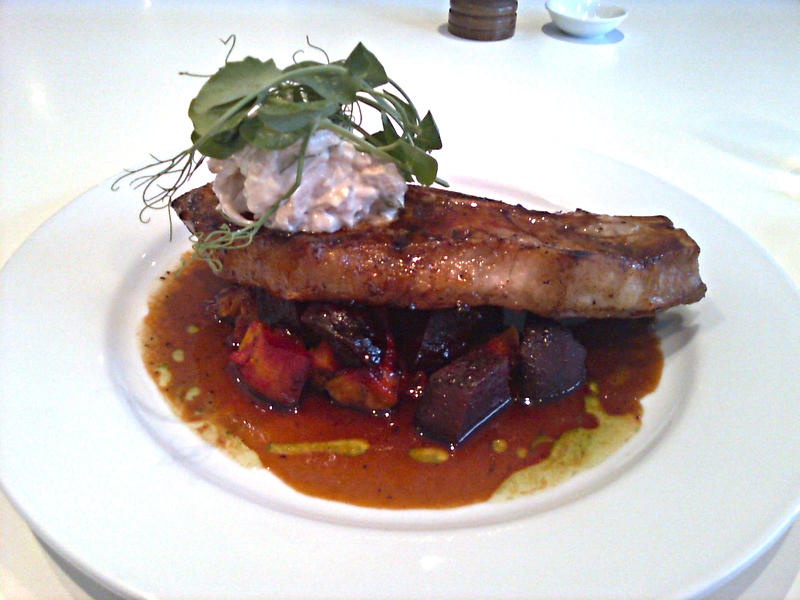 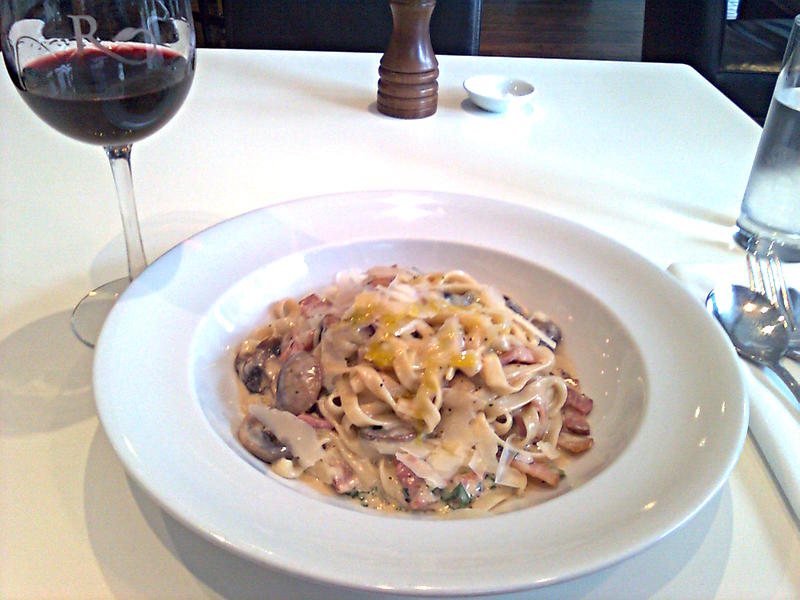 The second fish I caught in my life - a delicious snapper! Off Whakatane waters 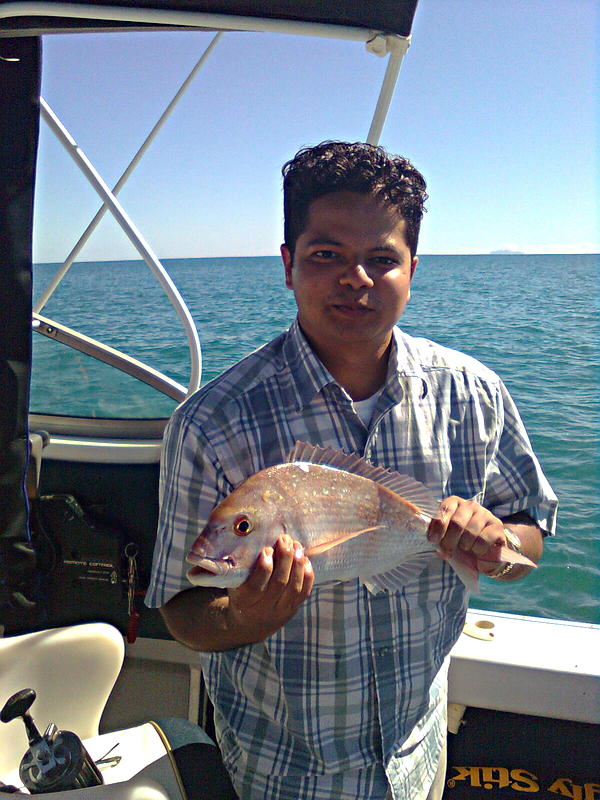 The way to my former workplace 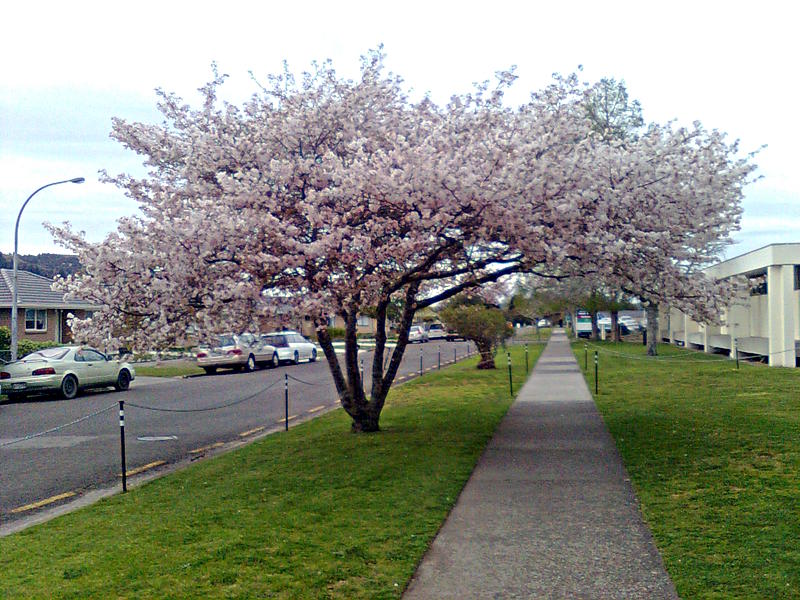 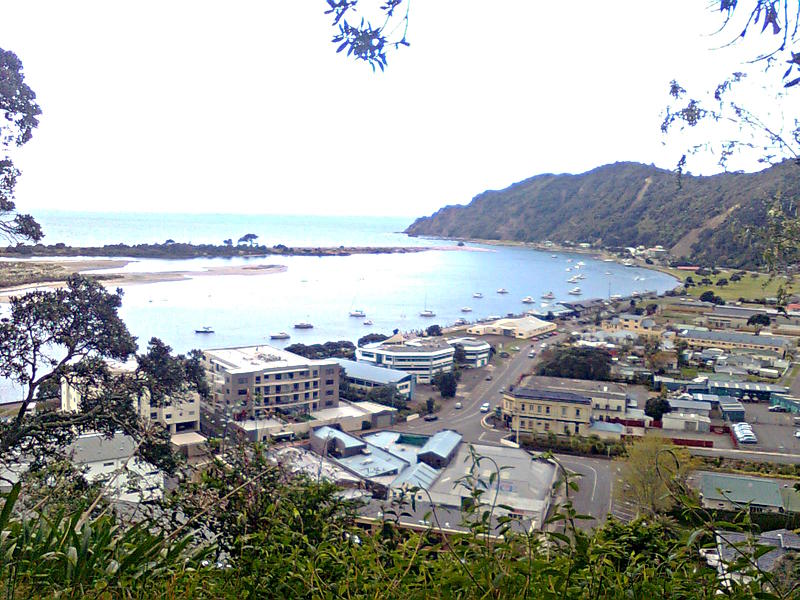 A tree in Whakatane, resembling an explosion