Zodiac Grill : Restaurant Review
3.25 stars out of 5 (1/4th of the way betwixt Good et Excellent)
Est . 1989 Bombay, closing November 2015 Mumbai.
Visited in October 2015.
Note :  Zodiac Grill will be closing in November 2015 - one month after my review (I was not responsible for this iconic restaurant's impending adieu.)
STATUTORY WARNING : Dear Reader, Kindly consider waiting two minutes for this page to load fully before scrolling down, as this page has fifty photographs.
What do you say to a restaurant that charges Rs.2300 ($46) for its coffee? Starting a review with such financial considerations is admittedly not gentlemanly but the certifiably aristocratic Zodiac Grill's tarriffs, which can easily climb upwards of Rs.10,000 per person for an indulgent dinner, cannot be excluded from a discussion of this restaurant which has no costlier counterpart in the whole of India. As for the Zodiac Grill Coffee, I as a thrift-understanding Indian daresay that it is actually value-for-money.  You may disagree but the table-side theatrics and the spectacular nature of the whole event of preparing this coffee from another planet, enthralled me. The taste, special though it was, became secondary. 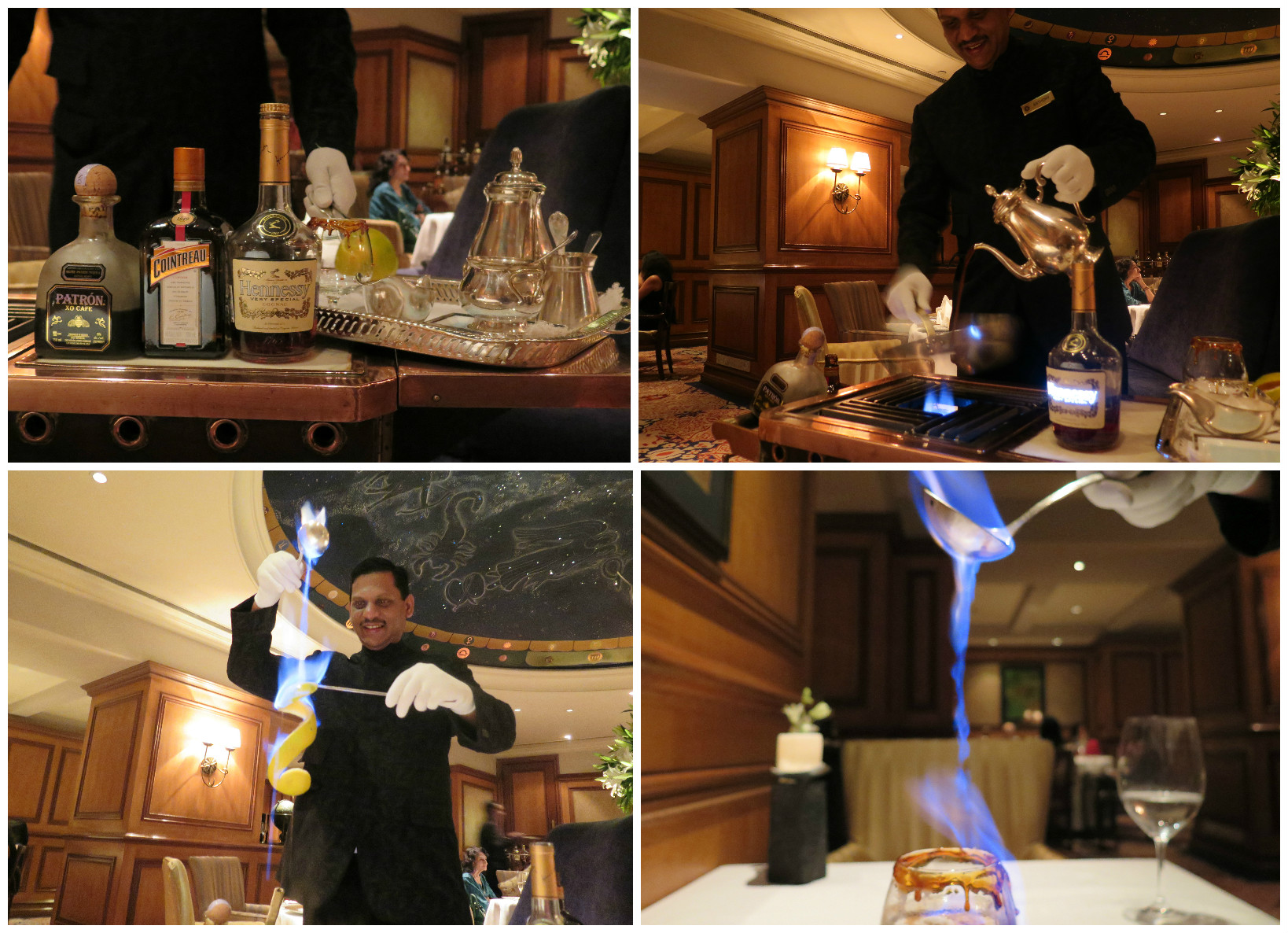 A black-suit-clad host rolls a cart tableside and on it are perched three snazzily petite bottles of liquor. There's Cointreau liquor, Henessy whiskey and Patron XO tequila , all of which will be joining the black coffee in the golden pan which blends your elixir table-side on a five-star stove. The host naughtily says "Please be patient Sir, your snake is being readied in the kitchen" and I spare him the fisticuffs in the name of jocular savoir-faire. The snifter placed in front of you has its rim covered and almost dripping with a dried honey-coloured concoction. Blue fire  swirls upwards from an alcohol-soaked spiral rind of orange and all of that flavour is poured into your snifter while another beautiful long flame of blue fire flows from the ladle to your glass as you lift this special Zodiac Cafe creation towards your eminently curious palate.

After twenty-six years of famous existence , this marquee fine-dining institution of Bombay, ensconced in the Taj which is India's first luxury hotel to be opened by an Indian (in 1903) will closing one month after the visit on which this review is based. Multiple reasons including changing fashions have been cited. Many regulars and celebrities have offered their regrets and it is not hard to see why. Few, if any, restaurants in India have such a luxurious and rich feel to their ambience. Polished wood-panelling covers every inch of all the walls of this restaurant which is open only for softly lit dinner, the high ceiling has a blue dome in the center inscribed with the icons of all the Zodiac signs, and table-settings display full-throttle luxury with rarefied brands like Bernardaud.
The menu offers a range of imported delicacies at the expense of giant carbon footprints, starting with astronomically priced caviar, and you can also discover New Zealand lamb here - at the mention of the latter , I no longer had the energy to inform the staff - though I had done so at ZG's "elder brother" restaurant Orient Express in Delhi - that all the outstanding lamb I'd tasted have been of Indian martyrdom whereas the half a dozen $50 versions I tasted in New Zealand's own fine-dining joints have all been all lacklustre.
Snap below : just outside the hotel !
Hotel Photos :
They even have a piano player who will last the course of your evening prior to retiring shortly before midnight. The suited gentleman deserves congratulations for stamina, but unfortunately not when it comes to expert nimbleness of fingers over keys. On another note, he gallantly played to requests from guests for their choice of songs , but when the manager asked whether I had any song in mind, and I requested Mozart's Rondo Alla Turca , I was informed whether an alternative choice could be suggested as the original one could not be played. I offered my sympathies and concentrated on the cuisine.
Esteemed Chef Hemanth Oberoi is now only a consultant at Zodiac Grill while the kitchen is run by Chef Rajendra Madik, and the progress and satisfaction of my meal were admirably supervised by manager Mr.Nishant.
Auspicious beginnings were heralded by Cream of Celery Utah soup which commenced my seven course degustation. Its delicate creamy excellence was exquisitely couterbalanced by pepper, but the haunting seduction of truffles (listed as an ingredient) still did not register with or entice my senses.
Upon my earnest request to let me have just a paper-thin slice of that fabled thing called the "truffle", they informed me that what they actually used was truffle oil, but this did not prevent them from later presenting to me a glistening black slice which neither looked nor tasted not "smelt" like the Real McCoy. But I appreciated their effort to humour me.
ZG's scallop appetizer reiterated my belief that the best scallop renditons are the pan-fried versions - the ones here had no caramelized exterior and though you could enjoy the tender feeling of letting your teeth sink into soft seafood , there was no riveting accentuation of taste. 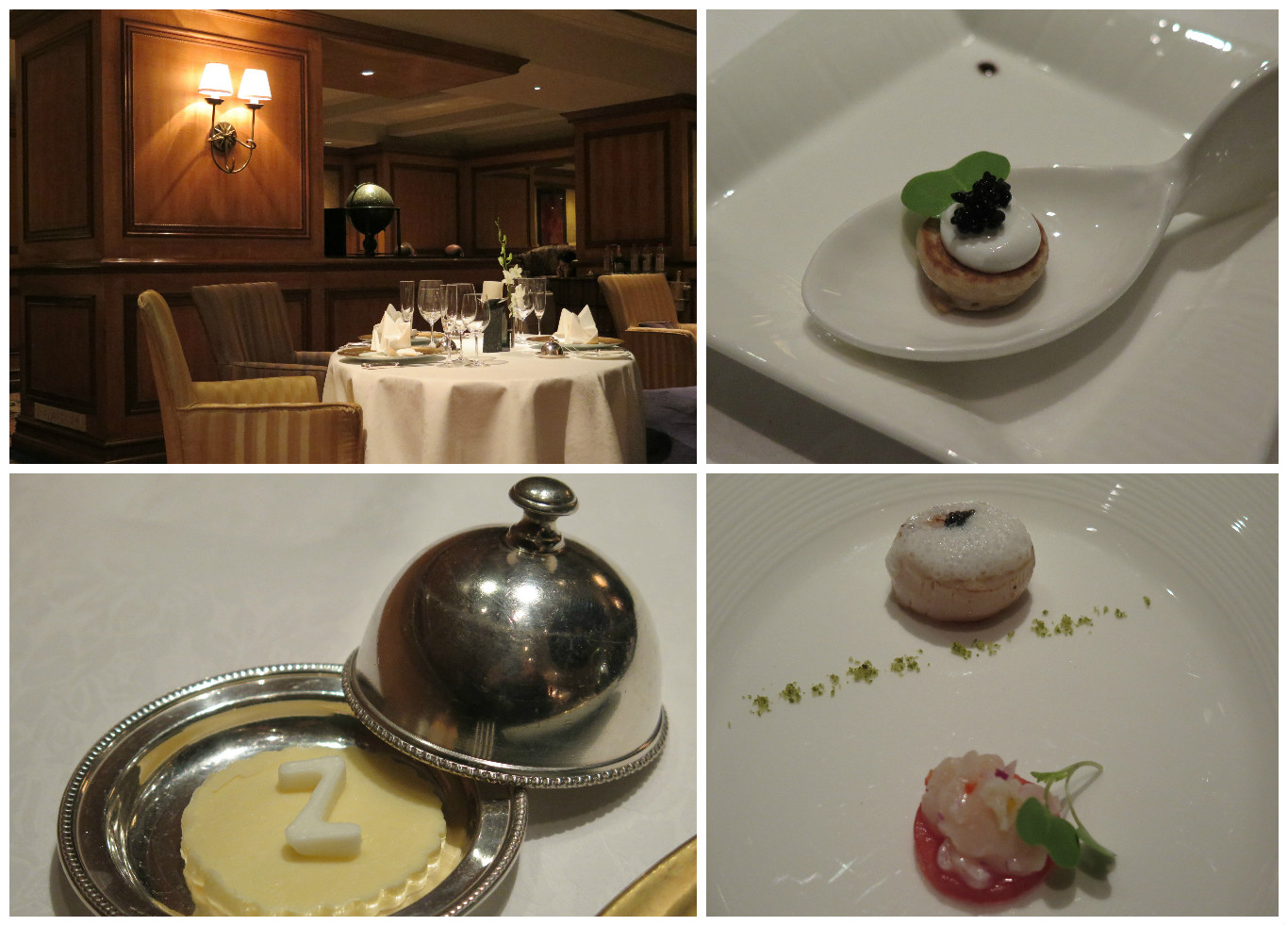 These gripes were mitigated by what immediately followed. A stuffing of crabmeat barely made any memorable case but the prawns, which were rolled around the crab, had a gentle lasting umami resonance which went wonderfully well with the petite bed of consummately seasoned squid ink pasta : protein and carbohydrate were perfectly married by flavour.
Orient Express in Delhi's Taj , which opened six years before its Bombay Taj inspiration, had  and still has a Camembert souffle on its menu - the first such restaurant dish in India. ZG has  sported a similar dish citing it as their signature, which they christened as "Camembert Darioule". Having tasted both versions in the space of two days, I can confidently report that Mumbai is the winner in this face-off (after two months though, Delhi's regally stationary Orient Express will be left with no competitor). The Camember Souffle - or "Darioule" - here is better balanced and agreeably lighter. In Zodiac Grill they actually suggested to me, after I had declined as I ritually do, the pepper-grinder brought table-side by the waiter, that the chef does recommend an annointment with pepper tableside. That addition proved to be a fine counterpoint to the creamy surfeit. The souffle per se was a tres airy concoction reminiscent of an egg white while the sauce around gently reminded one of the fine flavour of yolk - and the whole dish very elegantly recalled the flavour of a delicately pan-fried egg.
The most puzzling aspect of my meal was the service. Orient Express's single table-side host (I hesitate to call him "waiter") was a terrific icon of kingly attention-lavishing and pampering while Zodiac Grill's multiple staff failed to generate similar coddling. I would push my plate away ,beyond the normal reach of my hand with the fork turned downwards and yet several minutes - one one occasion more than ten - would elapse before they noticed that the plate was waiting to be cleared. My bill that night for the seven course degustation plus the separately requested special "coffee" and a cocktail, including tax, exceeded Rs.13,000 - if this doesn't guarantee world-class vigilance I don't know what else will. The staff were all polite and manager Mr.Nishant was particularly generous with his minstering, but additional shortcomings, like a plainly visible smudge on the tablecloth which did not result in the tablecloth being changed (it can be done with minimum fuss with the table never being exposed, by  a trained team) undermined the service standards.
The main course featured a disc of chicken the majority of which was soft but parts of it were distinctly on the chewier side - which simply does not cut it when it comes to a restaurant that positions itself as a top-class culinary destination.  The asparagus on the plate was more tender then that served in Orient express, while the sauce is not something you'll remember the next day. This simplistic dish and its undistiguished taste was the evening's biggest disappointment - in a restaurant of this supposed caliber, I'd expect a chicken main to have nothing less than an ineffable breast with a virtuoso leg parked beside. 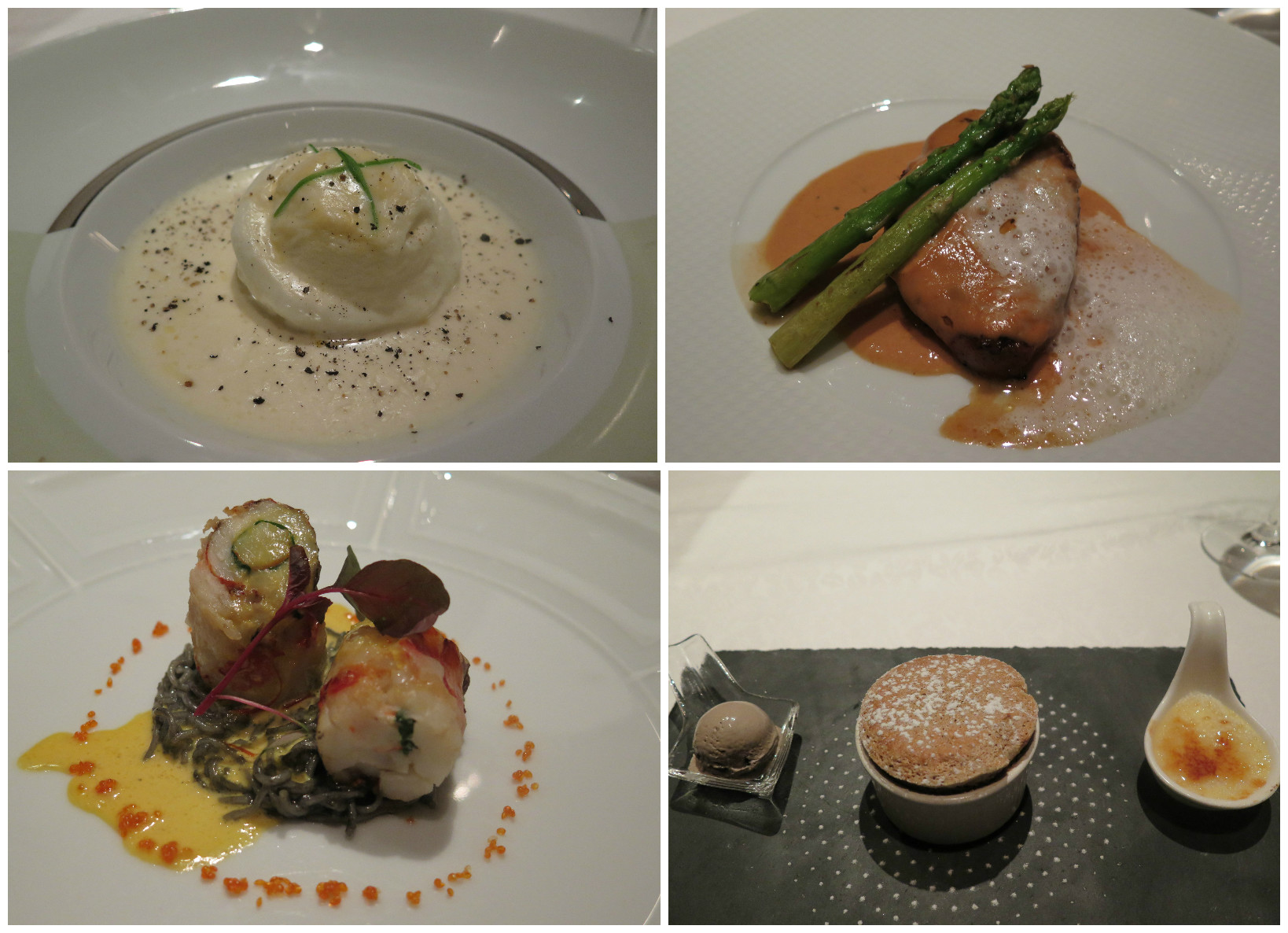 Dessert was also ho-hum -  Robusta souffle had middling flavour, and a lemon and rose creme brulee's flavour had inadequate sparkle. The restaurant's special "coffee", as mentioned before, with its swirling contrasts of black coffee, cream ,orange liqour and whiskey , was a better "dessert".  They served nice chocolate-based petit-fours at the end.
As a student in Mumbai, I had read starry-eyed accounts of this creme de la creme restaurant, but when the years eventually brought me past its portals and through the peaks and plateaus of its putatively pampering process, there is a sense of valency that I find unable to shake-off. Yes this opinion is based only on one visit but I am only an infrequent visitor to India at the time of writing and if you cannot provide a synecdoche of your marvellousness over the course of a multi-course degustation, then please do not expect the patron to show more consideration. That night, the gentlemen running Zodiac Grill did show potential but they were unable to consummate the dream. I know they're closing for good next month, but whatever happened to going out with a bang?
UPN
Rest of Pics from the hotel and restaurant :