Huami : Restaurant Review
3.5 stars out of 5 : Between Good and Excellent.
Auckland , New Zealand
Visited June to August 2018
NOTE : This review is best enjoyed on a desktop or laptop, not a smartphone.
Presented as I + II + III
Looking for the most spectacularly succulent chicken in Auckland ? Your search ends here. Kong Bao Chicken is the true definition of meltingly soft - the plump, preternaturally tender morsels beautifully caramelized in a dried-chill-vinegar sauce. Looking to make a no-carb light meal out of it ? Contrast it with the Quick-fried String Beans which had been wok-taken to the ideal intersection of crisp and soft and flavourful.

To enjoy these perfectly balanced delights , journey to the foot of Auckland's sleek modernistic mountain which is the Skytower, look around the flanking domains and let your eye snag the totally unique entrance touch of red lanterns. Unusual amongst its Chinese brethren in Auckland, the obviously moneyed proprietors of Huami apportion equal space to decor, besides snazzying up this downtown restaurant with smart upmarket styling. A sizeable space facing the main dining area is dedicated to a rock and wood reservoir that houses shelves of ceramic teapots, kettles, bamboo baskets and rows of chopped wood blocks. The entrance has the more commonplace touch of blue tanks holding large crustaceans and a sleek side-showcase of ceramics. Generous dark wood muscles through  the place. The best part is when you head to the powder room and I'm not referring to the little mountains of white folded cotton towels.
The kitchen can often be terrific, but sometimes it seems to be ill-advisedly inspired by the SkyCity casino situated above, and throws the dice with some dishes too wantonly, the diced chicken, seven spice squid and the dumplings particularly suffering. 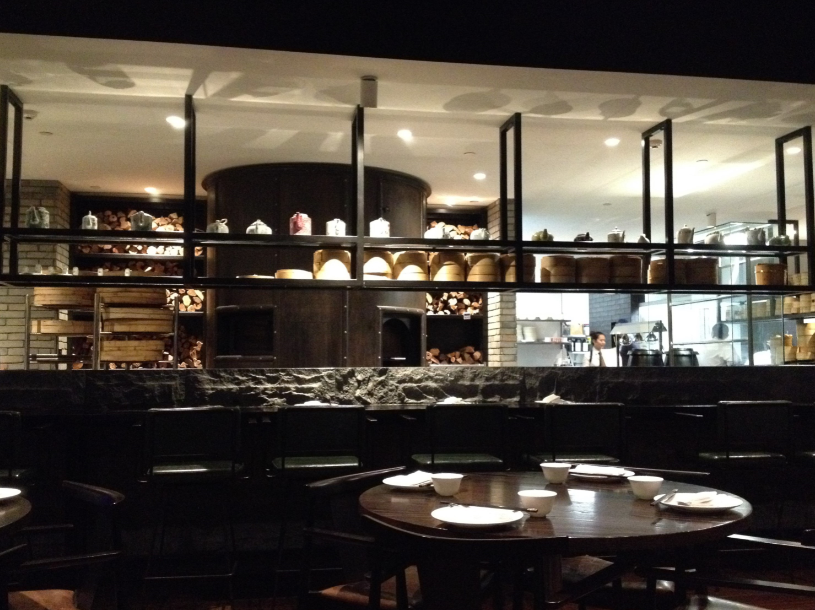 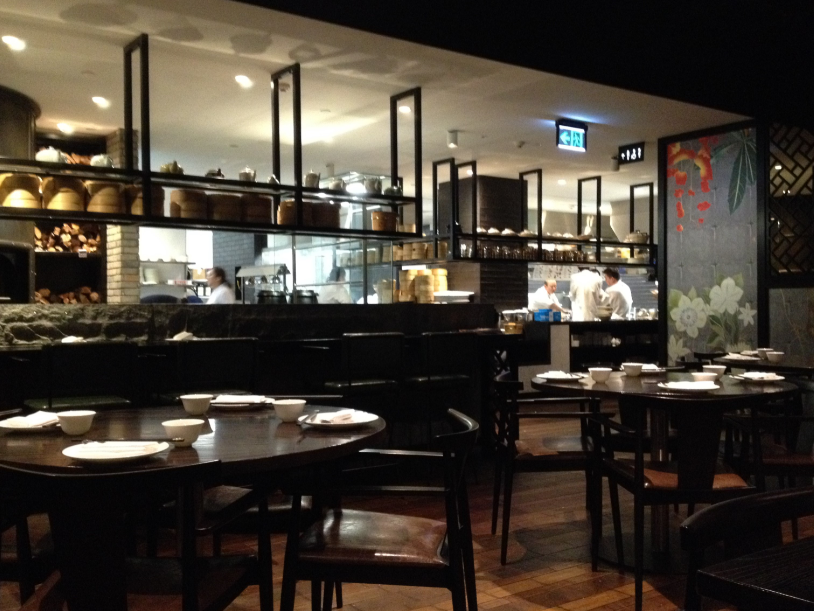 Remarkably and also refreshingly, all the waitstaff over various evenings were female. They are all haunted by the ghost of the male waiter who was never allowed here. That evil phantom yang makes these yin clueless about co-ordination and vigilance. How about pampering ? There is no word for it in Huami. Am I being rude towards these nice lasses ?  How on earth can I especially when they show such strong solidarity with a significant chunk of waitstaff all over town, by making you do a face-palm and eventually jettison any hope of a strong and reliable managerial presence working the room. You place your order with one waitress and another comes asking whether you've done so - it's a nice two-in-one way of meeting Alice-'n'-Amy.  Bonus : if you're too busy chatting , you can count on the staff not to disturbingly remind you to have your main course before the kitchen's closing time (desserts can be ordered till the very end though). 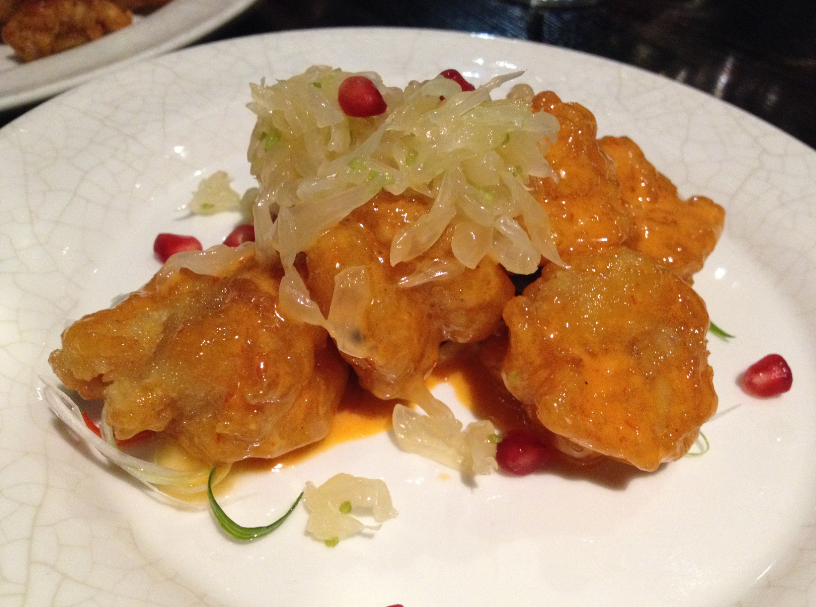 To make up, order the Crispy Tabasco Prawns with pomelo salsa which is amongst their finest appetizers , appearing as chunky orange jewels from the sea. They are plump, succulent, caramelized crisp and bathed in a lip-smacking sauce of spicy, sweet and tart notes.  Deflating that high is the diced deep-fried chicken, cooked in a mediocre cornflour coating, the meat like processed pieces, only partially salvaged by the multifariously intense flavours, Indo-Chinese style, of a coriander chilli sauce. Disappointment escalated with seven spice fried squid - again that listless cornflour batter showed up, the squid chewy and muted.

Crave a rip-off ? The Special Dim Sum Platter is priced at $20 - the menu does not tell you clearly that there are only four medium size dumplings offered ! (nevermind if these are four different varieties). So many places all over town with comparable price points would offer double the quantity at least. There were three of us and the thought of placing a second order of the same to sample each piece, seemed a nice way to encourage their extortion of this item ; so that plan was crimped in the bud.
In fact, dumplings are their weakest section. Saffron dumpling with vegetables had phantom flavour, the dumpling skin on the chewier side. Crab and Spinach versions were let down by flavourless bits of crab cut down to nothingness, with too much spinach. But I rather enjoyed the fried unctuousness of the Wafer paper roll with Shrimp and Avocado, even though a bit of oily aftertaste undercut its crunchy coating and liberal swathes of shrimp. 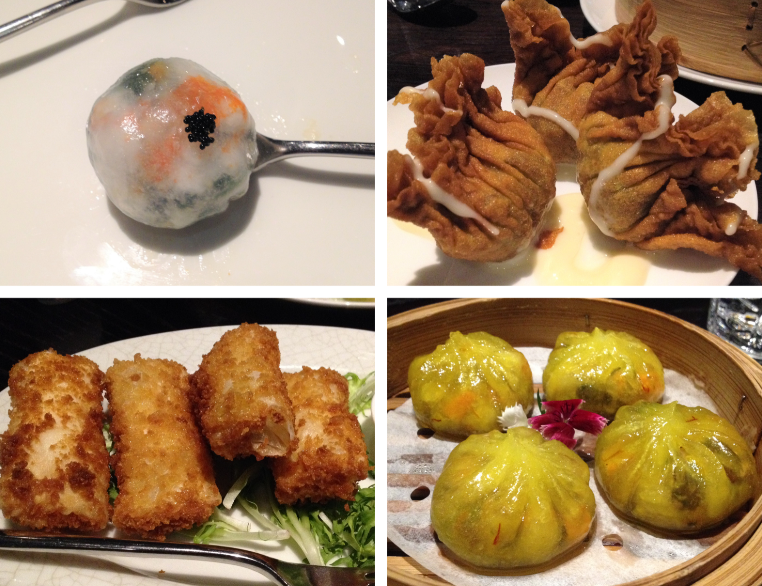 Huami is unafraid to present bold Asian flavours in desserts. The best example of this is black sesame parfait (a cross between ice cream and cake) and durian ice cream. Leanly spicy perfume of candied black sesame is beautifully channelled into a chilled soft cylinder and a sesame tuile is the textural screen that separates the other component.There's no odour, you only get some echoes of the notorious stinkiness when you taste the cool sweet ice cream that is neverthless an audaciously successful addition to the dish.  Their mango pudding presentation is sexy and glamorous, with a restrained taste of mango but the real potential of the dish is unleashed with when you taste all the components including pomelo "drops" and the kaffir lime ice-cream together in a single spoonful that yields rainbow sparkles of perfumed joy. More pleasure : Jasmine mousse discloses exquisite essence of the said flavour - the second time it was ordered their creativity and technical finesse multiplied by encasing the mousse in a sphere and zestfully contrasting it with orange segments and matcha crumble, complete with an inveigling jasmine ice-cream by the side. 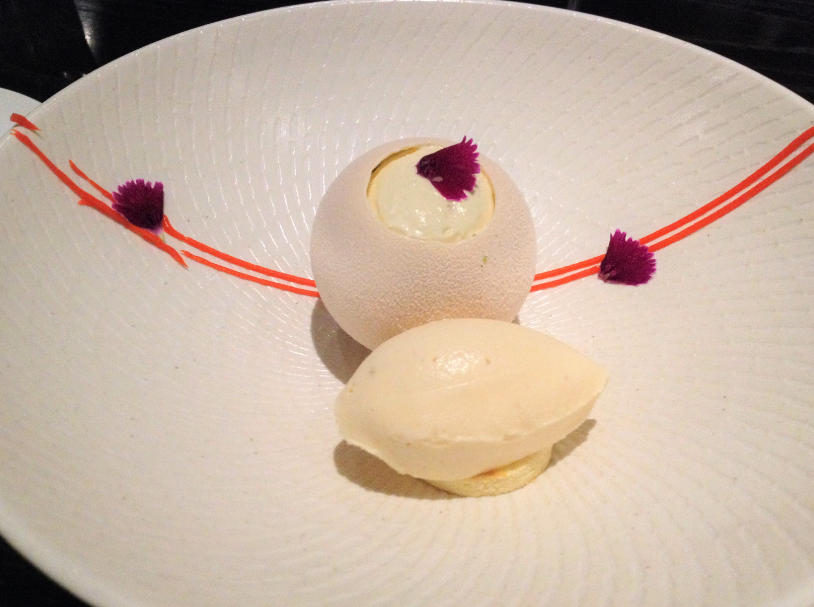 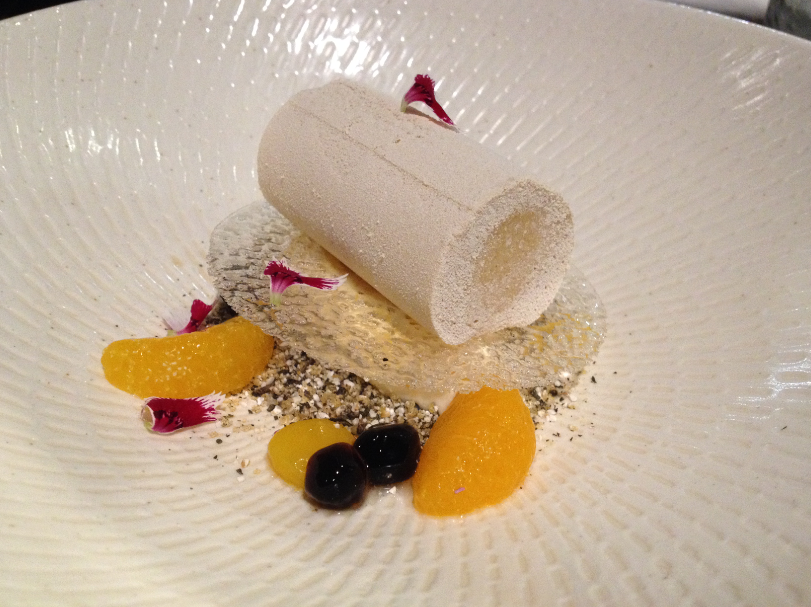 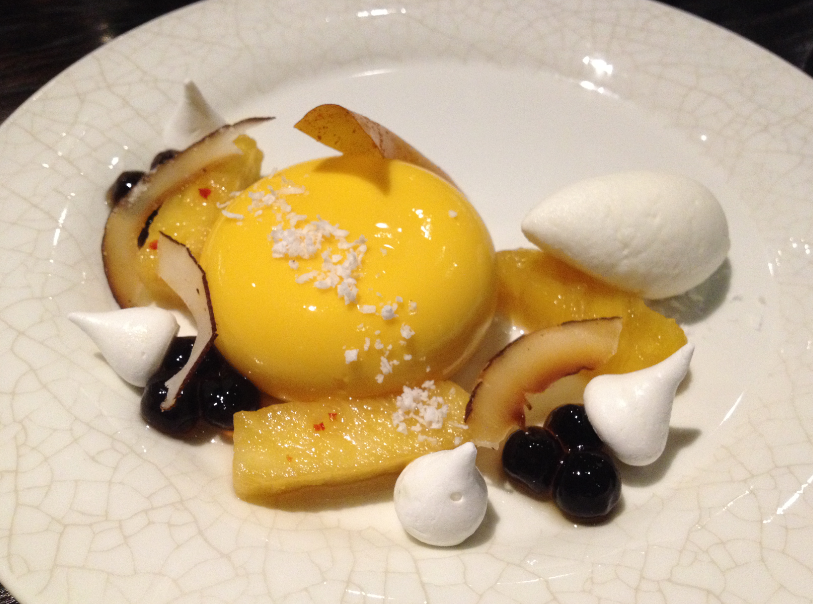 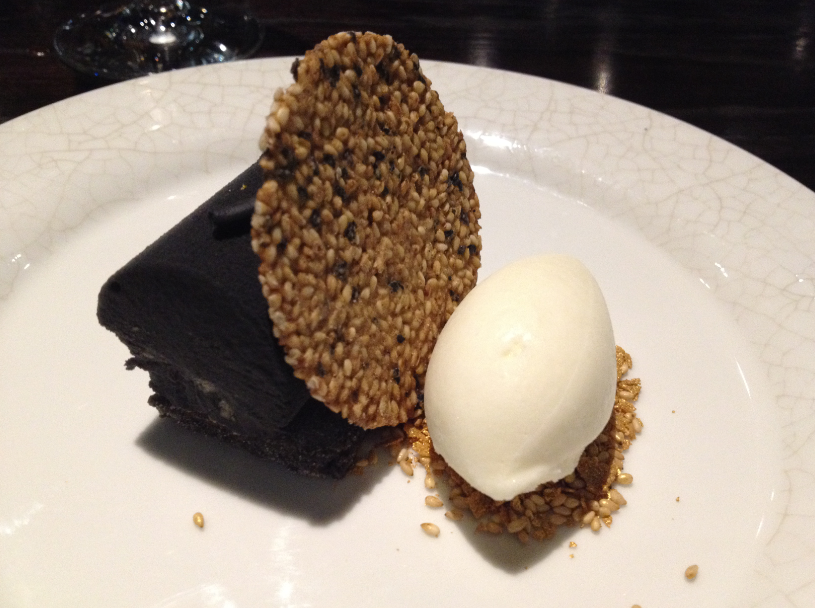 II
Subsequent visits however showed the savouries in a much better light. Deep Fried u10 Prawns with Sweet and Sour Sauce ($ 42) stood out as another premium seafood starter with fresh lusciously succulent prawns, despite the overly sweet sauce that swamped them. Sexy presentation graced the other appetizer in which a black sea of spicy chilli oil was the wicked base on which a small battalion of boiled chicken slabs rested with their golden skin on. Raining spicy slicks from the top was a thick black bean sauce. The chicken was soft but was a touch dry and slightly stringy, the admittedly bold, handsome dish trapped in old world cooking whereas a modern chef would hedge the plate with some refreshing contrasts which would be better than just a drizzle of brunoised scallion.

Crisp Duck Wonton seems an unlikely winner on the menu, but it was a knock-out dish nonetheless, powered by rich, fatty and dulcet finely chopped duck caramelized to marvellous intensity. "Wok-fried King Crab with spicy butter sauce" ($88)  was delicious with a smacking good sauce that absorbed the wonderful sweet marine magic of good crab. Presented in shell that had been thoughtfully half-split for your convenience, the meat within while not reaching the level of transcendent crab was still pleasantly flavourful.
Some of Huami's finest joys don't come from the food. There is a gorgeous "gold room" inside, the luxurious wallpaper and a large rather chunky crystal chandelier buffing up the compact room, the table settings more modest but still very elegant. This six-seater private room can be yours for the whole night for a minimum spend of NZD $1000. On the other side is a dark barely lit tantalizing space - riveting for us, a nightmare for the ducks. About sixty of them are strung up, and next to their mausoleum is a spot-lit chopping block of glowing wood , crowned by a cleaver's tip knifed into the centre. 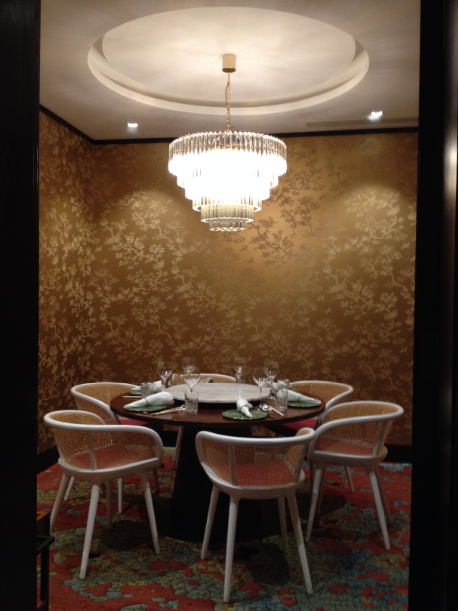 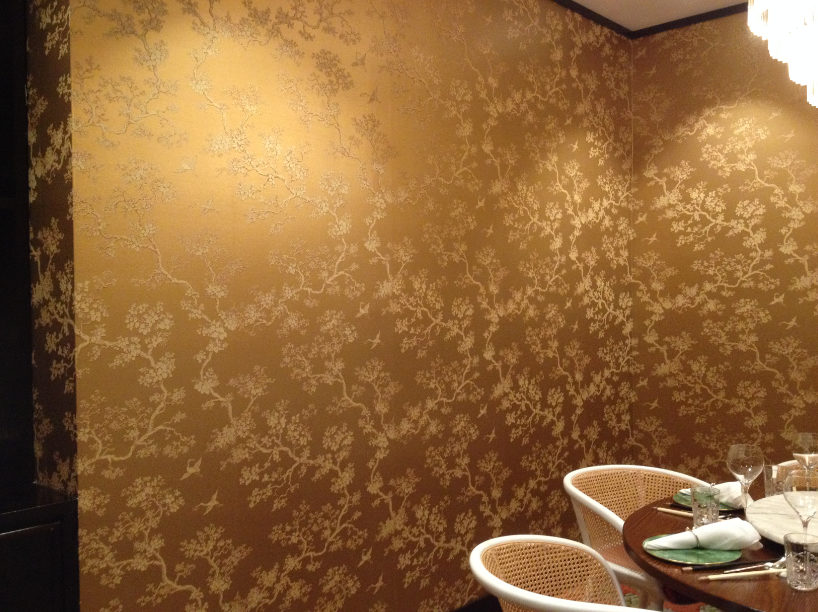 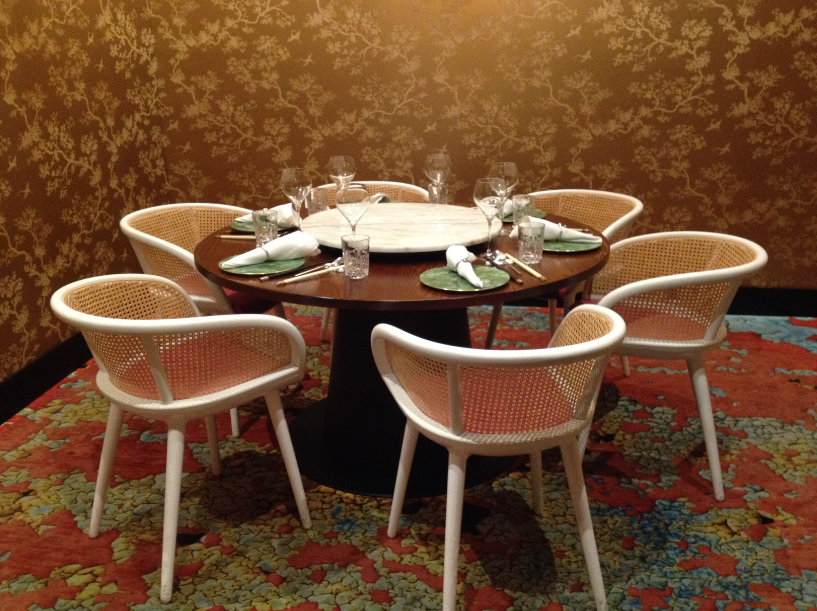 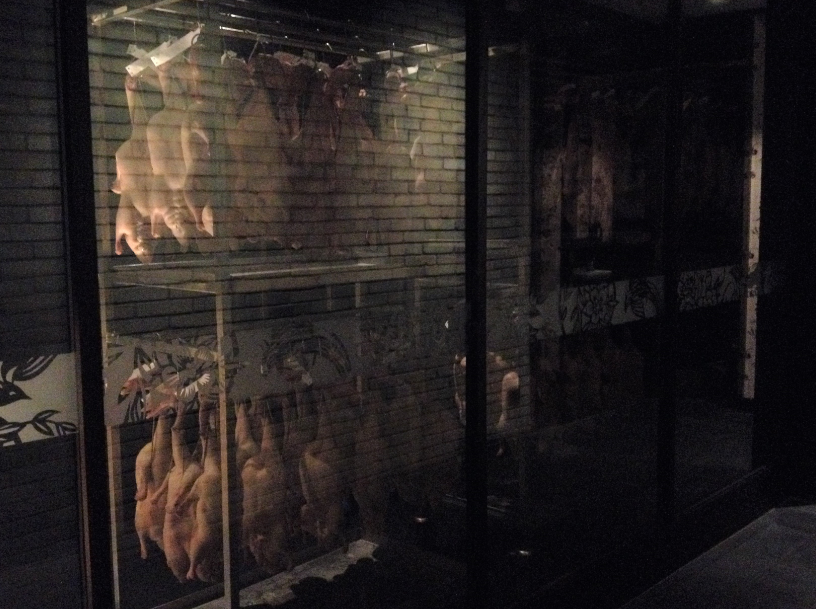 That duck is not always given top homage by the kitchen. Claypot Duck with chestnut and black bean sauce ($36) sported soft meat with a decently judged sauce, alas the meat's texture and flavour were undercut by cutting it into small chunks which, to boot, were a touch dry.
In the mood for some fine carbs ? Braised ee fu noodle with crab meat and vegetable ($26)  may be a refreshing idea, one that the Indian-Chinese Hakka noddle disasters can learn from. The noodle is thick but softly spongy, slickly moist yet with a nice wheaty touch - an enjoyable departure from routine noodles, further enhanced by a mild crab broth and subtle textural contributions from finely chopped vegetables.
III
Out last visit scored a flawless array of hits.  Soft shell crab ($26) was tender and fresh, fried in a very fine panko coating and it was launched into the haunting empyrean by a topping of oatmeal and crispy egg yolk that sported smouldering umami. Pair this magical dish with the tabasco prawns and you have an appetizer duo that has very few rivals in Auckland. 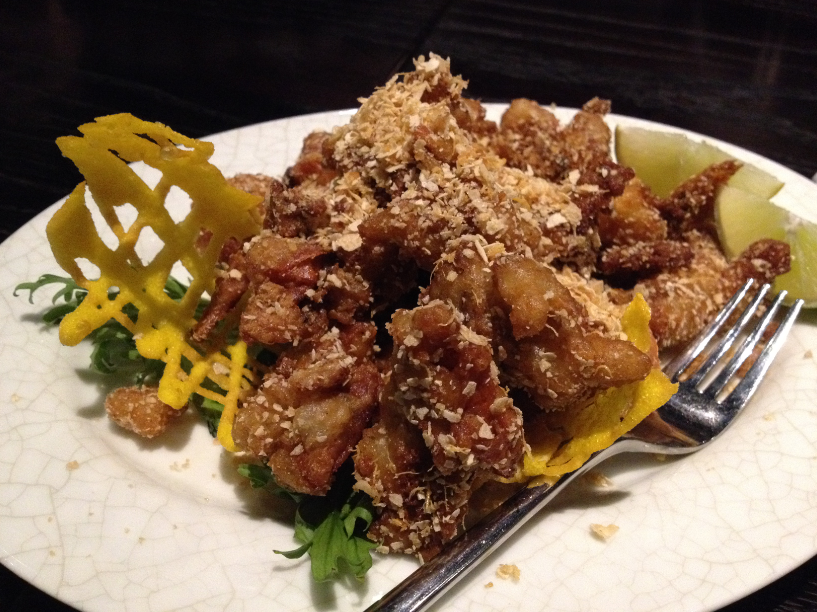 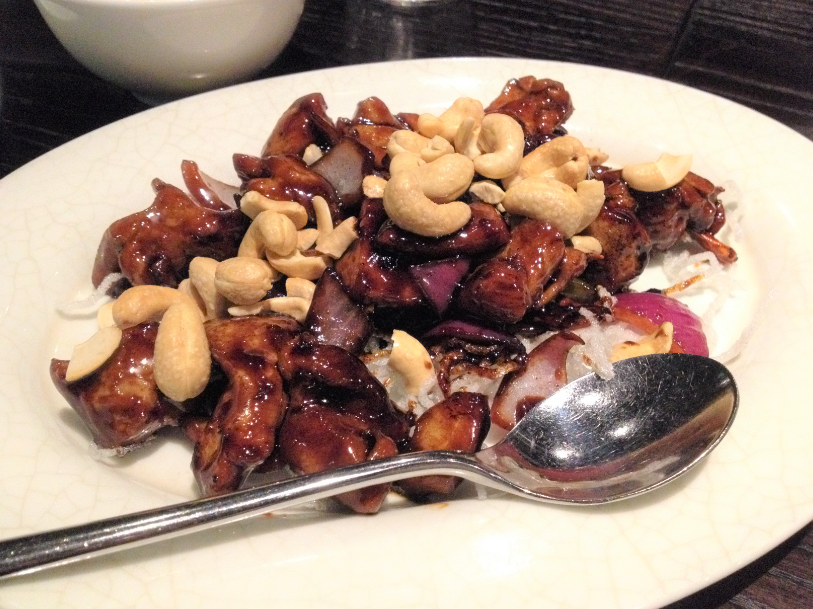 That spellbinding chicken elucidated in the first paragraph came at the fag end of my fourth meal in Huami. Like those select seafood appetizers, it underscored the kitchen's lurking potential to fish for top-tier ingredients and transport them with unerring flavour blends. Auckland may not have places like Melbourne's luxury Chinese formal-dining "Flower Drum" but teams like the one behind Huami have enough steam in them to achieve such goals if they set their mind to it.
UPN
UPNWORLD welcomes your comments.