Kerala cuisine is in a genre of its own, different in instinct and style from the rest of the South Indian pantheon. Rice is par-boiled and plump, thick gravies are needed to match it, coconut oil is used with polarizing gusto ,there are many delightful vegetable stir-fries, while responsible hands can elevate fish to ethereal heights. I received news from my agents that a self-christened "South Indian" restaurant by the name of Kairali, was giving a fair account of itself in Royal Oak, Auckland. Further good news- Malayalis had not flayed it, the restaurant had been praised by NZ Herald's Peter Calder, and in any case, the Kerala sympathizer in me was stoked to the point of exploring one of the very few Malayali restaurants in the whole of New Zealand.

We started our batting with Chicken 65 - A decent contender for a score for 65/100, these were neither soft nor too chewy, with a pleasantly rowdy masala . Hard-bitten Connoiseurs like me would have preferred a dish like this to be served with a stiff dose of Romanov Vodka or XXX Khoday's rum (reminds me of college days but I'll stay in the present,thanks). Recommended pairing -Rablet before, Gelusil after. I took the last of these heftily portioned morsels, parked it on a lettuce leaf, topped it with a shimmering slice of tomato avec sprinkles de onion, held off the cream and eased it into where it deserved to go. It tasted quite close to a Kerala-Kiwi 50-50 Chicken.

Kerala-style prawns - I don't recollect Malayalis giving TLC to prawns- the state does not show much spine in cooking these marine invertebrates. There's that show where Anthony Bourdain is flummoxed when he visits this state for a chow fest and his host quotes the length of time for which they cook mussels. Anyway,the prawns here sported textural zing coupled with a pepper kick & ginger-garlic touches. But depth of flavour was lost in transition from sea to plate, so the kitchen ended up capturing the pizzaz of prawns but not their soul.

Rice was fragrant, evanescing in the mouth on its own without any curry, after just a few rounds of chewing.

Egg masala lost its mojo and arrived on the table too sweet - not a patch on The Indian Egg Curry which is one of the world's greatest meditations on the said genre.

Appams were passable- they will have to be made with a niftier hand if they are to hold up to expected standards.

Appetizer on the Wall - Though I appreciate the unique creature that Aishwarya Rai is ,I never had the hots for her. On the night of our first visit, the plasma TV on the wall was loaded with a DVD that was suffused with her music videos.It played at least a dozen beautiful songs showing her in a hundred different expressions and moods ,and I may admit here that she sort of grew on me (but in the song "Mera dil tera deewana" Suman Ranganathan beat the pants off her)

Ambience - Easily recognizable as a standard Kerala-"hotel", but the overseas location ensures and obligates a nominal presentability .Mauve-washed walls, chairs and table of polished light brown wood and white-tiled floors form the basic model. The billing counter features a decent alcohol cabinet.The back wall is mounted with an archetypal tableaux of mordantly coloured food, while the wall next to the restroom sports a portrait of Our Lady of Old Travancore- curvaceous, in traditional attire, the entire get-up inspiring neither lust nor total disregard.

Fried fish, whether it is served with chips or any other abomination, does not belong to Britain,NZ or Oz. It finds its ultimate glory in the back-waters and catamaran-fronted seas of God's own country. Here, robust spicing somehow co-flourishes with deep marine essence. For Coastal stalwarts like me, a fine fish fry approximates the soul-stoking satisfaction that a good steak heralds for a Yankee. Be it Varaal, Sardine,Tuna or Karimeen, Kerala fishes out fantastic flavours from its frying pans. With this modest level of expectations, we ordered this torched piece of heartland in Kairali. On first visit,they said they'd ran out of Fish Fry and I ran out to check the sign that this was indeed a Kerala restarant, but our second visit granted more supplies. The order when it arrived, made my erect camera retreat into where it came from. The fillet's exterior was dark and unappetizing. Even an advanced fish-frying creature like a Malayali chef has to ensure moistness of meat -this was in short supply in our over-fried specimen that recalled a tired overworked boat rather than its fresh flavorsome bounty. Had I been given this passable offering paired with dark red-flecked plump par-boiled rice with a sauce of thick sambhar along with a side-order of mesmerizing Kerala-style cabbage stir-fry,I'd have happily used my palm and fingers to bolt this meal down like Ammay's boy. So Team India goes out to bat, and Sachin Tendulkar fails. As our current cricket team can do well even without Sachin Tendulkar, we resurrected our hopes for the rest of the meal.

Fish masala - first bite - I felt its spiciness rising like a rearing stallion, given a sideward tug by expert application of tamarind, while creamy coconut barely held that fiery kick in check. Some kind of flames are better left almost unchecked and this curry carried that type of happy flickering conflagaration initially. Subsequent tastings from the same plate failed to capture the initial supreme feeling. Coconut was countering the chilli too much, instead of giving a jab and calmly accepting a knock-out blow.

After the first visit I concluded that this joint offered spanking good value for money. Some key items had not yet been tasted, therefore a subsequent visit was plotted.

Patrons - Two NZ Lolitas, a putative Humbert (to be fair, he didn't really look the part) with his Indian pal, two couples who looked North Indian, comprised some of the customers I glimpsed on the second visit. At the height of that night's tharakkam, 6 tables were occupied. The 2 chefs in the kitchen were evidently working away furiously while our server was a busy swarthy bespectacled boy who had Kerala written all over his face. But cultural dyslexia afflicted me after that incident of mangled borders re:Chettinad chick; he might as well have been a Tamil cherukkan for all I knew. But he confirmed on asking that he was indeed from the Naad not Nadu, and also revealed that he had been given charge of cooking the "breads" to order!

Biryani - The rice was not adequately smooth (callow-tasters and connoisseurs alike respond to the "buttery rice effect" in a biryani when their mouths and gullets are fortunate enough to encounter it) and though the embedded masala revealed evidence of true Malayali soul, it nevertheless fell short of being fully developed. In a stellar Kerala biryani, the chicken, still on the bone, can be a masterpiece of marination, its tenderness amplified by a quiet acceptance of the masalas in the cooking pot, while soft plump grains of rice smoulder with carnal scents topped off by a petite crown of fried onions. Here pieces of chicken 65 instead were added, and there were 4 decently portioned pieces of it. Taste and fragrance were further enhanced by cashews raisins clove and cardamom but the overall master touch was missing.

Chicken Chettinad - Superior knowledge of geography informed me that Chettinad belongs to Tamil Nadu,but one can't let centuries of petty divisivism come in the way of united South Indian rapture. So when we ordered Chicken Chettinad (notwithstanding the fact that authentic Chettinad food is not necessarily spicy), we only lusted for the killer kick of a lungi-clad South Indian hero. When the dish was brought, the colour was a creamy light-brown and on tasting it, we realized that we hadn't counted on the inclusive fervour of these coastal kitchen boys who'd apparently dragged Chettinad across the border and anointed it with coconut oil and tamarind. Sharp smoke and blended magnificence were missing, but the piquancy mollified me. I ended up tasting it too much, and even ordered an extra freshly roasted Parotta to mop up the gravy, which eventually triggered reflux symptoms. It subsided later without Gaviscon.

My friend, a Kannada-Telugu hybrid ,was bothered by the ubiquitous use of coconut oil (in this dislike he is joined by hordes of North Indian brethren and a good chunk of Southern sisters). I spent 7 years in Kerala and even in the beginning of that epoch, coconut oil never bothered me- I even apply it to my hair, albeit a jasmine-scented version of it.

By the meal end, my fantasies of a thumping good Kerala meal stood separate from the rigours of my actual experience here. The second leg of my repast cost 6 times what a similar dish-constellation in a good restaurant in Kottayam would have totalled ,and the flavours were not as good. Though not depressing, the meal did not evoke the deep tides and sultry seductiveness of the old country.....which remained a place enlivened only by unfaded memories. 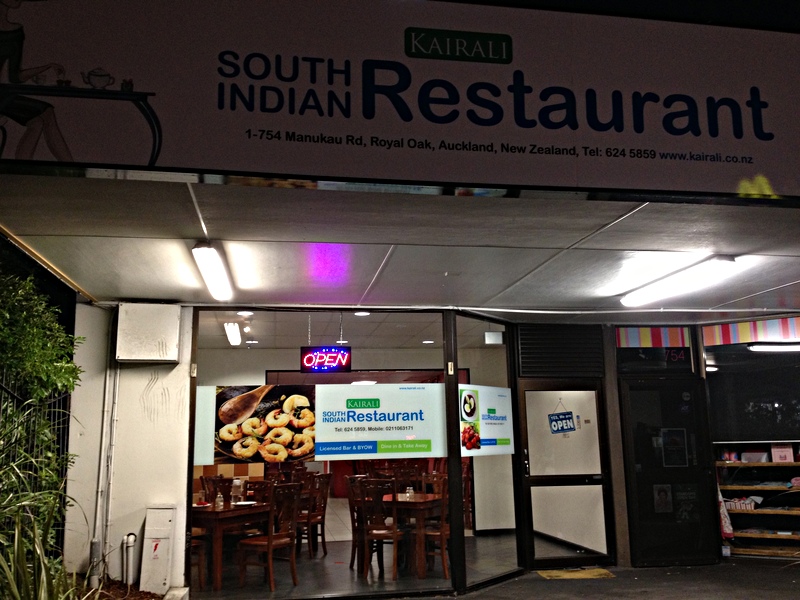 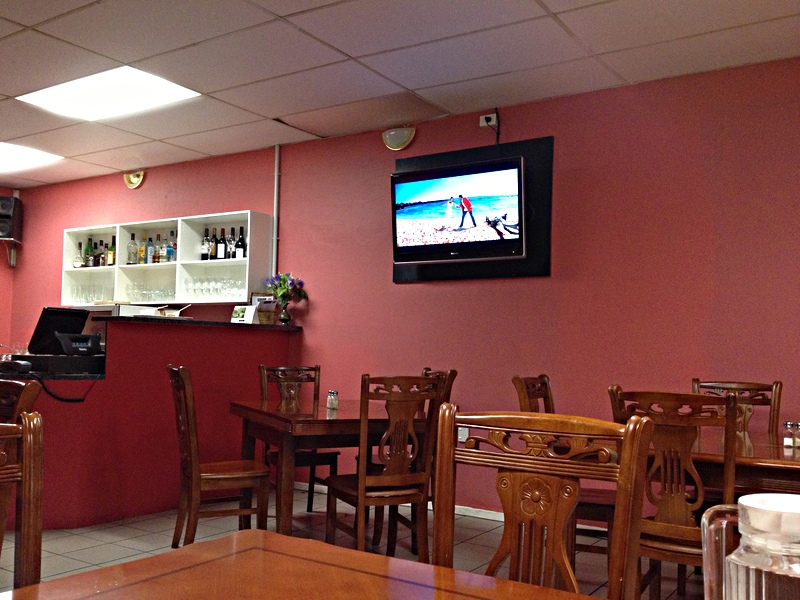 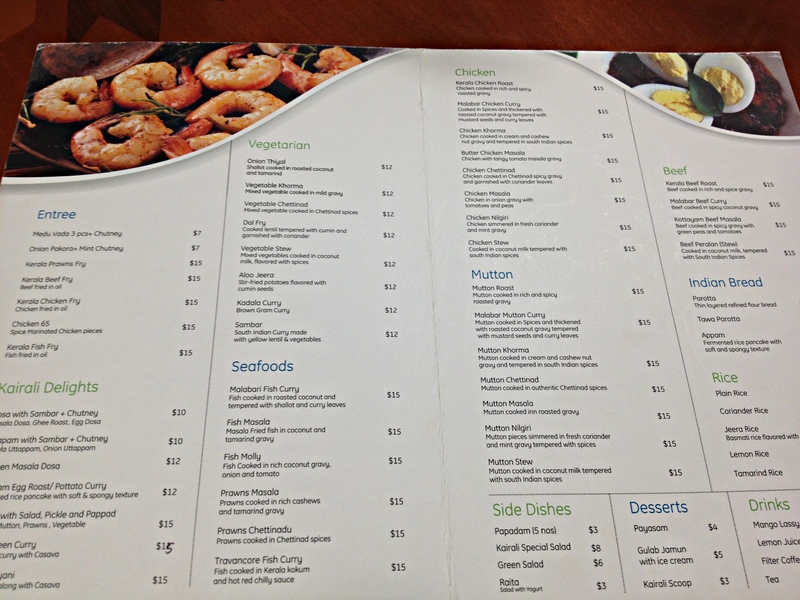 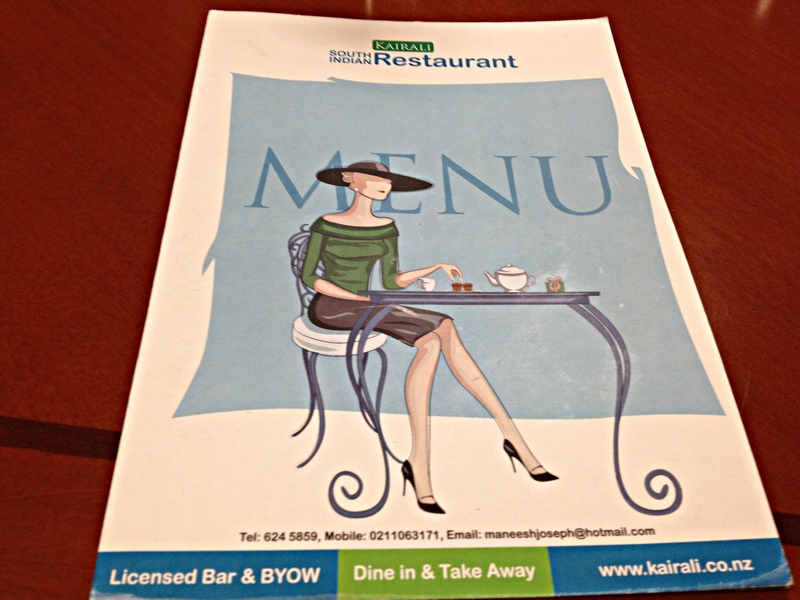 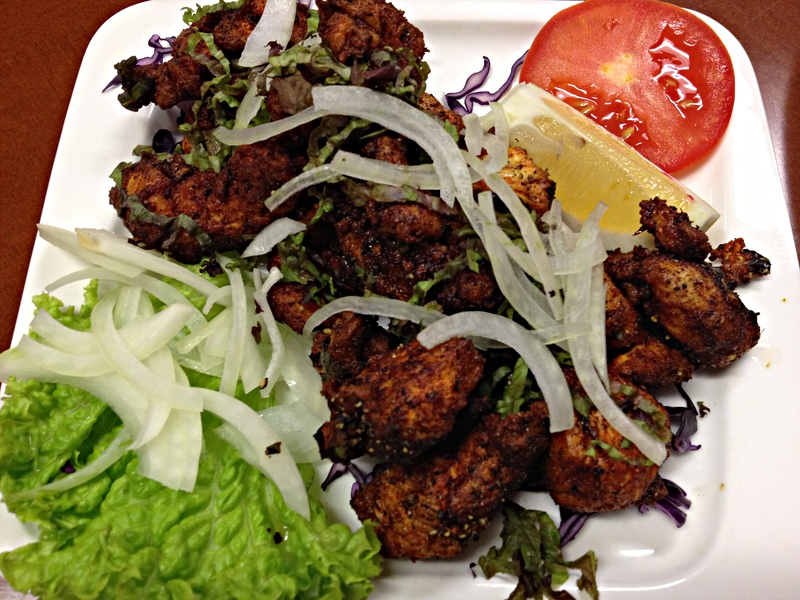 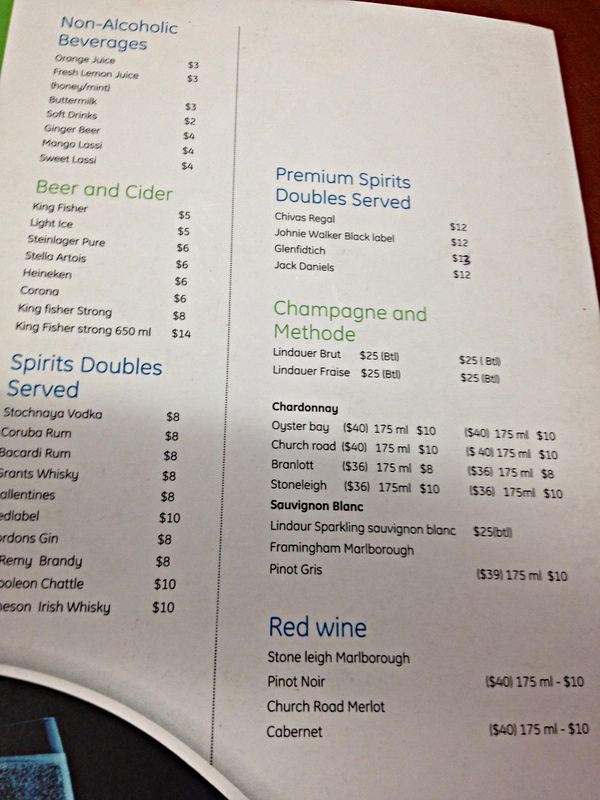 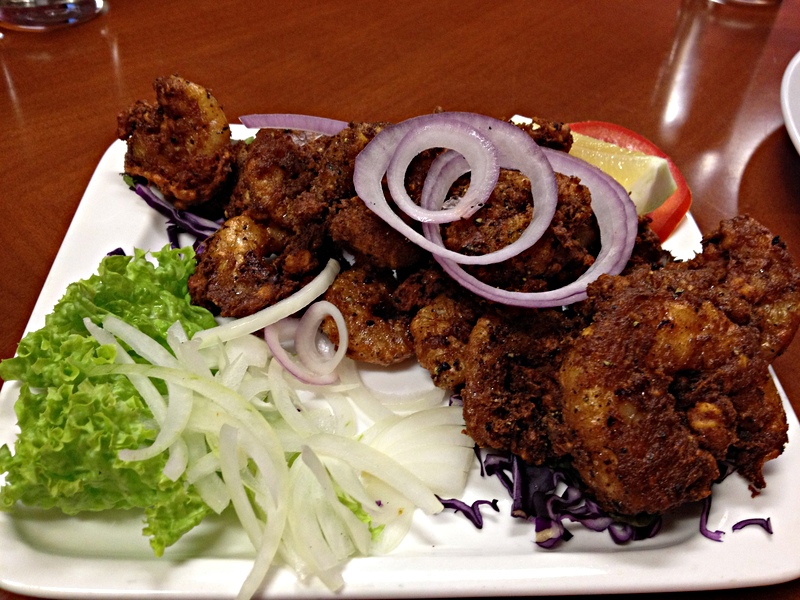 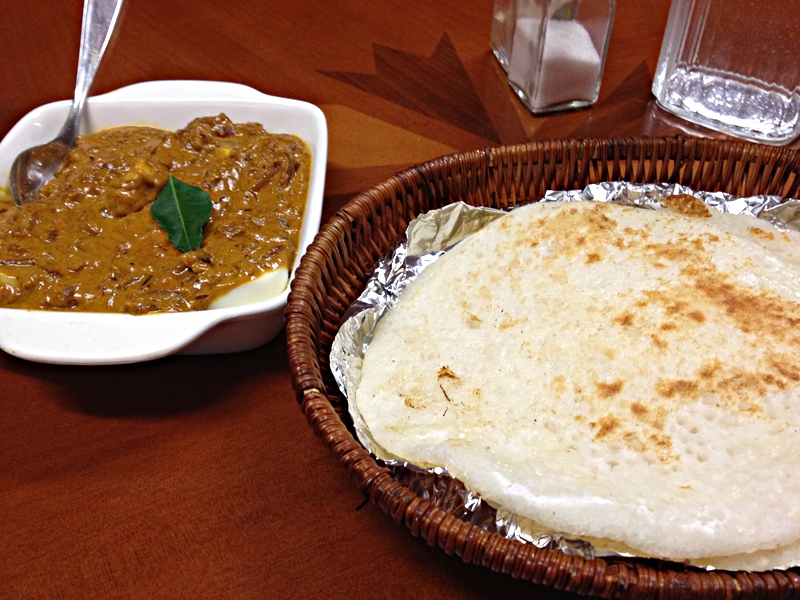 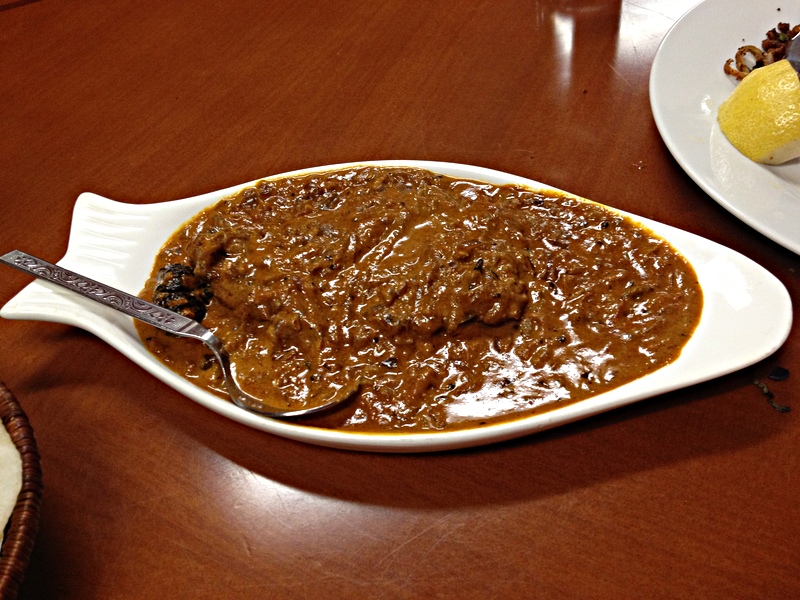 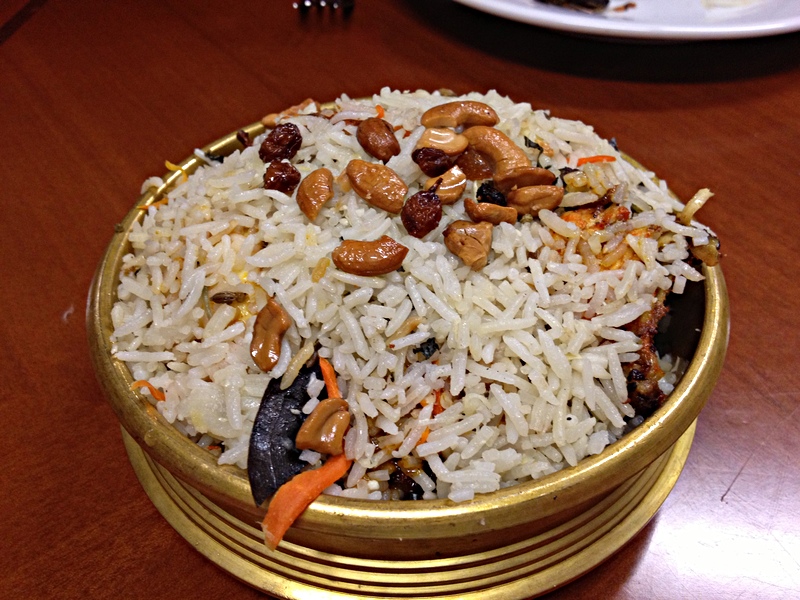 And on a feebly related note...

Couldn't resist posting this photo - A restaurant in Wellington, NZ 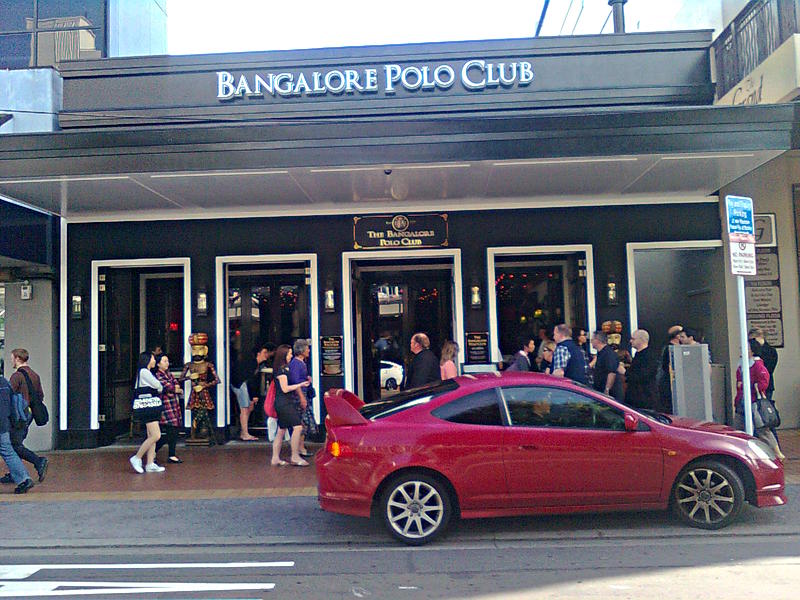