Grasshopper : Restaurant Review
Rating : 3 stars out of 5 (Good)
Visited in October 2015
Bangalore, India
Grasshopper restaurant in Bangalore has been doing for fourteen years what no other restaurant in Bangalore has dared to do - present a degustation meal with no a la carte choices. Chef Himanshu Dhimri and his wife Sonali Dhimri operate their restaurant in a farmhouse-like property in a peripheral part of Bangalore better known for its proximity to the zoo, and in an area that is yet to show good urban development (even the busiest parts of central Bangalore are barbarian miles away from real civic development). My dining companion was Mr.Suresh Hinduja  - restaurant critic of The Times of India - and the most sought-after restaurant personality in the state at the time of writing. We opted for a long leisurely multi-course degustation offering the very best that Grasshopper could offer.
Grasshopper does not do lunch on weekdays which is why our weekday event was illuminated by night. When is the last time you have heard your fellow diner shrieking with pleasure? If you leave out the last two words , I did on this night when a young lady next to our table climaxed her vocal cords not courtesy the chef, not due to her co-diners , and certainly not as a reaction  to the waiters (this place does not have topless service staff anyway) but because the friendly restaurant dog leapt onto her lap. 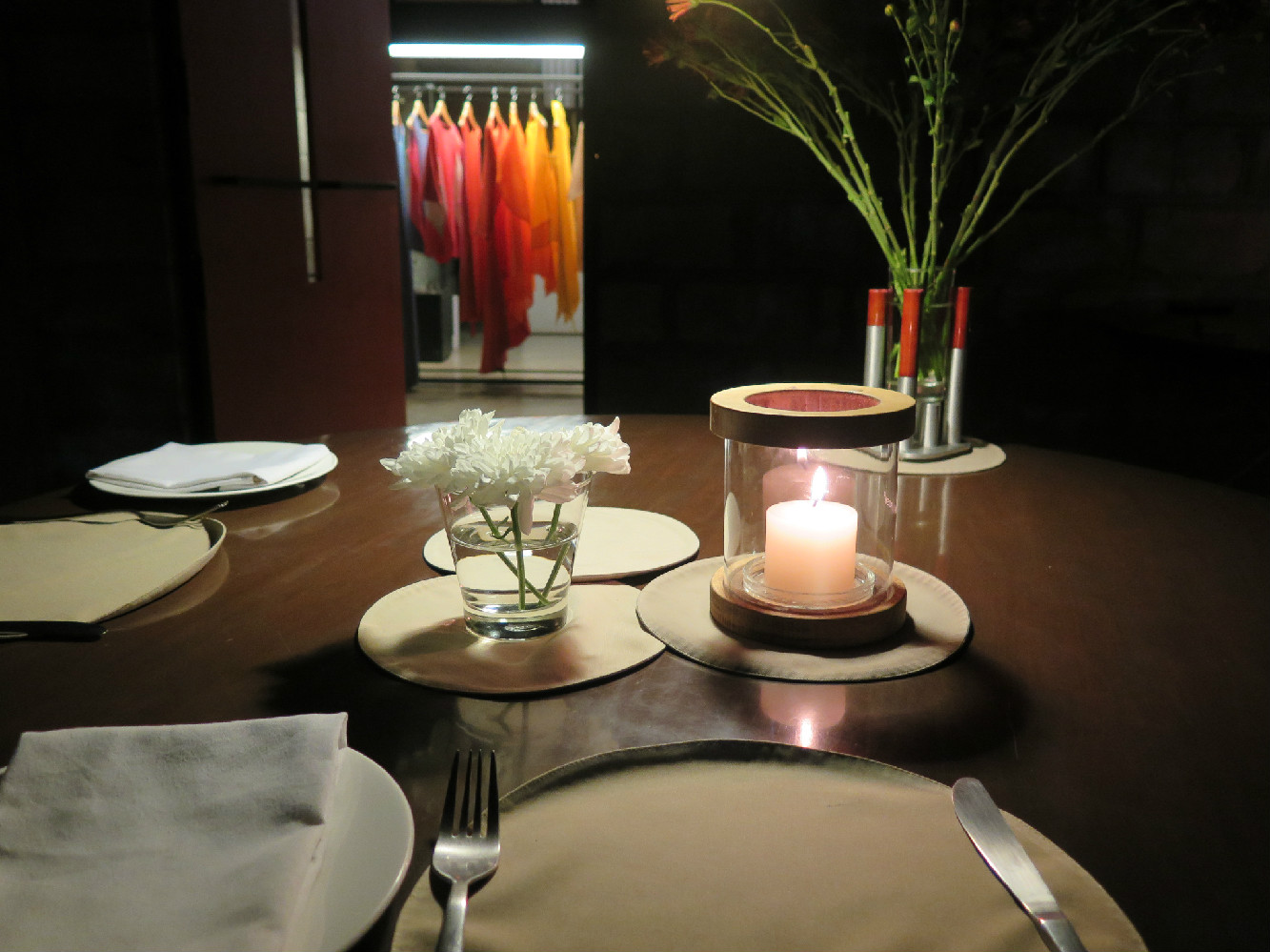 I am not an admirer of chicken liver pate , but Chef Dhimri had accomplished a texturally faultless pate excellently cut by caramelized onion and tart scintillas of capers - it was a beautiful opening example of flavour calibration, and an auspicious start to our meal  (the dog instinctively knew that it should leave us alone). 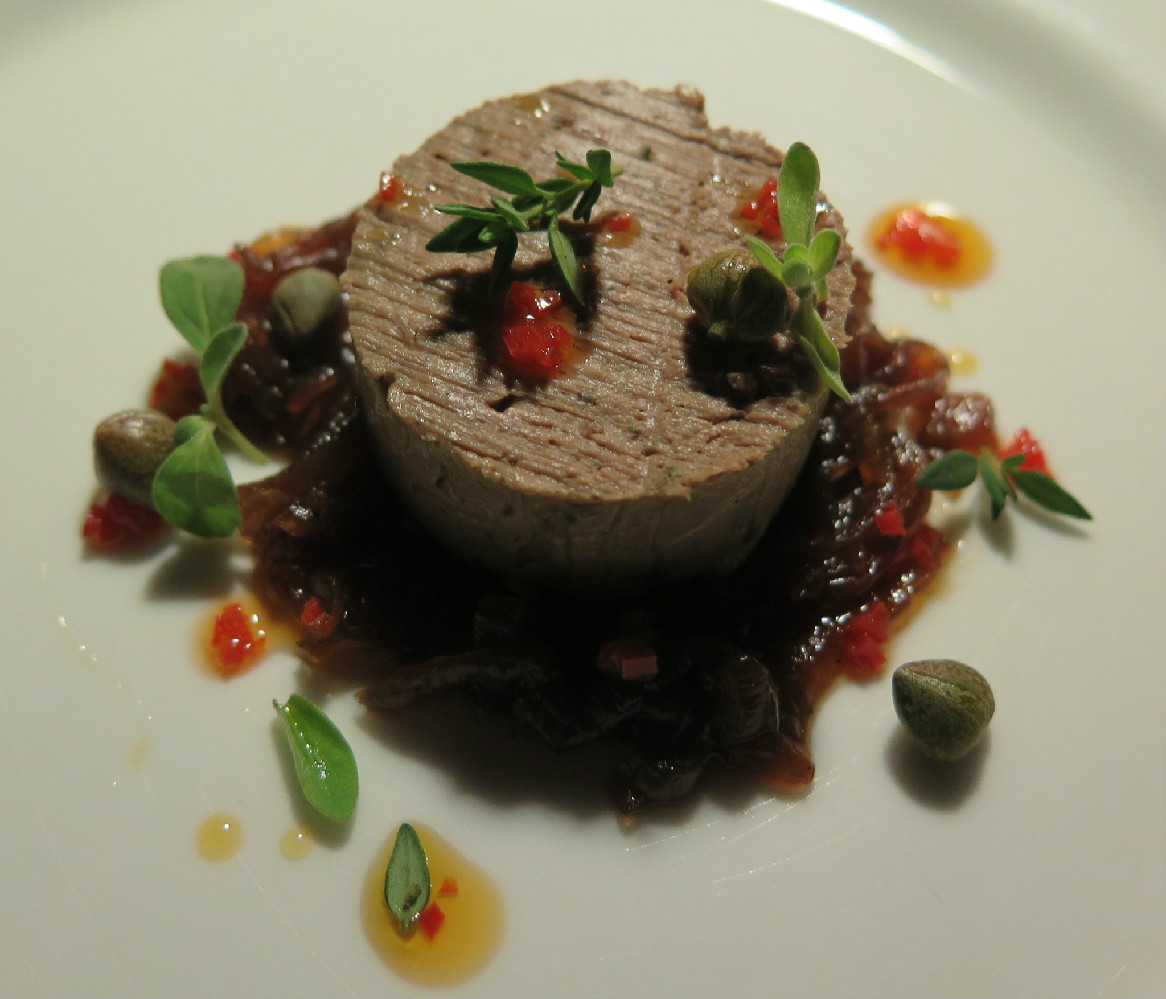 Thin slivers of asparagus yielded very easily to the bite - just like the versions tasted two weeks ago in Caperberry - but neither these nor Caperberry's had that crucial dimension of extra thickness that can really bring out the tres tender slightly crunchy totally wonderful soul of asparagus. Even more fetching would have the been the feat of contrasting it with something that would intensify the vegetable's fresh essence - like how  Flower Drum does by pairing asparagus with superb pearl meat ,but here there was no such value-enhancing companion. I was surprised that Chef Dhimri could condescend to present us with a crostini for  the next course - sure it was a moreish morsel with chopped zucchini, basil pesto and feta but this , eventually, is bar food which has no business being in an ambitious fine-dining establishment.

From aeons , Grasshopper has been presenting beetroot with blue cheese - and this de rigeuer dish was also given to us. Pinenuts are added for crunch , and the overall flavour blend is interesting without being memorable - I was mainly interested in seeing whether the beetroot had remarkable flavour, which it did not have. Disappointment intensified with a prettily composed diagonal lay-out of salad. Its elegant esthetics were not matched by underwhelming  contrasts of grapefruit, lettuce, nuts and a tart dressing. Two plump prawns - looking palely gorgeous - had ginger, seasame and seaweed plainly evident on the tasting as per the chef's intention but unwittingly the prawns' intrinsic taste did not manifest. This long procession of average flavours had begun to take its toll on my peace of mind. 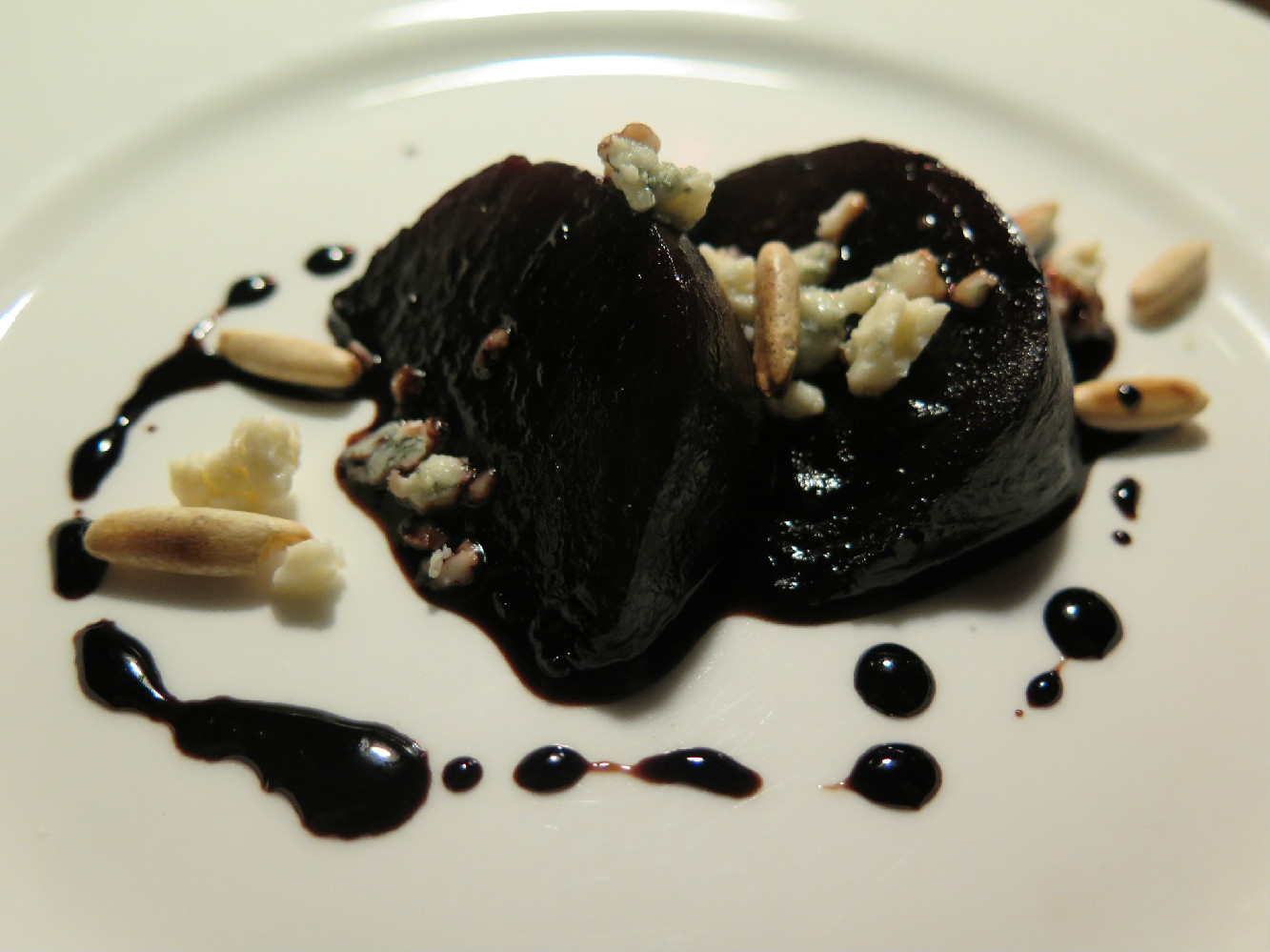 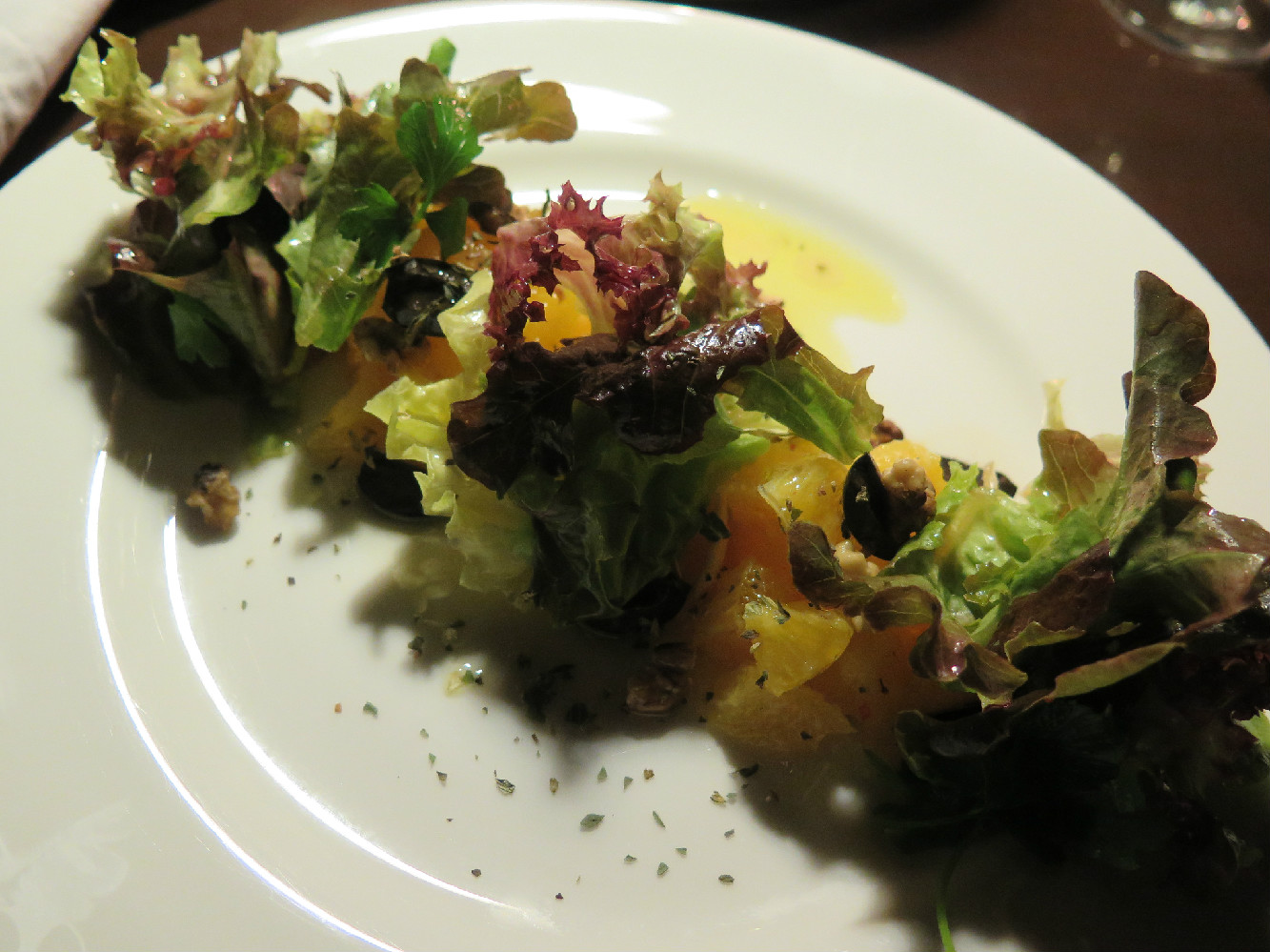 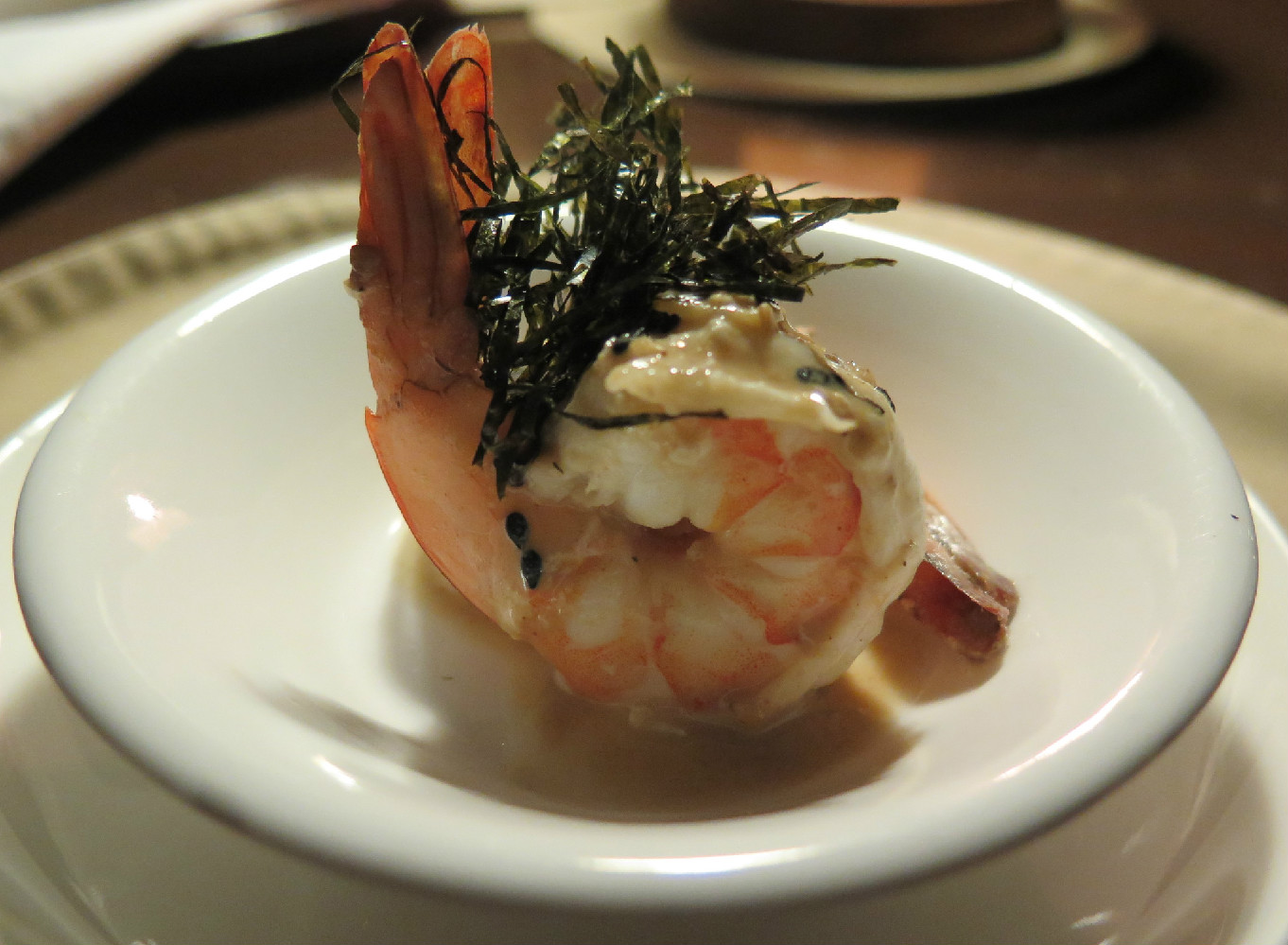 We sat in the verandah , overlooking the pebble-strewn courtyard which has tables of stone. Irrespective of the seating domains, all the tables are admirably spaced widely apart. The very limited wine menu cries out for more variety , and charging only Rs.300 (US$ 7) as corkage fee for bottles procured from outside is not the most elegant of solutions. A reasonable Rs.3000 is billed for a seven course meal. 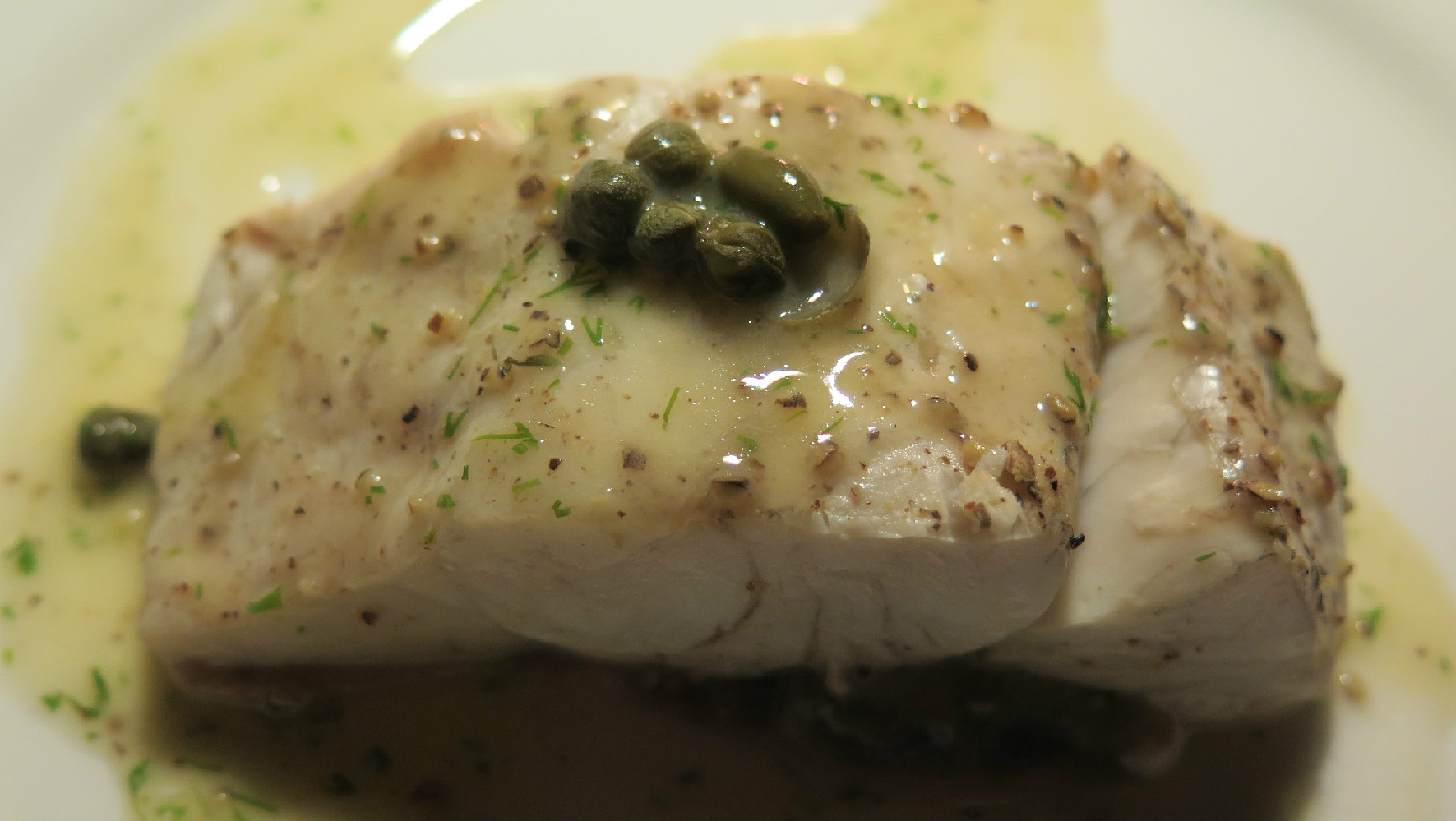 I don't think Grasshopper understands how pliable and satisfying a German lass has the potential to be. The pork with pickled cabbage it presented had cuts of fat amalgated with inadequately tenderized meat . Sea bass was dressed up as an appetizing voluptuous hunk of white fish bathed in a tart sauce.  I see now that in restaurant after fine-dining restaurant - in NZ, Australia and India experienced over the last four years  - a major chunk of chefs present  fish which is admirably soft with an odour that is very safely non-offensive but very few of these gentlemen know how to channel the fish and manage the supply chain in such a way that the taste's redolence satisfies a true fish-lover. The one here had everything going for it except deep flavour and a smartly roasted exterior - two crucial qualities the absence of which semi-sunk this sea bass which Mr.Hinduja informed me was likely farmed near Vizag (overseas seabass tasted in JW Marriot's Alba was not impressive either).
Mr.Suresh Hinduja - Restaurant Critic for Times of India , besides being an interesting gentleman.

Mr.Hinduja was greatly impressed by the lamb which he felt to the best version he'd tasted in the entire country. Superbly slow-cooked with a slickly roasted exterior, it displayed a  beautiful disclipine in texture right throught  the entire thickness and for all its manicured sculpted beauty, this tournedo would have been a complete tour de force, were it not for its slightly dry interior. Chunks of potato on the same plate lacked the pillowy softness that fine-dining restaurants are expected to engineer.

Service was just about par for the course but it could easily be more polished and charming, apart from doing more to ensure the kind of vigilance that redeems world-class establishments. Keeping service staff of that caliber will easily drive up the bill but I am sure that the extra bucks will not matter to the kind of people who come to Grasshopper expecting it to be a destination restaurant (there is a very low likelihood of diners accidentally finding themselves in this remote place).
Desserts totally atoned. Their excellent panacotta had soft body - with cool creamy notes of exquisite espresso. Discs of chocolate ganache were terrific - their silky melting  sophisticated richness recalling an intimate encounter with a curvaceous supermodel. This was cleverly paired with mustard ice cream that would have benefitted from slipping one notch lower in sweetness, but that is strictly a minor crib only. 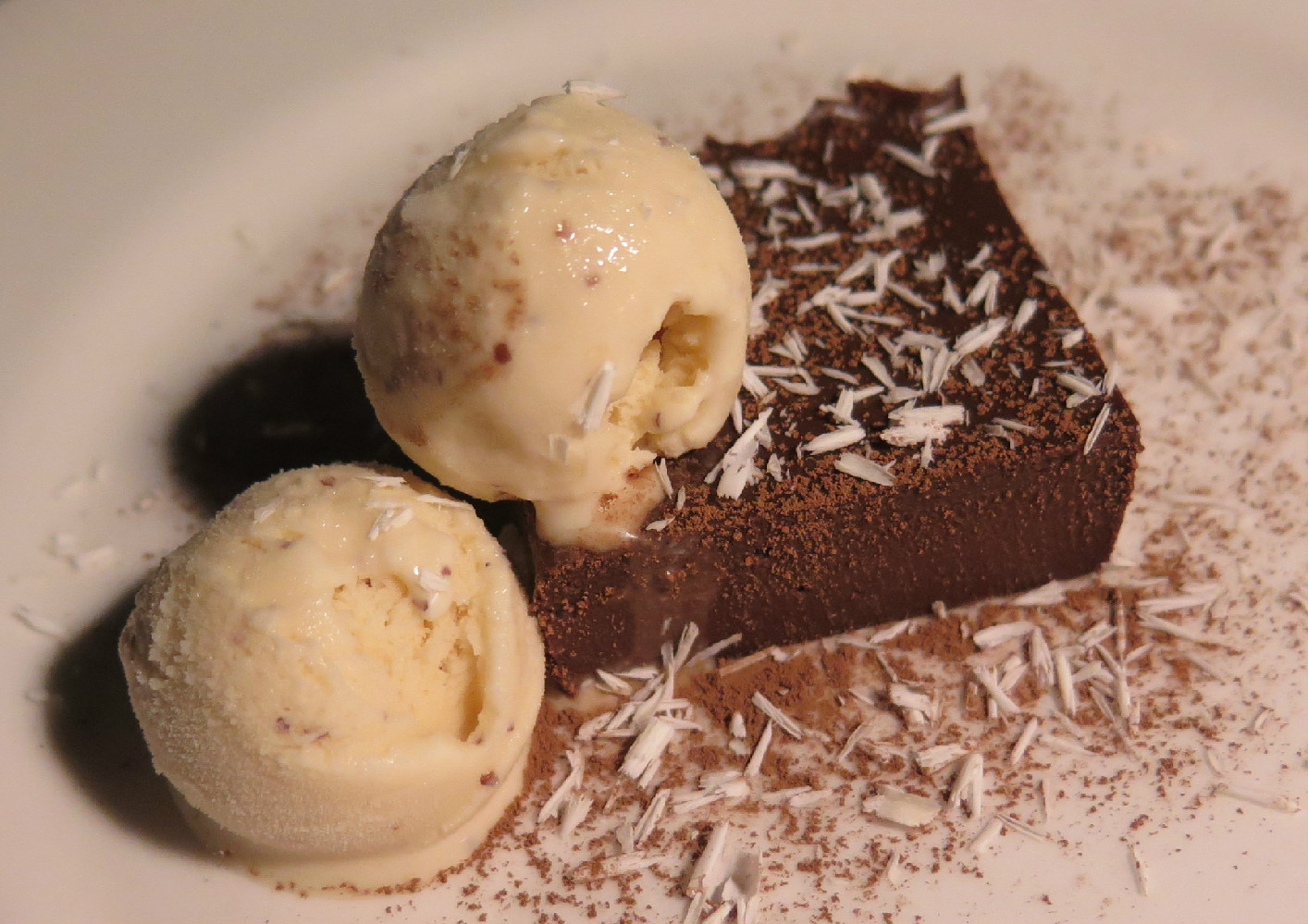 I admire the audacity of Mr.Himanshu Dhimri and Mrs.Sonali Dhimri but yes, there is certainly space for this restaurant to evolve.
This 10 course Grasshopper meal came at the end of a month-long India trip that included dining experiences in Orient Express and Indian Accent in Delhi, Zodiac Grill and Masala Library in Mumbai, Caperberry and Dum Phukt Jolly Nabobs in Bangalore. It was a succession of dining experiences that sometimes made me collapse with the exertion of it all, with my ability to remain standing not exactly helped by the fact that the pocket had become much lighter. Sadly , in none of these restaurants did I come across an auteuristic signature that I could deeply admire.  I realized as I did in my whirwhind coverage of Sydney's and Melbourne's elite restaurants, that in fleeting trips like this , reaching restaurant nirvana is often a throw of dice. Sometimes you come away with experiences that dreams are made of, but unfortunately on all of the above journeys, I have been left with a mixed bag that one is not entirely persuaded to fondly lug along the lanes of memory.
UPN
UPNWORLD welcomes your comments.