Toast & Tonic : Restaurant Review
2.75 stars out of 5 (Close to Good)
Visited May 2017
Bangalore, India
Thirty six year old Manu Chandra is one of the select few chef-entrepreneurs who has braised and seared a well-known signature across Bangalore's stand-alone cosmopolitan restaurant scene. Based in the city from the last ten years, originally from Delhi, and trained in New York, he revels in dishes that have an international felicity. Now, his "Toast & Tonic" which proclaims an "NY East Village Style" ethos, makes T&T signature Pastrami and 7 hour roasted pork shoulder co-inhabit the menu space with an admirable local-product mantra by way of native grains like millet, soft-shell crab from Bhimavaram and Gobindobhog sticky rice.  Would this latest of his restaurants pack the consistent brilliance that has eluded me in his other ventures?
The place is situated just down the road from his well-recognized Olive Beach. Inside its keenly air-conditioned climes, a restrained hipster-chic vibe percolates. More on the casual side, but with a stylish streak that does take serious cash to design. It is not that luxurious place where you can plan a special date or anniversary (such type of opulent settings have never appealed to Manu Chandra, at least in Bangalore). 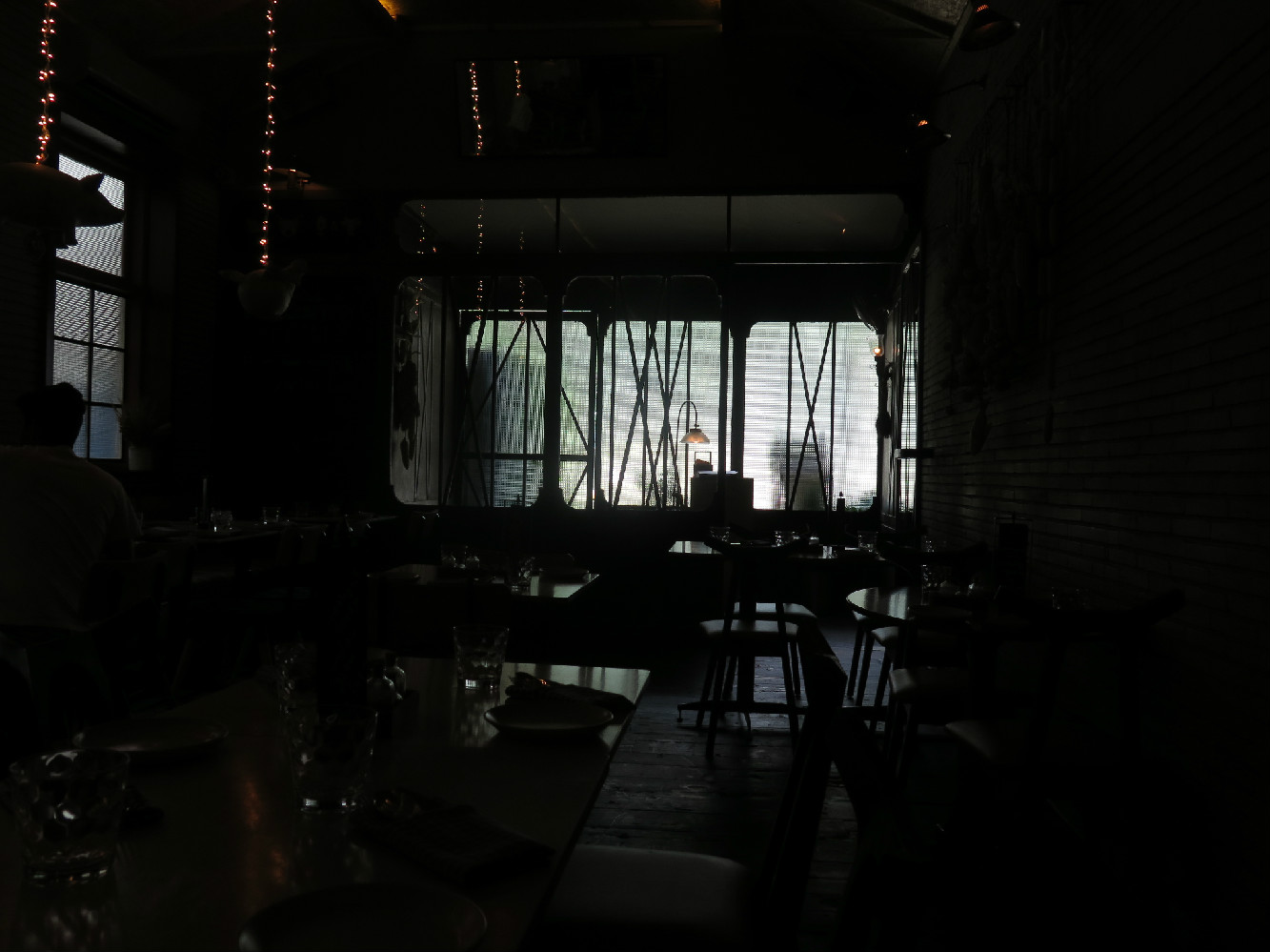 The show-opener was warm asparagus and green beans admirably tossed with Avarekai (a variety of local broad beans) all tied together with gently creamy peanut dressing, which rather than wowing with vegetal zing, satisfied with soft textures.
Disappointment arose with water-chestnut and baby-corn tempura, which turned out to be inconsequential small fried bits - the first ingredient's cuts were not large enough and the batter was a far cry from top-notch tempura. My peace of mind was restored with Au Revoir Colonel Sanders Fried Chicken - a mouthful both to say and to savour by taste. 'Twas superbly  tender courtesy marination with yoghurt, and excellently crunchy with a unique "sourdough raagi" batter. The accoutrements of five spice aioli and naga chilli sauce were, to use a polite sophisticated phrase - kick-ass.
Blond wood, jazzed up with a mosaic pattern and smartly highlighted with small pools of serial light, panels much of the upper part of the large room, and coolly washes over the prominently featured bar area which glows with refreshing glamour. Table-tops are bare while the glassware and cutlery make a better case.

Mushroom Toast (on thin sourdough) was lacklustre, missing the umami hit of a real mushroom preparation and disappointment escalated with "Vegetable Kibbeh" which were croquettes of sadly muddled taste (I later regretted not trying Cochin Mackerel Toast in its place). 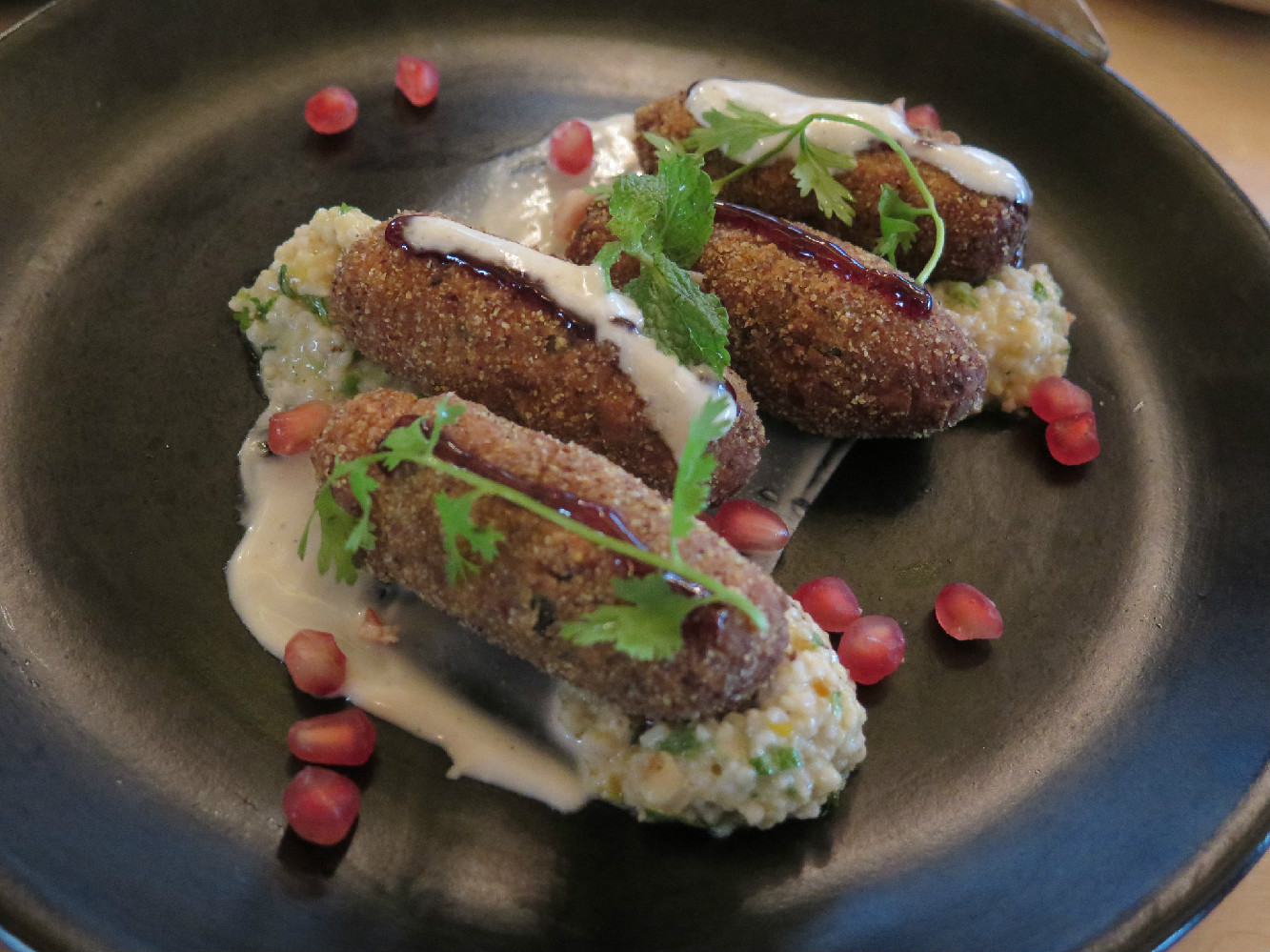 The dish that mercifully lifted the redeeming sail of our meal was "Brick Chicken". This main course stacked sizeable cuts of gloriously succulent chicken, smouldering with a seductive flavour that recalled Japanese karaage-style anointments. A elaborate visually impressive style informed the presentation of a large cut of pan-roasted sea bass, interestingly paired with an asparagus sauce that mimicked a mildly spicy green chutney, and soft millet creatively blended into mashed potato. The only setback here was that the handsome soft fish lacked deep flavour (common with so much of the seabass offered in Bangalore restaurants - why not use other native fish from our delicious local variety on the main course as well?) 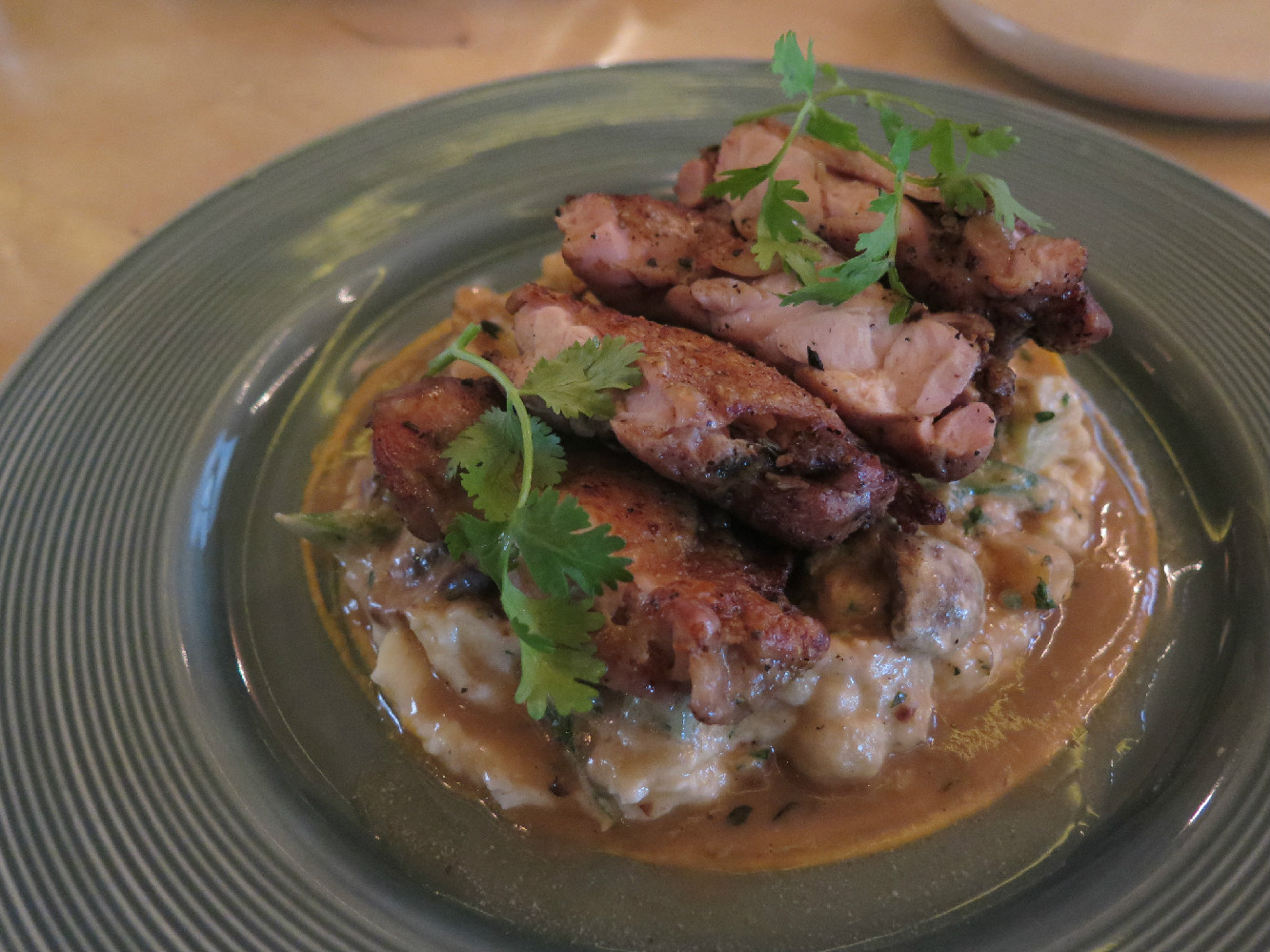 While there is no shortage of service staff, you feel the same story continuing as it did in Mr.Chandra's other restaurants - by-the-numbers service with no real warmth or hospitality. Smiles were rare, and our send-off was especially hollow - there is no maitre d' or manager who you can count on to be your consistently gracious host. Since Mr.Chandra sets a lot of store from his NY innings ("east village ethos" aside), why not take a leaf out of Union Square Cafe which is renowned for its warm personalized service?
In desserts, "Expressions of Jaggery" suffered stage-fright - a jaggery caramel custard was commendably on-target but the rest of the multi-partite composition was not, with an ill-advised coffee-cardamom ice-cream's strong flavour hijacking others on the same plate. Alas, our last dish of the afternoon did not mollify - the "Coffee" dessert spun its tricks with cremeux, cake, gel and ice-cream but the flavours were subdued.
A three course meal for 2 , garnished later with 30 % tax, can touch Rs.3000, and comfortably exceed it if you have drinks or more starters. Even a Mercedes Benz can have value for money but that quality does not manifest here.
I feel the young chef-entrepreneur behind this restaurant is more concerned with running multiple commercial establishments while not reserving care to assiduously power at least one flagship restaurant which can truly be called world-class. Olive Beach...Likethatonly...and now Toast & Tonic - all with potential but none where I'm itching to return. 60 to 70 % effort goes into these restaurants - the rest is frittered away in a hands-off approach and the absence of continual fine-tuning, the inverse of which happens in truly outstanding restaurants.
UPN
UPNWORLD welcomes your comments.