My faith in Auckland fine-dining was at an all-time low. A few more visits would finish a touring of its creme de la creme and yet that one great meal continues to elude me. Is this why people move to Australia? Would Kazuya provide a break-through? Doing a Google image search of the restaurant name brings up the animated image of a quasi-titanic boxer - hoping for that knock-out punch, I settled in for 9 course dinner in this newest entrant amongst Auckland's fine-dining elite.

Kazuya struck a most auspicious gong of flavour with one of his opening salvos - a tall glass of exotic delights. There was marine meat at the bed of that receptacle: It tasted so resoundingly of crab that my eyes widened. Cream of edamame tried to smooth out those trenchant frequencies while little pearls of grapefruit popped with textural zing and fruity zest. I was reminded of Frank Bruni's words - "it snaps the palate to attention - superior Japanese food has that effect". 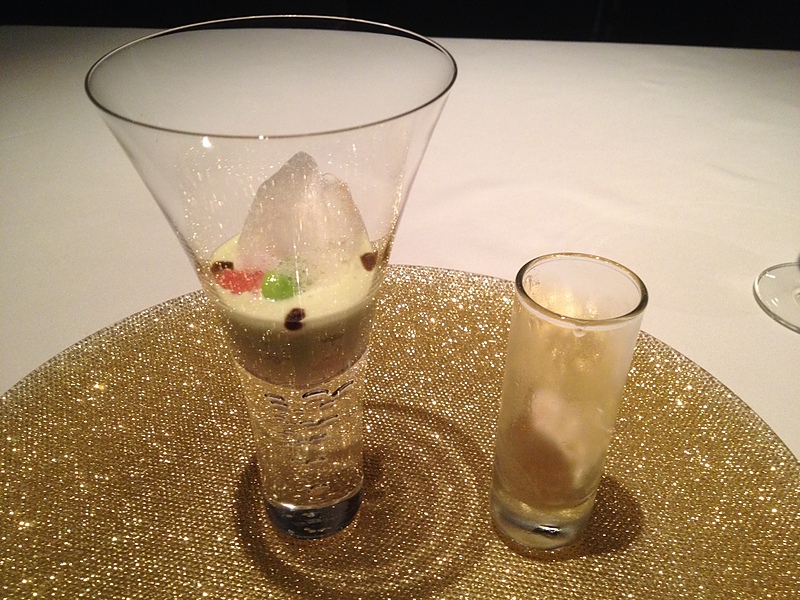 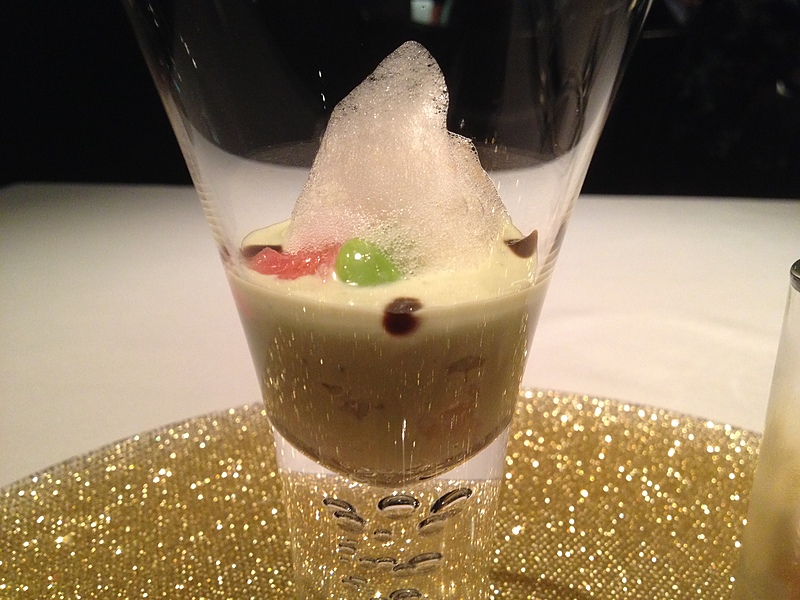 After arriving in Aotearoa, Kazuya Yamauchi channeled through the popular downtown restaurants Rice and Cibo before striking out on his own, in this discreet location on Symonds Street. His culinary history mentions his 10 year stint in Acquapazza - an expensive Italian restaurant in Tokyo. I remember it from Alan Richman's wonderful article in GQ where he profiled a culinary trip to that megapolis and said that "Acquapazza" was the only "poor meal" he had in that entire trip. But that noble mission was conducted in 2008, while my hostess, upon being specifically asked, said that Chef Kazuya had left Tokyo in 2005 or '06 to chart a new innings in Kiwiland. I took that as a good omen. Her curiosity was piqued by my line of questioning, and she asked whether I was a chef - and I replied with an exchange of smiles- "No, I like to read about Chefs". I proudly declare my primary profession when asked by people elsewhere, but when a restaurant steward asks me "Are you a Chef?" it is an ethical curse not to be able to say "No, I am a critic!"

The Amuse bouches failed to amuse. A prawn fritter was forgettable, I won't mind having five of those "Salmon with roe" but I won't exult on any of those tastings, and the Gazpacho sphere was the very first time I tasted a spherification in New Zealand, but it had, as the picture hints, a quiet flavour of green tomato, like a young too-shy-to-do-anything kimono-bound Geisha (whom, thankfully, you won't get anywhere in New Zealand) 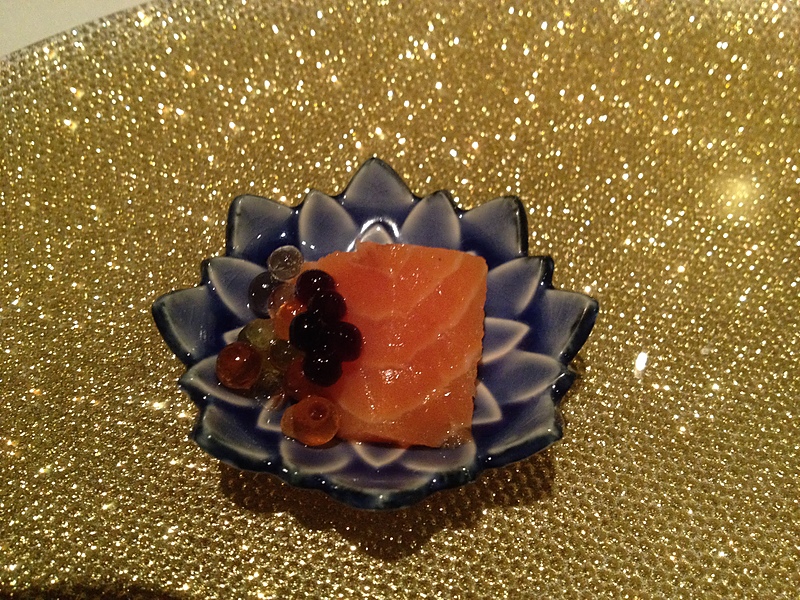 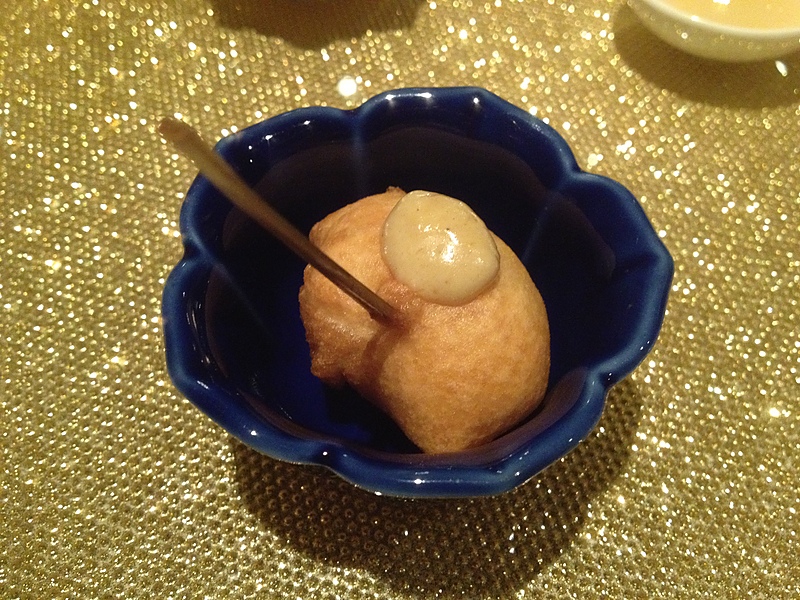 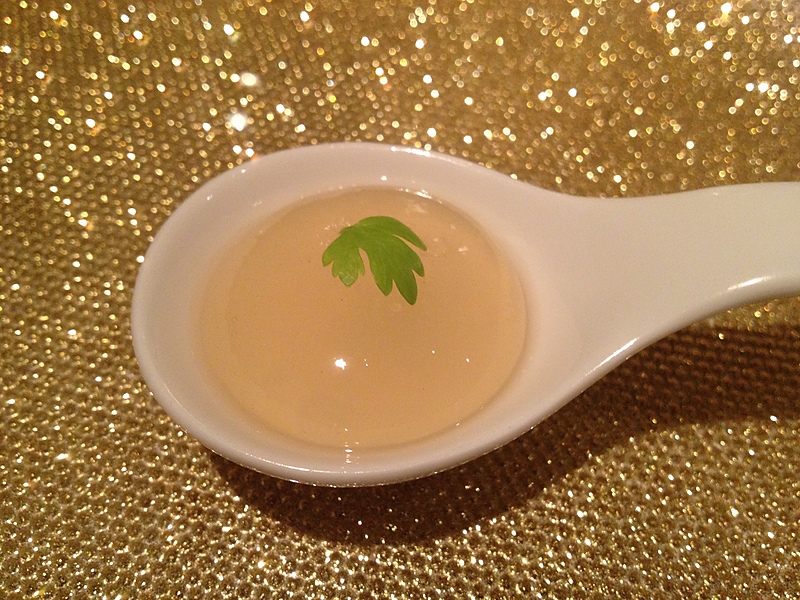 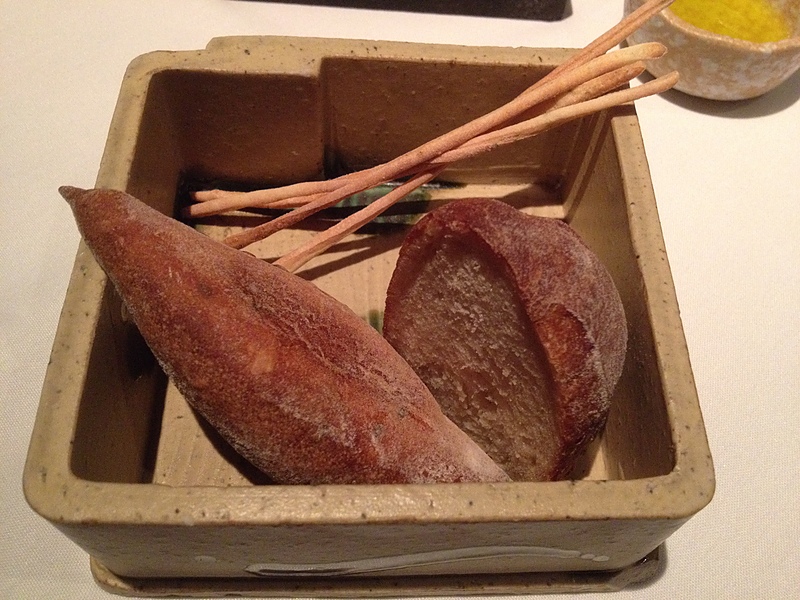 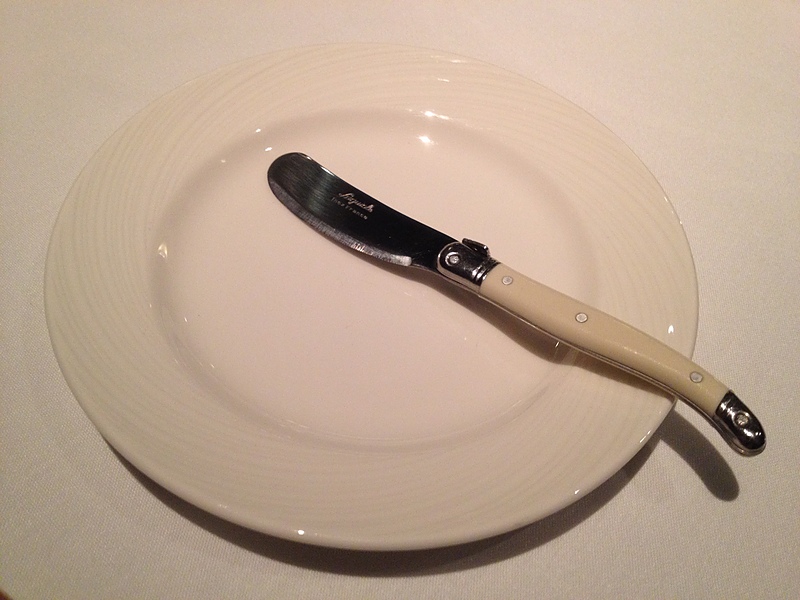 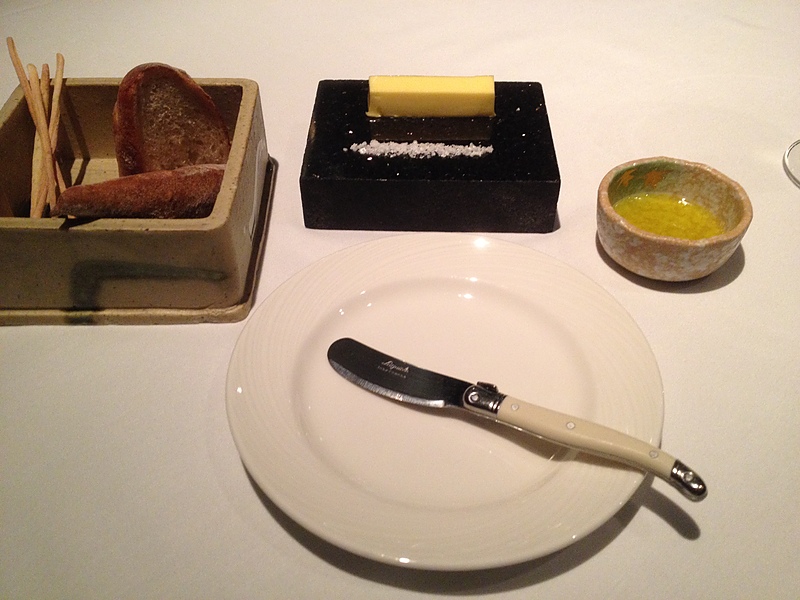 The Kingfish's presentation was glossy and stylish- it was taken out of a steeping bowl at the tableside and and daintily positioned at the center of the plate. These were glistening moist cuts - as you ate them, it was like consuming soft naked flesh, and they carried the briny funk of the sea. Smooth clear flavours of sweet corn wafted from the clouds of its puree, and a basil sauce slipped Italy into this mix. Technical chops and clean notes thus offset the shortage of cohesive taste. 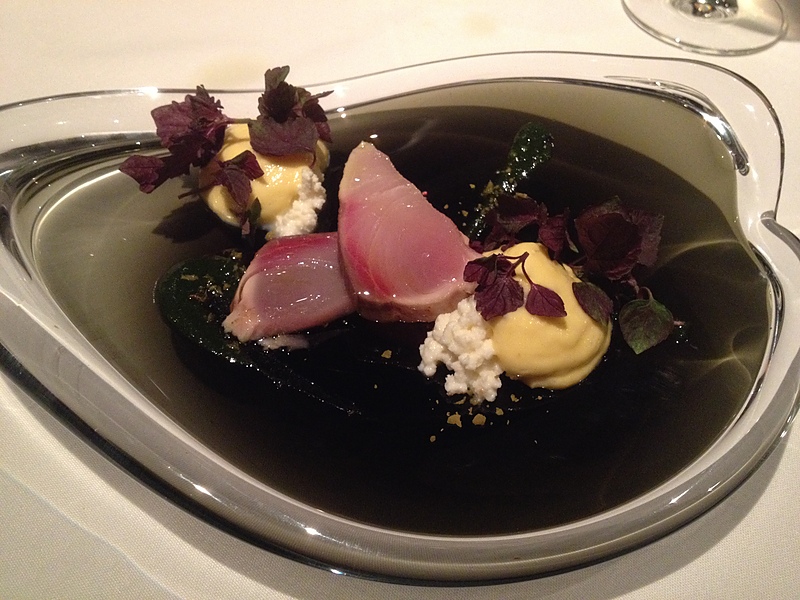 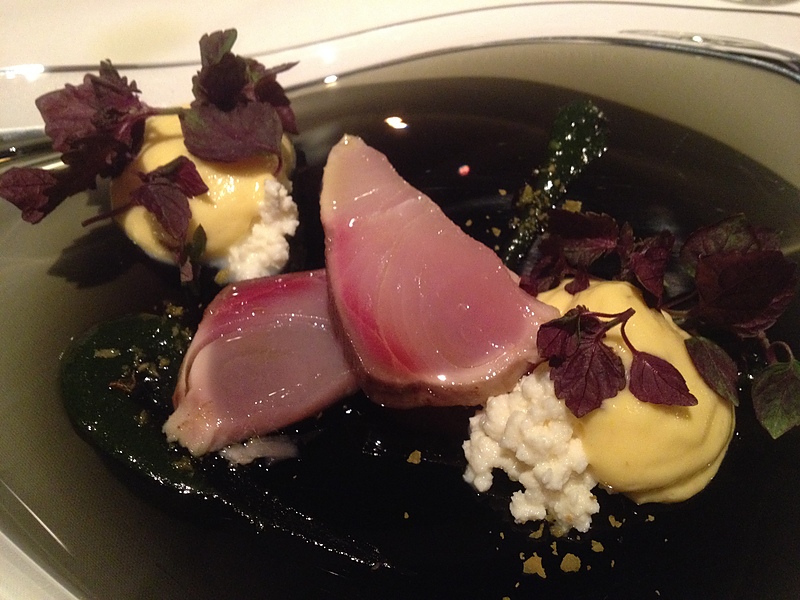 The sommelier identified himself as Mojo. Generously, he volunteered to let me try 3 different types of white wine, while showcasing the bottle and pouring the wine with lyrical flourish and pace. Mr.Mojo distinguished himself as a compact slim man who jettisoned any traditional Japanese reserve and spoke English with a flamboyant throw of words like how certain Nipponese interestingly do- listening to his manner and speech, you'd have very little doubt that he is the artistic type. Noting his trippy style also helps to understand why Rajnikanth became popular in Japan. He energetically moved about the room, smiling without hesitation, attending to all aspects of service, craning his neck and spine often to see if the obliquely positioned booths needed attention, and manouevering his lithe body with such verve that I wouldn't have batted an eyelid if he suddenly chose to pirouette and ballet-dance on tip-toe.

Bringing up Kazuya's "Signature" dish, the waitress mentioned "In this dish, you can taste 30 vegetables". I can imagine a good chunk of readers gearing up to exit this article if I enumerate those ingredients. Let it suffice to say that while I congratulate Mr.Kazuya for rustling up such a fey thicket, I have enjoyed much smaller salads with much more joy. Yes, he did a tres earnest job of trying to jazz it up with vegetable purees, nuts, red pepper reductions and even olive oil transmogrified into white powder, but what it gained in variety, it lost in concentrated flavour. I knew that it had been modeled after super chef Michel Bras' Gargouilliou - the original riot of colourful vegetables (far away in California too, New Age Guru David Kinch attempts similar stunts with his "Into the Vegetable Garden"). So when I asked the waitress what was the inspiration for this dish, she got around to talking of a 3 star French restaurant but after realizing that I was already up to speed, she clarified that this dish was "different" from Gargouillou. 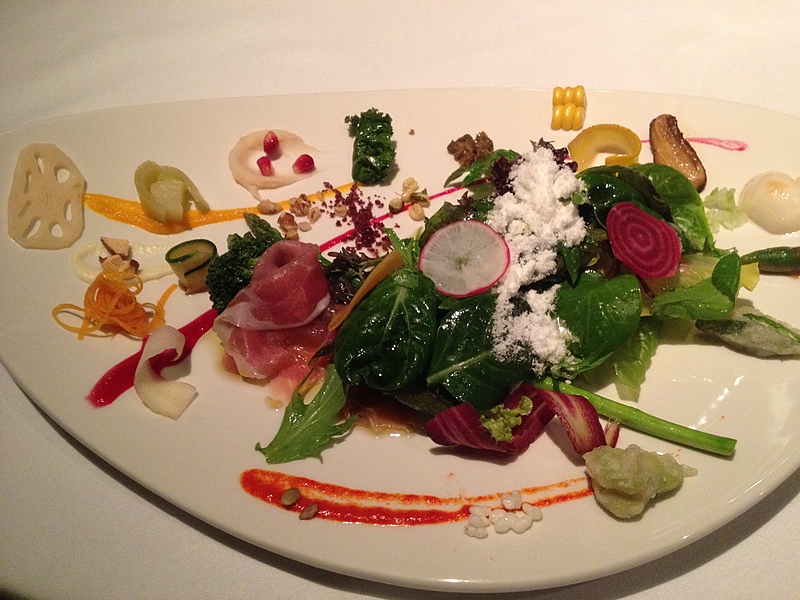 Finely roasted, well-seasoned snapper needs nothing else on the plate - it is a sensuous beauty that holds its own no matter what distractions and frills you gherao it with. But the one here was not gifted with natural depth of flavour and its minimalistic cooking further quietened its pleasures - it got lost when paired with spinach puree and a mediocre-tasting stunt of "sushi rice" sauce. The chef cannot be blamed for not doing enough to enhance the duck dish - its pink sousvide-like flesh has a slow-roasted crisp exterior topped off with a slice of roast foie gras, a feeble foam of mimolette and miso further crowned it and the whole arrangement was ensconced over a hushed bed of aubergine consomme. But by the end of the meal, there was no arresting reason to remember it. 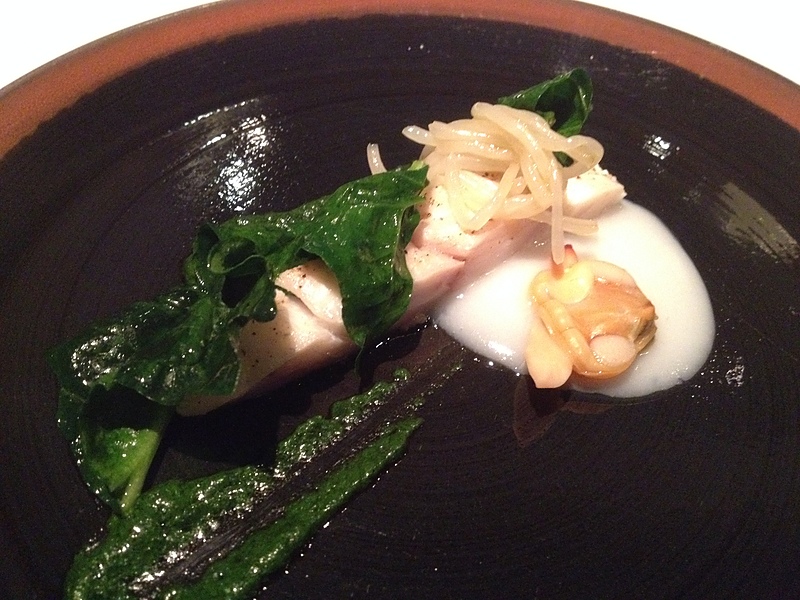 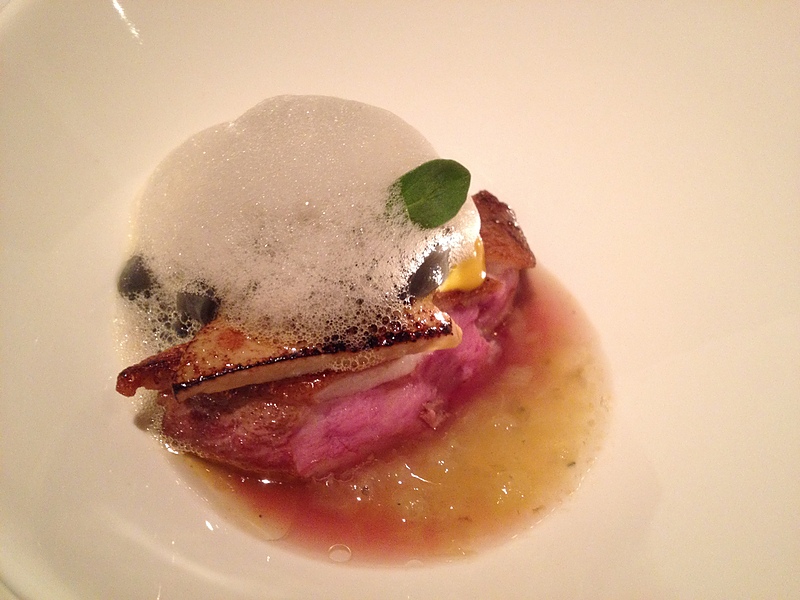 The ambience is a mood-deepening blend of dark brown melding into pools of tastefully illuminated white - a prettified boardroom. However, your reverie might be ruptured if, like me, you have the misfortune of sitting next to a group of half a dozen who uproariously laugh and forget the fact that they are setting in a high-end restaurant where decorum is much appreciated. I have heaps of respect for Kiwis - considerate and polite folks that they are, but after also noting similar behaviour multiple times in Sidart, I wonder why some of them break this discretion so resoundingly in spaces like these.When I came back to my table after a restroom break - they had vanished...in wish-fulfilling mystic style. However, my other wishes that night did not come true. White gloves often adorned the hands of the waitstaff all of whom hailed from the Chef's motherland - among them were a young bespectacled girl clad in black, a middle-age femme who seemed to ever so slightly vertically undulate as she traversed, and a sweet-looking slim young lady dressed in a tailored suit - they all communicated effectively : the Nipponese here give a better account of their English than their compatriots do in the city's other restaurants. 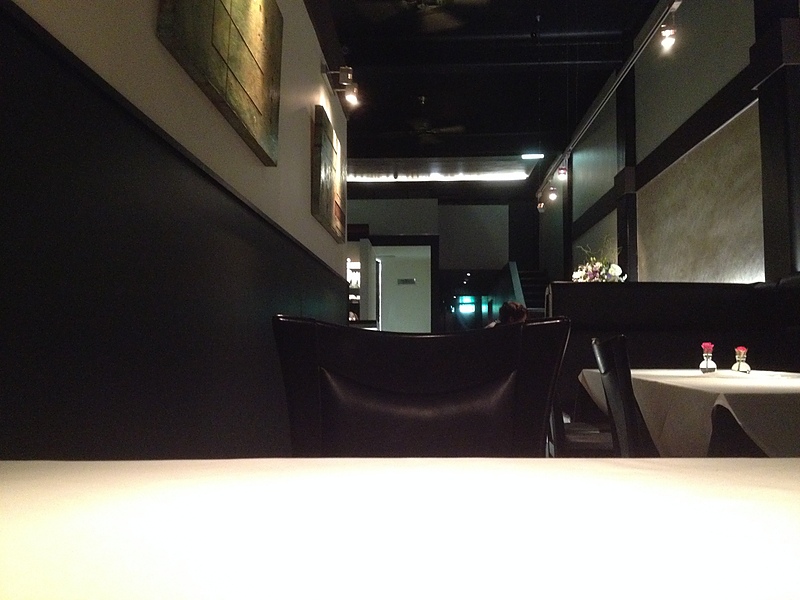 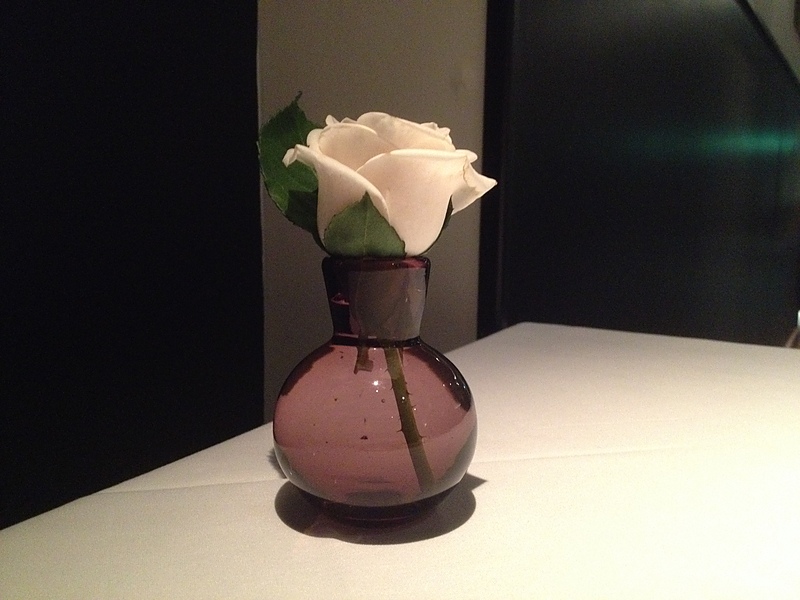 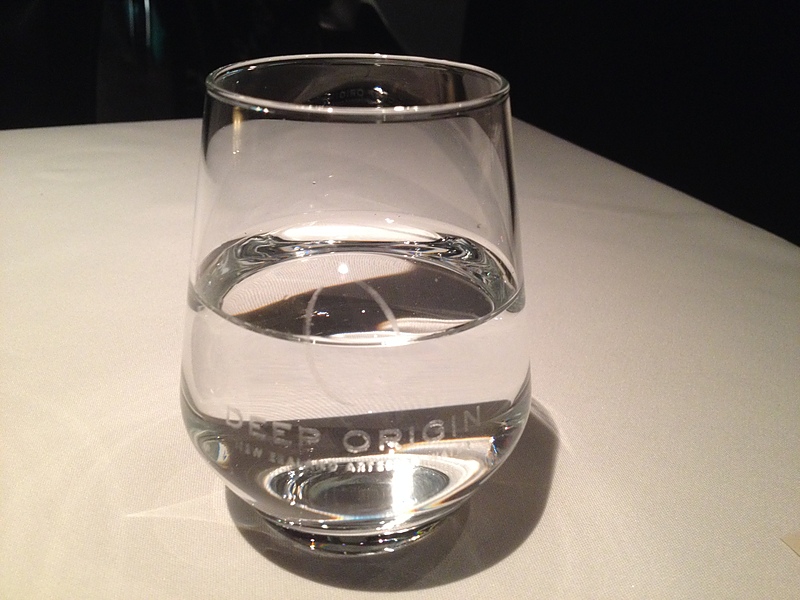 I wondered why this was placed by itself on the table. 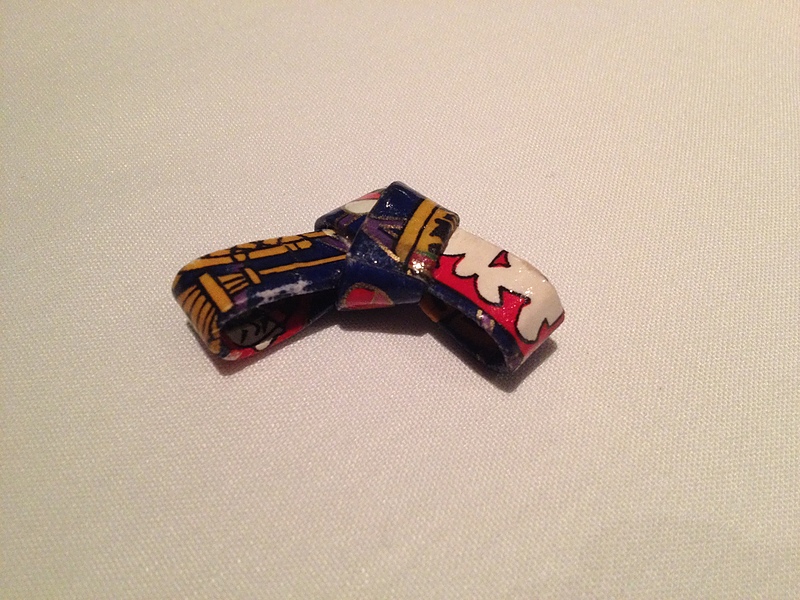 A little later after the waitress came by for the second time, I understood why. 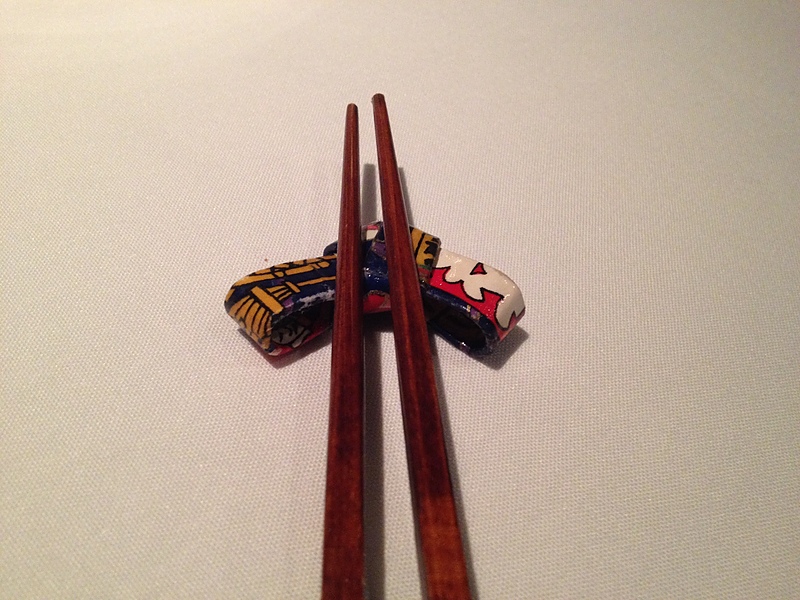 The lamb appeared in appetite-arousing pink, flanked by fine purees of pommes and cabbage, moreover the charcoal flavour was a welcome addition, but the lamb per se was on the chewier side. At this level of expectation, you cannot excuse meat that is less than splendidly soft. What I will remember is a small gleaming finger bowl that came with it, in keeping with the culinary Japanese yen of making items petite and beautiful. The jus ,the stewardess said, was prepared with red wine and reduced over 2 nights, but when she came back to collect the plate later, I asked her who would be there to check if there was a fire in the kitchen. She softly chuckled and replied that Kazuya stayed in that place "all the time"...and clarified later "the stove is switched off at midnight". She apparently thought this was a good story to share, so when she walked back to Mojo, she ostensibly replayed that conversation and he too mirthed quietly, but after glancing at my direction and seeing that I was keenly watching them, he muzzled his smile and got on with his work. 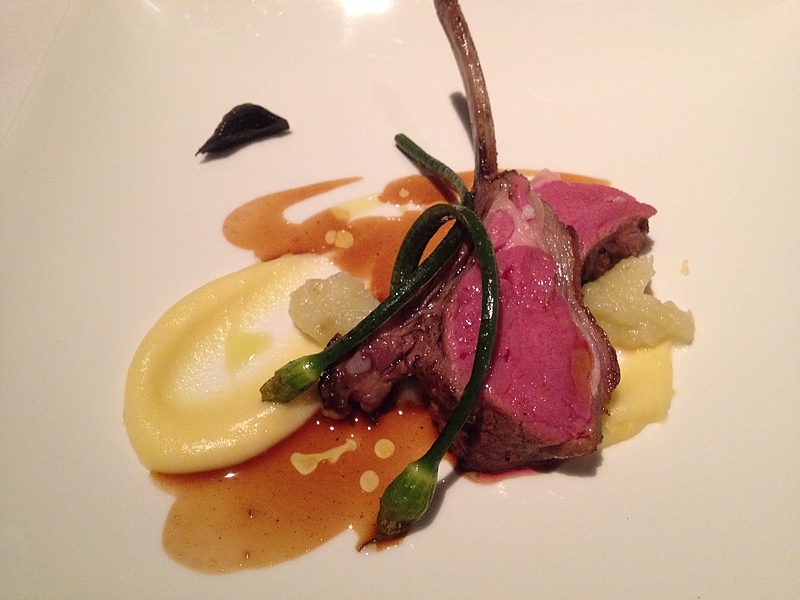 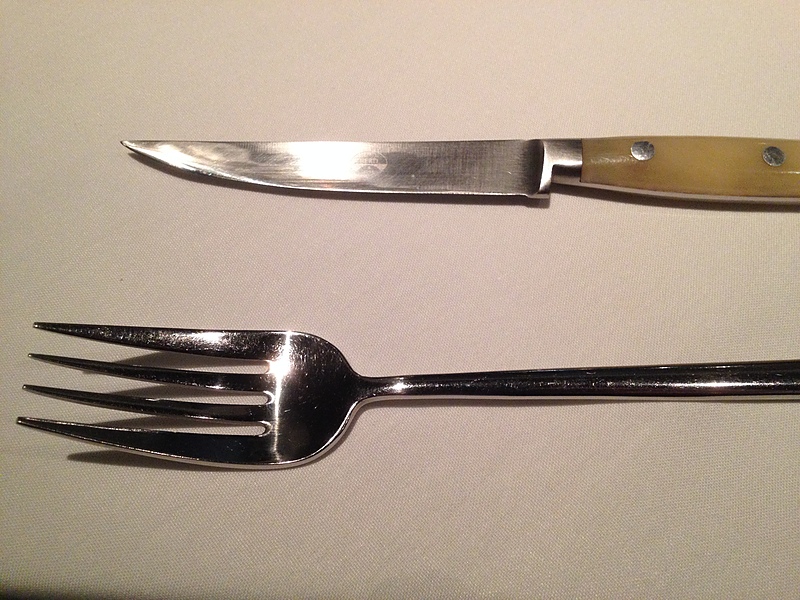 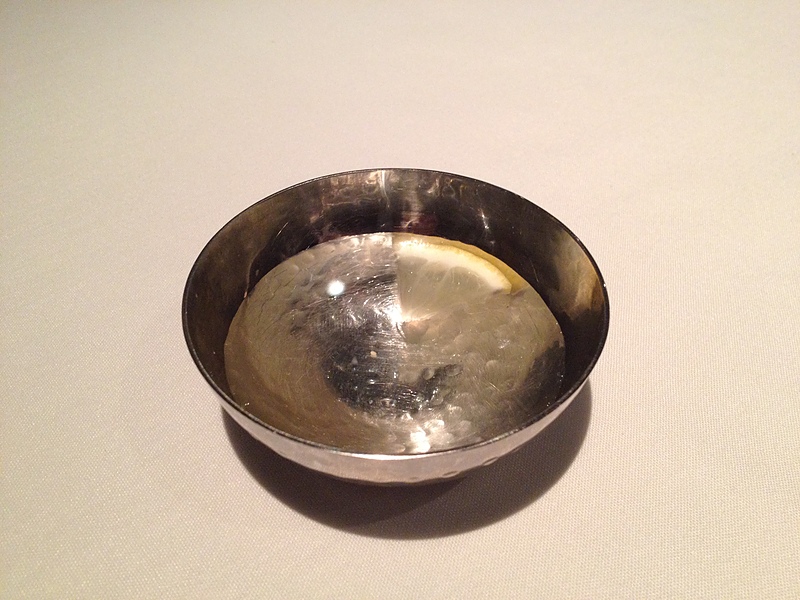 The pre-dessert attempted a keen balance by juxtaposing a brown-sugar crisp with a silky square of Creme Brulee - we may take the liberty of interpreting this as a French distillation of the ultra-smooth egg cake - Tamago - that often rounds out omakase menus. But the flavour calibration was rendered out of whack by the same bowl's strawberry sorbet - its tart contours refused to blend into delicious harmony. The main dessert featured such riffs as a small ice-cream quenelle that was lightly infused with a "pastry" flavour, but the real marquee player was a Valrhona chocolate cake that lusciously filled the mouth with warm richness. It met the slices and sauce of mango like how two significant waves lap into each other with minimal turbulence and ample splice. 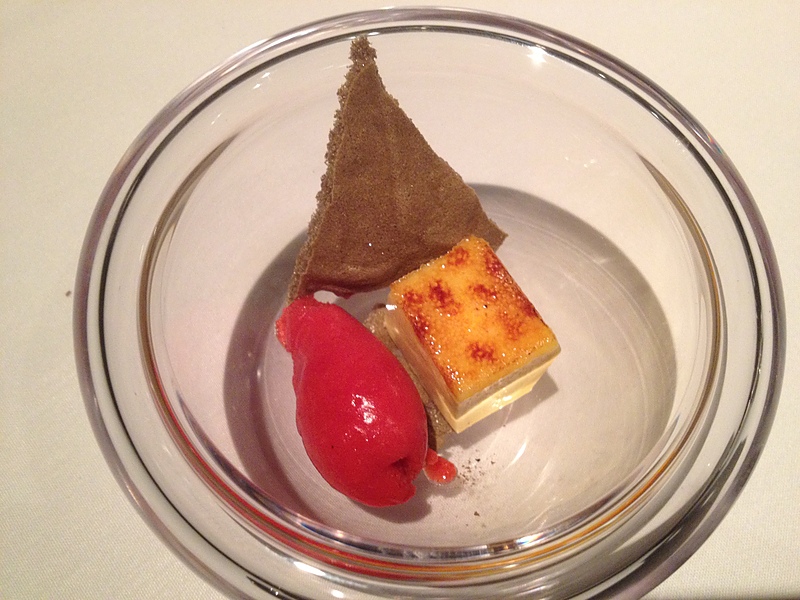 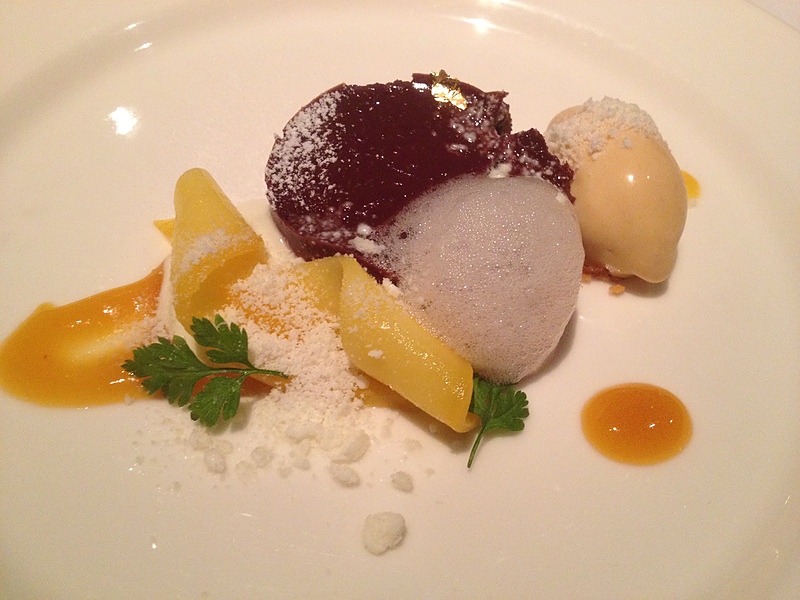 Petit fours: Satisfyingly rich cherry with apricot glaze, passionfruit macaron with lemon cream - a small treat of little consequence and White Chocolate Bomb - you need not fear any detonation here; the effects come from the embedded "pop rocks candy" that crackles on your tongue. 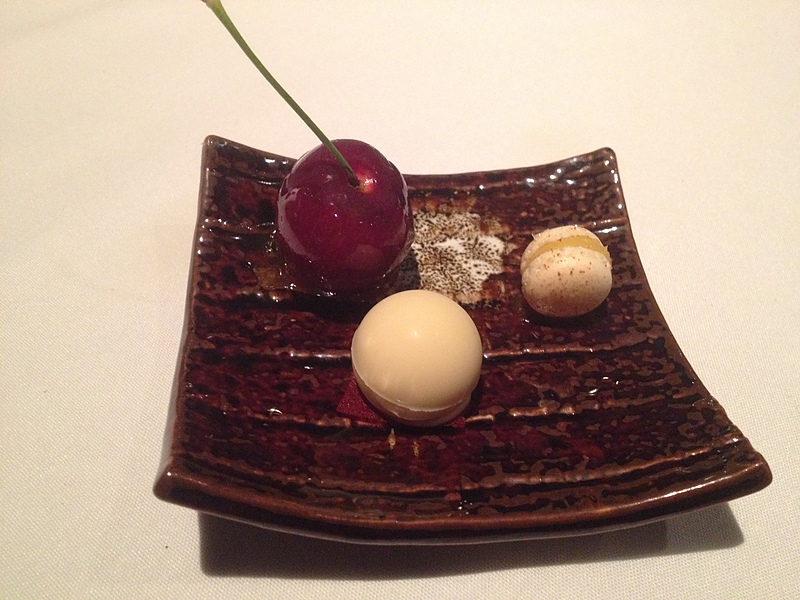 One of the last conversations with Mojo ended with smiling questions from him and brief replies from me.
"You are not a Chef right?!"
"No"
"But you like our food??"
"Yes!"

NZ$130 for a 9 course meal in a refined ambience with keen service undoubtedly qualifies as a good deal - in this menu bracket, it is cheaper compared to high-profile haute-cuisine joints like French Cafe (which is a stone's throw away from here), Meredith's, Sidart and Clooney. And the tasting menu in none of these places wheels out a cheese cart in the grand old Francaise tradition as Kazuya does, and offers you such varieties as Mont D'Or, Camembert from Normandie and Maroilles (none of which I liked, unfortunately)

Well-placed Auckland commentators have heaped praise on Kazuya, and one of them even said that this would be a cult restaurant if it were in NY or London. I take no pleasure in disagreeing with them - the Culinary Lord knows that this town needs more fine-dining epiphanies, but my meal offered no compelling evidence of a thrilling discovery. It was a disappointment because I had earnestly hoped for left-of-the-field delights to emerge and surprise my jaded palate in this Euro-Japanese restaurant - the mains particularly let me down with their mainstream caution. I have only experienced the full tasting menu here, and not the a la carte, but if you cannot convey an adequate summation of your potential by a 9 course menu, then you are asking for too much. May I be impertinent enough to say that if Kazuya Yamauchi had gained experience in the European temples of gastronomy, or an American epicentre of Euro-Asian fusion cuisine like Jean Georges, or for that matter in a pleomorphic powerhouse like Tokyo's Ryugin, his food would have presented more of a challenge. At the moment though, his cuisine needs more depth of flavour and higher imagination if this restaurant is to be called world-class, but it cannot be denied that it offers good value for money.