I'd dipped into the bounties of Meredith's, French Cafe and Sidart and come away un-astounded. On Masterchef NZ, Chef Ben Bayly (of the acclaimed Grove restaurant in Auckland's downtown) had featured multiple times as guest judge, and his 2014 appearance reminded me that CBB's ouevre in CBD remained to be explored. Bayly is in no danger of stealing the crown from Daniel Craig to become the next Bond - charm and suave style were seen to be eschewed by this young man in favour of a humourless and rather tense focus on how the contestants were faring. But I didn't get tied up too much by his physiognomy - Kiwis can be a beguiling lot, their demeanours often not correspondent with their doings. Hoping for thrills galore, I waded into his Grove.

Grove, contrary to connotations of aggregated thickets, can be easily missed as you plough into downtown and coast past the picturesque St.Patrick Square. The restaurant, as you enter, is L-shaped with the short limb distally situated - it's rimmed by windows that look out onto tree-shaded streets. This latter space is the location of choice for romantic afternoons.

The opening salvo was heralded by "Bluff Oyster Three Ways" - Picture a Chef presenting his business card that splits into a triptych of talents. When the waitress asked me asked how it was ,I said "Possibly the most interesting starter I've had thus far in Auckland". More than the neatly executed fry, passable au naturelle piece and the strongly but unfetchingly flavoured oyster custard, the side players scored and quietly assumed marquee status. I'm a pleasured veteran of Saturday morning breakfasts powered, among other delights, by streaky bacon (Can it save the world? Possibly...) hash browns and some mayo sprinkled with a Cajun mix. So I was gratified to find on that plate, petite arrangements of full-throttle pancetta, tiny cubes of fried potato and tender twigs of broccoli all cut by perky mayo. Some fiend in the kitchen had topped another little fan of that toothsome broccoli with the toasted deliciousness of a rye bread crisp.

Judica is the one and only person of Indian extraction that I have found thus far amongst the staff of NZ fine-dining realms. Hosting my first evening in Grove, she conducted herself with exemplary efficiency and smiling half-jesting finesse. She'd blitz from one end of the restaurant to another, and sometimes I thought she might crash into something with her unchecked speed, but she never did that - instead she'd smoothly decelerate upon reaching her target while snappily ensuring a turn-over of dish orders and cutlery. 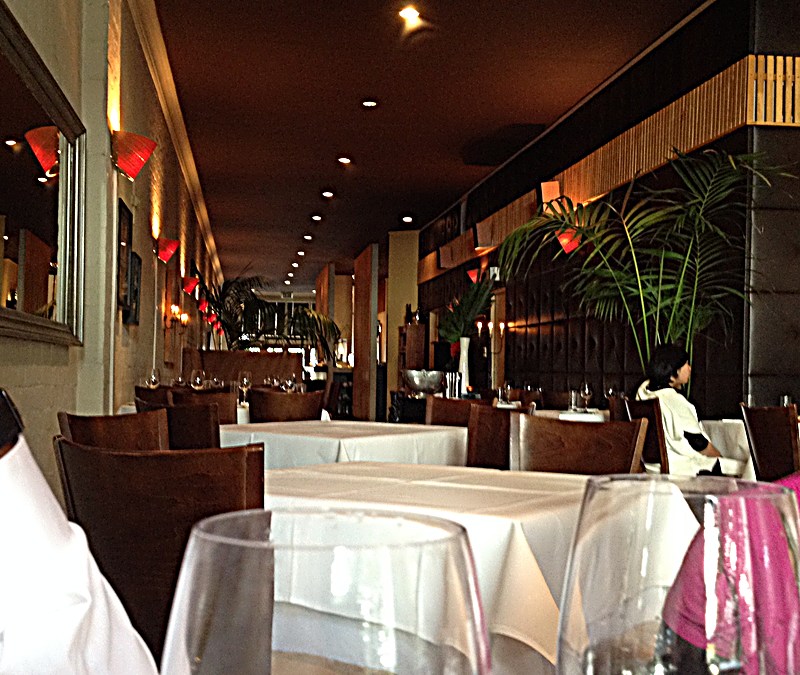 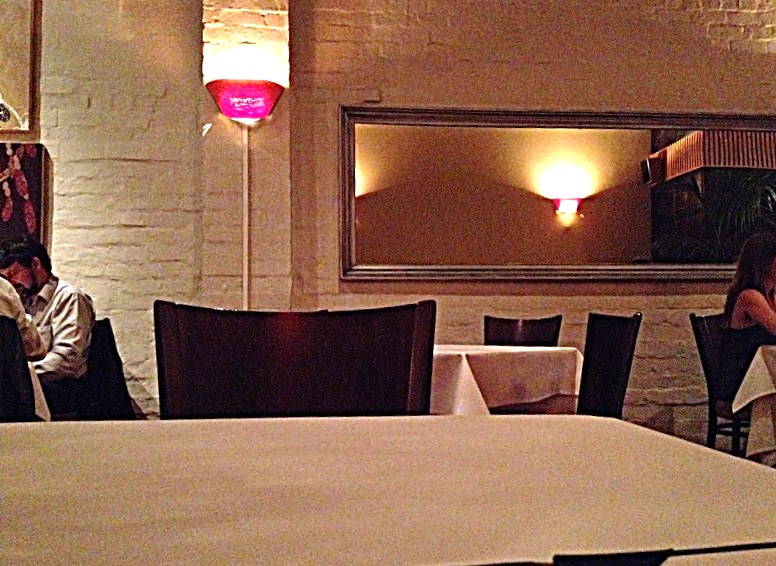 Grove, quite refreshingly but also rather disconcertingly, does not offer verbal dish descriptions. From what I gathered on my first evening there, you might get a "chicken" softly uttered, but they won't go so far as "pig, fruit and sauce". Judica however proved to a ready repository of specialized knowledge that was coolly delivered when I wanted to go deeper into the identity of ingredients. I occasionally fantasize about my supposed intelligence, but it must be confessed I sometimes end up asking stunningly stupid questions. Breezily searching through the the dense design of of my main course through those muted lights, I did not see the featured offal and as Judica drew up ,I asked her "Can you show me where the sweetbreads are?" 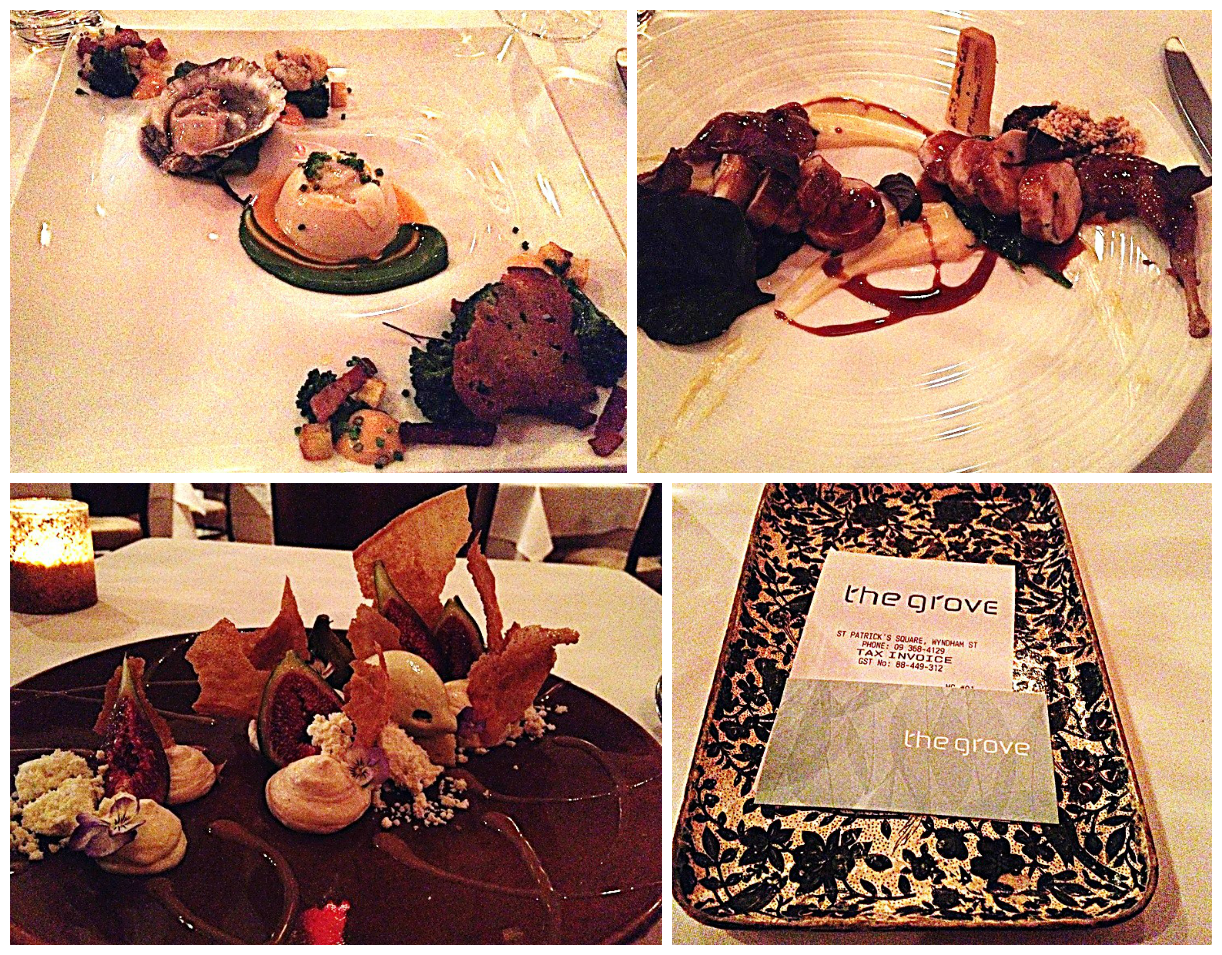 For a split second before her answer, I feared she might be point out some chunks which were hiding in plain sight and thus expose my blind inanity, but she chuckled and cooed "Sure, I'll show you" and then explicated that the chef had integrated the sweetbreads - a little touch of white - among the pink of partridge in those carnal medals. "So it might actually be a good way to get introduced to something like sweetbreads which one is a little fazed to eat
", she said. I disagreed - the sweetbreads had become tastelessphantoms as a result of this dragooning.

The partridge - may I posit - is a beautiful plump bird that better persuades thoughts of consuming it than chicken, or for that matter, bovines do. The main course featured its confited-'n'-roasted legs which were indistinguishable to my palate from another comely waddler - duck. But the medallions of its meat were surprisingly tender, dissolving in just a few bites though the latter ones amongst those eight discs questioned that praise. The associates were again superb - faultless pommes puree, excellent red wine sauce & indulgently creamed parsnips. Both Endives and Figs has been coaxed into profound softness and bathed with the fabulous body of sweetness that honey affords.

In fine-dining, I tend to distrust staff recommendations for reasons that are as instinctual as they are acquired. When Judica said the fig dessert came highly recommended, I wasn't thrilled to bits. I wavered, she responded sympathetically and hurriedly said "No, No...You can choose what you like..." but since she'd taken such good care of me, I didn't want to swim against the suggested tide.

That dessert ,I concede, had stunning presentation. But by the time I had thoroughly sampled all its parts, it reminded me of a lady who knows how to dress beautifully but doesn't know how to.......Anyway, the same plate's Brillat Savarin mousse was a consummate blend of cream, perfume and spice - a nice tribute to the man who said " Show me what you eat, and I'll tell you who you are". But the figs per se were boringly plain and no match to the ones in the main course, while fig-leaf ice-cream only had faintly amusing echoes.

The evening ended and inspite of key disappointments Chef Ben Bayley had hit enough sixers to provide hope of more promising horizons. I was keen to explore them with a 9 course extravaganza.

There’s that dreaded syndrome in which the part before the “interval” kindles great expectations and the part after, disappoints - this is especially evidenced in many potentially terrific Indian films. But in that particular category of cinema, you may have moronic producers, actors and even directors acting in the interests of marketplace caution. But in fine-dining the medium itself has full license to be militantly avant garde -Ben Bayley’s Grove adequately achieves distinction in techniques of cooking, but as he progressively showed me , he is yet to master the depth of flavours that remunerate the taxations of fine-dining. 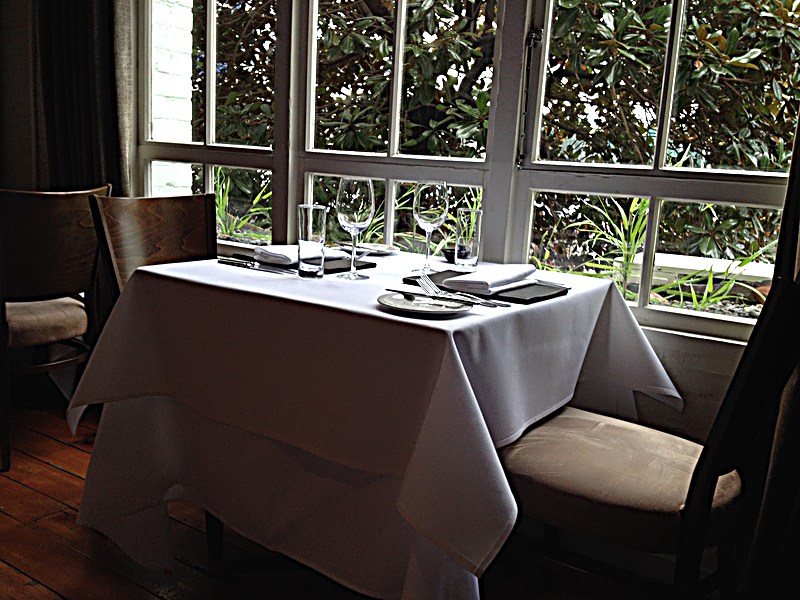 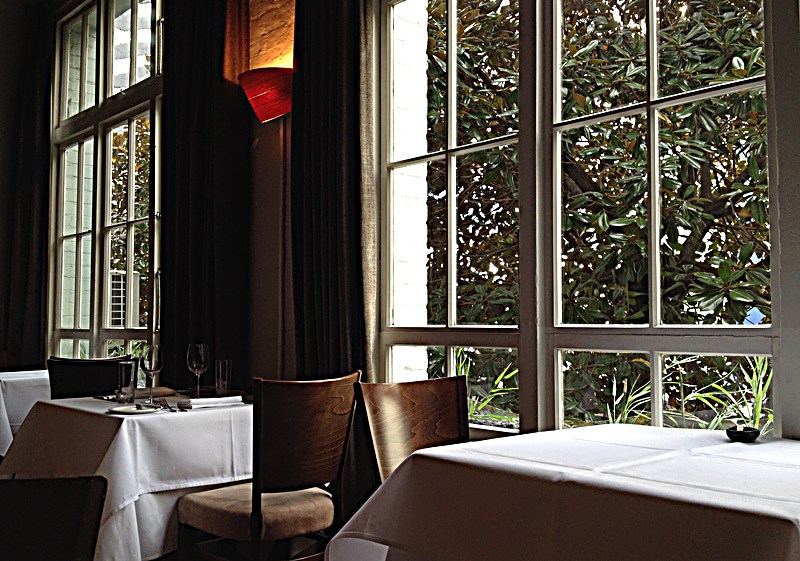 Pete Wells of NYT served up in 2014 a delectable review of Jean Georges - a stalwart star of NY - in which he proclaimed the untramelled audacity of a spicy squab dish - but here in NZ you come across, with frustratingly common frequency, a pigeon-like pusillanimity in conveying flavour. That afternoon in Grove, the continual parade of hushed preciosity and persistent shortage of intense flavour left us in a Sidart déjà vu. An amuse bouche of salmon tartare was served on a rice crisp: What is it with these frill-fangled chefs and lackluster amuse bouches? A French Fry, a Karnataka-style batter-fried cauliflower or Domino’s buffalo sauce chicken wings would have been any day better than this fancy-pants fluff. Terrines are hardly found in NZ - and the first starter was a neat long wedge of sculpted chicken and leek, with a cool leek quenelle sitting on the boot of this cut. This presentation was again, unfortunately, emblematic of our afternoon - technical flourish sunk by shallow flavours. 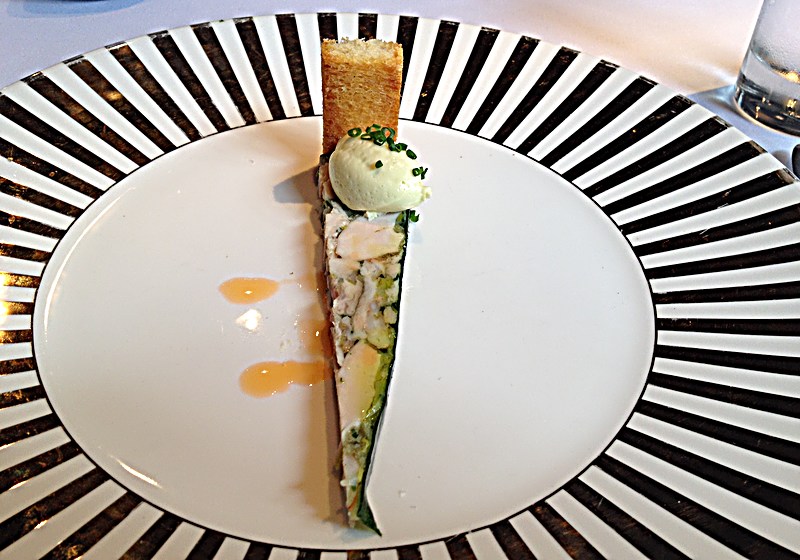 Pouring sauce onto the plate at the table-side ,no matter how many times I have seen it, lends an element of welcome theatre. Smoked Kahwai broth was poured from a pretty teapot - the liquid mirrored the colour of tea and mixed with the cream in the bowl, thereby changing the broth and giving it a pleasant hybridized fullness. Grilled kingfish nestling in the shallows was lightly cooked, with shiitake and onion giving a further umami smoke. ‘Twas a elegant way to nuzzle off the chills of winter. 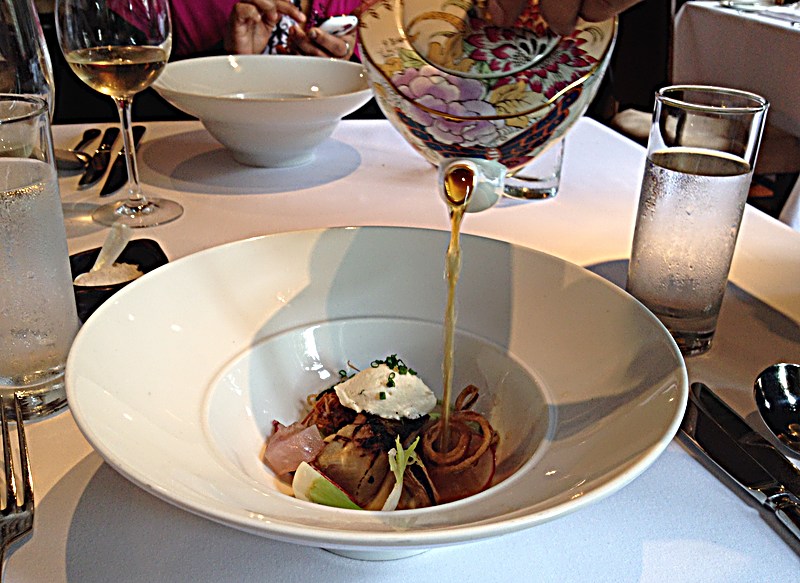 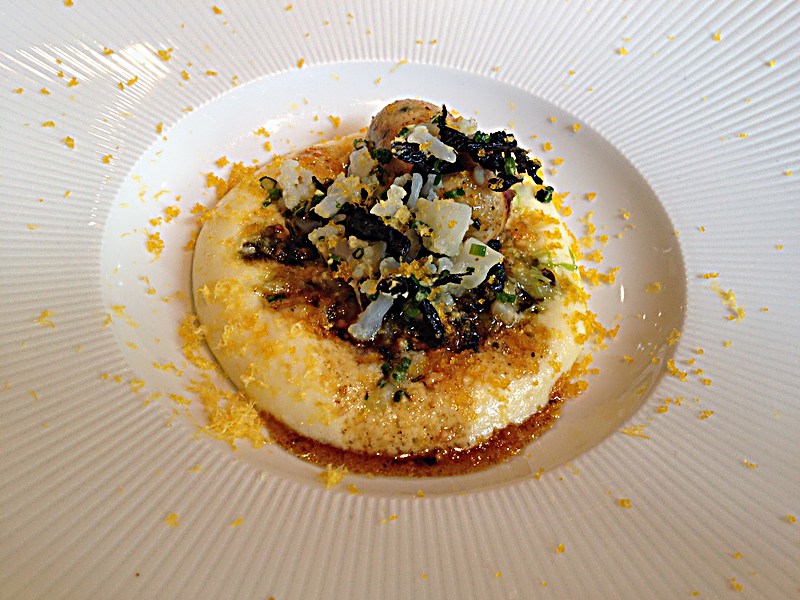 The expanse of yellow and the little blizzard you see atop it, in the above picture (potato, yolk, cauliflower so tiny you can’t taste it) didn’t matter. What did was the shy star of the dish: a petite sausage of crayfish and blue nose that was a beautifully mellow expression of tender shellfish.

While the service was smooth ,polite and reasonably efficient, it was not memorable. On the one hand, you have pricier restaurants which are able to afford a more vigilant staff that attend to your every need and make you feel like a pampered king and on the other, there is the element of charming, witty staff who perk up your experience with their eminently sociable personalities. Both of these qualities were sparse on that quiet afternoon.

The focus thus fell squarely on the food and Chef Bayley did a fair bit to meet the rising tide of our hopes. For his first main, he adopted the same strategy of my previous innings’ partridge presentation. Pheasant was rolled up into a unerringly cooked ballotine supplemented by luxurious associates - buttery potato mash, delicious red sauce, and vegetables rendered in a profoundly unhealthy but deeply satisfying richness. This is the sort of dish that mollifies you with its coddling rather blowing you away with its magnificence. But for his main meaty romp, Chef Sean let sex appeal score over actual performance. Radical looks belied its unsatisfying flavour matrix. Venison was on the chewier side, its mineral tones doing nothing to enhance my opinion of this very lean meat. The hay was better left in the barn ,and the done-to-death decision to pair the deer with acidity of berries again bore no fruit. A sausage which herded venison, lardo di connolato, chicken and pork into a mashed little monster was overpowering in its gaminess and funk. But the beetroot strings were wonderful- sweet and constantly crunchy -like a magical lace of fruit. 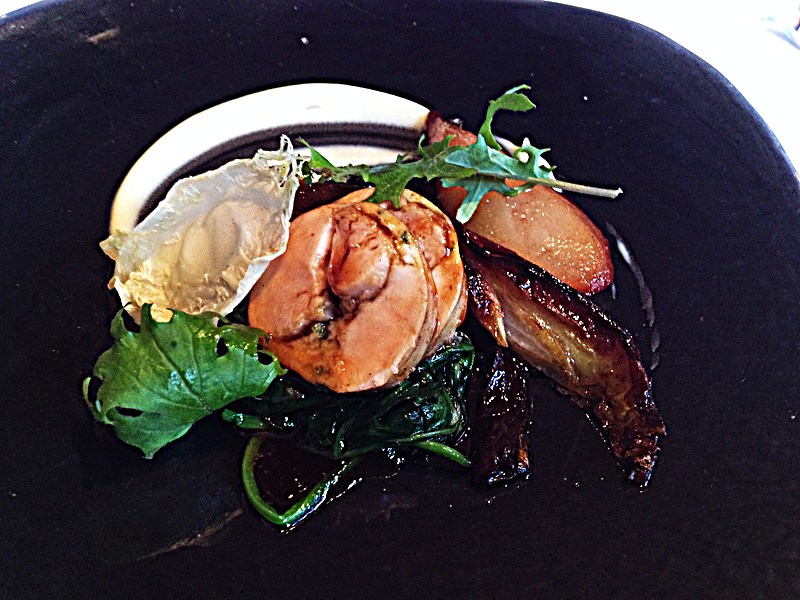 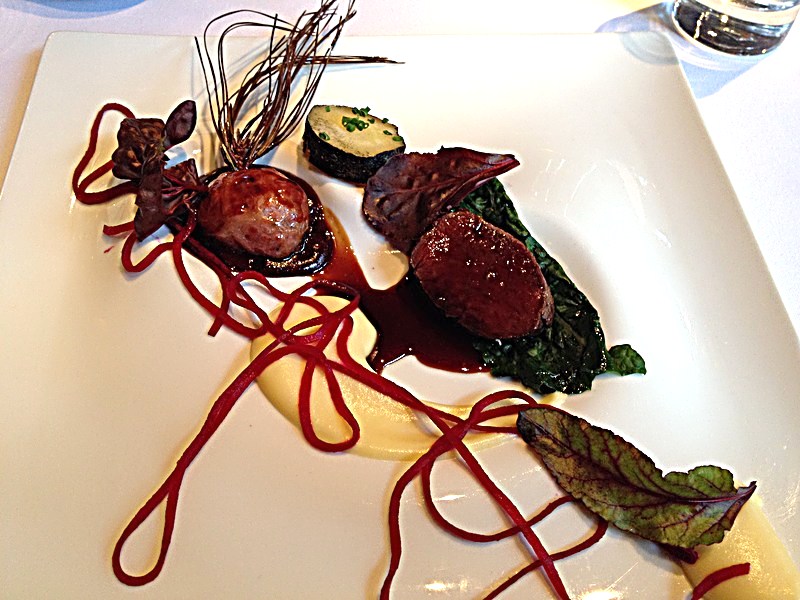 The Fate of Feijoa in a lot of this country’s restaurant desserts is dysphoric: our pre-dessert failed to better channel the tartness of this fruit. But taking the theme of sultry fruits forward, Chef Bayley dodged through the string of his debacles and eventually scored a gratifying goal with his next gambit -a superbly silken banana souffle, paired in happy tropical consonance with a cool quenelle of coconut ice-cream. The finisher was flamboyant and elaborate - a la the fig dessert - but its bounties flattered to deceive - the citrus was average and a generous sphere of 72% dark chocolate cream was too much of a good thing. 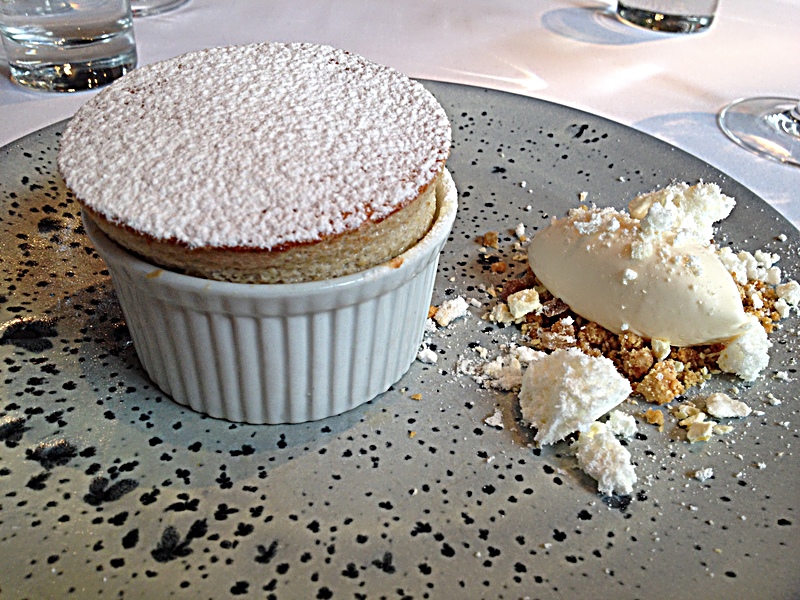 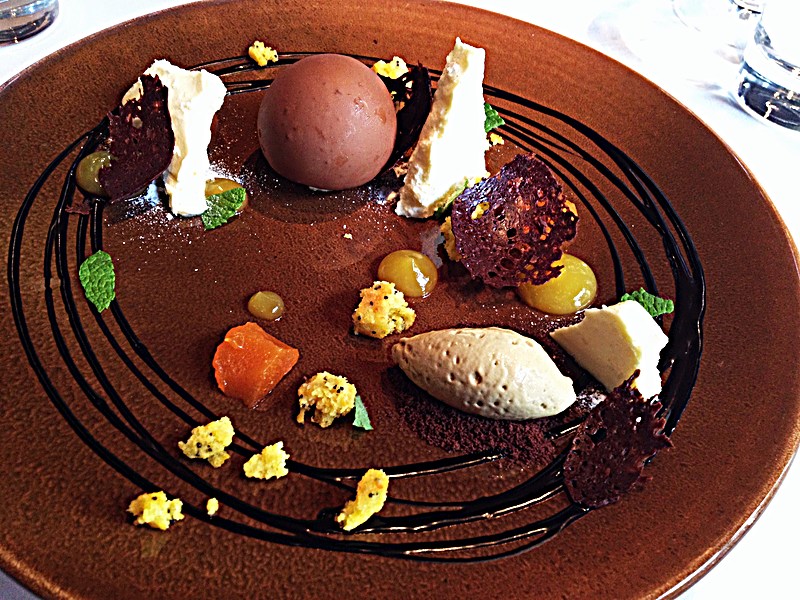 Technique here is indubitably on nonchalantly cool display but unless flat-out pleasure is factored into its elaborate mix, Grove will not find its groove.