An odyssey through Wellington's Downtown had radically revised my perspective about this domain, and I steadily came to regard it as an equal ,if not better, competitor to to its counterpart in Auckland. Moreover,the topography of this city's heart was certainly more intimate and sexier. With an aim to reaching my destination, a stroll through vibrant Cuba street ,jam-packed with cafes and food joints, arrested my interest. The sunny day, a grateful occurrence in this city's fickle weather, was taken full advantage of. A post-meridian affair in Logan Brown had been reserved , and was being keenly looked forward to. At this address,a Spanish-style building converged its contours towards its entrance, at which the red doors were opened about 15 minutes prior to showtime at noon.

I entered the grand dining space and was escorted to my table by a black-clad stewardess. A big spartan-style chandelier, surrounded sparsely by long sleek orange lanterns, hung from the vaulted ceiling painted in green and white,with its cornices baroquely etched. Smooth wood formed the floor, and chairs of green leather were set around shades of white, silver and crystalline glass that constitutes good ol' fine-dining. In this expansive room connoting European aristocracy ,I settled comfortably and munched on complimentary bread presented with butter and balsamic-olive oil. A 3 course bistro menu was opted for ( the restaurant website has a comprehensive menu listing with prices), with a plan to sample additional dishes to better explore the culinary delights of this much-lauded restaurant. My service was attended to a young pretty lady who was attentive and sufficiently concerned about my enjoyment of the meal. 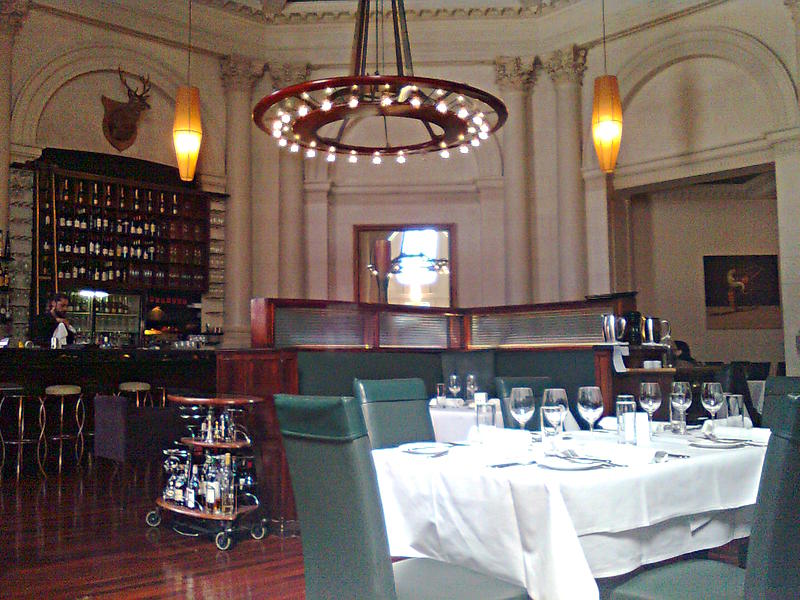 I went ahead to sample a glass of 'Man o' war gravestone' Sauvignon blanc ($18), touted to be 'full-bodied and oaked' - I was swayed by dreams of the first adjective! It proved to be as advertized, but was too bold an affair for my liking, although in retrospect I'm left wondering whether I should give more consideration to the mature specimens in my life. 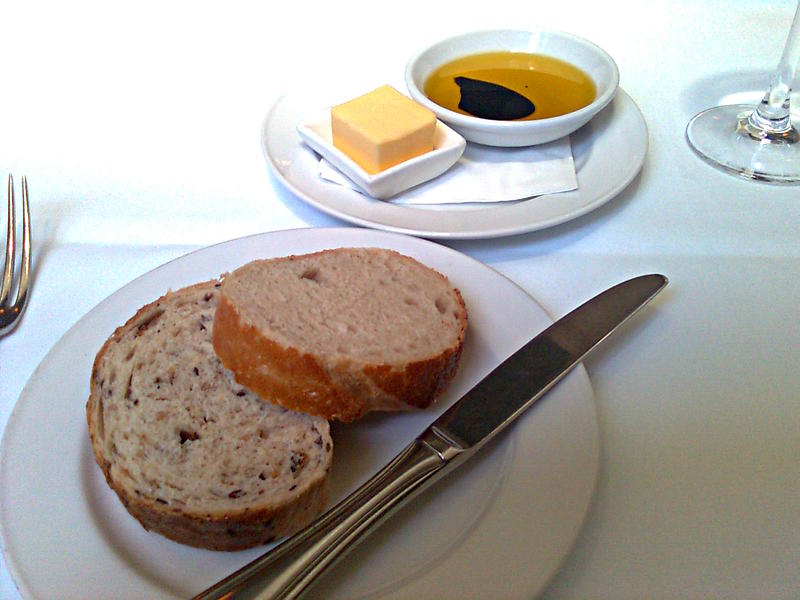 Often, the suspense pertaining to a dish's delights is conveyed by bringing it covered in a cloche, but here ,as in some other places, that theatrical element of shrouding the featured product is achieved by cloaking it in salad leaves and shaved parmesan, and drizzling it with sweet balsamic. This opaque garb was applied over Potato gnocchi. The gnocchi's flour-formed shell was beyond discernment while the filling was divine- buttery soft potatoes which melt in the mouth. Chorizo along with its fellow associates politely complimented the excellently cooked spuds while a couple of slivers of asparagus added vegetal freshness - an undoubtedly good starter overall.

Splendidly cooked fish constituted the first main: Crispy skin Gurnard .This marine marquee product had a wonderfully smooth texture maintained through to the very end - reminiscent of the finest plump pomfret from back home. The exterior, very lightly seasoned, was crisp as promised: with seafood this good one doesn't need oodles of extra flavours which the dish presented anyway with delicious almond aoli, smooth lemon spinach & tender-crisp baby potatoes. 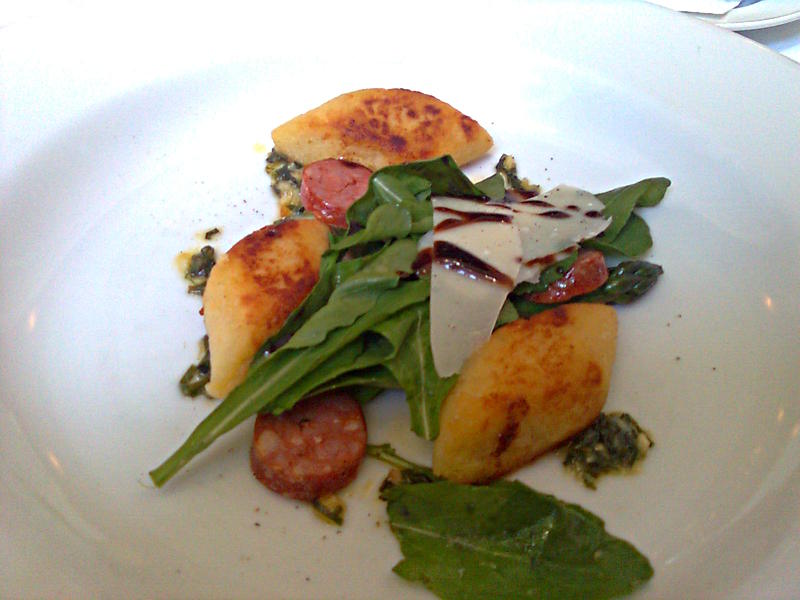 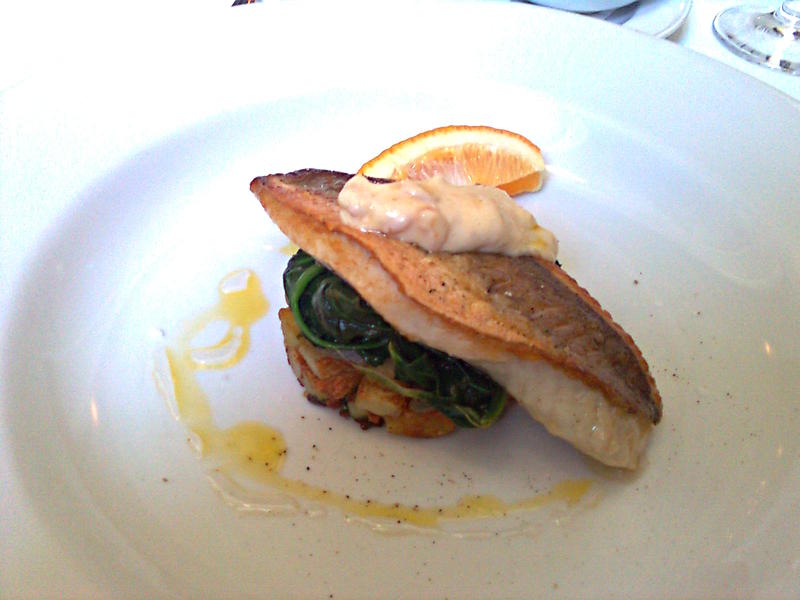 My waitress continued to receive excellent feedback (about the food). At this stage I asked for a a la carte main dish: Crispy skin duck confit with wild boar sausage, apple stuffing and cranberry relish .At NZ$ 48 for one leg and 59 for 2 legs ,this single selection of mine made a neat job of ruining any question of economy afforded by the $39.50 for the 3 course bistro menu. The kitchen at this point was generous enough to serve me a complimentary tasting of its signature dish: Paua Ravioli. A single ravioli of good dimensions, sprinkled over with crisp "sev" and encasing Paua (NZ abalone- sea snail) rested in a flavoured bath. Though the gesture of offering this dish was certainly appreciated,unfortunately I cannot attest to the merits of this signature presentation- the citrus notes precluded a clear enjoyment of the core flavours and its texture was not a triumph either.

The duck confit was superbly tender and an admirable testament to the benefit of confit-cooking.The inherently gentle flavour of the meat was also a very enticing persuasion; expertly mashed potatoes eminently complimented the central protein. I avoid sausages in fine-dining whenever I can but the wild sausage here came with the territory of the dish- its meat was cooked medium, had a distinctly chewy texture and little flavour. Matters slid further downhill with a stodgy apple stuffing, middling jus, and a redundant cranberry relish. A separate order of generously portioned oven roasted portobella mushrooms ($9) was completely pleasant, but a smaller serving and more intense flavours would have served their case better. 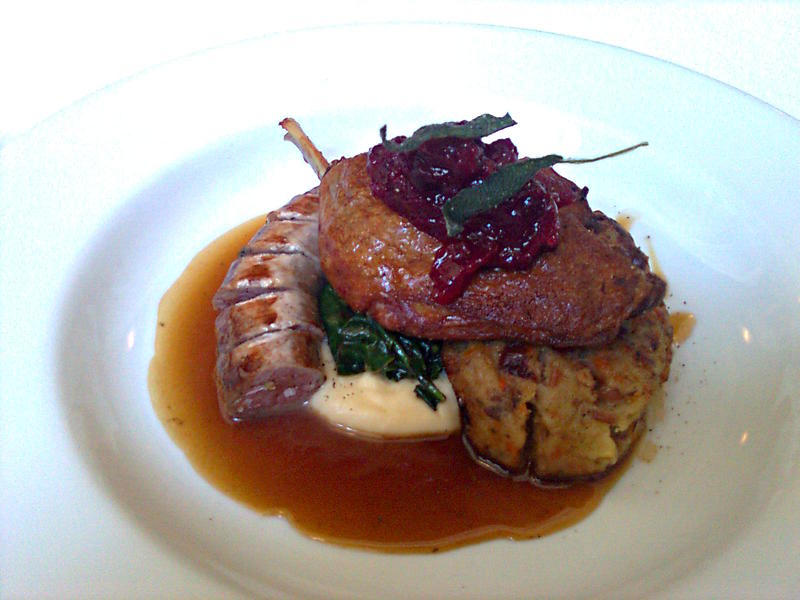 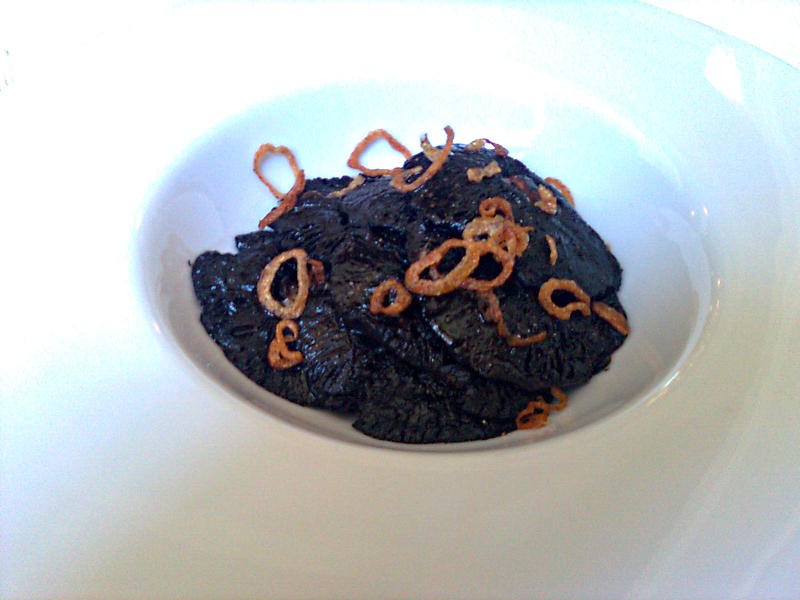 Service at this point suffered a significant hiccup- my hostess, sweet-natured and able to unearth and provide the majority of answers to the ingredients' mysteries, disappeared. She was replaced by another equal, but from then on there occurred lapses in attention due to inadequate staff. A bunch of them along with the bartender had congregated at a table at the far end of the room. Earlier, after seeing one of the waitresses seated at that table, I had been puzzled, wondering briefly whether the wine was exerting more than its initial effect. Upon enquiring, it was informed that the staff had been grouped up (apparently this happens 2 to 3 times a year) for an educative tasting of the restaurant's offerings. An eminently sensible exercise ,no doubt, to let the staff be enlightened about the details of the menu's treasures, but why this should happen during business hours,with service to patrons being shortchanged, beats me.

Delightful, perfumed concluding notes were thankfully orchestrated by the dessert - Orange blossom delicious pudding, poached rhubarb and pistachio crumble. The latter two components ,along with a small quenelle of cream, by themselves did not achieve any exalted purpose but when a part of all these along with central constituent were tasted together in one go, it gave rise to a wonderful medley of taste and texture. 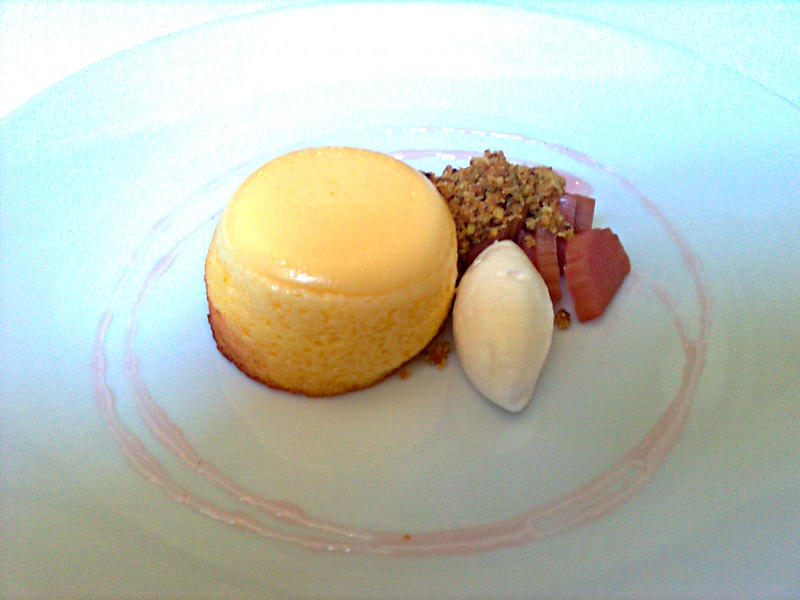 A young man, in kitchen gear minus the toque, came to my table and said with a smile that it was good to see someone coming in alone and enjoying a meal. On being asked if he was the chef, he replied in the affirmative -his name was Shaun. We had a brief chat and while leaving,he merrily remarked that I should go for a second dessert.

The device for accepting the 'eftpos' was not brought to the table here , as it is done in some other establishments. The service ended with gracious words being proffered by the staff. Since this place takes the trouble to keep a small hill of cotton towels in the restroom, it'd also be a good idea to take the overall look of that section to a more plush level. The dining room's main ambience was certainly a winner for me- old world in an eternal manner.

If I had just the 3 course bistro menu at $39.50 it would have been a terrific value-for-money meal ,with a strong temptation to accord a 8/10 for the food , nonetheless my overall experience was satisfactory and I would certainly have explored their tasting menu (offered on Saturday night as per their website) were it not for constraints of time and place. In a district choc-a-bloc with options for the culinary aficionado, one is inclined to conclude that this restaurant ranks as a bankable fine-dining destination to visit while in the capital. 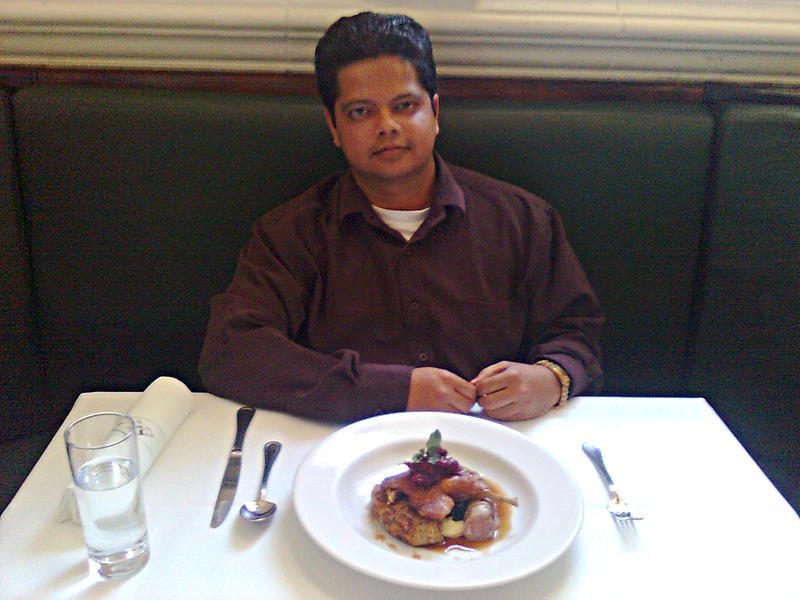 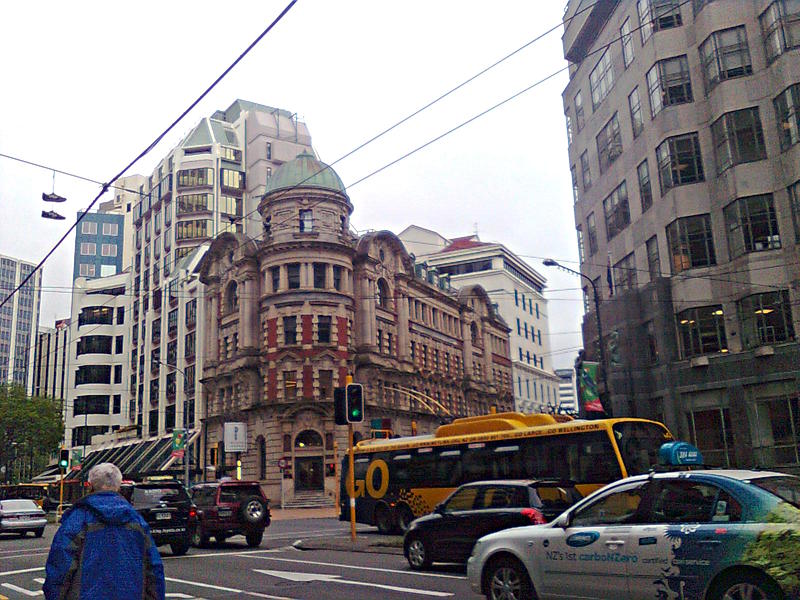 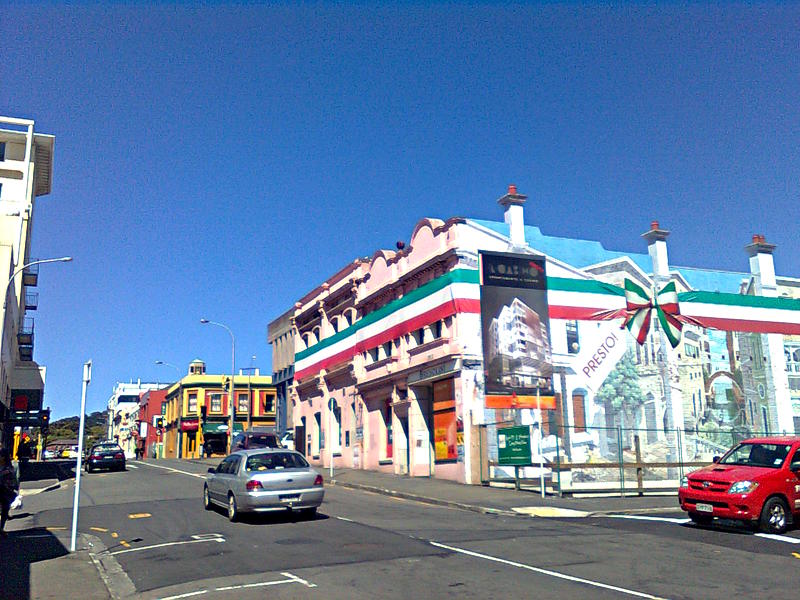 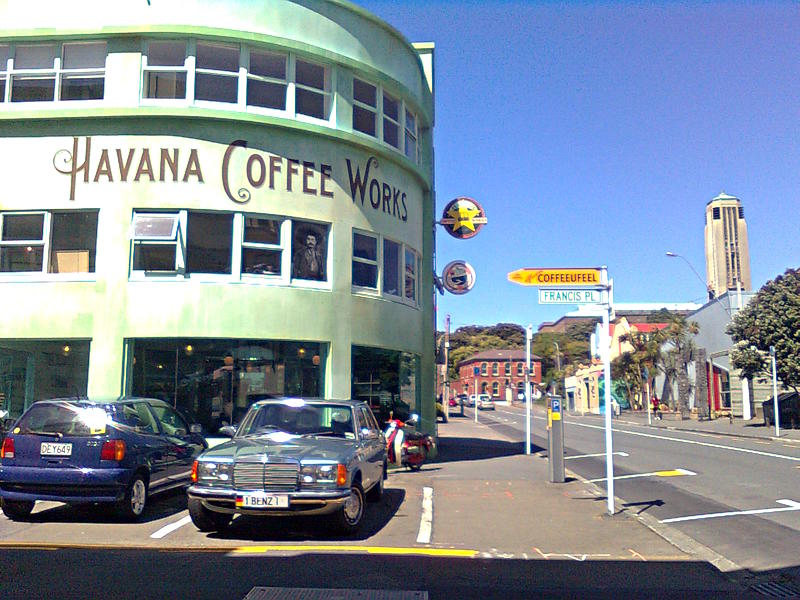