Pasture : Restaurant Review
2.75 stars out of 5 (Close to Good)
Auckland , New Zealand
Visited January 2017
The good news was that there was a new fine-dining contender in town, praised to the skies by well-known critics. The bad news was that the joint derives partly from the New Nordic wave which values trend over taste, and that the chef has worked previously in Sidart and Meredith's - two talented restaurants that in recent years have slipped into promoting surface and style over substance.
Pasture's Scandinavian-chic ambience is spartan (understandably more in keeping with a pasture than a riotous garden) and was pleasantly full with patrons in just the second week of them returning to open-fire action this year. The compact room has the kitchen set to one side, separated from the dining area by a counter, in what has to be one of the coziest all-in-one haute restaurant spaces in town. One can imagine a guest from any corner of the dining room communicating his compliments to the fire-side chef with only a moderately raised voice (Hey! Fine job on the lamb there Chef!) 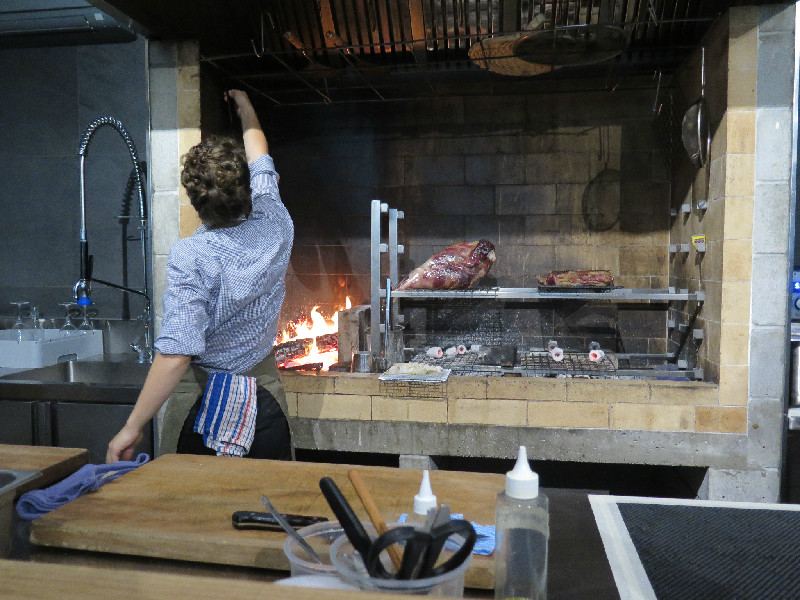 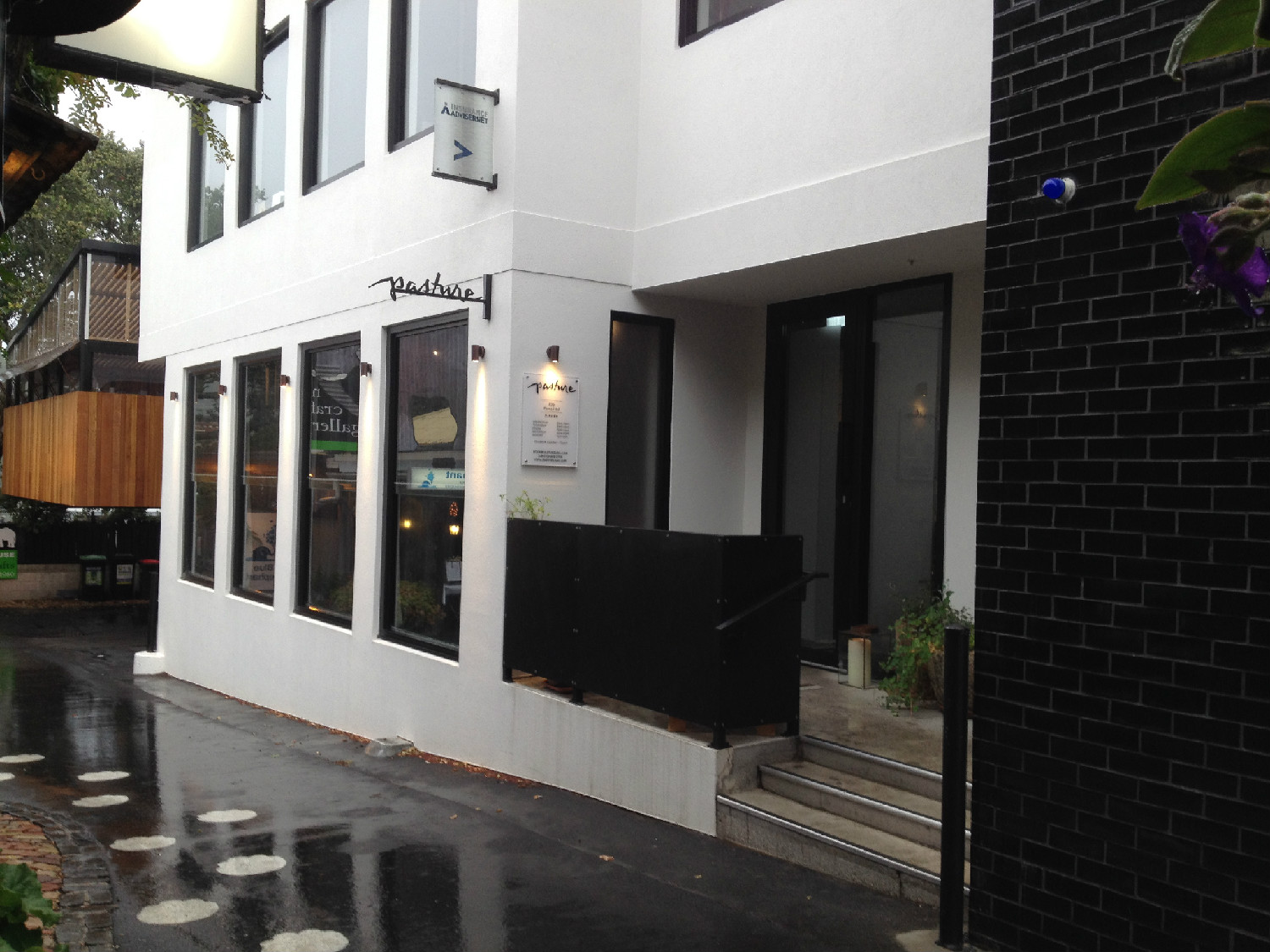 Chef Ed Verner certainly has a mind for distinctive dishes using few ingredients. Little heirloom vegetables are offered as a gesture of confidence in purity of produce, the wood-fired area with flames, sparks and cuts of carcass are a bold dark kiss in the face of traditional luxury restaurant spaces, a hunk of root vegetable is often simply halved, roasted with trimmings  and presented as a karmic doppelganger to meat, while the cherry tree is worshipped top to bottom by annointing its varied flavours onto a layered dessert. 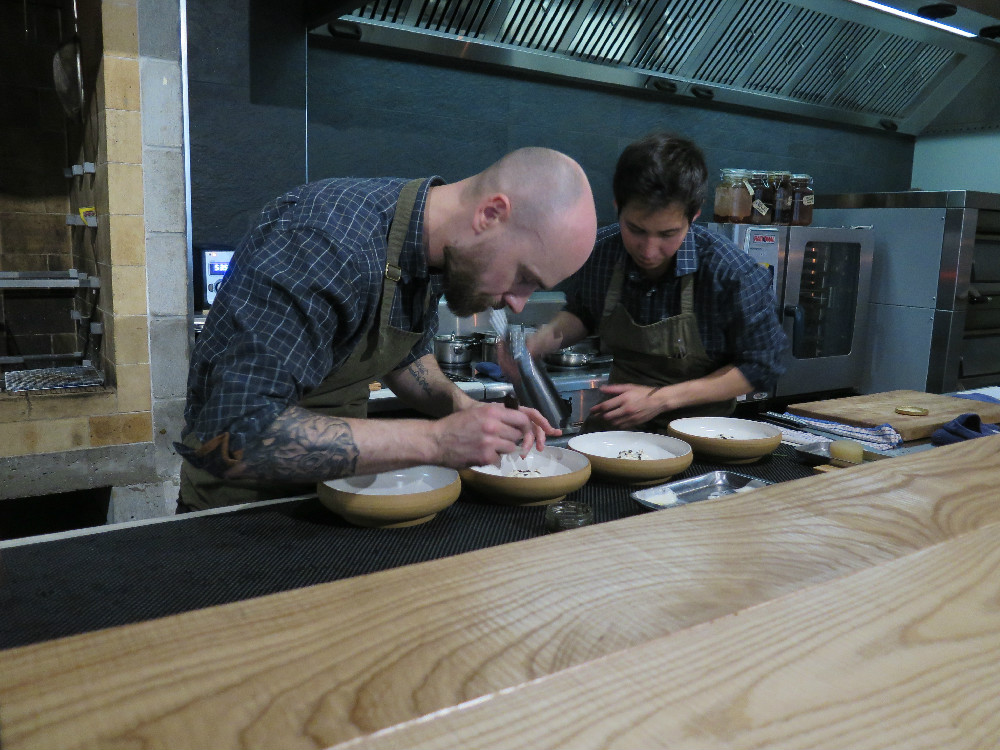 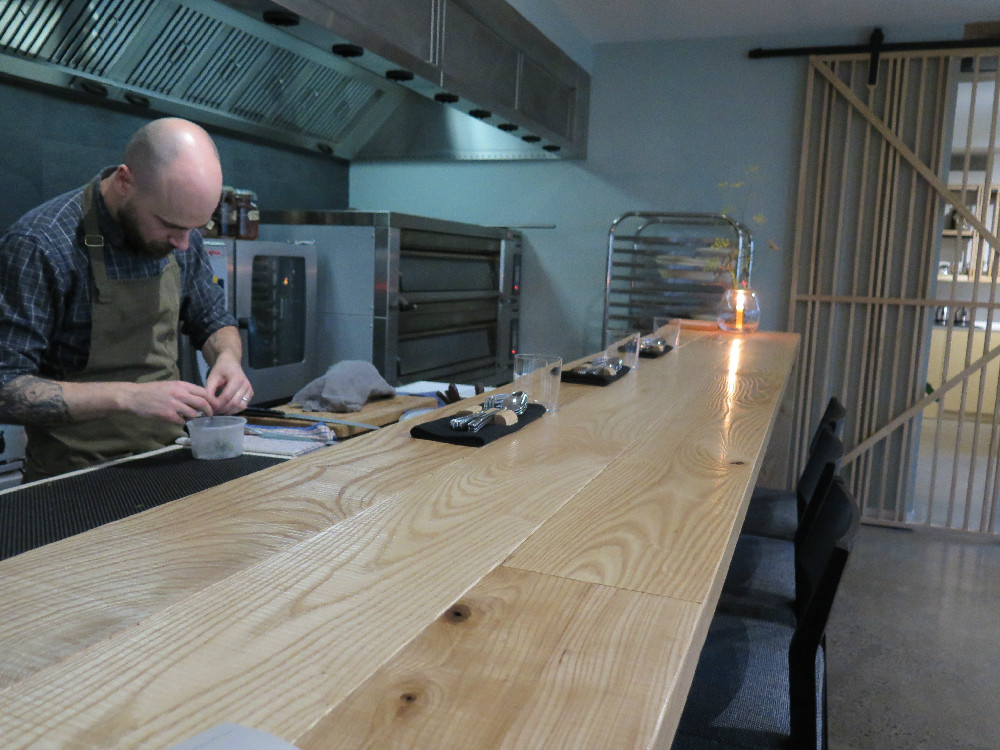 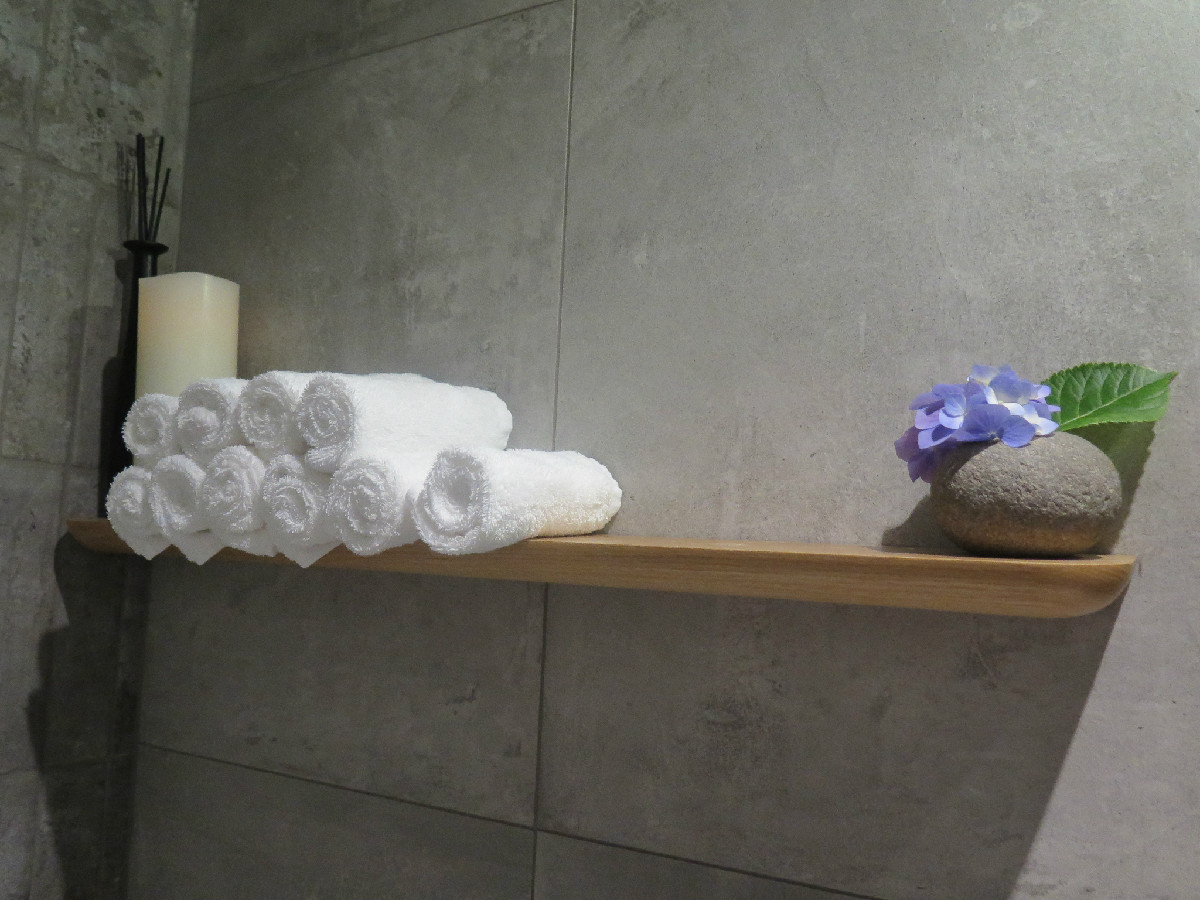 There is no a la carte here. The tarriff of $140 per person for the six course menu with three additional show-opening starters is well justifiable given Pasture is a serious fine-dining restaurant geared towards pleasing the patron. For those that still find this steep, it needs to be said that a place this will not be able to financially flourish with lower pricing (wine sales notwithstanding) - the price tag moreover is in tune with Auckland's haute-dining expenses. 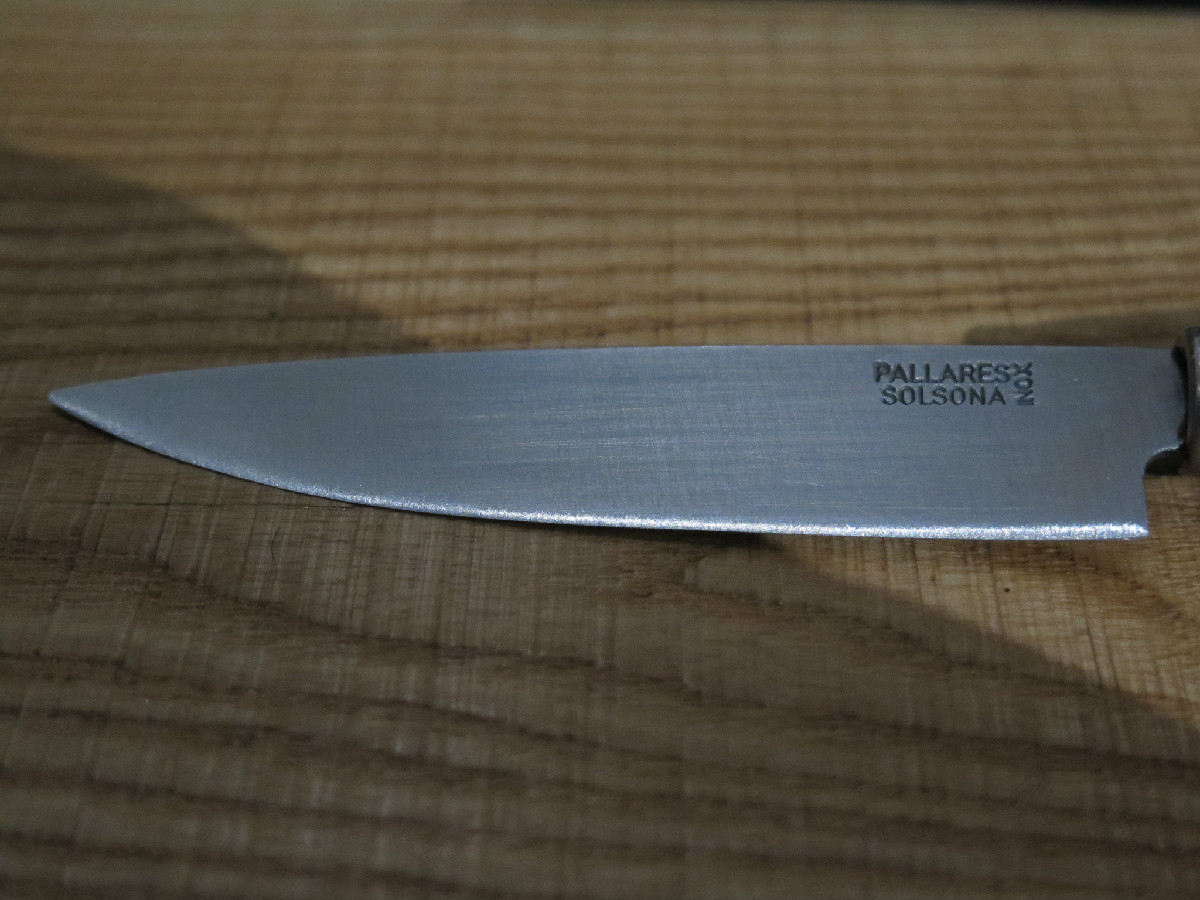 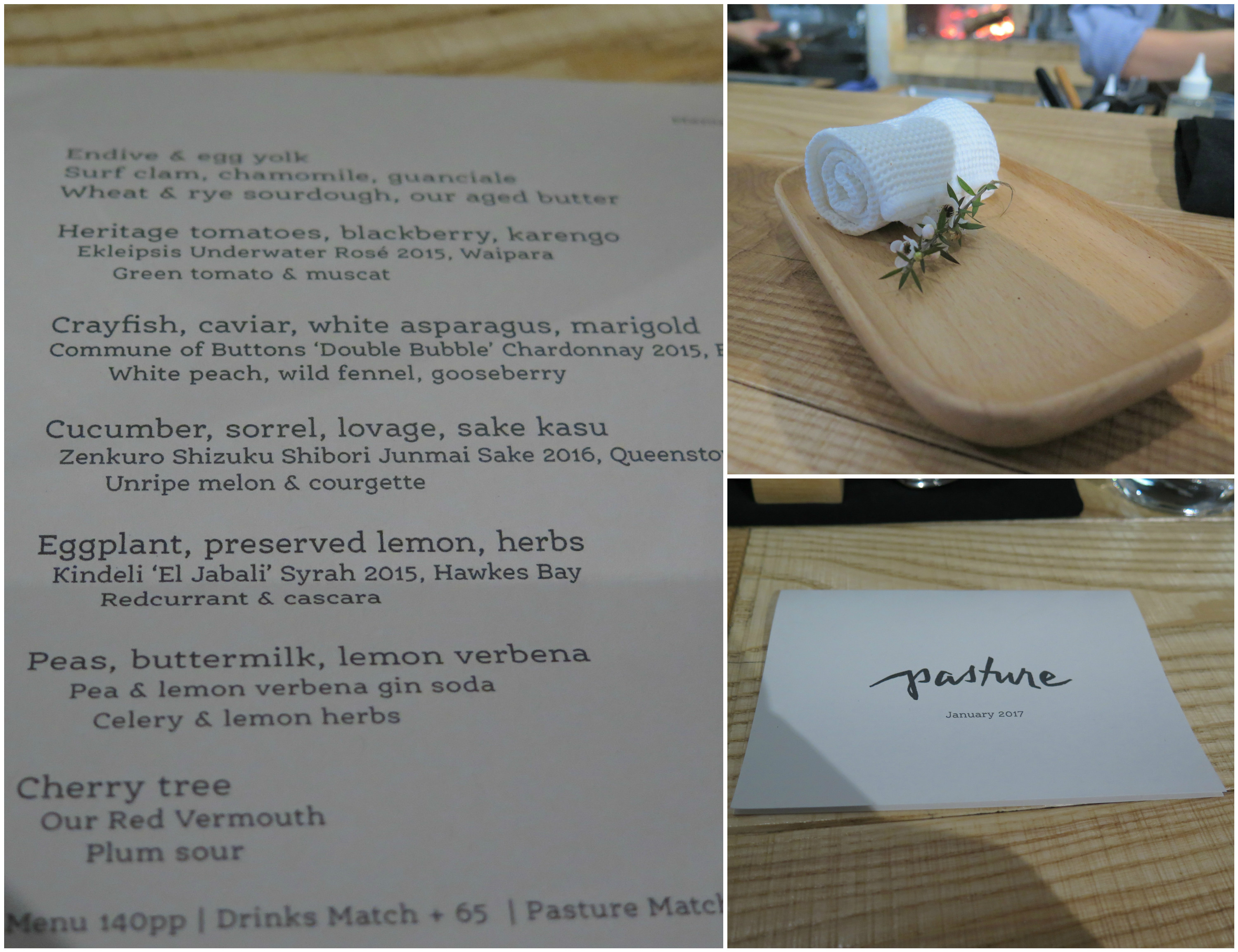 But disquiet looms, even in Nordic-Parnell's paradise. A presentation of cherry tomatoes , blackberries and  karengo (NZ seaweed) broth , heavily depends, by its very design, on the first ingredient sporting  oodles of sparkling flavour which unfortunately it did not have, continuing the sorry theme of fine-dining Auckland's lacklustre heirloom tomatoes.
Its successor was a luxurious treat - snow-white hunks of crayfish blanketed in white asparagus sauce. The quantity of that deluxe seafood was generous - more than double of that served in a dish from Merediths' tasting menu earlier this year. But the crayfish, for all its tender freshness, lacked that all-important extra touch of innate sweetness, further compromized by misguided flavouring. The white asparagus sauce was cut with tartness which hid the actual flavour of the pureed vegetable, tiny flecks of caviar again added a sharp twinkle which was already present in the sauce, and the juice pairing of an excellent white peach and gooseberry blend, also sported an acidic flourish. The dish needed just one acidic element - it actually had three.
Coming to that juice pairing, it is another enjoyably distinct bonus of this place , thus fulfilling my long-felt craving to have a juice pairing with my degustation instead of wines for a change. Pasture's juice-mixes are concocted in-house by the same bright young lady who becomes your keen sommelier. Three of the juice-blends were flatly forgettable while the other three sported memorable personalities , starting with a raspberry and muscat grape number that had both sweetness and character. 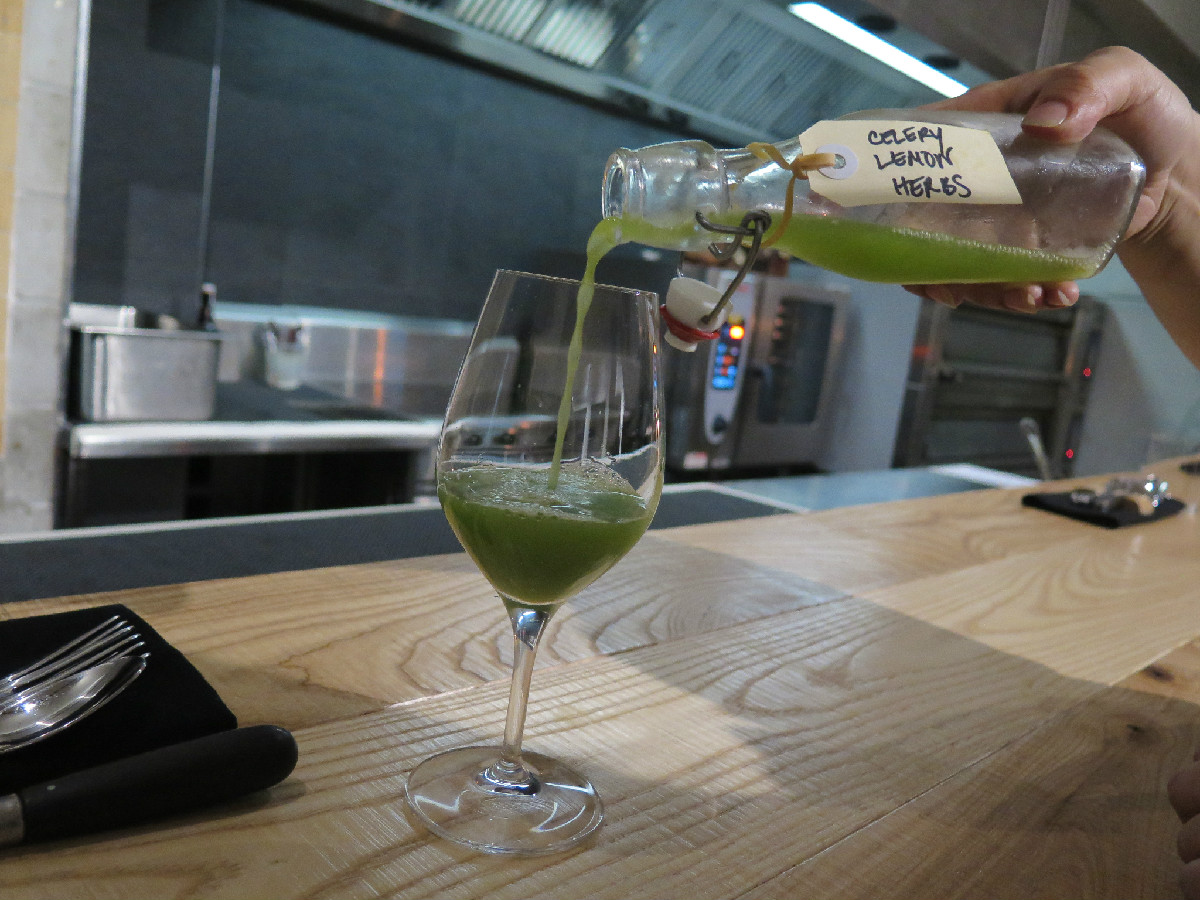 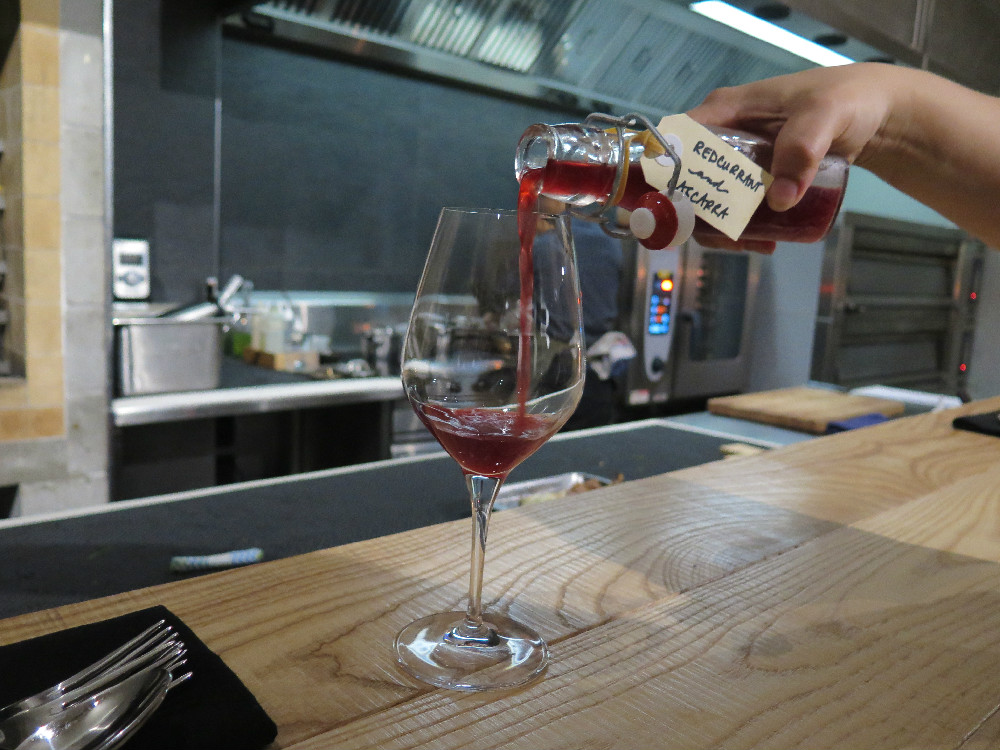 The wines are another feature where Pasture instead of following the cow-herd, invitingly wanders off the beaten track. "I tell people who like Sav Blanc to try our Chardonay and Chardonay lovers to taste our Sav Blanc", the sommelier enlightened me. My Pinot Gris choice of a 2015 'Matakana', left in contact with grapeskin for longer during synthesis, had a surpassing wave of smoothness matched by few of the usual variety I've had this year.
The wheat and rye bread, not only baked but also milled in-house, has been called the best in Auckland and it's certainly a strong contender. With a crackling appropriately chewy crust and a pleasantly yeasty interior, it becomes the complete satisfying package when slicked over with the butter they've cultured themselves (what now remains is for the cow itself to be cloned in-house). 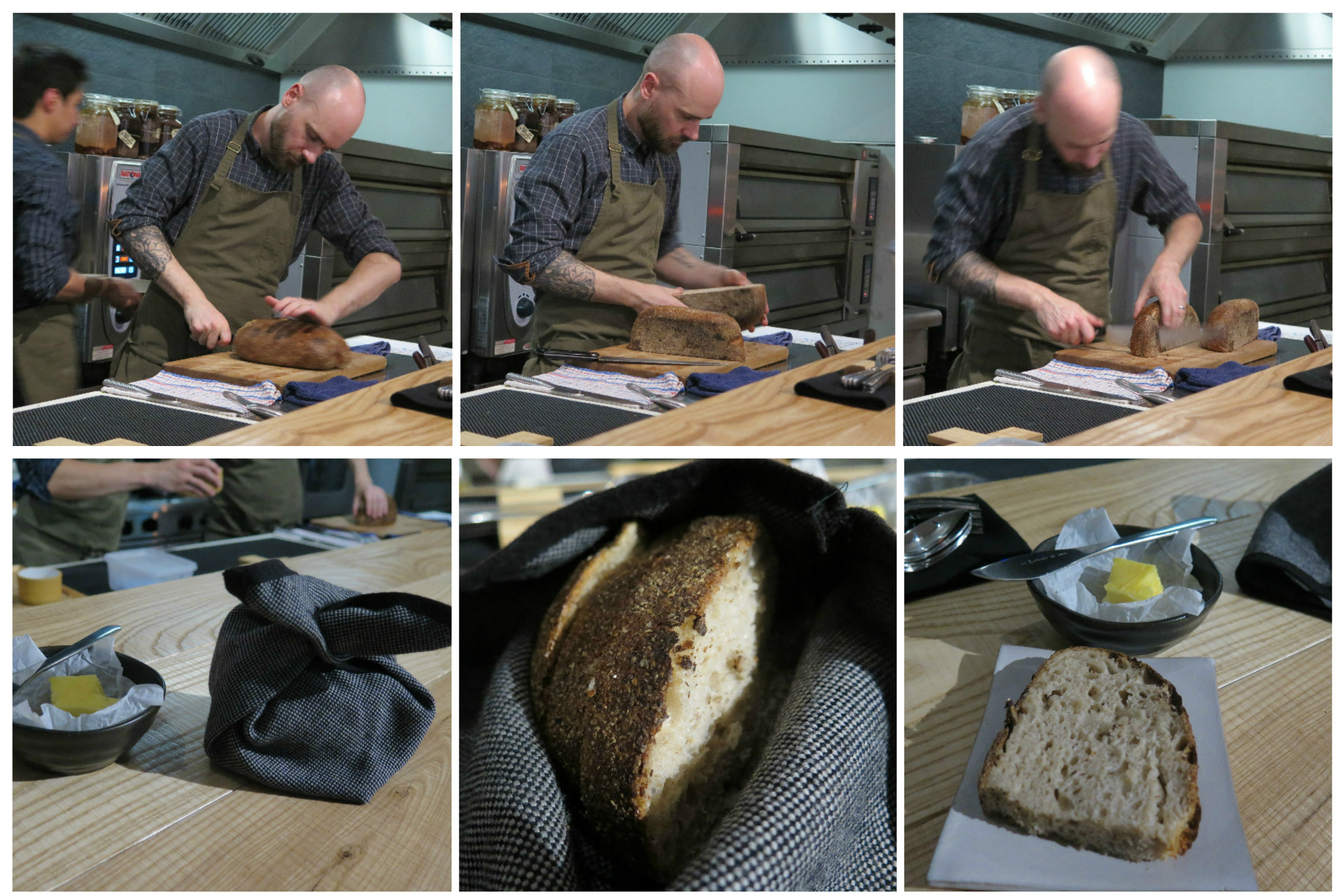 Pasture is perhaps the only fine-dining spot in town where you can have a counter-side cushioned seat, as I did, taking in every bit of the kitchen action at arm's length proximity as the chefs assemble the food on the plate, tweezer-adjust it, spray it with vinegar from a perfume bottle while roasting lamb hunks and cucumber and cabbage by the crackling fire while also fanning its heat. They pride themselves on the various cave-age uses they make of the wood fire and I admit it is more primally appealing than cooking on the stove, though you can sometimes spot wryly revealed signs of fatigue while tending to this strenuous heat-blasted activity. Chef Verner himself would reach over and present most of my dishes - a Noma tradition that deserves to be eternally lauded for its direct chef-to-patron connection. At one point through the bustle , he looked at me with a smile and asked "How are you doing, Sir?" - I appreciated his multi-tasking and concern while also realizing the feeling of being both inside the TV and outside. 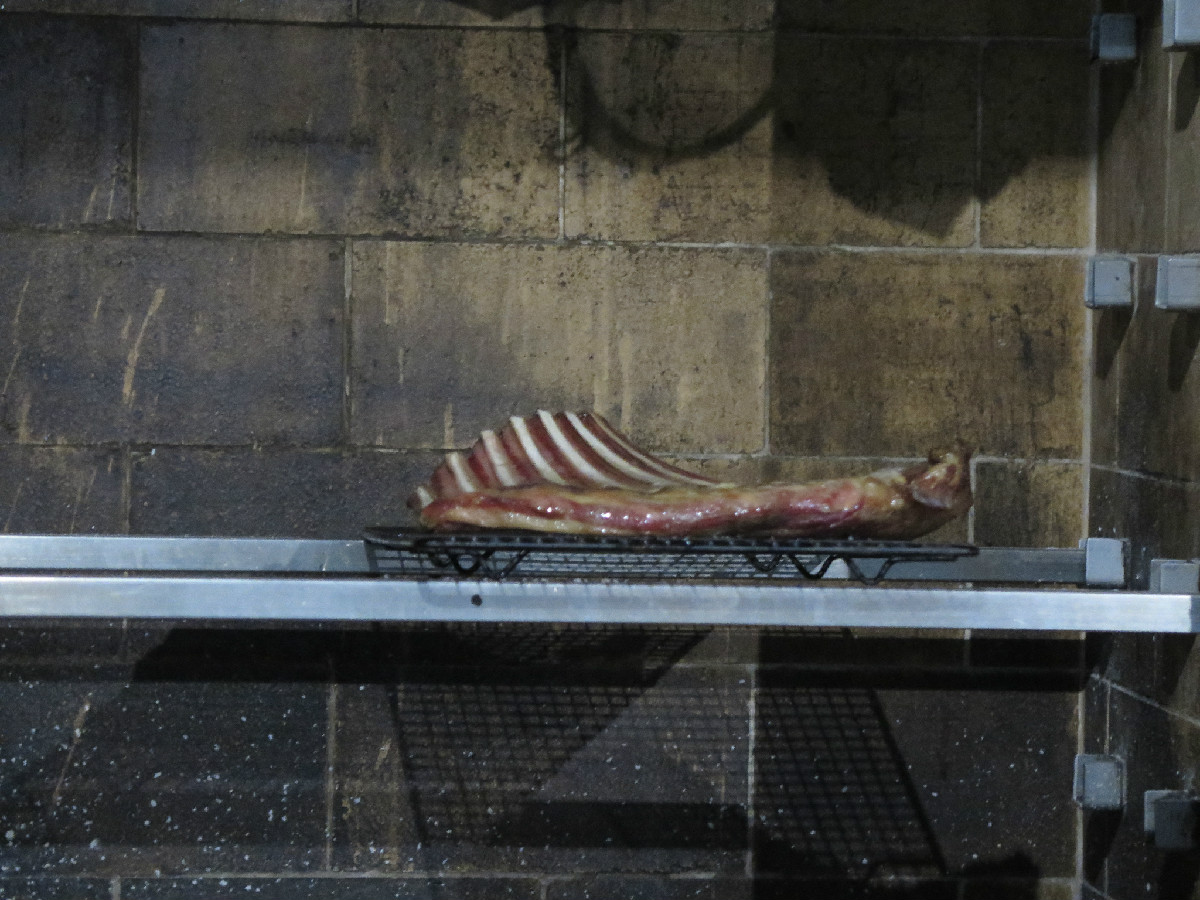 Hay-Smoking
The Law of Averages was eventually allowed to slam in before the main. Cucumber, sorrel and lovage were enlisted to form a dense heap of chlorophyll , that rather than wowing the tongue with vegetal zing, appealed with nutritionist-pleasing goodness. Like Mama's Boy, I scoffed it down, consoled that I had fulfilled my quota of healthful eating for both this day and the next.

Last year it was large cuts of roasted celeriac which Chef Verner had the confidence to present as a marquee feature, and this time it was another spheroid root vegetable - kohlrabi - a hemisphere of which was hay-smoked and presented as the main course. Its starch had been rendered to be agreeably tender, its earthy smoothness contrasted with smoke. The missing dimension of flavour was provided by the surrounding sauce - a beaut of herbal umami, with parsely blending into almond milk. Was it similar to Taranaki lad Ben Shewry's "potato cooked in the same earth that it was grown in"? I don't know as I missed a booking at his Melbourne 'Attica' , but I think Chef Verner's dish has the extra merit of being created by a Chef Cooking it in the Same Country that He Was Born In.
Desserts comfortably outclassed the savouries, in addition to being better complimented by the juices. A 'transition' offering of yoghurt granita and its freeze-dried disc provided beautifully refreshing contrast to underlying peas and lemon verbena cream, bringing back partial memories of a bewitching sorrel ice-cream tasted in Clooney's three years ago.  A nose-to-tail philosophy was transplanted to the main dessert wherein cherry wood and leaf were used to make whispering flavours of a white ice cream quenelle while actual cherries were channelled into the underlying intense dark red sauce. It was a cherry dessert for adults, distinct from the sugared cherries kiddies like. 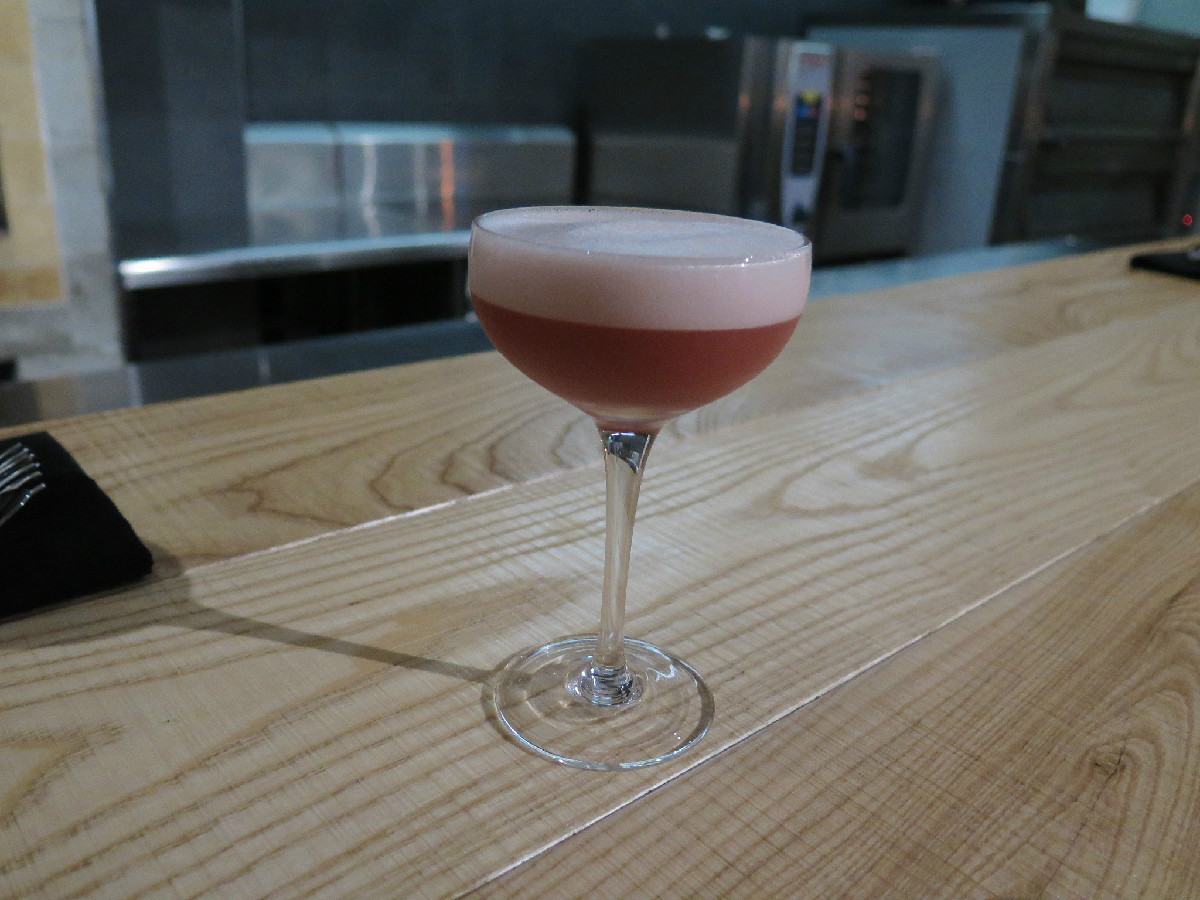 There is no need for Pasture to do any more of the "unique" things which are supposed to set apart one restaurant from another - it already has a distinct personality twice over. What would be certainly welcome is the resolve to create a cuisine where even if you blindfolded the patrons and told them to forget identifying the restaurant and just taste the food so they could focus on the flavour and nothing else, what graced the palate would so move it that they would then declare it to be the loveliest, deepest flavour that any pasture could ever produce.
UPN
UPNWORLD welcomes your comments.