Statutory Warning: The following has been written in the form of the only blogger-style serial progression narrative I've ever written. I despise that method or rather the lack of it,and have never adopted it again.

Update 2014 - Caperberry, after struggling on Dickenson Road to make profits, has moved to UB City ,B'lore and is doing better now.

My initial plan was to dine in this avidly praised Bangalore restaurant in the immediate euphoric aftermath of our cricket team’s great 2011 World Cup victory, but Caperberry was hosting an Italian food festival (at least a week long) at that proposed span of time,at the end of which I had to leave dear ol’ Bengaluru for a long hiatus.But the afore-mentioned win is a phenomenon whose joy transcends later tragedies, extends over epochs and stretches into eternity, so I came back eventually for my tryst with this restaurant’s multi-course full-blown affair which is the considered one of the elite gastro-romps the city has to offer.


It is surprising that Caperberry is the only place in Bangalore popular for serving the cuisine of molecular gastronomy - this involves stunts like encasing flavoured liquids in quivering "spheres", using liquid nitrogen to make desserts of novel texture and temperature, employing foams instead of conventional sauces,and "deconstructing" classic dishes and cooking each of its components innovatively. Super-Chef Ferran Adria masterminded the legendary El Bulli (now closed) - the restaurant which ignited the trend of this neo-cooking. Now, Heston Blumenthal’s ’Fat Duck’ and Grant Achatz’s ’Alinea’ reign as the champions in this tricky category. But I wanted both classic excellence and modern flourishes for my meal in Caperberry. Would Chef Abhijith Saha succeed in proudly putting Bangalore on the world’s fine-dining map?

So one sun-baked afternoon, forgetting the fact that Indian cricket team was getting mercilessly pounded by the Aussies, I set out towards the one place that I’d have chosen over all the other restaurants in the country for lunch that day.

The Grand Non Vegetarian Tasting menu with 12 courses was the target of my adventure. Its primary cost on the menu was Rs.2450. That rate would later be garnished with a 25% tax. There is also a Vegetarian version similarly priced. An attractive a la carte menu also competes for your attention -one can peruse all of this on the restaurant’s well-designed website. The average cost for a meal for two from the regular menu is Rs.3000. Tasting portions,it may be clarified, are smaller than the regular menu’s dishes so that one can sample a wider variety of dishes in order to understand the length and breadth of the kitchen’s ability.

The following is a review of my experience....Please pardon its length. In trying to cater to those who crave the concise, I cannot deprive others who dig detail.

Ambience - Stepping off a busy plebeian road, and walking into a big undistinguished compound ,one sees the restaurant’s signage "Caperberry- Fine European Cuisine and Tapas Lounge" mounted above the wire grill which houses a transformer. Walking into the plain atrium on the ground floor of the building and seeing the restaurant’s modestly designed entrance, one hopes that the elegance missing outside will be found indoors. A hostess,noting my reservation,guided me to my table. The air is relaxed - a cool mix of tropical and temperate climes. The design is elegant but restrained - don’t expect here the full-throttle frippery of royally opulent restaurants. A large chrome grid of glass and green triangles is suspended from the ceiling. Black marble forms the floor, while the chairs made of blond wood and without arm-rests, are reasonably comfortable. The table-top arrangements are unremarkable, and the space between the tables should have been wider for more privacy. One side of the main seating area has glass walls with white latticed shades. A separate smaller domain marks the lounge for nibbling tapas and quaffing premium liquor.

Service - It’s good but does not pamper you out of your mind. Restaurants which are truly detail-obssessed go to the lengths of treating their patrons like kings, while here the service merely makes you feel like a duke. There’s a distinct difference between troublesome over-attention and tactfully exact vigilance- Caperberry comfortable avoids the former while not enforcing the latter. Nevertheless,the staff here do behave with graceful respect. My steward for the afternoon was Varun , a young man who conducted himself with the right amount of professional focus and sincere concern. Chefs Saurabh Arora and Sharad Rao operated the kitchen while the man himself- Senor A. Saha -was seen moving around attending to business and even giving an interview.We exchanged brief pleasantries as he walked past to chat with a nearby party. He evidently didn’t realize who the real dignitary was..

The Meal - I opted for a Cryo Signature Cocktail in form of a Mango Margarita (Rs.475) to kick things off. Cold smoke arose from the liberally portioned drink which had the ’reserves" waiting in a nearby beaker. It had an iced full-bodied sweetness ,cut by the rim of salt. Suitably "whetted", with a steeled stomach and primed palate,I got ready for the tasting course to commence- the Amuse Bouche was a melon spherification - an eggyolk-like shape placed on a soup spoon. The melon-flavoured liquid was encased inside a thin translucent skin. It tasted ,unfortunately,like a shy rasam. 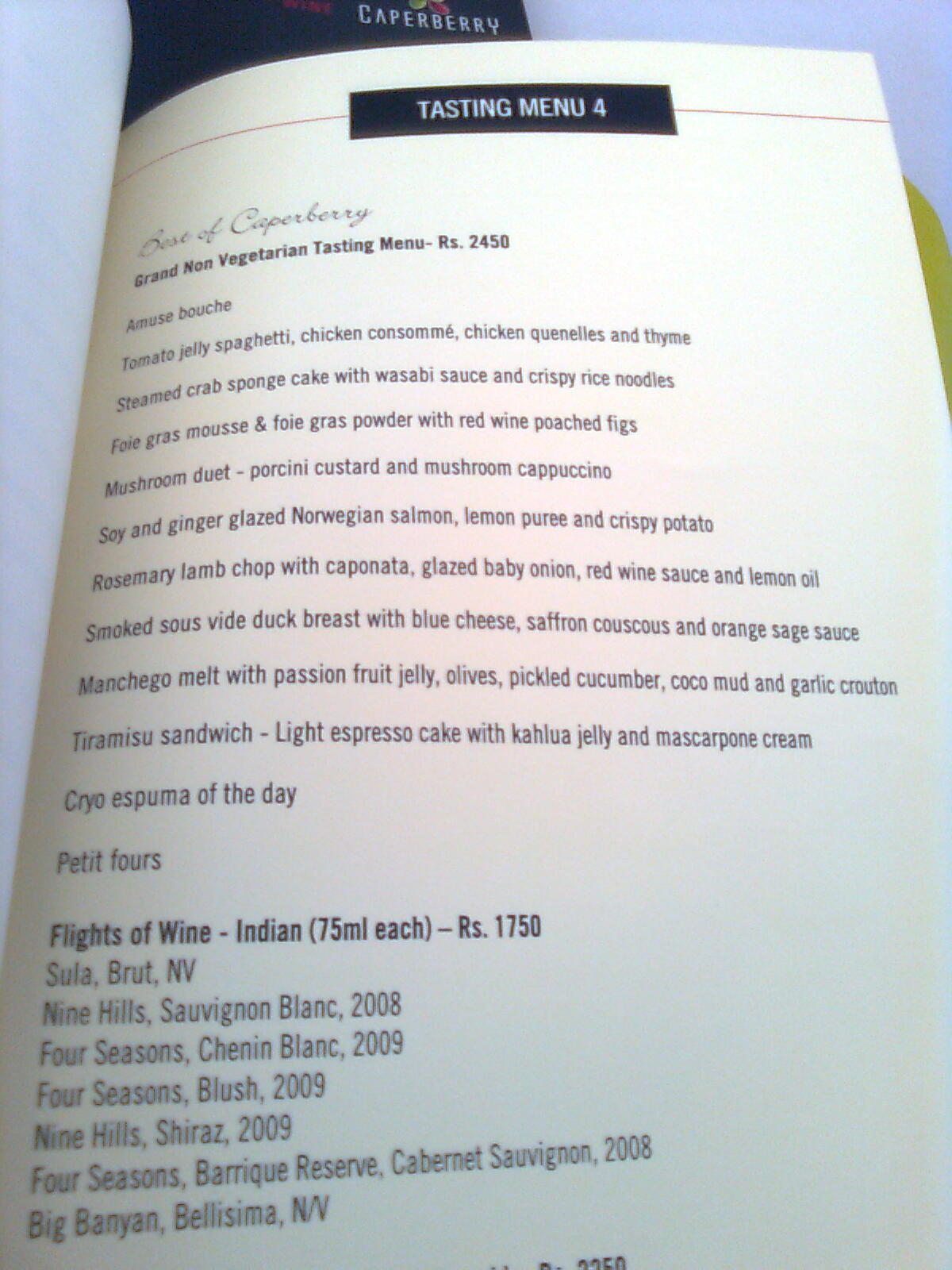 Next, thin tubules of spaghetti, actually made of tomato gel, swam in a chicken consommé topped by four quenelles of mashed chicken. The idea was to take the tomato sauce which usually covers the pasta and use it to make the noodles itself. But the dish lacked a developed sense of taste and remained just a technical stunt.

Steamed Sponge Crab Cake then endeavoured to make a tastier case. This carried only a scintilla of the star player’s essence, while the egg-endowed fluffiness was more evident. When this was used to sponge up the wasabi sauce, an agreeable savouriness arose minus the spicy kick. Fried rice noodles added crisp bite.

Course 4 - Foie Gras Mousse in petite swirled layers and foie gras powder sprinkled like a snowfall, evoked a parmesan-cheddar redolence and were arranged over the sweetness of figs cooked in red wine. A salad’s foliage was added to undercut the richness. Like the previous course this one too could be polished off without the risk of fantasizing about it later

Before the trio of main meats- Mushroom Duet- I had several sips of the Mushroom Cappuccino before wryly noting that if this was indeed what it was claimed to be,then I must have unknowingly tasted Cream of Tomato Cappuccino and Mulligatawny Cappuccino before in my culinary odysseys. A faintly mushroom-scented froth which topped the drink did little to justify the name. Its neighbour was more coveted- intensely smoky porcini mushrooms packed a real umami hit , enriched by caramelization. The custard below had a milder flavour and when both were tasted together, the latter swirled around the former creating a gradation of taste and texture.

A palate cleanser was served by way of a Watermelon Sorbet- ’twas cool, refreshing and adequately served its purpose. All the heavy hitting had been left to the middle order. Would they deliver?

A fillet of Norwegian Salmon was roasted with soy sauce and ginger. Both Scandinavia and China did nothing to shame their respective domains. The accoutrements were a cheese-laced lemon puree and small circular cuts of what looked like banana chips but which were actually fried potato. I soon started the fairly enjoyable practice of tasting triple decker’s of potato chip topped with salmon crowned with lemon-cheese.

After chugging through valleys and plateaus, my pleasure-train now ascended the peaks of pleasure. The succeeding dish showcased some of the finest lamb that one will come across in a Bangalore restaurant. It was as tender as first love and almost as memorable. The sauce composed of red wine and lemon oil was superbly balanced with just a dulcet hint to balance out the savoury fullness. The vegetal component was caponata- the stacked slices of cooked brinjal, eggplant and aubergine could certainly have benefitted from more finesse and less of the hard skin, but a sauce-anointed spoonful of olives cashewnut and raisins synthesized a delightful medley of flavours.

The last main course presented Sous vide Smoked Duck breast,saffron couscous and orange sage sauce. To put it plainly, it was the tastiest aquatic fowl that has ever graced my tongue.''Twas a master-class in the sous vide technique which cooks the meat in a vaccuum-sealed bag- all the moisture is locked in. The final product still retained a fairly natural appearance, but it was far from being undercooked or rare. While the meat will not get a crisp exterior by this method, it had been coaxed into a textural state of carnal gentleness, and soft fullness of flavour. it’d have made a fine case for being the May Bach of Meats. Blue cheese offered fleeting suggestions of creaminess, and while the couscous by itself was unremarkable, when it was sauce-soaked and given peripheral presence on the same spoonful, it performed a midly amusing tap-dance around the duck. The perfectly blended orange sage sauce tied everything together. Jaunty strains of Spanish music played in the background and I found my head nodding in contented rhythm with the festive notes. Varun coasted by and asked 'Do you like the dish, Sir?’ I have to hand it to him for making a solicitous offer that one can't refuse.

These last two mains were like polished centuries by Kohli and Raina. Happy and hankering for more, I wanted the tail too to wag...

As a bridge to dessert, the next course served was Manchego Cheese Melt with Passion fruit jelly ,olives pickled cucumber choco mud and garlic crouton. Many disappointing rounds of tasting permutations and combos later, I flagged down Varun and quizzed him. He replied that, yes, he was familiar with the taste of all the dishes and that in this particular one, he felt the cheese went well with passion fruit jelly and the garlic croutons..

Dessert - The Tiramisu Sandwich was a pastry comprised of alternating layers of espresso cake, kahlua jelly and mascarpone cream. It managed to become enjoyable after being slathered with the mascarpone cream which was spread around the central slice.

The theatre of molecular gastronomy then promised to perk things up after I beholded a vessel with cold vapours billowing out of it. A trolley drew up beside my table . Varun with panache enacted the role of the modern ice cream-wallah. From a jug ,he poured liquid nitrogen (at minus195 degree celsius) into the mixing vessel. From another contraption, a small dollop of cranberry-flavoured mousse issued out and this was dropped into the liquid nitrogen. After constantly moving this mass around in the 'smoking' pot, Varun fished out about 4 of these smoking-cold meringues onto my plate and I quickly popped them into my mouth. The outer shell was solidified but soft and pliant ,quickly giving way to the liquid swirl inside. This Cryo Espuma dessert was a novel joy filled with 'chilled' dissolving mouthfuls.

The very last offering was the 'petit fours'- 2 small units of a fruity sponge cake were served. They were tame and disappointing -I’d have prepared these myself after asking the chefs to take a rest. Having done all the hard work, you are still obliged to chart the finale by continuing to wow the customer. Even the coda has to crescendo- the kitchen needs to understand this.

The quality of my meal thus assumed the appearance of a bell curve. Those two splendid main courses still give hope that this restaurant is capable of serving a meal of consistently exceptional quality. Saha and Team put on a good performance that day but they have to stage a tighter show, a more dazzling display of talent in order to merit a truly world-class label. For me, it is heartening to note that such a restaurant of high ambition exists in my own home-town, which is why I will return to it with a renewed sense of great expectations.