Note : LikeThatOnly is now permanently closed. It did not last for long after our visit (I doubt this review had much to do with that turn of events).

Travelling 20 kilometres through the deranged roads, non-existent criminally culpable traffic police (and citizens) and crumbling ruins of modern-day Bengaluru made us sigh and concede that the city frustratingly conforms to the name of the highly rated "quirky" restaurant we were heading towards. 20 years ago, if you'd said "Whitefield, Bangalore" to me I’d have replied by uttering "Puttaparthi Sai baba" but this township has changed now and  it increasingly seeks to attract culinary devotion, with an expanding repertoire of 5 star hotel-based and stand-alone restaurants that aspire to serve sophisticated cuisine.

The area has barely assumed the infrastructure of a full-fledged city,  and it already smacks of urban degradation and civic indifference (not new to a denizen of this incipient metropolis) but our spirits were lifted on seeing the atypical decor and resolutely relaxed environs of the restaurant. The drizzle, dull diurnal light, the rather remote resort-like feel of the place and the South East-Asian theme of decor all do a decent job of persuading you that this is not a ersatz run-of-the-mill Bengaluru "hotel".This joint has been named by Times of India as the best Pan-Asian restaurant in Bangalore - as with everything peddled by T.O.I these days, you have to take that with a pinch of garam masala-tinged salt.  I was the first one to arrive that afternoon, and noted that the staff, though not hostile, are in no danger of blowing your socks off with their warm initiative. After making enquiries with them, a pleasantly colourful indoor location which included a cool view of the outdoor deck, was selected. 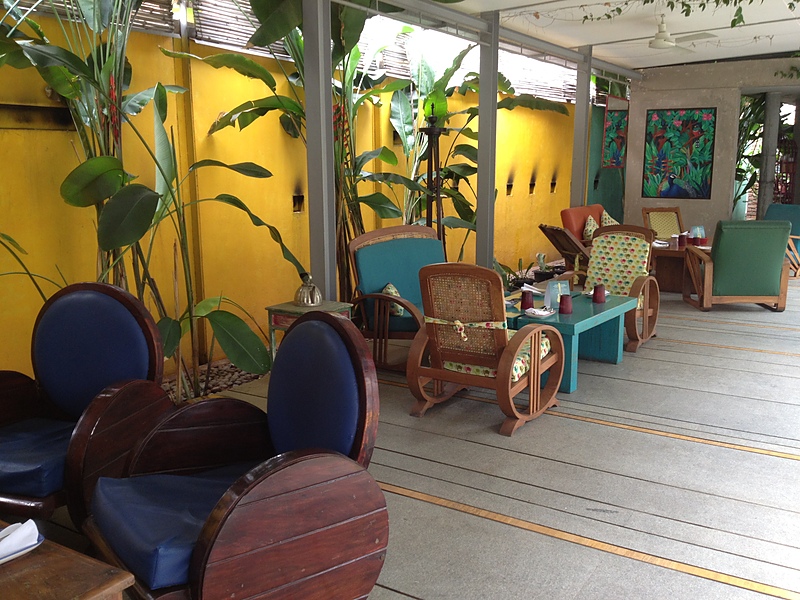 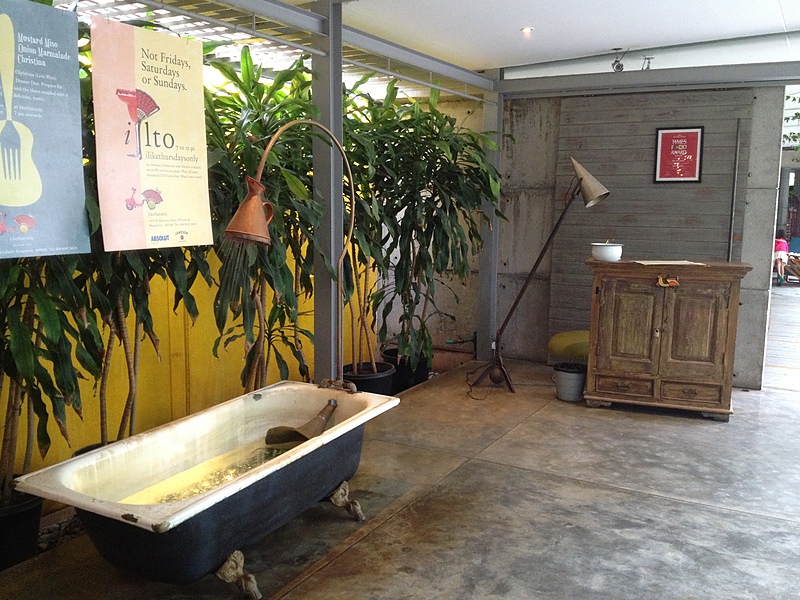 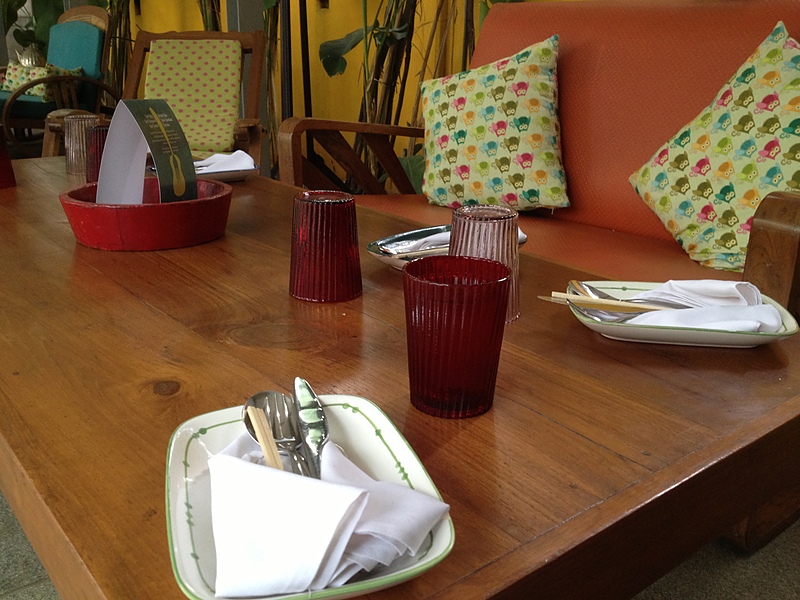 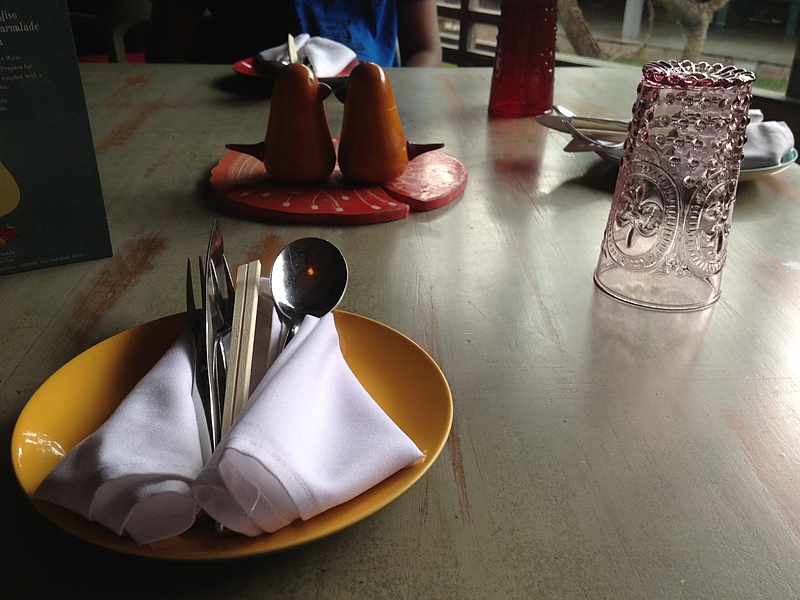 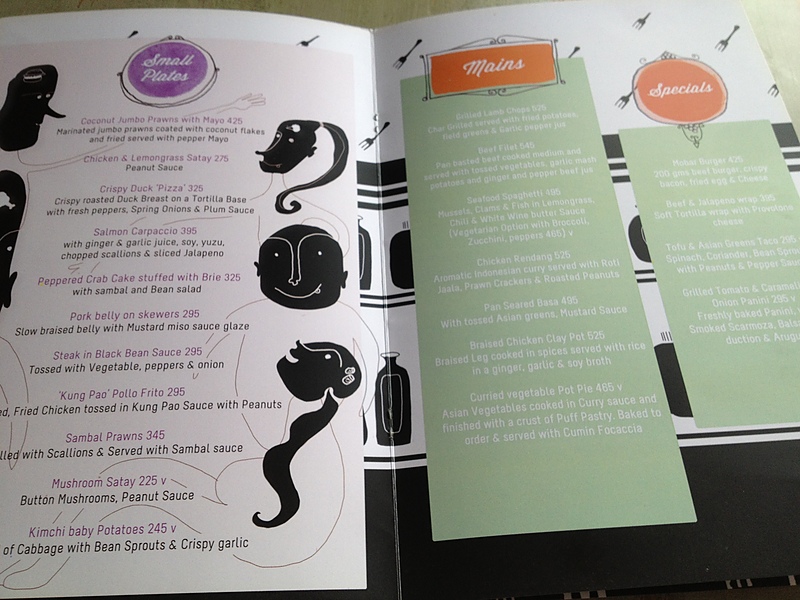 We started off with an animal that has been treated in India with a mixture of revulsion, indifference and sacrificial intent.  "Sooar ke bacche!" is a well-known Hindi film expletive, but this reference to porcine progeny notwithstanding, suckling pig is a rarity in this country. Tender pork in other forms still appealed to us and so Pork Ribs were ordered - these were excellent: the soft meat easily coming off the bone, while steeping in the rich barbecue sauce, with hints of herbal contrast from the sprinkled micro-greens. The much vaunted Pork Belly was a fatty caramelized hoot – the skewer had melting chunks alternating with chewy crunch. It may not merit a riotous recommendation, but it certainly delivers the unctuous goods, especially since it is smartly paired here with sharp riffs of mustard mayo and a vegetal counterpoint from a petite bed of sautéed spinach.

The place makes interesting drinks - if you bring your boss here and offer him the chilli-pomegranate vodka, he'll not be sure whether you intended to pleasure him or punish him/her.

Remembering the wonderously flavoured Kung Pao Scallops eaten in Lexington, Ky.'s  P.F.Chang, we ordered Kung Pao Pollo Frito with visions of again experiencing that sweet-sour-savoury blessed triumvirate that bathes succulent meat. However, what appeared on the table was a large serving of what tasted like Ginger Chicken, with token peanuts tossed in. Noticing our disappointment,the waiter voluntarily approached and offered to change the dish - we agreed but he later came back and asked whether we could opt for a different dish. The replacement - Sambal prawns - had a succulent zest to them, and the sambal, though it had a fair bit of spicy kick to it, did not smother the inherent flavor of that delicate seafood. The skewer had the prawns alternating with leeks – I’m not fond of leeks being used in this manner (a similar practice had been seen and tasted by us in Harima’s Chicken Yakitori) but at least here that vegetable was tender instead of ending up tough. 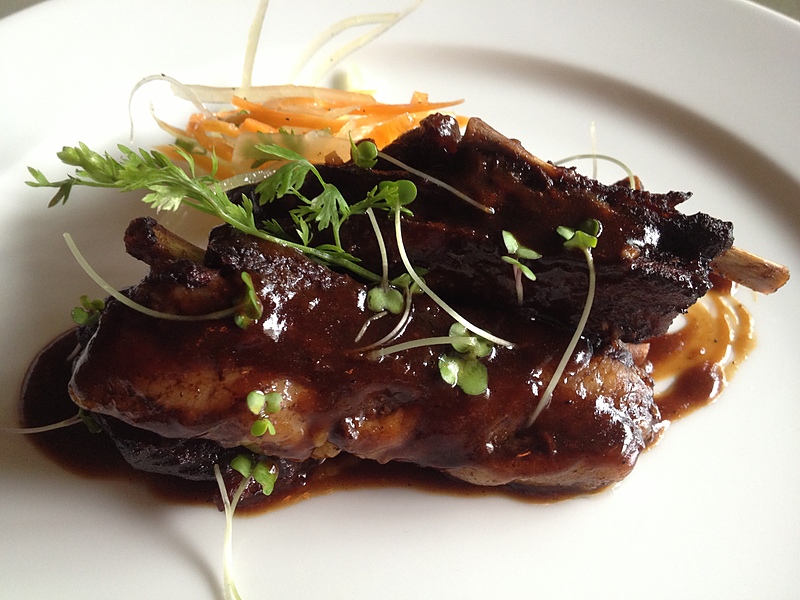 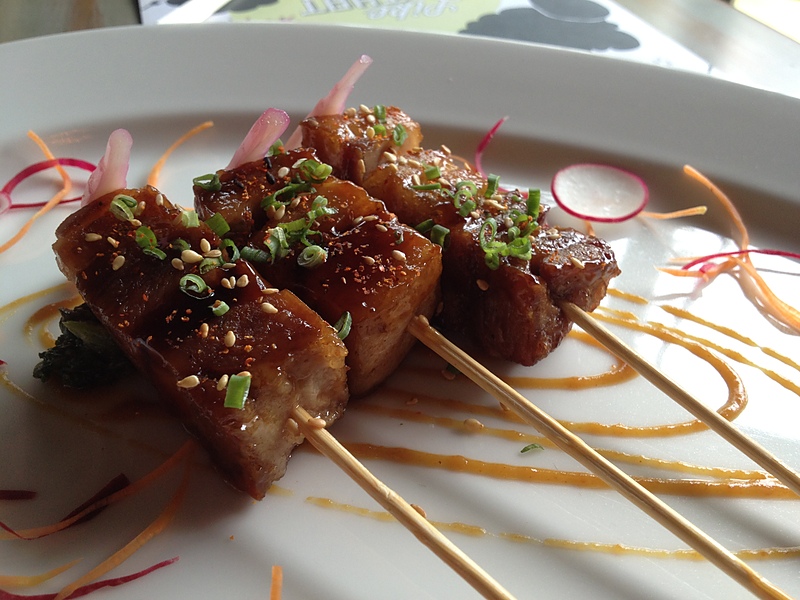 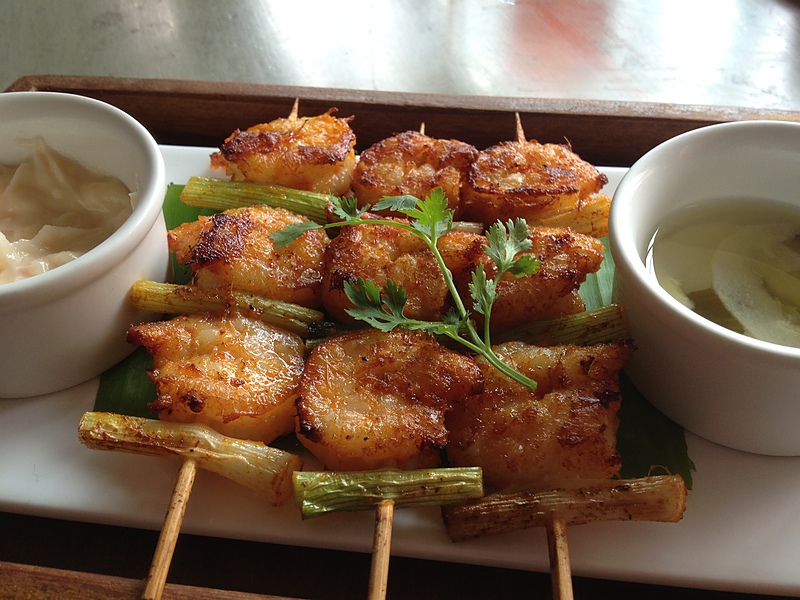 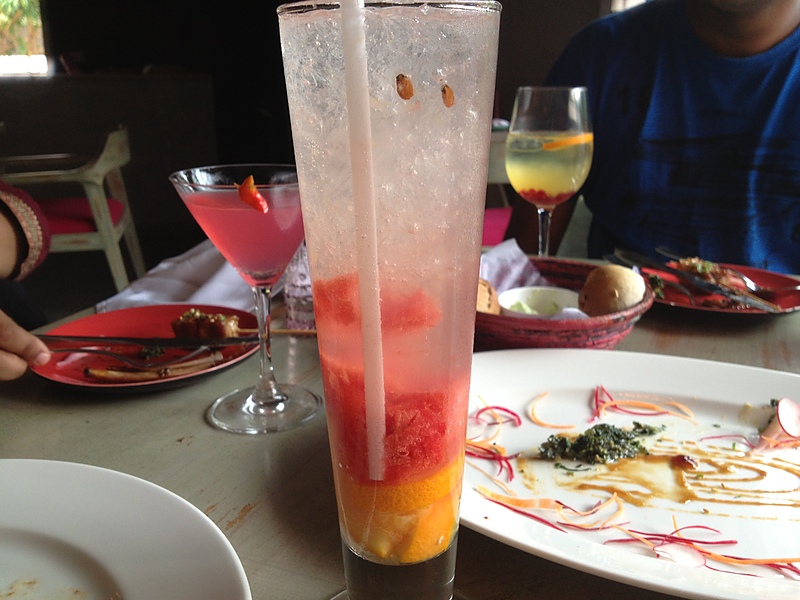 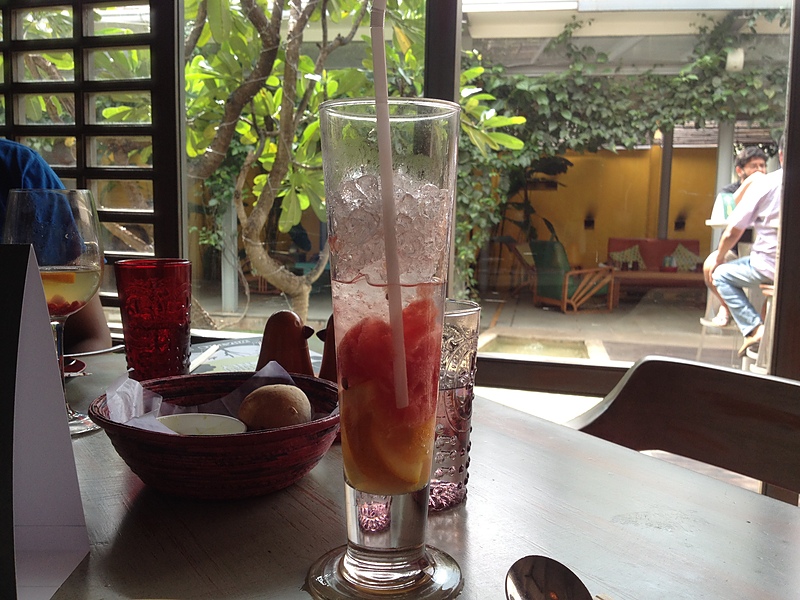 In a blind tasting, I wouldn’t guess that LikethatOnly's Chicken Rendang was something other than an Indian curry – after multiple tastings, it still seemed like a blend between the flavor profiles of Lemon chicken and Pepper chicken, albeit a nicely balanced version of it thickened judiciously with a bit of cornstarch, with tender chicken chunks further salvaging the dish. It was a pleasure eating it with soft lacy folds of Jala Roti, which is totally unlike any Indian Roti, and more in keeping with a docile latticed pancake. But the restaurant shot itself in the foot when it revealed that it imports the Rendang paste for this curry. Steamed Snapper Curry was a double disappointment – the premium fish was tasteless, and the red chilli and turmeric elbowed out the South-East Asian touches of lemongrass, coconut and ginger.  Thus the complex but definite pleasure of tasting a Malaysian or Indonesian master-curry,eluded us in both the mains. 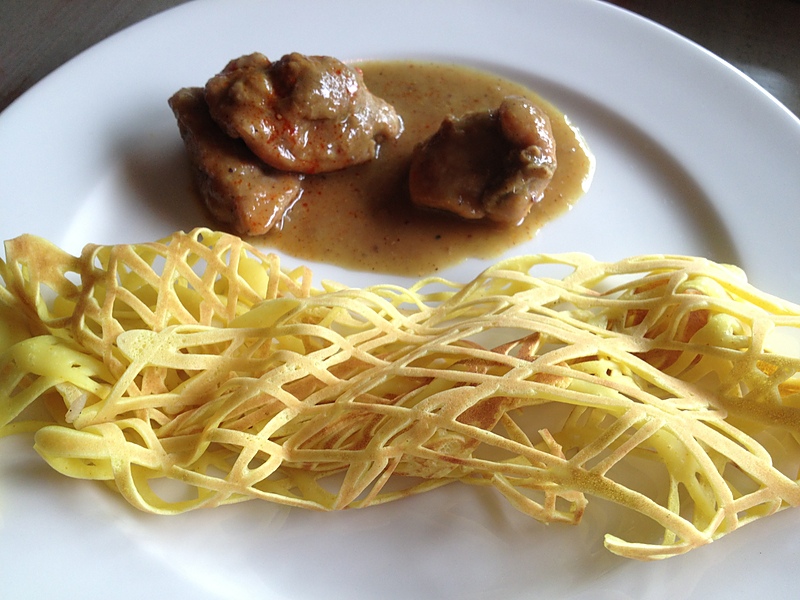 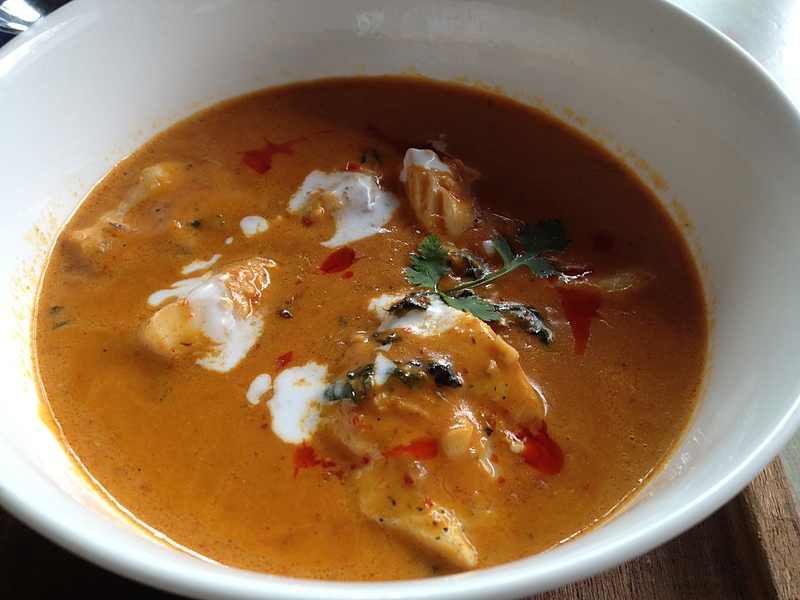 Ambience – The restaurant’s website cannot be blamed for lacking character, but it certainly over-inflates expectations. Leaping more than it should to provide adjectives to help reviewers, the website declares “Likethatonly is whimsical, quirky and irreverent- yet it is a celebration of fabulous food amidst a magical, wonderland setting”. You’d think they have imported Heston Blumenthal and his Willy Wonka factory for an extended innings in India. The reality indicates no such luck ,unless Vijay Mallya switches to restaurants and launches another one of his “go for broke” ventures. Having said that, the place certifiably registers itself as a chill-spot for the yuppie hipster mafia that has steadily infiltrated this once-upon-time pensioner’s paradise.  The entrance carries their rather chimerical logo – a red scooter with its hind-quarters replaced by an oriental fan set over a gold bottle cap that poses as the wheel – a half-moon face perches atop that fan ostensibly to get squelched by whoever treats it as a seat. An actual red and gold scooter, with kettles hung behind it , is parked near the entrance and it conveniently lacks the hybrid fantasia of its logo counterpart: after all who’d go to the bother of all that extra work? (that limit to the detailing is mirrored in the dishes too) Inside in the unmanned reception area, a dirty bathtub has water showered into it by a can that has lost its bottom – I suppose even an extremist like me has to concede that putting a corpse in that woebegone bathtub would be taking this “whimsy” too far.

Inside chairs of various styles (some with wooden chariot-wheels on their sides, patio ones of wiry metal in the courtyard, and even water-side stools which have gauzy shapes extending down from the seat, like the wings of a fly) have colourful cushions. The ceiling, in two of the seating sections, has a purposely rough-shod look of unadorned cement. The restaurant has a U-shaped seating area with the bar built into the inner part of its curve, and the al fresco area spreads out from the centre.  The wooden deck near the bar offers seats near a water body – that would have been a commendable idea, had the pool been something more exotic and inviting than a concrete catchment area for rainwater, that it resembles (it eventually became one when the downpour started later). Suspended illumination has vine-like structures sprouting out of the lamps- these sometimes sport synthetic butterflies and grasshoppers at their ends. Overall, the restaurant’s self-advertized  “magical wonderland” can only become one if you gaze at it after ingesting psilocybin, but quirky and imaginative it certainly is. 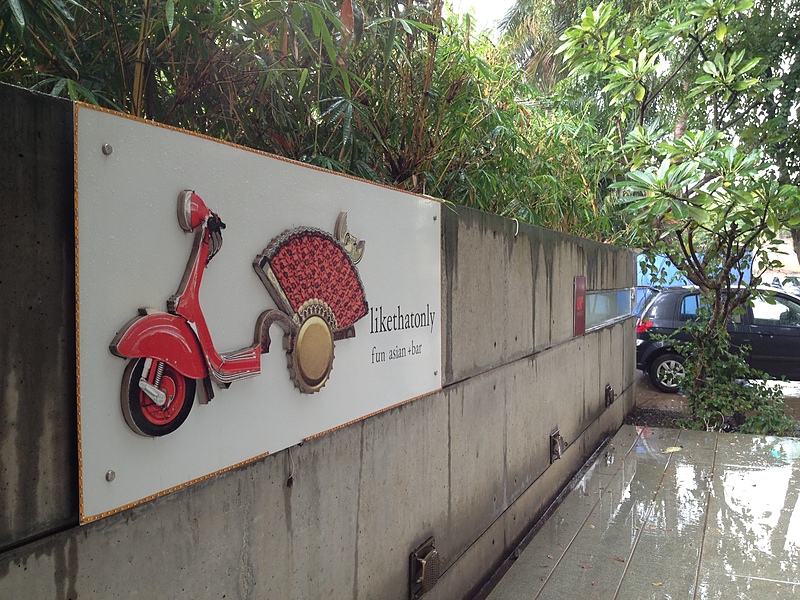 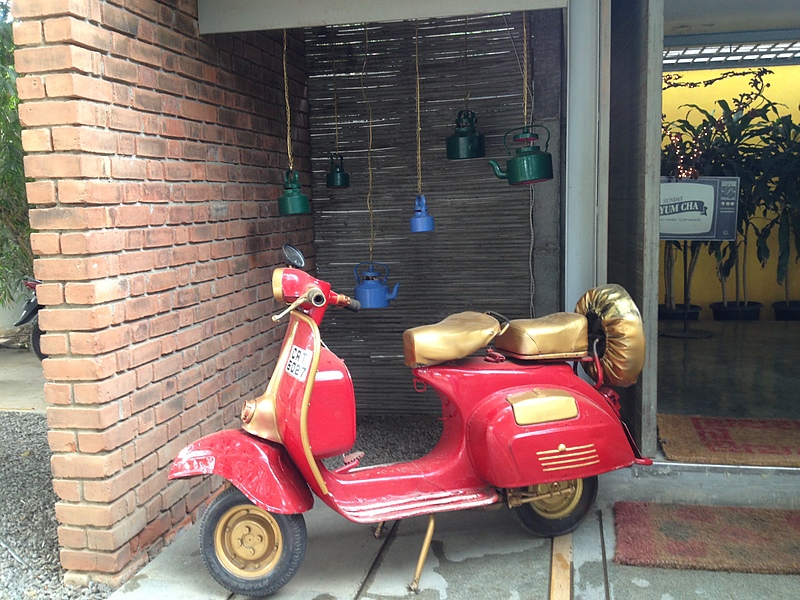 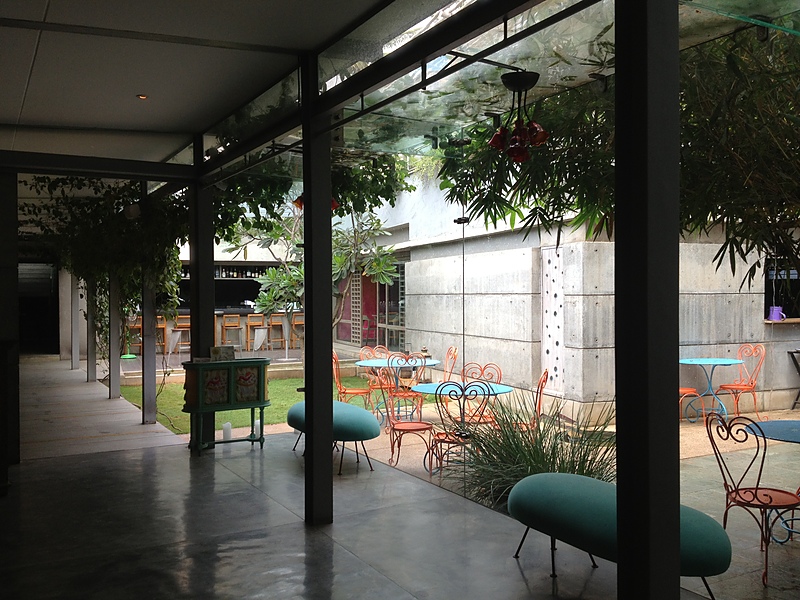 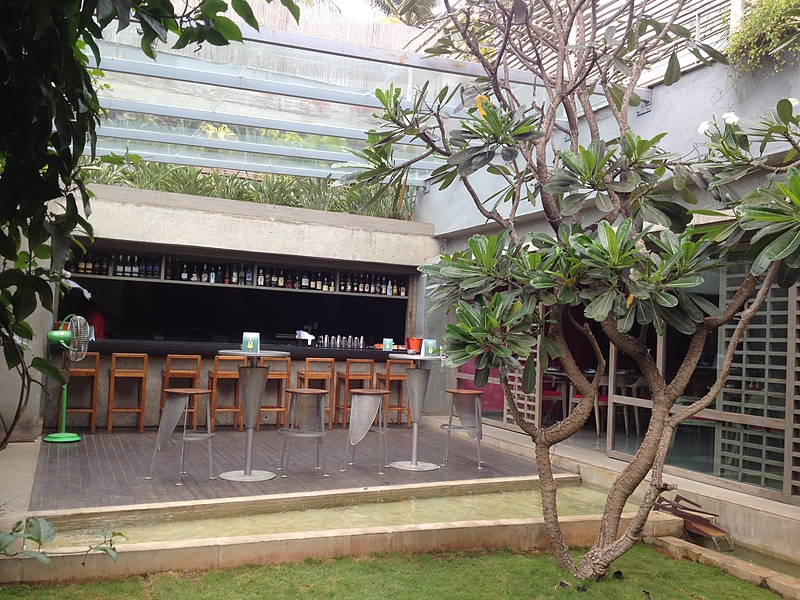 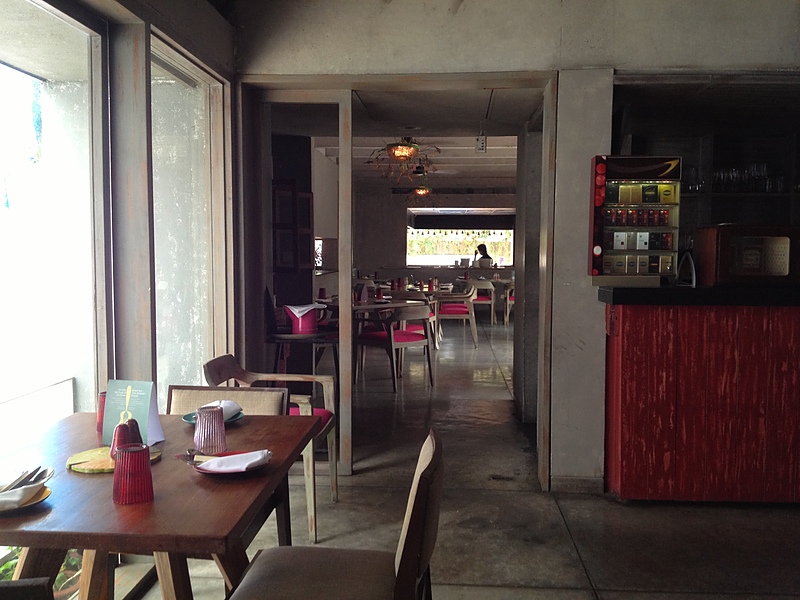 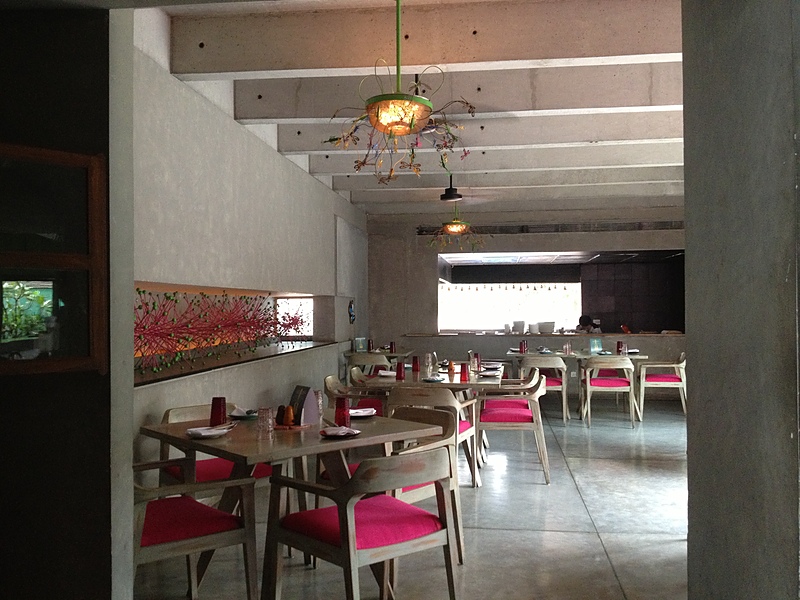 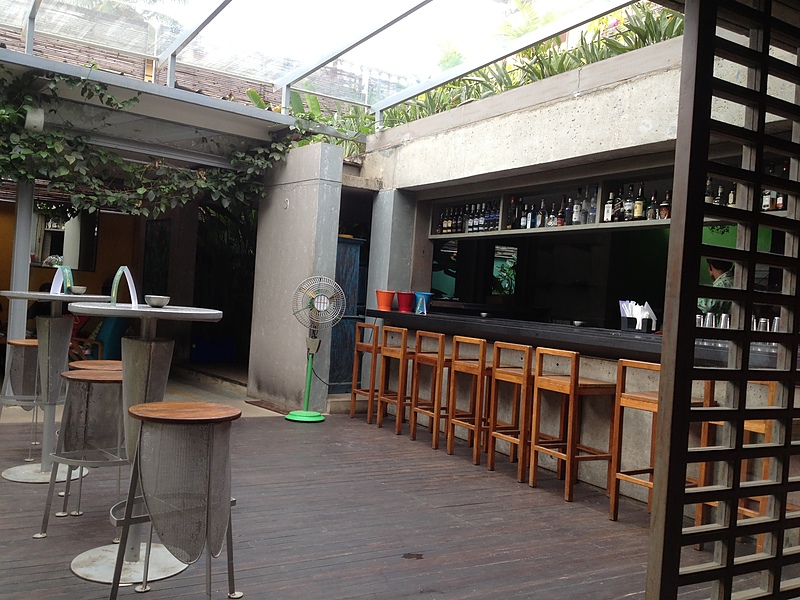 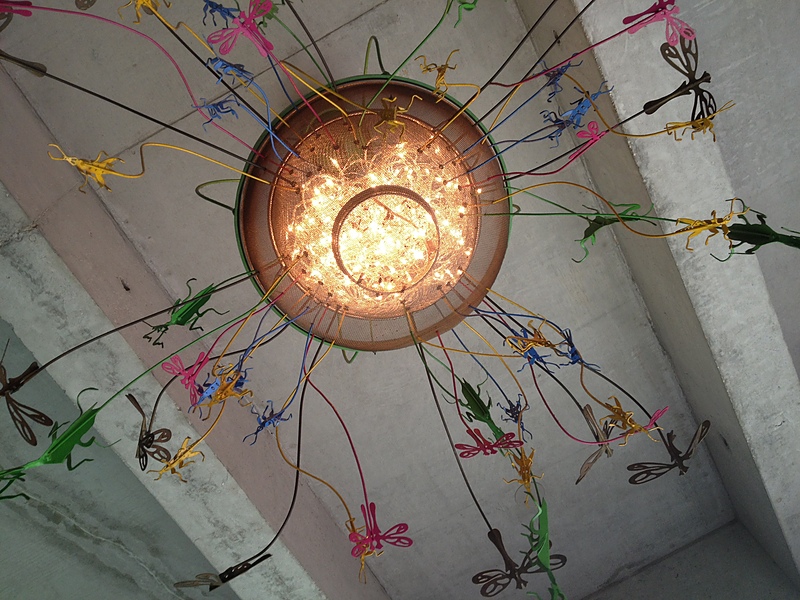 Kaffir Lime crème brulee ,and the Avocado white chocolate parfait –two of our default dessert selections going by the profuse praise they have received - were unavailable, to our significant disappointment, but alternate selections redeemed the sweets. In Tarte au Citron, the “baked citrus spiked crust” (as per the menu’s wording) had a lime curd that called the shots –this bracing core had a superb tart-sweet balance that lifted the entire multi-partite dessert. Intense pleasure then escalated with the glamour and sex appeal of “Tart of Bitter orange and Chocolate” –the single best dish of the entire afternoon. The orange’s powerfully distilled essence blended wonderfully with the dark torte ,smooth white ganache, and bitter choco mud.  Chef Chandra pulls off similar tart-cool triumphs in Olive Beach too. However disappointment returned with the Chocolate Fondant which had a core of salted caramel – the latter component was a sparse thick concoction which clung to the insides of the “fondant” and did not ooze at all on slicing the crust – it was joyless eating this stodgy cake (if you want real ooze of the surgical emergency kind, try Fava’s molten chocolate mudcake). More’s the pity when one realizes that we had requested the former dessert to be presented last – the formerly compliant and keen staff simply didn’t seem to co-operate with our fortuitous planning at this last stage of our meal. Moreover, the service overall lacked polish and was inconsistent in vigilance. 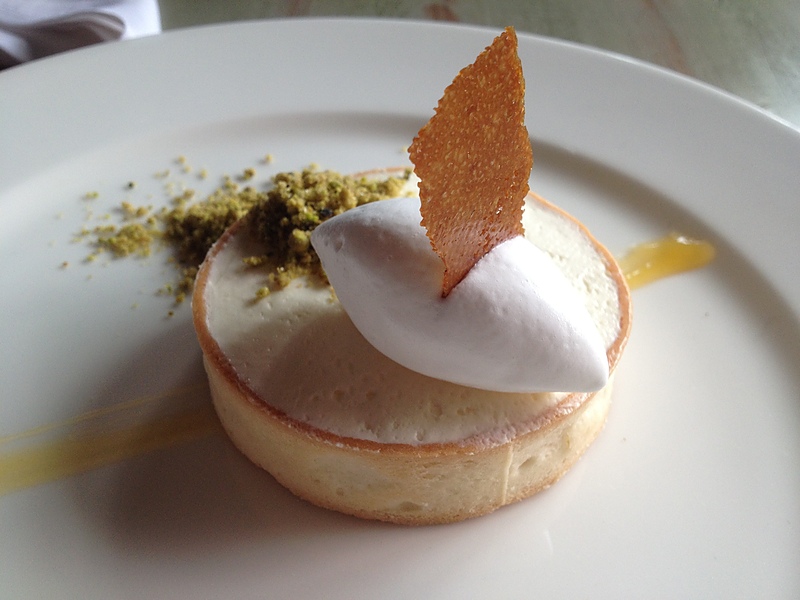 So the highlights lay in the kitchen’s fine handling of the pork appetizers, nuanced cooking of the prawns and the verve of the citrus desserts. While the ambience is good, it alone by no means is a reason to come here. The culinary ambition here is limited, and the restaurant’s concise lunch menu engineers no great joy. Bangalore today is brimming with restaurants of casual-chic decor but the “bistronomy” movement, where terrific cuisine percolates into informal environs, is a very rare, possibly non-existent phenomenon in this town. I’d thought (rather insanely, I concede) that I might find one such scorcher in this neck of Whitefield, and that this joint might offer the surge of pleasure missing in Olive Beach, but I guess Chef Manu Chandra is Likethatonly.