French Cafe stands tall among the fine-dining pezzonovantes in town, showing those who have forgotten, how it is done - it eschews post-modern faff (no pansy frills on plates here) and engineers delicious sophisticated food that is eminently "French" by instinct, while showing a classically Kiwi sense of self-effacement and humour in its title -if this is a "Cafe", then I'm richer than Warren Buffet.

I made the mistake of composing the above introductory paragraph prior to my second visit to French Cafe. Lulled into a sense of heightened expectations by an August 2012's 9 course menu that had featured superb seared duck and an exquisite ballantine of quail, I'd presumed no less for my 2014 meals in French Cafe. Sadly, the reality ,extended over two meals and eight different a la carte dishes exclusively consumed by yours truly, revealed that this kitchen and dining space still has ample space to evolve

If you love splendidly elegant ambiences, don't expect to find it here - yes, there's certainly a first-class air to the environs, supplanted by a recently acquired al fresco space which sports a less stuffy,more convivial spirit. The newly added, often sunny courtyard showcases a table for six that is provincially minimalistic. Next to it is an indoor dining hall, again more Spartan than profligate, where the chefs can specially cook and serve a meal for your party. The key here seems to be a Kiwi-Nordic self-effacing touch that steers its appetite away from the aristrocratic magnificence of classic France. 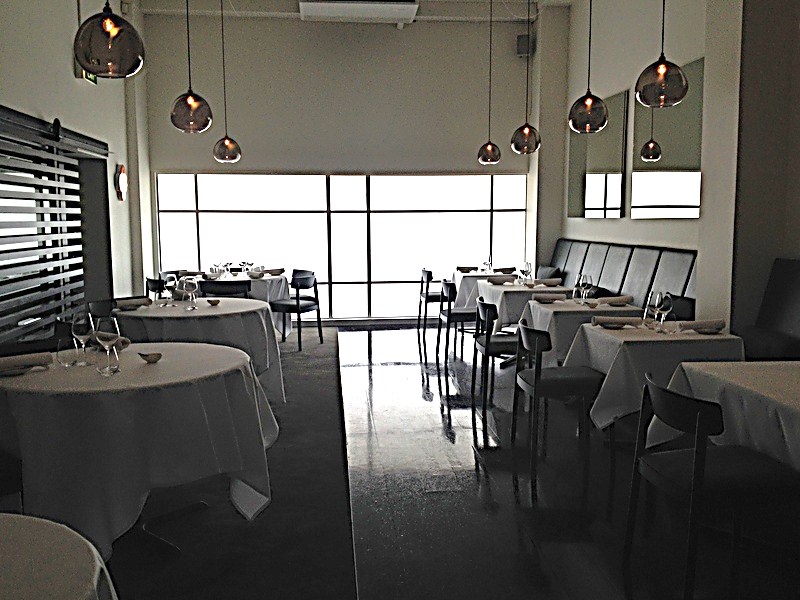 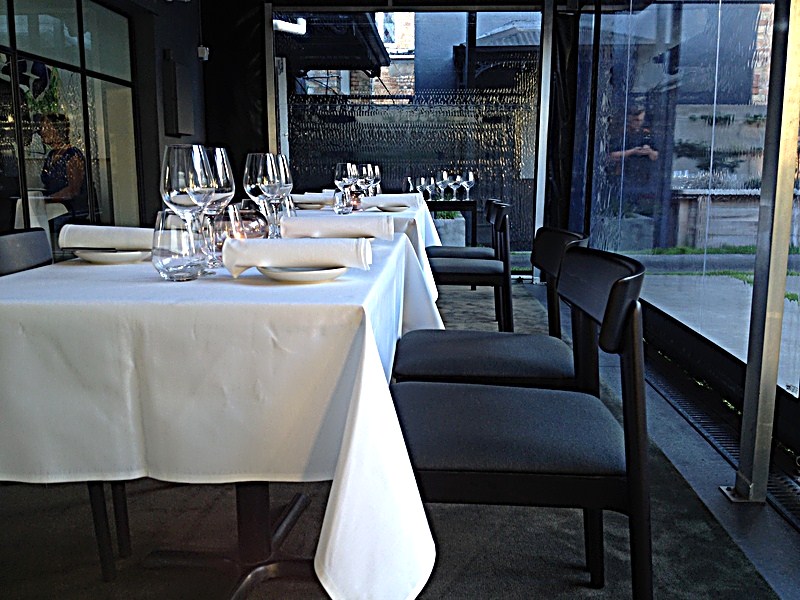 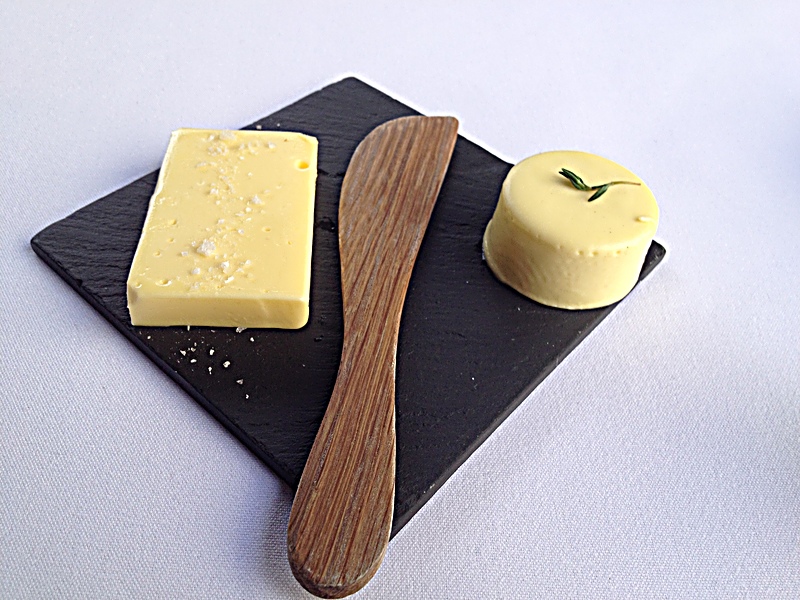 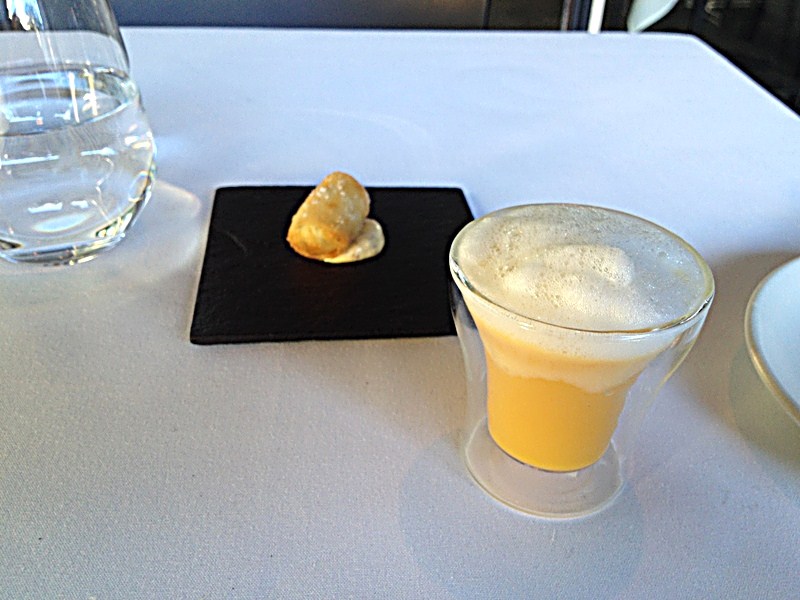 Eschewing the shortened tasting menu which was much too similar to the one sampled 18 months ago, the a la carte with a fairly engaging selection of offerings was opted for by UPN. Almost instantaneously, the entree section's "Egg Yolk Confit" with its haute European associates was selected. While the taste is nothing spectacular, the impressive presentation juxtaposes three repositories of umami in one dish. Eggyolk held its shape - nature's own spherification with only a little help from man - until it was sliced to flow, next to smoked mashed potato and an infusion of mushrooms with thyme poured at the tableside in a stylish touch. Excited interest also arose by the prospect of "Lobster baked in parchment" - the "en papillote" technique went eminently well with the rustic-chic courtyard right in front of me. However when the wooden clips came off, and the parchment (crumpled white paper) was unfolded, the presentation was terrible - like something thrown out of the kitchen into the garbage bin rather than a dish served first-class. Some trickery here ought to be called for -like the kitchen opening the package ,prettifying the storm-blown-mess-in-a-puddle and then neatly wrapping it back as though it was never opened. The selection of summer vegetables were fine but the succulent lobster sorely lacked sweet essence. 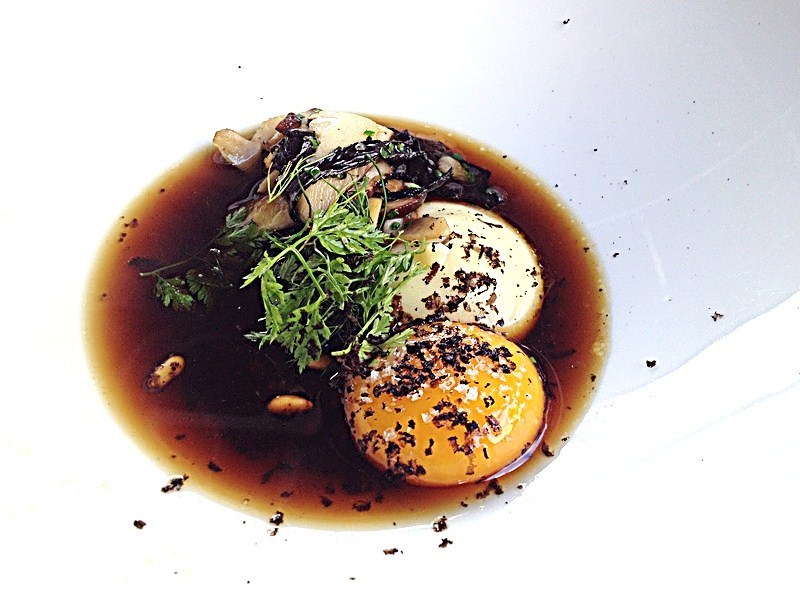 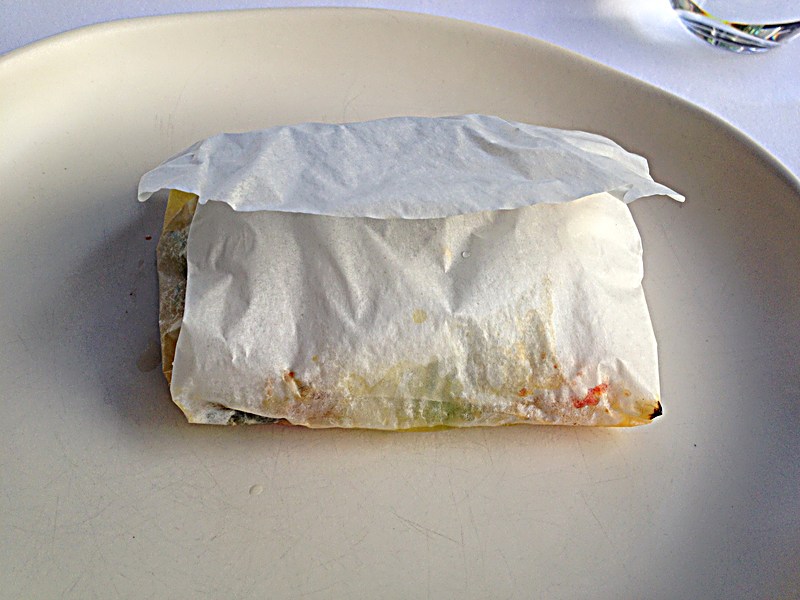 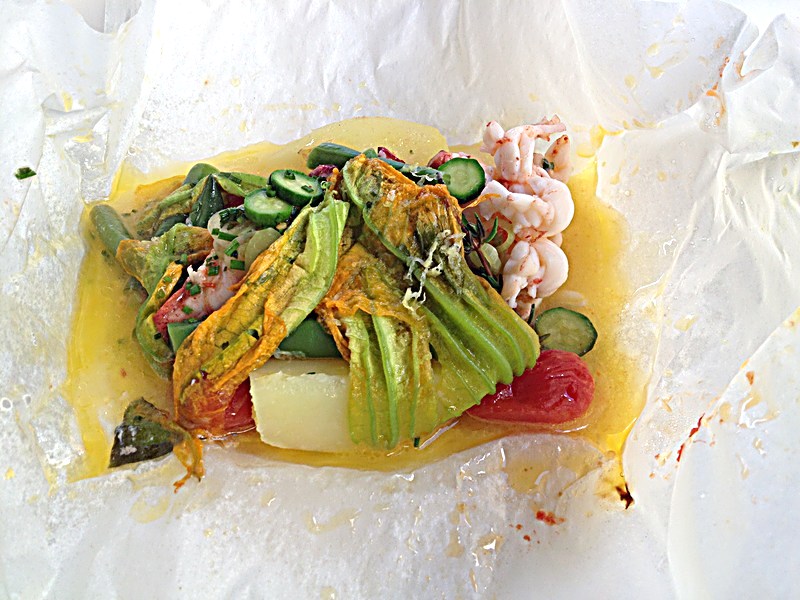 French Cafe with perilous audacity has placed two wooden bee hives, busy with activity, at one side of its courtyard - the bees kindly left me alone but I was bothered by a housefly during the consumption of my main course. If the restaurant wants to remain proudly French, it better make a good sauce to go with the heft of the mains - the snapper was par-for-the-course and crayfish tender but there were two dispiriting similarities to the previous course - the hunks of shellfish missed sweetness and were instead flecked with an olive oil-based broth that is just the shadow of a fine sauce. Ultra-smooth mashed potatoes aren't enough to atone. I thought Turf would make up for Surf - stylishly presented cylinders of medium rare Lamb were smoothly meaty and revealed the minor miracle of zero gaminess. But I struggled to detect flavour in it, and the brown sauce did nothing to distract me from this quest. 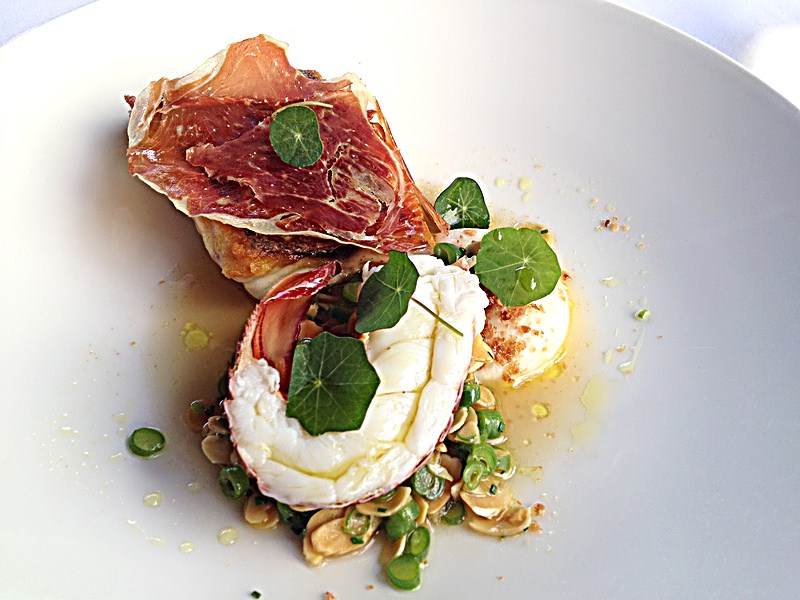 Service (7.5/10) is efficient and polite with black-jacketed elegant servers who will endeavour to attend to you whenever time allows. Charming French-accented hosts like Simon (same name as the chief Chef) will enhance the evening for you with their concern and knowledge. But for faultless vigilance, Co-owner and the chef's partner Creghan Malloy Wright will have to recruit more waitstaff which will inevitably mean driving the prices by up. Australia's elite restaurants charge at least 25% more and Europe's fabled epicentres often charge more than double of French Cafe's rates.

Also for a restaurant which is often called the best in Auckland, the inter-table spacing in the al fresco space isn't generous - I'd separate them out further by running the dire financial risk of losing at least one table.Also those tables ought be rotated by 45 degrees so that diners can see not only the courtyard but also the restaurant interior

Chef Simon Wright has cultivated and ensured admirable meat-cooking techniques - he prefers to serve meat without bones but still succeeds in moisturizing it. And he sculpts the carnal protein into pleasing contours that are artfully arranged on the plate. While the seafood is similarly pretty, it struggled to find depth on two separate visits. In a poached shellfish appetizer, the chef's plan was to make the lobster-'n'-mussels joust with a sweet corn mousse and green herbs ,with all this tied together by the smoked kahwai broth. But the shellfish lacked flavourful spine and broth missed brio.

French Cafe's lone vegetarian main course that autumn might not have instantly seduced an Indian Brahmin, but if that person's palate truly has inclusivity, he or she would experience what I did. I'd presumed that celeriac was merely used to flavour the sauced rice, but as I ate through that chopped conglomerate and then searched for the actual rice, I realized with surprised admiration that the celeriac itself had been brunoised to comprise the the risotto, with green lentils and potato added. Savoury and mildly sweet notes thus formed pleasant eddies that built into strong waves when consumed with brussel sprout leaves - these gave wonderful heft to this amorphous dish. If you craved some creaminess, the chef had taken of that too by planting a quenelle of truffle mascarpone by the side. This was the game changer for the evening - a technical triumph whose harmonious flavours steadily revealed themselves. It recalled the same kitchen's 2012 langoustine risotto perked up with mustard ice cream. 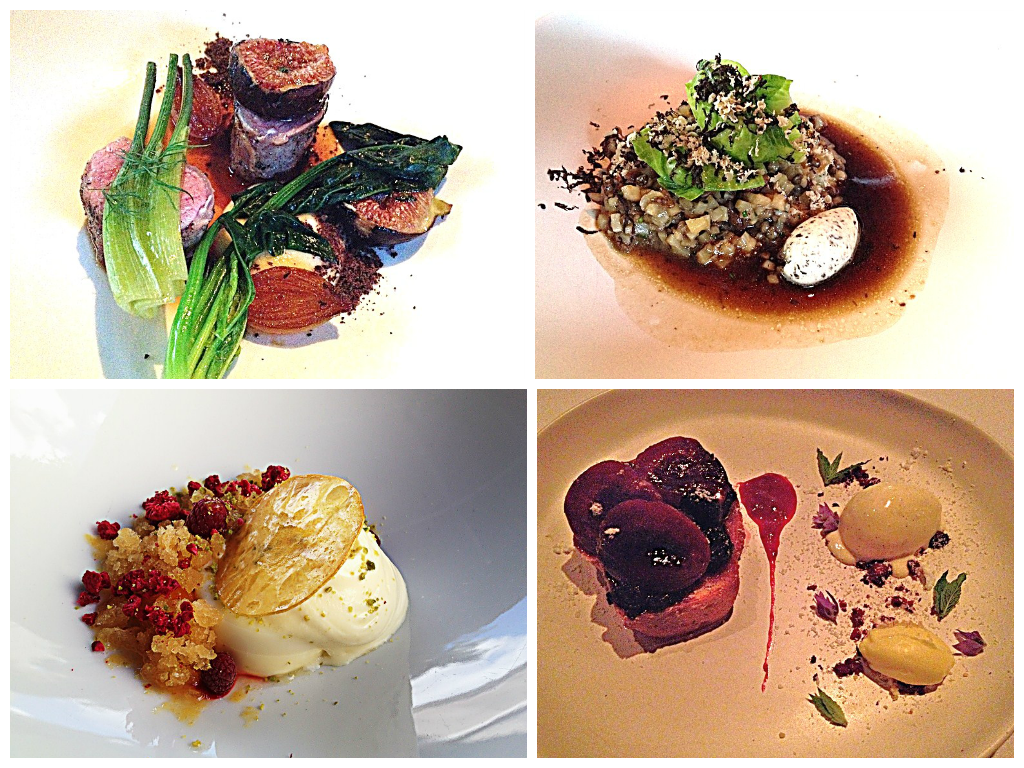 Bottom Row: Sweets as reviewed below.

Desserts have never disappointed here. Lusciously ripe vanilla panacotta was perfectly contrasted with an almond crisp - I also enjoyed the al dente cuts of peach in this composition but the lingering sharpness of raspberries isn't the best match for this dessert. Another selection featured the unctuous toasted softness of a brioche darkly crowned with the lovely flesh of plums drenched in an intense reduction. Cherries, collapsing under the weight of their own cooked concentrated flavour, lent further richness that was pleasantly doused by lavender icecream.

Tariffs in NZ$ - $30 for appetizers, $46 for main course, and $20 for desserts. No further tax. So French Cafe is expensive even by international standards but I never felt it was a rip-off.

In Auckland, from 2011 to the current year 2014, the restaurants French Cafe, Sidart, Meredith's routinely square off for the title of the best in the land. I have dined thrice in the first two places, and twice in the last one. Sidart, I can report, is unlikely to prosper further if they continue to derive inspiration from New Nordic Cuisine - patrons may flock there but the place continues to rely on style more than on substance. Elegance defines most of Meredith's offerings but the kitchen is too polite for its own good, and save for a spectacular duo of chicken or a stunning presentation of swordfish, the kitchen coos rather than sings. And then we circle back to French Cafe - it has the most breathing space and certainly the most imaginative dish architecture. And in pure taste -which of course is what great dining eventually boils down to, it beats out Sidart and edges past Meredith's. That's doesn't amount to saying too much for its caliber - in my above-detailed meals in F.C as you might have noted, I didn't taste a single sauce worth ensconcing in savoury memory, nor any meat that made me stop and sigh. Ambition and flavour here were two steps shy of world-class brilliance.