I was chatting with my cousin brother (a professor emeritus told us in school that one could either say “cousin” or “brother” but could not conjoin the two in a single expression as it is against the rules of English, but my contention is that when one has grown up with a cousin and feels close enough to consider that person as a brother, the appellation of “cousin brother” is perfectly justified) during the course of a meal and asked him what is the single best dish he had tasted in the past five years. He mentioned the amazing taste of a “pink” fish in mustard gravy that he’d experienced in a communal Bengali meal enjoyed with his colleagues, while adding that a little birdie had spoken highly of Bhojohori Manna. This restaurant’s website informs us that it is named after a famous Bengali song rendered by Manna Dey in the 1970s. Aspiring to get manna from our bhojan the next day,  we rapidly made a “sketch” to hit this joint.

But the mystery of pink fish he’d tasted was not solved. Had the cutting-edge chef served him hilsa sashimi ?(I can imagine a stateful of Bengalis gagging) Salmon or Tuna seemed more likely.

So on a nice afternoon, we set out into the degenerated sprawl of Bengaluru, trawled into a muddled lane of Koramangala and then settled into our window-side table in the restaurant. Quickly scanning the tangible menu to make sure that it was correspondent with the online one, we recited our orders.

Mohun Bagani Chingri Kabab – Suggested to and accepted by us in lieu of the originally requested Prawn Cutlet that was unavailable that day, this dish did not have the caliber to blow the inaugural conch or whistle. Spicing and over-roasting  dominated the taste of the prawn,which was further stifled by the unnecessary capsicum and tomato on the same toothpick skewers. If I start a restaurant (the day of my ruin) and if a chef in the entrance exam had cooked this dish, I’d have wished that chef the best and politely told him that he didn’t make the cut.

However if the same chef had cooked the rest of our meal, I’d have called back that chef.

Jinghe Aloo Poshto (potato flavoured with poppy seeds) –Wah! A soft mellifluous ghazal played on my palate (I haven’t listened to much of Rabindro Sangeet) The poppy seeds had a lovely roasted hum that was pleasantly complemented and enhanced by accents of mustard and coconut. It was actually a better accompaniment to the Luchis (deep-fried poori-like fluffy discs, made of maida) as compared to the Aloor Dum- a robustly spiced potato and pea curry.

Betki Rongpuri was presented as a delicious fried fillet. The technique and flavouring were spot-on –one could easily and absent-mindedly polish off this entire piece, and a glass of nice white wine or even a chilled beer would have been an ideal accompaniment (the place does not have these inspired accoutrements but they have an enticing range of mocktails) An English-style thick chunk of fried fish has a better chance of bringing out the fish's inherent marine flavor while its golden-brown batter is usually has little taste, here the inverse was true –mustard was smartly blended with the rest of the Indian-style coating fried to a crisp, but the thin cut of white flesh only spoke in sandwiched whispers.

Mochar Chop (fried banana flower) which I earnestly wanted to sample is only available between 5pm to 8pm – I realized belatedly that my visit was ill-timed.

Ambience – Unremarkable. The set-up is a spartan functional one ,where the sporadic  aesthetic touches are undermined by lack of ambient lighting. Black and white photographs –too sharp to belong to a Satyajit Ray film – depicting various facets of provincial life adorn the white-washed walls.  Inverted wicker baskets that hold fluoroscent tube lamps provide whimsy  to the ceiling.

Unfortunately neither of the prawn dishes we ordered were a success. The main course of the much-vaunted prawn malai curry had a giant prawn planted on bed of red, glistening with oil. While extricating the meat from that scarlet armour was not really akin to battling a sea monster, it was far from easy – what we eventually managed to prise out of that lobster look-alike were a few chewy bites.The cream and coconut curry, which usually absorbs enough sweetness from the prawn, was too oily and the sugar added to it was unnecessary. The whole dish would have been far superior had soft plump prawns been cooked in a curry of better consistency and balance.

Kosho Mangsho- Another Bengali favourite, this was the finest savoury dish of that afternoon –the mutton was wonderfully tender, with none of those gamey undertones – I haven’t eaten a better version of marinated mutton anywhere else. The gravy per se was not similarly magnificent –the recipe for this calls for half all the spices in the Indian cauldron but they managed to desist from overwhelming the taste of the mutton.

Ilish Shorshe – This passionately loved classic drew a mixed response from us. We had no issues with the yellow coconut-blended mildly piquant gravy of mustard,  both CB and I agreed that it complemented the fish, but did not particularly enhance it. The soft white flesh of the Hilsa, meager and difficult to get to amidst the fine bones,was certainly impressive – a delicately enjoyable flavor, like a super-premium probably non-existent variety of Bangda.  I could blissfully eat a large boneless fillet of this fish in a Bengal where communism has been completely exorcised.

Service: Mediocre. The restaurant is understaffed ,the dish delivery time is prolonged,and you cannot count on the service to be either vigilant or briskly efficient.  But the staff sensed that though we are were new to the cuisine, we were keen to explore it, so when the waiter came to clear the consumed mains, he saw that we had left some odd-looking part of the Hilsa in the gravy,and upon learning that we thought it was liver, he clarified that it was fish “eggs” and hinted whether I’d like to taste it – I did, taking taking small cuts of these grey densely firm clumps. It was softly granular, with faint echoes of the beach.

Gur Rosogulla – It outclassed the regular unidimensional sweetness of White Rosogulla – the jaggery rendition made its success have paradoxical elements – it was richer yet more restrained.

Natun Gurer /Nolen Gurer  Ice Cream –  Superb!  Jaggery once again worked its magic in both the ice-cream and the coulis- the latter was a rich cool sauce that gave glamourous enhancement to the underlying elegantly flavoured blend of khoya and coconut.

Our meal might not have been as pleasurable if we had not done research prior to setting foot in the restaurant – of our 8 selections which were all brought to the table, only one missed the mark whereas the one and only recommendation by the waiter, fell flat. Also, we did not mind the taste of mustard which was used in many of the dishes, but many others in India find this to be a precluding factor in their culinary enjoyment. Since we ordered multiple items, the bill was not exactly innocuous but I had no regret as we had got the privilege of tasting a variety of delicious dishes. Moreover, I understood at least one reason why Bengal produces an array of impressive artists and intellectuals – they receive such fine nourishment. 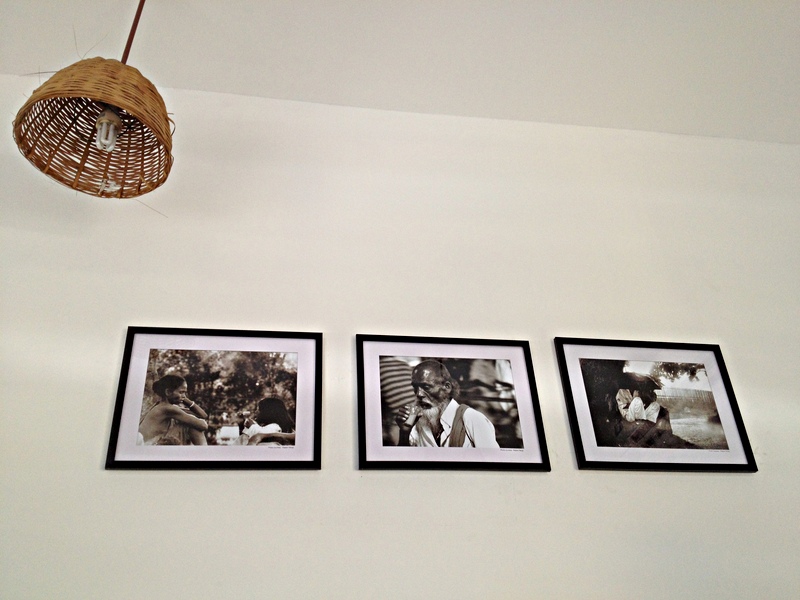 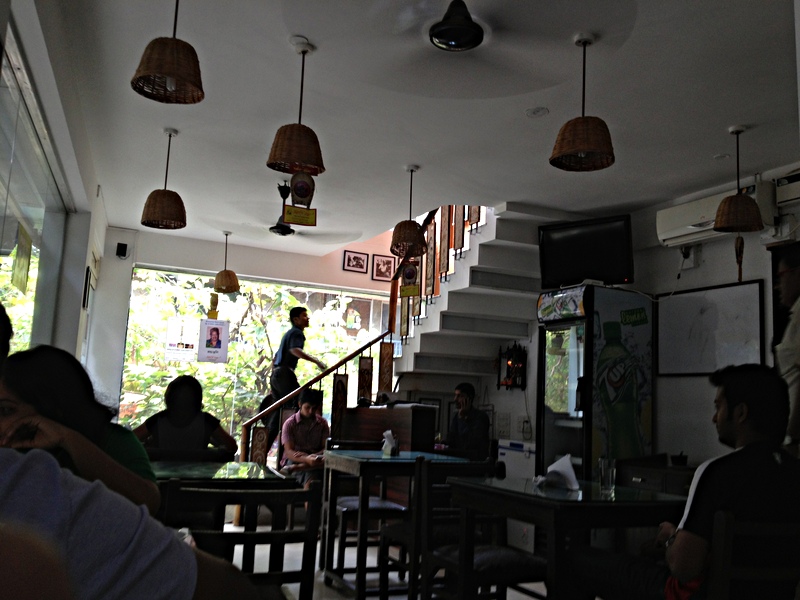 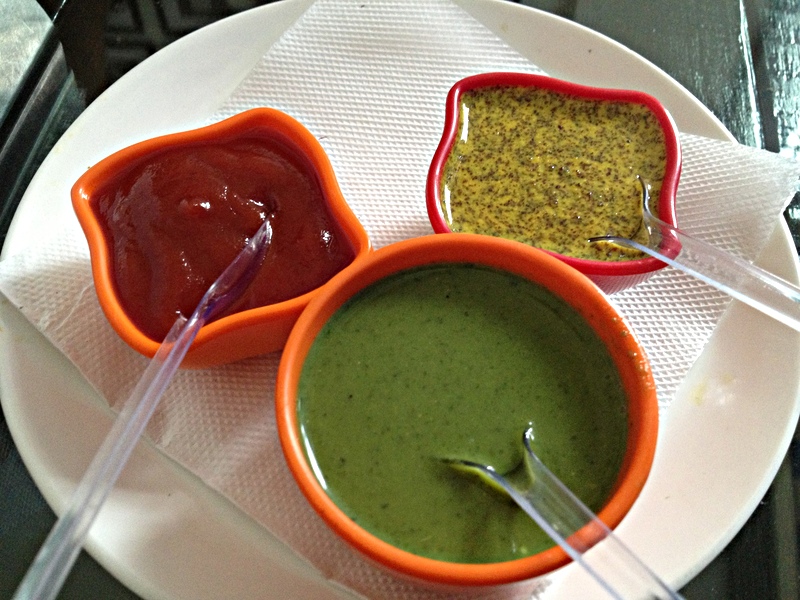 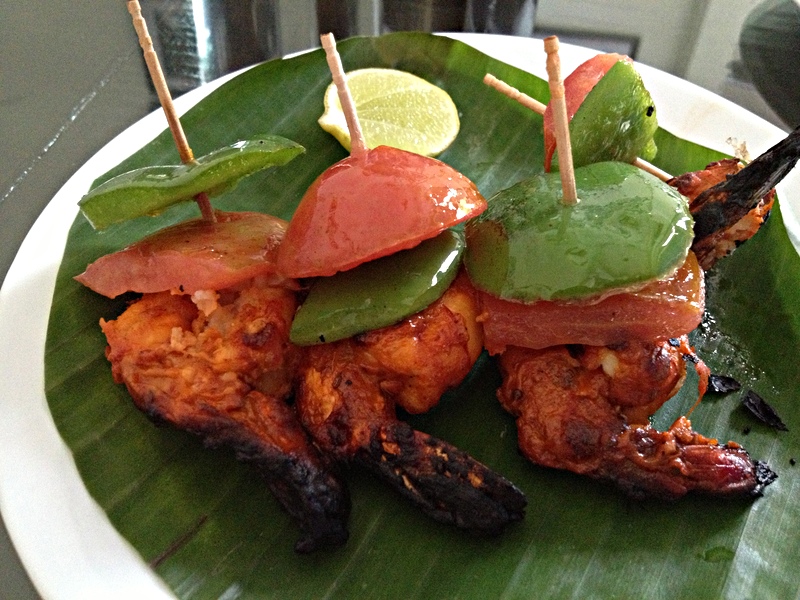 Something to lighten your meal 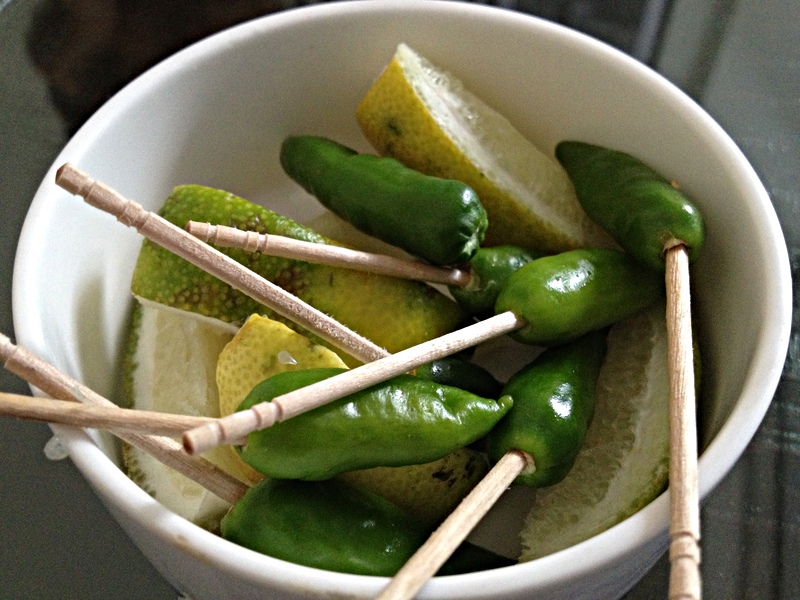 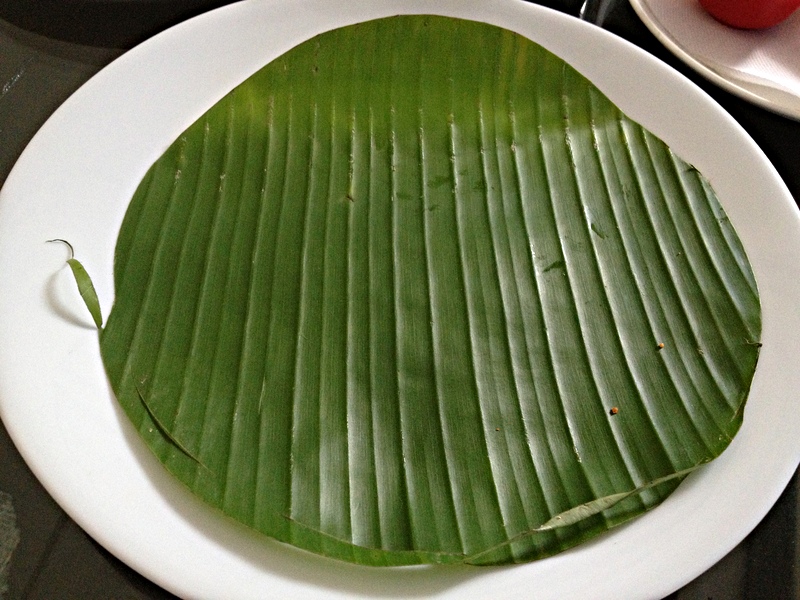 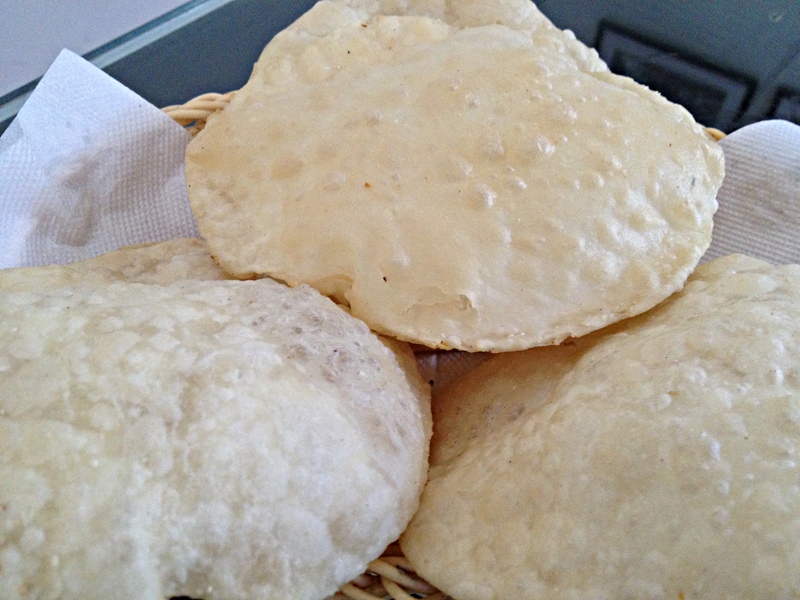 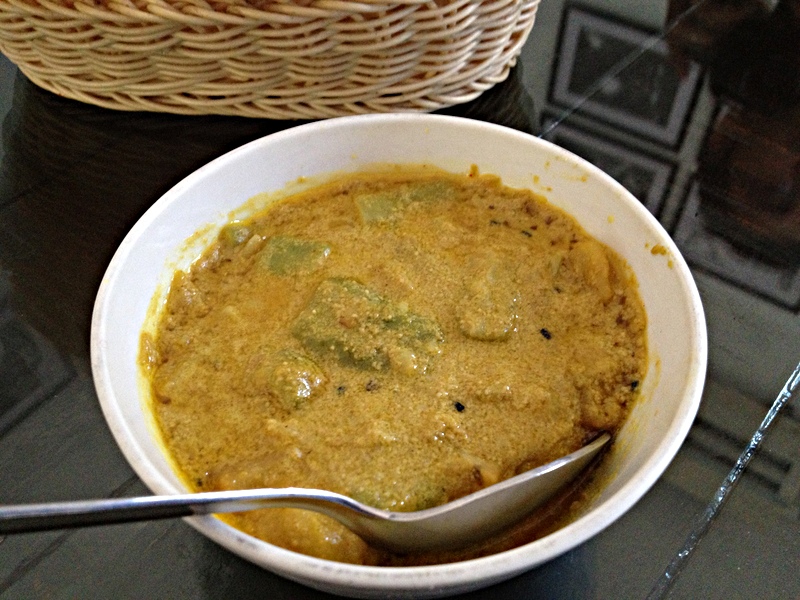 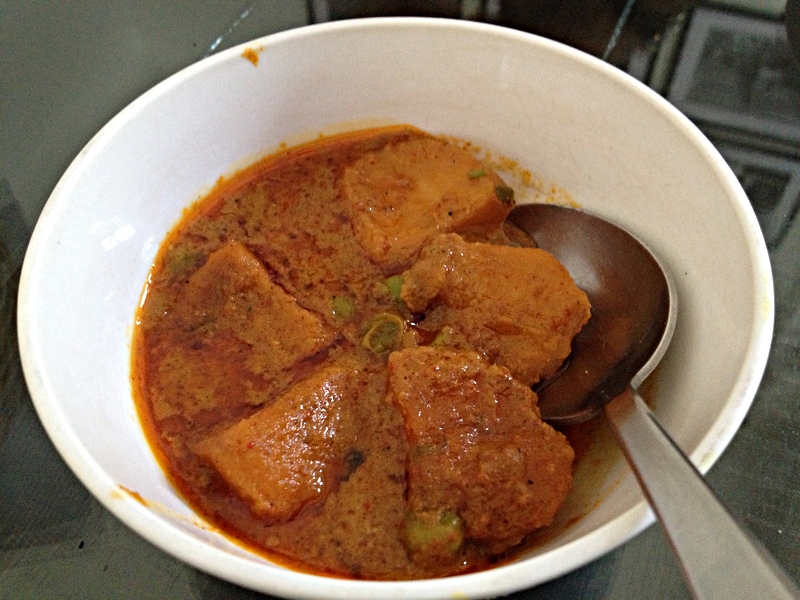 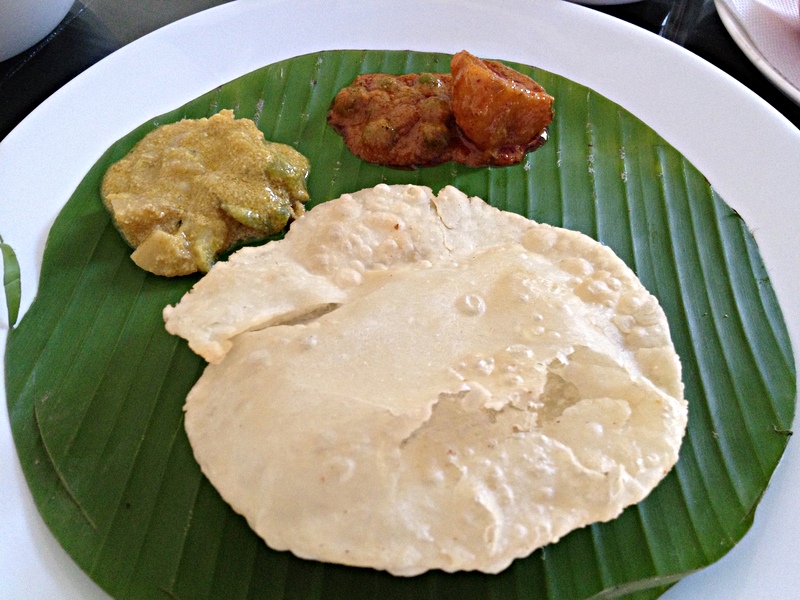 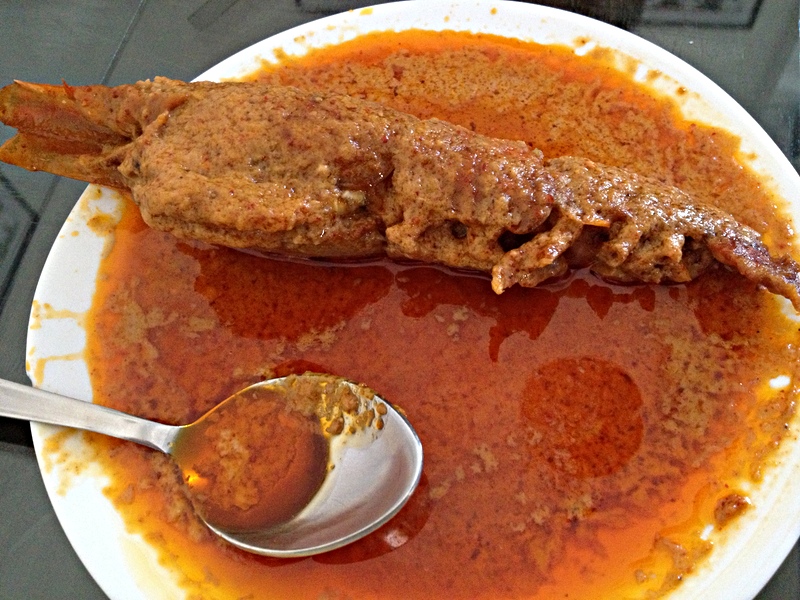 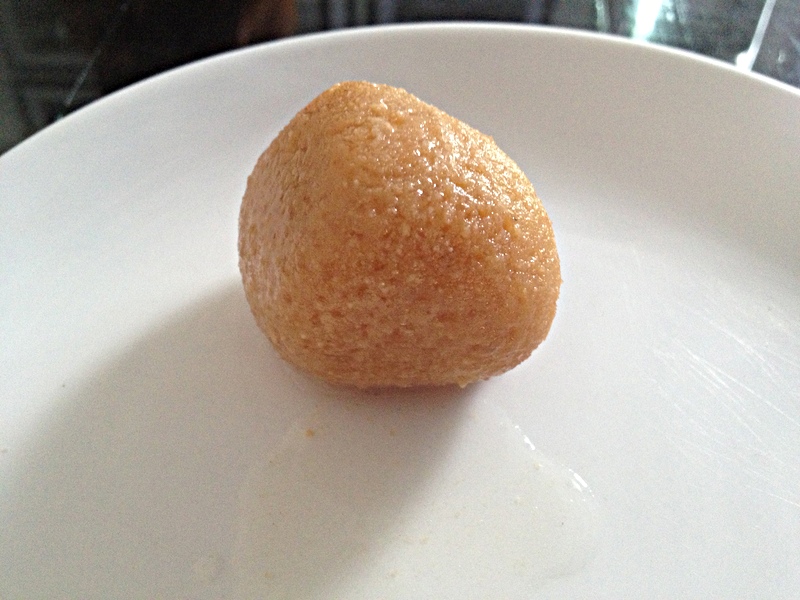 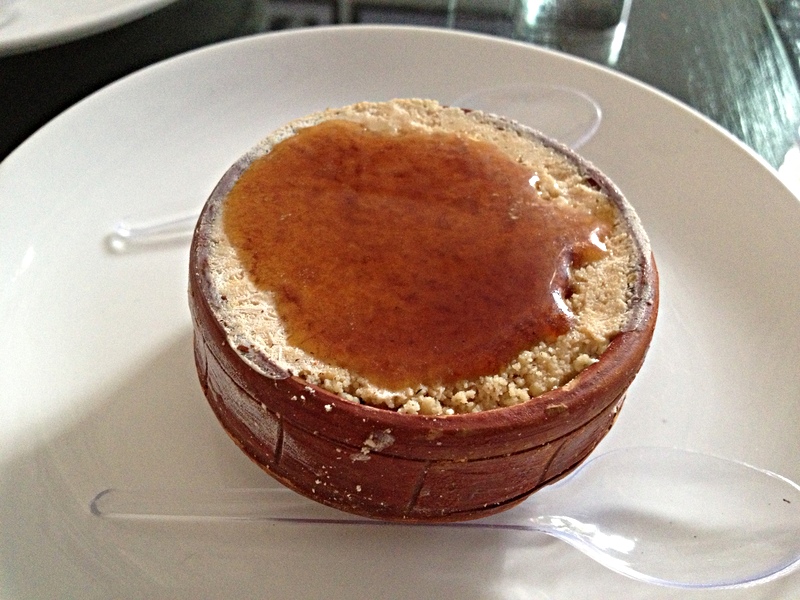