Szechwan Court at The Oberoi

In a large (now overstretched and lacerated) city like Bangalore that has dozens of chutnified Chinese restaurants featuring a variety of dishes that straddle the border, I can report one has a solid chance of encountering genuinely superior dishes that demand encores. But consistency of quality across the menu is a weak-point, and not infrequently there are dishes that are overly stodgy or excessively piquant, thus marring the overall balance. There is always the temptation to luxuriate in a dedicated Chinese temple of cuisine, where ingredients are top-notch and expectations run high. Szechwan Court, backed by fertile resources of the 5 star Oberoi group of hotels, has been consistently ranked as the No.1 Chinese restaurant in the city, and I seized upon a long-awaited chance to dine in this elite establishment when an attractive offer came along. The Restaurant Week Bangalore menu (available twice a year for a period of one week each),sponsored by Citibank, gives each diner 1 appetizer, 2 mains and one dessert from a limited-selection set-menu for this restaurant. Our group elected to sample this menu, along with some selections from the regular-price a la carte list.

Ambience - 7/10 Enroute to the restaurant,one passes a small waterfall that cascades over black rock, and the pool below is rimmed by plants while orange-gold fish glide in the waters - a cockatoo and the Giant Panda were missing. Inside the restaurant which is elegantly restrained, the outside scenery can be seen past glass walls on one side, through parted curtains of gray gauze. The ceiling suspends troikas of lanterns that are fitted telescopically into each other, giving a gentle incandescence.Chair cushions and tablecloths are of a beige pattern and while the floor has black tile in the restaurant's middle, the rest of the flooring is made by uncovered wooden tesseracts that have become scuffed and stained in certain places. Cutlery is silver, table-top decor is standard-issue and in front of each of us ,lacquered chopsticks were positioned. With high respect we kept these untouched till the last quarter, when we felt obliged to grab them and practice some moves, but we stopped short of astonishing the staff with feats of eating dessert with chopsticks.

Our meal - 7/10 .
Salt and Pepper prawns were subtly flavoured, and eschewed batter-coating, with the flavour of plump prawns being allowed to express itself. Though not spectacular, it ticked a lot of boxes.
Chinese Roast Pork - It seems ,if this dish is anything to go by , that we still haven't brokered any meaningful detente with our northern neighbours. A major disappointment overall ,the meat was sliced and served as small strips -bathing them in amply flavourful barbecue-style sauce was a minor saving grace, otherwise the pork per se was chewy and dry, and simply didn't match up to the tender chunks of juicy pork that I was dreaming about. Two of my companions who sampled it, concurred ruefully. Though my search is still nascent, I intend to continue finding a rival for an astonishingly perfect pork appetizer I was privileged enough to sample in China Bistro, Evansville, In. 4 years ago.


The above two were ordered from the a la carte, the set-menu follows:
Salt and Pepper Vegetables - The most zestily flavoured dish of the entire afternoon. Imagine a reticent China-man breaking into a rambunctious Bhangra. The specific redolence of its gustatory sparkle made ask the staff if ajinamoto was added, and i was told "No Sir, we do not add ajinamoto to any of our dishes, what we've added here is a five-spice blend." (I assured him that I wouldn't mind even if they added ajinomoto, even the medico in me dismisses all the hullabaloo about MSG)
Chicken dry chilli was barely spicy- these yielded easily to the bite and would make an fine companion to tippling. Sesame chicken was the best dish of the whole lot. It had been artfully wok-fried, with a nice whisper of garlic ; the fluffy coating was blended with toasted sesame that ensconced tender chicken - all of this came through in one beautifully satisfying bite. It evoked another Oriental gem - Prawns on Toast.


Mains - Chicken in black pepper sauce --The sauce had a complexity of aged depth, a touch of sweetness and well-rounded balance that made me ask the staff whether mirin sauce had been admixed. The chief steward could not comprehend the content of my query, and averred that pepper was the main ingredient of this offering which was reported to be their signature dish. Then, Szechwan Spiced Chicken combined the archetypal constellation of this dish's multiple ingredients - peppercorns dry chilli capsicum garlic ginger soy sauce wine et al in an admirably disciplined way, toning down any surfeit of heat and organizing the bold flavours with an expert touch. Quality of chicken in both these mains was up to the mark, and accompaniments in the form of vegetable noodles and steamed rice easily passed muster.


Tofu in black bean sauce -I'd never order this from the a la carte, but since it was one of the set-menu main courses and and we had already requested repeat orders of the two other listed mains, I opted for this in vague hopes of unexpected pleasure. No such luck: the black bean sauce was not off-key,but apart from soy sauce I detected no other notable influence and the tofu did not have any extraordinary tweaks done to its staid taste. It was rather pusillanimous on part of the restaurant to put this on their set-menu.
The fourth main offered a welcome vegetal contrast with crunchy fresh greens in a sauce that had the roasted garlic flavour excellently emerging.

Coconut Ice-cream - Though it had a refreshing smooth and pristine consistency that is superior to certain highly regarded commercial brands, it had an aged coconut flavour that is a lesser sibling to the tender coconut flavours offered elsewhere. Lychee ice-cream had the mouthfeel of 30% custard and 70% ice-cream and though the lychee could have been a bit more pronounced (adding actual lychee slices would have been even better), I liked it. Chocolate brownie parked atop a crisscross bed of cocoa sauce was satisfyingly rich and paired with a nice cool dollop of vanilla.

Service 6/10 - manages to be fine, though it faltered in the last leg. Despite being efficient,the front-of-house lacked charm, but I gladly concede that they had finesse in individually plating dishes, moreover our jasmine tea was regularly replenished. For the main courses, they asked if we were enjoying ourselves and we answered with a contented "yes" but when they requisitioned feedback for the pork, and I said that it was on the chewier side, no response was given. At least 20 minutes elapsed before our desserts (nothing complex) were brought, and yet we were not intimated beforehand of this delay - we had to remind them, though the steward did come around later to apologize and request further time before delivery. When we got up to leave at the end, a send-off by any of the staff, was conspicuous by its absence.

Tariffs - The Citibank Restaurant Week Bangalore menu, with 4 dishes, has a per person charge of Rs.750 plus 18% tax adding up to Rs.885- superb value undoubtedly. From the regular-price a la carte menu, the priciest dish is Lobster in Chongqing sauce at Rs.1650, Salt and pepper prawn cost Rs.850 and Chinese Roast Pork Rs.950.

I'd have ideally liked to also taste Lobster in Chongqing sauce, steamed Grouper with coriander and scallions, and Crisp fried lotus stem in home style chilli sauce (yes, I erred in not selecting at least one of these), anyway we managed to sample 12 different dishes that gave us a reasonable idea of this place. The kitchen no doubt has an accomplished hand at handling Chinese ingredients but that pork misfire set me thinking about the number of mid-level establishments the world-over that can execute the same dish on a higher, luscious, pulse-racing note. The ambience, I understand, is consciously restrained but I prefer a sexier or a grander knock-out design to justify the best-in-the-city tag .And will it be a perpetual dream to expect a Chinese hostess who makes you forget about the food?

PS: A few days after this review was published, manager Ms.Namitha Muthukrishnan called by phone, acknowledged the "detailed review", and promised to rectify the shortcomings. 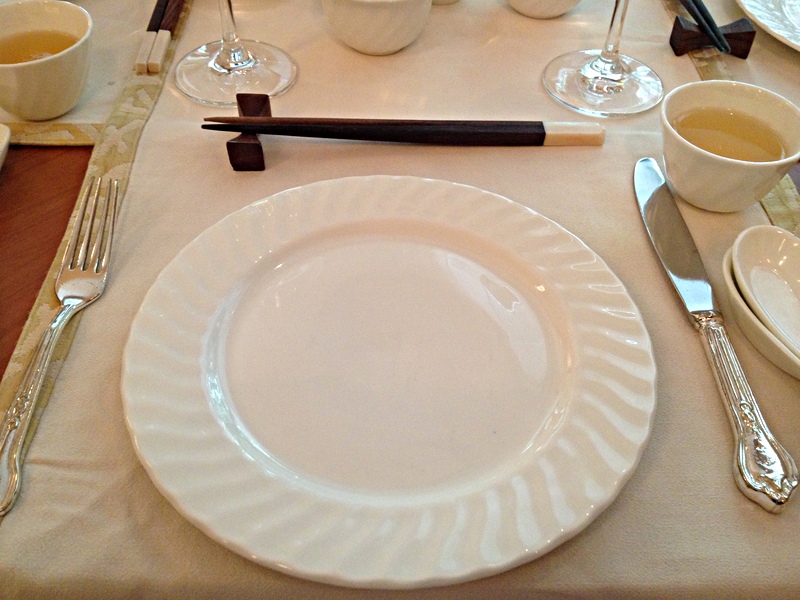 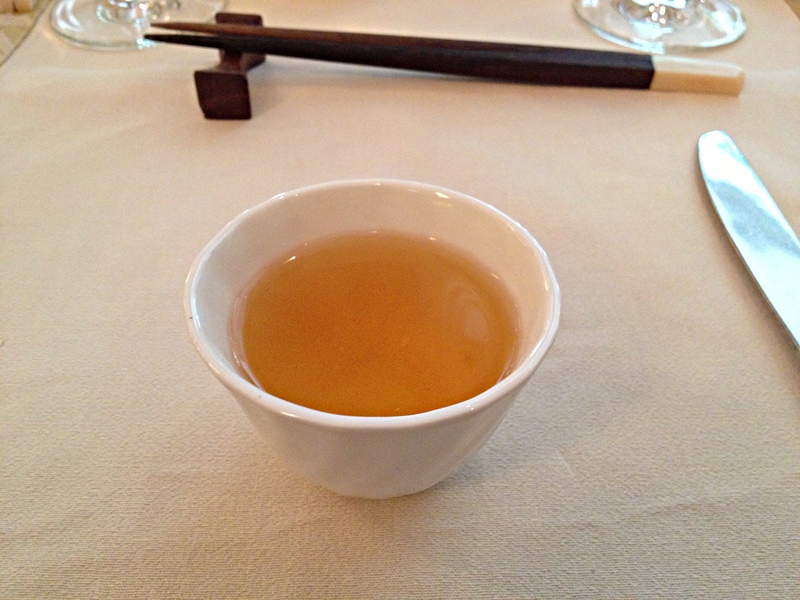 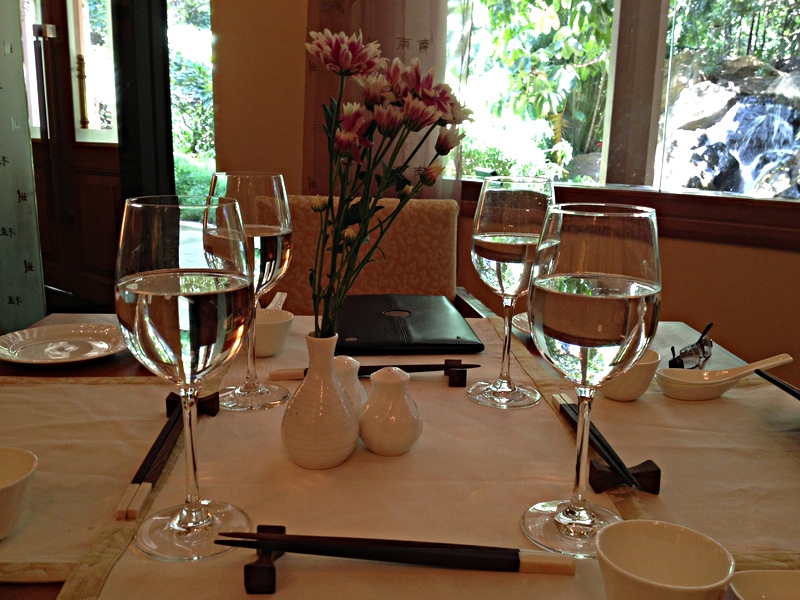 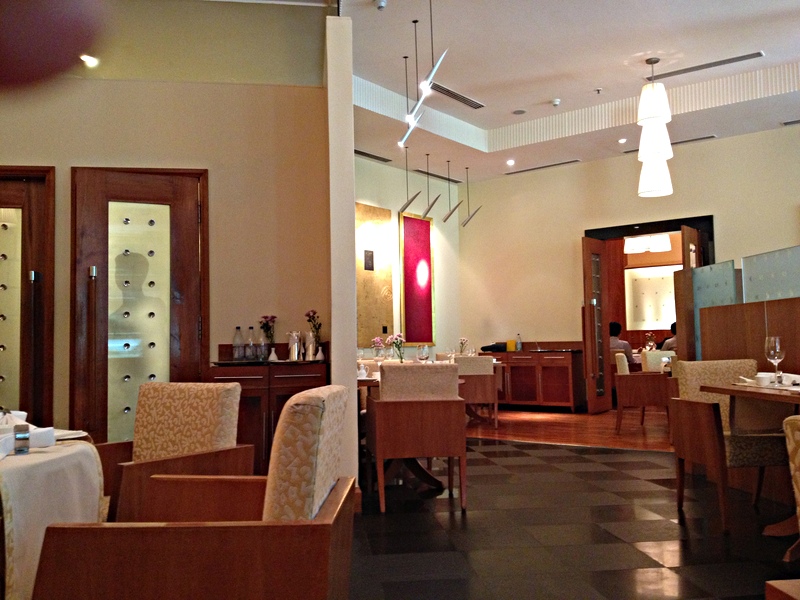 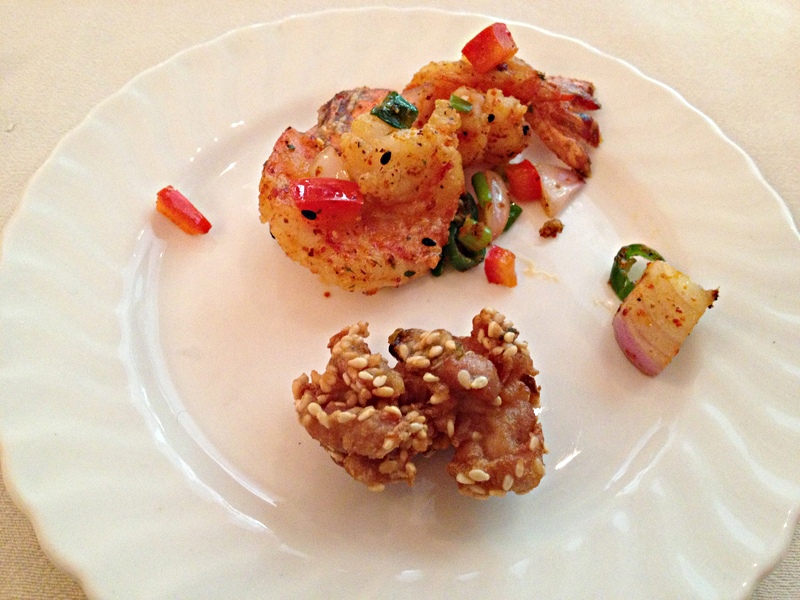 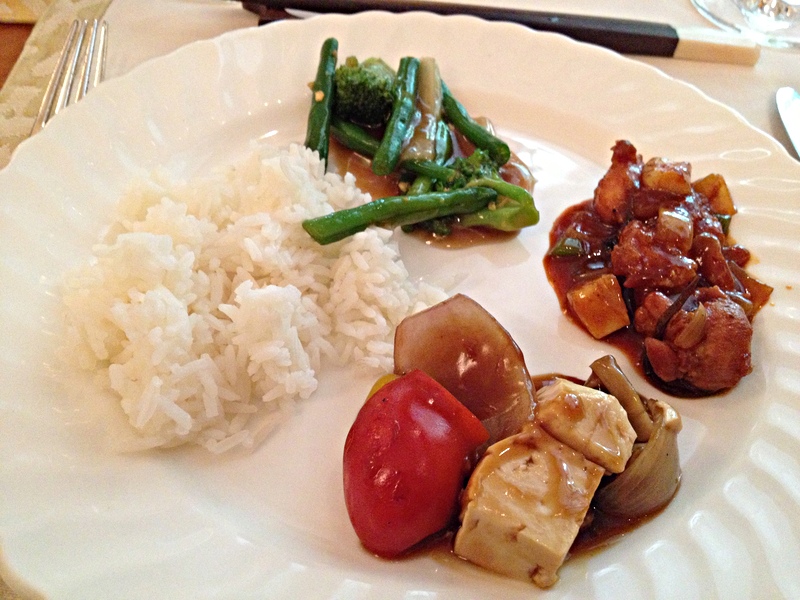 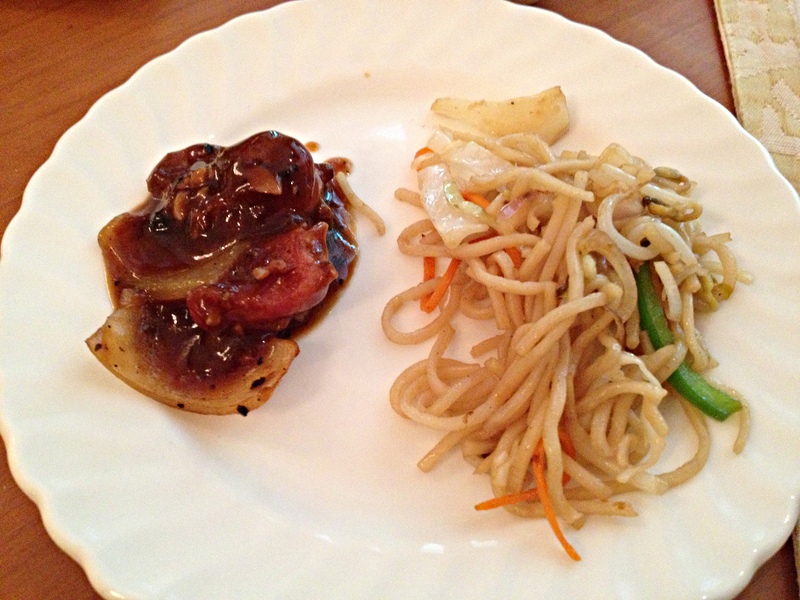 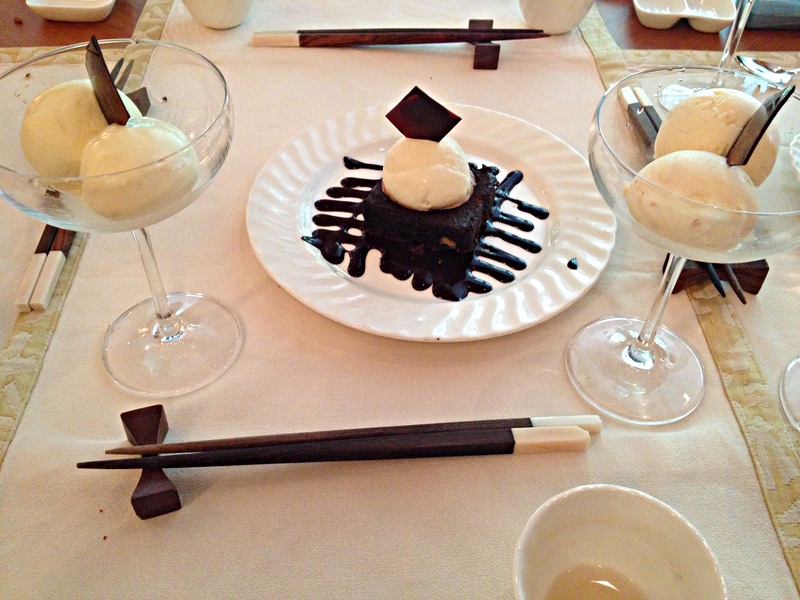 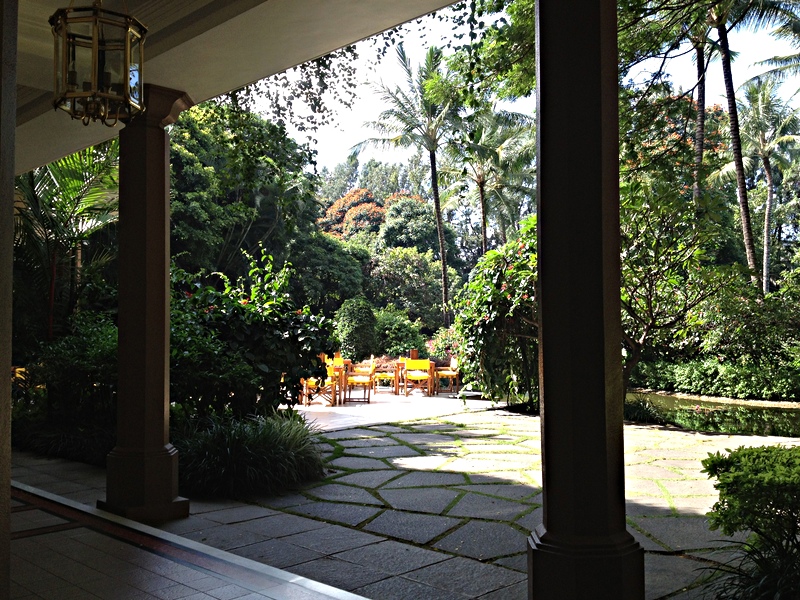