Encouraged by the B’lore edition of Times Food Guide; an excellently written review by Suman Bolar in "Food Travel Bangalore", and a favourable article by Karthik Shetty in "Gastronomical G-spot", I along with a close gang of family members ,decided to have lunch at this restaurant which claimed ,and was reputed to serve fine South-Asian food. The location was 3rd phase JP Nagar, in a commercial cluster off the road that soon leads to Banerghatta Road. JP Nagar is not a bright spot for world-cuisine ,but restaurants serving Indian-style food are not scarce here.Over the years (but not recently), I’ve had excellent meals in Nakshatra and Inchara, while partaking of superb vada-idlis with killer chutney in S.N Refreshments. But that day, we craved neither desi treasure or Indo-Chinese seductions, rather a desire for a tropical affair of exotic flavours swept us towards our post-meridian destination.

We made our way onto the second level of a building in the compound- a sunny deck with canopied tables basked in the afternoon. A glass-walled enclosure offered indoor seating. Electing for al-fresco-dining we settled into cushioned chairs of dark wicker ,with overhead awnings of green-’n’-white stripes. When real-estate agents say that 3 rules of the game are "location,location and location", they’re not joking. Our perusal of the menu and attempts at conversation were punctuated by thuds of the nearby kitchen doors swinging open and shut with noisy regularity. Relocating across the terrace to a table gauzed on all sides by latticed curtains, we plotted our meal.

The menu was extensive with variously interesting and inveigling presentations of both Veg and carnivorous offerings. Their website has a detailed (but not accurately updated) menu .
"Grilled fish in betel leaf" was highly recommended among the starters. This became our very first order. The waiter rewarded our anticipation by returning and calmly stating that while they’d managed to secure the supplies of fish,the kitchen had run out of betel leaf. Visions of a compulsively paan-chewing chef flitted through my gloomy thoughts.

Our hopes soon turned over a new leaf as a substitute-request was placed for banana leaf-wrapped prawns. Another appetizer soon arrived :Golden Veg basket- crisp golden tartlets with minced vegetables,American corn and crushed coriander. This starter was given a quick ending- in a happy way. Minutes after its entry,this entree -with its modest flavours and soft contrasts- had disappeared down eager gullets.From across the table came a remark of perfect satisfaction. No significant complaints from my side, and no hosannas either.

Banana leaf wrapped prawns then joined the fray. It was well-cooked to the point of being agreeably soft (eat the prawn,leave the leaf) but that docility was completely undercut and overpowered by the "Thai spices and chilli paste" enlisted in the dish’s description.The prawn is one of those creatures that offers least resistance when it is harvested for human consumption. To reward that kindness with this kind of cruelty in over-spicing , is inexcusable. Pandan Chicken- the star player was wrapped and let to cook under the auspices of a hardy South-Asian leaf (re-commencing the recurrent theme of meat packaged in foliage) Hearty chunks of chicken were ensconced and absorbed scintillas of mellow tropical-scented flavour .Its accompaniment -sweet soy sauce- drew a mixed response but I felt that it complemented the flavour-gestalt of this novel (to us) enjoyable dish.

Small circular cuts of Crispy squid -a seafood that is not familiar to many Indians, was then sampled. Sadly,the rings lacked zing. They did not pack much of the crunchy-succulent punch that was hoped for, and the garlic-pepper treatment given here was ineffective in packing the required zesty finish.

Aroy’s management, on the website -Bangalore-burrp - frequently responds to the various capsule reviews with assurances of good service but this comes across as an example of staff who are more enthusiastic on the internet, and much less pro-active offline .A feedback card was given at the end but there were no verbal enquiries at all at any stage. The service we received was average at first and outrightly negligent later. Why bother to recruit waiters who look South-Asian and then blithely forget to adequately train and supervize these staff? I remember perhaps an Indian waiter also, and irrespective of any considerations of race, it was felt that the waiters here in general had limited communication skills and no finesse. Yes,they served the food onto our plates (at a VAT of 14%,service charge of 10%,and service tax of 3.09%,one supposes that is a minor mercy) but the charm and excellence of top-tier service was conspicuous by its absence.

The burden of gratification now fell onto the main courses. Ong Noh Khaw Tsuey -advertized as a meal in itself, and endorsed by many a aficionado- caught the eye and enticed our tongues. Soft and crisp noodles,Burmese broth with assorted seafood and a plateful of 8 different condiments would all smoothly blend to form the Oriental pleasure-pot that we savoured. The cocunut-enriched broth was creamy with small bites of seafood added- fish,prawns and mussels. The cameos were played by- Coriander,onion,lemon,chopped chillies,roast garlic,sweet soy sauce,peanuts and sliced egg -these were all meant to be recruited into the mix. Comfortingly delicious mouthfuls followed...a delectable example of "the whole being more than the sum of its parts".

Black olive fried rice- Intrigued by how the tart toasty flavour of black olives would blend in with the rich smoky aroma of perfect fried rice, we requisitioned this second main player. There had been a disappointing dichotomy noted in the starters -each good dish was followed by a bad one. The main courses amplified this unwitting contrast. The flavour of diced black olives got lost in the mix, whereas bits of black bean paste gave an unappetizing sharpness that precluded the emergence of any subtle flavours. ’Twas a failed marriage of ingredients, every spoonful like another thankless day.

We sought respite with a honeymoon in the desserts . First attempt- Coconut custards of a light halwa -like consistency were set into slices of steamed pumpkin and served with ice-cream. I diligently took parts of each of the trio into a single spoonful and later offered my approval of a presentation that seemed to successfully combine variously soft textures into a cool-creamy concoction. The other experts did not concur, and to worsen matters the discreet connoisseur in me was bluntly attacked when an unceremonious remark alleged that I had bad taste in desserts! Second foray- .. Water chestnut rubies with coconut-jasmine syrup and shaved ice. This description is enough to tickle many a sweeth tooth - and ours too.

But the proof of the pudding, sadly or happily, is in the eating - our tasting yielded the crispness of water chestnuts but the crucial complement that should have afforded by a dulcet elixir was not quite there. The coconut-jasmine syrup had a slightly fermented after-taste that robbed the dish of its delicate joy.

Before the dessert however, a comedy of disregard ensued. Our waiters became phantoms and simply refused to turn up. Emerging from our ''''tent'''' after a significant wait,I scanned the near-deserted deck and saw a waiter who was standing atop a high ledge which projected from the wall near the entrance. If I had arisen from a shady session in a hookah-bar, I might have rubbed my eyes to re-check ,but now in broad-daylight with keen searching vision, his strange location struck me with amusement.Probably from that vantage point, he was surveying the suspected entry of thieves out to steal the chef''s recipes, but after noting that I was an innocent customer, he ignored my beckoning gestures and continued his vigil. Thankfully, one of his pals eventually drew up.

We might have conceived a more favourable opinion of the food served ,but the hide-&-seek nature that the waiters eventually assumed, exasperated us. It is no exaggeration to say this. The menu had dozens of dishes which beckoned our interest ,but experiences like the one we had, drive people away from a restaurant rather than towards it again.

Aroy's chefs are good, but they still need a recalibration of their culinary common-sense and finesse, while the service staff need a upgrade from the complacent level at which they blissfully wallow. It is an outstanding restaurant if you want to enjoy an undisturbed post-lunch snooze. Lesser adjectives will suffice to describe its other merits. 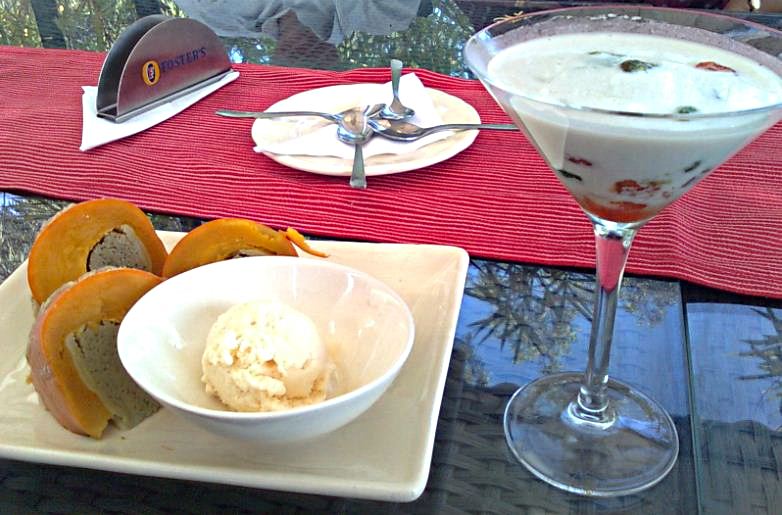