This review is best enjoyed, for formatting purposes on a laptop, not a smartphone.
Industry Zen : Restaurant Review
2.75 stars out of 5 ( Close to Good )
Auckland, New Zealand
Visited January and February 2018
Presented as Part I  +  Part II
Kaiseki meals are a mirage in Auckland. Almost all if not all Japanese places in town have an overtly unimaginative mentality, favouring small eats over truly transportive dishes of substantive nature. As for specific smaller items, like super-premium tuna or "Toro" which is very rarely found in New Zealand, I had located it only in the admirable "Cocoro" where alas the pre-applied wasabi had precluded my full enjoyment of it. That is why chancing upon "Fatty Blue-fin Tuna" on Zen Industry's online menu was an exclusive, very exciting surprise. Who knew ? - they might pack in some elaborate fiestas as well. 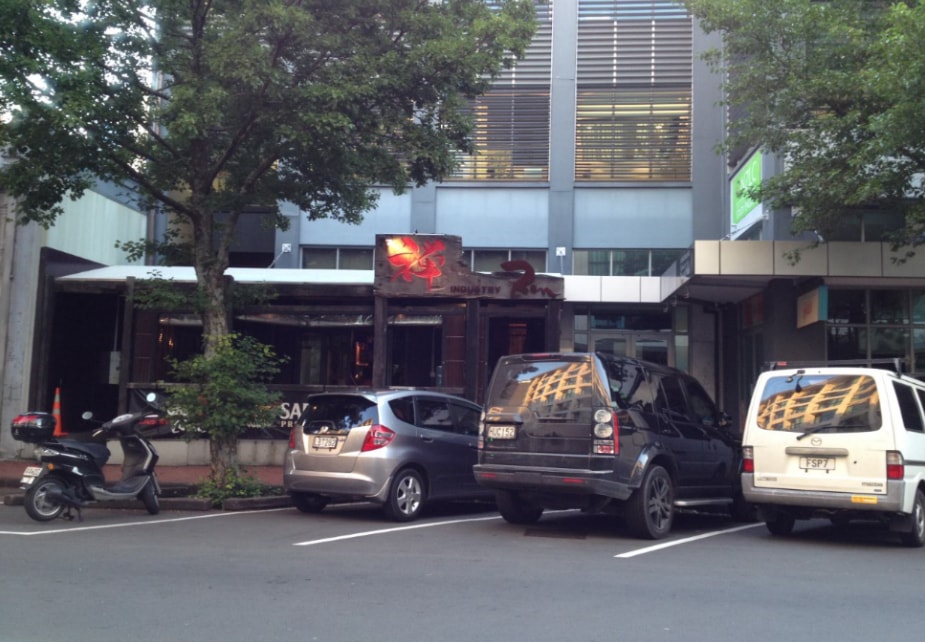 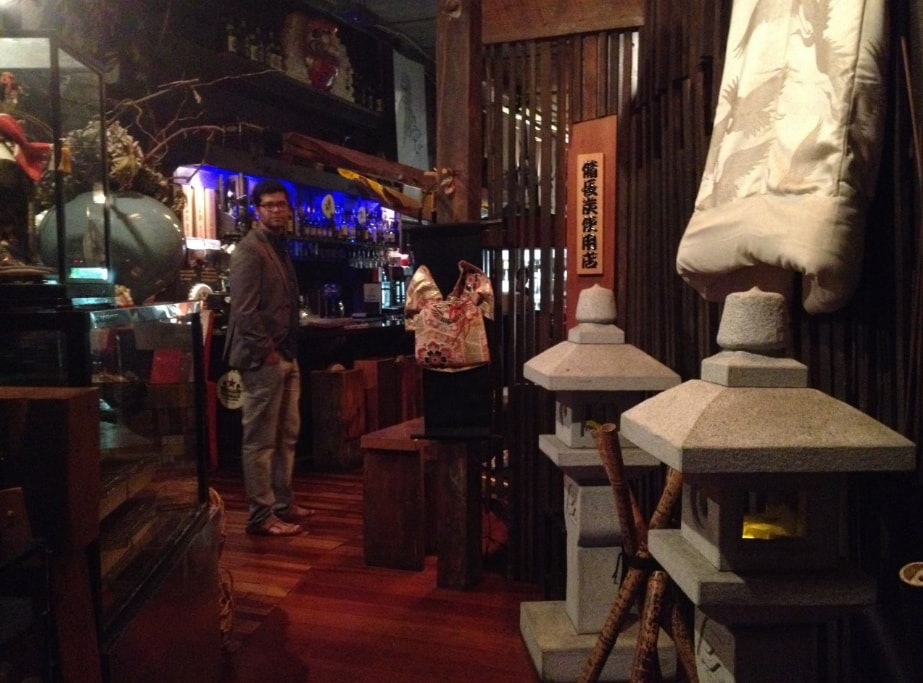 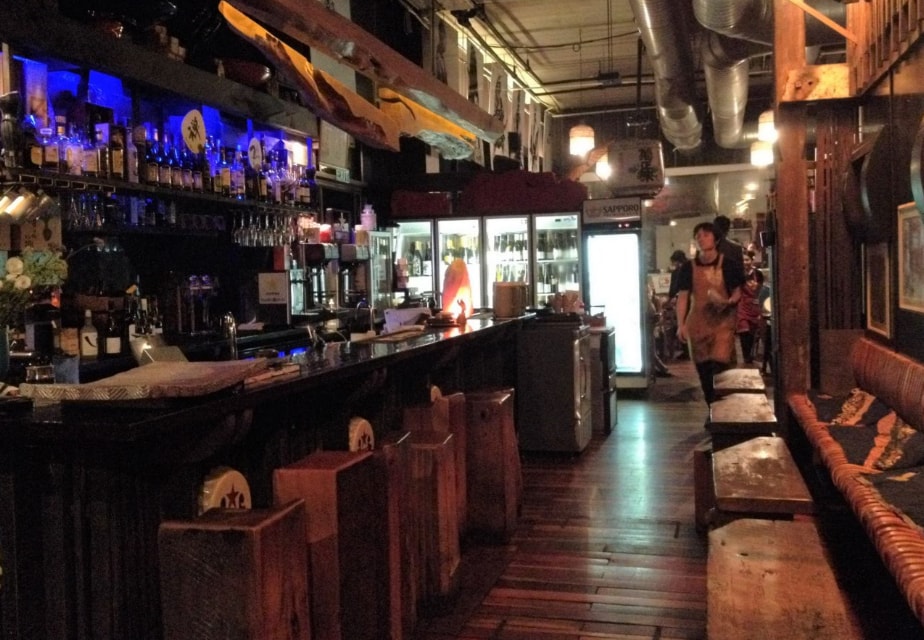 Truckloads of dollars have been poured into setting up this place in Auckland CBD, and the effect is generous. High ceilings open up a commodious dining space in the centre of the restaurant, like a large medieval court. The restaurant's title reflects in the spartan airy esthetic, deliberating eschewing prettiness and using lots of provincial-style wood. You glimpse a picture of Buddha tucked away on a side wall, an ornamental barrel of polished wood just off the hallway, a cluster of wine bottles mounted high over the stacked plates. Near the entrance, the long bar area leads to a couple of curved screens that form little booths, well suited to an cozy session for two.
I straight-away requisitioned their marquee Sashimi. Akami Maguro (lean tuna) had a gently intense, lingering flavour that you'd be hard-pressed to find in ordinary tuna that plies mass market joints. 'Twas fruit de mer in the truest sense, because its  refreshing delicacy and cool succulence is more evocative of fruit than meat, the taste subtly intensifying as you chew on, with a degree of aftertaste that I was actually expecting from its fattier counterpart. This latter offering - O Toro - is the super-premium ultra-fatty tuna very rarely found in New Zealand. It tasted like a very soft, melting slice of cucumber, and although I was disappointed, what had come before, sufficiently mollified me. 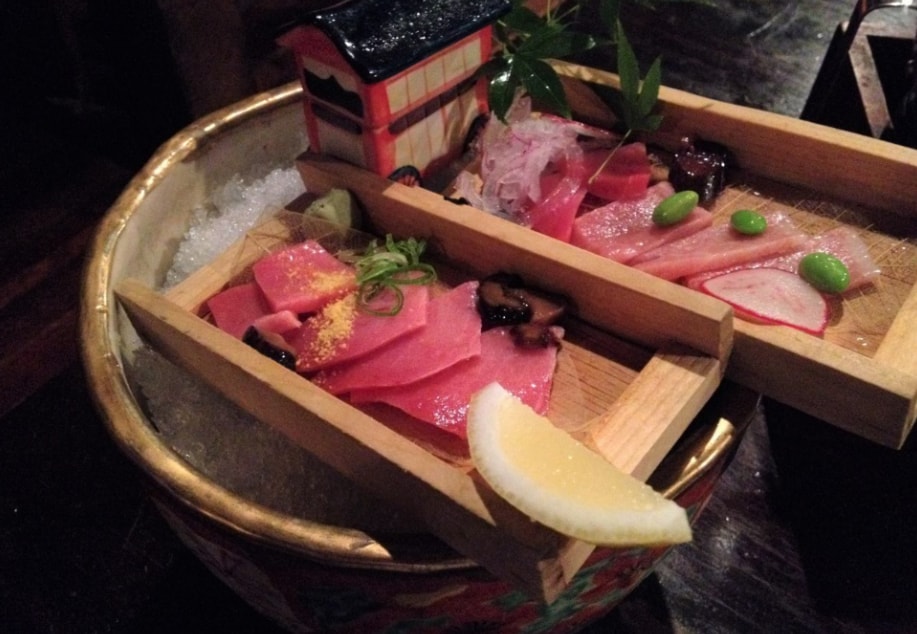 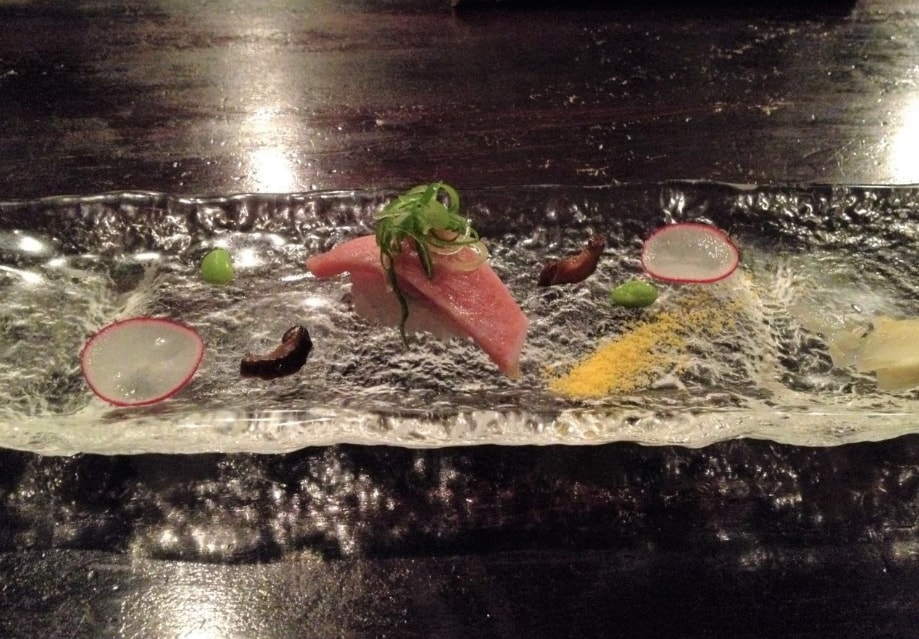 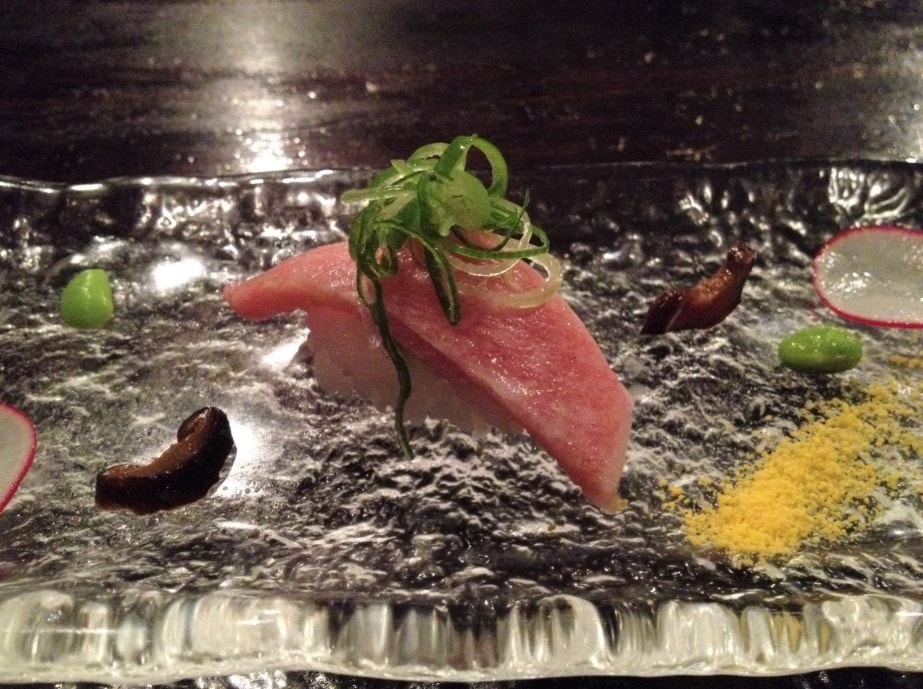 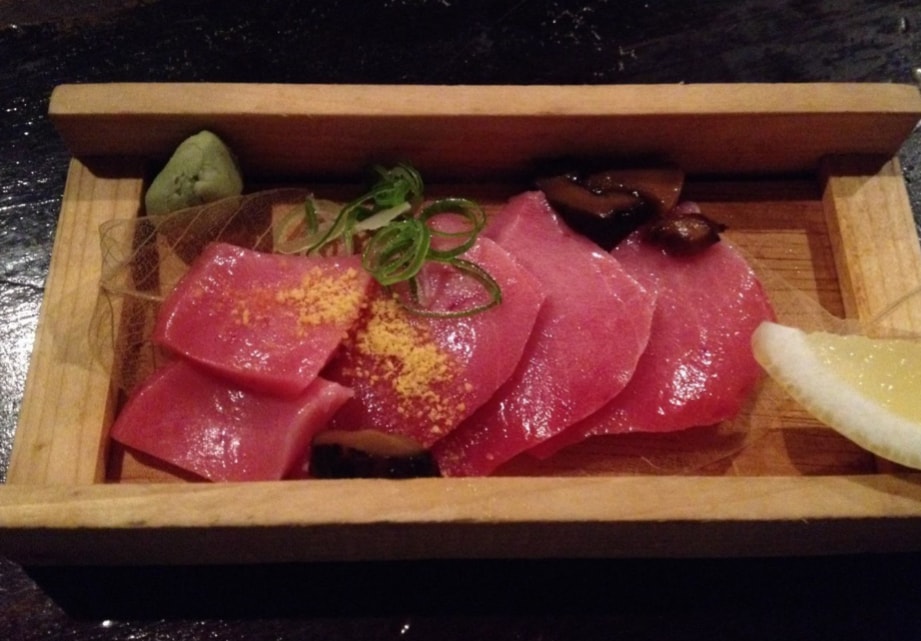 I looked around at this vaulting unique space, its gestalt not that different from the same CBD's Matterhorn (which prematurely departed). Hefty-bellied air-venting pipes dominate the ceiling, and an industrial-looking grill-counter is set to one side, subtly sectioned off by a glass screen, with some remarkable touches like a series of large posters suspended high near the ceiling, depicting powerful sketches of Samurai warriors. Rather than native coiffed hostesses rustling their beautiful silks to softly minister to you, you're subliminally more keyed up to expecting Yojimbos suddenly erupting in clashes here. 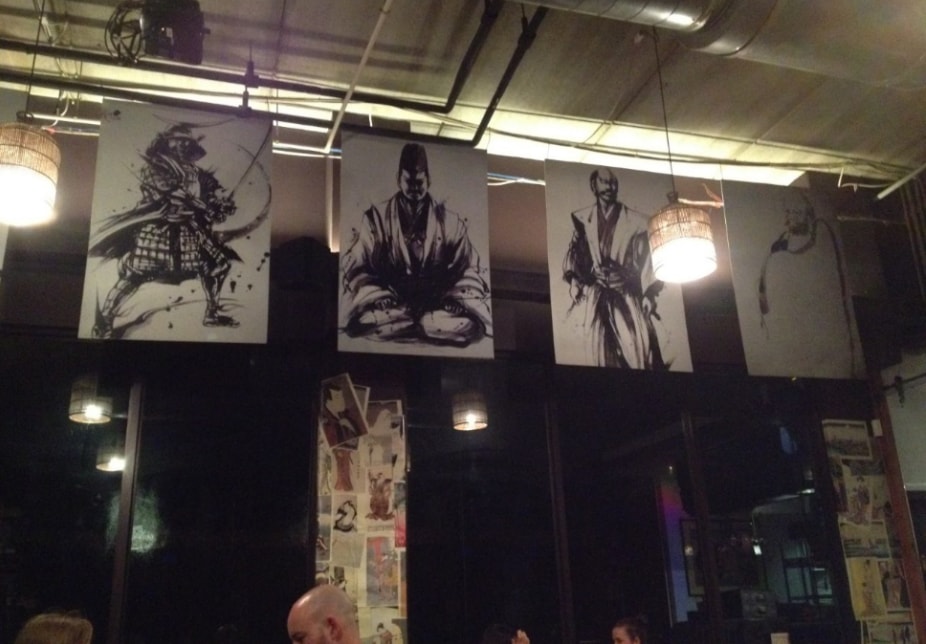 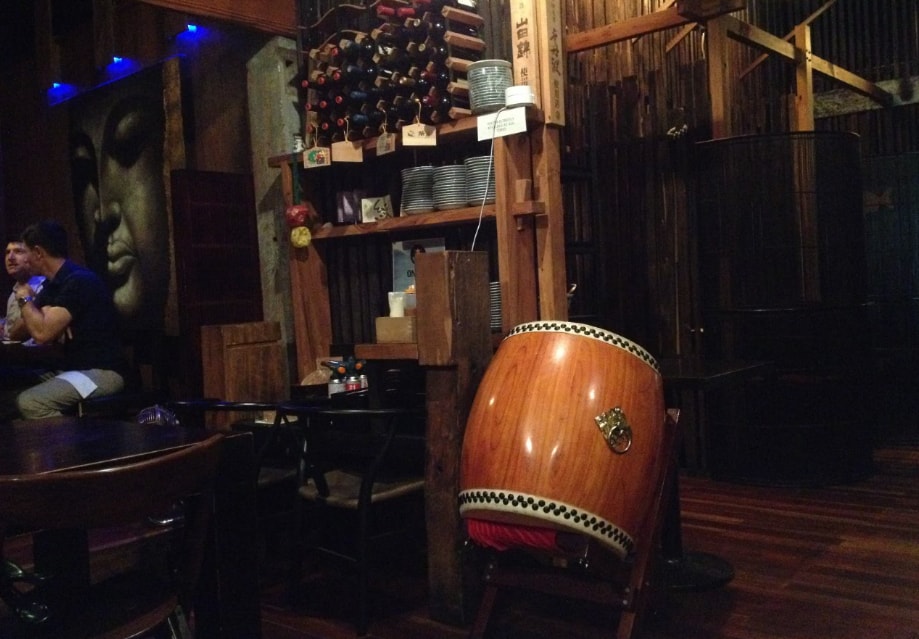 My hostesses on this first visit were young Japanese ladies of very nice demeanour who attended to me in a most agreeable way, with a gentle voice and smiles. They noted that I was struggling to finish my main course and initiated a welcome offer of take-away (boxes, not them).
Three Long Jumbo Prawns ($14), topped lengthwise by lines of mayonnaise and teriyaki sauce, were excellently crunchy and very tender within. But with prawns it's all about that delicate, infinitely haunting flavour which was stymied here by that pre-applied sauce. 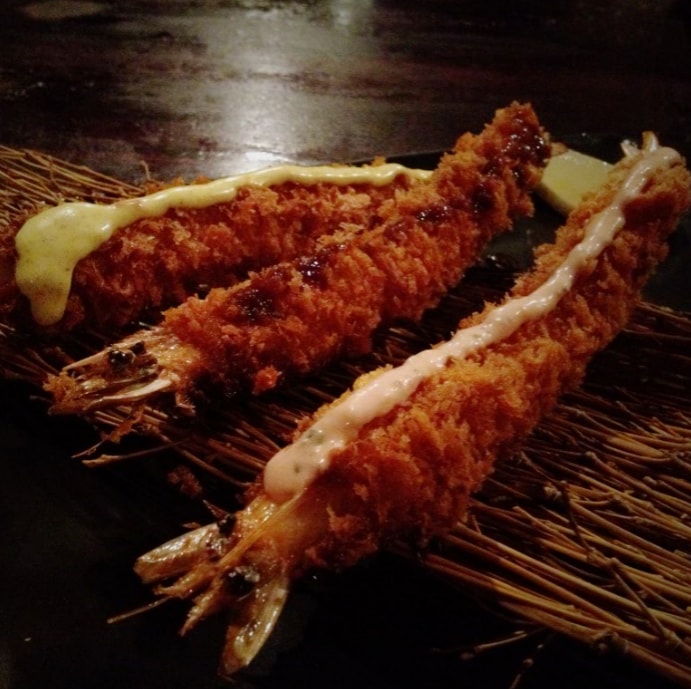 I really cannot blame that fine sake I was quaffing, for making me rather pusillanimously select "Chicken Katsu on a hot plate" ($20), as the main course. For one, I should have pre-figured that after the fried prawns this would be one awesome batter too many. Nice flat hunks of the said meat - superb fried cutlets they proved to be no doubt - were presented on a sizzling base, and when the nice waitress briefly checked my permission before thoroughly drizzling mustard and teriyaki sauce on that resplendent expanse, I did not have the sense to ask her to limit those unholy anointments on just one half of the golden hide.  Chicken Katsu by itself is teenager grub, and drizzling sauces on it makes it toddler cuisine. That liquid topping is also a unwitting  way to soggily undo the accomplished fried work. All the minimalism and stunning sophistication of my au naturelle starters were thus eventually kamikaze-strafed by a failure of the patron-pilot's imagination.
I knew I was on my way to atherosclerotic hell , but only hoped that they should somehow jet me off to the CV-ICU of Tokyo's finest. After recovery, I might just saunter over to check out the real deal with some of those local Katsu havens.
II
The menu had changed subtly yet significantly on the second visit. The previous one sported interesting sections like "Seasonal Specials" , "The Tofu", "The Blue Fin Tuna" , "The Bigger Bites". The new one, though it retained most of the dishes, jettisoned this episodic flavour and lumped most of them into more generic sections, shoving the narration style closer to a mass-market Izakaya.
On this second expedition , I was joined by my BFF. Both us bravely elected to commence the innings with Tako-wasabi, pegged at $ 6.  I suppose you could do worse, like buying a bottle of Green Chartreuse for $ 86. It predictably had a sharp wasabi nip no doubt, but the crashing downer was the cold octopus cut up into little pieces, still having a crispy bite, alas sporting zero flavour aside from that alien wasabi. After a few bites, I could see no more sense in eating this bizarre concoction which could hardly be called food. I gave it a 1 out of 10 , and my best friend perhaps as a reaction to that,  partook of the dish for about forty-five minutes, giving it a 7 and later upgrading that score to 8.  Restaurants sometimes bring out the best in people.
Clockwise : Tako-Wasabi , Veg Gyoza , Sashimi : Tuna, Salmon, Harumaki Prawn Rolls 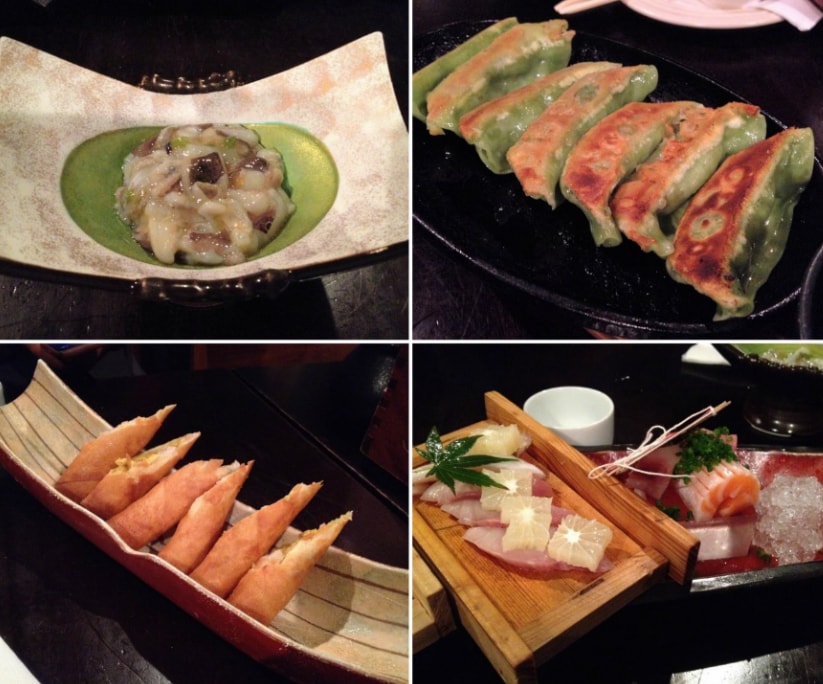 They pegged back matters with Agedashi Tofu ($9). These large medallions looked like large luscious scallops and were voluptuously slippery soft, its exterior roasted to a pleasant crisp, nestling in an umami-forward soy broth bolstered by bonito flakes. 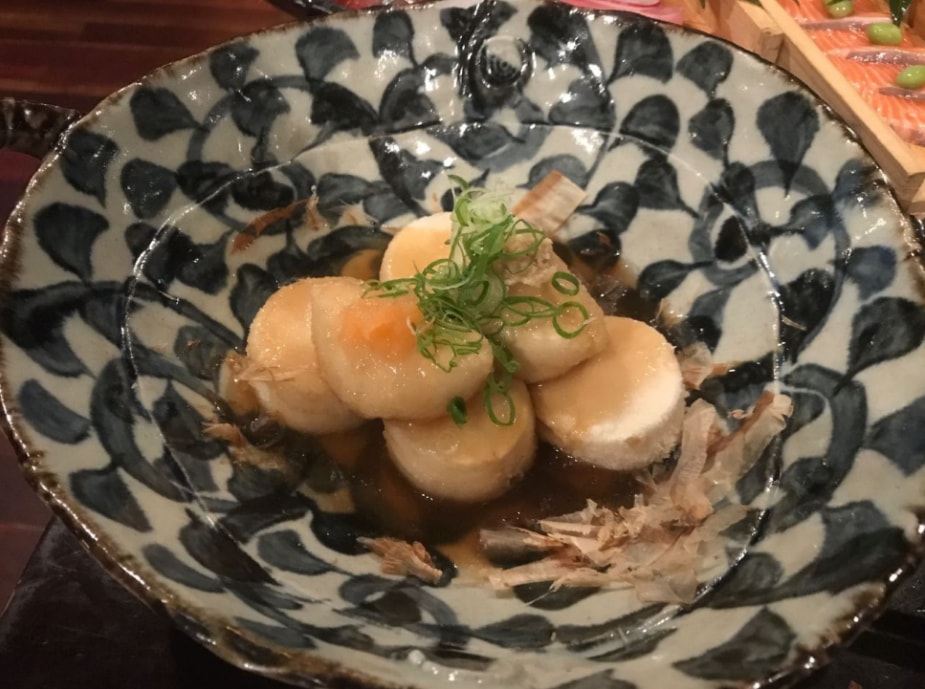 My abnegation of pork has often made me sacrifice ecstacy whilst stumbling upon the alternatives. The technically competent Vegetable Gyoza (flat stuffed dumplings) had good karma alright but its filling lacked character. Harumaki Prawn Roll unwittingly represented why Zen Industry is not an altogether superior restaurant - when the kitchen can make splendid panko-fried jumbo prawns, why not use the same technical flourish to distinguish these rolls which had a ho-hum coating and a simplistic filling of the ingredient that was no different from tired mass-market prawn twisters ? The chef does not go that extra imaginative ounce to well and truly tip the scales.
What makes a great proprietorial presence even when you don't see it ? Aside from a bravura kitchen, it is kick-ass service that tips one off about the behind-the-scenes planning and envisioned coddling. On the second visit , our young Japanese maidens were again pretty alright but they seemed newly hatched from the Izakaya nursery, perambulating in their kimonos around the busy room, perhaps lacking the time and certainly missing the savoir faire to pamper their patrons. I wanted to shake, not them, but the orchestrator and ask why these nice hostesses could not be better channelled to charm their guests.
We returned to the cuisine with the Fatty Sashimi platter ($28), whereby Zen Industry again revealed that it plays its best game with Sashimi. Flat-out wonderful presentation and beautiful colours seduce you much before the tasting, with a long catamaran-like platter over which wooden boxes obliquely flow, decked with glistening maple leaves and jewel-like garnishes. There's the lean tuna again, subtly brilliant, almost like watermelon, but with an unmistakeable marine undertug that distinguishes its identity. Creamy lushness oozes from the beautiful orange of salmon striped with fat. And there's kingfish, sashimi-grade no doubt but with a little fishy sharpness, more intrinsic than extrinsic, the only one of the trio that significantly benefitted from the counterpoint of soy sauce. 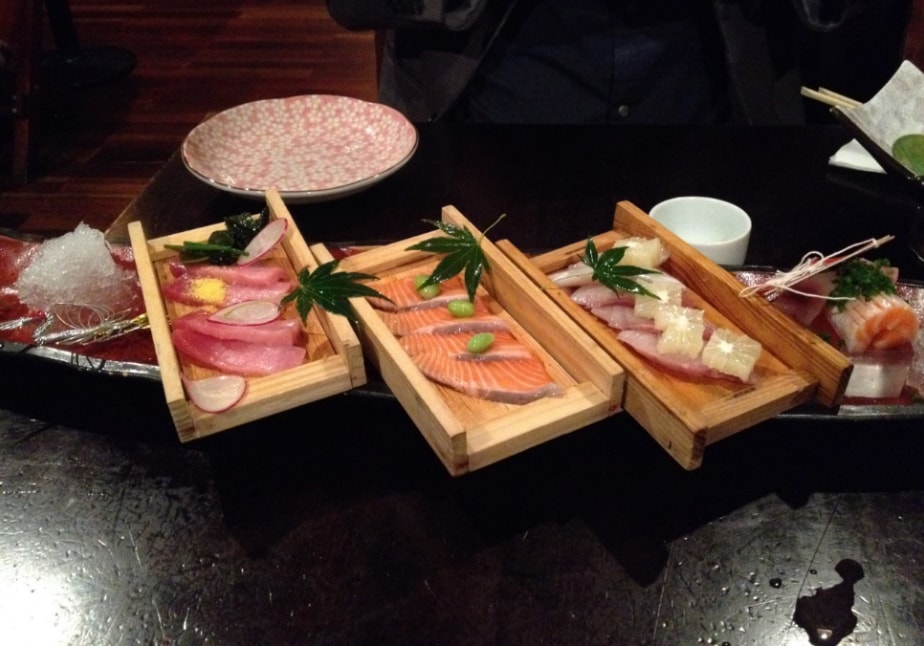 My friend liked it too but eventually admitted that as it is just raw fish, he could not truly admire the cheffing behind it. I proffered how quality ingredient sourcing, the precise cutting and the presentation all add up to something that is beyond the pale of many chefs.
The best part of  "Hokkaido Scallop with Yum Yum Sauce, and Scallop Sushi" ($24), was the latter - a small side-show illuminated by the table-side theater of blow-torching the sushi, which was slick with mayo and avocado, and unctuous with caramelized goodness. The Scallops may have been from Hokkaido but again lacked the luscious sweet flesh makes scallops such an underheralded luxury. These were doused in unremarkable mayo-based spiced sauces which alas danced in vain around a lackluster protagonist.

The rest of the mains looked ho-hum on the menu - offering little to the discerning diner looking for something more than associate bites. A Robata grill section looked great with delicious-sounding skewers, but aside from us being full, I'd already had enough to synthesize a synecdoche.
Zen Industry ultimately offers limited treasure to the patron looking for cultured Japanese fare of elaborate proportions. There's no Omakase either. What you do find are small eats offered in two dozen other innocuously "ambitioned" Japanese joints in the city. I entered expecting some true Japanese quiddity, while eventually discovering only more overseas pusillanimity.
UPN
UPNWORLD welcomes your comments.