This highly regarded South Indian restaurant brand of the 5 star ITC group, popularized all over India by industry icon Habib Rehman, first caught my attention 3 years ago when I walked past a glimpse of its impeccably decked interiors enroute to Raj Pavillion for an unlimited food,champagne and alcohol extravaganza (I ate my first octopus that day). So this time I took advantage of an attractive offer by Restaurant Week Bangalore, sponsored by Citibank, hitched up my figurative mundu, and set sail through the insane eddies of Bangalore traffic towards this grand old institution of the city.

Swinging through the arcing driveway leading up to the hotel, our car was stopped ,as usual, at the intermediate checkpoint where the vehicle's boot was checked for weapons of mass destruction before we were allowed to circle into the hotel's forecourt and be deposited at the entrance at which we passed through metal detectors (I don't mind a strip-search by a femme fatale) ,past the posh aristocratic lobby, and reached the unassuming carved-wood portals of the restaurant where we had to wait for an undesirable minute before the maitre'd caught sight of us and hurried to escort us towards our beautifully set table.

Ambience 8/10 - Elegantly traditional - a cross between homely wife and South Indian duchess. A large chandelier with crystal tentacles is suspended near the entrance, walls are cream-washed while auburn carpets cover much of the marble floor which is white with green borders. Sound levels are gentle. The pillars which hold up the vaulted ceilings, have splayed mid-sections that sport tiny bells at all 4 corners. A subtle South Indian temple aesthetic runs through the entire design, which also sports latticed wooden screens. Table-settings are suitably deluxe with tones of gold, green and crystal, but a lot of sex appeal from the table-top gestalt is lost when wine glasses are taken away from teetotalling tables.Cutlery is made of silver (perhaps that is why they are reluctant to replace spoons with scuffed concavities) while tablecloths are of patterned beige. Comfortable chairs of dark wood are inset with green cushions. A quartet of gleaming gold-plated jars at the centre hold condiments,while another refulgent vase holds a spray of jasmine. At the back, beneath a classily painted modernist sketch of figures sporting sitars, a stage with instruments is set for Carnatic music but a live performance was not held on the afternoon of our visit.


Meal -6.5/10 A generously served standard-issue affair with a few much-needed highlights to perk up this five-star experience. A basket with a variety of papaddums and rice crispies (no complaints here) was served with 4 types of chutney -tomato, peanut, coriander and coconut.The latter two were excellently restrained and pedigreed -they helped to more easily chew and swallow Kozhi Sukka Varuval - small strips of fried chicken which lacked freshness,crunch,flavour and juiciness. All of these qualities were present in Prawns Dakshin Yera - the excellence of which would have reached perfection had more of the prawn flavour come through.Anyway, my father praised it to the heavens.

Kothmiri Kodi -curried chicken in a green gravy that toplined coriander,poppy seeds and cashews ,would probably draw a nod from me if I was starved for a day, but Melagu lamb combined pepper and tamarind to create a hearty winter-combating "kari". Kai stew -a cousin of the Malayali aviyal and the Konkani valval - finely blended coconut milk with the barest undercurrent of spice -and the vegetables in it contrasted well with this rich, intensely pleasant broth. This easily outclassed its vegetarian competitors - I've eaten zingier tomato pappu in far less privileged environs, shallots in tangy tamarind (Ulli Theeyal) compensated with their zesty notes, the spinach of "soppu kootu" did not make an arresting case, while ghee-laced dal hijacked the first component of "cabbage kalasu koora".

A starter of Vadai was a specimen of high credentials -its crunchy exterior ensconced a soft core that overall created a delicate aura of spiced lentils. Mamsa Saaru sported lamb in a coconut-based Mysorean spice blend and the same unremarkable quality was reflected in a spicy, tangy Kozhambu of fish the flesh of which lacked softness. The overall quality of the meats, alas, was average. I managed to have a spoonful of Bendakkai Veppadu -Fried Ladysfingers/Okra- it bore no memorable flourish :- my mother, who has synthesized thousands of vegetable stir-fries over the years, concurred.

Rice -Pulav was forgettable, while cococut-rice, with tiny slivers of sauteed onion, was flavoursome but not meltingly soft. Appam was texturally accomplished and remained only for a short while in the mouth.

Desserts - were smartly presented in silverware with a banana-leaf base.The much-praised Elaneer payasam - tender coconut kernels in cardamom-flavoured coconut milk - was a refreshing elixir that was surprisingly light no doubt but I am very familiar with this as my mother makes an aromatic sauce of the same caliber to go with rice noodles (seviya). Adai pradhamam was a light high-quality pudding of rice flakes simmered in jaggery, and given creamy tones by cocos nucifera milk. The least impressive of the lot was Basundi - a rich heavy reduction of saffron milk that makes short work of your diet-watching plans.

Service 8/10 -Discreet and quiet, with a clear customer-pleasing drive. The service for us began unremarkably but then the staff ,in addition to their regular drill, subtly took on the task of attending to what we specifically wanted. When I first informed them that we would taste each other's dishes to get a fuller understanding of the entire menu, the server (impeccably clad in a mundu/lungi) went on serve an individual menu's offering to two diners,though they were not obligated to do this .Staff , when faced with other requests too, admirably think of how to execute it and appease the patron, rather than how to turn it down. They were unhesitant to serve complimentary dishes. They voluntarily requisitioned feedback (Mr.Satish impressed us with his concern) , assured us that the chef would recalibrate the errant renditions henceforth, and when my father complimented them on successful dishes while reporting that the chicken was not up the mark, the manager Mr.Janarthan (grave-faced but strongly service-oriented and humble) insisted, despite us dissuading him, on speeding to the kitchen and bringing back two bowls of Mangalore Kozhi Gassi whose chicken was more succulent than any of the meats previously presented, with a sprightly curry to back it up.

Though Dakshin usually features 5 star pricing with a meal for two having rich potential to simmer well above Rs.3000, our Citibank restaurant week offer gave us a terrific tariff (considering the multifarious items sampled) of Rs.750 per person minus tax, which when garnished with 14%VAT and 5% service tax, came to an eminently reasonable Rs.2687 for 3 people.

It is not unjustifiable to posit that Dakshin's chefs may have let their guard down for our meal, and the disconnect between our meal's highlights and the rest of the offerings hint at this. But the eager-to-please service and first-class ambience played a further part in mollifying me. The place thus makes an able case to rank as a splendid venue for entertaining a guest who wants a South Indian meal in deluxe hotel settings.

Your feedback is important - Please let me know your opinion. 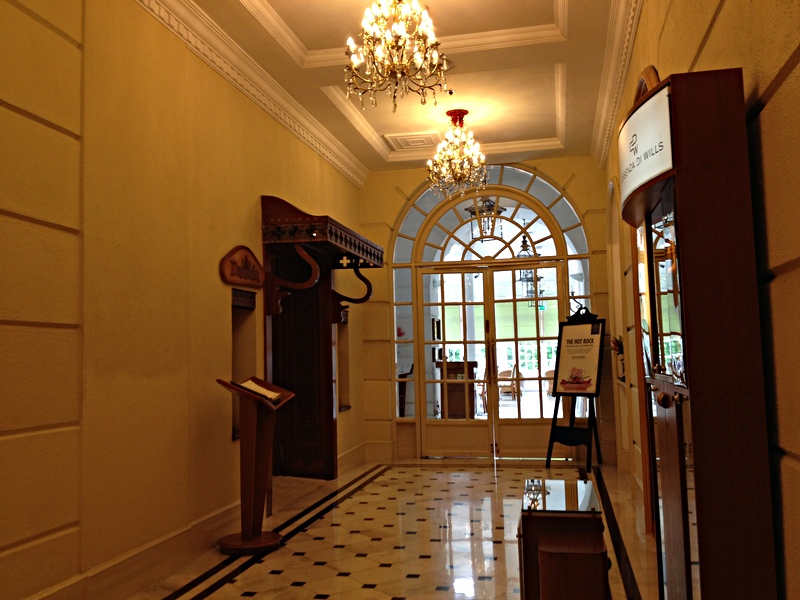 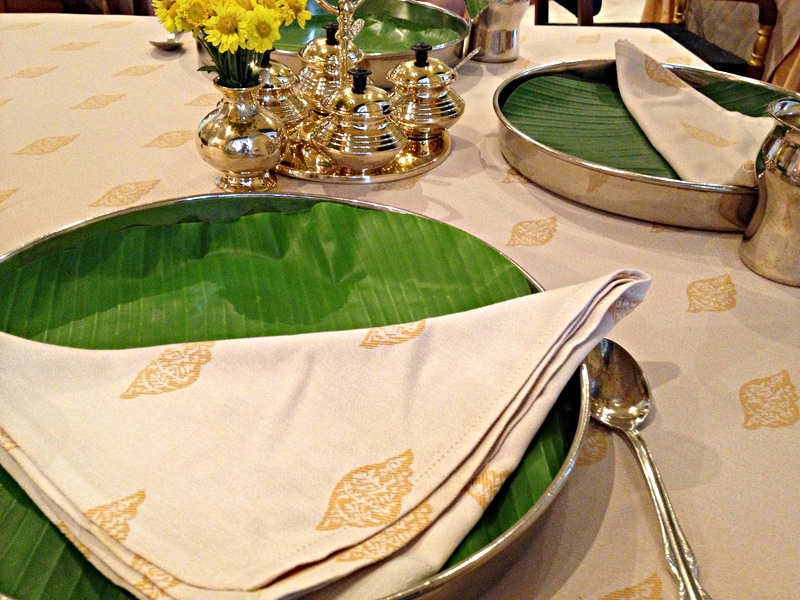 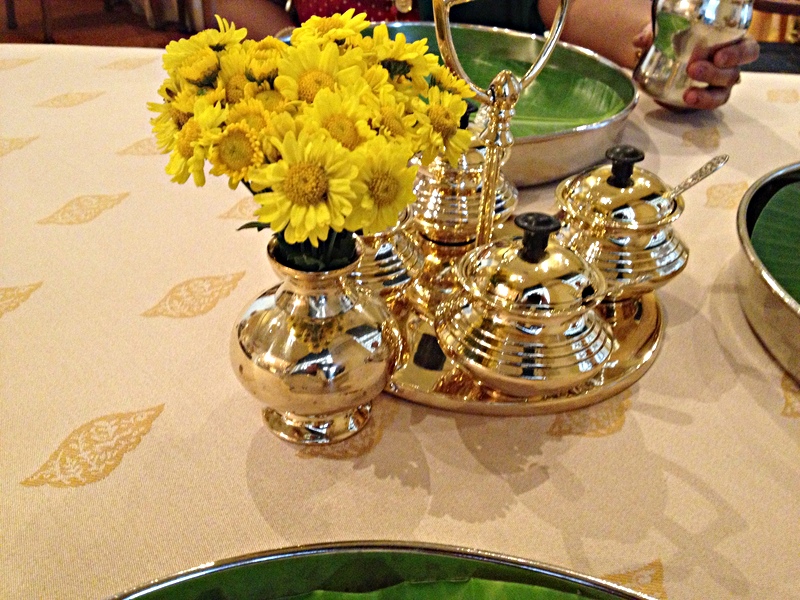 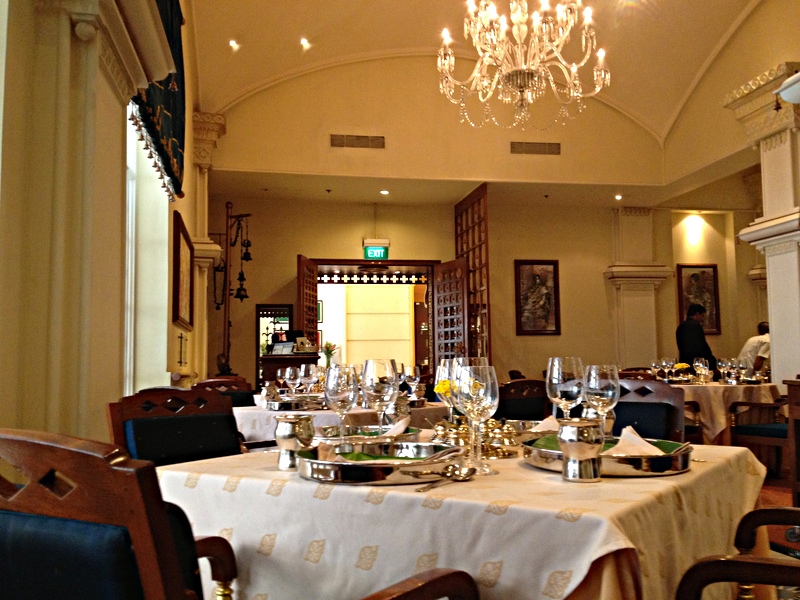 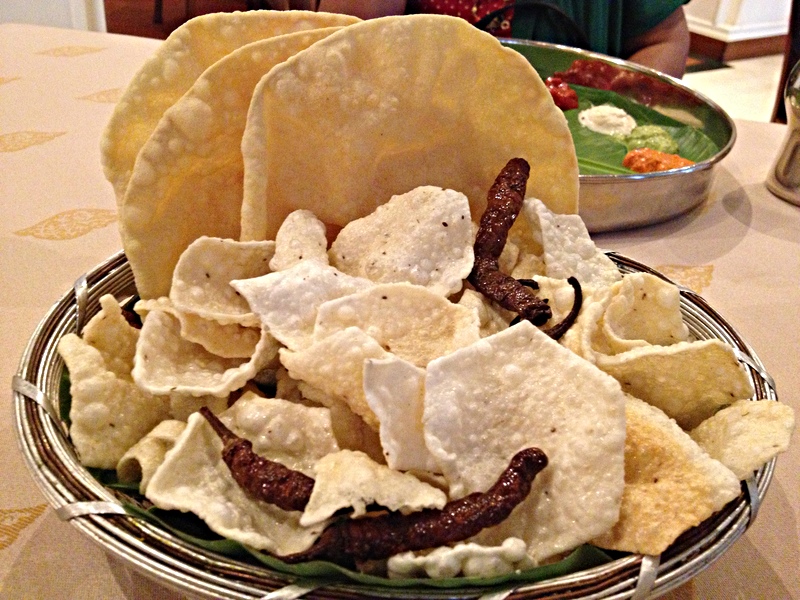 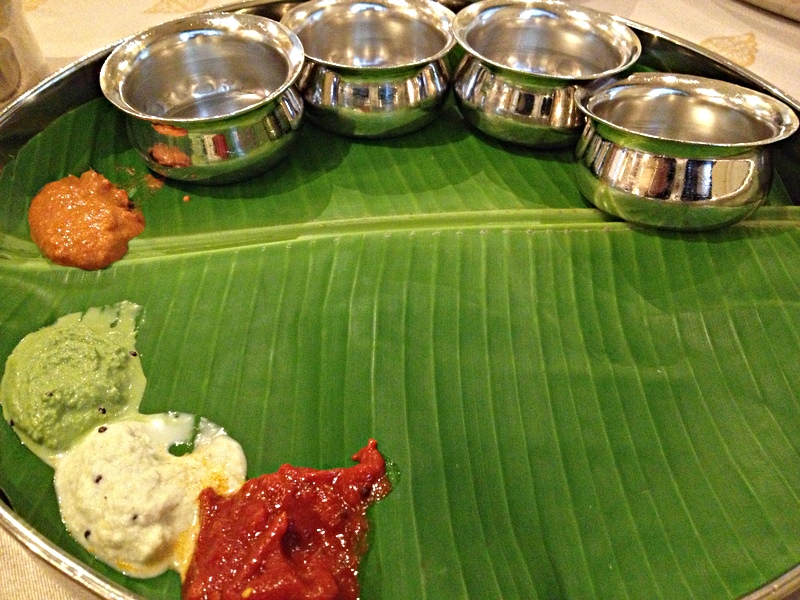 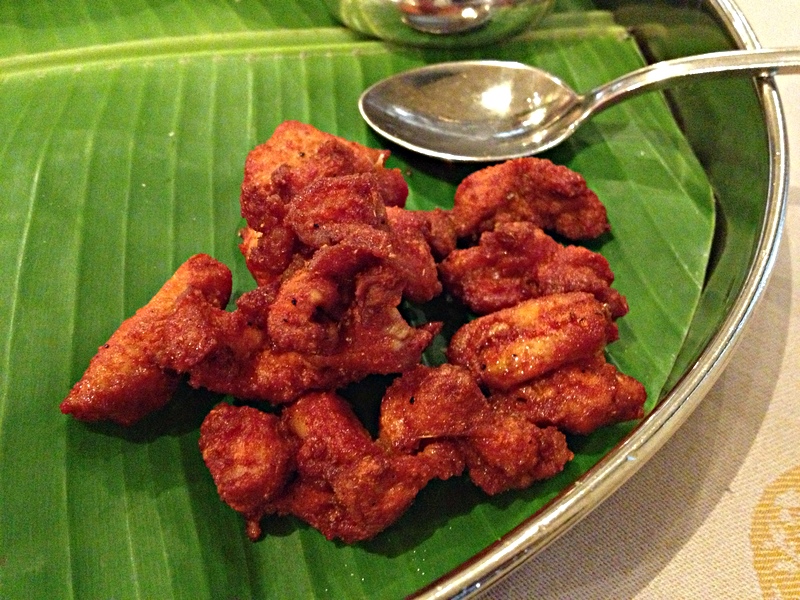 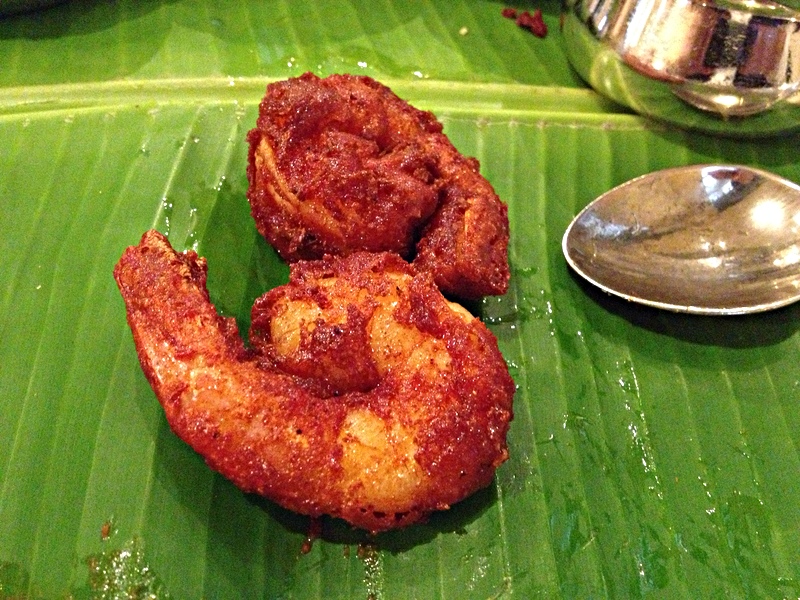 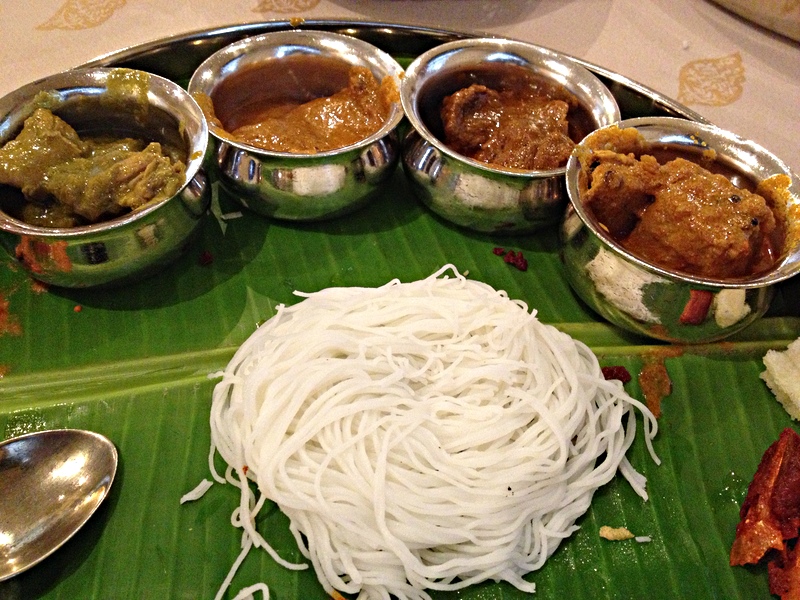 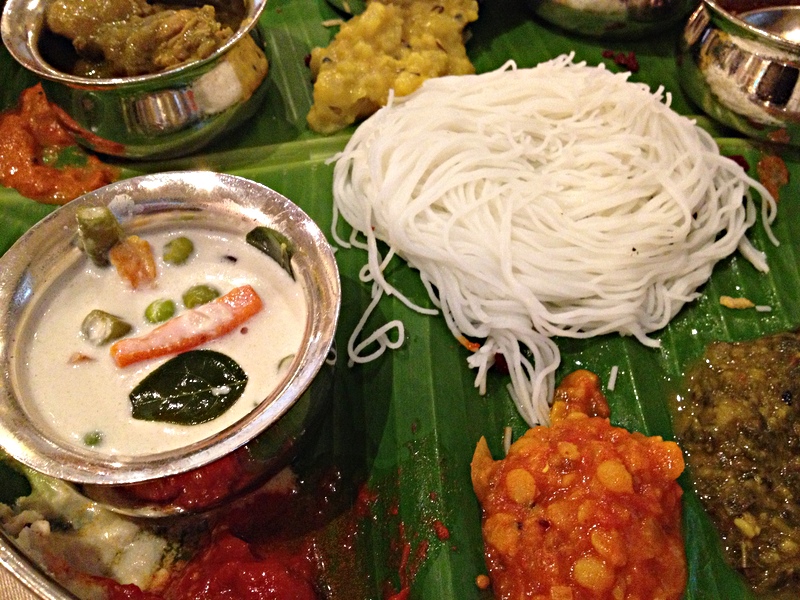 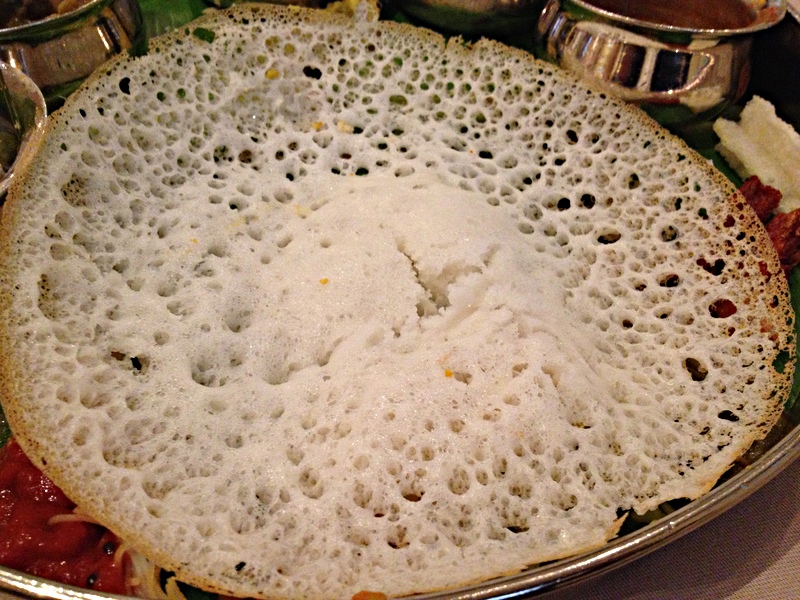 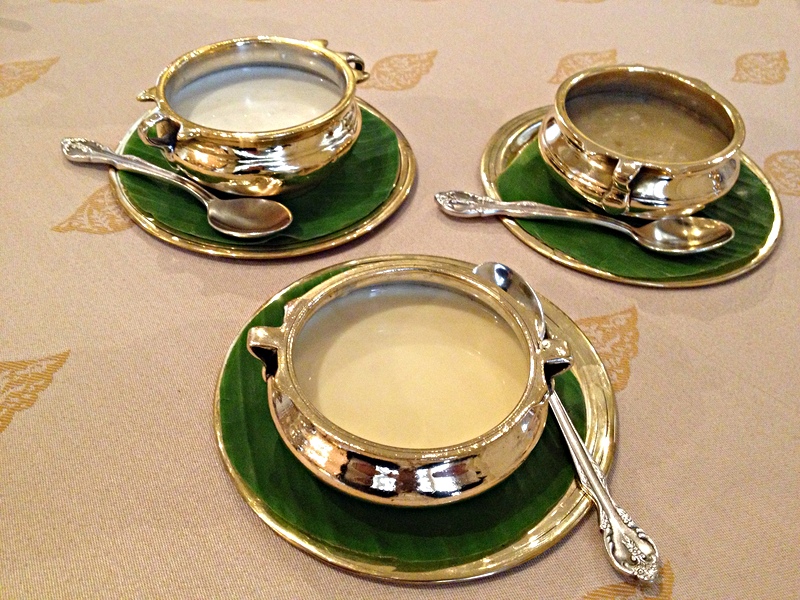 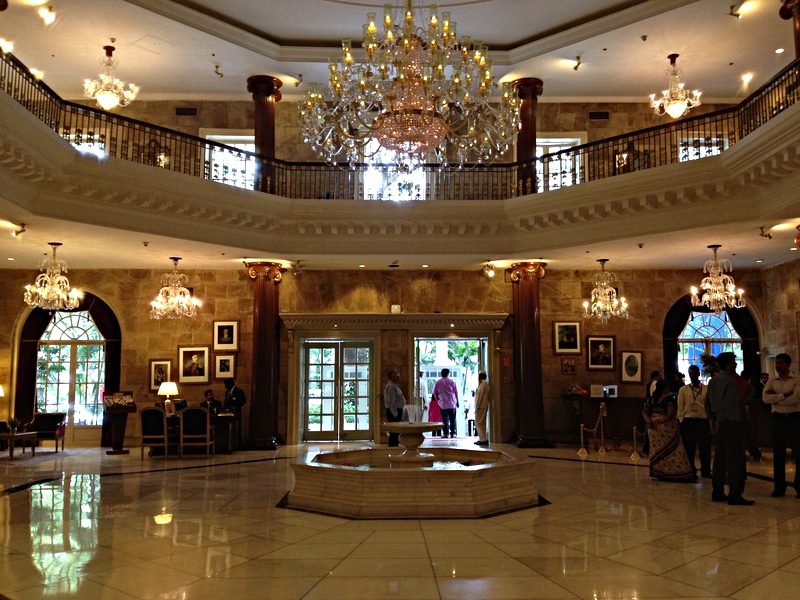