If this restaurant actually deserves the Metro Supreme Restaurant of the Year 2012, then I'm John Key. But even John Key won't be able to deny that this restaurant's got it made - throngs of patrons and ruddy good food minus the frills. Where the really top restaurants in Auckland score over it, is in composing more sophisticated and elaborate food with equal acumen, elegant environs and much more vigilant service .But if gastro-pub verve is what you're going for, Depot suffices.

Fresh shucked oysters are promoted to the top of the menu and we decided to inaugurate our innings with this. The Mahurangi variety were nestling in a briny liquid which you're obliged to consume by default, but the oyster per se was fresh, with no funky notes .The Tuatua was better, offering a clean bass note of savoury ocean. Turbot is called the Rolls Royce of fish, and here it is presented in a natty coupe: the high-quality fish is soft, moist and lightly roasted ,cut with lemon mayo and watercress and sandwiched in well-baked sliders - these offer a perfectly restrained counterpoint to the rambunctious ecstasy of Mumbai's finest Vada Pavs. Lamb Ribs carried a hint of musky note that was quickly overtaken by succulent meat and liberal currents of fat - this marinated meat was coated in a deliciously fried coating of chilli and paprika: the entire package eventually comes clean off the bone. 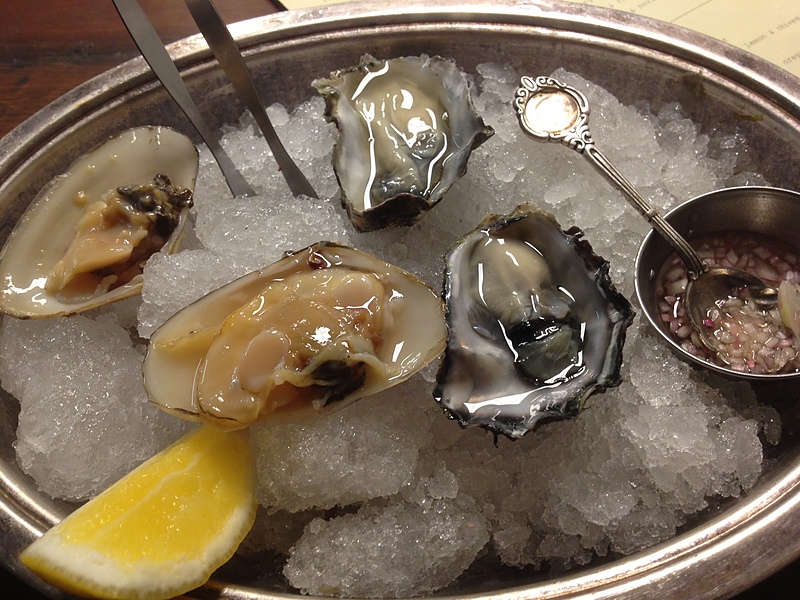 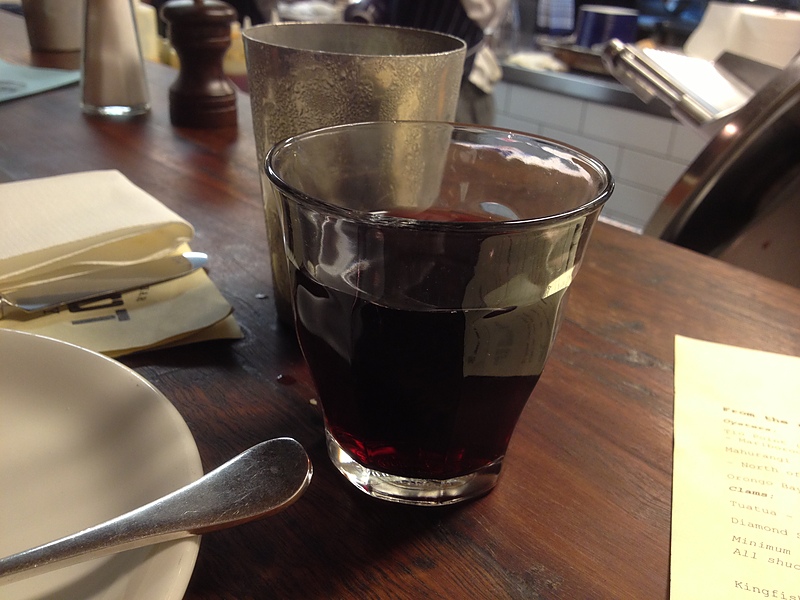 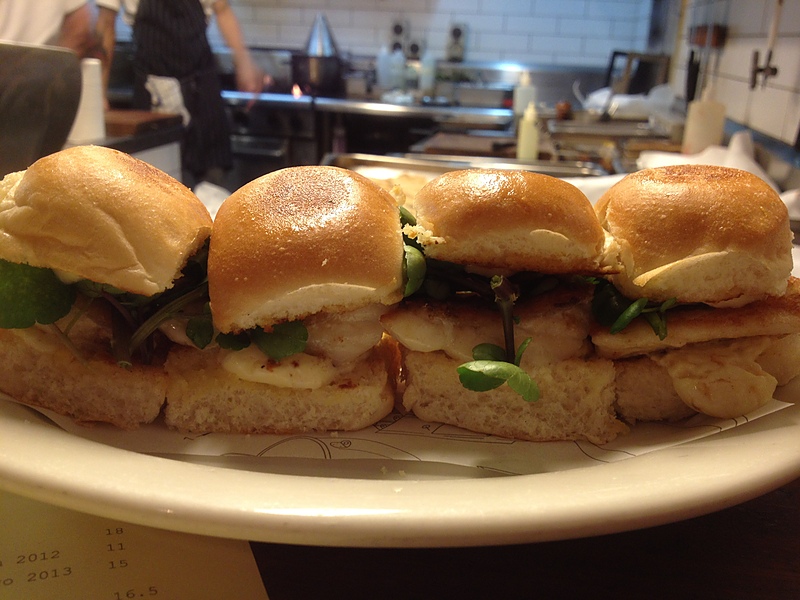 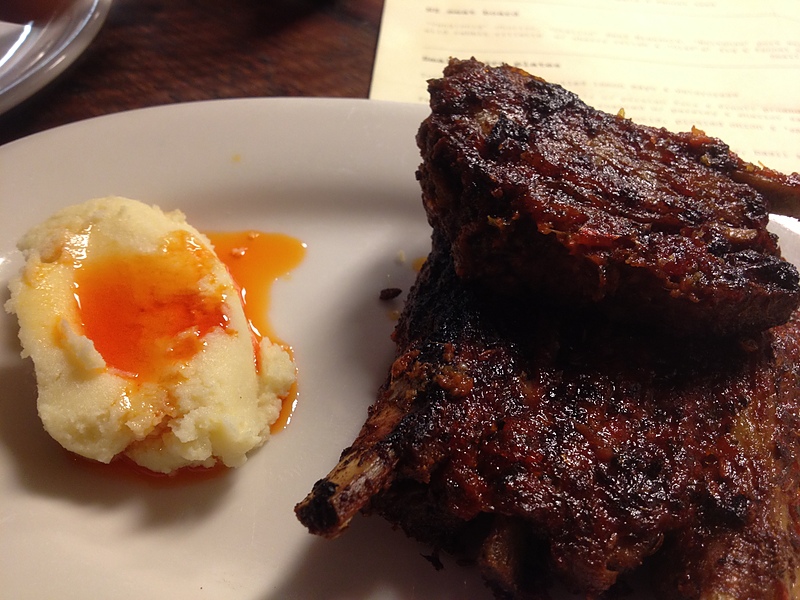 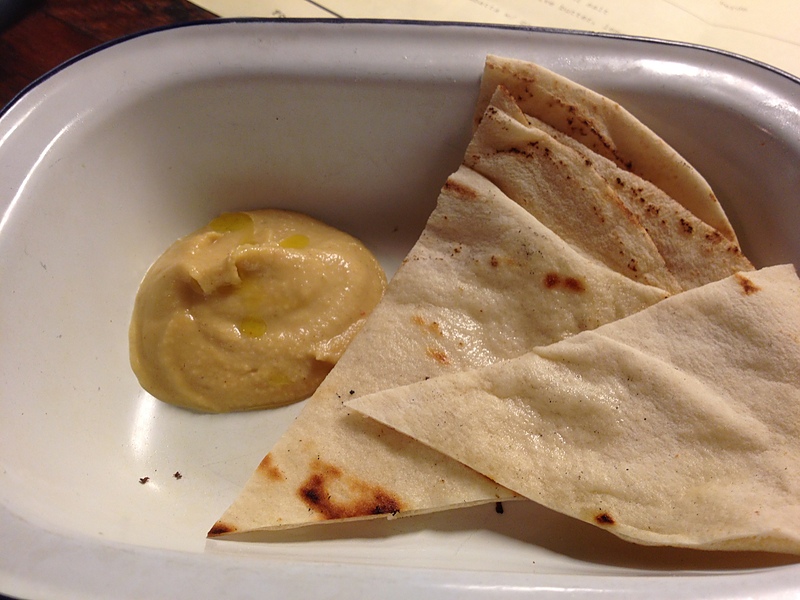 The place is often packed with so many customers especially on weekends that you'd think it is as popular as the SkyTower next to which it is situated. Service simply cannot cope with the high customer numbers but the staff are cheery and charming when they manage to land up in front of you ,and one may console oneself with the healthy number of sweetly beautiful belles that form the service. One of the waitresses breezily said "Welcome back!" to me when I returned a week later to sit in the same kitchen-side spot. Encouraged by the wholesale chutzpah the place peddles, she said "I even know what you ate last time" I was impressed, considering the steady swell of orders that come her way, but out of uncharitable curiosity, I asked her "What did I have?" She paused before hazarding "Skirt Steak". "No" I shook my head gravely (yeah, the "skirt" is always endearing but I had the hapuka that night) and then ruefully added "I'm disappointed" while she, left without devices at that point, chose to wordlessly spin away. 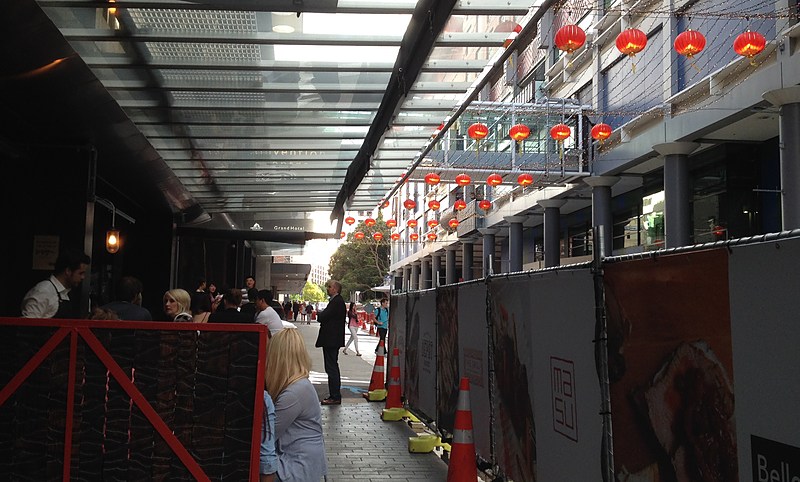 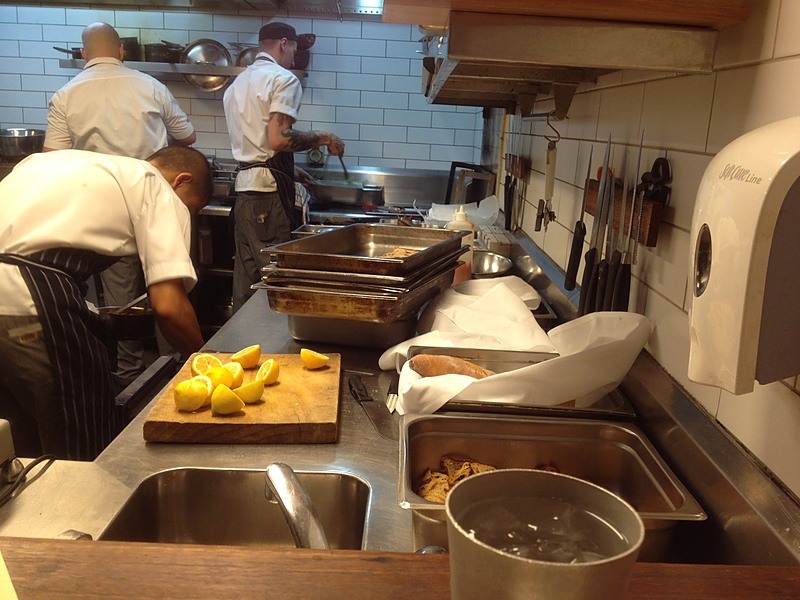 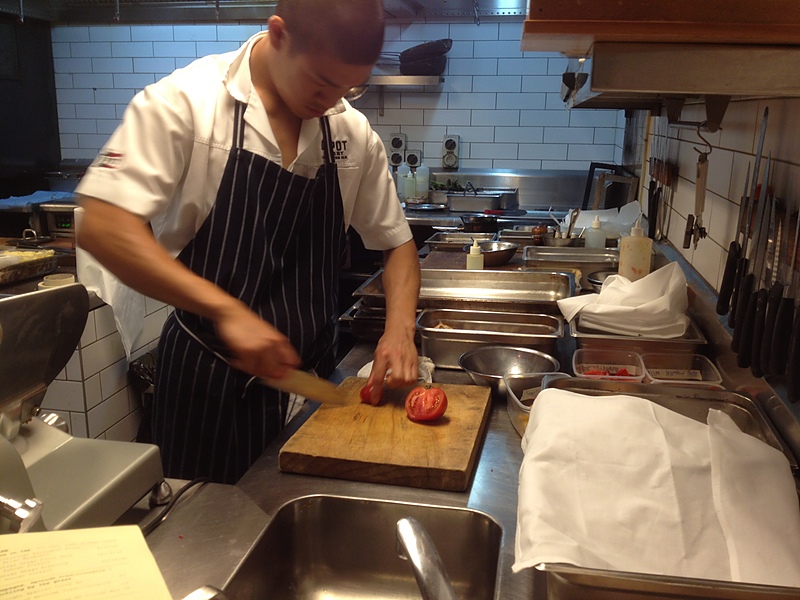 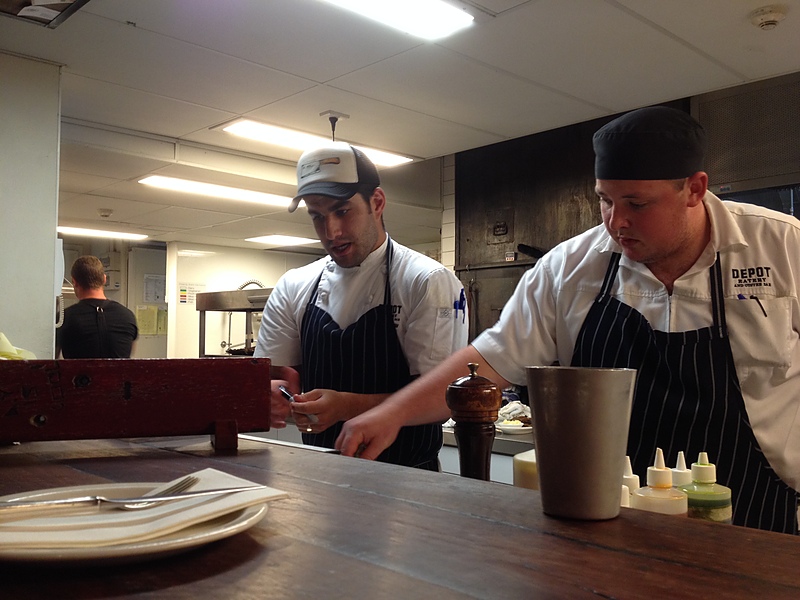 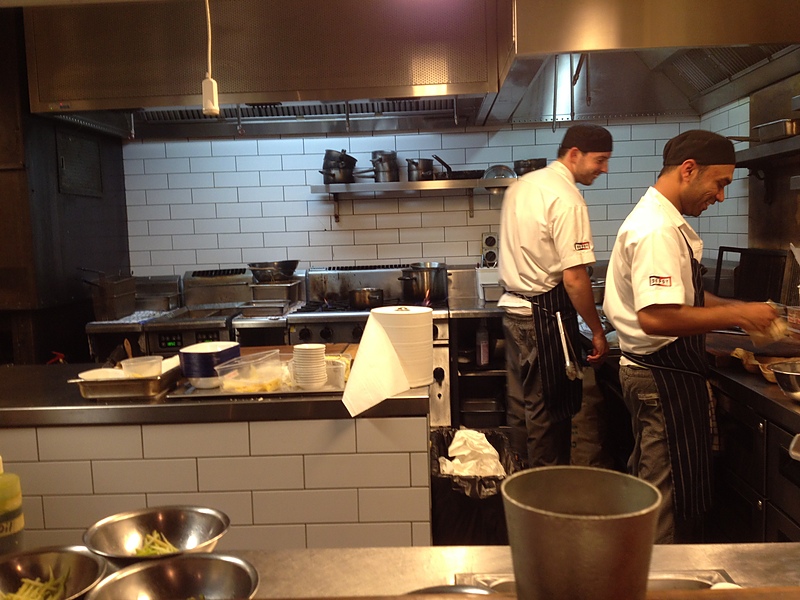 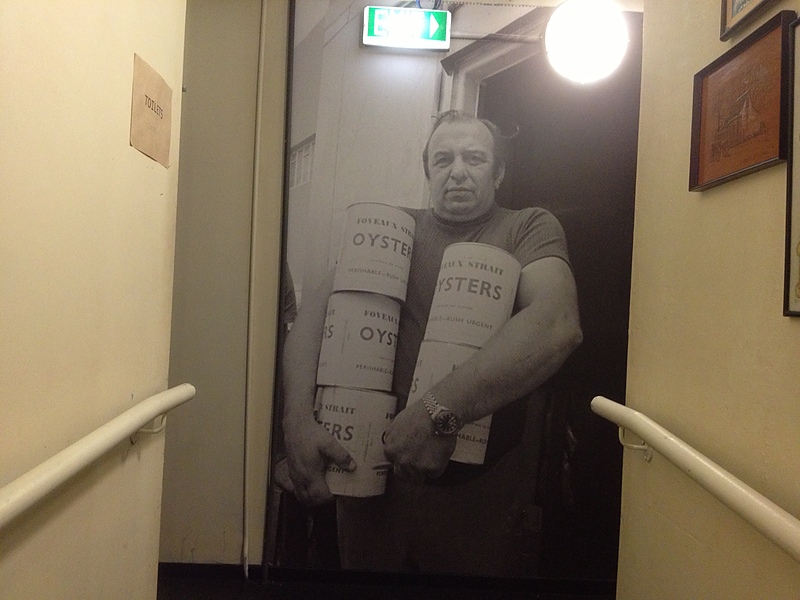 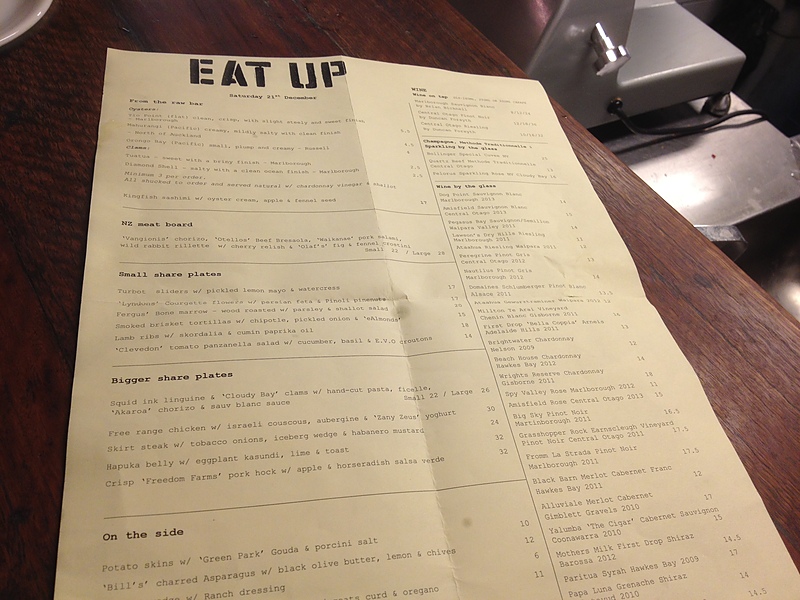 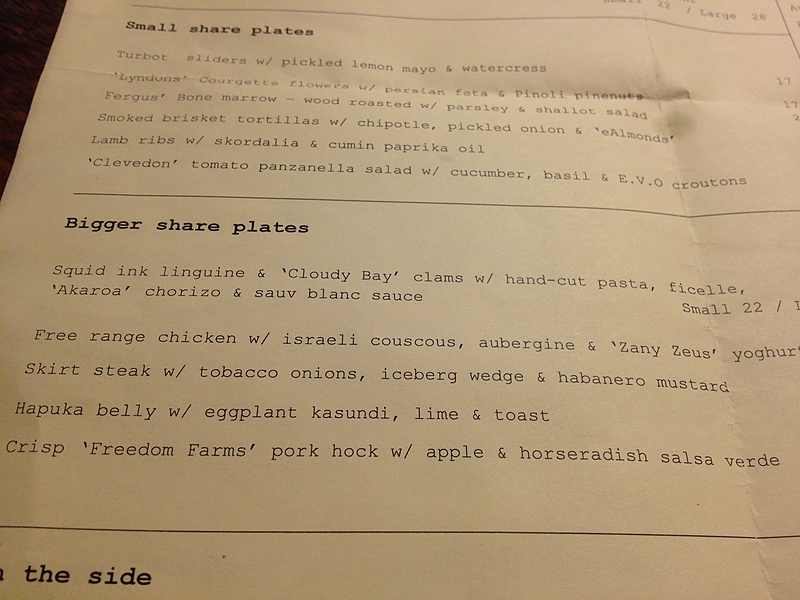 Our tasting of Bone Marrow gave sufficient justification of why it is Anthony Bourdain's wish for his least meal on Earth, and also our server's favourite on the menu: called Fergus' bone marrow here, it's a fatty blast of fabulously full flavour and intense umami - its genius also lay in the accoutrements - thin slices of crisp toast provided a clean,quiet background for the marrow to work its magic, while its heart-attack-inducing richness is cut by parsley, lemon and shallot rings. Clearly the dish evokes respect amongst more than one waiter here - when I made it our first order on a second visit with different companions, the waiter remarked "I like you already!" 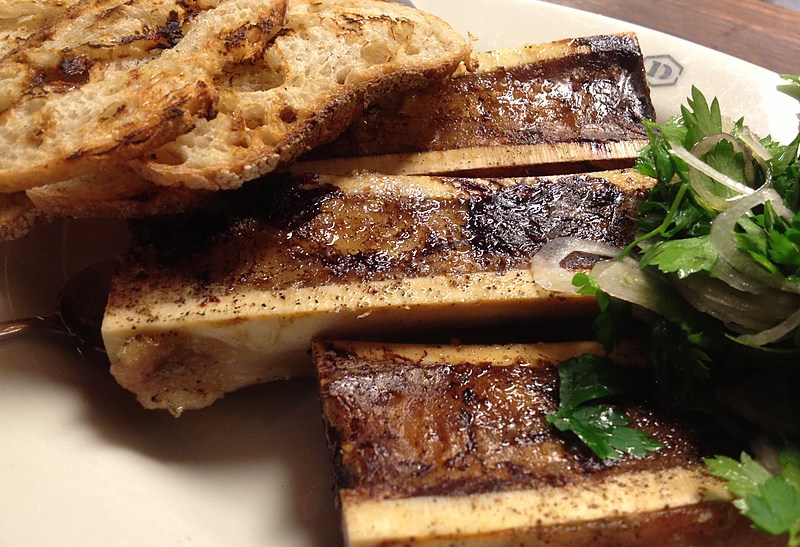 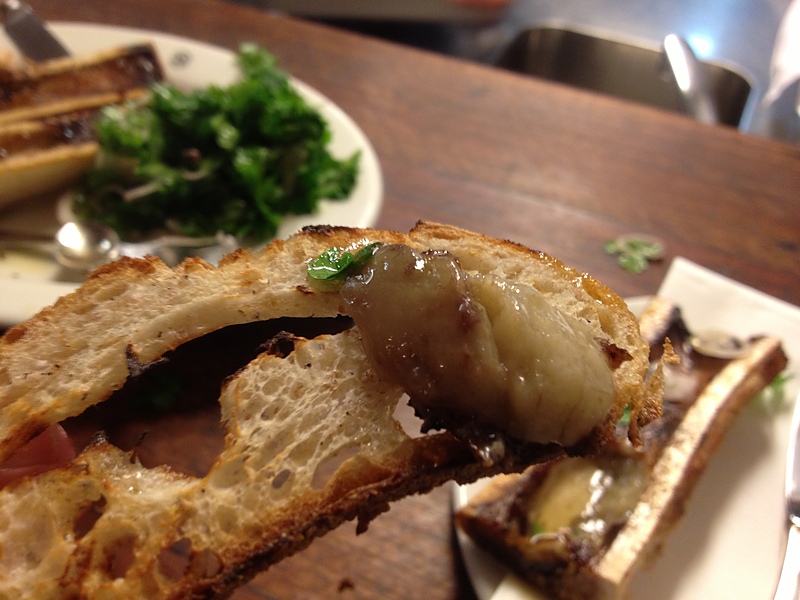 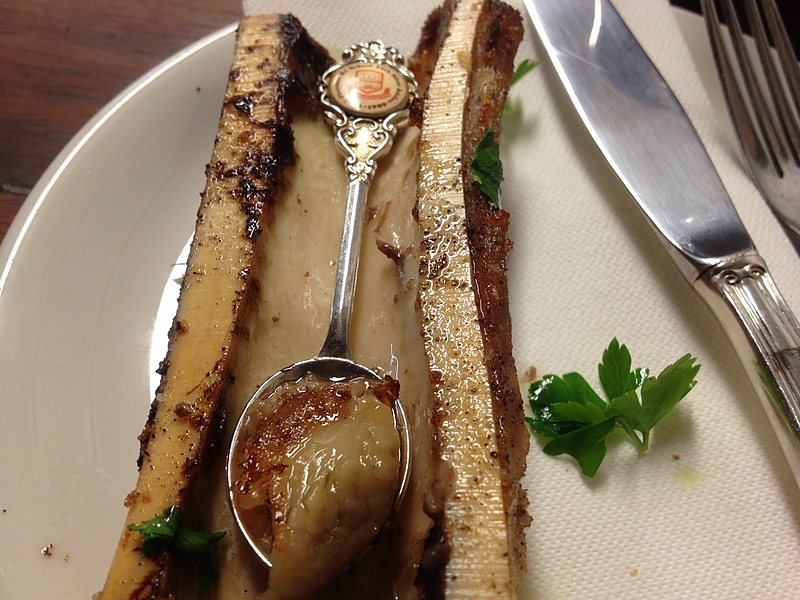 Validation of how deeply Depot has appealed to the Kiwi heart can be found not only in the crowds of patrons there, but also in a particular conversation in my workplace - men and women, of various Caucasian ethnicities, in age ranges from the 30s to the 60s, sang dreamy praises of the restaurant when its name came up. They also admired the reasonable pricing, while the stoked folks who'd never been there were actively plotting on how to speedily arrange a meal. All that hosanna-heaping ended with me uneasily staring at pictures of Pork Hock and wondering whether I would further indulge my shameless exploration of meat by proceeding to consume this tissue which exists at the pig's "ankle". Hunks of that fleshed mortise sit at the mouth of the kitchen's oven. The dish eventually comes up to you in a mound of chopped chunks - crunchy crackling atop fatty cuts of pork. Considering it comes from an area that has given untiring support to so admirable a creature, you don't expect the Hock to be fabulously tender,but the meat has savoury heft on its own and blends comfortingly with unctuous horseradish mash and the crisp brightness of green apple matchsticks. 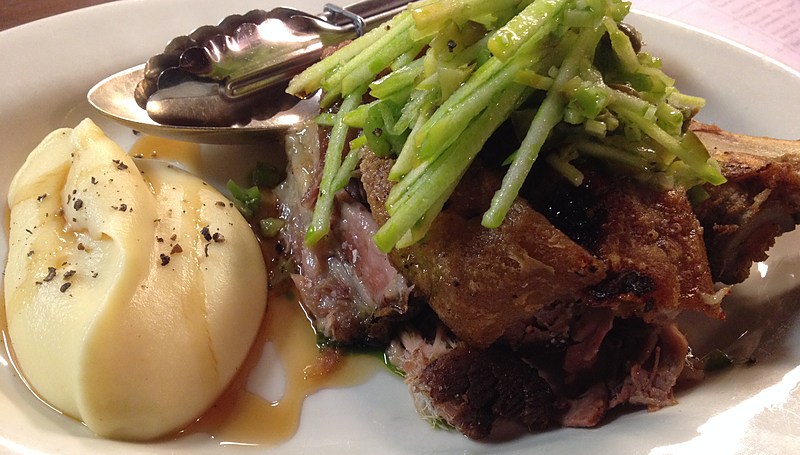 The Hapuka Belly is a succulent expanse of white fish, but it does not merit its $32 price tag- it's paired with the admirably named eggplant kasundi which unfortunately trades savoury finesse for sweetness. Which brings me to my principal cavil - Al Brown tilts too much towards marketplace caution in Depot by shying away from robust seasoning - note that I am talking here about definite savouriness rather than spicy heat. This aspect is most apparent in a newly introduced appetizer- multiple customers have reported and the chefs themselves admit that "Greg's Southern Fried Skate Wings' has too hushed a flavour - bland to be more specific. No doubt it is meltingly soft, and the coating crunchy, but sassy seasoning would have wing-lifted those golden morsels to the stratosphere - to compete with any of the superior Chicken Karaage in the city. 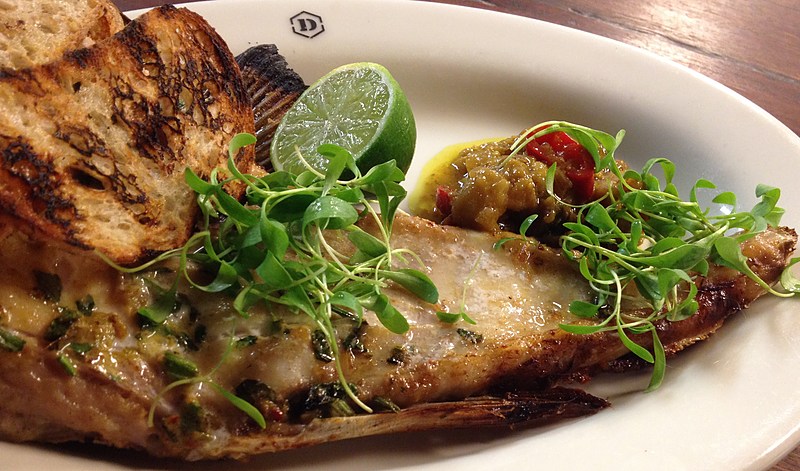 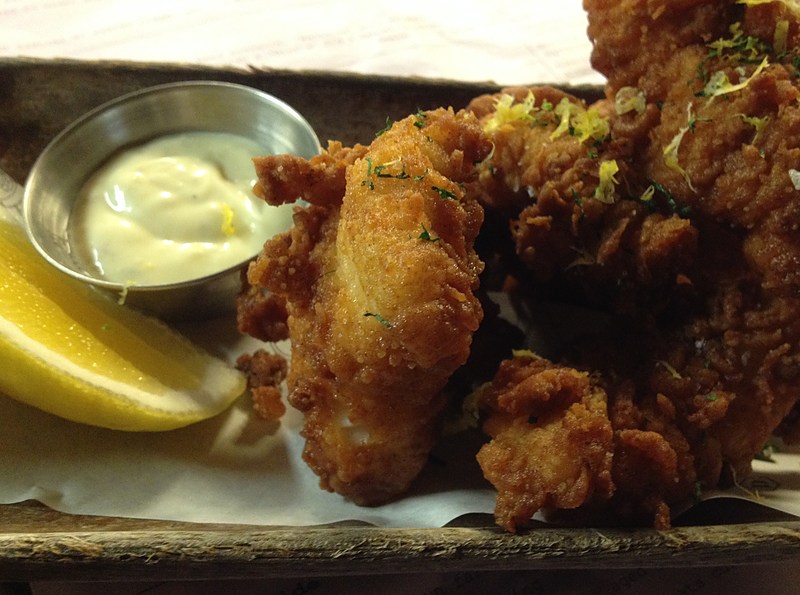 Within the limitations of its cannily constructed Kiwi bistro cuisine, Depot can also score big on the presentation of certain dishes - Free-Range Chicken is given a rather rough but undeniable style - in the way shapely legs of golden chicken are parked over slick breast, bookended by fruit-like slices of roasted eggplant, the whole set-up prettily crowned by quenelles of Zany Zeus yoghurt that's lightly drizzled over with sauce. I'll tell you how it tastes on my future visits but feel free to beat me to it by sampling and then offering feedback in the comments section below.

Occupying seats at the dimly lit front and middle of the restaurant will give the same experience as chilling out in a thousand other hang-outs in the country. But if you sit at the counter bang next to the kitchen (even if it means a wait-time of one hour at peak hours), you can watch all of the plating and a lot of the cooking being done by half a dozen fast-track chefs -its like feeling the pulse of one of the busiest bistros in the country.

Chef  and owner Al Brown who's the nation's most high-profile chef and a TV personality gave me a big surprise when I spotted him, one Friday evening, clearing plates from the tables and taking it inside the kitchen - his corporate drive notwithstanding, he clearly takes the Kiwi DIY ideal to humble heights. 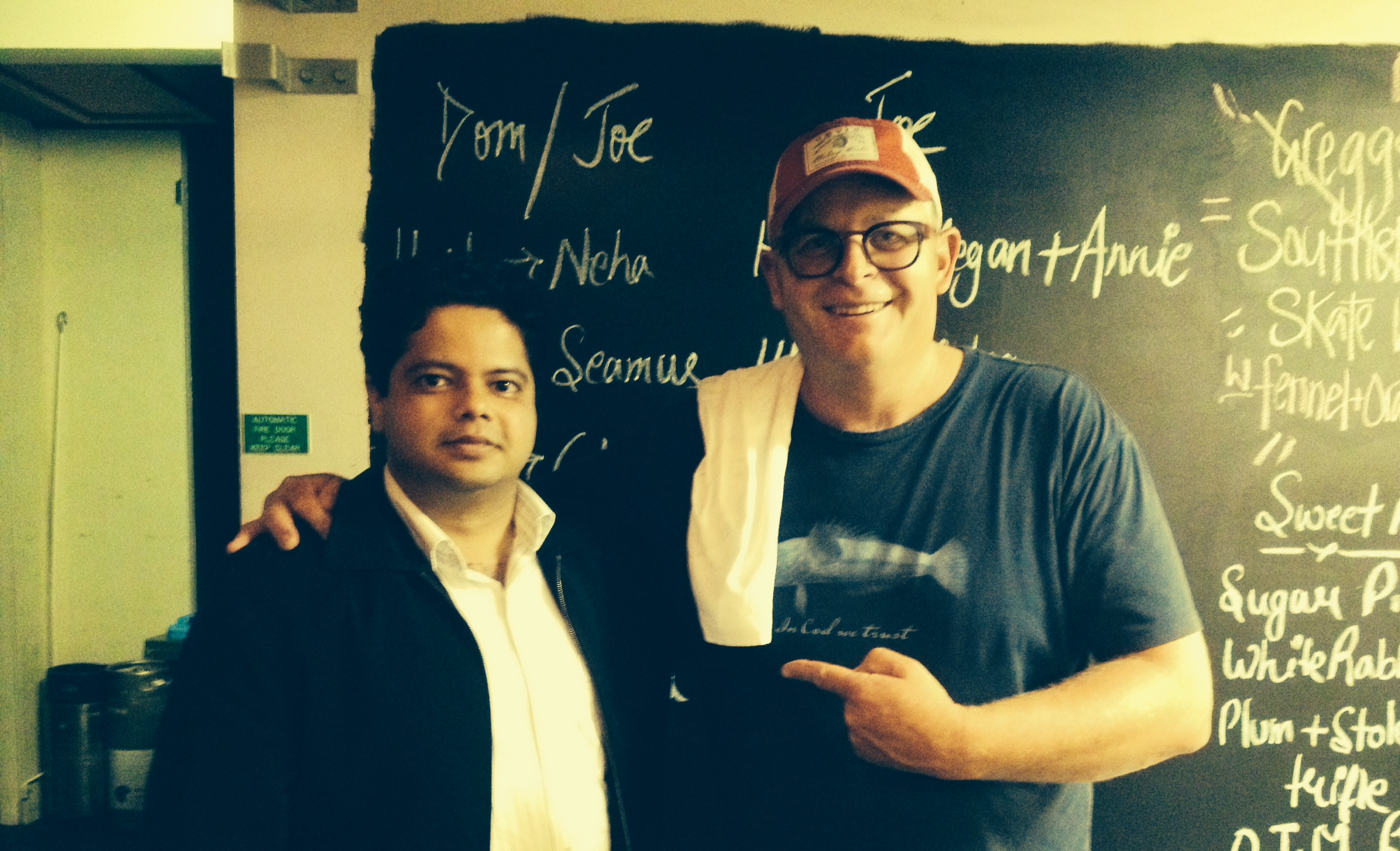