Antoine’s lives in the past in more ways than one. As of July 2014, its website’s front page still proclaims that you are invited to a “glittering evening” on 8th November 2013. The modern Kiwi convenience of the ’eftpos’ card does not have a compatible machine here and you require either cash or a credit/debit card for the 'zig-zig' device the place nurtures. But there are unexpected surprises - on my last visit here I walked past the prime-minister and only later realized that the group nearby is the party centering around him. I was totally distracted from the early part of that meal by the fact that I could see the man twelve feet away sipping champagne and chatting. But by the end of that evening, and over previous visits, I’d tasted enough of the kitchen’s bounty to report that food here is well-suited to high-voltage political parties because, with a few exceptions, it will not distract them from their scheming and plotting.

The food here is old-world French, English and Kiwi cuisine, all amalgamated into a sedate cloud between middle-age and what lies beyond. You will find more moneyed retirees here than yuppies looking for their big night-out. Don’t get me wrong - I admire classicism which is why I bothered to review Antoine’s in the first place, but when you are offering deluxe tradition and charging top dollar for it as this place does, you need to ensure elite quality (this discussion acquires larger scope and stakes when one considers an establishment like L’Ambrosie in Paris). There are no tasting menus here, which means that unless you go in a large group which has made a pact to share all the dishes, you will only end up tasting little of what the kitchen’s admittedly ample and hard-working menu has to offer. My introduction to the restaurant’s pleasures was by way of a Oriental spicy tartare that had an acidic lift alright ,and blending it avec egg yolk made eminent sense but there was nothing exceptional about the flavour -you will find several mashed meat preparations the world over that have more taste and character. 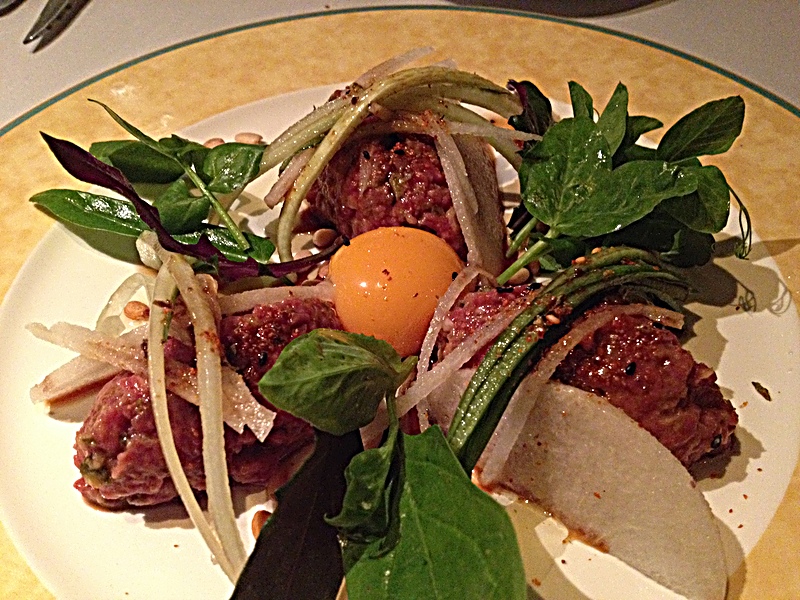 Antoine's has sneaked in some surprise genes - below - German Pretzel Bread - you feel the dough is partially cooked, but it slides down the gullet just fine, especially when anointed with butter. 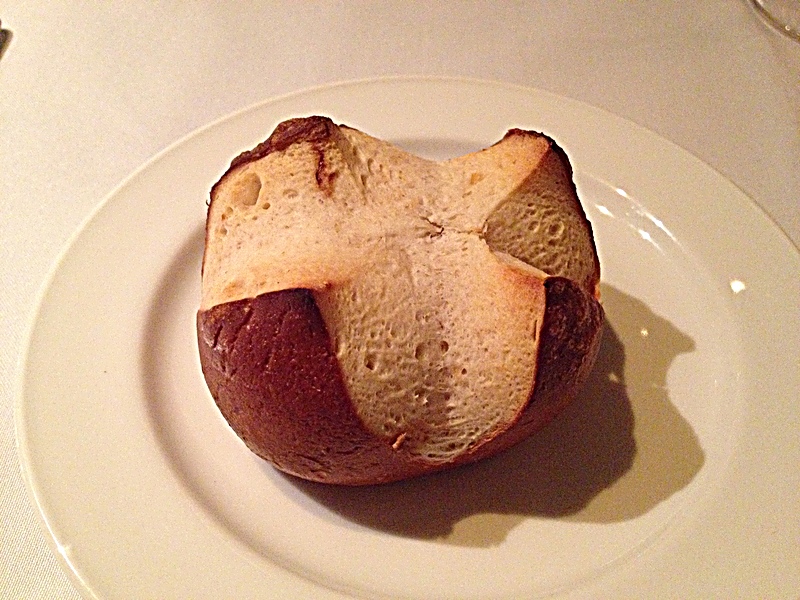 Among all the restaurants in Auckland, this one looks the most classically French - not because of any frills but because of the lack of it and a concentrated yet sparse air of formality. You ring the doorbell and and then are led past a small waiting area to four small but comfortable rooms where tones of white quietly wash over the tables designed for serious dining - the focus often falls squarely on the food. Antoine’s is the longest-lasting fine-dining restaurant in Auckland, having completed to its considerable credit, more than forty years in this difficult business. 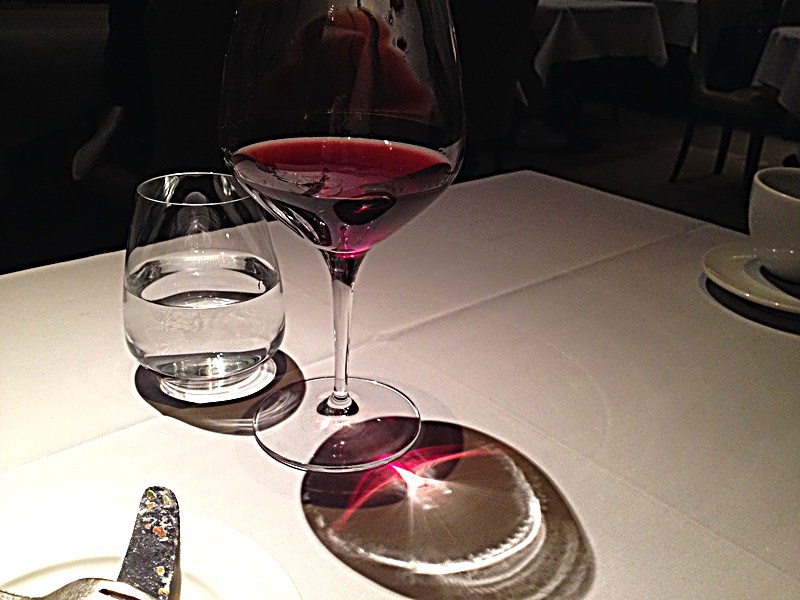 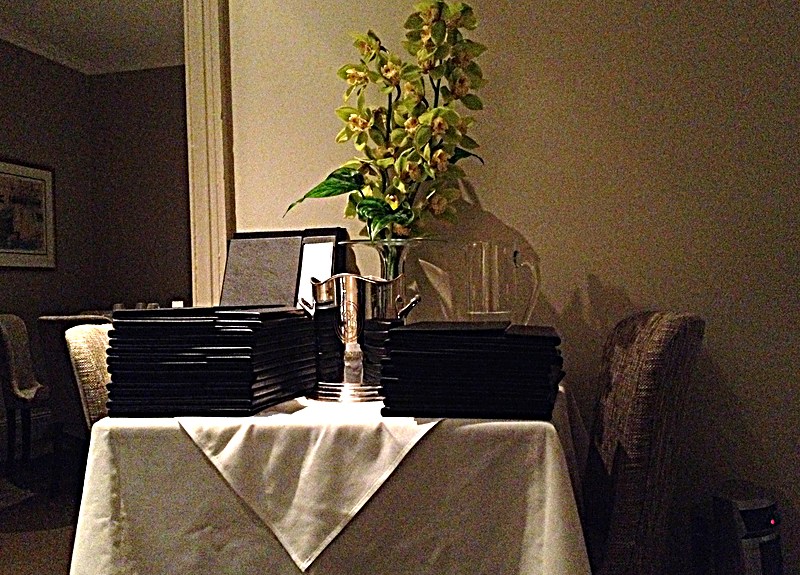 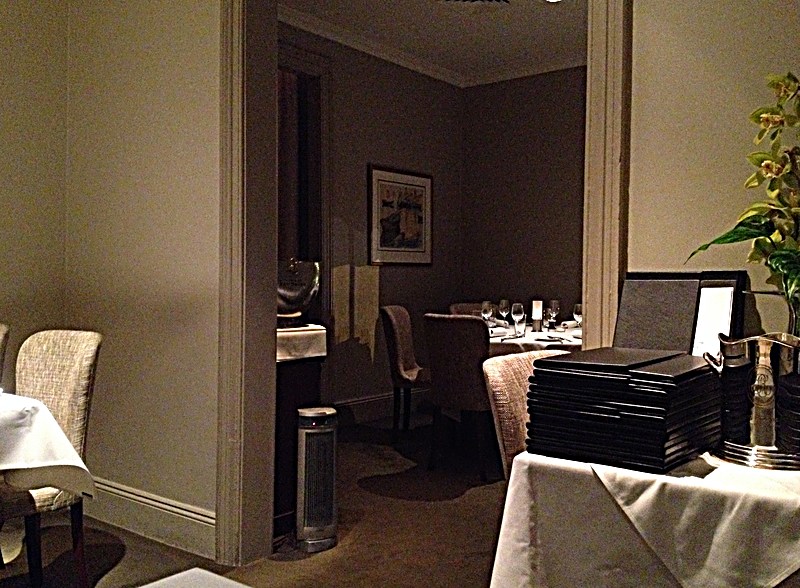 I didn’t have the guts to dine on an appetizer that boasted black pudding, snails and lamb’s brains (though it was rather timid of them to leave out bull’s testicles on that plate) but I did have the stomach to eat the absolute tripe they dished out. This bovine sac is bathed with cream and sherry and arrives in a sauce of spring onion and peppercorns. In a blind tasting I’d have said that this is recondite seafood served in a creamy Chinese sauce. Le Tripe was soft, wispily meaty, slightly spongy, a tiny bit thready and just a shade gelatinous - in short, quite palatable. But the unctuous sauce was just not delicious, and the “portion” size which I can only call massive - flummoxed me. The “silver service” had gone on ladling it onto my plate and I had to tell the server to hold off from serving the remaining one-fifths - he entirely empathized. Even so, it became a chore to consume it and half of my serving remained uneaten when I waved the white flag.

There’s an Indian story about how a man of great appetite was challenged to a gargantuan meal. The public watched with awe as the man ate mountainous quantities. When he was finished with the savoury courses, he seemed full to the gullet and unable to eat anymore. But when the uncertain servers arrived with Payasam (sweet rice pudding), he attacked it with renewed vigor and downed at least a cauldron of it. When he was asked how he managed this, he said “In a jam-packed street, when the king arrives , the crowd will somehow make way for him. Similarly when the prime sweet appears, my stomach does the same”. I will not cite similar ecstasy from the ensuing main course but my tripe-full tummy seemed to be in a very receptive mood when a dish of more fetching taste arrived. Snapper coated in egg was served in two generous fillets parked over a limited bed of furikake pasta. It had little inspiration but it was eminently edible and and I polished it off, never mind that the citrus-avocado vinaigrette was a phantom and that you had to make your own “sauce” by squeezing grapefruit over the fish. 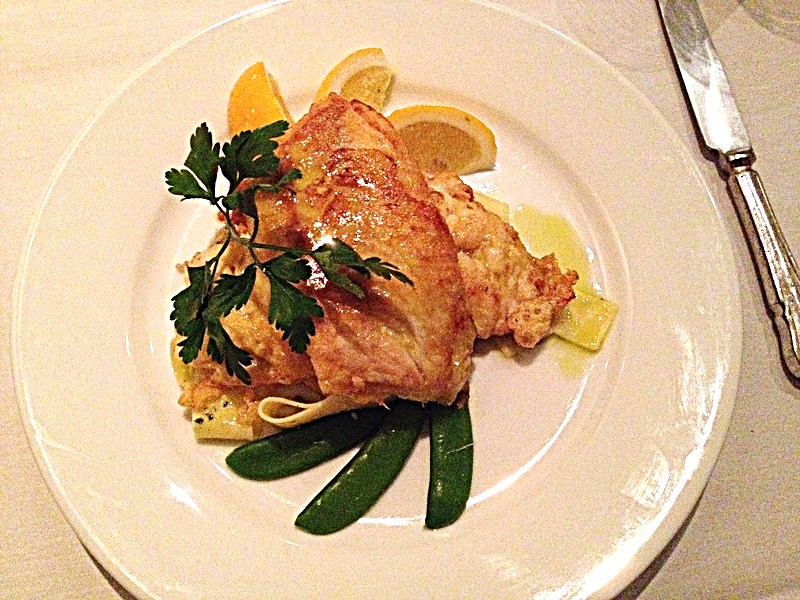 The vegetables served alongside all the mains feature the softest (but not mushy) steamed broccoli you can find in Auckland’s restaurants, while the green beans included in two of the main courses were superb tender-crisp examples.

The duck a la orange, while not sprouting wings to soar over the rest of Auckland’s poultry, is nevertheless an indulgent delight, and the ceremony of its table-side plating from the serving platter is a neat manouever to behold. The meat is soft, moist and rich and when anointed with that coolly calibrated Grand Marnier sauce, you could polish off the whole of it in a series of pleasurable mouthfuls before languidly realizing that the modest kitchens of the 1960s had been smart enough to engineer a wonderful fusion of main course and dessert. When I transferred some portions of this dish to my pal who was grazing on his fillet steak, he consumed it without comment and later informed me that his ho-hum dish had been momentarily perked up by those transplanted rinds of orange. 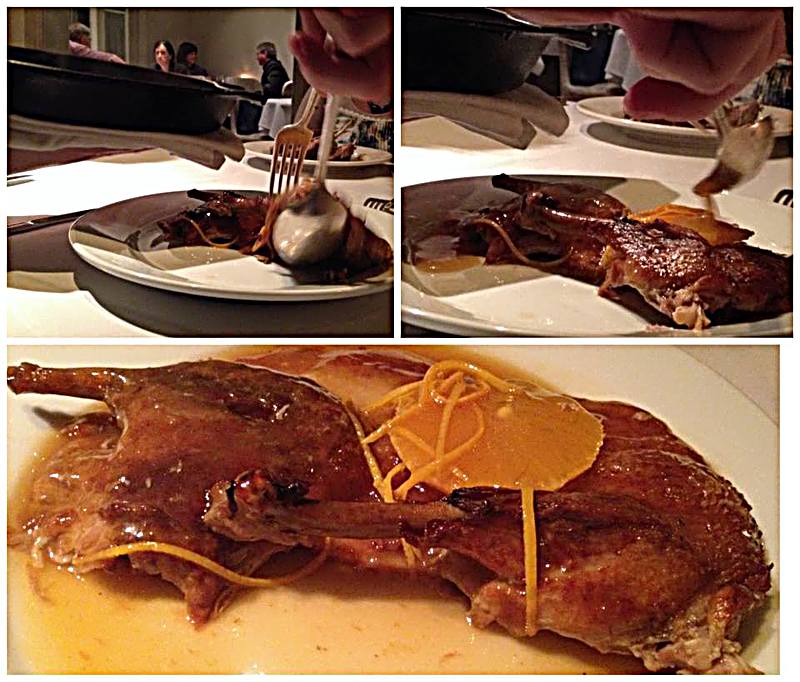 I will only be able to pass fleeting comments on the two mains featured in the photographs below, because my companions were having them as main courses and I was stuck in the embarrassing limbo wherein one doesn’t have the courage to ask significant portions of them for tasting and yet ends up sneaking bites in the interests of telling you, dear reader, how they tasted. My pal, the steak connoisseur, reported that the meat lacked inherent magic. I was satisfied but not blown away by a couple of bites - and the béarnaise sauce gave a fermented twang to the cream in a way that didn’t strum on our taste-strings. My sweet friend across the table rated the lamb 6/10 - the chunks I finagled didn’t contradict her judgment, and the red wine reduction didn’t rock one’s sauceboat either but the tangy moist chimes of a mint’-n’-currant couscous were a smart addition. 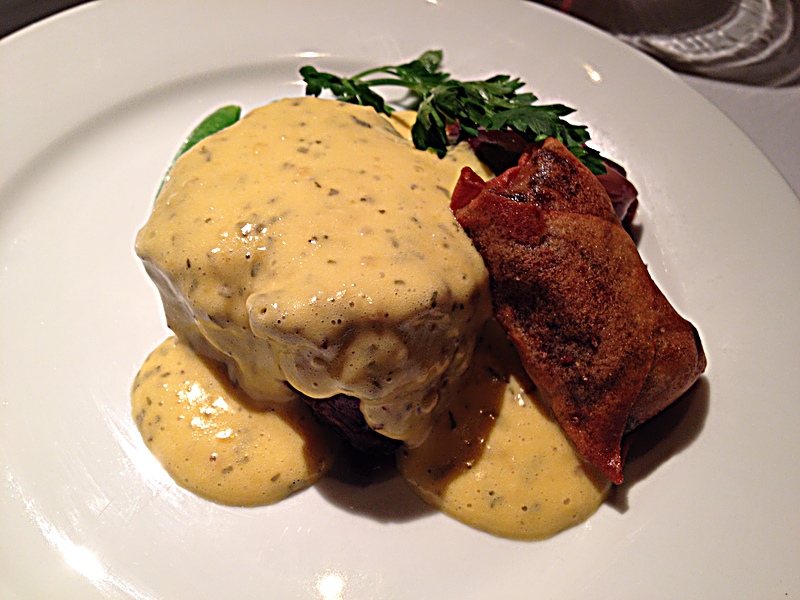 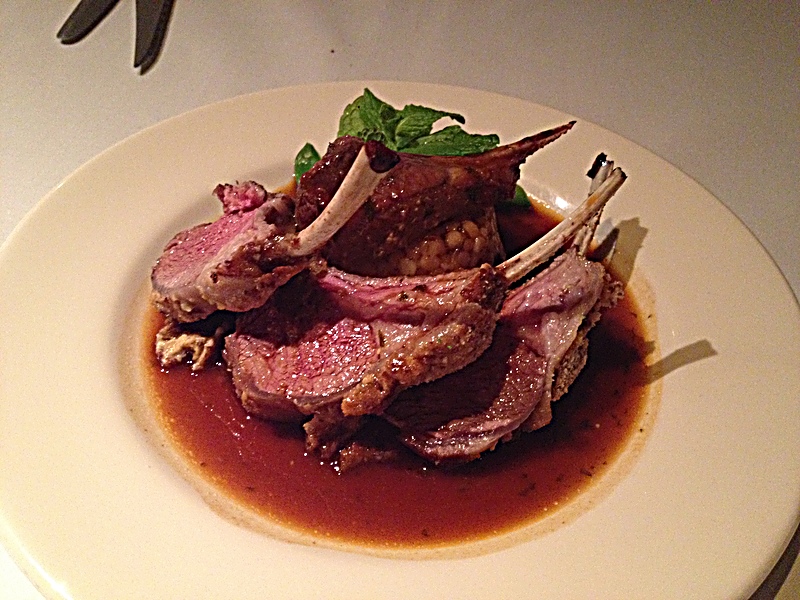 What I gheraoed for my exclusive consumption on a later visit were the pork, and another dish of Cannelloni. The appetizing and eventful geometry of the first dish raises expectations when it is placed before you but then you taste the sous-vide pork, you wonder why it misses that satiny softness that the said technique engineers, and also rue that the red sauce and the risotto grains do an uninteresting reprise of their versions in the lamb dish. One component on that plate was symbolic of the pusillanimity in savory thrust that Antoine’s reveals: taro dumplings had an unctuous core and therefore needed at least a mildly spiced contrapuntal coat but it was sadly saddled with an again sweet toasted-sesame crust. But the Cannelloni gave an European definition of savouriness in an internationally irrefutable way. Its hearty flavour was staked on the archetypal pairing of tomato and mozarella which worked with quiet resonance here. The former’s fondue had a rounded depth of flavour that “cream of tomato’ soup-packets struggle to achieve, while aubergines in the little blankets of pasta gave another undertow of warm taste. 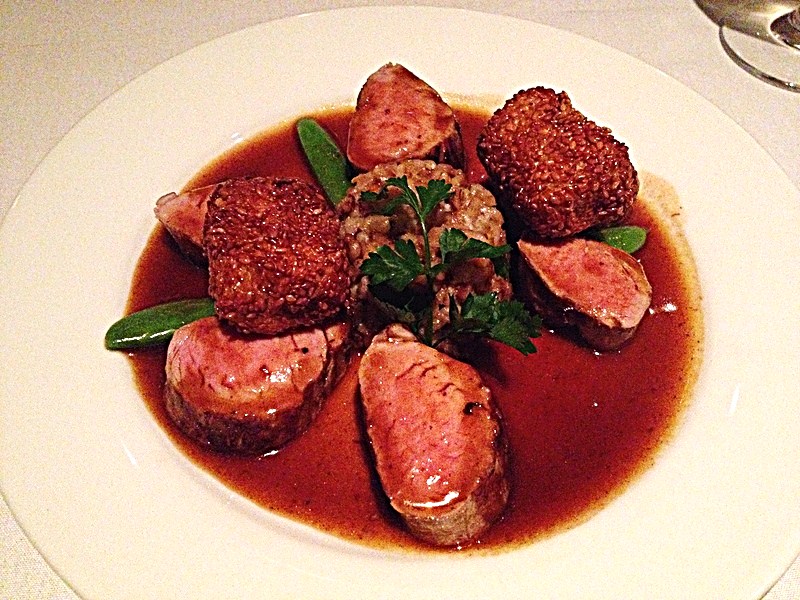 The 15% GST they charge on top of the menu-listed cost here (which makes it costlier than all other fine-dining restaurants in Auckland) should translate into memorable service but the young men who run the service here have limited sociability. They did not bother to acknowledge my repeat visits and showed no exemplary level of attentiveness or personality. It was not Asperger’s behaviour, but neither was it very far away from it.

The waiting room at the entrance. 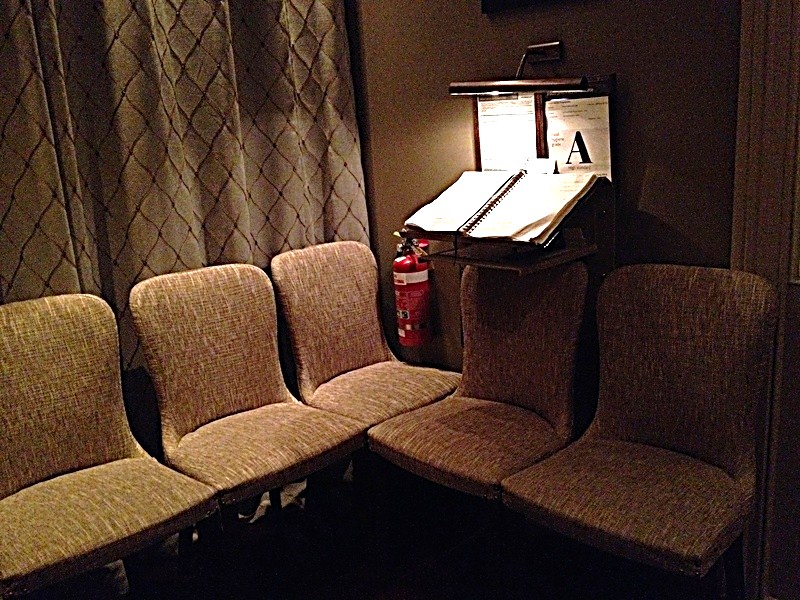 Chocolate souffle avec rosewater et cassis had wonderful looks but performed a little less beautifully. Like the savouries, this one too eschewed any go-for-broke effect - but it worked with harmony when the cloud of mild chocolate was blended with cream and scooped up with the lovely perfume of that scarlet medallion. Whiskey Panacotta was a boozy intense beauty, a mildly inebriated fully turned-on Monica Bellucci. The Panacotta had luscious creaminess and it was topped with a cool whiskey blend led by Chivas Regal - the alcoholic potency of this amber liquid was married to caramel notes so perfectly that you couldn’t quite tell where the alcohol ended and the sweetness began. This reduction went on to hit ethereal notes when it seeped near the welcome addition of cherries and acquired a touch of fruity zip. The whole composition would have been a complete masterpiece had the flavour of the macerated prunes been coaxed to be more complex and less sweet. 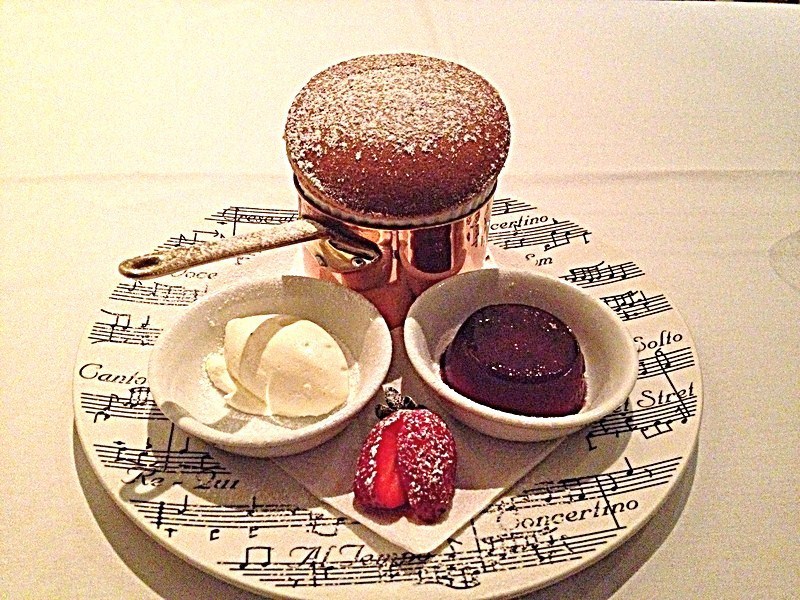 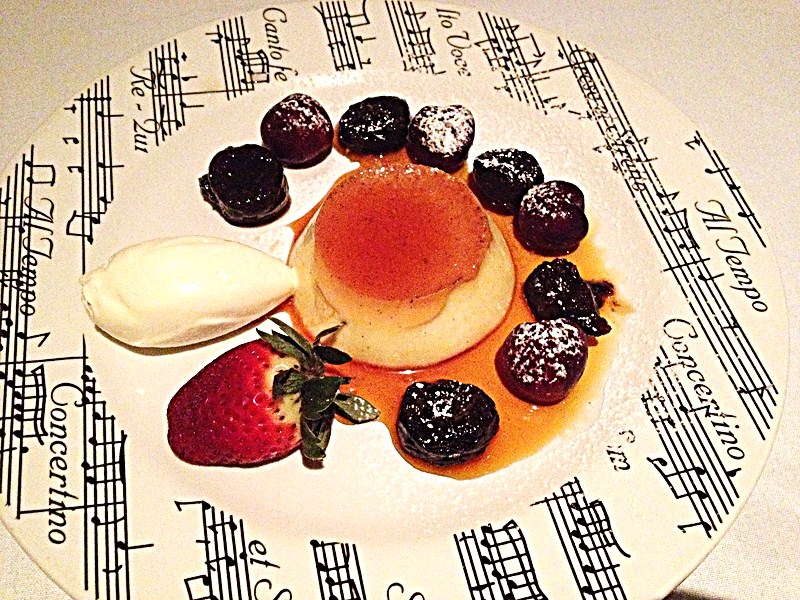 At the prices Antoine’s charges ($30 starters, $45 mains, $25 dessert + 15% GST - which often works out to $140 per person for a three course menu including a glass of wine), and considering this is a subtle but definite transgression of New Zealand’s controlled tariffs, nevermind the bonus of Prime-ministerial proximity, the restaurant has no option but to be excellent. But it puts its best foot way too forward all the way into the dessert category and forgets to ensure that you come back for the savory courses. The service, the ceremony of table-side plating notwithstanding ,is not a patch on the vaulting vigilance and considerable charm of world-class service teams and the ambience here is what that of Le Louis XV would be if it were stripped of all its magnificence and shrunk to one-fourth of its size. The generation which helped Antoine’s to where it is now, will continue to support it with a blend of nostalgia and not knowing better, but the current set realizes where to get tastier bang for their buck.