This review is best enjoyed, for formatting purposes, on a desktop or laptop, not a smartphone.
HARBOUR SOCIETY : Restaurant Review
Rating : 3.25 stars out of 5   ( a quarter of the way between Good and Excellent)
Chef : Marc De Passorio
Auckland, New Zealand
Visited Dec. 2018, Jan 2019
The entry of a fine-dining contender is always welcome  in the mercurial culinary playgrounds of Auckland. This one has more going for it, ensconced in the upper floors of the contemporary-chic SO Sofitel where 5 star rooms of luxurious, striking decor start at NZD 550 per night. There were enticing promotional photographs of cuisine which mirorred the hotel's ambition and they even plucked a chef of interesting credentials - Marc de Passorio, who, in addition to his haute-cuisine credentials in Aix-en-Provence in France, had spent some time cooking for Vladimir Putin (the finest thug in Europe). Luxury, ignominy, redemption - the mix was irresistible and the enticement quite ripe for a visit early in the life of this 'elevated' dining domain. 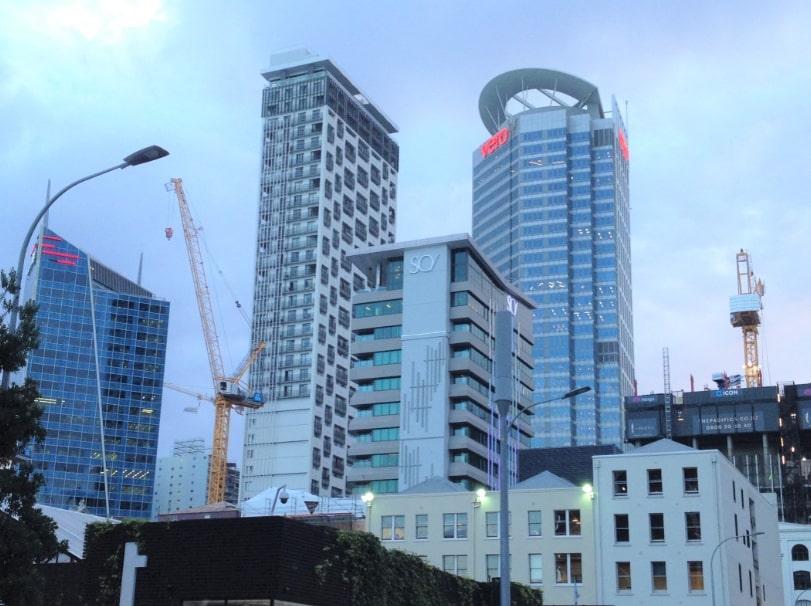 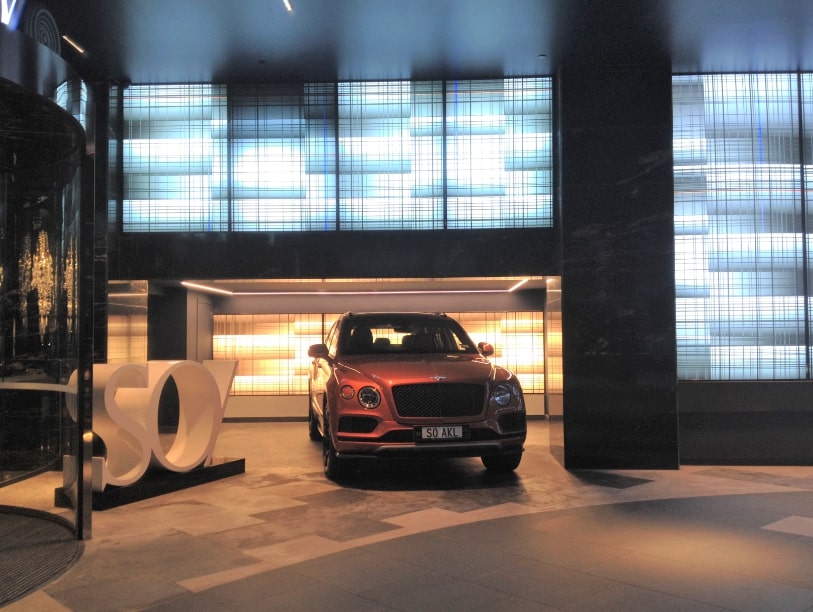 For restaurants inside five star hotels , the service starts at the hotel entrance. With or without staff being present there, most NZ joints in this category do not realize this. There's no doorman at SO Sofitel's entrance , a striking indicator of staff-pinching. Arriving cars therefore get the cold shoulder , but the main doors are automatic thus cutting the need for staff to open them. At the forecourt though, other things catch your eye - there's that magnificent beast - a black Bentley Flying Spur on display , and then to the side, surrounded by illuminated modernistic screens a sporty Bentley SUV. Buoyed by these millionaire indulgences, one enters SO S.
The concierges are on it, keenly guiding you to where you want to go, often walking one to the lift - a sleek contraption with only button on the outside where one keys in the desired destination floor and then enters inside. The lobby is darkly glamourous, cloaked bone to hem in black stone with strategic placements of glittering decor. 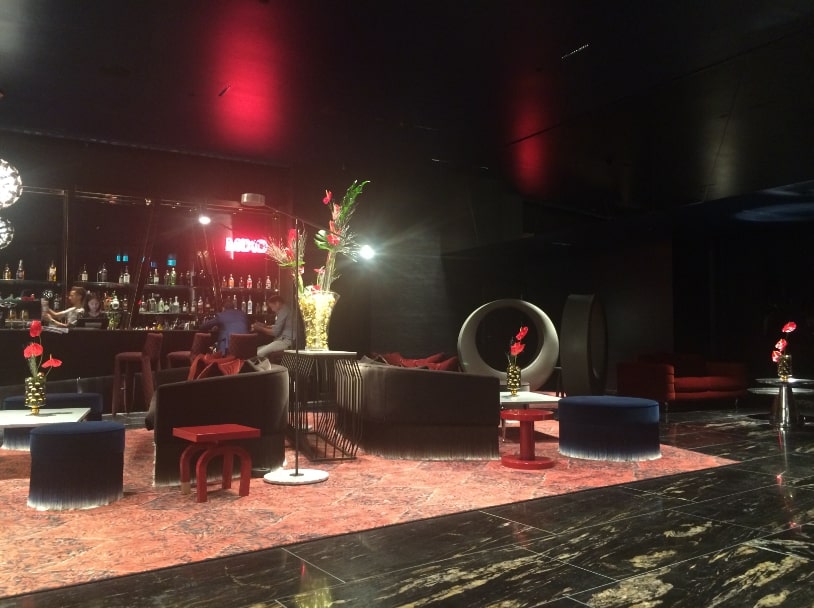 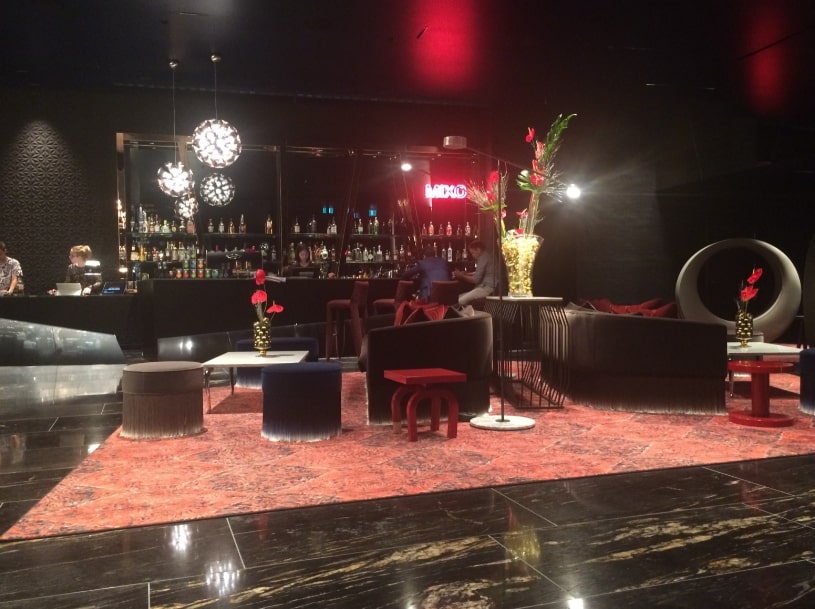 The restaurant is a stylish luxurious place with only one significant deduction in classiness - the tables are stripped of tablecoth. It is an expansive room, with a boldly open-plan, glamorously flowing bright kitchen at the back. 70 mm views of the Auckland harbour and downtown are gifted by large windows that both enclose and liberate. A smooth stone floor at the entrance gives way to a herringbone wood floor, a gently arched beige ceiling and some big circular gold-coated pillars the seams of which are not quite flush. Chairs though small are comfortably fabric-upholstered with sleek burnished-wood countours along the lines of the Eames chair. 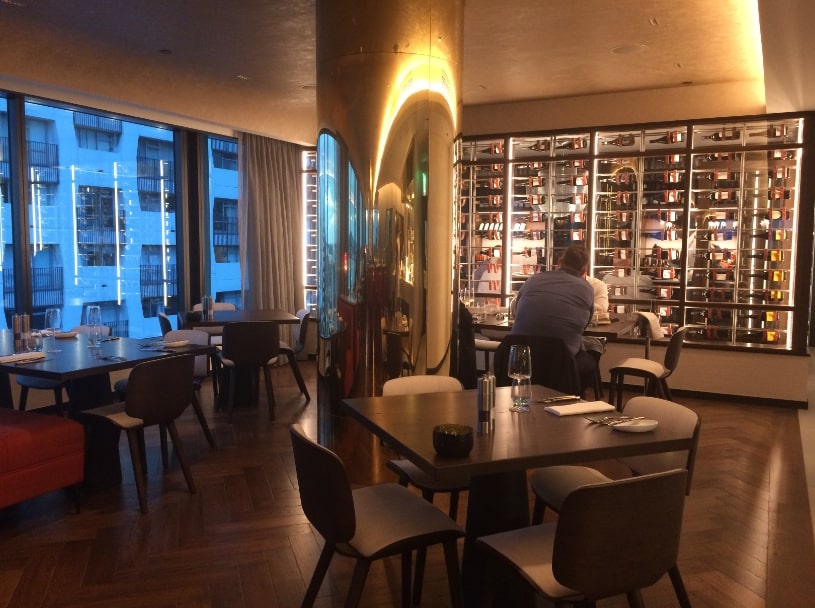 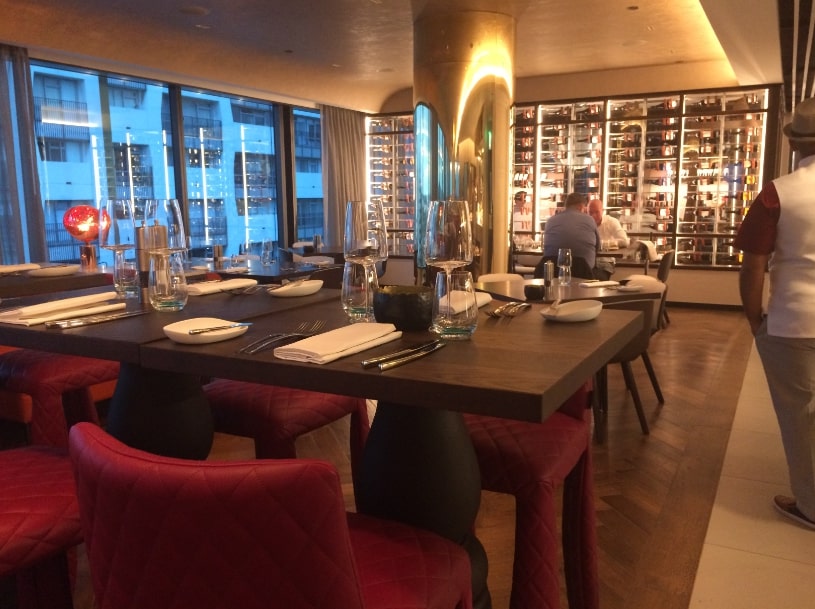 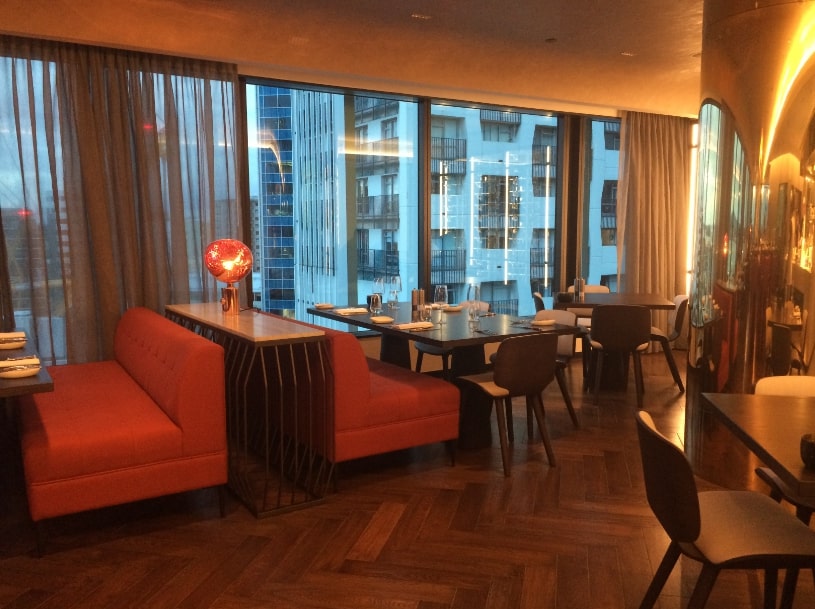 Service over the composite course of two separate evenings proved to be excellent, but started off hamstrung and clod-like. There was a young gentleman who was not trained adequately for five star service and whose unfinessed gestures were eventually offset only by his departure. We selected a table which had great views of the harbour - I certainly enjoyed this, but my companion's view was blocked by curtains, and we asked the afore-cited waiter for help. He said the curtains couldn't be moved and that the situation couldn't be helped. He later came around and said "Ok, we've done this before..", and bunched together the curtain, twisting it into a braid. Unfortunately, he was not an accomplished braid-tier, and when he took his hands off the braided but untied curtain, it obviously unfurled and spread out as before, drily apparent to us but for him a crestfallen lesson in the laws of curtain physics. Flustered and defeated, he retreated. Our food was all served nice and hot but had we complained of cold food, I wonder whether he'd try to fix the situation with a lighter from his pocket. Mercifully, he was replaced by a Filipino-Japanese young lady who was far more sensible, and much more fetching in her demeanour, smiles and service. 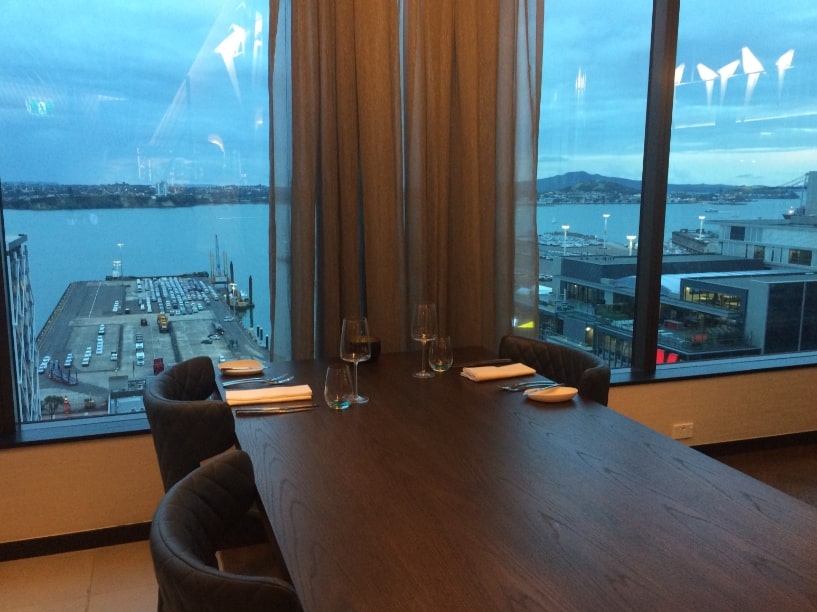 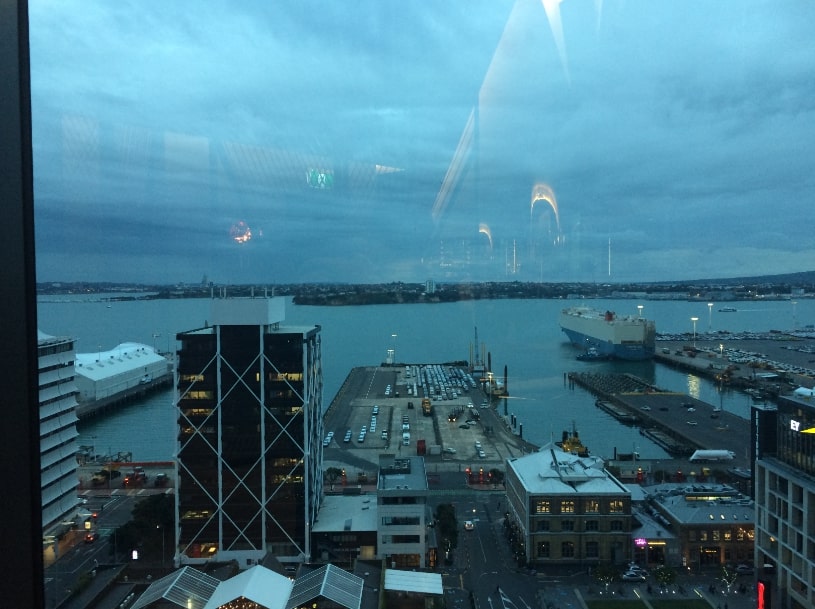 Harbour Society in its current state is essentially a meat-'n'-veg restaurant - there are no carb-based dishes , which would make the calorie-watchers very happy but which constrict the menu options. Vegetarians will struggle with the lean pickings on offer. On the whole the menu seems elegant but it's actually quite lop-sided and skews inordinately towards red meat. My abjurance of the latter explains why a large chunk of the offerings are not explicated here.
Lobster was glamorously presented, with a glass dome lifted off the table to disclose clouds of smoke that cleared to reveal a small dainty presentation. This is likely the most tender lobster in Auckland, the smoked treatment permeating its succulent delicate meat - no haunting soul of the sea here in terms of deep intrinsic flavour but the texture made up, and so did the excellently judged accoutrements of a lemon-chantilly cream and a few pearls of caviar. 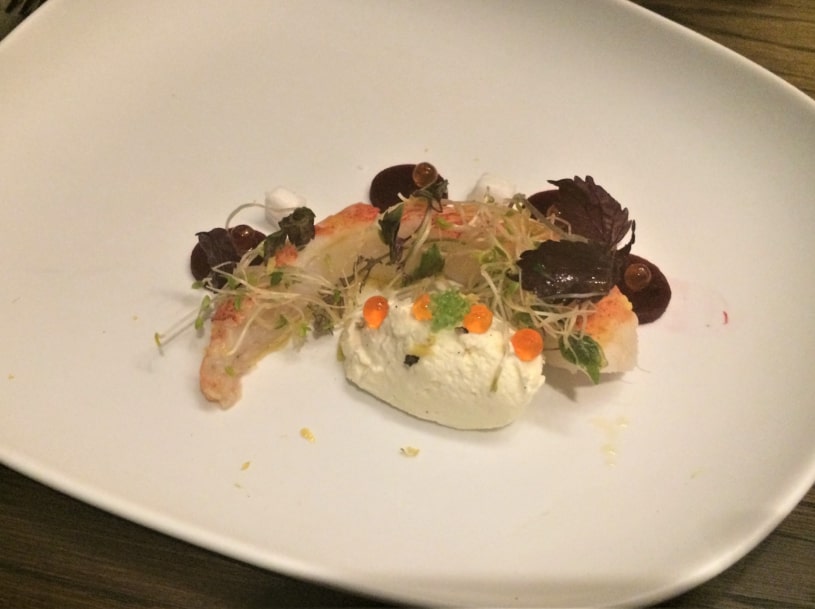 On the cocktail menu,  J.A.F.F.E martini had the following menu description - "just another f***ing martini" - complete with the asterixes. One has to admire their guts !  It was a blend of coffee, cacao and orange - intrigued, I ordered it but found, alas, that the coffee was too dominant. The waitress was admirably assiduous in eliciting my lack of appreciation of the drink after I responded to her feedback query with a guarded answer (she cared, or at least she seemed to care but a truly service-oriented bar would have followed that up with a second complimentary offer of an improved drink - that's the difference between real five star service and ordinary service). 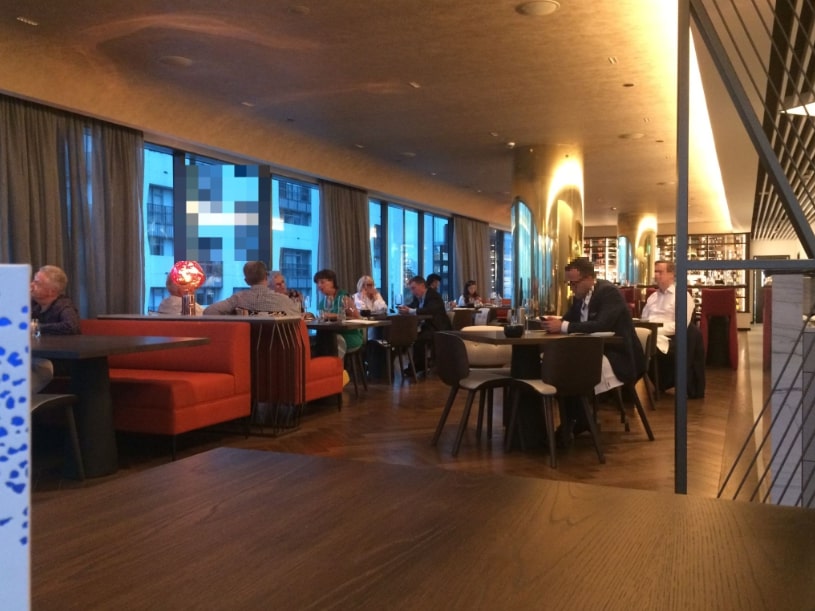 "Artichoke heart cooked in olive oil and fleur de sel" was an elegant presentation that attested to chef Marc De Passorio's accomplished technique with softening vegetables for consumption.  The star ingredient had been cooked and carved to reveal the melting "heart" of the vegetable, never mind its slightly fibrous stalk. Purple carrots, a chunk of turnip, and plump tender broad beans were all tenderly rendered, resting on a delicate artichoke puree. 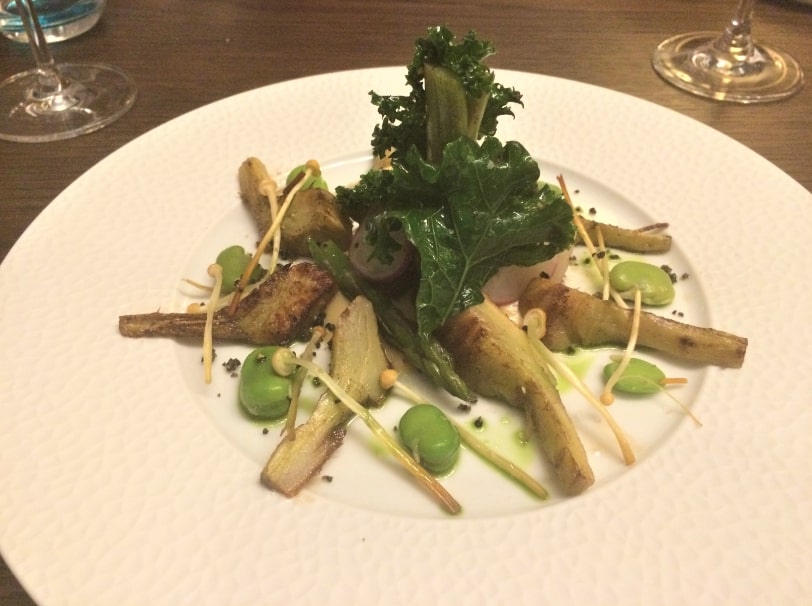 I've consumed no finer duck in NZ than the one reared and slaughtered for Harbour Society. De Passorio poaches it in milk, and the result is sublimely succulent, heightened further by a richly rendered fatty exterior. It is finished in manuka honey and some balsamic which makes the end-taste sweetish rather than savoury - as if in a bid to curtail too much perfection. 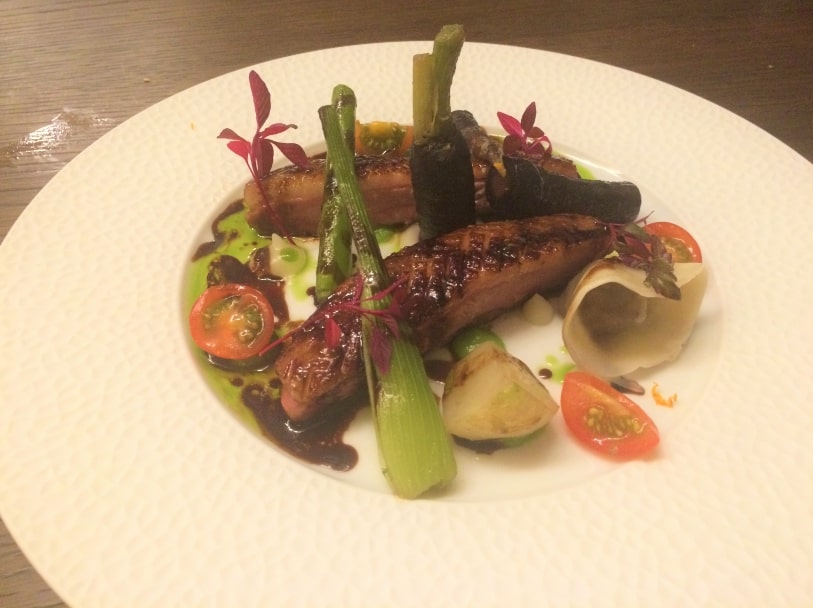 The vegetarian main course for my companion brings us to the scant attention the restaurant has given right from the outset outset to that haloed set. The basic understanding that a vegetarian doth not survive on vegetables alone, and that a dazzling variety of condiments and carbs in all conceivable forms and formats actually exists in the real world should you search for it , has not dawned upon HS's chef. My pal was given a presentation of roasted cauliflorets with little pools of green sauce (probably a cauliflower-cream-kale number)  and a variety of garnishes. It looked nice and he reported it wasn't bad, but I could clearly see that few vegetarians would think of it as a substantial main course. 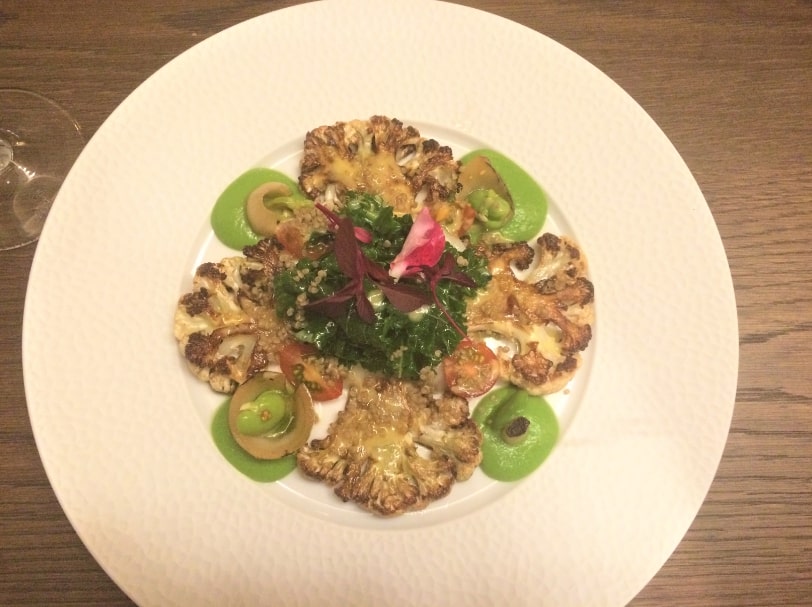 The tune and tenor were sweetened by the finishers. Apple tart was given a trippy spin - the basics were strongly rendered with a sharp apple compote on a firm biscuit base with little torpedoes of whipped cream for balance, but the textural zingers were  extraordinarily crisp bits of brunoised apple and the hidden surprise of popping candy. No such tricks were there, nor were they needed in a beautifully presented banana-muscovado-vanilla number - it just rode on the strength of a tried and tested blend. Mellow notes of caramelized banana, the cream of it, and bits of banana bread jousted with the full-bodied sweetness of muscovado sugar, flowing into the milder but chillier complement of vanilla ice cream. 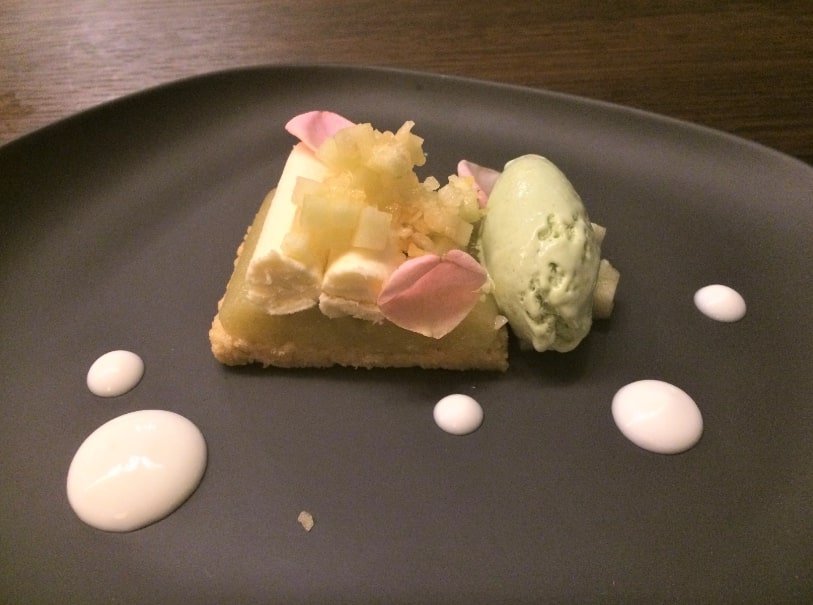 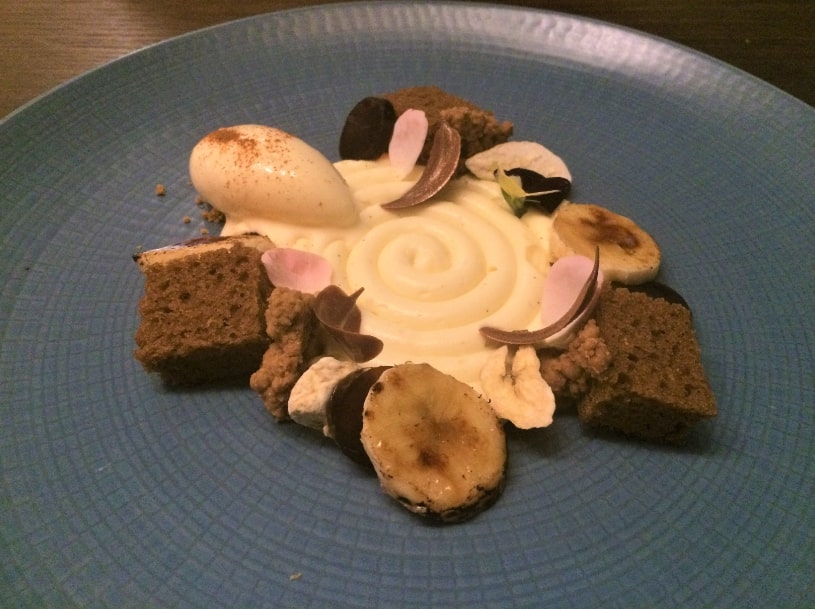 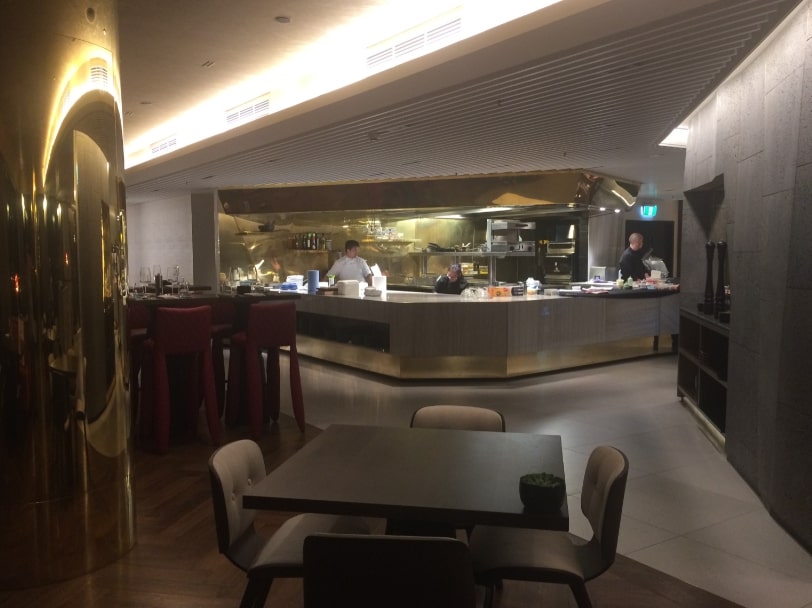 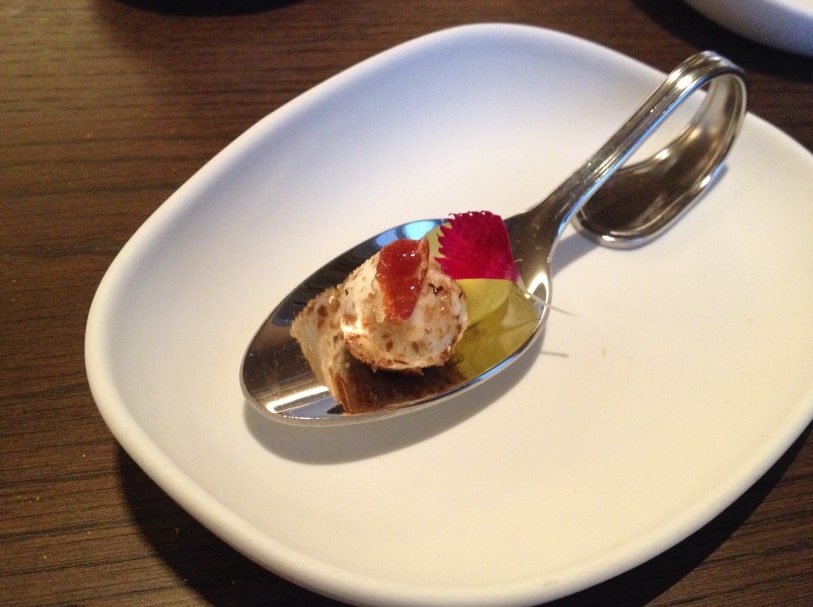 The second visit's best highlight was something not synthesized by Harbour Society but which they packaged superbly - $ 35 for a 500ml carafe of supple, dulcet and excellently fruity 2017 Grayling Pinor Noir - one of the best wine deals in any top restaurant around town - the liberal consumption of which helped to dull the edge of the food's disappointment.
The octopus dish is a reaction to two things - one, the challenging question : what spin will you put on tough cuts of octopus ? and two, the profound proverb : if you can't dazzle them with your brilliance , baffle 'em with your bulls***.  50 colourful "points" of food decked the sprawling presentation , with yellow and green citrus gels, little circles of peppers and tiny shavings of salmiak (salty liquorice) and unsurprisingly none of these could enhance the little slender cuts of chewy tasteless octopus ( even a sucker for luxury like Putin would not fall for this glamourous scam). 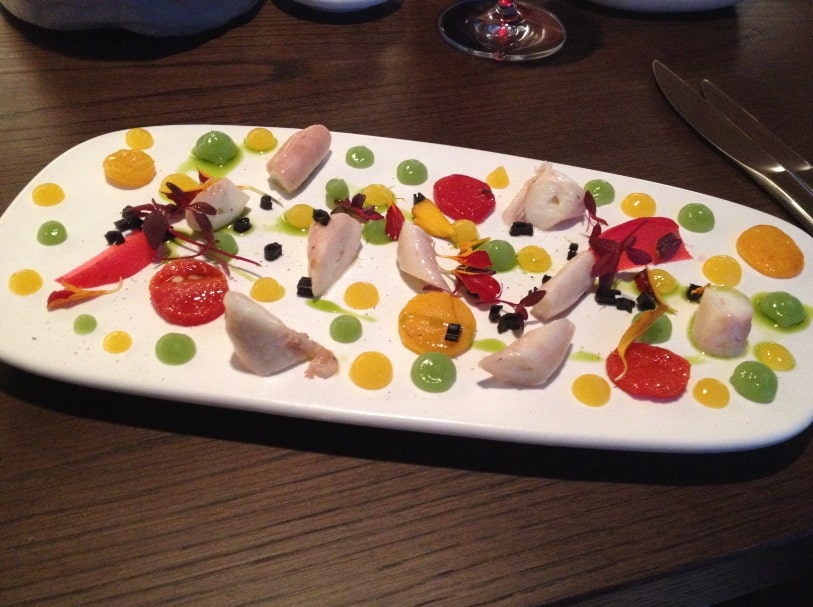 Service in this second innings was superb , pamperingly attentive and pleasantly solicitous. The unfinessed waiter from my previous visit hung around elsewhere, while other young gentlemen provided excellent hospitality, beginning with drawing my chair back so that I could sit down and then easing it forward, topping up water and wine with religious rigour and checking whether I was well looked after. I sat in another part of the restaurant but here too , the views from the large windows were of profligate dimensions. I derived an excellent vantage view of the kitchen and the constant impression was of half a dozen men (female staff are a rarity in this restaurant)  working with Zen-like composure - none of the bustle, voices and hellfires of an edgy kitchen. 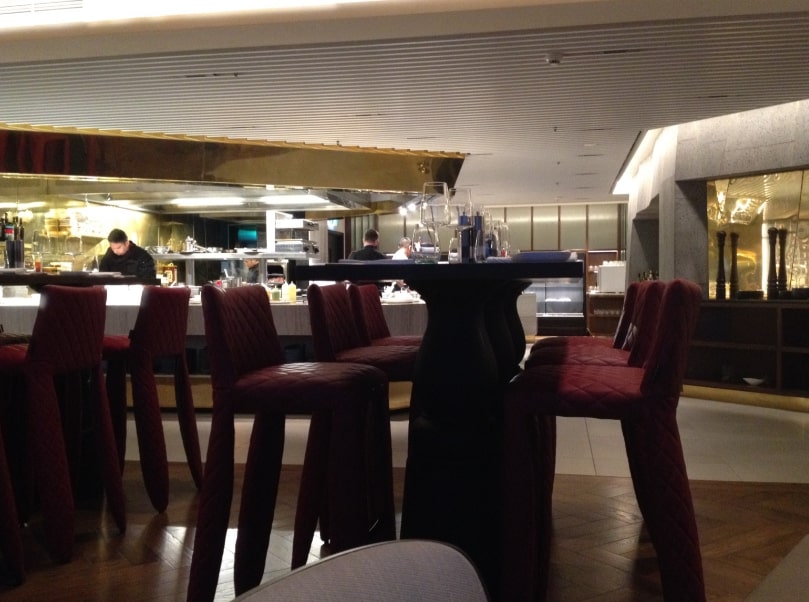 One could see effort the chef had put into jazzing up the scallop dish. Apart from a medley of little slices of vegetables, there was charred bok choy for smoke, kiwifruit for sweet whispers, avocado for tropical softness complete with a moreishly tart avocado jus that was a wonderful liquid counterpart of the best guacamole. Alas, the scallops, though finely rendered, were just anemic in flavour - this really is not Chef de Passorio's fault - his kitchen is just stuck in a country with useless scallops ! 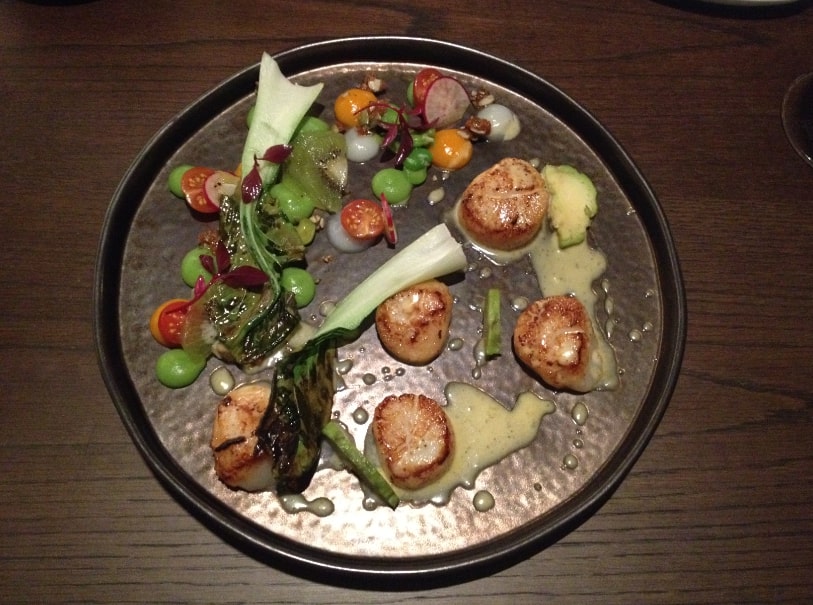 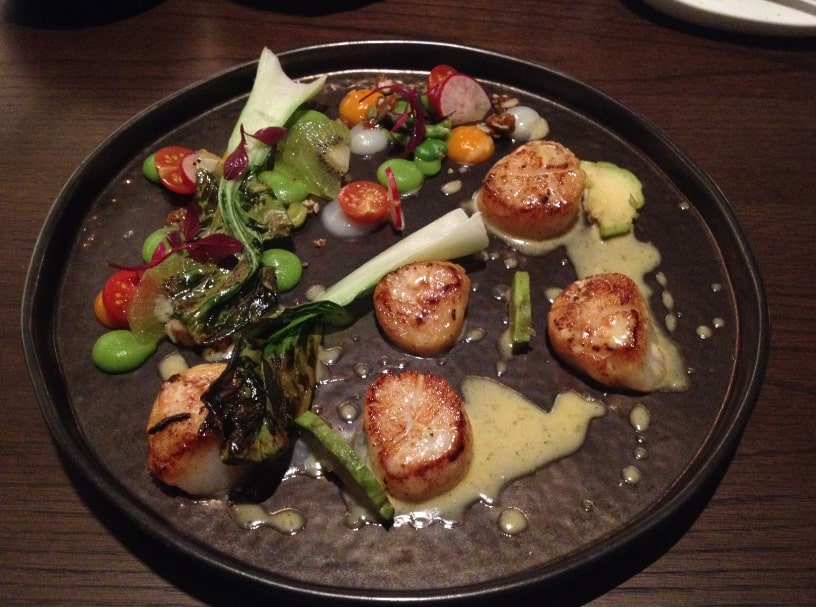 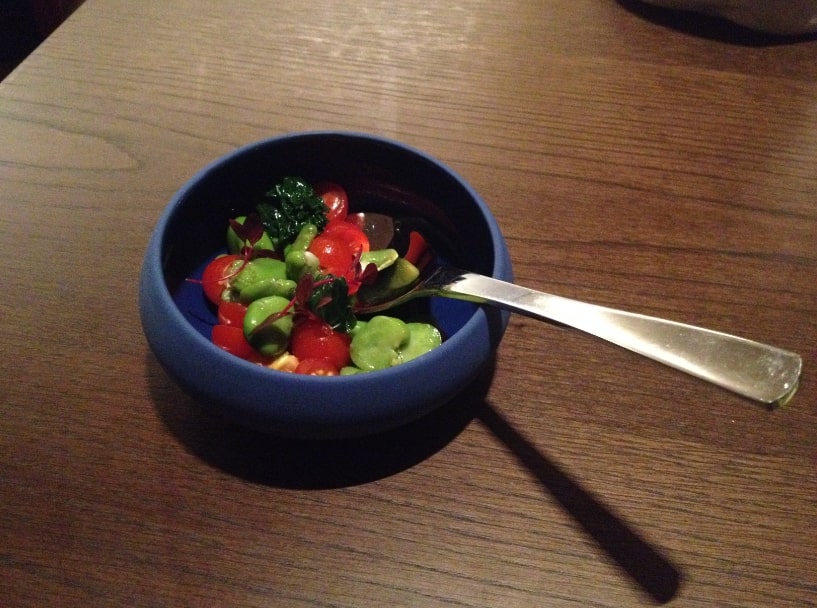 So often, when the top order fails, the day-saving batting is left to the middle-order, or in other words, the main courses. That evening, the match went the other way. The waiter asked me for the dessert but not for nothing do I attempt to continue the passion of gentlemen like A.J. Liebling. I asked for milk-poached fish and though the kitchen was closing, they had the sense not to drench it in chocolate sauce and dash it to my table. The Hapuka when it arrived was a wonderful example of a fish meant to appease those who do not like fish but are forced to eat it. 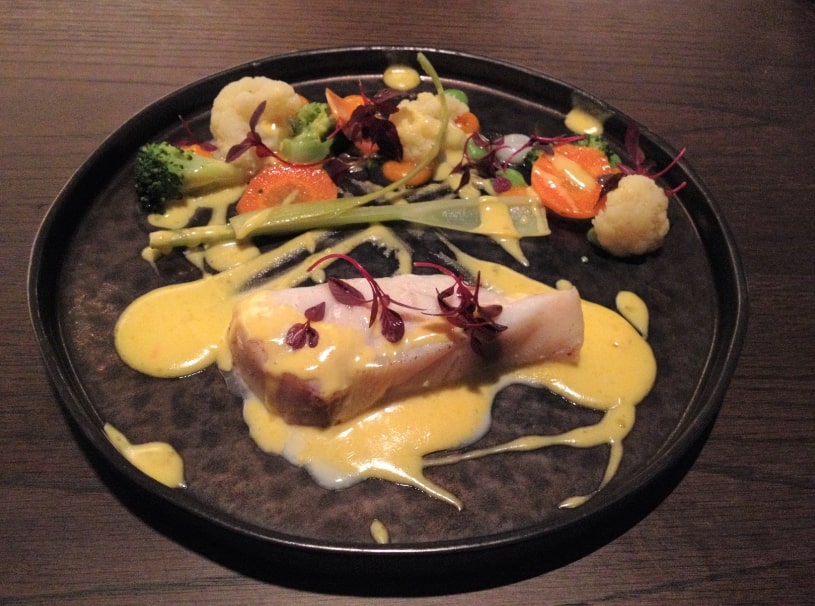 The fish, though not tough, was only a couple of fin-swerves away from breasting that mark. Poached to a state that transcends death, 'twas majestically firm and its fibres revealed a texture more seen in chicken breast. 'Twas almost tasteless, the inherent technique robbing it of salvages like a well-roasted exterior. A well-judged aioli sauce cut with lemon had little around for it to tie together. The bunch of soft vegetables which impressed me on the first visit were now wearing thin on their appeal - save for a few vegetal purees here and there, their seasoning was off, they almost always tasted simply steamed or plainly roasted rather than the other more sophisticated methods of delicious vegetable transformation and especially on this plate, did little to detract from the lackluster fish.
Even the dessert, previously impressive, had its wheels coming off. Valrhona Jivara chocolate cremeux was a chilled dollop of unmistakable quality but it di