PS: This was my first fine-dining meal in New Zealand - it was meant more as an elegant way to perk up that day rather than as a gastronomic tour de force, and my dish descriptions were more drawn out than ever at that time, as you will soon discover.

After having our visual fill of the beautiful blue waters and scenic esplanade that forms the Oriental Bay, my friend and I made our way to White House Restaurant for lunch so as to wallow in a "flash" experience, to use an NZ/Brit adjective. After intial puzzlement over the unflattering main entrance to a bar of a different name in the same building,we noted the discreet staircase outside which led upstairs. We ascended this and soon found ourselves in promised portals. At the end of a brief narrow passageway,at a reception counter there stood a tall young Frenchman (going by his accent). After being informed that we had a reservation, he requested the hand-over of our jackets ,and without asking our names for the reservation, led us inside the dining room. With rising anticipation of such mystically perceptive service,I was guided into a rather small space that elegantly stated its fine-dining credentials- prisitine white linen on the table,gleaming glasses and polished silverware. 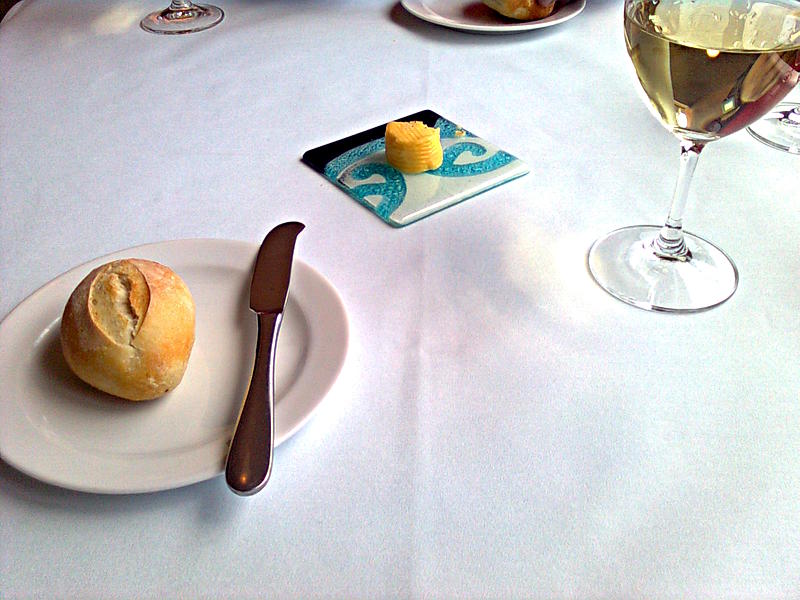 We were seated at window-side table that offered a generous sunny view of the aesthetic bay-side promenade. Electing to order off the bistro menu, a wish was also expressed to sample a white wine- Misha's Pinot Gris 2010. The waiter (the same and ultimately lone representative of the place's staff from the start to end of our meal)- asked us if we'd like to start off with some bread. A small shell of croissant-style bread with a square of butter was presented- and finished off with chomping that was never laboured.I later noted wryly that this offering was not gratis. The wine was exquisite- satiny smooth with the barest hint of acidity.

Though I didn't get to taste my companion's starter, it had exotically Asian ingredients that stoked my curiosty: Crab Raviolo, paw paw, coriander salsa & Thai inspired coconut sauce. I elected to try the putative pleasures of Slow-cooked "Happy pigs" pork belly. This latter dish was ensconced inside the sleek rectangular contours of a plate of dappled glass- its overall composition was beautiful enough to entice by sight alone. Framed by a bar of light mayonnaise at the top and one of mint sauce at the bottom,the flanks were formed by small squares of green jelly topped by a wispy-crisp meringue. At the center, juliennes of green apple and slices of lychee were sprinkled with crunchy bits of crackling- these crested the star player sitting quietly underneath- the pork belly. The afore-mentioned sweet accoutrements did not overstate their case and remained refreshing polite suggestions. The pork belly ,ably complimented by lightly spiced cashew-butter, had a softness and delicate fullness of flavour that reminded me of the same quality in super-fresh fried seer fish. Its taste and texture thus induced me to concur with the dish's title and suppose that the pig might indeed have been a happily gambolling and snoozing one. 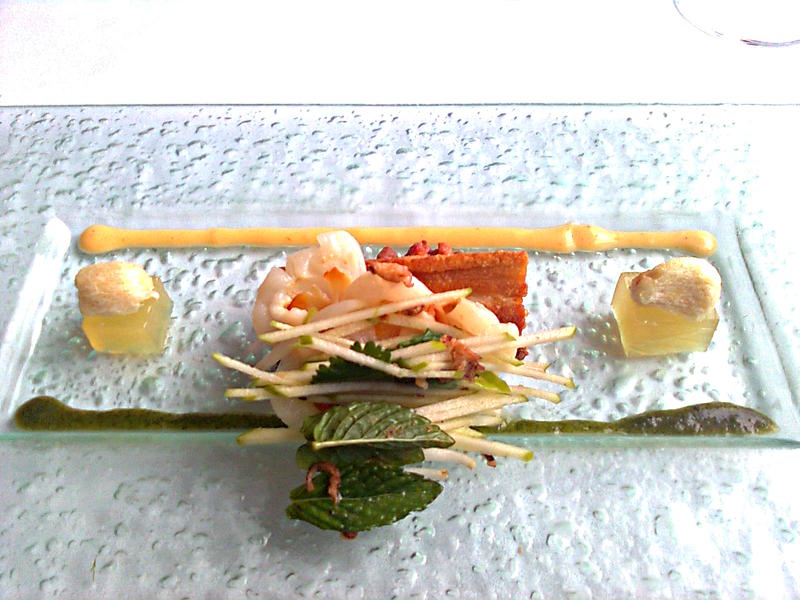 For the main course , my friend opted for Pan-roasted market fish  which was snapper that afternoon.The chefs had elected to accessorize it with a fetching cast: Florence salad,lemon curd & parsley powder. Mon ami expressed particular praise for the delectably lingering mouthfeel of the fish ,and flipped the fillet around to show me how well the product had been cooked. The chicken breast on my plate had a small outcropping of bone at the top and a tender body of meat that steadily diminished in size under the knife and fork. Unfortunately its associates: 'giant couscous' (each grain the size of a unit of salmon roe) and brunoised roast pumpkin, supported each other in carrying little flavour or texture. From a distance though, many South Indians might have confused the base of the dish- a square of green-striped pea puree, to be a plantain leaf.  Almond cream, again resembling an Indian chutney (I say "Indian" because there are any number of foreign non-savoury imposters going by the name of chutney these days) was spread close by - when the chicken was annointed with these former two, it created a pleasantly savoury appeal: the dish was neither a knock-out nor a disappointment. 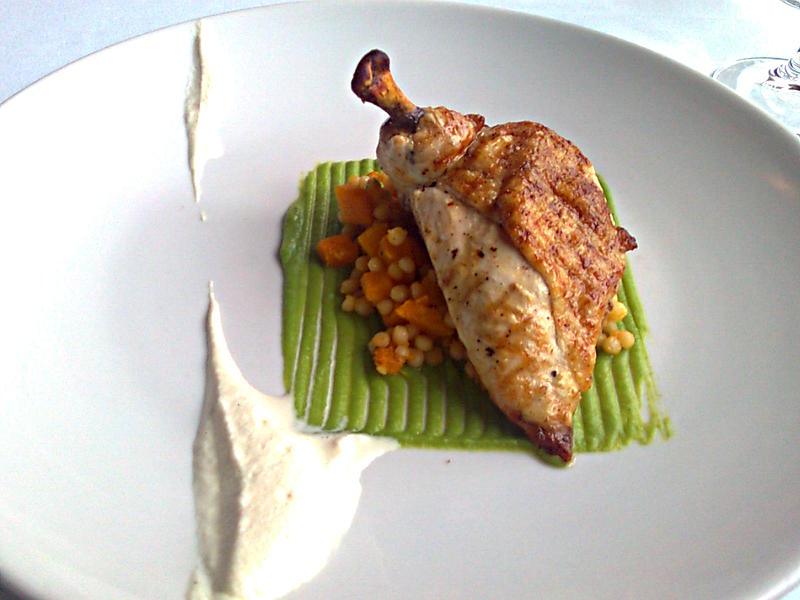 Through all this, I noticed that our waiter was not a constant presence in the background. Looking around us at the compact dining room that contained about a dozen tables,with the inter-table space not being commendably optimal, my biggest surprise during the lunch lay in noting how, during a weekend afternoon, for close to two hours after one o' clock, only three tables including ours were taken up during the greatest moment of occupancy. Granted that with such a limited number of patrons, the waiter wouldn't have a whole lot to do while waiting in the wings -but he retreated for generous tracts of time inside the kitchen. I briefly entertained the not entirely impossible suspicion that he was attempting the feat of being our waiter,maitre'd, and chef all rolled into one! Nonetheless,he'd epiphanize with a fair degree of punctuality when we would finish our dishes,and compliment us on the feeling of mutual satisfaction on seeing the empty plates. And he did ask us once during the course of the meal, about our state of fulfillment.

From what little I tasted of Valrhona chocolate pave,raspberry puree and mascarpone, I didn't conceive too high an opinion of it while  the dude across the table ,having the benefit of the dish in totality, polished it off and accorded his seal of approval. The other dessert was "Snow Egg" - a visually impressive creation with superb textural interplay inspired by Aussie masterchef Peter Gilmore, but its taste was good rather than outstanding. The first player in it was the center of attraction- a white spheroid having a vertical diameter of about eight centimeters. Its size ostensibly was admirable, the wispy feel commendable, with a faintly sweet taste ranking last in its list of attributes. "Egg-whites whipped with sugar and popped into the oven" was how our host described its synthesis. Tartly sweet granita nestled beneath this sphere, at the base the passionfruit 'fool' was a smooth gentle cream, whereas a troika of feather-light ultra-crisp meringues hid at the sides to give zing to the bite. 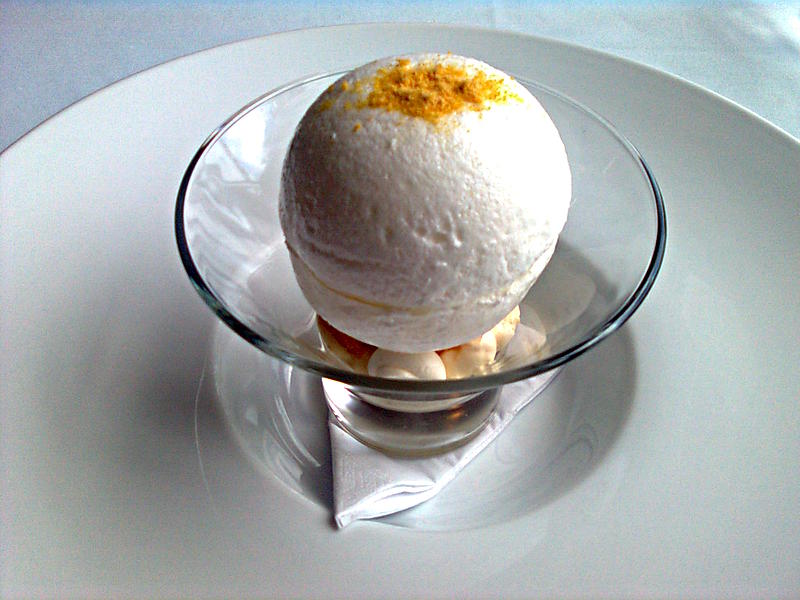 For a fuller understanding of the kitchen's pleasures, the tasting menu here is certainly an exciting proposition- what with selections like Heston's mock-turtle soup! Of the three premier restaurants I dined in that week, this was the only one that brought the "eftpos" billing device to the table instead of requesting me to come to the counter. In sum, when one considers the beautiful food, plush ambience, picturesque window-side vistas by day, and a confident French accent-sporting waiter, White House restaurant can indeed be said to have built up an inveigling case for further exploration of their purported treasures. 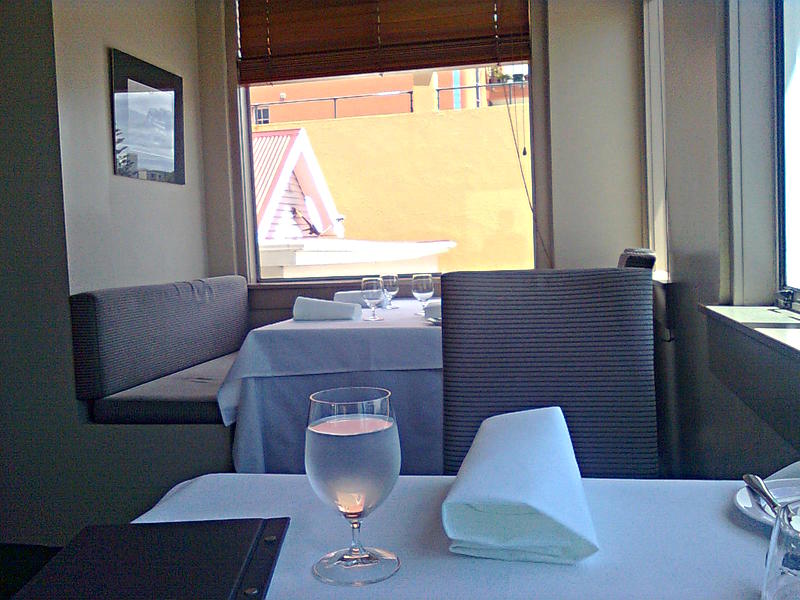 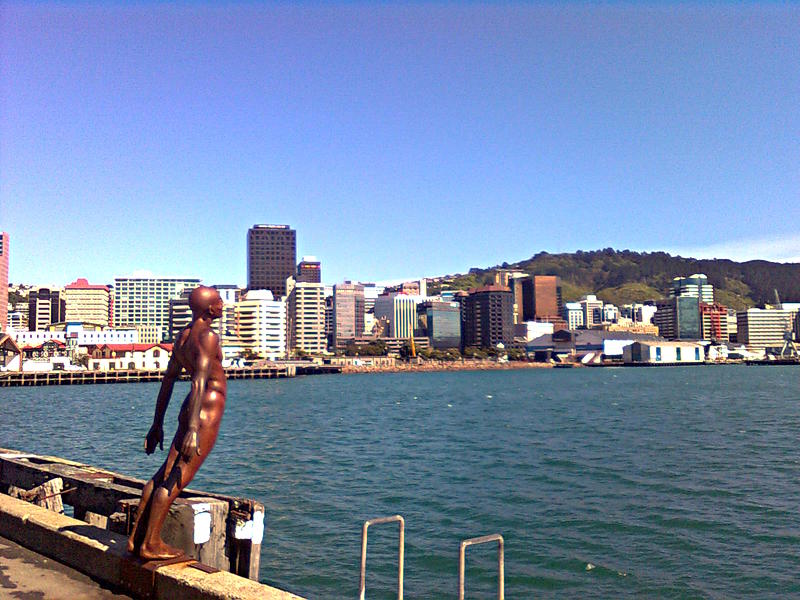