3 stars out of 5 (notable cuisine ,compromised by inconsistent service)

This place, on the lonely periphery of Auckland CBD, certainly “distinguished” itself in my mind on first contact. When I was walking towards its portals , I beholded on the first floor one of those waif-like figures with storm-blown hair who manage to parade through the fashion-ramps of this world. Half-sure that she was a mannequin stationed there to impress those on the very edge of couture, I was walking in when she surprised me by epiphanizing on the ground floor and producing sound to converse with her companions. The floor of the restaurant was the kind of roughly patterned concrete that industrial-chic places go for. Increasingly seeking the kind of good old luxury and cushiness that doomed old-world folks still expect ,I tried to seek out the maitre’d or manager who was would hopefully mollify me with a indulging smile and start the solicitous pampering. It was the bartender who shot me a query and on receiving the intelligence, tapped into a monitor and told me that my table was not ready yet. Fair enough - I was six minutes early.

I sat on a barstool and flipped through the wine menu while a couple canoodled at the counter. The barman tried to act busy, and I couldn’t have cared less if they thrust into each other while tumbling onto that hard uncarpeted floor. Fifteen minutes passed by, I had drained my Pinot Gris and yet there was no sign of any managerial staff at the front desk. Five more minutes and I would have walked out. But when a suit-clad, tall, semi-robotic, half-smiling maitre’d (who seemed better suited to enact an ambiguous CIA officer) eventually materialized at the last minute and asked me how I was enroute the walk to my table, the misguided diplomat in me didn’t tell him why he was remiss in his job. The restaurant (its unfocused Youtube promotional video notwithstanding) felt like more like a dark quasi-glamorous fine-dining place shoe-horned into an airport lounge. The high ceilings, leather-covered booths, sparse aesthetic, no tablecloth on minimalist circular tables and impersonal service might have had something to do with that impression. Adequate breathing space was some consolation

Some argue that presenting your best bet at first show runs the risk of unduly high expectations later. I disagree - knock-out your patron on the very first chance you get and there is a greater chance of him or her having a more favourable impression. You see the likes of it in certain tennis matches where the very first shot of a match is a thundering ace down the line, and the opponent ,already fazed, starts wondering whether he’ll ever be able to play a rally against the scorcher on the other side. But Chef Des Harris chose to issue a soft opening - salmon tartare set amidst similarly mellow pumpkin and butternut cut by lemon. I admit I can polish off a whole bowl of this mildly moreish “adult baby-food” but it’ll be wiped clean from my memory as the clouds of time go by.

While the chef didn’t achieve any distinction either with his next sashimi-style cut of kingfish, he marinated it in a kombu broth that had me impressed by how the sharp marine funk of seaweed had been transformed into a flavour that evoked the scent of sex - tang and savoury density canoodled in its shallows. Cloudy Bay clams at the center were succulent no doubt but their taste didn’t have me clamming up in sheer joy.

A few days prior to my visit to Clooney, whilst diving into NYT archives, I had looked up, out of curiosity, a review by Ruth Reichl on Lespinasse which had been given the highest rating of 4 stars. Reichl appeared flat-out impressed from start to finish - wondering how so many dishes seemed to taste intriguingly contrary to expectation. My evening’s second seafood course in Clooney mirrored this deception, albeit in a dysphoric vein. The Scallop tasted more of the grill marks emblazoned on it, Eel beignet keenly channeled woodsmoke and black garlic puree instantly evoked a prawn pickle commercially packaged in Kerala which I had regretting buying after tasting it. The kitchen’s experiment with Venison was only faintly amusing- fragile ribbons of meat slick with a tame blackberry sauce, and a puck of blood sausage which did nothing to enhance the dish. But Harris certainly knows to texturally cook pork - a sous-vide cut was velvety soft but drained of any character or taste. The same plate’s molasses, mustard seeds & a rosemary-celeriac puree were all ho-hum but the dish was handsomely salvaged by a perfect pork belly - the meat singing of soft richness, with an immaculately crunchy crust. 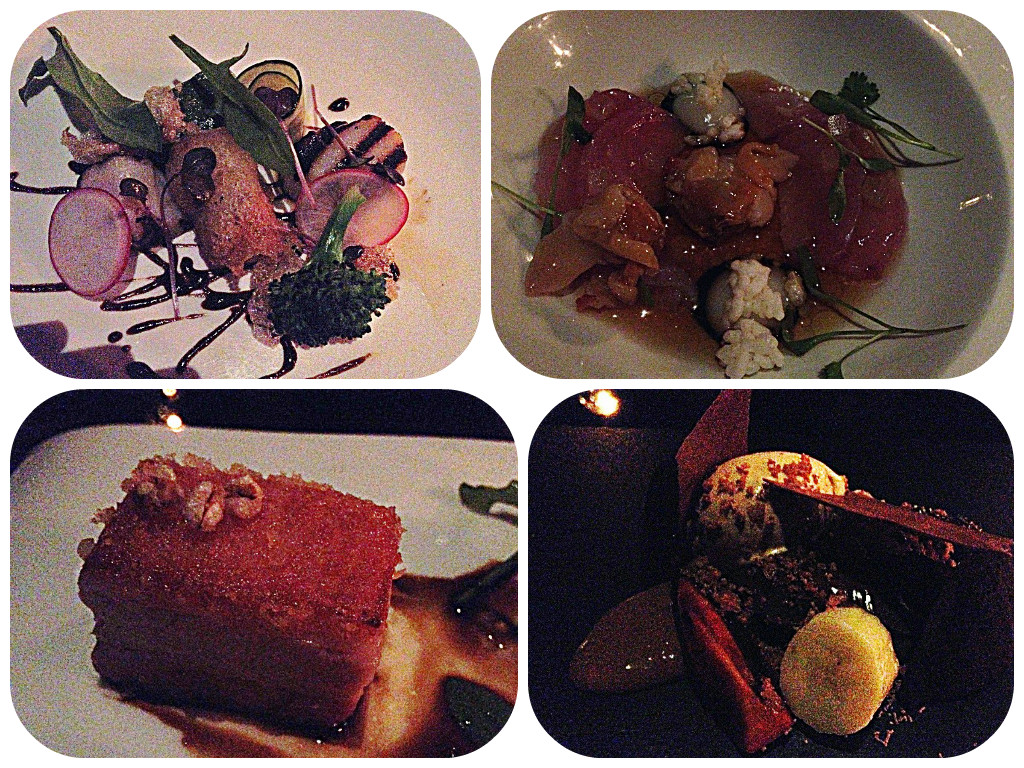 Service was soulless, save for a French lass who would smile and wend her way (in a loopily tonsillar voice) through a mildly uncertain, slightly disjointed but eventually accurate recitation of the dish ingredients like a newbie gingerly passing the driving test. Realizing that I was giving good feedback of my some of the dishes, she too felt the need to sprinkle in some banter and so she said “As we say in French “Bon Appetite!”. I daresay her youthful brightness made up for that terribly stereotypical utterance. The young man who principally, and when time permitted (they were a waiter short that evening due to sick leave) rather assiduously attended to my table, was methodical in his endeavour and would bookend his verbal nods with “Sir” in an unfailing routine that would do a butler proud. But he did one better than a butler by stocking an impressive memory for dish constituents. Still, everyone from the server to the maitre’d lacked a personalized warmth -also, I was never asked about my feedback for any dish - that made one suspect that passion or pride in the restaurant was not on their minds that evening.

The beef main proved to be a dish designed to convert those averse to this genre. Shapely cuts, thoughtfully parked amidst little rings of fried onion, were beautifully cooked - showcasing a heft and controlled savory fullness that is the exclusive preserve of this meat. Its finely roasted exterior was buzzing with salt and tang - the protein itself was the full package not needing much else. But three sauces still rounded it out - a steak sauce (tentsuyu with less complexity), a creamy hoot of a barbecue emulsion and the earthy perfume of a Jerusalem artichoke puree that home cooks would struggle to replicate. I learnt an interesting fact too - veal sweetbreads (at least as per “Clooney food“) taste very similar to top-tier chicken nuggets.

The same high was translated into the desserts. Fine-dining offerings presented in a glass have almost always flattered to deceive me ,but the first dessert here took the positive cake. A spoonful of its chilled top layer offered one of the most coolly delicious and arrestingly flavored blends I have ever tasted. Sorrel ice-cream was responsible for much of that wonder - it was made more inveigling by freeze-dried fig and licorice. Little cubes of dashi pear added delight to the bite. Similarly complex but less successful and rather stodgy was ‘Textures of Valronha Chocolate” with brown butter and caramel - their flavours and contrasts lacked zip.

So a late-stage acceleration lifted my impressions of this unassuming downtown restaurant. However the presentation and flavour packaging are disappointingly similar to Sidart’s (multiple ingredients arranged in a heap) with a paucity of imagination in the dish architecture. The epiphanies here, you will have noted by now, are in short supply but the consolations manage to make you feel that you have not been ripped off. Harris needs pack more highlights into his Tasting menu, and avoid the innocuous touches that seem like elegant fine-dining but are actually nothing more than exhibitions of prettified mediocrity. I didn’t have an issue with the tariffs charged for the evening ($150 per person for the food) but the overall experience makes little persuasion for one to return. This Clooney ain’t “The American”.