Indian Accent (Auckland) : Restaurant Review
2.75 stars out of 5 (Close to Good)
Mt Wellington, Auckland, New Zealand
Visited May to September 2017
It's Saturday night - you walk past places in this cluster of eateries which are mostly empty, the streets outside have no passers-by and you think it's a ghost-town. But then you step into "Indian Accent" and suddenly the buzz hits you - at least fifty patrons with a range of Indians and also Kiwis sprinkled in for angrezi tadka! pack the place eating talking awaiting orders, the place humming with waiters and hosts busily working the tables. You then understand why the parking is full outside. Mt Wellington, nay Auckland itself is a deceptive dame you gotta admit.
The place's name and even their title design is identical to India's top modern-cuisine restaurant in Delhi and NY, and while the joint here is miles way from attempting any avant garde stuff, Manish Merhotra were he to pop in here would be happy to see the throngs of customers.
I see 'White Russian' on the drinks list : not knowing when else in my life I'm going see a White Russian cocktail in a Indian restaurant in Auckland , I order it. The Hon'ble Big Lebowski and the Coen Brothers who re-popularized this kahlua-liquer-milk blend might not terribly mind the result - the cold coffee lover in me was satisfied while excusing the too slim current of liquor but what on earth ?! - the medium size glass at $10 is drained in five minutes and I'm hankering for more. Punjab (considering this is marketed as a Punjabi Dhaba) is the land of "Patiala Peg" - 90 to 120 ml of spirits in one glass instead of the infantile 30ml  - so alas this White Russian is only a Half Punjabi ! (yeah I know NZ rules - 30 ml per serve limit, but you can bend it like Beckham in a cocktail!).  I switched to KF large.
Chicken Manchurian , their menu proclaimed , "can only be called Yummy ! " - a kindergarten word I discourage in adult discourse. This Indo-Chinese starter, not found often in Kiwi-Indian joints, was requested "medium" for the spice quotient but still turned out to be spicy with the chilli muzzling most of the other flavours in the wok-fried, admittedly tender chicken morsels. 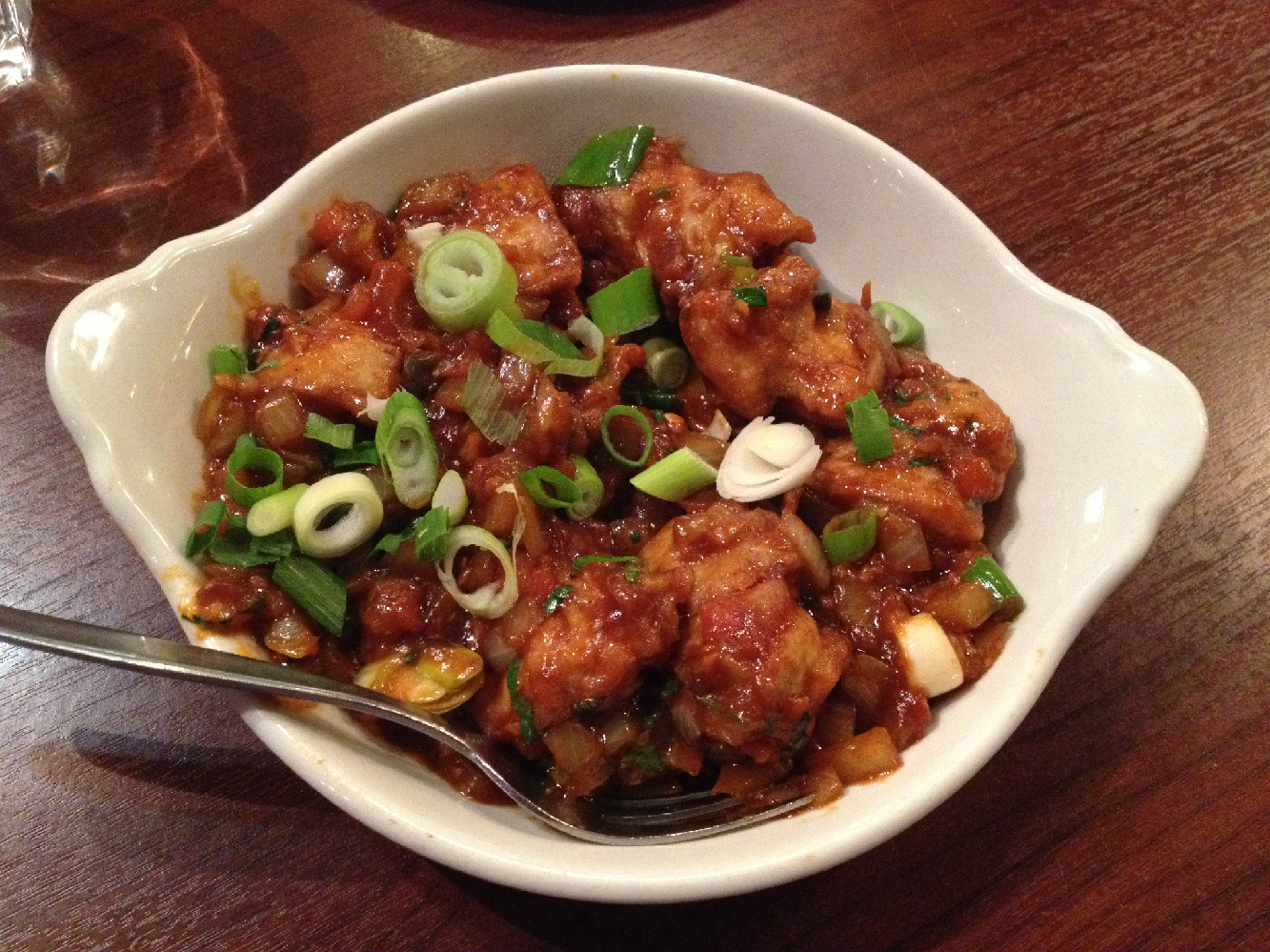 In "Butter Chicken", yes the chicken is beautifully succulent and flavourful but alas it is compromised by too much tomato in the creamy gravy - the most common mistake in cooking butter chicken. The best butter chickens are a creamy blast with yoghurt and complex spices in exquisite gentle balance while tomato is far in the background. Two different staff here were polite enough to ask me how the meal was, and were informed politely about the ups and downs. The menu described Amristsari Chicken gravy as 'cooked in yoghurt, straight from the heart of Punjab'. With a description like that, my heart couldn't help ordering it. Again there was soft juicy chicken, but the gravy was a generic onion-cream-garlic send-up evidenced anywhere and everywhere in countless indistinct versions.
On the upside definitely, the waitstaff here are briskly on to it - when one of my appetizers  took about twenty minutes to arrive in a packed restaurant (which is not that bad a delay), they, on two separate occasions, voluntarily apologised for the hold-up before the dish arrived. This pro-active service reminded me of India where a certain set of popular restaurants (which you'll discover all over the place once you work your way through) often have no shortage of waitstaff on the floor.
The joint occupies a large room with little chandeliers suspended from the high tent-like cloth-surfaced ceiling while the decor is deliberately themed along the lines of a "Dhaba" (an informal highway eatery) with red and yellow painted walls. There are little ethnic touches like a carved still-life portrait and a four-foot-high ornate jug, while the back of the room houses the bar with a row of counter-side seats.
Chicken Biryani  was a polite rice and boneless meat affair with none of the carnal appeal nor bursts of seductive taste that a wicked biryani generates, the solace being that the rice was slick-'n'-buttery. Amritsari Fish Fry had big chunks of tender fish but alas these had phantom flavour.
Sholay Kebab was easily better - a pleasant departure from the de rigeur tandoori smoke of the usual Indian-style chicken-kebab morsels. These were lusciously marinated chunks of succulent chicken with pleasantly rounded flavour, devoid of any spicy edge.
Multiple visits underscored the same pattern -  a well-run restaurant and a full-steam-ahead kitchen delivering a big menu of items while sparing us show-stopping epiphanies. You see  Lemon Honey Cauliflower on the menu and wonder how the chef will manoeuver the flavour profiles. It's a dish with inveigling potential which is lost in translation here. You get the lemon, the honey is probably there somewhere but the miscalibrated incorporation of a blackbean sauce sadly distorts the taste.
Shaarabi (Alcoholic) Prawns are not really replete with booze, but with a stiff drink you can enjoy these plump specimens even more. Resembling prawns tempura in looks and taste except for being pleasantly curled up like good ol' cooked shrimp, these have no special depth of flavour or succulence but make for undoubtedly decent appetizers with a thinly crunchy coating and liberal meaty body.
"Afghaani Mushroom" is a creamy beast of a vegetarian appetizer, with robust hunks of mushroom gloriously doused in perfumed cashewnut cream. If these mushrooms per se had deep umami, then this dish would ascended to Auckland's city-wide best lists. The kitchen alas could not make Cocktail Tikki - split green gram and potato mashed and roasted into cutlets - into something more inveigling than stodgy dull discs. It takes more talent to make a vegetarian appetizer like this something special , than does knocking out a delicious chicken tikka. But "Indian Accent" will be a keeper for me in this town, not because it dazzles with nuance , but because it runs a big bustling ship with cheery ability.
UPN
UPNWORLD welcomes your comments.